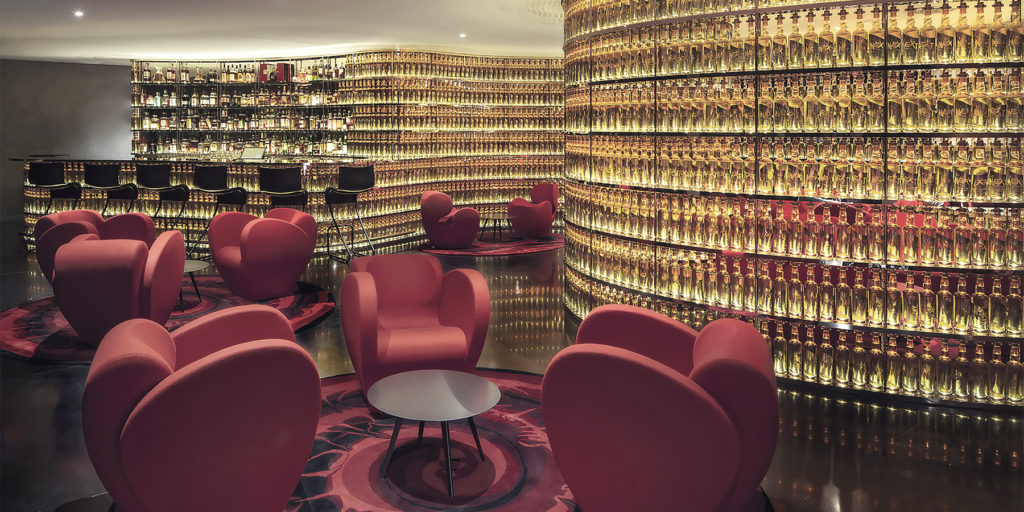 Thanks to a bold, modern update by Ron Arad, the Washington, D.C., landmark with a scandalous past has an exciting future. 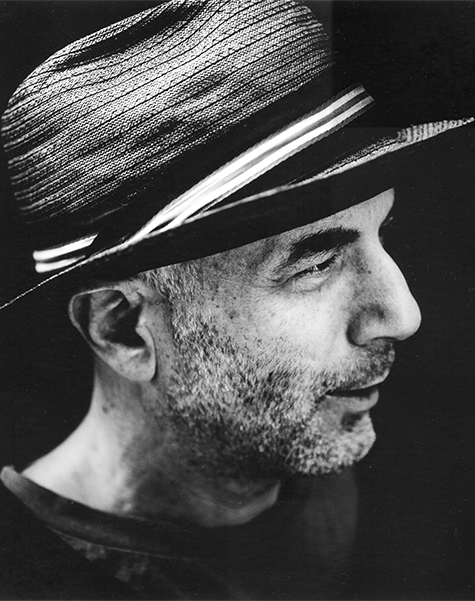 October 3, 2016Israeli-born, London-based designer Ron Arad, who’s known for his sinuous forms, masterminded most of the new public spaces at the recently reborn Watergate Hotel. The iconic Washington, D.C., hotel is part of the mid-century modern complex made famous by the Nixon-era scandal that bears its name. (portrait by John-Davis). Top: Arad conceived a curving wall of 2,500 glowing whiskey bottles for the hotel’s bar. All photos courtesy of the Watergate Hotel, unless noted

In the current election season, we’re following with equal parts curiosity and concern the news from the White House and the Capitol — and the antics of those competing to occupy them both. If there’s one building in Washington, D.C., that speaks more than any other to the lengths ambitious pols will go to win elections, it’s the Watergate.

This all-white, futuristic complex, notable for the seductively curving lines of its design by Italian mid-century modernist Luigi Moretti, attracted attention from the moment it opened in 1965 on the banks of the Potomac River. It wouldn’t become truly famous — or infamous — however, until Richard Nixon’s henchman broke into the Democratic National Committee offices housed there during the 1972 presidential election, giving rise not only to the scandal that takes its name from the building but also the “-gate” suffix that has affixed itself to nearly every political brouhaha since.

Now, nearly 45 years on and a boatload of owners and developers later, the complex’s hospitality arm, the Watergate Hotel, has received a new lease on life, thanks to a $125 million renovation overseen by Israeli-born, London-based industrial designer and architect Ron Arad. Perhaps best known for Tel Aviv’s opera house and Design Museum Holon — whose undulating forms could be seen as pushing the Watergate’s curves to their limits — Arad rose to prominence stateside thanks in large part to his furniture designs for the likes of Cassina, Cappellini, Kartell, Moroso and Vitra, as well as his 2009 solo show at the Museum of Modern Art in New York.

For D.C., Arad’s studio — which has also created schemes for hotels in London, Madrid and Rimini, Italy — spent several years reimagining the sinuous, columned public spaces of the hotel, including the lobby, bar and restaurants. (An in-house design team affiliated with the hotel’s owner, Euro Capital Properties, handled the 336 rooms.) The results capitalize on the original architecture’s Swinging Sixties sensuality and swagger, adding a contemporary and highly polished industrial-chic layer atop it. The new spaces are unequivocally stylish, and there’s nothing scandalous about that.

Here, Arad lets 1stdibs in on the inside story behind the Watergate’s renewal. 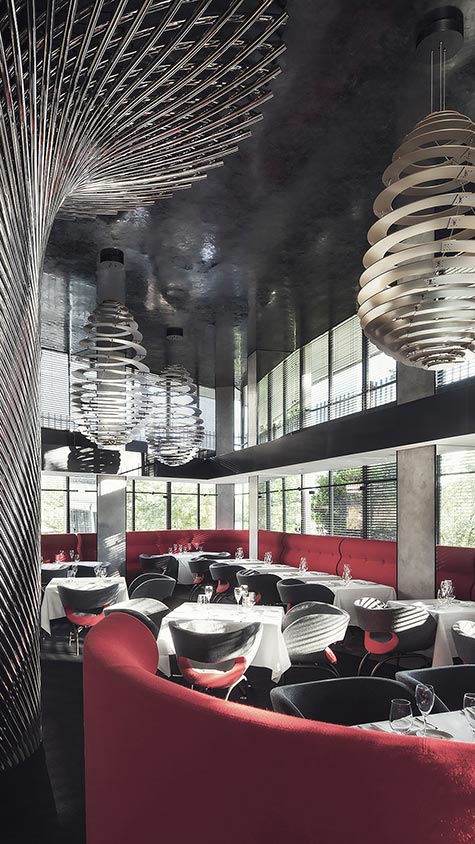 Arad custom designed all the furnishings and fixtures in the spaces he oversaw, including the formal restaurant, Kingbird, where spiraling copper chandeliers hang from the double-height ceiling. The dining chairs are a variation on the seating he first created for his Victoria and Albert collection for Moroso.

When we were approached about the project, we knew we had to take the job because of the Watergate scandal. How can you say no to the scandal?

We didn’t do the rooms but only the public spaces. Our scope ends in the lift lobby and the lifts themselves. We also redesigned the font used for the whole project, basing it on that of Nixon’s typewriter, with a bit of distortion.

The hotel is in a building designed by Luigi Moretti, an Italian architect, and it is a landmark — it’s a landmark in the legacy of D.C. and an architectural landmark. It has its look and its time.

I wanted to do something to the building without doing a pastiche; I didn’t want to do a period piece. But at the same time, the building is the context you’re working in, so I took the curvy lines, the sort of graphic layout of the building and the geometry of the floor plan as a starting point and then translated that into my own language, to use the curves for circulation routes, for example.

There’s the Potomac River right there, which plays a part, too. And the hotel is part of a bigger complex, the whole Watergate development, which is the immediate context for the hotel, in the same way that if we were building in the Alps, then the Alps would be the context. We’re not historians; if the reference is useful to us, we use it.

The most important inspiration in any of our work now is — surprise, surprise — other projects we’ve done: ideas and thoughts we’ve been developing but haven’t used yet because we’ve been waiting for the right time, or aspects we’re adapting and evolving from one project to another.

If you look at the foyer of the Tel Aviv Opera House, for example, you see something we did with bronze tubing, a whole wall of it. We changed the scale of it and used it again at the Watergate in the lobby and restaurant, stacking bronze tubes to sort of be like the contours that make up the building. 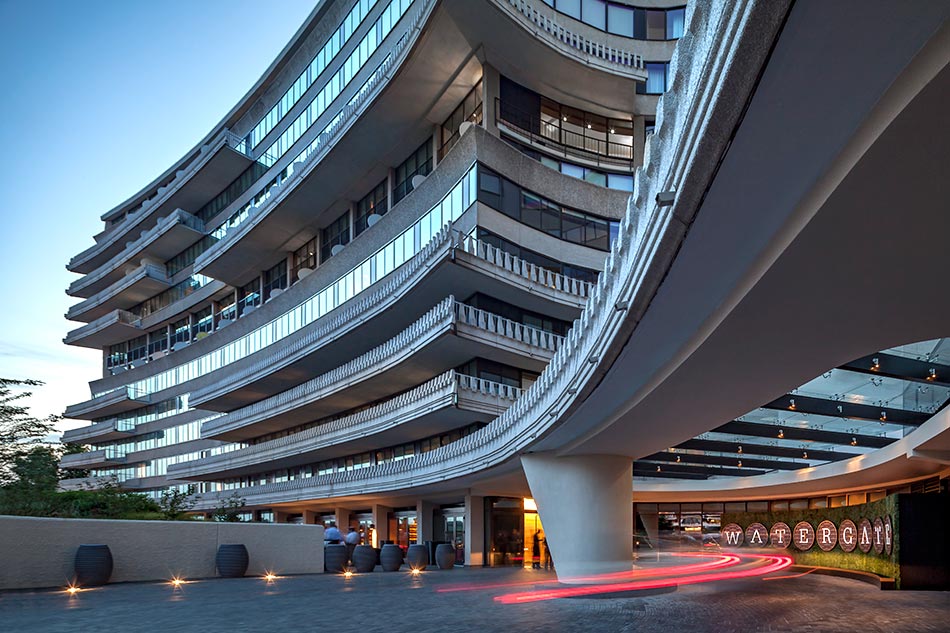 The Watergate first opened in 1965, making headlines with its iconic modern design by Italian architect Luigi Moretti. Less than a decade later, it became a symbol of the abuse of presidential power that brought down Richard Nixon. 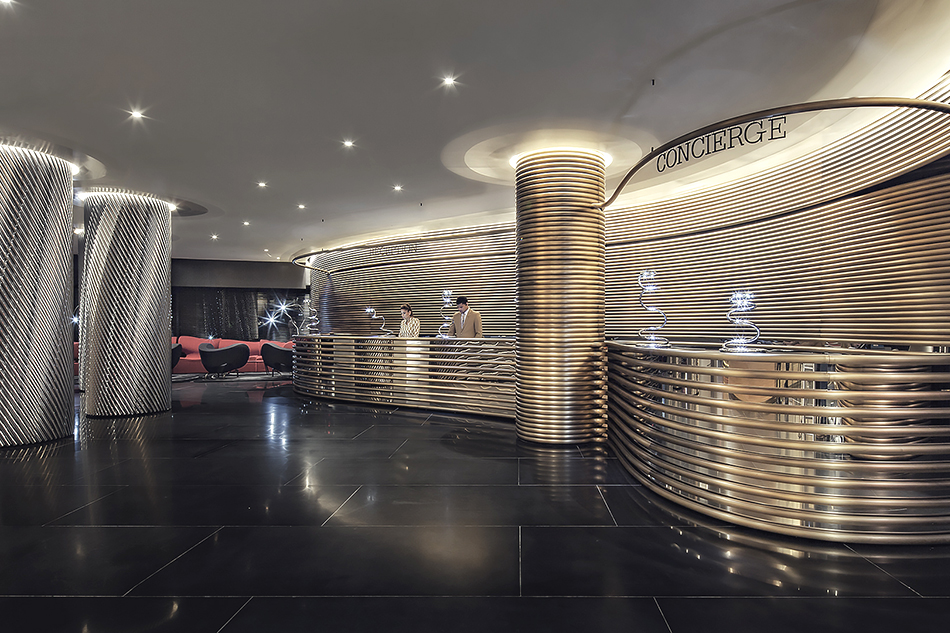 In the hotel’s lobby, Arad clad walls, columns and the reception and concierge desks with bronze tubing, which reflects onto the polished edges of the black-granite floor. 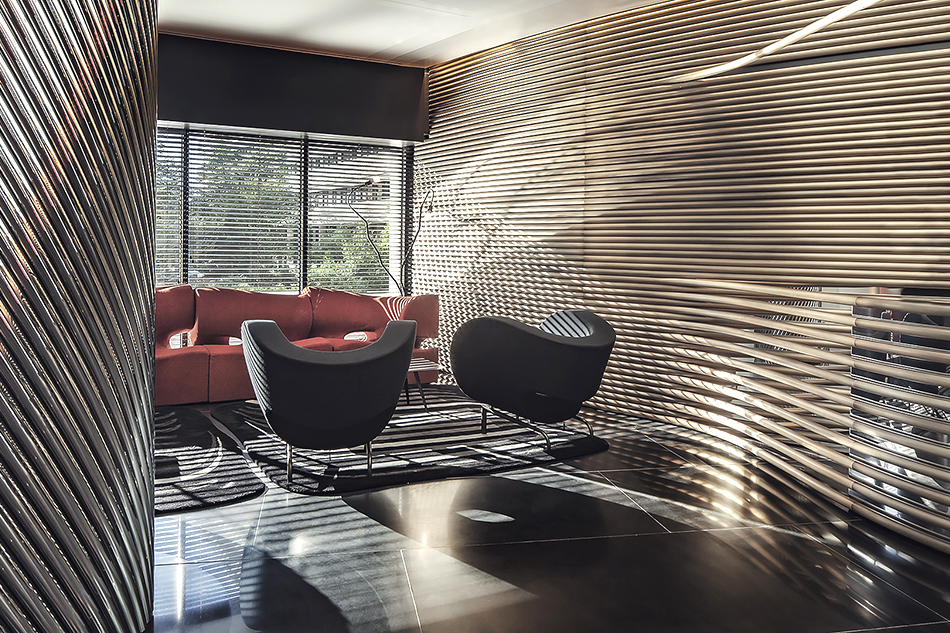 Arad’s use of bronze tubing at the Watergate is similar to something he first tried at the Tel Aviv Opera House. 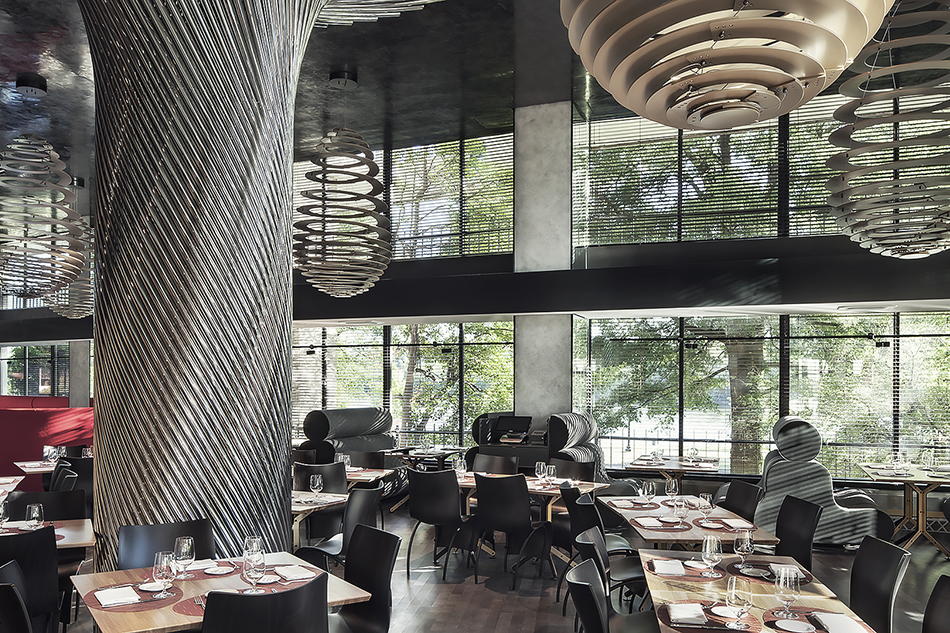 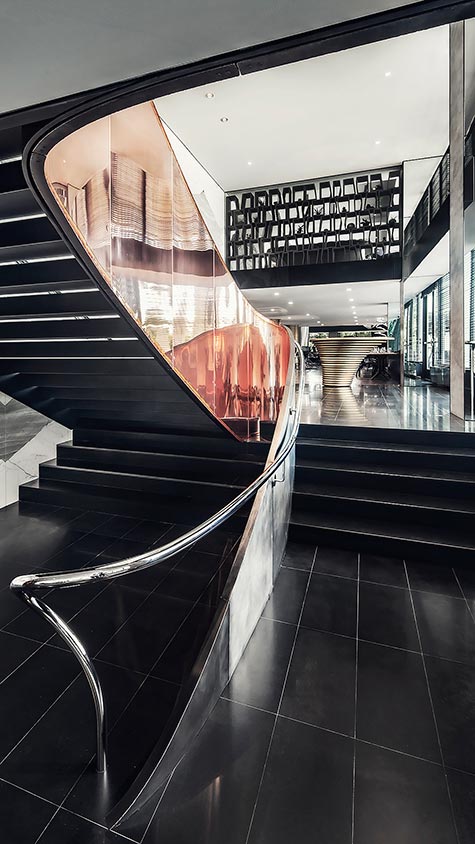 Arad covered the staircase in the reception area of Kingbird in copper. The restaurant’s host stand sits at the end of the stairs, with the area above housing the hotel’s library.

We used bronze where we could — for example, on the columns, which we covered with spiraling tubing — but then we also used wood, which is in conversation with the bronze hue. We did bronze anodized aluminum for the big chandeliers and a copper staircase. In the bar, we also used whiskey bottles as building bricks.

For the soft furnishings and upholstery, there is a lot of red and black, which works well with the hard materials. And then there’s stainless steel, which acts as a chameleon, reflecting everything else.

This building has very low ceiling heights, so we developed a system, both in the ceiling and the granite flooring, of gradation of polish. It’s very reflective near the walls, and then it goes matte toward the central area, and as a result the walls are actually reflected up and down on the ceiling and floor, which makes them look taller.

The whiskey bar and the whiskey labels that we designed to go inside the bottles. Normally labels go on the outside of the bottle, of course, but here we did them in stainless steel and slipped them inside each bottle.

The place is called the Next Whiskey Bar for the Bertolt Brecht song, which was later covered by the Doors and David Bowie, and the carpet is emblazoned with a lyric from the song: “Show me the way to the next whiskey bar.”

We did everything. Everything you touch and see had to be made. The thing is: All the things we brought in for the hotel, to my knowledge, had to be made in Europe, so they had to be designed to be transportable. I wish I knew of places in the States. We had to talk our clients out of ordering stuff cheaper in China, and I’m glad Europe won. The wood pieces were done in Austria and shipped to America; the soft furniture was made in Italy and shipped; the rugs were made by a Spanish company. 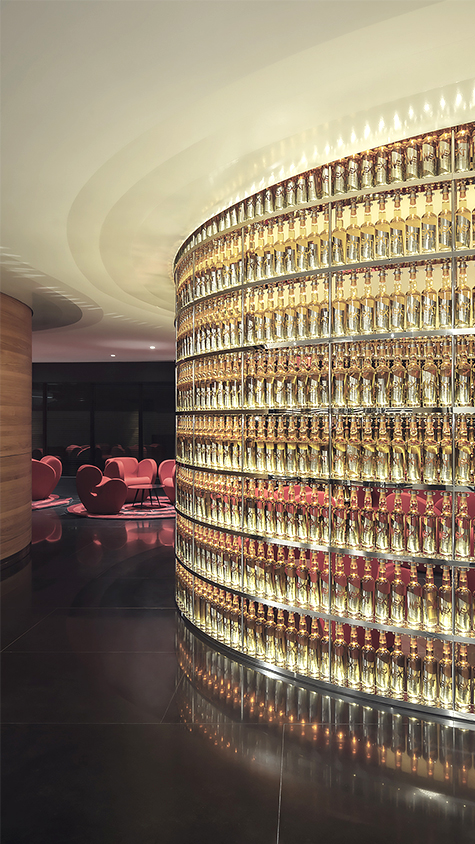 Rather than placing something printed on the outside of the whiskey bottles used in the bar’s walls, Arad designed stainless-steel labels that were slipped inside each vessel.

I especially like the Watergate chair we designed. It’s a soft dining chair that’s created for the space and done by Moroso, who I work with all the time, so it came about very easily.

We didn’t incorporate technology in a big way exactly, but there’s a lot of technology in how we produce our designs, and the more sophisticated technology gets, interestingly, the less technological the product looks.

I start everything by sketching by hand, and then we draw it with a computer, and then it gets laser cut or bent by a CNC [Computer Numeric Control] machine. Technology helps us a lot in producing these things, to produce a lot quickly and more accurately — not that there was anything wrong with handmade things, but technology is a great tool for us.

Some of the furnishings were purchased by the clients at an auction of my work in Paris, and I’m very happy they’ve ended up here, in a place that I had something to do with.

One of my Orchid chaises, which is a vacuum-formed polished aluminum piece in red and silver, can be seen on the level of the Whiskey Bar.

Works by Ron Arad on 1stdibs 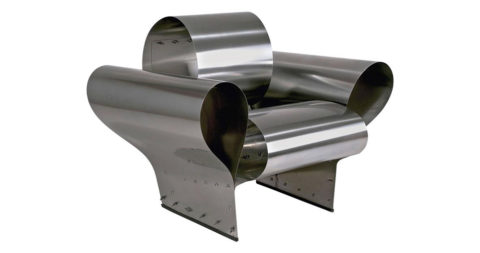 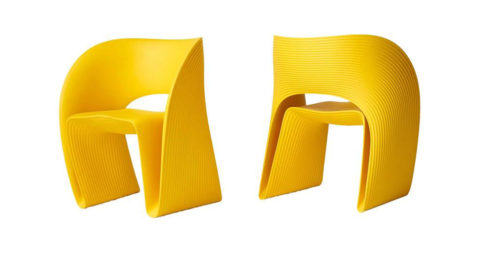 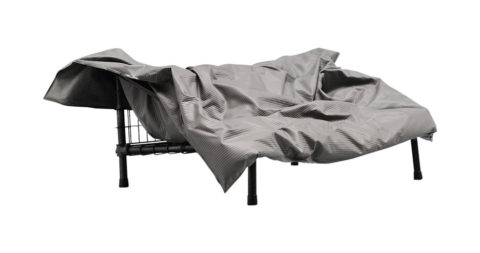 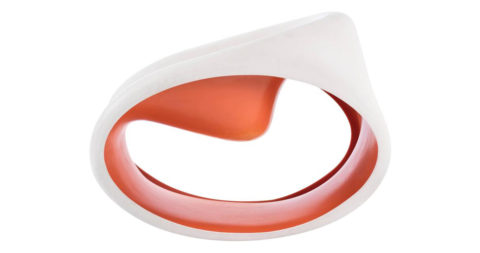 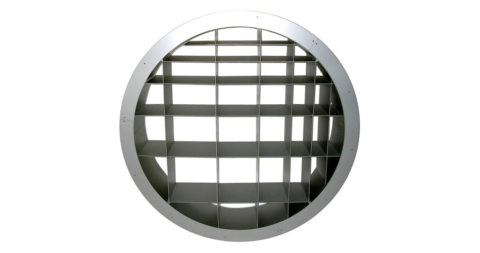 SHOP ALL RON ARAD ON 1STDIBS