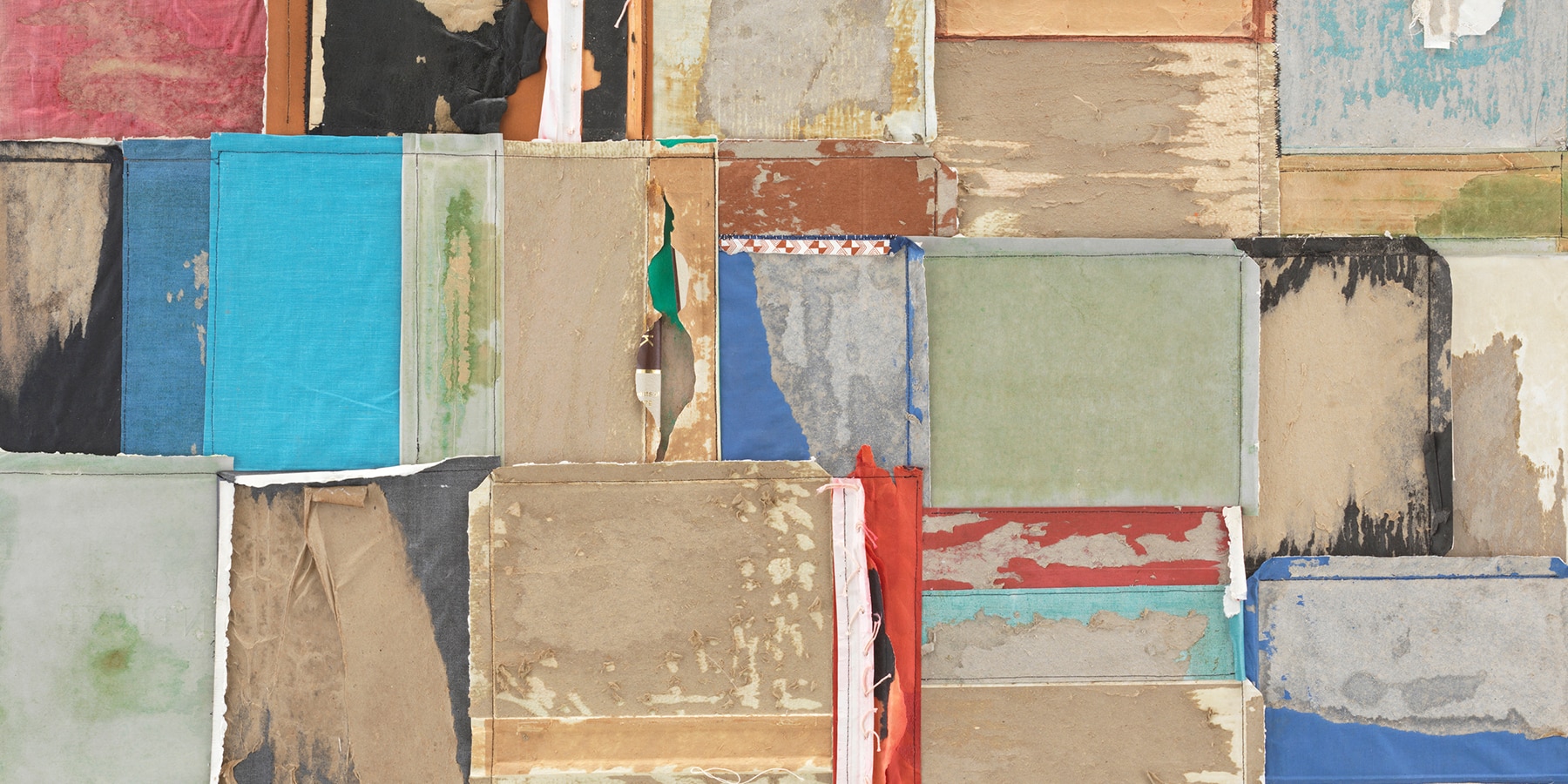 The Indiana-born artist deconstructs law books and encyclopedias to create geometric works that raise questions about inequality in U.S. courtrooms. 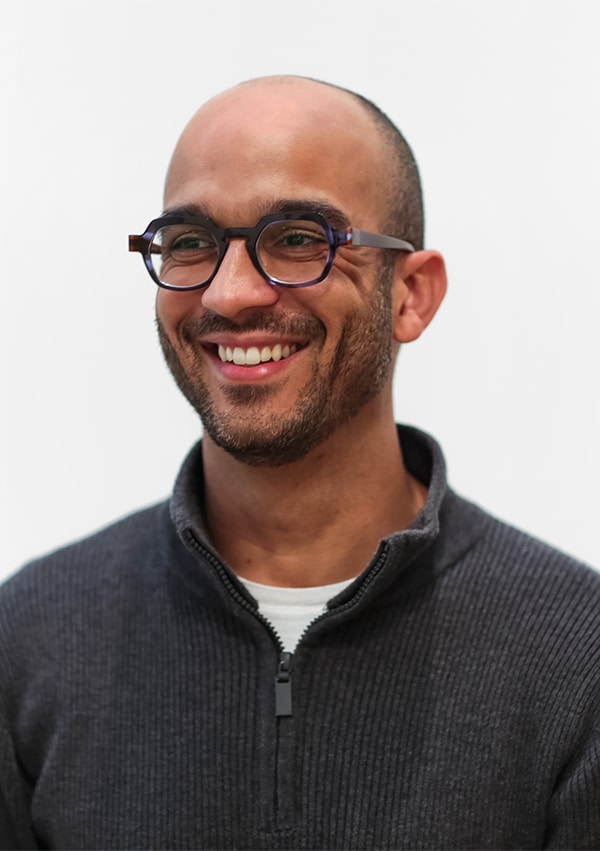 Samuel Levi Jones’s New York gallery exhibition comprises artworks he created out of encyclopedias, African-American reference works and law books, some of which come from states where the specific cases of police brutality against black Americans the works allude to occurred (portrait copyright the artist, courtesy of Galerie Lelong New York). Top: Detail of Burning all illusion, 2016 (image courtesy of Galerie Lelong).

The multi-panel Talk to Me, by Samuel Levi Jones, is a patchwork of rectangles in varying hues of beige, olive, taupe and terra-cotta. It covers an entire wall, floor-to-ceiling, at the New York space of Galerie Lelong, where “Burning all illusion,” an exhibition of the artist’s abstract constructions, is on view through January 28. The monumental minimalist grid could be read as a painting from a distance. But up close, the units are clearly pieces of weathered cloth, some with amorphous  gray cardboard shapes clinging to their surfaces and all sewn together along their edges and mounted on panels. The fabric, in fact, comes from dismantled law books, skinned from the inside of their hard covers and bindings and assembled into a composition that suggests a towering abstracted library void of text.

In November, Jones spoke to Introspective at his studio in Chicago, where he was completing works for this, his first solo show at the Chelsea gallery. Through these pieces, he explained, he is investigating the monolithic authority of the law “in terms of who benefits from it and who doesn’t.” Referring to its punitive application to African-Americans, he noted, “All these men are put in prison for years and decades, then even exonerated with DNA tests, while that young guy from Stanford caught in the act of raping a girl gets a slap on the wrist.” Two new works in the show made from a set of Ohio law books are titled Malissa and Tarika, after two women who died at the hands of police in that state.

For him, the process of eviscerating the books and restructuring their components into another kind of system is both cathartic and meditative. When he began deconstructing sets of books all covered in the same-color material, he was fascinated to find that the material on the inside of the covers varied in tone, and he likes how Talk to Me could evoke a constellation of complexions. “Like the old saying ‘Don’t judge a book by its cover,’” explains Jones. “When you break it down and get past the surface, you expose the inside to see what’s within.”

Samuel Levi Jones’s works from 2015 and 2016 are on display in “Burning all illusion,” his exhibit at Galerie Lelong, in New York. Photo courtesy of Galerie Lelong 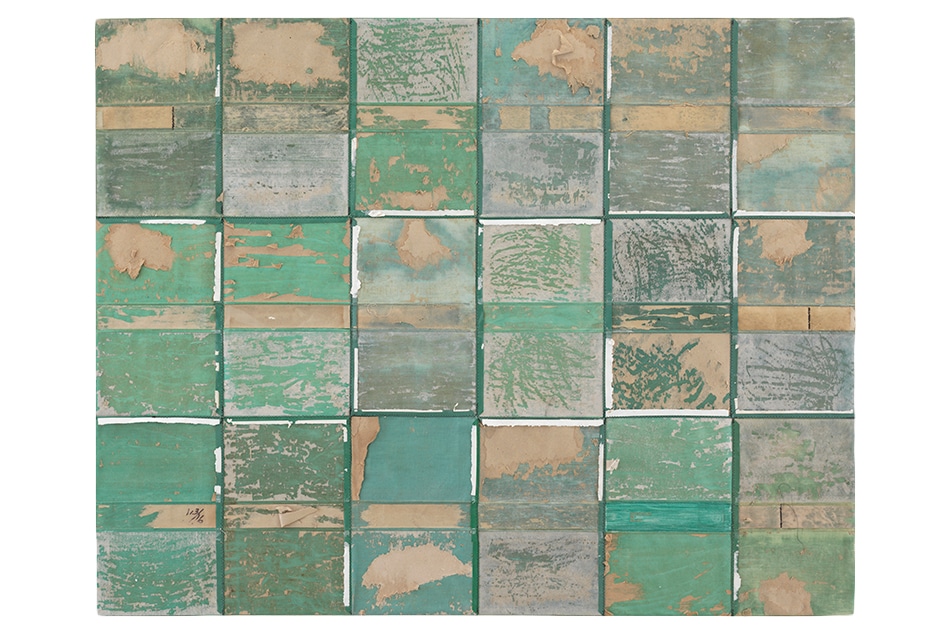 Selective Proof of Facts, 2016, is made of pieces of deconstructed law books and African American reference books on canvas. Image courtesy of Galerie Lelong 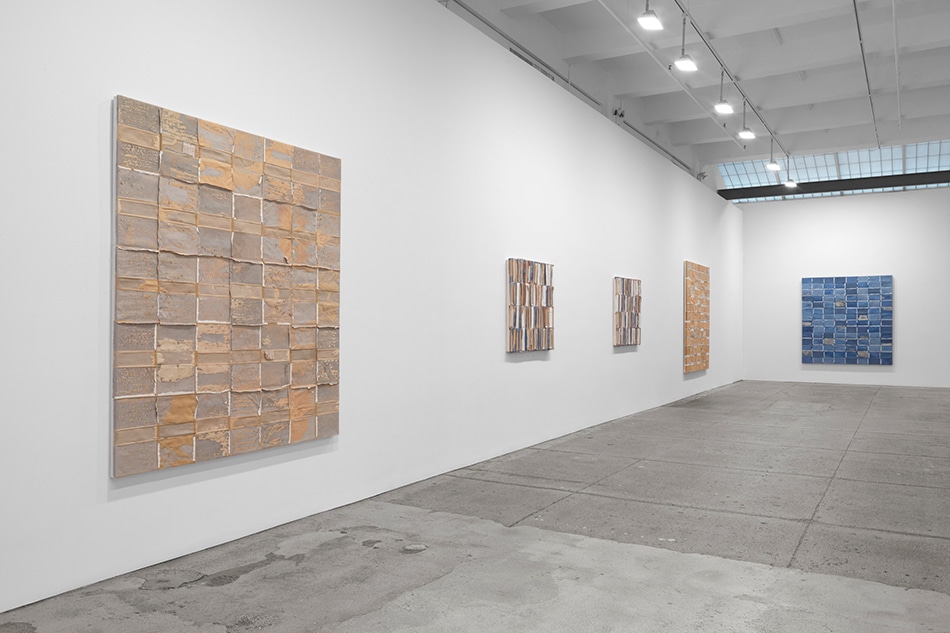 The works in “Burning all illusion” incorporate parts of books on black history, law and higher education. Photo courtesy of Galerie Lelong 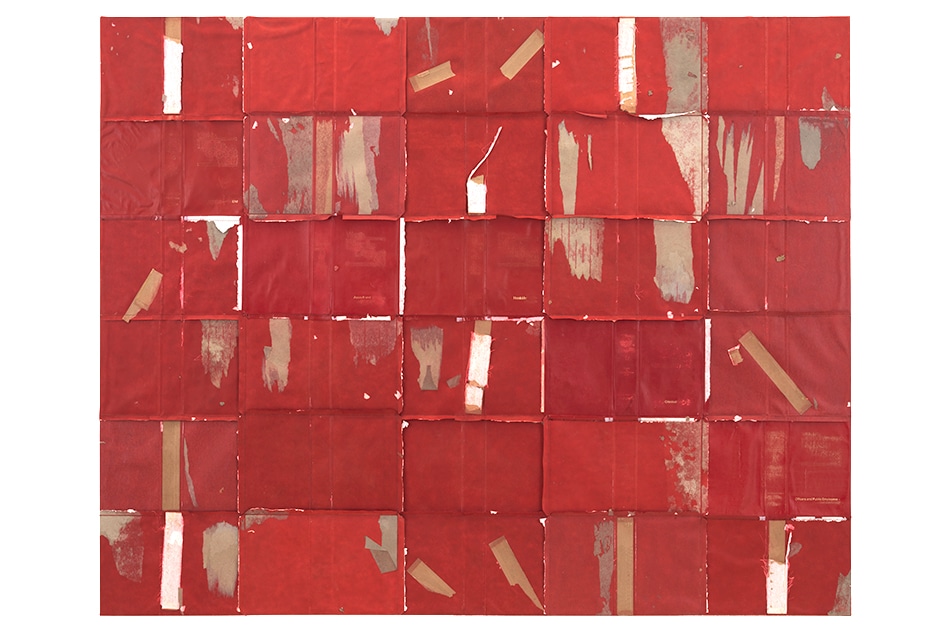 Joshua, 2016, is made of pieces of deconstructed Illinois law books on canvas. Image courtesy of Galerie Lelong

The 2015 exhibition “Samuel Levi Jones: Unbound” was at the Studio Museum in Harlem, which awarded Jones its Joyce Alexander Wein Artist Prize in 2014. Photo by Adam Reich 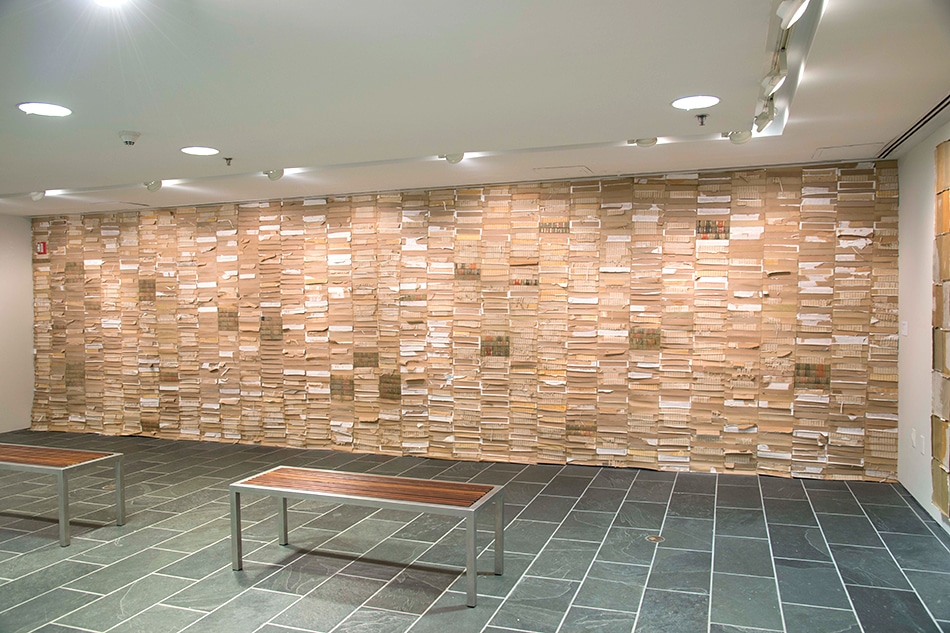 For Unbound, 2015, which was part of an exhibit of the same name, Jones created a site-specific installation that he adhered directly to the wall. Photo by Adam Reich 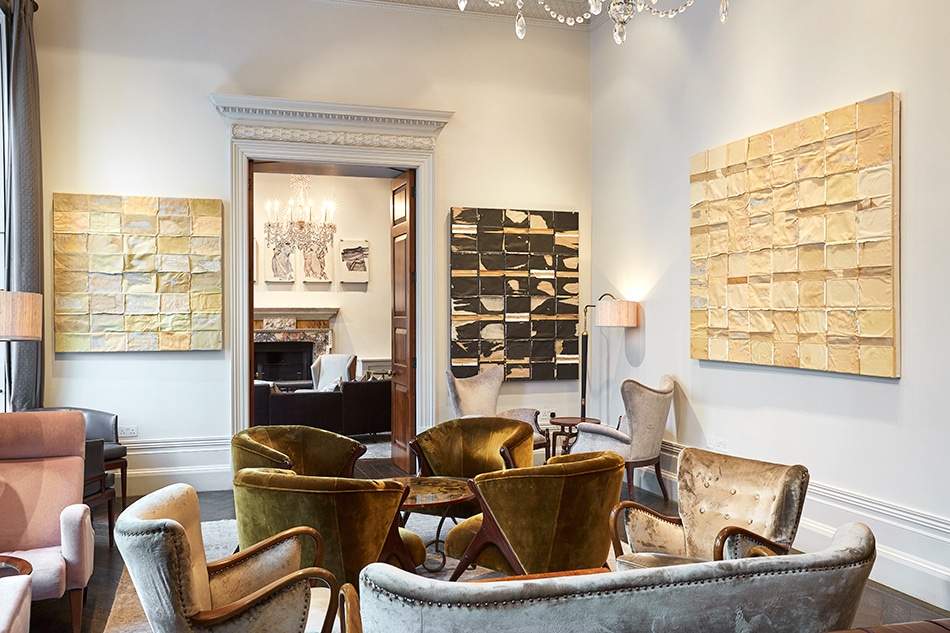 The Arts Club in Chicago exhibited Jones’s work in April 2016. Photo courtesy of The Arts Club

Detail of Selective Proof of Facts, 2016, which is composed of pieces of deconstructed law books and African-American reference volumes on canvas. Image courtesy of Galerie Lelong

Since receiving his MFA from Mills College, in Oakland, California, in 2012, the 38-year-old artist has been using encyclopedias and reference volumes, in addition to law books, as the physical and conceptual departure point for elegant geometric assemblages that he hopes raise questions about systems of power. “It’s not so much about the books themselves,” he says, “but about who compiles this stuff and who’s controlling the information and the histories.”

Jones is from the small town of Marion, Indiana, birthplace of James Dean and site of one of the last public lynchings in the United States, in 1930. After his high school history class discussed the incident, Jones was shocked to learn from his father that one of the two black men beaten by a mob and hung in the courthouse square was his great-uncle. “It’s just something we don’t talk about,” his father told him.

Jones came to art late, in his last semester at Taylor University, in Indiana. His girlfriend (now wife) bought him a camera, and he took a photography class. “I just enjoyed framing things and the process of making prints,” he says. He graduated Taylor with a BA in communication studies in 2002, but in 2006, he enrolled in the BFA program at Indianapolis’s Herron School of Art and Design, where the pioneering African-American abstract painter Hale Woodruff had studied in the early 1920s.

In grad school at Mills, Jones began to tie overlooked and repressed cultural and personal histories, like those of Woodruff or his great-uncle, more directly to his work. He used books as a springboard for the first time in 2011. He was responding to Gerhard Richter‘s 1972 painting series “48 Portraits,” for which the artist lifted head shots of his subjects, all white men who had made significant contributions to the arts and sciences, from encyclopedias. Thumbing through a 1972 edition of the Encyclopedia Britannica, Jones discovered only 13 African-American faces among the 736 reproduced. “Martin Luther King Jr. and Frederick Douglass were even in a section titled African-Americans rather than being under K or D,” says Jones. He printed enlarged visages of 24 black men and 24 black women who could have been included but weren’t — such as Nina Simone, James Baldwin, Gwendolyn Brooks and Langston Hughes — on paper pulped from the encyclopedia pages that excluded them. His grid of 48 portraits — which read as solid black squares until the underexposed faces come slowly into focus — was first exhibited in his MFA show at Mills and shown again this fall at EXPO Projects in Chicago. “They’re fighting for exposure,” he says of the spectral faces. 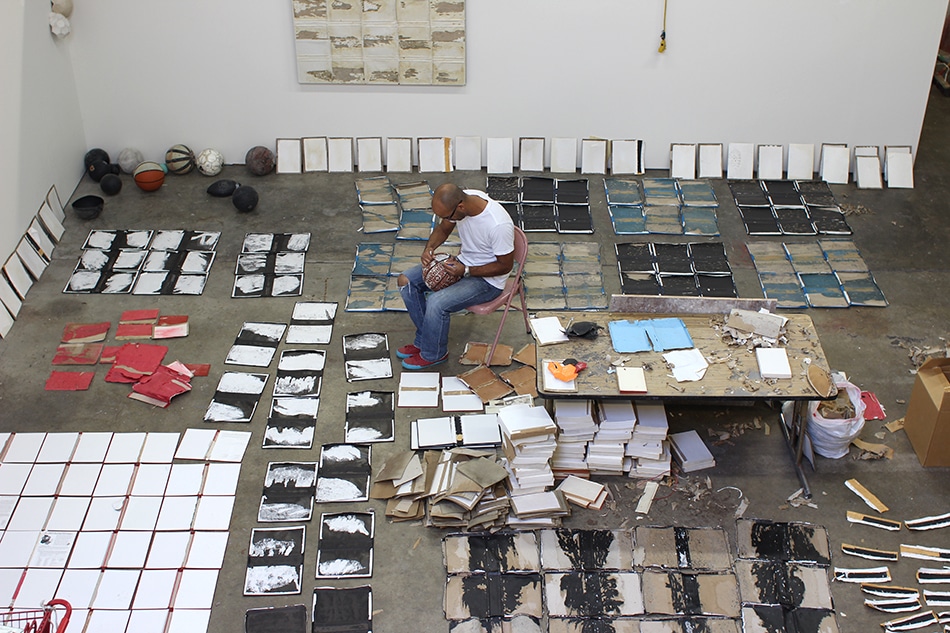 Here, Jones works at San Francisco’s Recology Artist in Residence Studio in 2014 while preparing for his opening. In addition to deconstructing books, he took apart discarded footballs and basketballs to better understand their construction. He worked with the interior side of the leather, which is softer than the exterior and references personal issues within institutional systems. Photo courtesy of Recology San Francisco

The home of architectural designer and M-Projects cofounder Amir Mortazavi, who designed the space, includes a work by Jones and a light fixture by Charles de Lisle. Photo courtesy of M-Projects

While exhibiting in a 2012 group show at Watts Towers Art Center, in Los Angeles, Jones met the artist Mark Bradford, who became a friend and mentor and encouraged him to keep working with books. “He said, ‘You’re not done with this material,’ ” recalls Jones, who went back to his studio and began stripping the insides of reference books and laying them out in abstract compositions. The tactile beauty of these works — some sporting dangling threads or  netting, taken from the back of the spines and recalling gauze bandages — provides a visual lure and, in a non-didactic way, invites consideration of what has been omitted or erased. In 2014, the Studio Museum in Harlem awarded Jones its  Joyce Alexander Wein Artist Prize, which led the following year to a solo show there, “Unbound.”

Recently, Jones received a large cache of deaccessioned reference books from the Department of African American Studies  at UC Berkeley. Several works in the Lelong show integrate multicolored and multi-shaped material from volumes on such subjects as black theater and music with remnants of general encyclopedias and law books. Among these pieces is Burning all illusion, named after a Bob Marley song. “I feel it’s like rewriting to pull together the different sources,” Jones says. “It’s a great way to fold in the left out.”