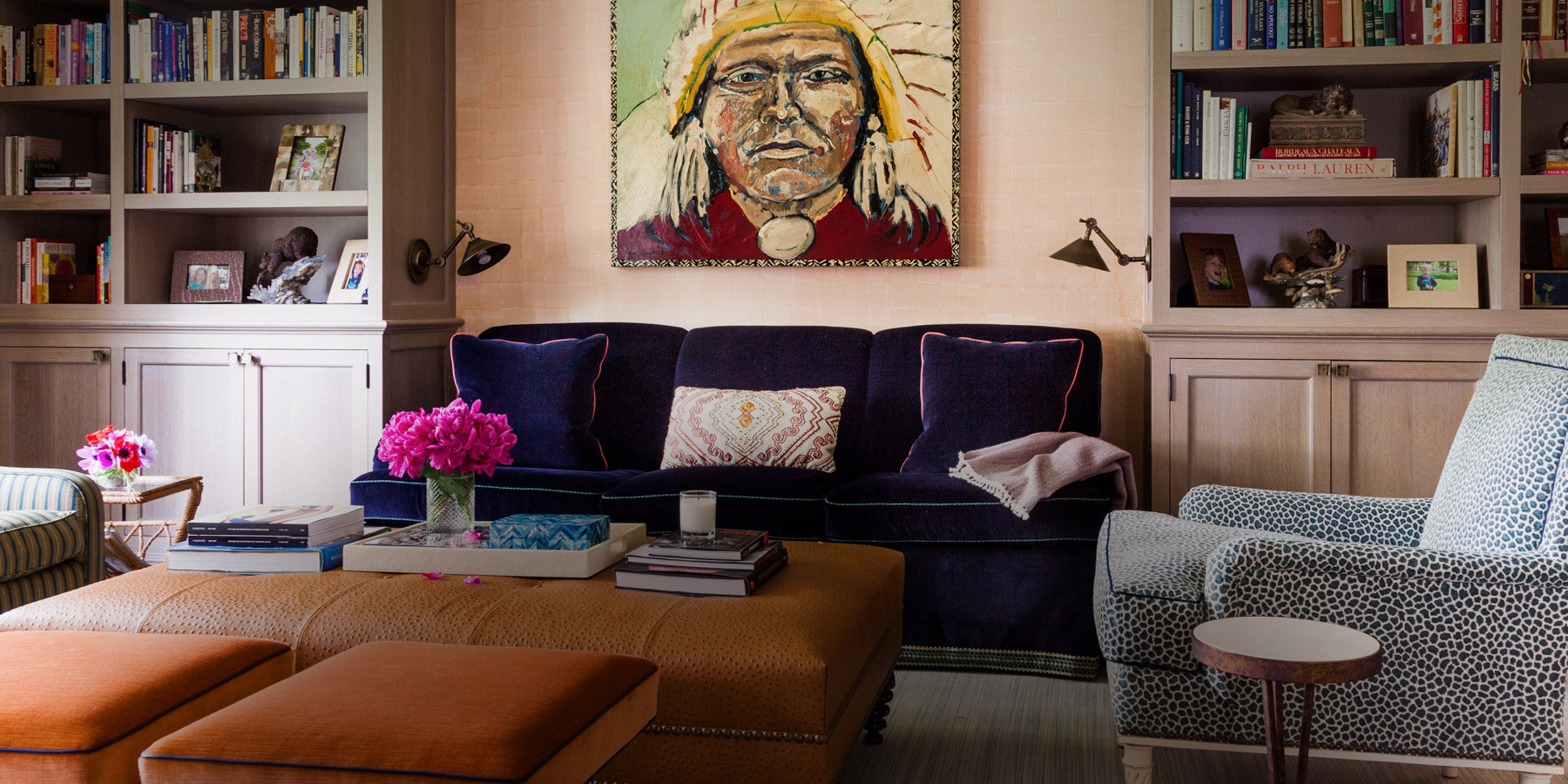 Taking a detour from a planned career in fashion to join Celerie Kemble’s interior design team, the New York–based decorator Sara Gilbane — who launched her own firm in 2008 — has earned accolades for a bold, whimsical aesthetic that mixes old and new, silly and serious, and combines it all with a healthy helping of color. 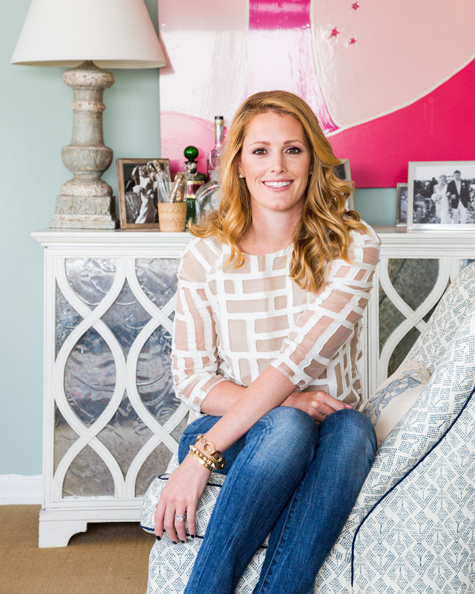 June 11, 2014Sara Gilbane established her New York interior design firm in 2008. Top: In the jewel box-sized library of a house in Rye, New York, a painting by Ira Yeager unites the various colors of the room. All photos by Zach Desart except where noted

I always try to create rooms that feel alive and lived in,” New York-based interior designer Sara Gilbane, 34, says of her approach to decorating. To achieve a vibrant yet comfortable look for her clients, Gilbane relies on a few signature moves: She thrives on a confident color palette, not hesitating to lacquer a dining room in lime green or pair coral wallpaper with a hot-pink chaise lounge. She often lets pattern drive the mood of a room, whether with a suzani-print sofa in a study or a batik-dyed headboard in a bedroom. “For me, it’s about layering, mixing old and new, silly with serious,” she says.

Gilbane had plans to work in fashion when she arrived in New York in 2003 after graduating from Brown University. Before she nabbed a job on Seventh Avenue, however, designer Celerie Kemble, an old family friend, asked Gilbane if she’d like to help open the New York office of Kemble Interiors, then based in Palm Beach. Although Gilbane had taken a few drafting and design classes at the Rhode Island School of Design while studying at Brown, interior decoration wasn’t a career path she had seriously considered. “The only designers I knew growing up were these eighty-year-old men who came over to help my mom with accessories,” she explains. “I hadn’t thought of design as a fun, interesting, youthful profession.” It didn’t take long for Gilbane’s perspective to change once she was working under Kemble. “Within a week, I was totally hooked,” she reveals. “I absolutely loved every minute.”

Gilbane spent the next five and a half years at Kemble’s firm. “When I started, my style was very New England leaning toward preppy,” she says with a laugh. “But nothing beats working with other talented, creative people with strong opinions. I learned so much from Celerie and Christina Murphy [Kemble’s assistant at the time], who’s now a big designer on her own. My taste definitely evolved.” For Gilbane, that meant becoming more fearless in her choices: less matching, symmetry and restraint; more global fabrics, bold colors, powerful textures and unique works by contemporary and emerging artists. 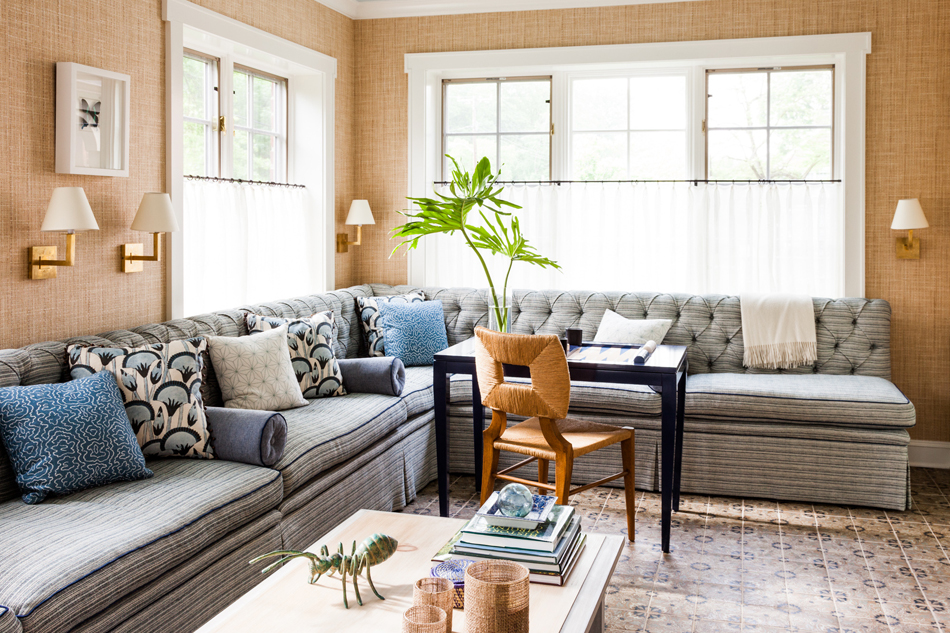 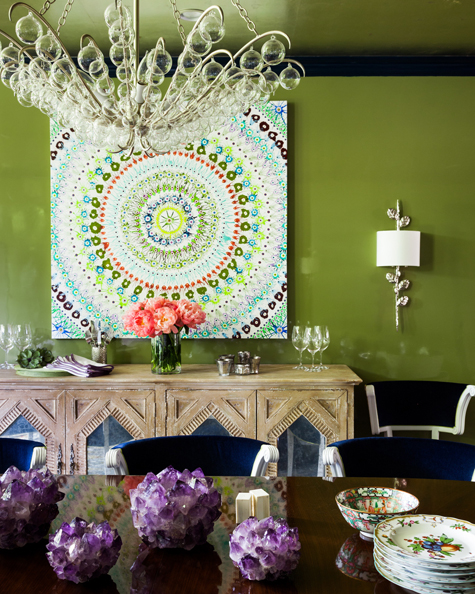 The green-lacquered walls and the silver-branches sconces in the Rye dining room echo the woods just outside. Gilbane commissioned the artist Dan Bennett to paint a piece inspired by the room’s hues.

Today, Gilbane balances her career with a busy home life in the West Village — she and her husband, Jay Sullivan, who works in finance, are parents to Virginia, 3, and James, 14 months. At the office, she helms a staff of three, overseeing such current projects as an Upper East Side condominium for a family relocating from Hong Kong; a gut renovation of a traditional colonial for a young couple in Rye, New York; and the reimagining of a traditional home in Palm Beach as a more laidback, Bahamian-style abode. She’s also had clients in Newport, Rhode Island; Locust Valley, New York; and, even closer to home, in Tribeca and the West Village.

Although Gilbane now stays away from anything too preppy, the designer’s roots (she was raised in East Greenwich, Rhode Island, and her family has a house in Palm Beach) absolutely inform her design choices. “I grew up with the idea that you find a fresh way to reuse and mix pieces that have been handed down through generations,” explains Gilbane. “There’s no need to buy everything new.” It’s a concept that undoubtedly keeps her clients, many of whom are young families, very happy. 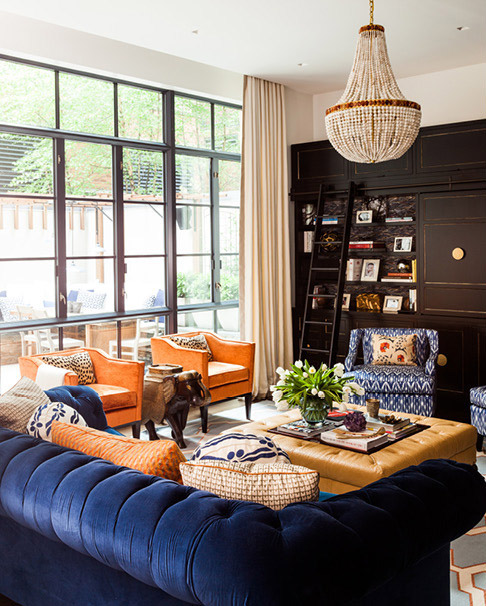 “My client loves blue and orange, and I wanted to find a way to indulge this without letting the large space feel like it was overwhelmed with color,” the interior designer says of a bright yet elegant home she designed in New York’s Tribeca in 2013.

Gilbane always tries to throw something fun and unexpected into every space. “With Palm Beach interiors, I insert an element of whimsy,” Gilbane says. “It keeps a room from being too precious.” To wit, in the foyer of a recent project for a family in the Florida enclave, Gilbane placed a large ceramic leopard with its mouth open in a roar next to a stylish console. “It lightens everything up,” explains the designer. “It immediately shows visitors that the home’s owners don’t take themselves too seriously.”

These days, Gilbane is also working on a six-piece furniture line for The New Traditionalists, a furniture and fabric showroom based in the New York Design Center, which will debut this summer. “I designed those key pieces that I have a hard time finding in the marketplace,” she explains. These include a white-lacquered daybed that can double as a spare bed for guests and a cocktail table whose surface can be custom covered in anything from leather to tortoiseshell. For the Massachusetts-based design collective Peter Fasano, she’s also creating a fabric and a wallpaper inspired by vintage Moroccan textiles, which are due out in early fall.

Though interior design wasn’t her original aim, she couldn’t imagine a more natural career fit. “It’s like oxygen for me. I love the creative process. If I wasn’t doing this as a job, I am sure I would be doing it anyway for friends and family. I feel very lucky.” 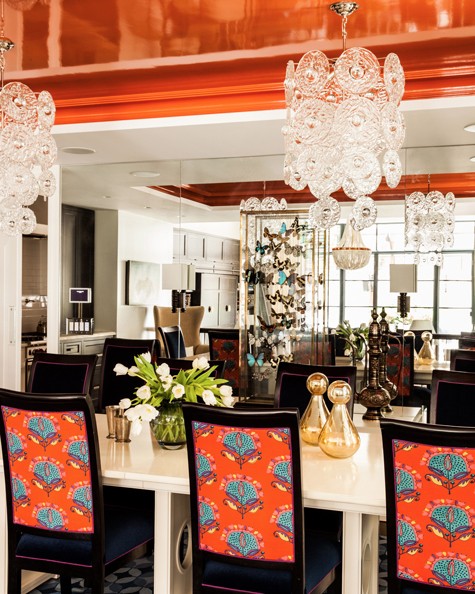 The designer carried the orange-and-blue motif of the Tribeca living room into the dining area, covering the seats of the chairs in navy mohair and their backs in orange fabric that complements the lacquered ceiling. The table was painted to resemble tessellated bone.

My parents and grandparents who took great pride in their homes and always made bold choices in color and pattern. They taught me that place is important to consider when imagining the home as a whole.

Beautiful objects, art, and nature; my clients and my talented gang of designer friends

For the gym, I am all about Katy Perry, Pharrell, Tegan and Sara, Beyoncé, Rihanna, Justin Timberlake, Robyn and Miley Cyrus

Hugo Grenville, Simeon Braguin, Gene Davis, David Allan Peters, Karen Knorr, Yolanda Sanchez, Meredith Pardue, Natasha Law, Mary Nelson Sinclair, Yiorgos Kordakis, Xin Yi . . . the list goes on and on. I am deeply affected by color, and I love the feeling that all of these artists create. Whether it’s a high-gloss finish or beautiful painterly strokes with thick paint, art brings so much to a room. 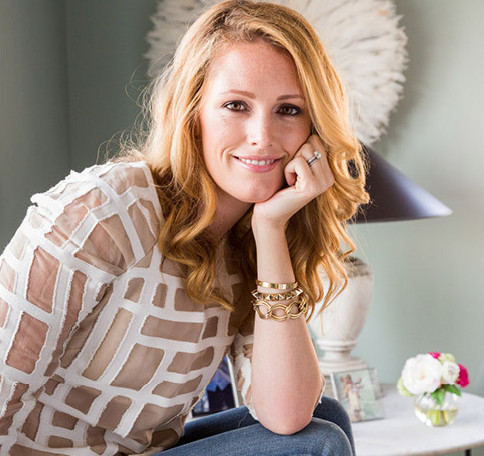 This summer, Gilbane is segueing into furniture design for the first time, launching a six-piece line for the New Traditionalists.

Margarita on the rocks, no salt

Barbuto, Corsino and Recette, all in the West Village

The Goldfinch by Donna Tartt; photographs of my son, daughter and husband; my jewelry; more lotions than you can imagine