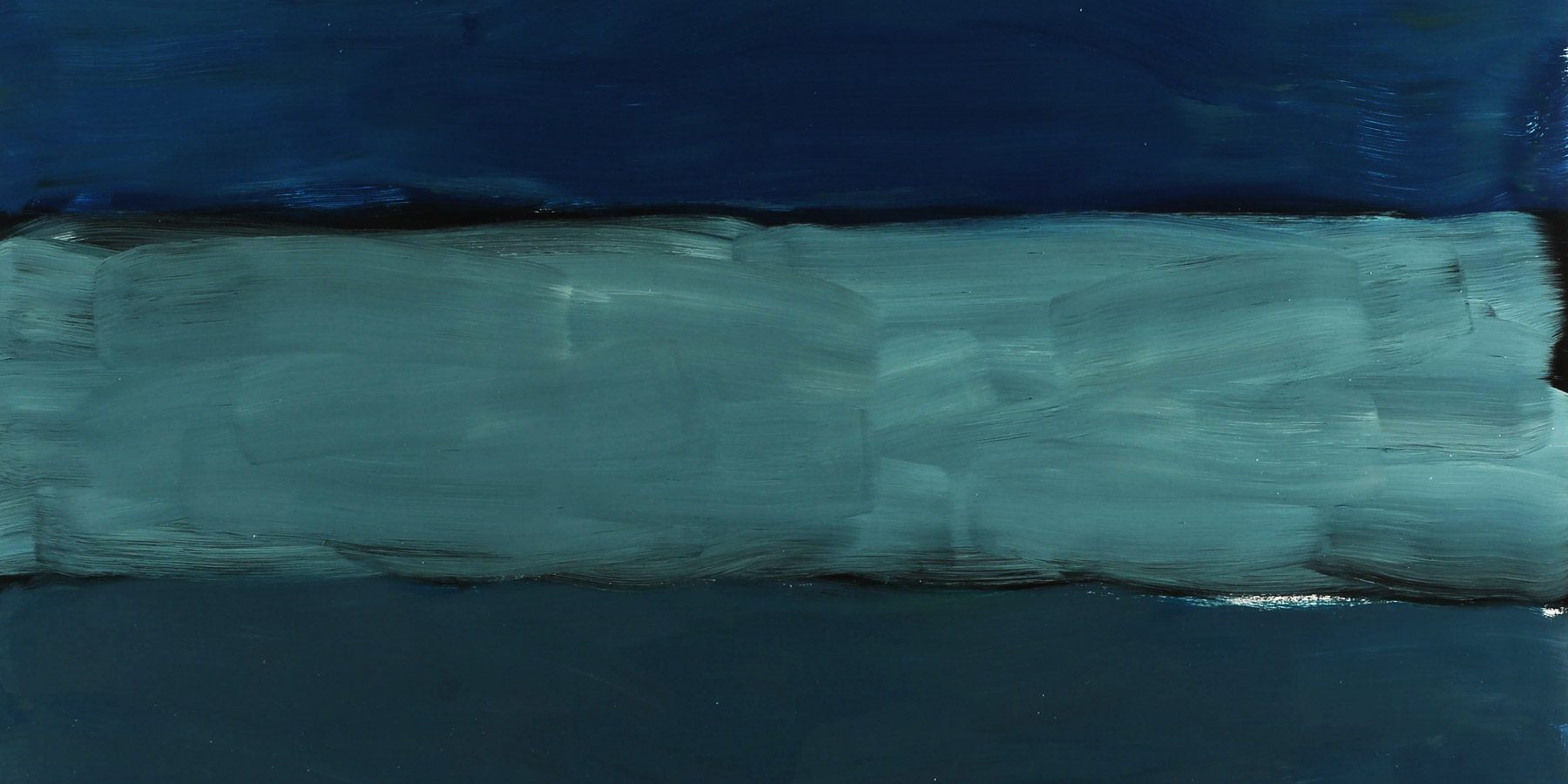 The Star of Stripes

Painting for five decades, Dublin-born, New York-based artist Sean Scully is having a major moment this year, with a current exhibition of recent work at his Manhattan gallery, Cheim & Read; a major career retrospective now touring China; and a forthcoming show in Venice during the Biennale. 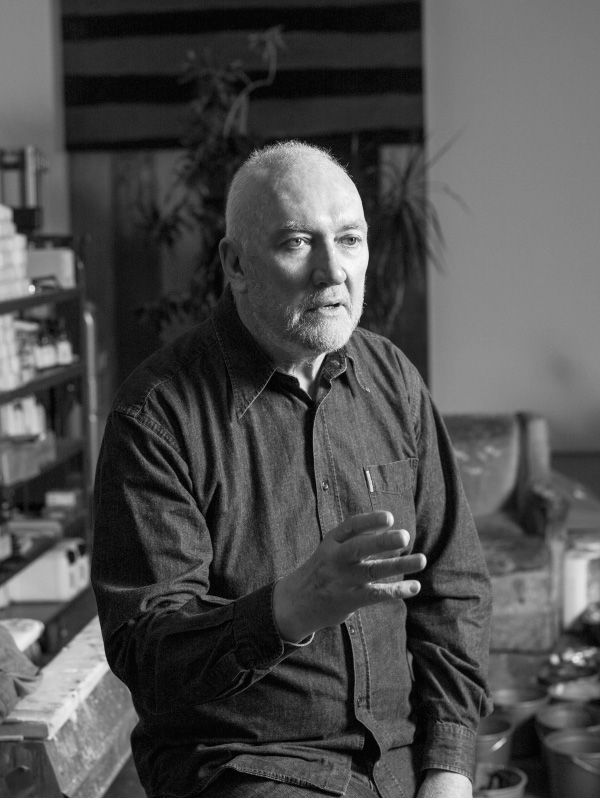 “Landline,” an exhibition of eight new paintings by Irish-born artist Sean Scully, is now on display at New York’s Cheim & Read gallery through April 4th. Photo of the artist by Brian Buckley

When Sean Scully walks into his painting studio in New York’s Chelsea neighborhood, he’s a sleeker, slimmer Scully than I last visited here three years ago. Still strapping at 6’3”, he bellows in his gruff but warm Irish brogue that he has shed 20 pounds. He dropped the weight largely by walking, which he took up in earnest to kick the painkillers he was on for three months after throwing out his back while jumping on a trampoline with his young son. “I’m so happy right now,” he says, sounding genuinely at peace. He professes to have found new reserves of energy, and from the looks of his studio and his jam-packed exhibition schedule this year, he is not exaggerating.

Scully takes his usual seat in a well-worn armchair in the center of his spacious studio. Behind him, on the southern wall, hangs a group of tall, slim images of horizontal stripes. From a distance they appear to be more of his trademark abstract paintings, or perhaps prints, but up close they reveal themselves to be photographs. “They’re Chelsea roll-gates,” Scully says, ending the mystery. One Sunday morning last year, he went for a stroll in the neighborhood, shooting businesses that were locked up. He cropped in close, capturing snippets of the gates themselves, with no identifying context such as walls or sidewalks, and printed them door-size. “Every time I see a roll-gate, to me it looks like a beautiful painting.” The 10 works, “New York Shut,” will be shown this year at the National Gallery of Ireland, in Dublin.

On the studio’s northern wall, meanwhile, there’s a painting of his five-year-old son, Oisín, which Scully made the previous week. Oisín is pictured crouching, his facial features blurred out. “That’s the first figurative painting I’ve made in forty years,” he says. “Just bang, bang, bang, better than Baselitz.” Scully is not one for false modesty. “I’m going to paint a cycle on my son because I’m obsessed with him. I love him so much it’s a kind of insanity. These are just for me,” he adds. “I’m never going to show them commercially.”

On the western wall hang a series of monumental abstractions with dark blocks of color made a few years ago, and, finally, on the eastern wall are works from his 2014-15 “Landline” series, destined for an exhibition at Chelsea’s Cheim & Read gallery that opened February 19 (it runs through April 4). While some are what he calls sad — deep, moody blues and grays evocative of the sea — a lighter palette of green, yellow and red gives others a certain joy. There’s a luminosity akin to Rothko and an emotional life that calls to mind Agnes Martin, a hard-won achievement for paintings of stripes. His ultimate goal, he explains, is to “make something fierce but beautiful.”

“I started using green, and I hadn’t used green in many years, I think because green is not an intellectual color,” Scully says. In his opinion, it alludes to nature, not ideas. “Everything that grows is green. Green is so life-affirming.” Scully suspects his green embrace has to do with his move to the country — to Snedens Landing, New York, up the Hudson River, after a lifetime spent as a city dweller. “I was extremely depressed for a long time,” he says. “My paintings are not known to be uplifting. I’m not a jolly painter. Now they’ve become a lot more vital. I don’t control as much,” he claims, gesturing to some drips.

The most striking difference may be that the stripes in this series are all horizontal and stretch unobstructed — in thick, gestural, luscious swathes of paint — from edge to edge. His previous paintings typically featured sections of vertical bands abutting sections of horizontal ones, or adjoining rectangles of color. Others were of staggered horizontal stripes, changing color or width as they moved across the canvas. For the “Landline” series, Scully found the rhythmic, sweeping, side-to-side brush strokes more emotionally satisfying, if physically harder to control, than vertical ones. 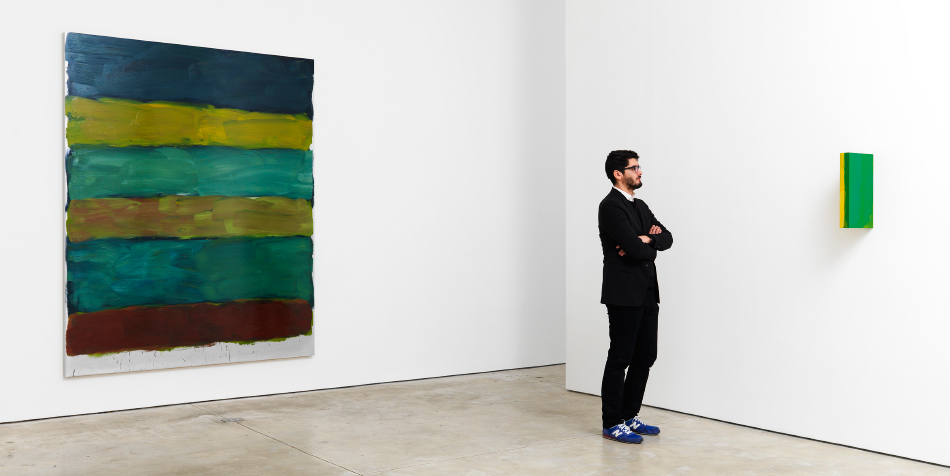 Scully’s “Landline” series primarily features paintings with thick, textural horizontal lines of subtle but artfully matched colors, as with Landline Black, 2014, at left. An exception to this is Untitled (Floating Painting), 2014, at right. Photo courtesy of Cheim & Read

When he initially discussed it over lunch with his dealer John Cheim, Scully first begged off the idea of a gallery show. “Then we had a bit more wine,” Scully recalls with a knowing laugh. “When one drinks wine, things become possible.”

This will be a busy year for Scully, who has twice been shortlisted for the prestigious Turner Prize. A 50-year Scully retrospective of more than 100 works, which bowed in Shanghai in November and moves to Beijing in March, is the first traveling exhibition in China by a Western abstract artist. He’ll also show his “Landline” paintings at the Palazzo Falier as part of the Venice Biennale; team up with his wife, Swiss-born artist Liliane Tomasko, for an exhibit at the Kunsthalle Rostock in northern Germany; and celebrate his 70th birthday with a retrospective at the National Gallery of Ireland. Add to that list solo shows in Brazil, Spain, France and Austria, and you have an artist very much in demand.

“My paintings are not known to be uplifting. I’m not a jolly painter. Now they’ve become a lot more vital. I don’t control as much.”

Though most artists salivate at the prospect of having their work on view at the Venice Biennale, Scully professes to be underwhelmed, calling himself a “reluctant bride.” “I didn’t actually want to do Venice,” he grouses. “It’s too crowded. Venice gets on my nerves. It’s a lot of trouble. And Italians — I love them, but you can never get a straight answer out of them.”

What has him really jazzed, however, is China, where he was wowed by the turnout of both media and visitors to the Shanghai leg of his tour. The retrospective highlighted his paintings and drawings, but he also created a monumental steel sculpture of stacked, side-less boxes occupying about 1,000 square feet — a Scully drawing made three-dimensional. “It’s amazing how you can be fashionably unfashionable,” he says. “They gave me twenty-five-thousand square feet. To put it in perspective, my show at the [Metropolitan Museum of Art], which was beautiful, was five-thousand square feet. I got five times that without even asking.”

While in China, Scully visited his old friend and pupil Ai Weiwei, the politically active artist who was infamously imprisoned in 2011. Scully was subsequently quoted in the British newspaper The Guardian alleging that Ai was “manipulating all that to stimulate his market in the West.” Scully now calls that an over-simplification. “He’s doing it because he believes in it and his father [poet Ai Qing] was persecuted. Coincidentally, the West finds that very attractive. But it creates a vision of China that’s a cliché. All other artists are working unfettered.” Scully goes on to rip American police who “shoot children and strangle people for selling cigarettes,” referencing the recent deaths of 12-year-old Tamir Rice in Cleveland and Eric Garner on Staten Island, incidents that have made him consider moving his family to Berlin. (He already has studios in Germany and Barcelona.) “China’s behavior by comparison is dainty.”

Clearly, Scully is not one to mince words. His swagger may have something to do with the fact that he is entirely a self-made man. He was born in 1945 in Dublin. “Both my parents, who were Anglo-Irish, were deserters from the war,” he says, not “working class,” but dirt poor. His grandfather’s death certificate, which Scully has kept, lists his occupation as “Traveller,” or gypsy. 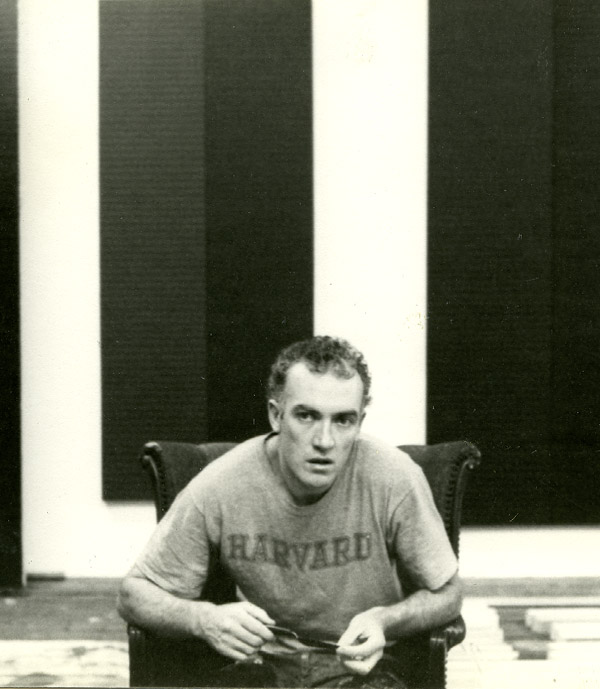 Born in Dublin and raised in London, Scully moved to New York in 1975. He is photographed here in 1980 at his studio on Duane Street in New York’s Tribeca neighborhood. Photo © Sean Scully

His family moved to London when he was four. “My mother, who wasn’t a very wise woman but was a force of nature, like I am, she drilled into me I was just fantastic,” he says. He remembers riding a bus one day shortly after arriving in the city. “I was telling everybody I was beautiful. The people were so charmed. They were all saying, ‘Yeah, you are.’ So I really believe in giving children a sense of over-confidence, which I suffered from all my life, which many people find irritating in New York.”

Briefly tempted by theater, Scully preferred the solo life of painting. He initially broke through in London with figurative work but on a trip to Morocco became enthralled with the endless abstractions on display — walls, floors, textiles, carpets. He concluded London, the home of Lucian Freud and Francis Bacon, was no longer the place for him. Still today, Scully says, “they don’t understand abstract painting even though they pretend to. What they understand is theatrical irony, Poppy conceptualism.” To be an abstract artist, he believed, he needed to be in New York, birthplace of Abstract Expressionism and Minimalism. He moved to the U.S. in 1975. “New York is trial by fire — it worked out for me because I have the capacity of dealing with urban deviousness.”

Scully says his artistic goal is to “make something fierce but beautiful.” Seen here at Cheim & Read are, from left, Untitled (Landline) and Landline Skyline, both from 2014.

Determined to infuse his abstraction with emotion, Scully quickly moved past the often industrial, mechanical, objective feel of Minimalism to a style that is at once reductive and painterly. “It’s sculptural but expressive,” he says. “I passed through Minimalism, but I still think it was a great art movement. It gave me the intellectual basis upon which I’ve danced my dance.” 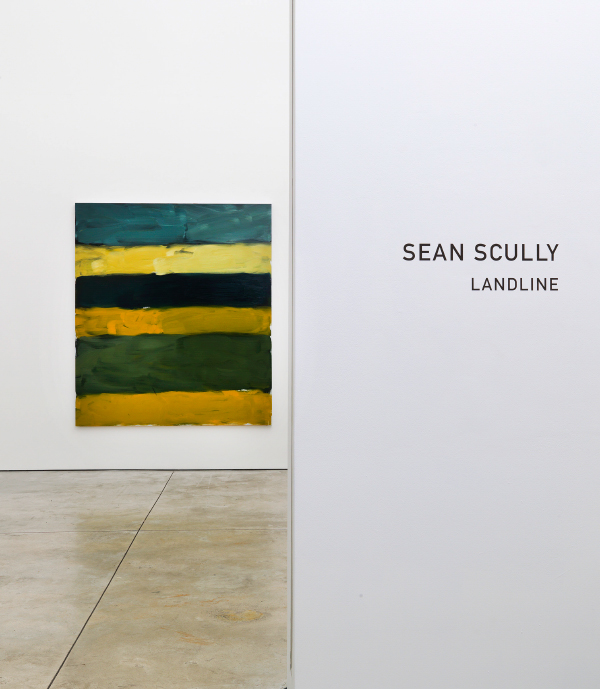 At first Scully resisted his dealer John Cheim’s proposal for a “Landline” show. “Then we had a bit more wine,” he says. “When one drinks wine, things become possible.” Seen here is Landline Beach, 2014. Photo courtesy of Cheim & Read

Though his career was solidly on track, his first son, Paul, was killed in a car accident in 1983, at the age of 18. That loss easily explains his intense devotion to his new family. “My first son died, so I’m kind of an insane father,” he says. “My priorities rearranged. He’s number one; everything else is at best number two. Picasso said children were not good for art. But I think Picasso said a lot of bad things.”

Scully and Tomasko are including some of Oisín’s drawings in their Kunsthalle Rostock show. “His drawings are better than mine,” Scully insists. To accommodate Oisín’s disdain for babysitters, Scully now paints half-time; he and Tomasko alternate days coming to their Manhattan studios or playing with their son after school, and they’re building a grand new studio on five acres of land six minutes from their house upstate. Scully boasts that it looks like a museum. When it’s finished, he plans to unload his Chelsea studio. “Once you don’t need something anymore, it starts to get on your nerves. I’m a great leaver. Of course, I’m a very romantic artist but utterly unsentimental. I can walk away from this studio and see it knocked down and not give it a second thought.”

He also stands to pocket a hefty sum given New York’s red-hot real estate market: “It’s what they call the luck of the Irish.”