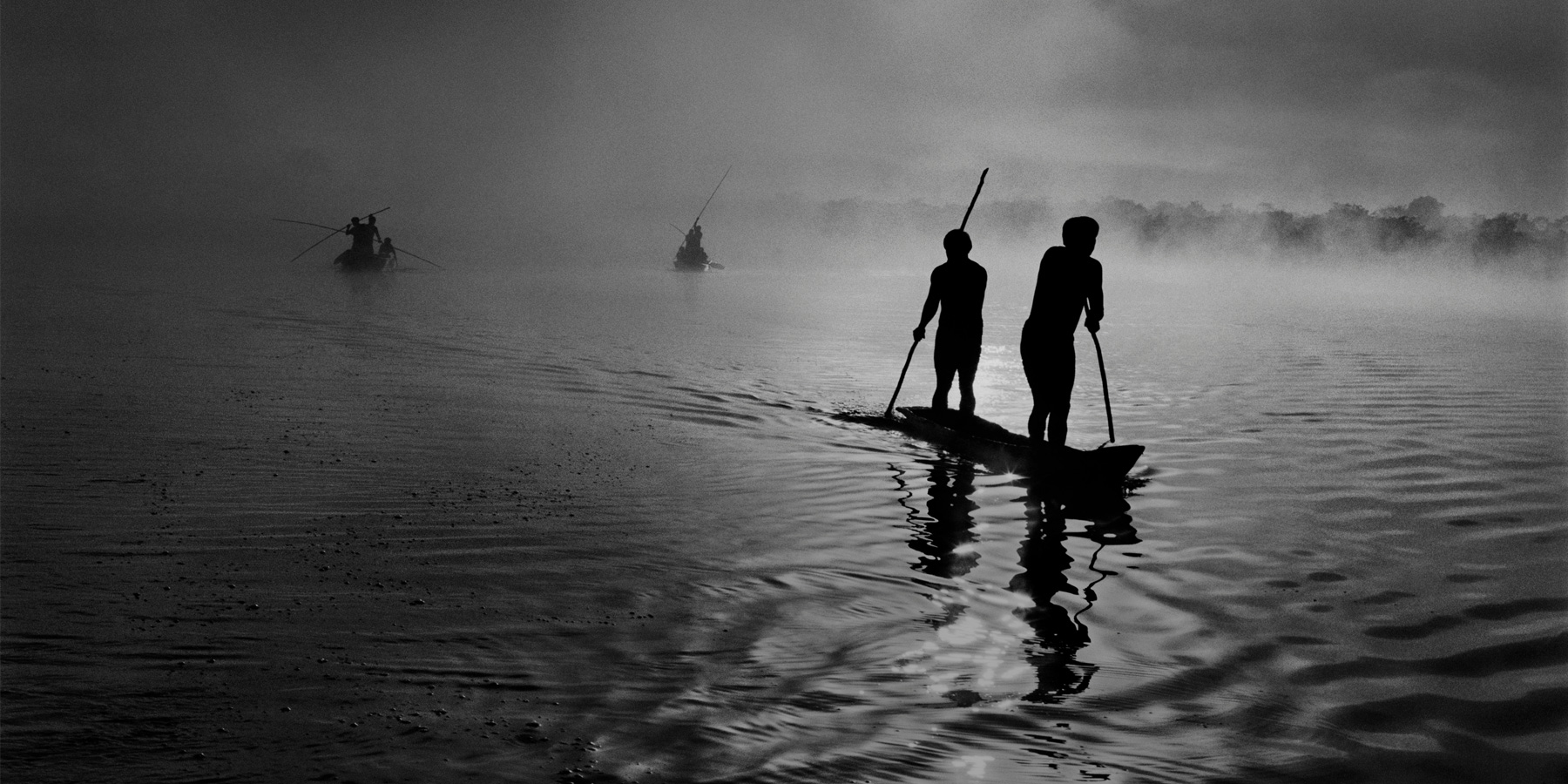 The remarkable images in Genesis, the art-edition published by Taschen, can also now be seen in an exhibition at the Peter Fetterman Gallery in Santa Monica. 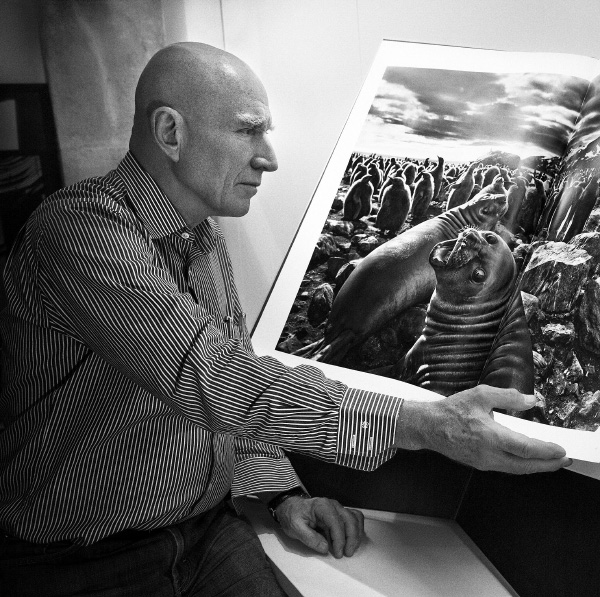 Sebastião Salgado first captured the world’s gaze in the 1980s with his dramatic photographs of armies of half-naked men laboring at a Brazilian goldmine. Now he has composed Genesis (Taschen), which he calls a “love letter to my planet.” The visual ode to Earth took him on an eight-year odyssey, from the Arctic to Africa, the American Southwest to the Amazon, capturing nature’s glory — not just its wildlife and landscapes but also its humanity, all of it virtually untouched by modernity.

The black-and-white photographs of the frozen tundra near the top of the world are among Salgado’s most exquisite: thousands of reindeer traversing the white Siberian snow; the Nenets, a nomadic people, making camp and chopping chunks of a frozen lake to melt into drinking water; the sun-pierced, low hanging clouds and the windswept snow seemingly dancing a pas de deux. For the Brazilian-born Salgado, the Siberian series was also probably the most challenging to execute. A former economist, he always carefully researches his far-flung excursions, and, before leaving for Siberia, he bought outerwear made to be worn in temperatures as cold as 60 degrees below zero.

“The truth was, it was good for two hours outside, not twelve,” he says from Paris, his home for the past several decades. Shortly after he joined up with the Nenets, he explains, “They saw I was freezing and proposed I use their clothes — the skins of reindeer.” The other hardship was going 47 days without a shower. “They don’t wash themselves. There’s no way to do it.” Still, he recalls, “It was a fabulous trip. The only regret I had was the day I had to leave.” 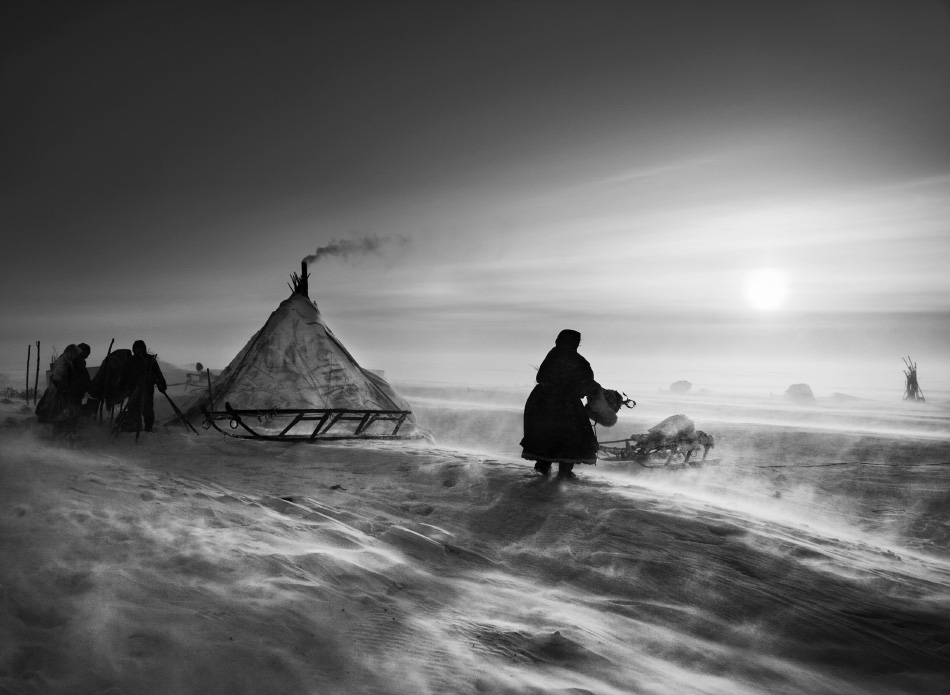 The Nenets, a nomadic population that inhabits the Yamal Peninsula, in Siberia (2011) 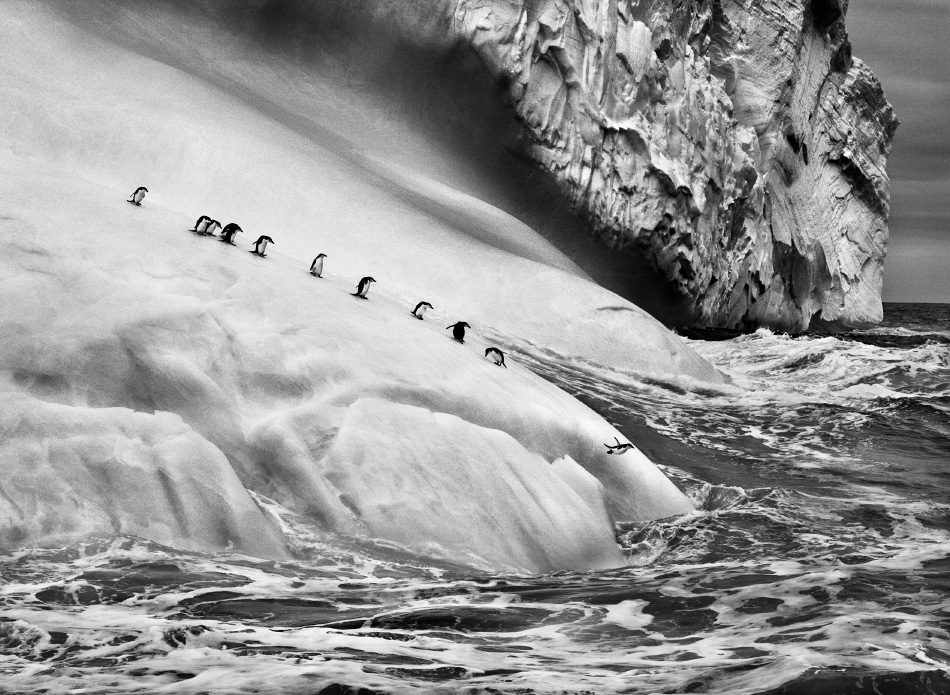 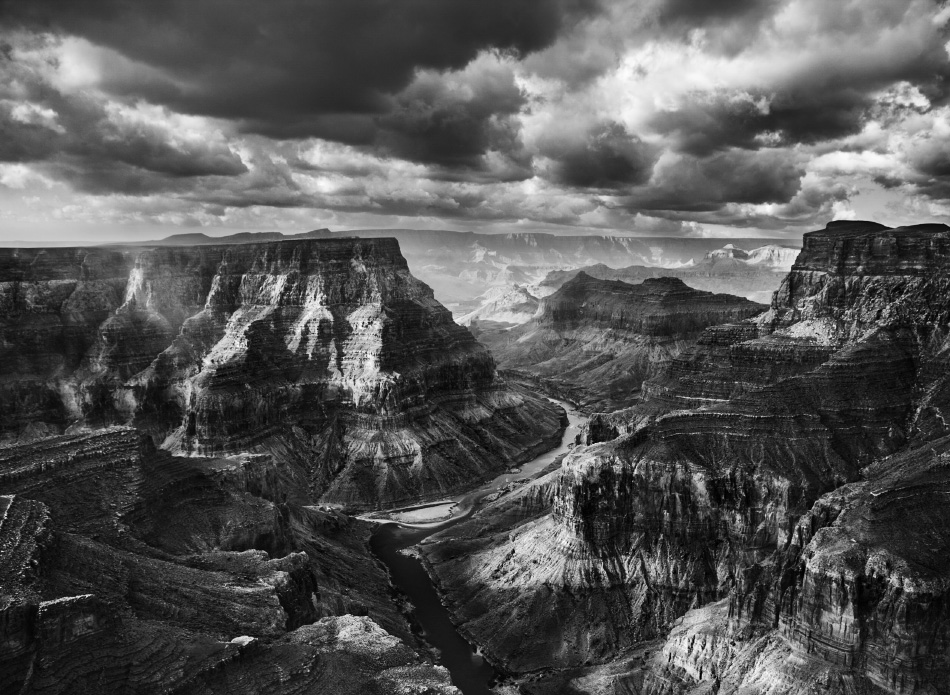 The junction of the Colorado and Little Colorado rivers at the gateway to Grand Canyon National Park, in Arizona (2010) 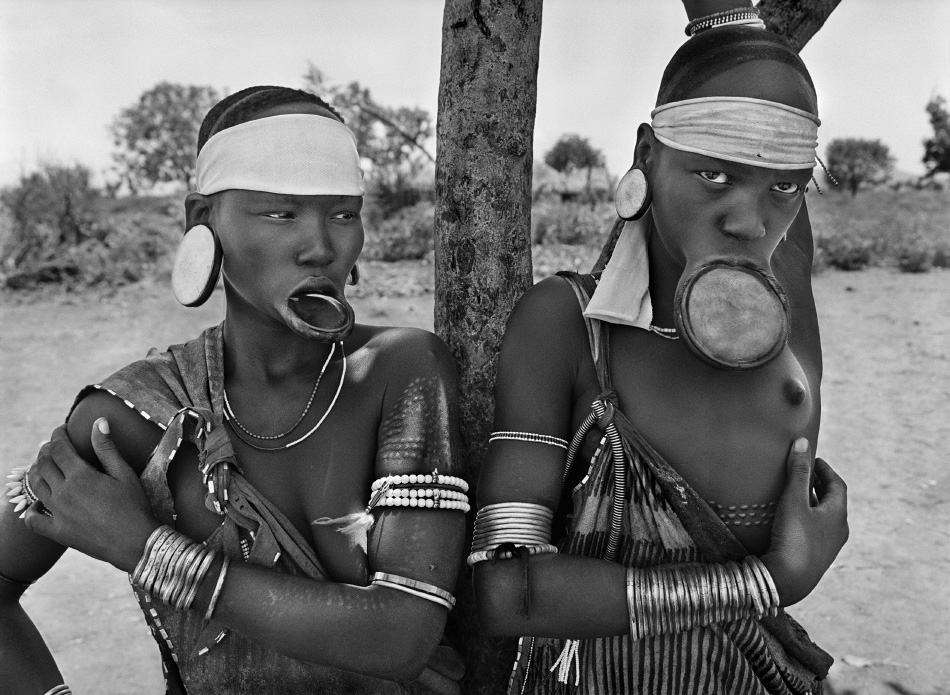 The Mursi and the Surma women in Ethiopia, who, according to Salgado, are the last women in the world to wear lip plates, a mark of high birth (2007) 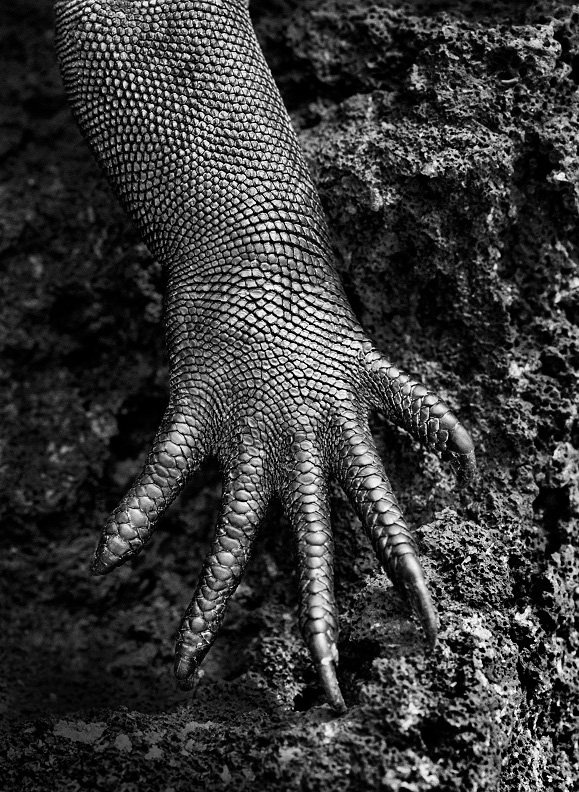 The claw of a marine iguana, a species found only on the Galápagos Islands, in Ecuador (2004)

Salgado’s sense of wonder — he rhapsodizes, for instance, about the almost 600 miles he trekked through the mountains of northern Ethiopia, where, he says, “no cars, no wheels,” had ever been — is palpable throughout Genesis. There’s the cheetah staring straight at the camera as he drinks from a watering hole in the black of night; there are the penguins dotting the edge of an iceberg. Salgado, a master of natutral light, even finds poetry in the ridges of tree bark and the way a river winds through a mountain range.

Just as astounding, though, are his images of indigenous peoples in their traditional dress — or lack thereof. (Some wear nothing more than penis sheaths.) Salgado arrives respectfully, with a teacher or guide, to gain their trust. “You come for a long time, not for a few days,” he says. “In the end you become friends.”

Taschen is offering Genesis, which was conceived and designed with Salgado’s wife, Leila Wanick Salgado, in three versions, the most impressive of which is the two-volume, four-foot-tall art edition. Including a signed print and a bespoke Tadao Ando stand, it is available exclusively on Taschen’s 1stdibs storefront and at the publisher’s retail stores. Genesis is also traveling as an exhibition, beginning in London, Rome, Toronto, Rio and Paris before moving on to more than 30 museums over the next few years. (It will be on view at his longtime gallery, Peter Fetterman, in Santa Monica, California, from June 29 through October 19.)

Salgado is typically described as a photojournalist, but the artistry of his painterly photographs is undeniable. The way Fetterman sees it, “There are directors, and then there’s David Lean. There are photographers, and then there’s Sebastião Salgado. He just takes it to a new plane. He’s telling a story.”
For his part, Salgado shrugs off the artist label. “I’m a photographer,” he says. “I have this privilege that I can go anyplace on this planet.” Though he has not conceived his next large-scale project, Salgado adds, “I am sixty-nine. I have time yet to do a few more.” 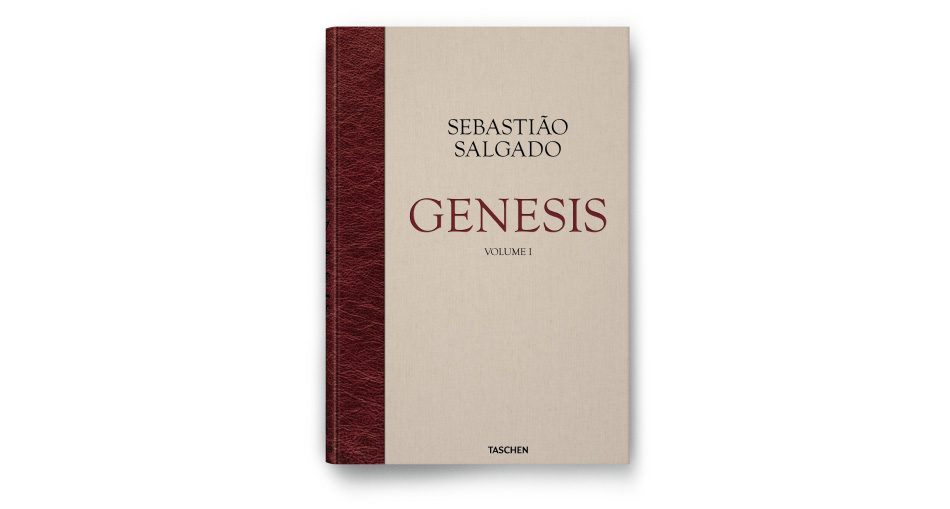 Purchase This Book on 1stdibs