Inside the Brooklyn Penthouse and Manhattan Exhibition of a Major Collector 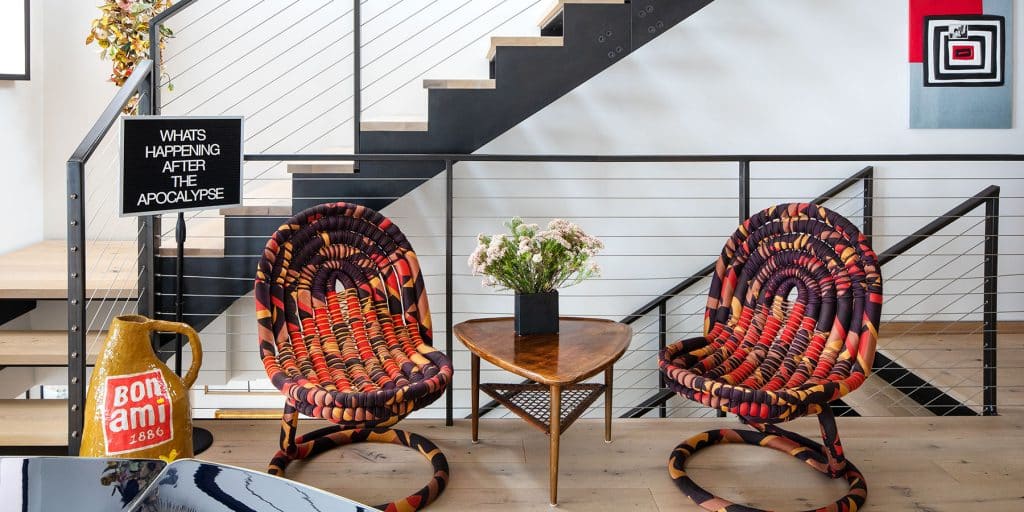 Stephanie Ingrassia shows us around her art-filled home and the new show she curated at Cristina Grajales Gallery. 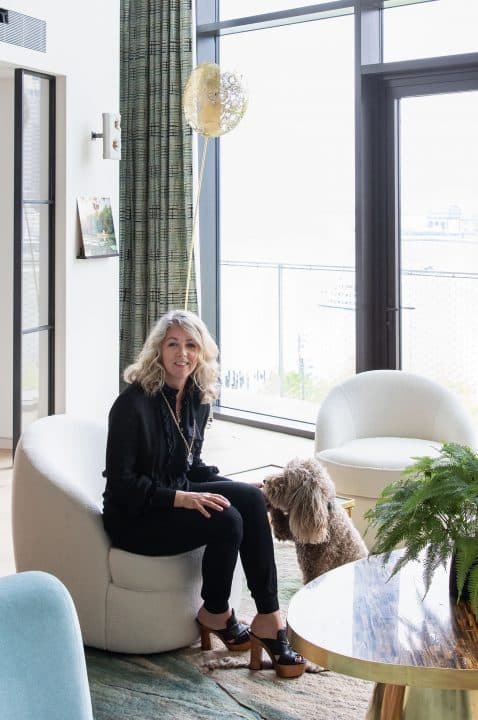 May 26, 2019Collector and Brooklyn Museum trustee Stephanie Ingrassia — pictured in her Brooklyn Heights penthouse with her labradoodle, Olive — guest curated the new show, “Encounters,” at Cristina Grajales Gallery. The standing light behind Ingrassia is by the Campana Brothers; the artworks on the wall are (from top) by Donald Moffett and Elger Esser. Top: A pair of Betil Dagdelen chairs flank a vintage table from 1stdibs. Artworks include Food 4 Less Bon Ami, 2019, by Grant Levy-Lucero, and Apocalypse, 2016, by Maynard Monrow. The geometric painting at right is by Sadie Benning.

Meetings of the minds are tricky. It’s fine to say you want to collaborate, but how, where and when exactly to do it?

For collector Stephanie Ingrassia, Brooklyn Museum board vice-chair and resident of an art-filled aerie in Brooklyn Heights, and design gallerist Cristina Grajales — two busy and accomplished women — it was complicated for sure. But the results seem effortless.

Their new show, aptly titled “Encounters” — up at Grajales’s gallery until June 28 — spotlights 40 makers, whose works are arranged in domestic vignettes. The displays mix wares from such gallery stalwarts as Steven and William Ladd, Mike and Doug Starn and the late, great Charlotte Perriand with some of Ingrassia’s favorite visual artists.

Grajales intends to make guest-curated shows a yearly event at the gallery, with a new name each time, potentially, and Ingrassia was a natural choice for the first one — the two are old friends (and both sit on the board of Creative Time). 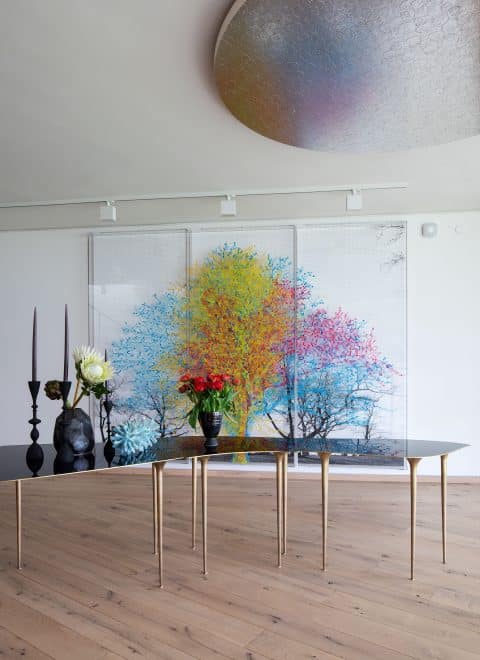 A tondo by Takashi Murakami is mounted on the ceiling, while Number and Trees Central Park by Charles Gaines hangs on the wall. The custom table is by Massimiliano Locatelli.

“I wanted to do something new. And then I thought, how fun to add somebody whom I love and respect like Stephanie. It had to be somebody who really knew the art and design worlds — not so many people know both,” says Grajales, adding, “We gave her absolute freedom, and the rest is history.”

Ingrassia — who, with her husband Tim, has amassed a personal collection of several hundred works — embraced the idea of an exhibition that did more than merely show off her own trove. Been there, done that.

“A lot of the featured artists are people I’ve collected or have looked at,” she says. “But I didn’t want anything from our collection. You go to shows where there are beautiful things, but they’re not for sale, and that’s frustrating. We wanted everything to be for sale — a very democratic show.”

Democratic in another way, too. Grajales normally sells high-end pieces, and the show does include such items as Gloria Cortina’s North and South cabinet, studded with “porcelain feathers,” priced at $75,000. But it also has a painting by Madeline Weibel, Memory, for $500. And it shines the light on lesser-known artists, like the painter Rebecca J. Stevens, who teaches at St. Ann’s School in Brooklyn. 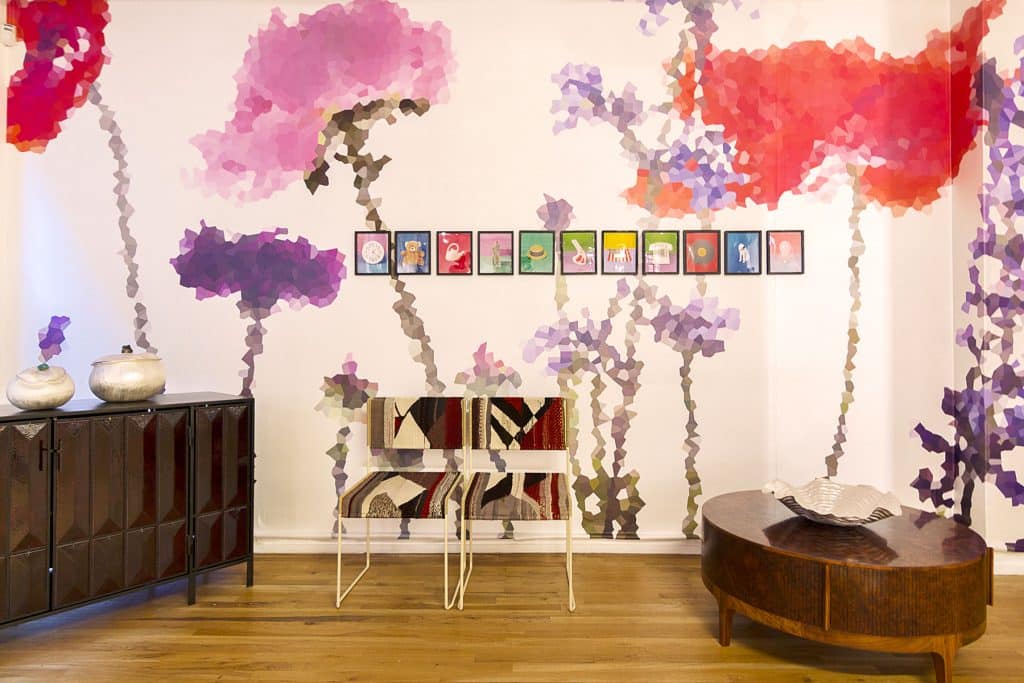 Christophe Côme’s purple Lava cabinet is topped with Cinerario 1 and 2 and Dunas Grande by Alexandra Agudelo. The pair of Desert weave chairs are by Betil Dagdelen, and the Tambour coffee table is by Aaron Poritz. The custom wallpaper is by Amanda Weil, and the prints by Neil Winokur. Photos in this slideshow by Dora Somosi 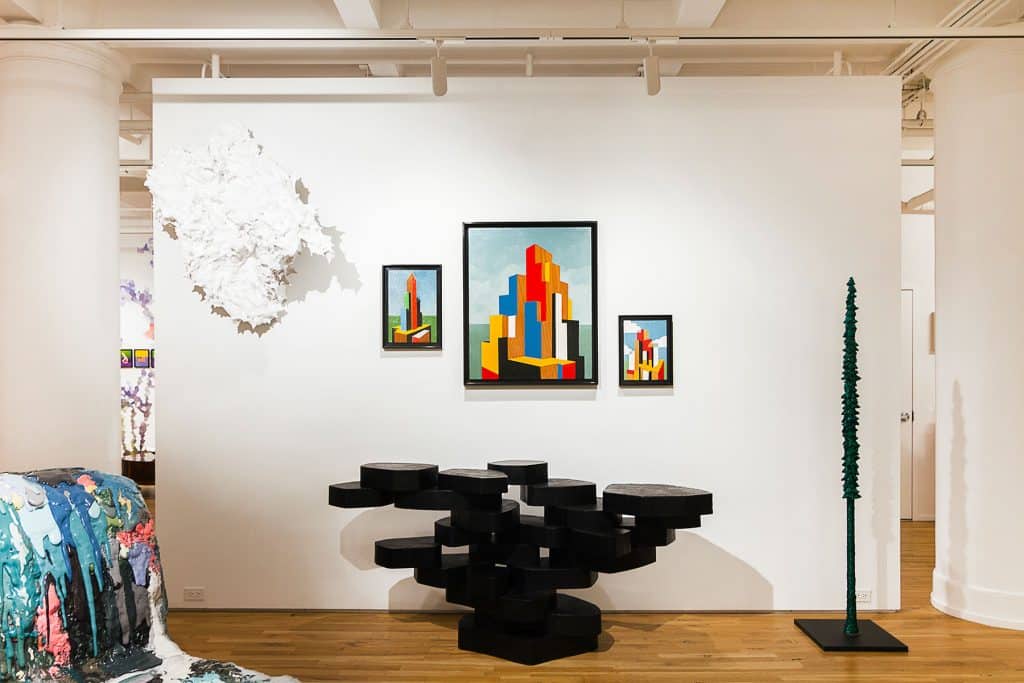 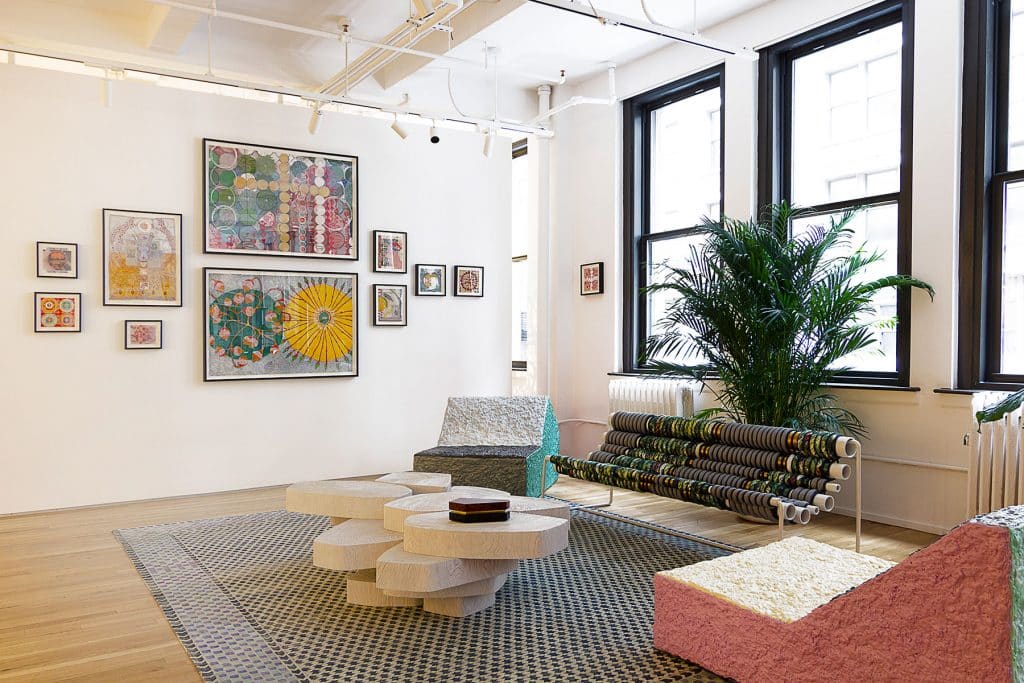 Hanging on the wall are mixed-media pieces by Rebecca Stevens. In front of them, Sang Hoon Kim foam chairs, a Betil Dagdelen Alloy bench and a Stefan Bishop white Ring coffee table are arranged on a rug by Madeline Weinrib. 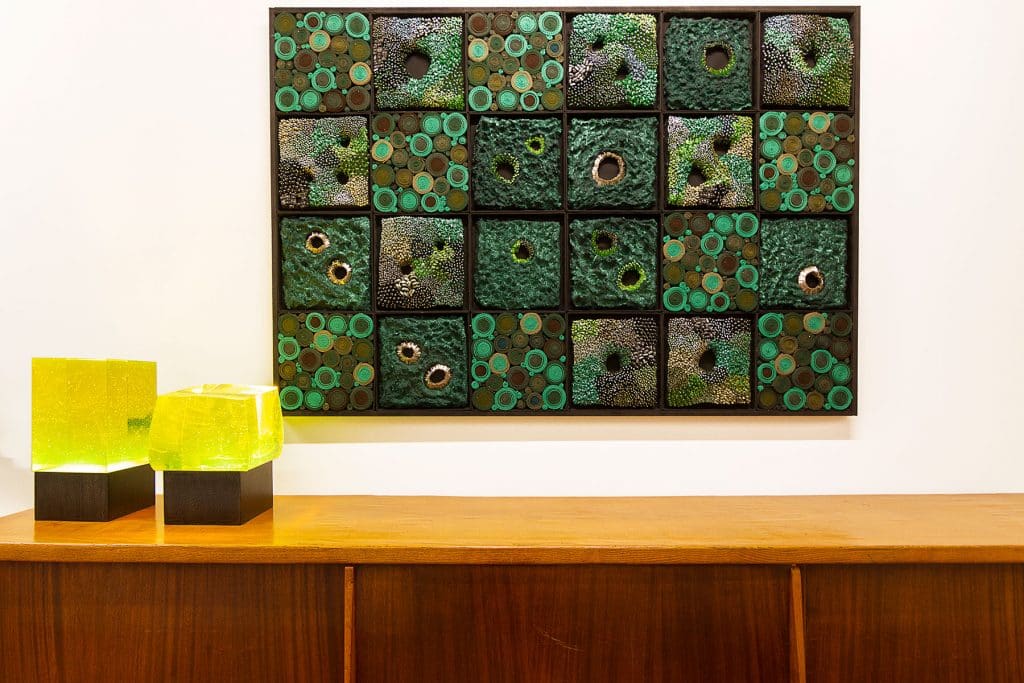 Wetlands by Steven and William Ladd is mounted on the wall above a Charlotte Perriand cabinet, which is topped with Green Cube and Green Loukoum by Christophe Côme. 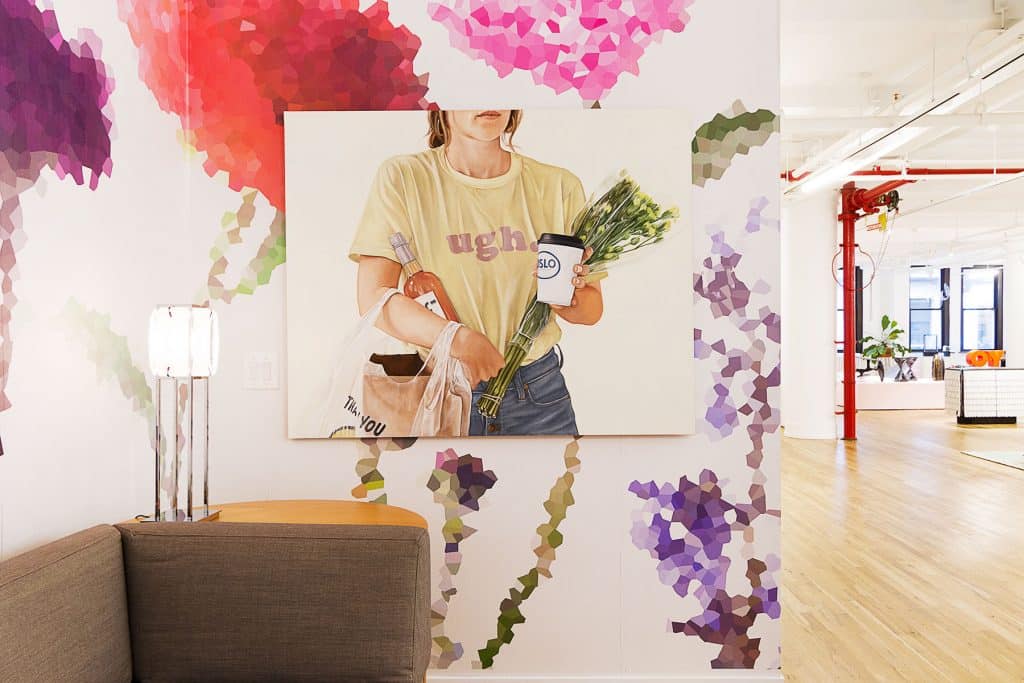 Unrhymed Poetry by Helen Robinson is displayed with a lamp by Christophe Côme and a Sam Baron daybed. 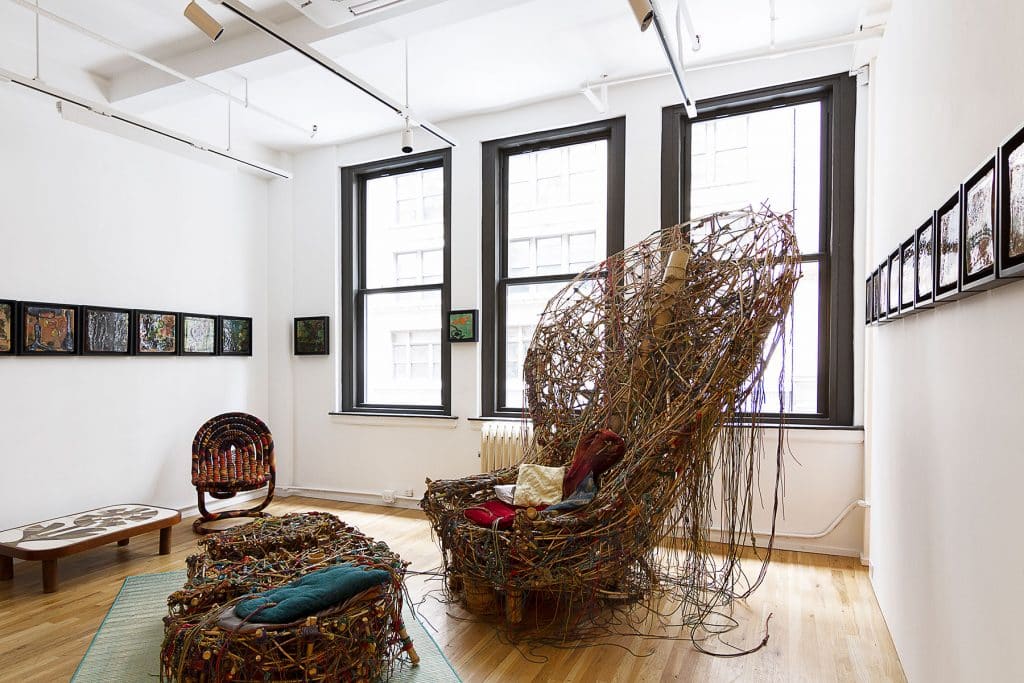 This space features works by Mike and Doug Starn, made from bamboo and rock climbing cord, including All the Nightmares Came Today. 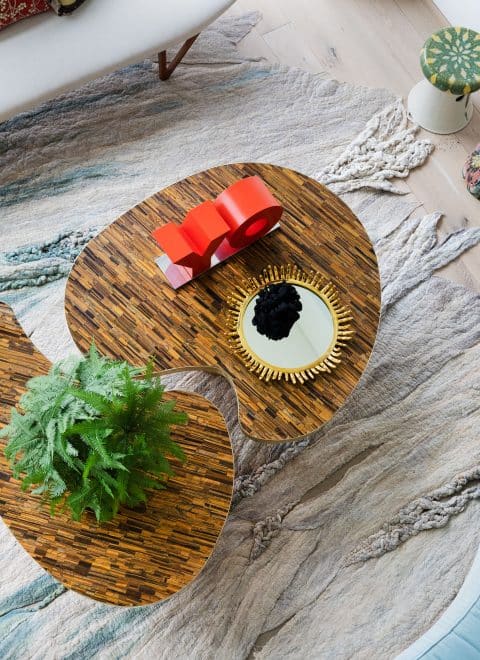 In the living room, OY/YO (Red) by Deborah Kass and a mirror by Jonathan Adler (used as a tray) are displayed on the coffee table by Galerie Glustin in Paris, purchased through New York’s Bernd Goeckler. The rug is by Dana Barnes.

“For me, the surprise was getting over the initial panic of not having enough objects to get the message across and realizing I did have enough,” says Ingrassia. “I was a little nervous.”

Grajales was worried for the opposite reason: As the dozens of objects arrived, they seemed like too much to handle. The show is the biggest Grajales has put on in her newly expanded space, located in New York’s flower district. “But it was perfect, and we used every single piece,” she says. “And we installed it all in two and a half days.”

The veteran dealer felt a show curated by a mega-collector could demonstrate to buyers how to mix things you wouldn’t necessarily imagine coexisting harmoniously. “It’s educational, a way of showing clients how you can live with art and design and accessories,” says Grajales. “Together, they make this incredible ensemble.”

Ingrassia has learned what works by listening to painters and sculptors. “Artists like to see their work in the context of design and other artists,” she says. “And I think that’s the beauty of the show.” 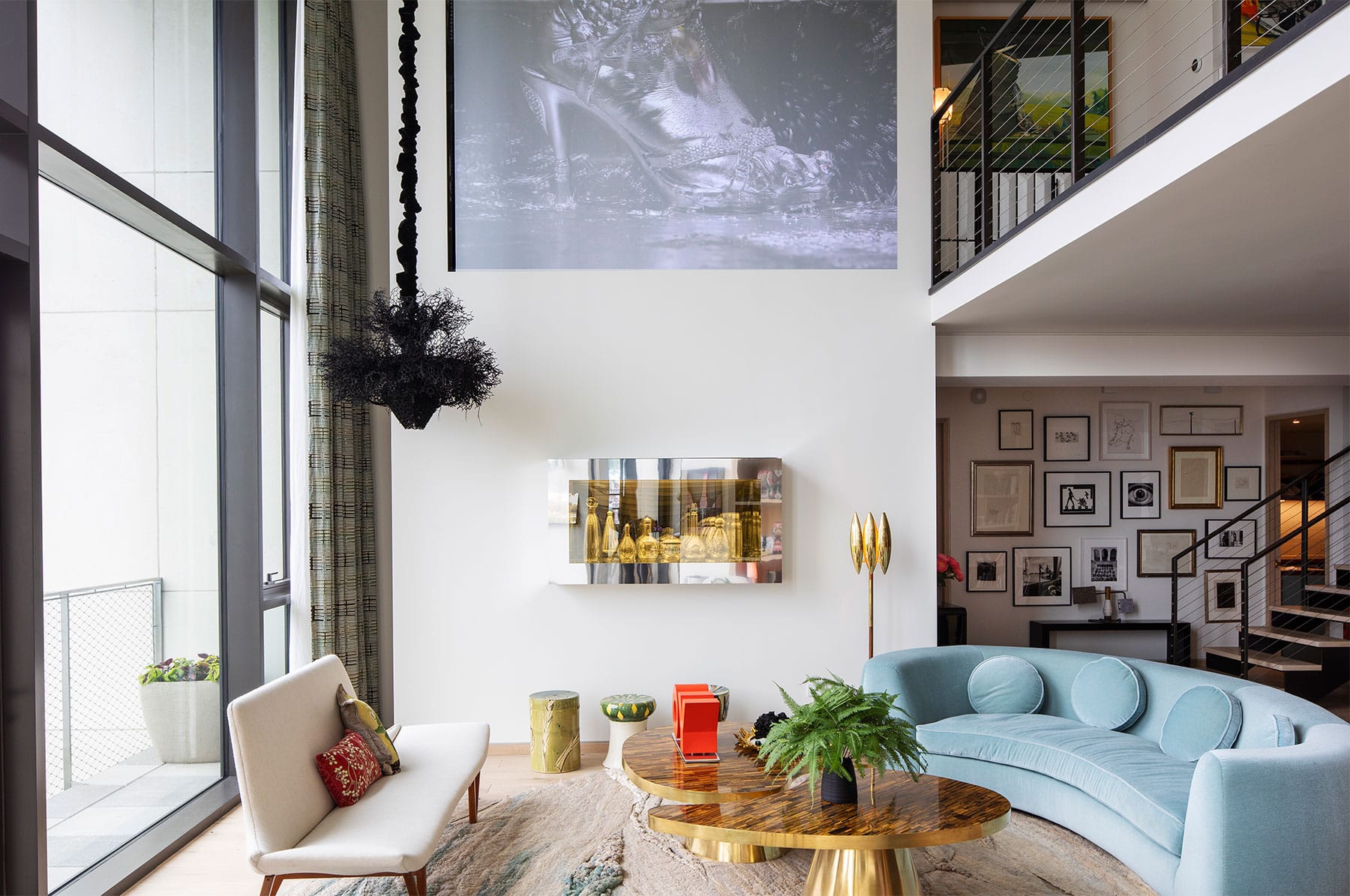 A Marilyn Minter video installation is projected on the wall of the living room above a Josiah McElheny vitrine and 1940s ceramic stools from 1stdibs. The black hanging sculpture is by Petah Coyne, and the sofa is by India Mahdavi. 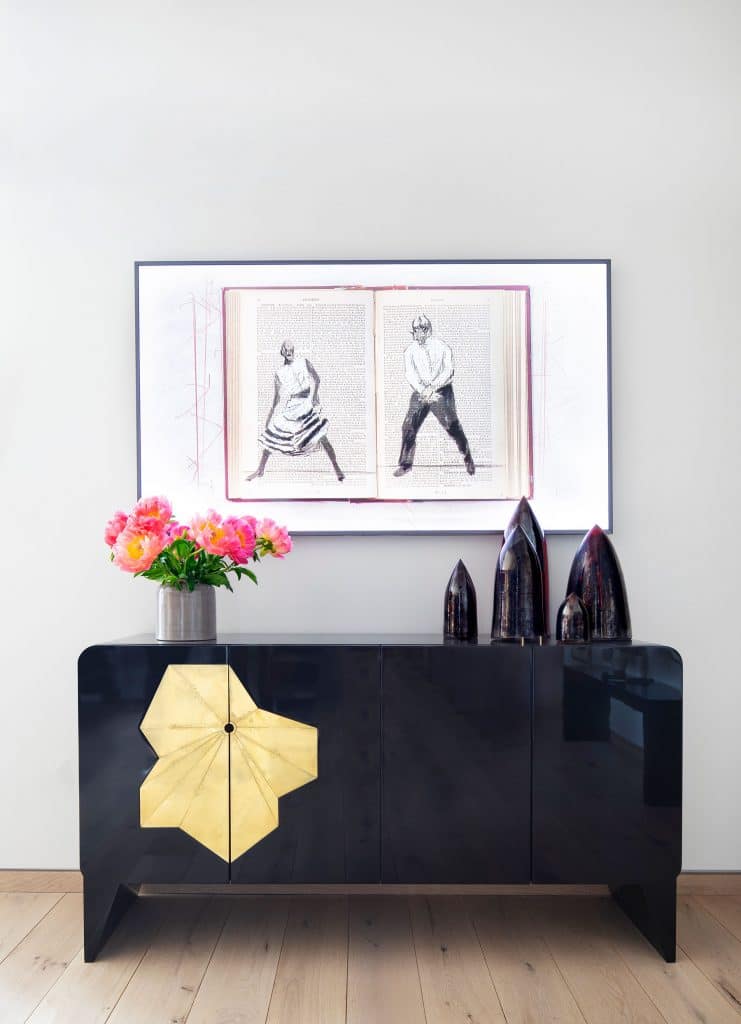 A William Kentridge artwork is mounted above a Gloria Cortina cabinet and ceramics from Cristina Grajales Gallery.

Ingrassia’s two-story Brooklyn Heights apartment overlooking lower Manhattan is a more private but no less impressive showplace. Located in a new building not far from the townhouse where her family had lived for years, it constitutes a downsizing of sorts, but it’s spacious and art-filled by any standard.

Many of the stunning furniture and objects are by Grajales artists, including Cortina, Cristophe Côme, Amanda Weil and Stefan Bishop. There are also pieces by creators represented in the collection and exhibitions of the Brooklyn Museum, such as Takashi Murakami and Deborah Kass. This overlap makes sense, given the mind meld Ingrassia has with the museum’s director, Anne Pasternak, and her long service to the institution.

Contemporary female artists are very well represented in the Ingrassia collection. Amy Sillman, Kara Walker and Barbara Kruger are some of the marquee names. And there’s a massive video installation by Marilyn Minter, the subject of a recent retrospective at the museum, in the living room, where it plays 24 hours a day over Josiah McElheny’s sculptural vitrine Reflected Infinity, 2005. 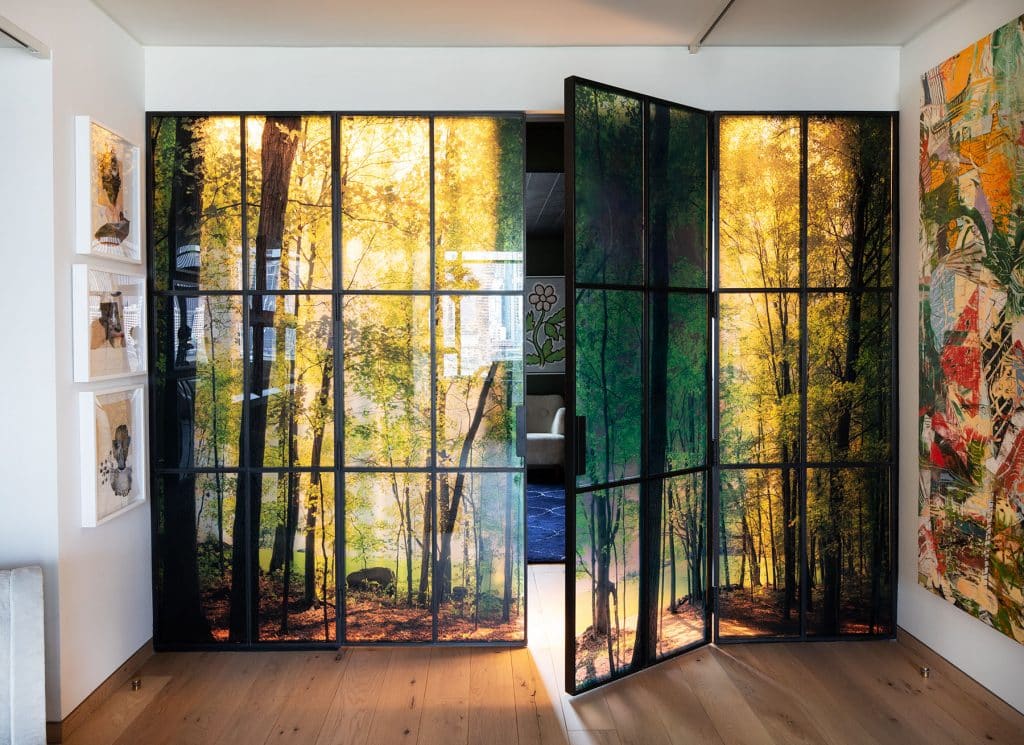 The Ingrassias lend out many of their works, and it can feel like a homecoming when one of them boomerangs back. Right now, Ingrassia is happy to welcome Nicole Eisenman’s Selfie, 2016, dominated by a big, humorous eyeball. “That piece has been in several shows,” she says. “I bought it and then never lived with it, because it went from show to show.” 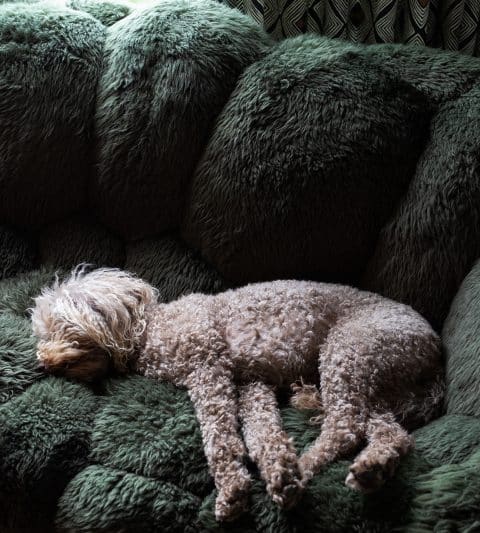 Overall, the display has changed with the gleaming new residence. “It’s a very different place from our old house,” says Ingrassia. “Fewer walls, bigger walls, fewer rooms. I think it’s definitely more contemporary. Objects that we really didn’t have room for before can go here, and the space lends itself to big work.” (There are hundreds and hundreds of things that can’t fit, though, and they reside either in storage or in the family’s homes in Connecticut and Florida.)

As far as the theme goes, Grajales says, “[the show is] a series of vignettes, which are curated to engage and encourage conversation between art, design and space. As you walk through the exhibition, you ‘encounter’ relationships between form, function and meaning.” Ingrassia has a simple rule for her collecting, one that certainly applies to the Grajales show, as well. “First you have to react to the art,” she says. “If you don’t react to the art, then what’s the point? But I do think that it’s how it all comes together that makes it really interesting.”