Everything You Ever Wanted to Know About Stripes 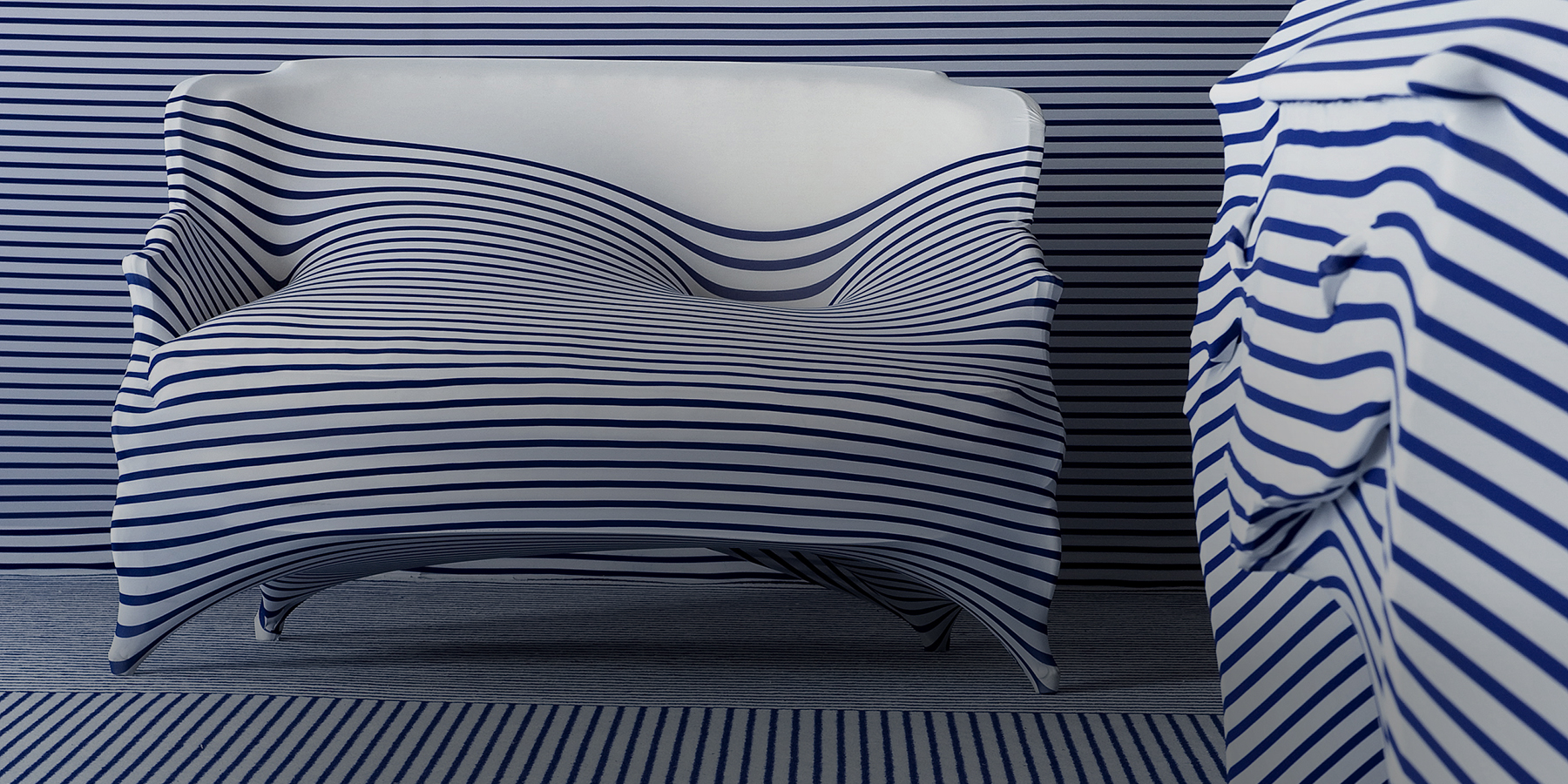 A captivating book by a former Metropolitan Home creative director reveals why stripes are more than a timeless design but a way of seeing the world. 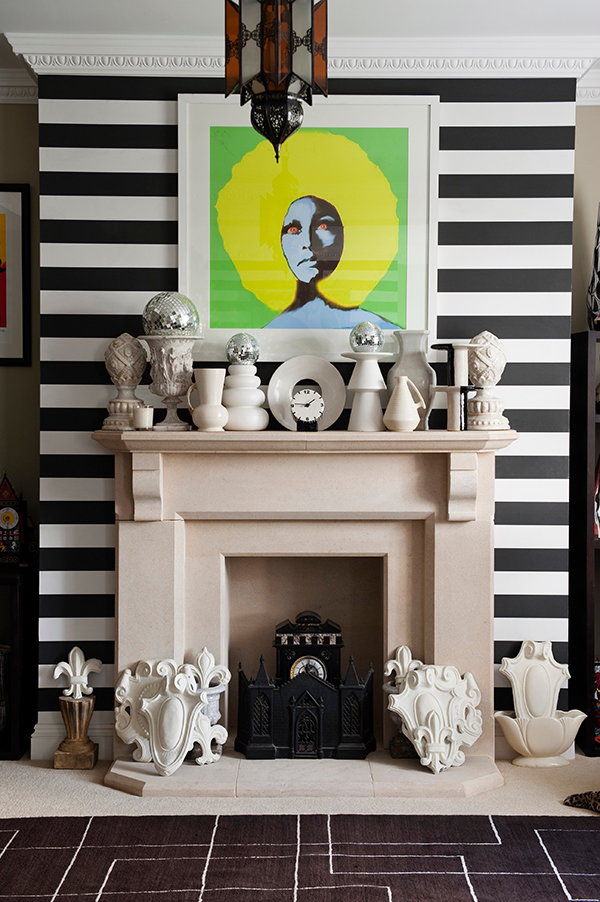 February 13, 2013In her new book, Stripes, Linda O’Keeffe draws together examples of the timeless pattern in art, nature and interiors, including the house of Sue Timney, a designer who’s worked exclusively in stripes since the 1970s. Photo by Andreas von Einsiedel, all images courtesy of The Monacelli Press. Top: In 2004, Elle Décoration commissioned Jean Paul Gaultier, along with Dutch designer Jurgen Bey, to cover a room and its Roche Bobois furniture in striped Lyrca. Image courtesy of Roche Bobois

For me there is no dividing line between art and fashion, there is just one giant continuum,” explains Linda O’Keeffe, the former longtime creative director of the late, lamented interiors magazine Metropolitan Home. Since the magazine’s close, O’Keeffe has skillfully found a new niche, authoring captivating books on decorating and design, including Brilliant: White in Design in 2011 and, more recently, Stripes: Design Between the Lines in 2012 (each published by Monacelli Press). Both have become indispensable design bibles — especially for those many readers who still miss the magazine.

With its bold, graphic colors, Stripes stands in marked contrast to Brilliant, which showcased the zen qualities of white. “I like to think of them as bookends,” O’Keeffe explains. Given today’s Internet frenzy, we all know that when undertaking a design project, it’s ridiculously easy to go online and search for inspiring images — the right sofa, a certain mirror or even, yes, the perfect stripe. But the pictures found in our search results are usually uncredited and nearly always randomly collected into fairly meaningless sequences. Which is exactly where O’Keeffe’s book comes in. Produced by a sophisticated and knowing eye, one with years of experience looking at design, the collection of images is both cogent and concise.

Yet one can’t help but wonder: Why stripes, of all things? “Stripes are timeless,” O’Keeffe writes in her introduction. “There is no sense of them dating in any way.” And they boast some serious history, as O’Keeffe notes: “The earliest form of decorative striping shows up in Paleolithic caves, alongside mineral-pigment drawings of bison and antelope, as clusters of serpentine-shaped lines or flutings thought to be the tracings left by fingertips dragged across wet clay.” 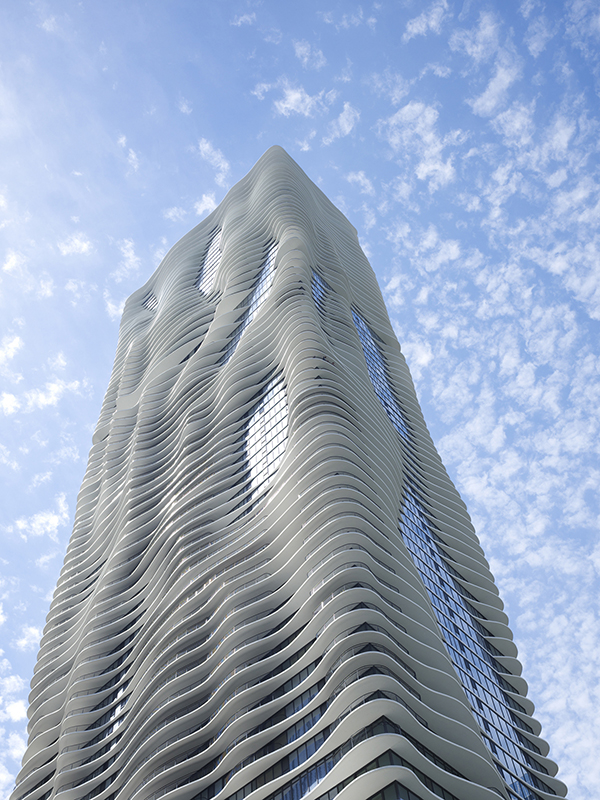 Mapping the timeline of stripes in a visually exciting sequence of photos, carefully edited from the files of today’s top photographers, and sensibly dividing the book into chapters based on stripe types (vertical, horizontal, optical and so on), O’Keeffe shows how stripes are part of a universal design language the world over.

As in her previous book, she also uses the work of some of the world’s most accomplished artists to make her point. Here, we can luxuriate in pieces by the iconic British artist Bridget Riley, known since the 1960s for her optical explorations, and in the purity of consummate minimalist Agnes Martin’s subtle horizontal and vertical lines. Artist Peter Rittmaster’s Diet for America, an American flag incorporating slices of bacon as the stripes and fried eggs as the stars, becomes a slick social comment on the American diet, as well as an illustration of how stripes can combine in both art and nature.

Architects, too, have their fascination with stripes, in particular with their three-dimensional possibilities, as O’Keeffe demonstrates to often startling effect. The book shows off Chicago architect Jeanne Gang’s rippled 82-story Aqua apartment tower (2010) in the Windy City, whose paper-thin balconies form undulating lines around and up the exterior, and the bright red Nebuta House in Japan, which has a red ribbon-like facade designed by the Vancouver-based architecture firm, molo.

As for wild life, we are all well aware of stripes’ presence in the natural world, but O’Keeffe clearly spent a lot of time researching unique and unexpected examples — a photo by Finnish artist Esko Männikkö, say, depicting a graphic close-up of a zebra tail. And while we might expect parallel lines to appear in Death Valley’s ridges of sand, who would have guessed that icebergs can also come in stripes? 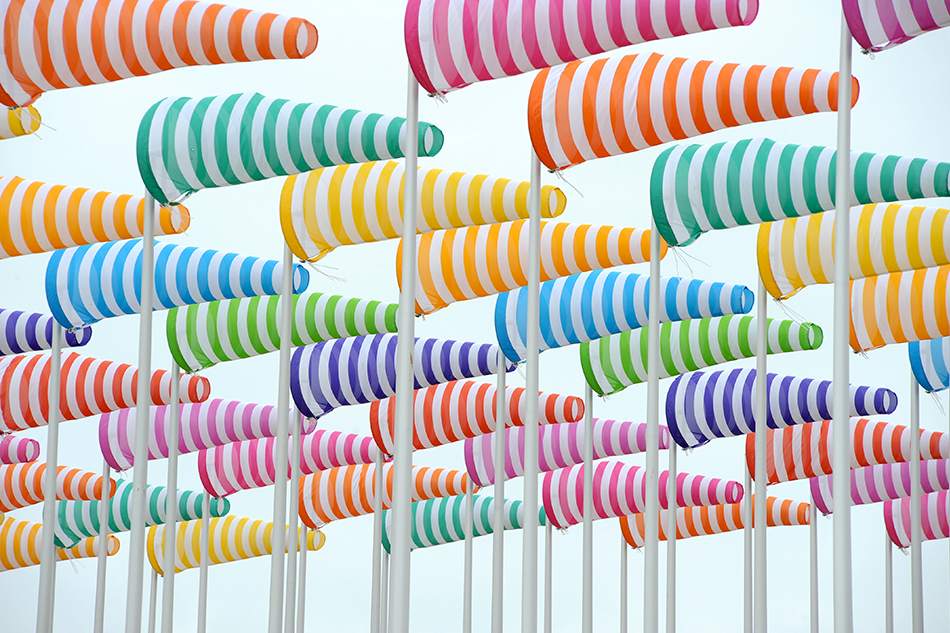 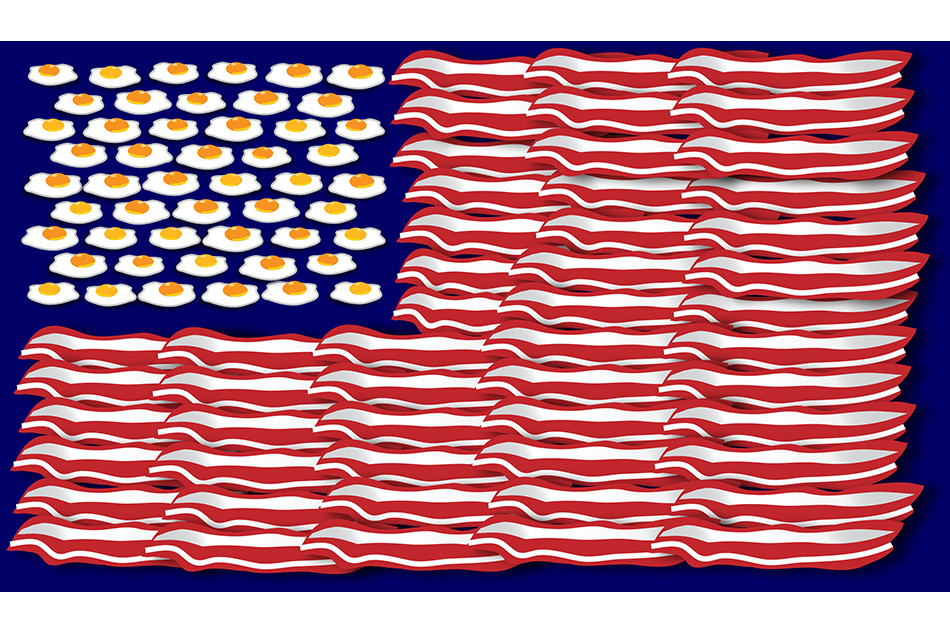 In Diet for America, 2009, the artist Peter Rittmaster sought to make a visual statement about the country’s consumption. Photo by Antoine Bootz 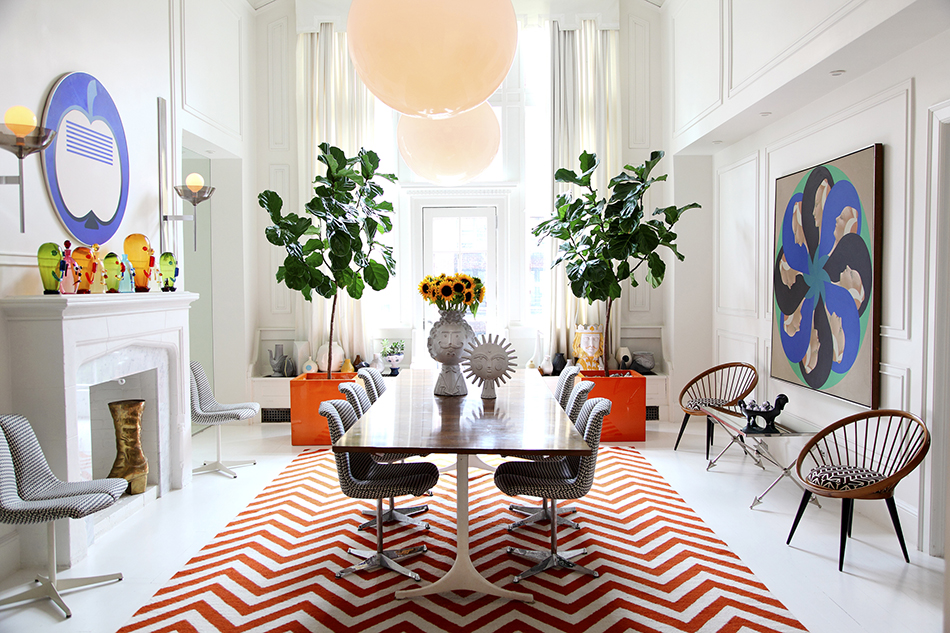 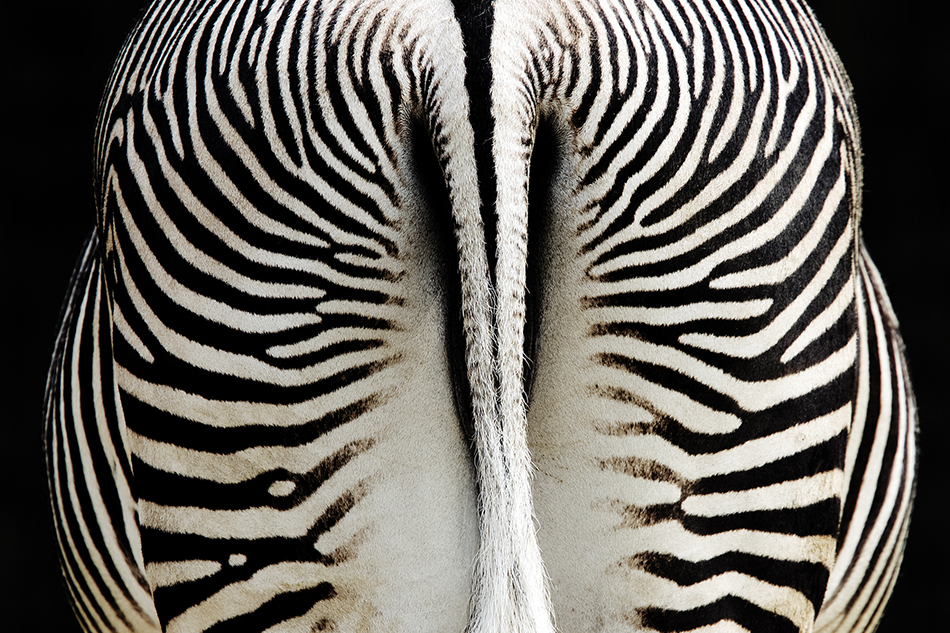 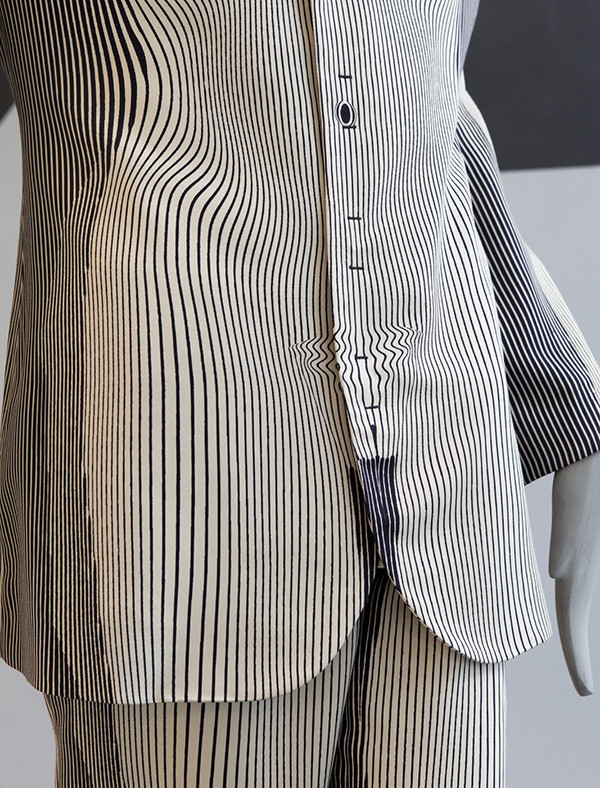 Using curved stripes, Jean Paul Gaultier superimposed the outline of a female body onto a loose-fitting pantsuit in his 1996 spring/summer collection. Photo by Antoine Bootz

Though inspirational in a more abstract sense, these images add further value and utility to Stripes, complementing the idea-generating interiors images that O’Keeffe’s pulled from her many years in the design world. Traditionalists will enjoy the oversized, Pierre Frey–striped ottoman in interior designer Jay Jeffers’s formal living room, while Jonathan Adler and Simon Doonan’s Greenwich Village apartment, anchored by a pair of colorful zigzag carpets, perfectly exemplifies Adler’s brand of “happy chic.”

Perhaps most innovative of all, O’Keeffe points out the pattern’s power: Different stripes in different contexts can carry disparate — and even contradictory — meanings. They can represent a circus tent idea of fun, as well as the seriousness of a prisoner’s uniform. On a dancer’s costume, they can lengthen the movement of an arm or leg, but heaven help the overweight beachgoer in a horizontally striped swimsuit! We think we know pinstripes, but as O’Keeffe writes, French couturier Jean Paul Gaultier brought a fresh eye to the genre by “superimposing the ghostly outline of a voluptuous female body, in the form of black stripes of various densities, onto a masculine loose-fitting pantsuit.”

Throughout the book, O’Keeffe shows off an incredible diversity of stripes — and their meaning — with style, wit and humor. Beyond a shadow of a doubt, she proves her conclusion that “We truly live in a parallel universe.”