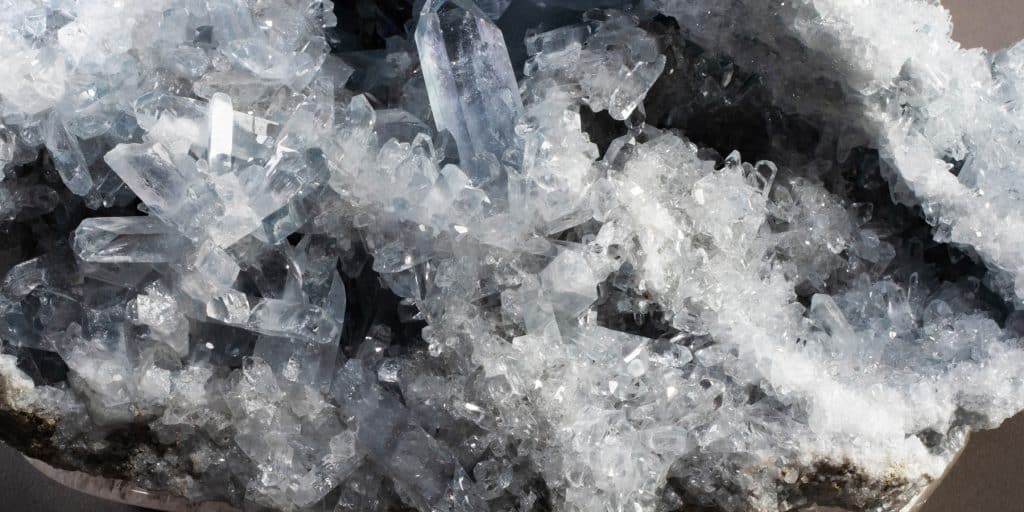 The young brand’s mineral-inspired decor, jewelry and furniture are making waves in the design community.

When most people think of Montana, its glorious hiking, rafting, skiing and fishing venues come to mind. But Montana’s nickname is the Treasure State, owing to its rich deposits of gold, silver, copper, quartz, amethyst, sapphire, agate and the like. These along with other minerals carefully sourced from six of the world’s seven continents (excluding Antarctica) are found in the jewelry, furniture and objets d’art painstakingly handcrafted by Studio Greytak, in Missoula, and seen in the 1stdibs Gallery in New York’s Chelsea.

John Greytak, who founded the studio two years ago, never thought he would be the head of a team of skilled craftspeople. It’s a role that simply evolved; he is completely self-taught.

Greytak grew up in Montana, the son of a wheat farmer who once had two million acres under cultivation. On summer vacations, he was expected to do manual labor in the family business. “I hauled equipment from one of our family’s ranches to another, ran grain elevators and loaded semis taking grain to port,” he recalls. When he wasn’t working, he went hiking, collecting natural specimens that caught his eye — fossils, antlers and minerals.

After he attended college, in Bozeman, Greytak moved east and started a family. But he wanted to raise his children in Montana, so he relocated everyone back there. He decided to build a new homestead, which would become the 8,200-acre Bearmouth Ranch. Before hiring architect Tony Moretti and interior designer Renee Brown, Greytak designed his future home on the back of a napkin to create a large rustic lodge in true Western style.

Knowing Greytak’s interest in the natural world, Brown encouraged him to attend the annual Tucson Gem and Mineral Show, which has some 4,000 vendors. “It’s the largest mineral show in the world and attracts fifty-five thousand people, who spend fifty billion dollars there,” Greytak says. “I went, and I got gem fever.” He brought home minerals from all over the world.

Brown then sought out local artisans to incorporate some of the minerals into the decor. “I had the love of minerals and gemstones,” Greytak says. “Rather than being a side dish, I wanted them to be the centerpiece of a room.”

After building the ranch, Greytak decided to keep working with the artisans, whom he had come to admire, making furniture, jewelry and objects for others with the minerals in his collection. Thus was born Studio Greytak. “I wanted to bring pieces into homes in a more sophisticated way,” he explains. He calls what they do a “conceptual art project” exploring the “intersection between design by nature and design by humans.”

Today, Greytak has a team of 30, which includes designers, artisans, jewelers, marketers and photographers who all take their inspiration from his minerals. How did he find them? “We have an abundance of talent in this small town in the Rockies,” he says. “It’s a small enough community that you get to know the people with talent.” Their range of skills includes silversmithing, goldsmithing, gem cutting and setting, leafing, sculpting, bronze casting, carpentry and leather working.

“Generally, I buy the minerals and then lean on the creativity of my team to help with the designs,” Greytak says.

He has developed relationships with mineral vendors around the world and telephones them frequently. He is close to a family of Himalayan miners who dig quartz out of the ground by hand at an altitude exceeding 4,000 feet. Recently, they told Greytak they needed money to build a school and asked if he would buy a portion of their personal collection of Himalayan quartz. He immediately agreed. “These are powerful friendships,” he says.

Because all the works are tailored to the particular minerals used, a single piece can take up to nine months to make. “The first step is to find out what the mineral is saying,” explains Spider McKnight, the studio creative director. “What does this piece want to do?” The Iceberg table, for example, was inspired by a Himalayan crystal that was so clear it resembled ice, and it inspired Greytak to create a table featuring the mineral in a sea of glass that allows for a view of the mineral from above and below. In this case, the crystals are rhombohedral and violet, forming a sparkling, undulating landscape of ice-like spikes.

“Our discussion was how to make a two-hundred-pound mineral seem like it’s floating on a glass table,” McKnight says. “That takes a lot of engineering.” The solution was to support the geode with a cradle of solid bronze that was in turn supported by a frame of burl walnut. The center of the glass top was cut open to embrace the stone.

The design process is time consuming. A design normally goes through several revisions on paper before Greytak approves the final drawing. “I have the final say, but everyone in the studio gives input,” he says. Then engineers study the drawing and work with the craftspeople to build a mock-up, which is carefully reviewed. Greytak says a piece is often reengineered at this point and reviewed again. Only then is a prototype made. Once Greytak approves it, the artisans can begin. “It’s all about the journey,” he says.

Each product is unique. The Skyline Glo lamp is a square hollow tower whose sides are made of translucent butterscotch-colored aragonite. The light-bulb socket is inside, so the stone glows from within when the lamp is lit.

The Mango Glacier screen consists of 12 translucent slices of Brazilian agate set in a checkerboard frame made of mango wood. “When the screen is placed in front of a window, the agates dance in the sun, which adds to their energy,” McKnight says. “They are living things, and light changes them.”

Almost every piece of jewelry incorporates several gemstones and comes with its own elaborate stand so it can be admired as a sculpture when not being worn. One necklace employs tigereye, jade, amber, opal and citrine. A men’s bolo tie features Montana agate with turquoise and quartz embellishments and is displayed on a stand with a malachite base.

Minerals are believed by devotees to have myriad spiritual qualities, which Studio Greytak shares with its customers. “People are fascinated by it,” says Greytak, who is passionate about working with these natural wonders. “The more you learn about minerals’ having a life and energy all their own, the more you want to learn.”