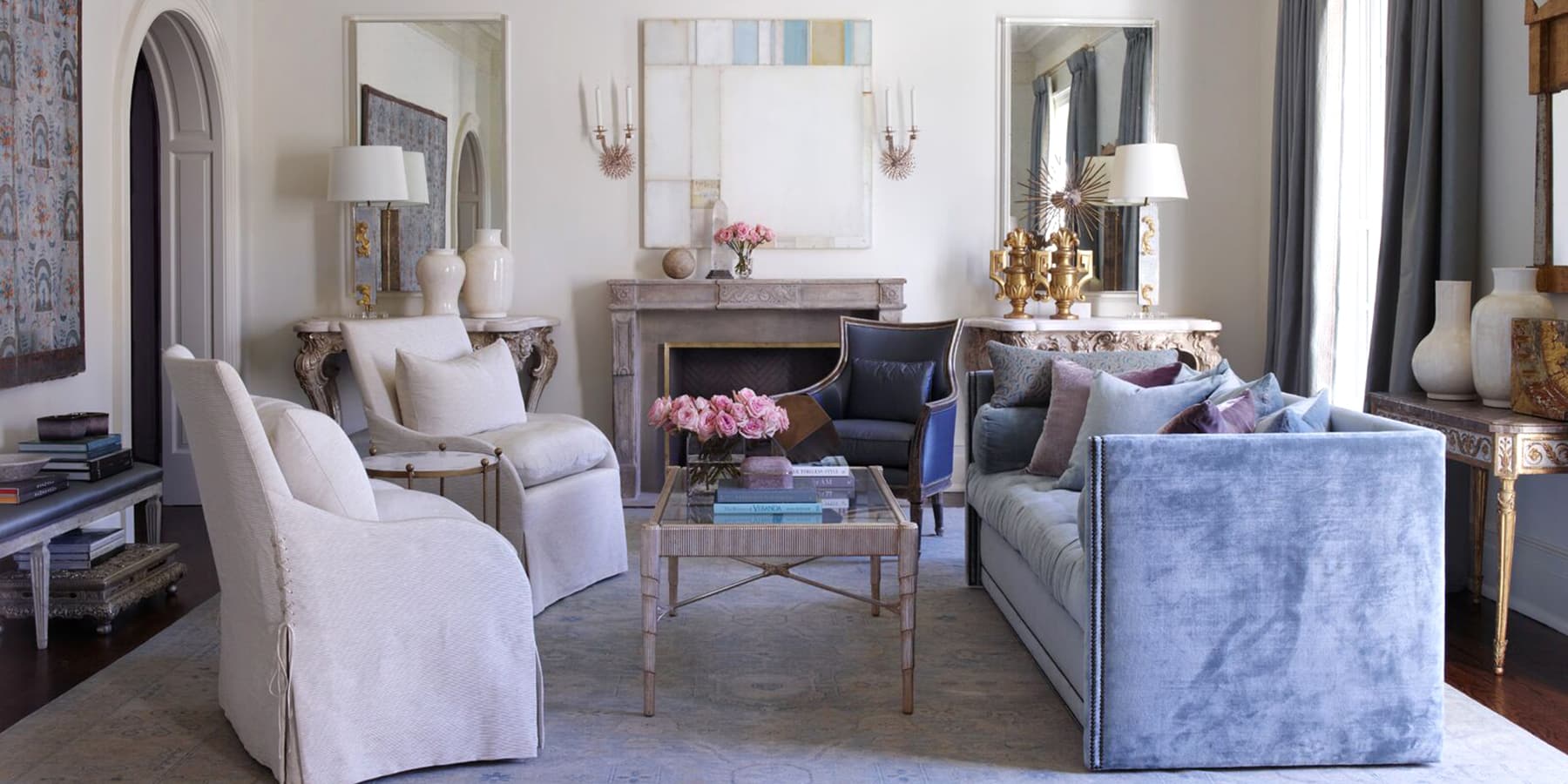 The Atlanta-based designer specializes in residential projects and home decor lines that are infused with a bright, welcoming spirit. 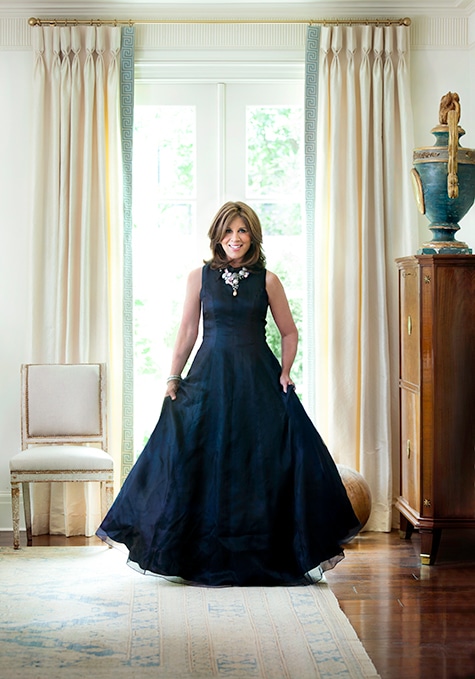 Suzanne Kasler, pictured in her Atlanta home, had a commercial design practice in Indianapolis before her husband’s job took them south. The designers she interviewed with in Atlanta urged her to start her own firm (portrait by Erica George Dines). Top: This Nashville living room features a studded sofa and pair of Lotus chairs by John Saladino and a Mansour rug (photo by Simon Upton).

There’s something ineffably comforting about a Suzanne Kasler interior. “People feel good in my spaces, and they’re not sure why,” Kasler says. Their reaction doubtless has something to do with her decor’s grounding in 18th- and 19th-century classicism, which creates a familiar, reassuring sense of tradition. Yet, because she deploys the style with a light hand — mixing in modern pieces and leaving space around objects to achieve an uncluttered airiness — her rooms are finely finished while sidestepping overbearing formality. They invite relaxation.

Her clients’ ease is also largely attributable to Kasler’s soothing palette. Although she’s been known to punctuate spaces with strong color — a rich grayish blue on the chairs, drapes and ceiling of her Atlanta show house dining room; navy lacquer cabinetry in a Maine kitchen; raspberry walls in a bedroom at the Smoky Mountain resort Blackberry Farm — she more commonly favors the entire spectrum of ivories and creams, accented by the strategic use of such soft shades as pale pinks, blues, lavenders and celadon.

Kasler also creates a sense of reassuring constancy by deftly manipulating the way color progresses from room to room.Throughout the interiors of a Nashville home, for instance, she subtly modulated a variegated palette of blues and purples. She introduced a pale powdery blue in the entry, then moved to a deeper blue on the sofa of the living room, where she insinuated lilac toss pillows and a purple-tinged blue armchair. By the time the dining room is reached, she has laid the groundwork for the explosion of lush plum shades on drapes and dining chairs. 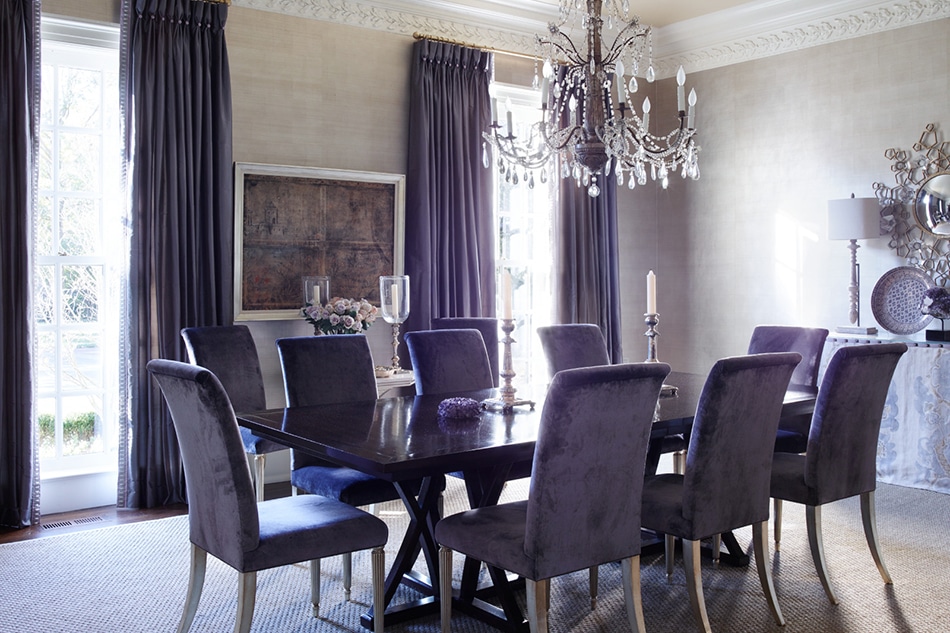 In this Nashville dining room, an early 19th-century Italian silver-gilded crystal chandelier from Demiurge hangs over a custom Gerard Kelly table. A Thomas Pheasant for Baker mirror is mounted over the custom console. The pewter tea-leaf wall covering is by Gracie. Photos in this slideshow by Simon Upton 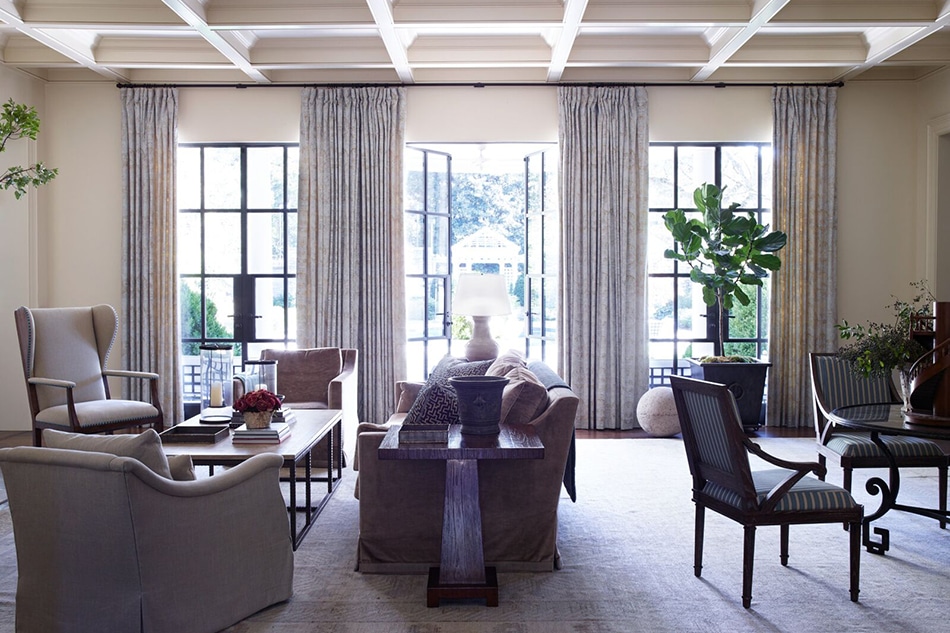 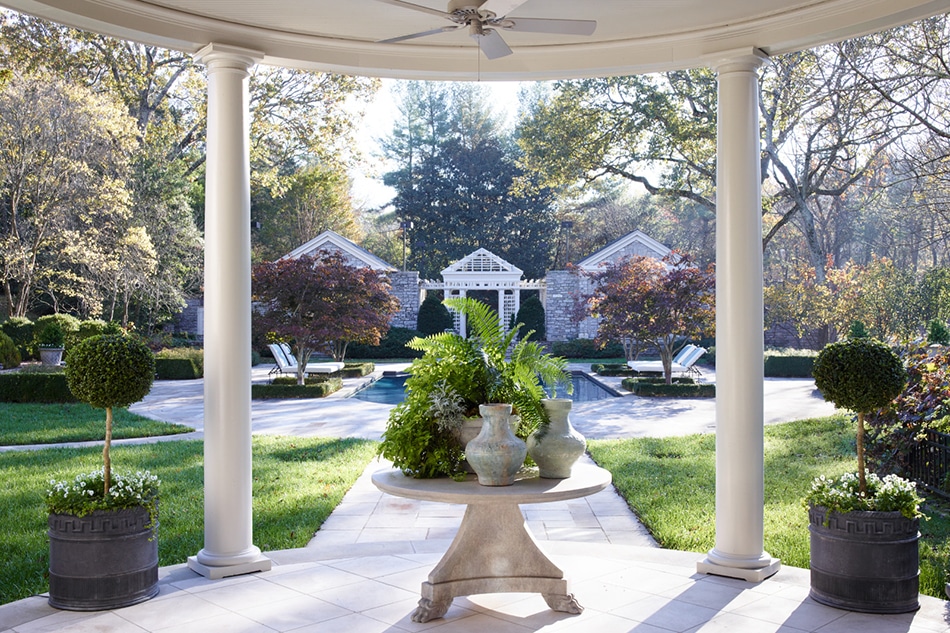 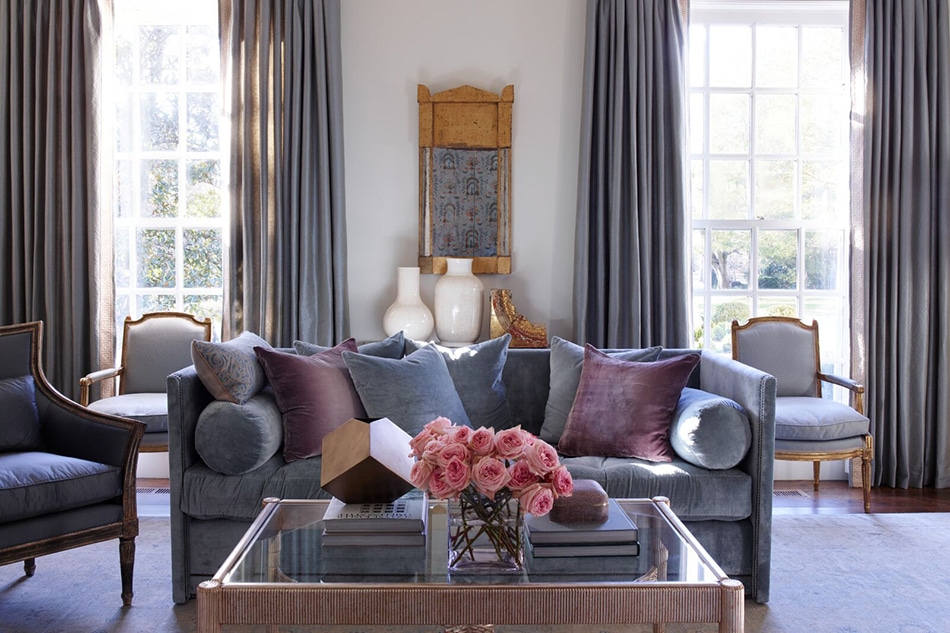 In this Nashville living room, John Saladino‘s Studded Shelter Sofa is upholstered in Ralph Lauren fabric and topped with a mix of custom and Fortuny pillows. The silk canvas curtains are by Nancy Corzine. 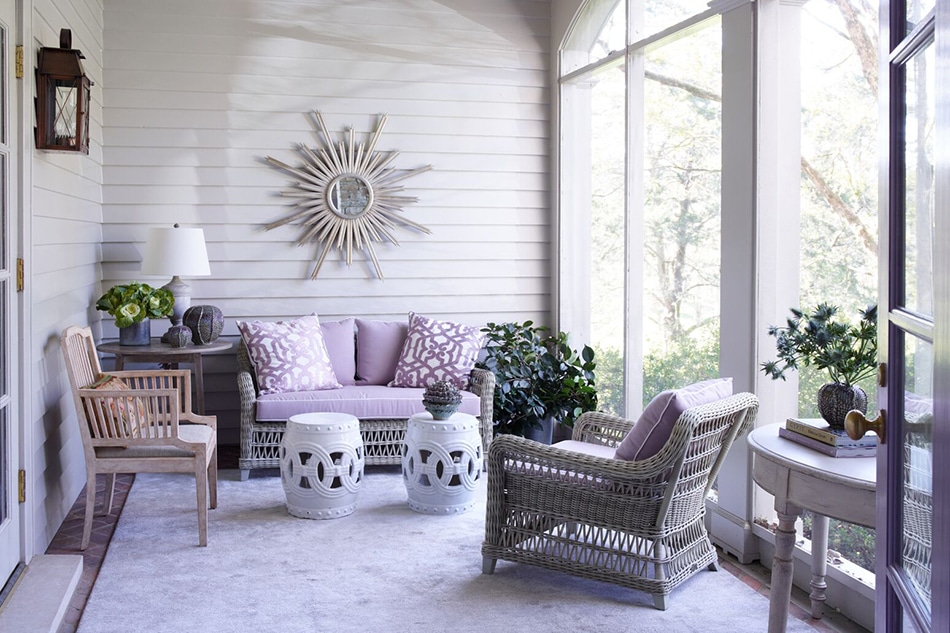 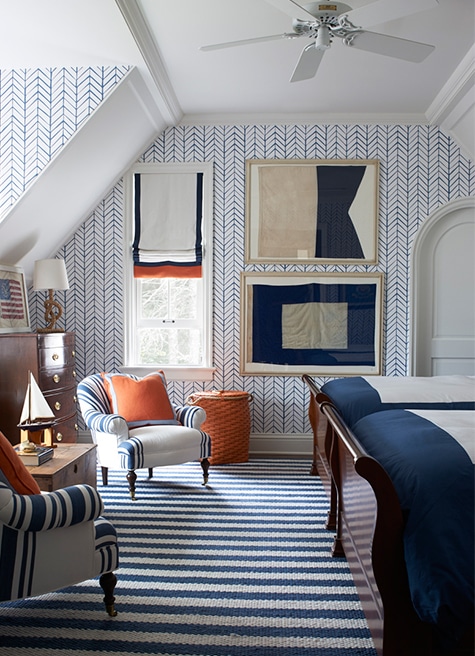 Framed naval flags hang on the wall of the boys’ room of this Maine home, which features Serena & Lily’s Feather wallpaper in Denim and a ca. 1870 English chest. Photo by William Waldron

Another comforting element that pervades Kasler’s interiors has nothing to do with interior design. That is Kasler’s own unpretentious, sunny personality. She manages to infuse rooms with her own upbeat approach to life, so that they are experienced as bright, quietly spirited and welcoming — like her. Kasler credits her perpetually genial attitude to her parents. “Regardless of what happened, they always had a positive outlook,” she says of her father, James, and mother, Martha. “We went through a lot of difficult times, but they always looked forward.”

Kasler was born in Waco, Texas, and grew up primarily in Indianapolis, which she considers home. But being a child — along with siblings James and Nanette — of a serviceman, upheaval was frequent. “In my mind, I could see creating ideal spaces to live in,” she says. That may be what propelled her, after pursuing liberal arts studies at Butler University in Indianapolis, to transfer to the University of Cincinnati’s College of Design,  Architecture, Art, and Planning, where she earned a Bachelor’s degree in interior architecture and design.

Kasler established a commercial practice in Indianapolis in the 1980s, designing offices for law firms and companies like IBM. This brought her into contact with the office-furniture behemoth Steelcase, where she met her husband, John Morris, a marketing executive for the firm. Residential commissions for many prominent Indiana families also came through a small interior design shop she ran in the city.

In 1991, Morris was transferred to Atlanta. Kasler went with him, continuing to undertake projects in Indianapolis while seeking work with firms in her new home as well. But since she already had an impressive portfolio, she recalls, “all the designers I interviewed with kept saying that I should really be on my own.” In 1995, she took their advice and hung out her shingle. “I decided to focus on residential interiors, doing only a few projects at a time,” she says, “because Alexandra [her first daughter] was still small.” 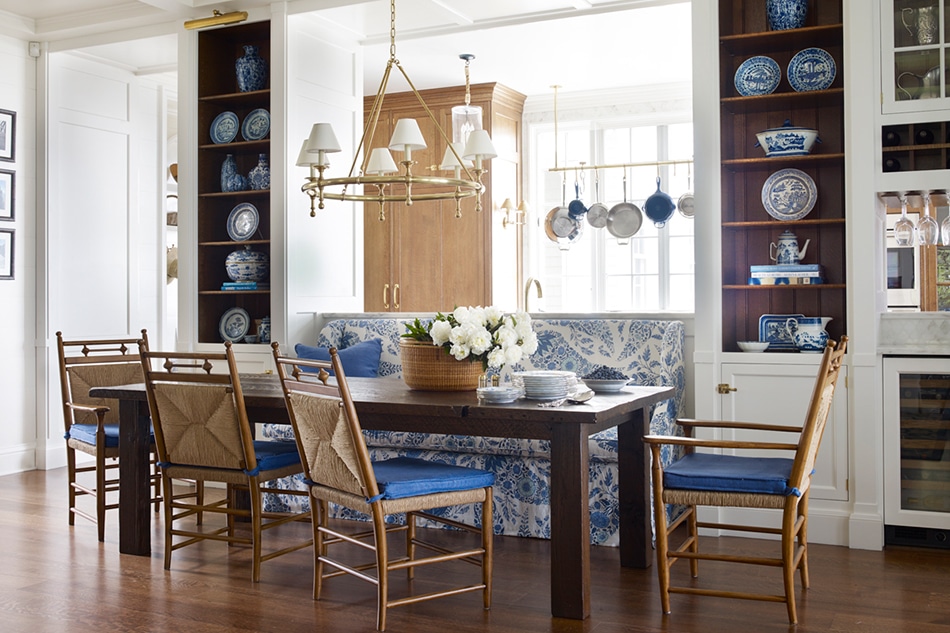 This breakfast area in a Maine home features a collection of antique Canton porcelain, displayed on shelves flanking the custom banquette. The Jeff Soderbergh dining table is surrounded by Charles Fradin rush chairs. The chandelier is by Circa Lighting. Photo by William Waldron 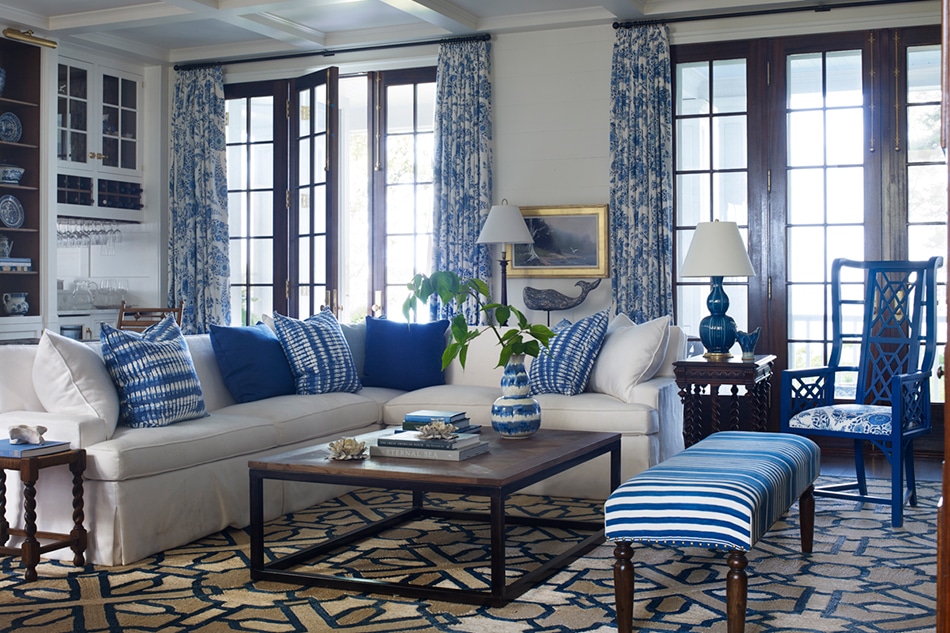 In the Maine home’s living room, a Hickory Chair sectional is paired with a Mary McDonald for Patterson Flynn Martin area rug. The Delft-print draperies by Raoul are from Grizzel & Mann. Photo by William Waldron 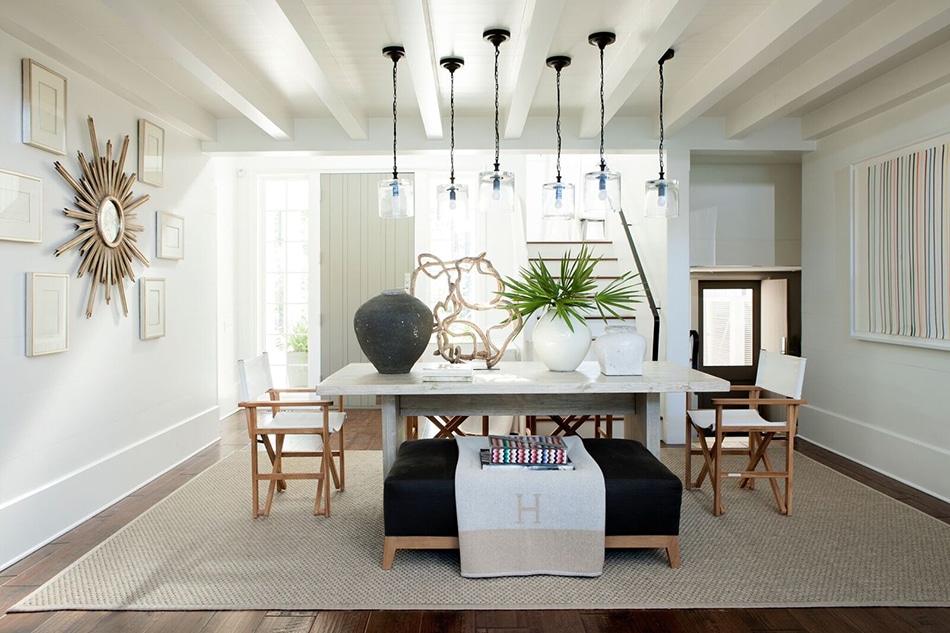 This dining room in a Ken Pursley–designed home in the South Carolina resort community of Palmetto Bluff includes a gray wood Parsons table surrounded by Suzanne Kasler campaign chairs. The pendant lights were purchased at an antiques market. The wooden sculpture on the table is from Huff Harrington. Photo by Erica George Dines 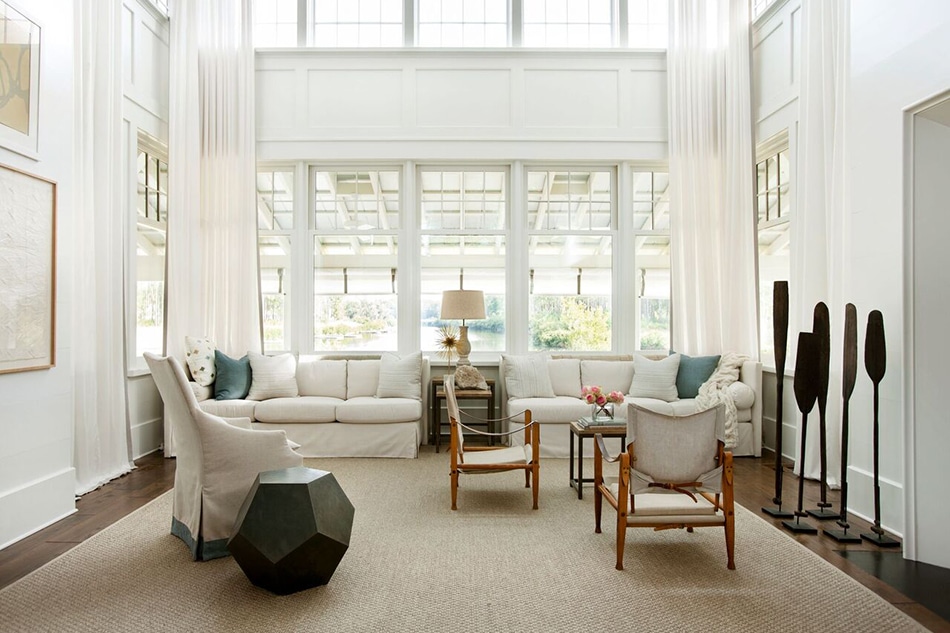 The living room contains a pair of vintage Kaare Klint chairs and a set of vintage oars. The geometric zinc stool is from Bungalow Classic. Photo by Erica George Dines 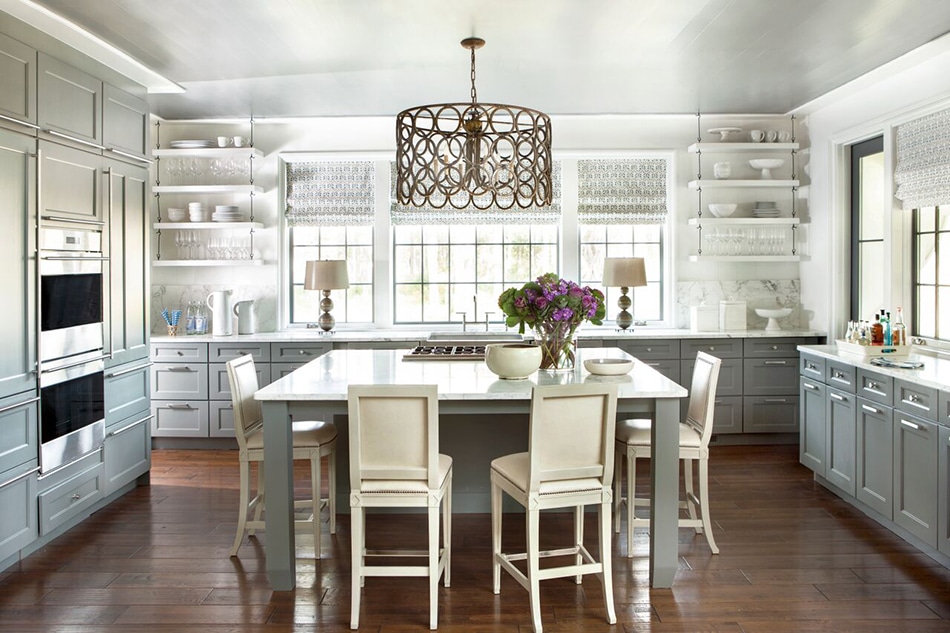 A vintage light fixture hangs over the kitchen island, which is surrounded by counter stools from Hickory Chair. Cake stands and wine glasses are displayed on the open shelving flanking the windows. Photo by Erica George Dines 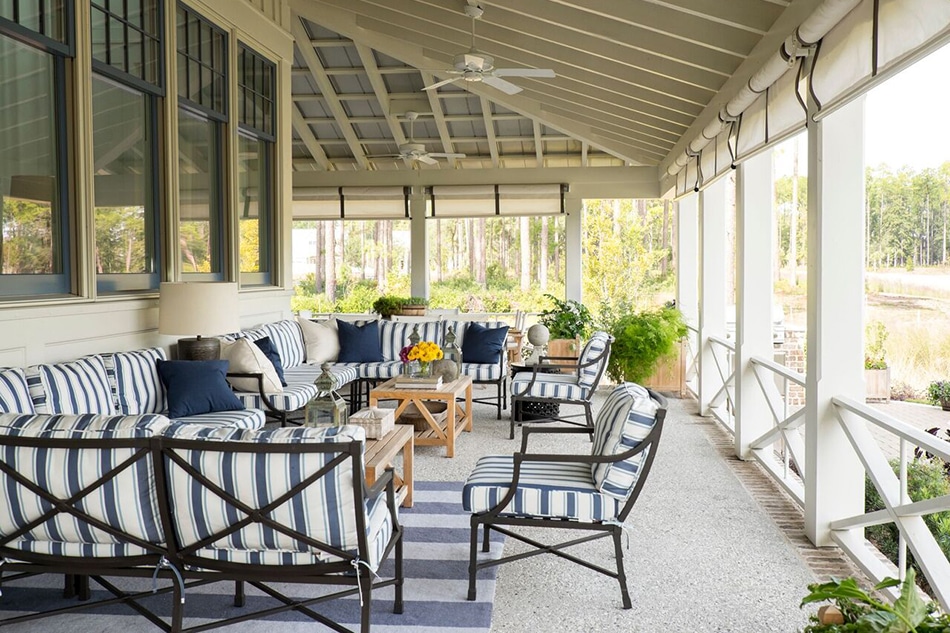 The Sunbrella-fabric-upholstered sectionals and armchairs on the porch are by Suzanne Kasler for Ballard Designs, as is the striped area rug. Photo by Erica George Dines 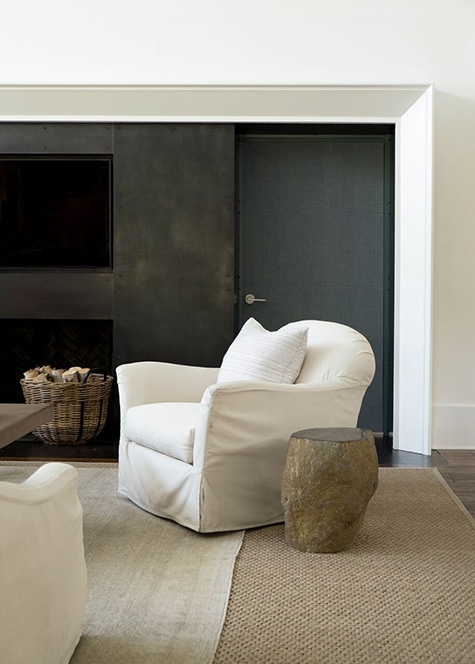 A lounge chair by Verellen is paired with a stone stool from Bungalow Classic in this Palmetto Bluff living room. The firewood basket is from an antiques market. Photo by Erica George Dines

She now runs a 10-person office, working on 12 to 15 projects simultaneously and juggling interiors and product design (as well as publishing two monographs with Rizzoli, in 2009 and 2013). In many respects, however, her business is still the same. “I don’t want to be any bigger because I want to remain involved in design,” she says. “I love design and creating.”

These days, Kasler seems to be everywhere at once. She enjoys copious press coverage and has won numerous awards, as well as a devoted clientele for her Atlanta-based firm. In addition, few designers are as active in licensing. For example, last January, La Cornue unveiled of an array of custom colors it had developed with Kasler for its famous enamel stoves. Among the many endeavors she is engaged in currently are a third collection for Hickory Chair Furniture (the original debuted in 2008), with 30 new pieces due out in spring 2018, and new fabric and trim designs to be launched simultaneously for the collection she began with Lee Jofa in 2011. Each season, she adds items to her already extensive home decor lines for the Ballard Designs catalogue (a white outdoor collection debuts this spring), as well as lighting for Visual Comfort (fall 2017 and spring 2018). In fall 2018, Kasler’s third book for Rizzoli will be published.

“It’s all about being in the moment,” she says, “and at the same time having a vision for moving forward.” With regard to her interior design work, she believes “the key to staying relevant is to evolve, embrace change. My interiors are becoming more and more edited. That seems to be what everyone is responding to.” 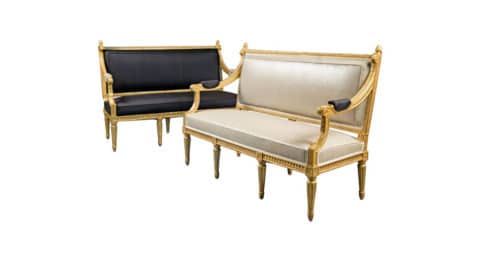 “I am always inspired by French antiques, particularly from the Louis XVI period. The details of rectangular back and down-curving arms, along with the tapering and fluted legs, make these canapés especially beautiful.” 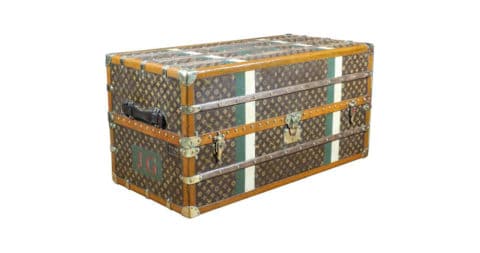 “It’s hard to beat the classic glamour of a monogrammed Louis Vuitton trunk!” 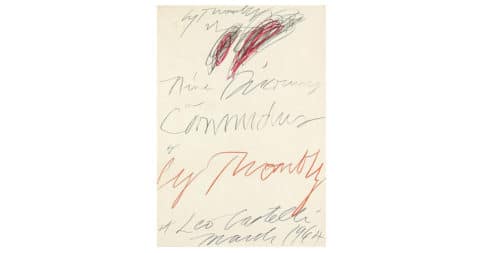 “I love anything by Cy Twombly! This signed poster is no exception.” 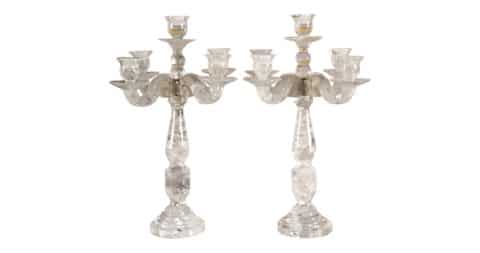 “These one-of-a-kind candelabras made of rock crystal are incredibly glamorous!” 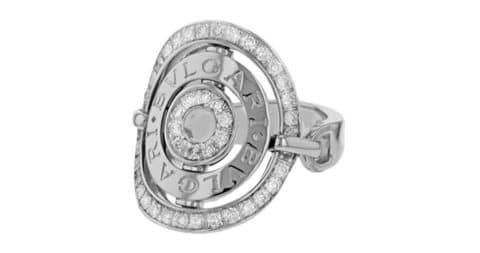 “I adore this Bulgari diamond ring! It is light and airy but still makes a statement!” 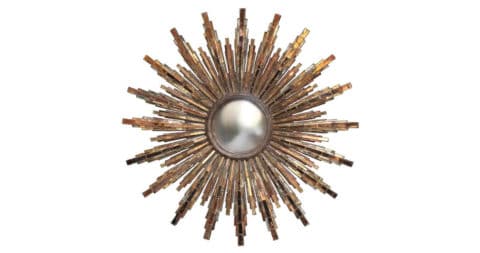 “Each piece by Line Vautrin is a true work of art, something to covet. Vautrin is a real artisan, whose vision and creations are the epitome of Parisian neoromantic chic.” 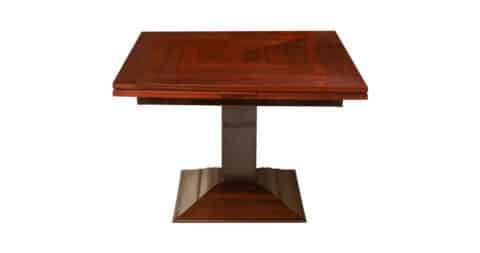 “I love the shape of this table — a true reflection of the craftsmanship of the legendary Émile-Jacques Ruhlmann.”