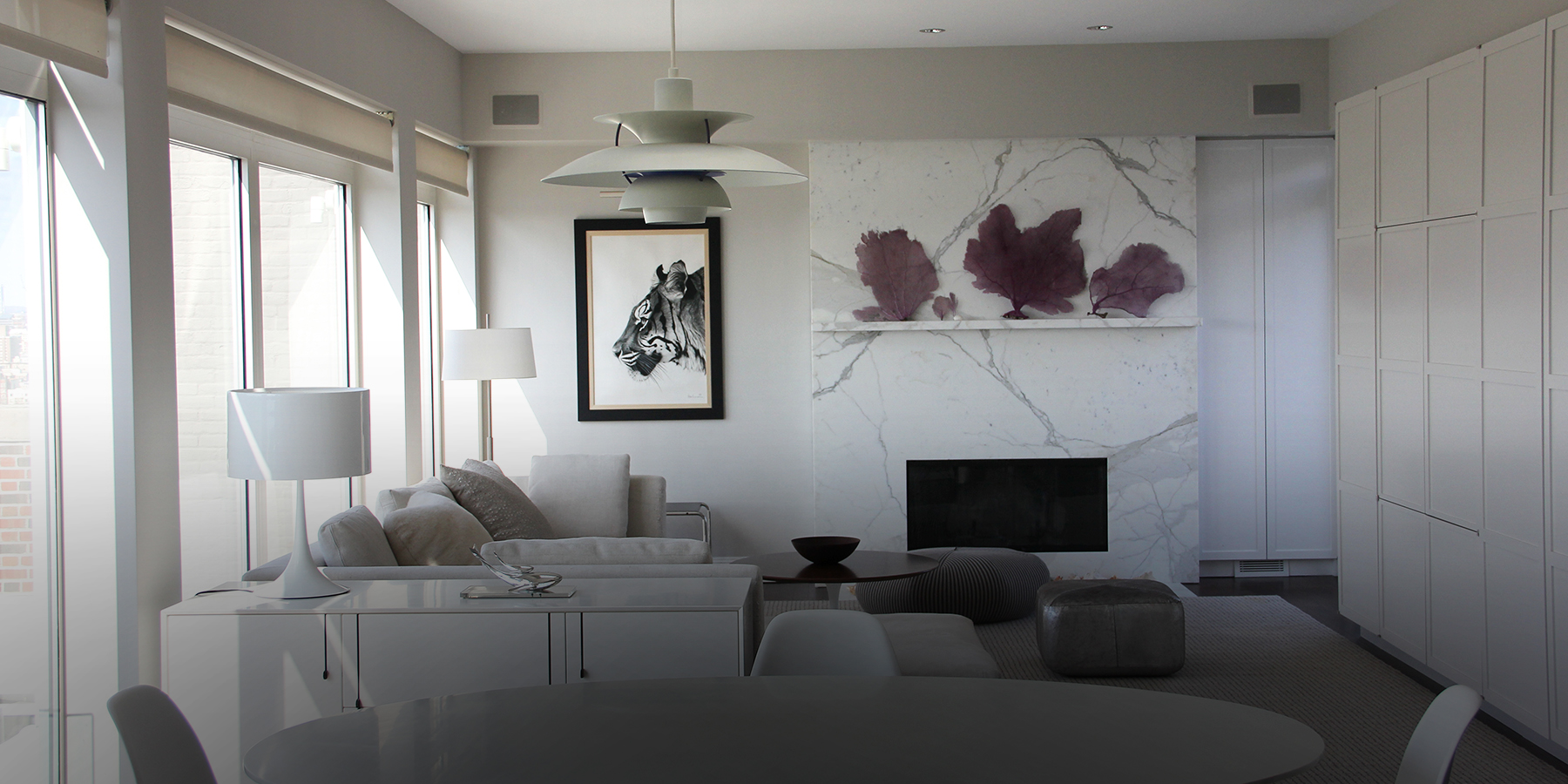 A former stylist for top interiors, food and lifestyle magazines, Suzanne Shaker is now an interior designer whose quietly sophisticated aesthetic has made her popular with many of the same aesthetic arbiters with whom she used to collaborate on photo shoots. 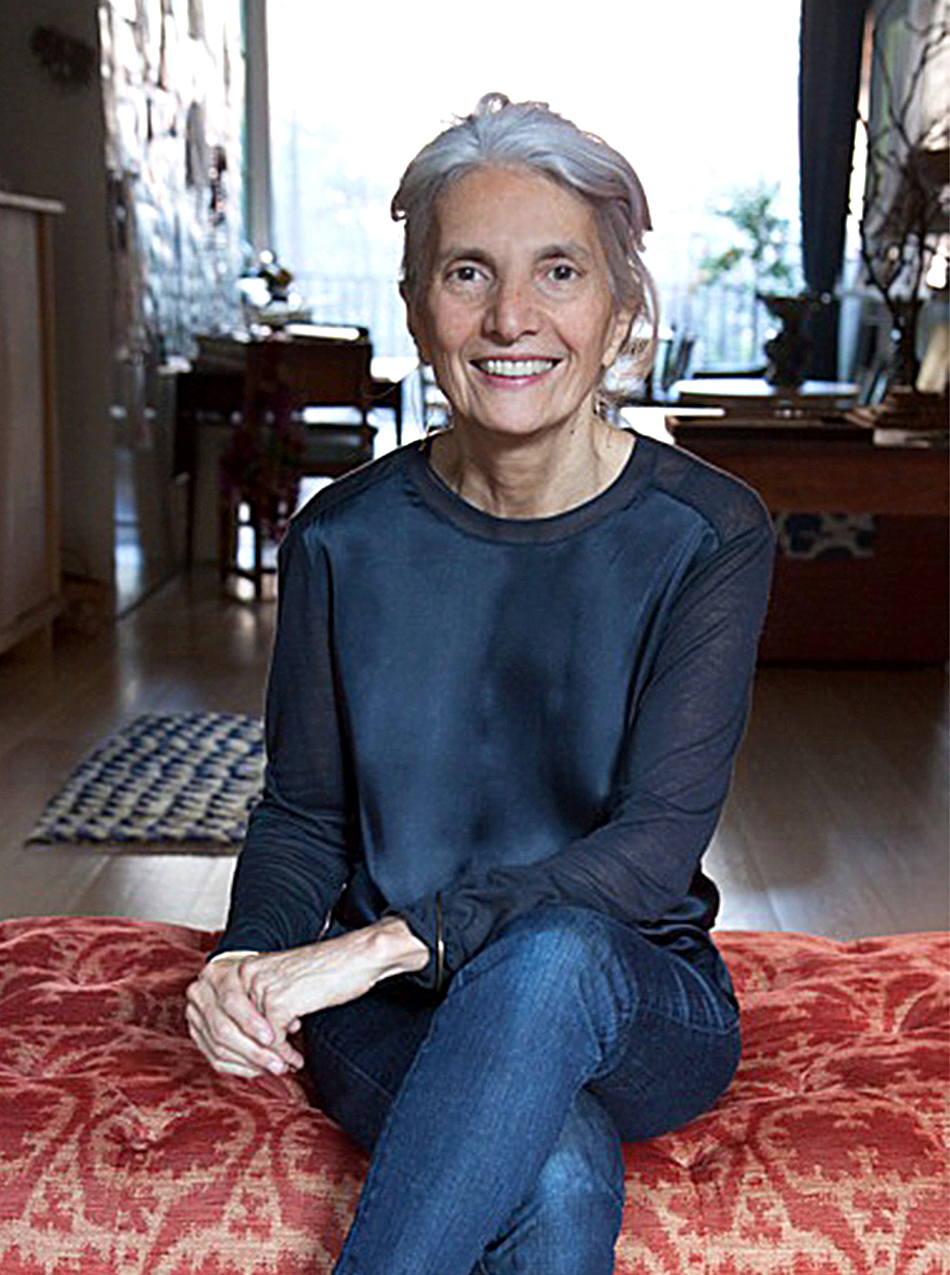 March 9, 2015In recent years, Suzanne Shaker has made the transition from being an in-demand stylist for top magazines to an equally busy interior designer (photo by Maria Robledo). Top: In a serene New York apartment on Fifth Avenue, Shaker hung a Louis Poulsen PH5 pendent above a B&B Italia sectional (photo by Suzanne Shaker).

Building your dream country house can be life-changing in a variety of ways: creating a haven from your daily urban madness, giving you a renewed connection to nature, depleting your savings to grad-school-days levels. But Suzanne Shaker’s experience designing her contemporary retreat on Shelter Island, New York, was so epic that it led her to ditch her career for an entirely new one.

Shaker was a highly sought-after interiors stylist for both editorial and advertising shoots when she and her husband, Pete Dandridge, a conservator at the Metropolitan Museum of Art, took the plunge and bought a one-acre piece of land on the small island off the coast of Long Island. Collaborating with noted architect Deborah Berke to build a two-bedroom home there — with 16-foot glass sliding doors bringing the woods inside — gave Shaker both the inspiration and the confidence to become an interior designer, taking on clients who wanted to apply her sharp eye and spot-on instincts to real life.

“I always said by the time I turned fifty I would stop styling,” Shaker tells me in the cozy, light-filled space she and her team occupy in architect and developer Cary Tamarkin’s Chelsea offices. (Shaker frequently partners with Tamarkin, best known for his Manhattan condominium buildings, but collaborates with other architects as well.) “What I wanted was work I could really sink my teeth into, instead of a different project every day.”

When it came to her own house, it wasn’t as if the sky was the limit. “We had all these dreams: I wanted antique French limestone floors throughout,” recalls Shaker, a striking woman with a head of lush silver hair. “Deborah would say, ‘You can’t have that.’ I wanted a house twice the size. Deborah would say, ‘You can’t have that.’ We pared down.” 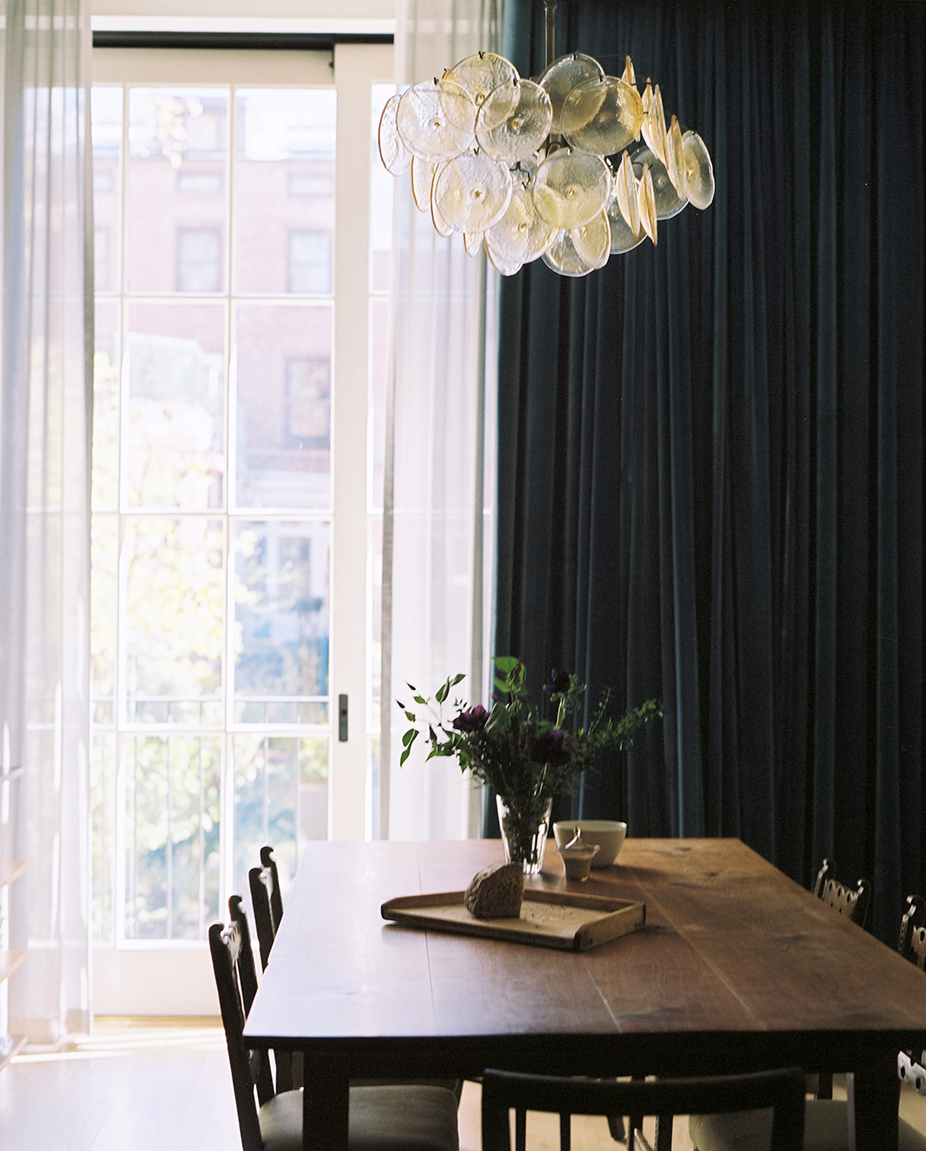 In the Brooklyn Heights townhouse of photographer Maria Robledo, a frequent collaborator from Shaker’s stylist days, a Murano glass light fixture hangs above a table by Robledo’s husband, artist Holton Rower. “The saying, ‘Never work with friends,’ does not apply,” Shaker says of working on Robledo’s home. Photo by Maria Robledo

They reduced the area to 1,200 square feet and went with oak floors, sheetrock and less expensive light fixtures to bring down the costs. “We had a really tight budget, and Deborah kept it to a T,” says Shaker, whose city residence is on the Upper West Side. “Yet, it’s a very beautiful house.

Her first major project as an interior designer for hire was the redo of a house in Berkeley, California. The clients, old friends, commissioned her to collaborate with architect Jerome Buttrick on a gut renovation of a mid-century house with expansive views of San Francisco Bay and the Golden Gate Bridge. Buttrick and Shaker replaced the home’s succession of small rooms with an open plan and ripped off the outer walls to make way for black-steel sliding glass doors opening onto a garden. Shaker filled the living room with a B&B Italia sectional sofa and added what she calls “soft luxury” with two large Carini Lang silk-and-wool carpets.

Shaker says the hardest part of her transition was leaving behind her many talented collaborators, from art directors to photographers. But the respect was obviously mutual: Several became clients. Photographer Maria Robledo, with whom she teamed on many a food shoot, for example, tapped her to work on her Brooklyn Heights home. “The saying, ‘Never work with friends,’ does not apply,” Shaker says.

In the decade or so since she made this career switch, she has built a portfolio of residential projects that share a clean-lined, minimal aesthetic. She gravitates toward unadorned furniture, like flourish-free upholstered headboards attached directly to the wall, neatly tight sofas and rectangular wood dining tables with unobtrusive, low-backed chairs. For Tamarkin’s own Shelter Island beach house — he’s a neighbor — she designed a platform bed made of plywood, covered in painter’s linen and sitting atop four blocks of wood cut from the house’s leftover beams. “It’s so pared back but refined at the same time,” she says. Inspired by a piece she created for a Banana Republic Home shoot, the Tamarkin bed led to ideas for other modular pieces, such as a sofas, all with a Japanese mood, a concept she is considering developing further. 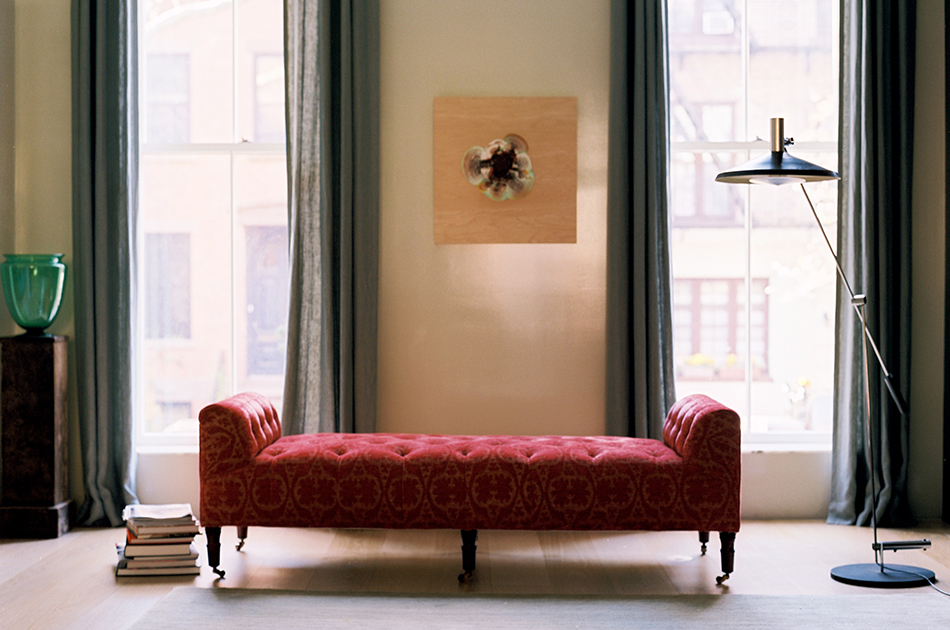 A bench from John Derian forms a fine centerpiece in Robledo’s Brooklyn Heights apartment. The small pour painting is by Holton Rower, and the drapes are Rogers & Goffigon. Photo by Maria Robledo 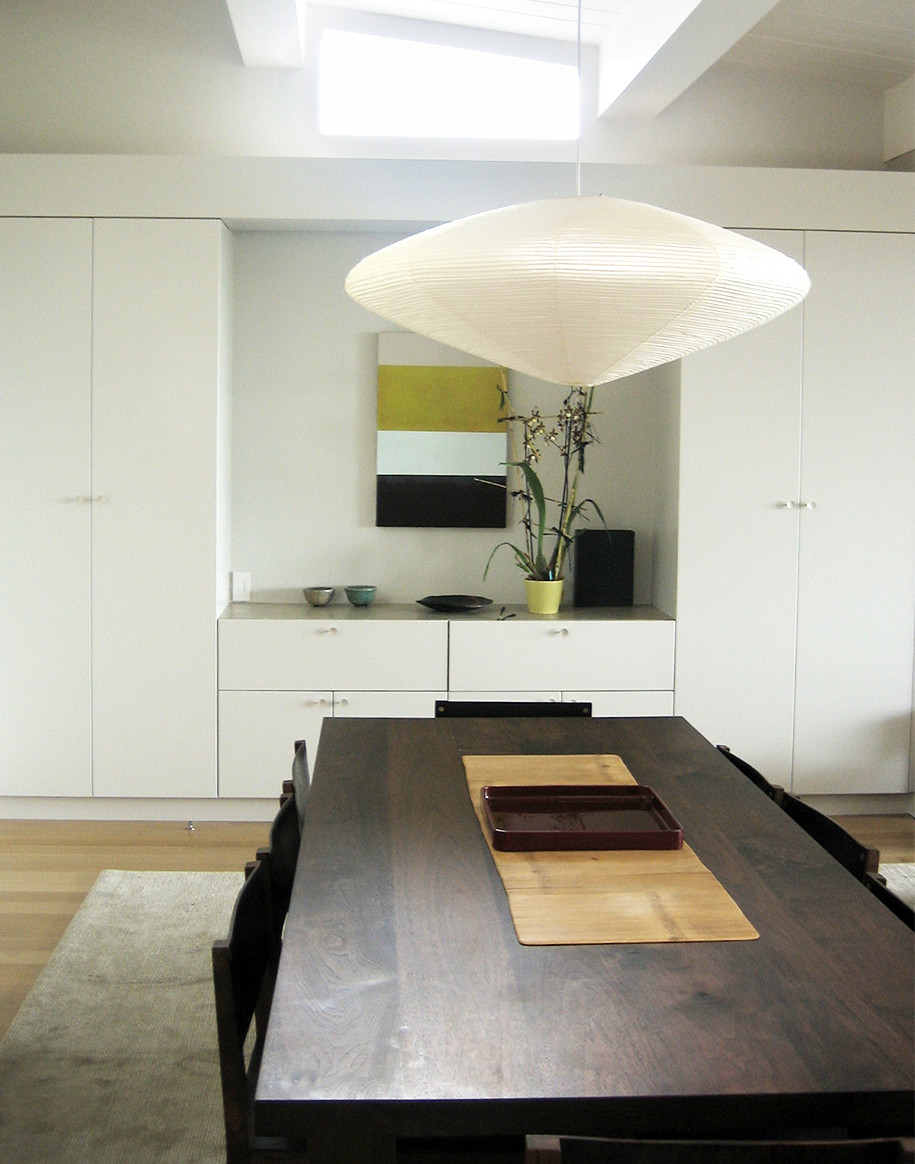 Shaker’s first major project was a house in Berkeley, California, where she placed a Noguchi light fixture above a walnut table, chairs and bench by BDDW. A painting by Sarah Hinckley echos the room’s palette. Photo by Suzanne Shaker

Though her palettes are generally calm and muted, Shaker can bust out the color when needed. Robledo was open to a mustard-yellow sofa in her living room. For two young brothers in Brooklyn’s Boerum Hill, Shaker designed built-in bunk beds that double as a playhouse, incorporating cheerful shades of yellow, green, blue and red to compensate for the room’s lack of natural light.

Shaker has a few favorite details, including handmade pieces and bulbous Noguchi lamps, but she does not have an obvious imprint. “Most interiors right now seem so much about consumption or labeling,” she says. “I’m much more about quieter, simpler. I tend to want to quiet the environment.”

Shaker traces at least part of her respect for finely crafted objects to her childhood, which she spent in Connecticut, in a household comprising five generations, from her great-grandmother on down to her nephew. “My great-grandmother sewed her own clothes, baked every weekend,” she recalls. “So there was always that relationship to the handmade and to beautiful things.” The house even had an old-fashioned wringer washing machine and a cast-iron stove.

Shaker came to New York to study photography at the School of Visual Arts and the International Center of Photography. But she realized that, while interested in photographs, she didn’t see herself becoming a photographer. “Trying to find where I fit in,” she says, she took a job with Paula Greif, then creative director for a Barneys ad campaign and director of influential music videos for Duran Duran and Steve Winwood in the 1980s, as well as Nike’s “Revolution” commercial, set to the Beatles tune. Originally brought on as Greif’s assistant, Shaker ended up as a stylist when Greif and her producing partner, Peter Kagan, preferred Shaker’s finds to those of the paid set designers and stylists. 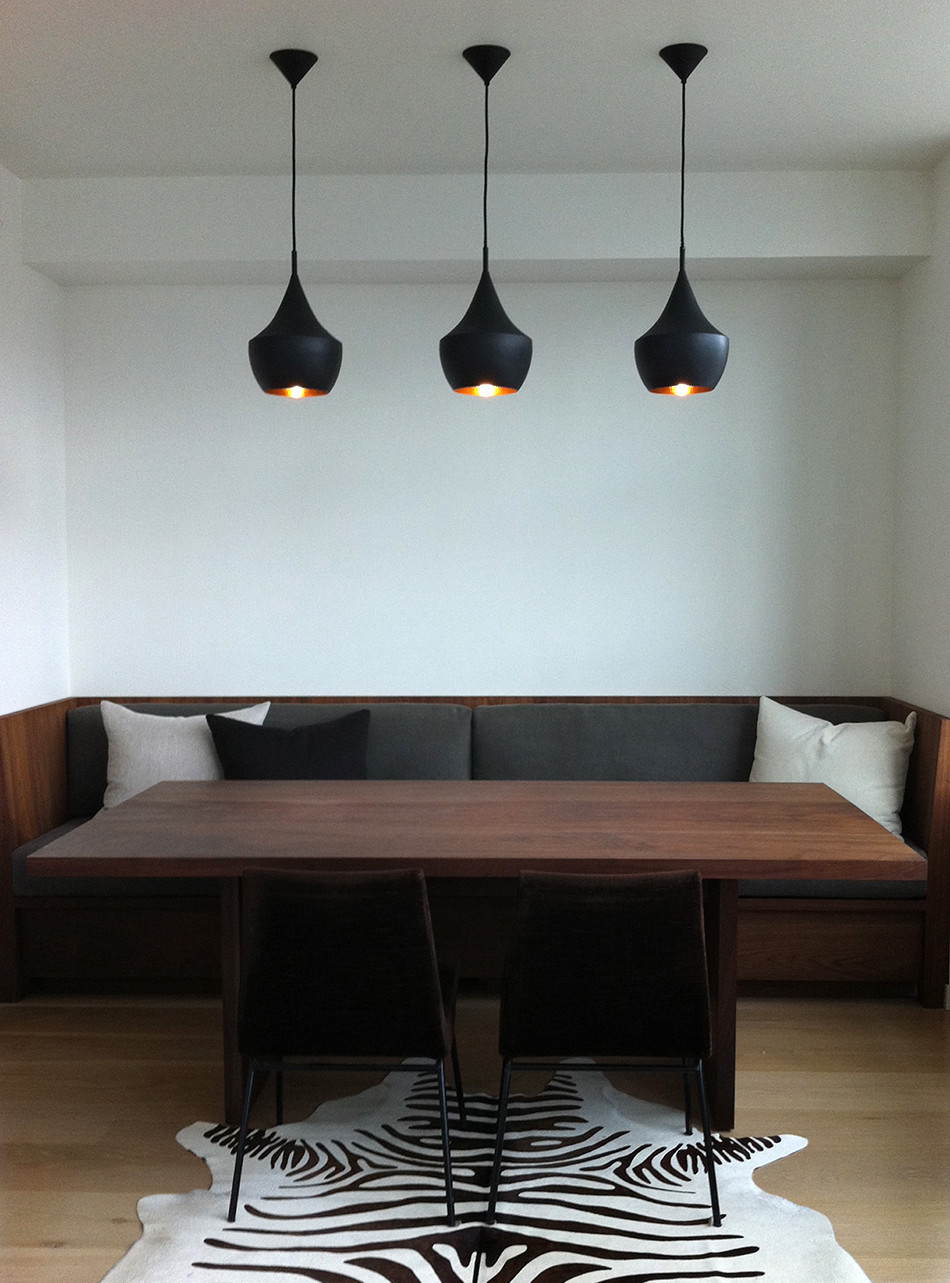 In the Chelsea apartment, Tom Dixon pendents hang above a walnut table and built-in banquette by Brooklyn’s desciencelab. The custom cushions are by Dmitriy & Co. Architecture by Tamarkin Co., photo by Suzanne Shaker

Her first real assignment was an Annie Leibovitz American Express ad starring Mikhail Baryshnikov. The concept: Baryshnikov would stand atop a horse on Wall Street in the early morning. Among Shaker’s responsibilities was casting the horse. Faced with the challenge of finding an animal that was photogenic and that wouldn’t be spooked by a stranger standing on his back, Shaker called the Big Apple Circus.

After a few years of video and commercial work, Shaker was drawn back to still photography. She began by styling food-centric still lifes for Martha Stewart Living in its heyday. “That time of Martha was really like no other,” she says. “We had all this freedom to create. She really created this industry.” Gradually she segued into interiors styling, again building a resume studded with top magazines and photographers.

While both styling and interior design tap into her chic sophistication, her decorating business requires reality-based solutions. There are no shortcuts, trick photography or, obviously, photoshopping sessions when it comes to designing a house. “On set, with styling, even if it’s in a real home, you work it to the camera — you get the big arm of the chair out of the way,” Shaker explains. “When you’re building a house, you have to think of that beforehand.”

It’s that part of the puzzle — how clients will actually live — that Shaker finds most rewarding. Speaking from personal experience, she says, “Home is such an important part of your life.”