Inside the Gritti Palace’s Dazzling Renovation in Venice 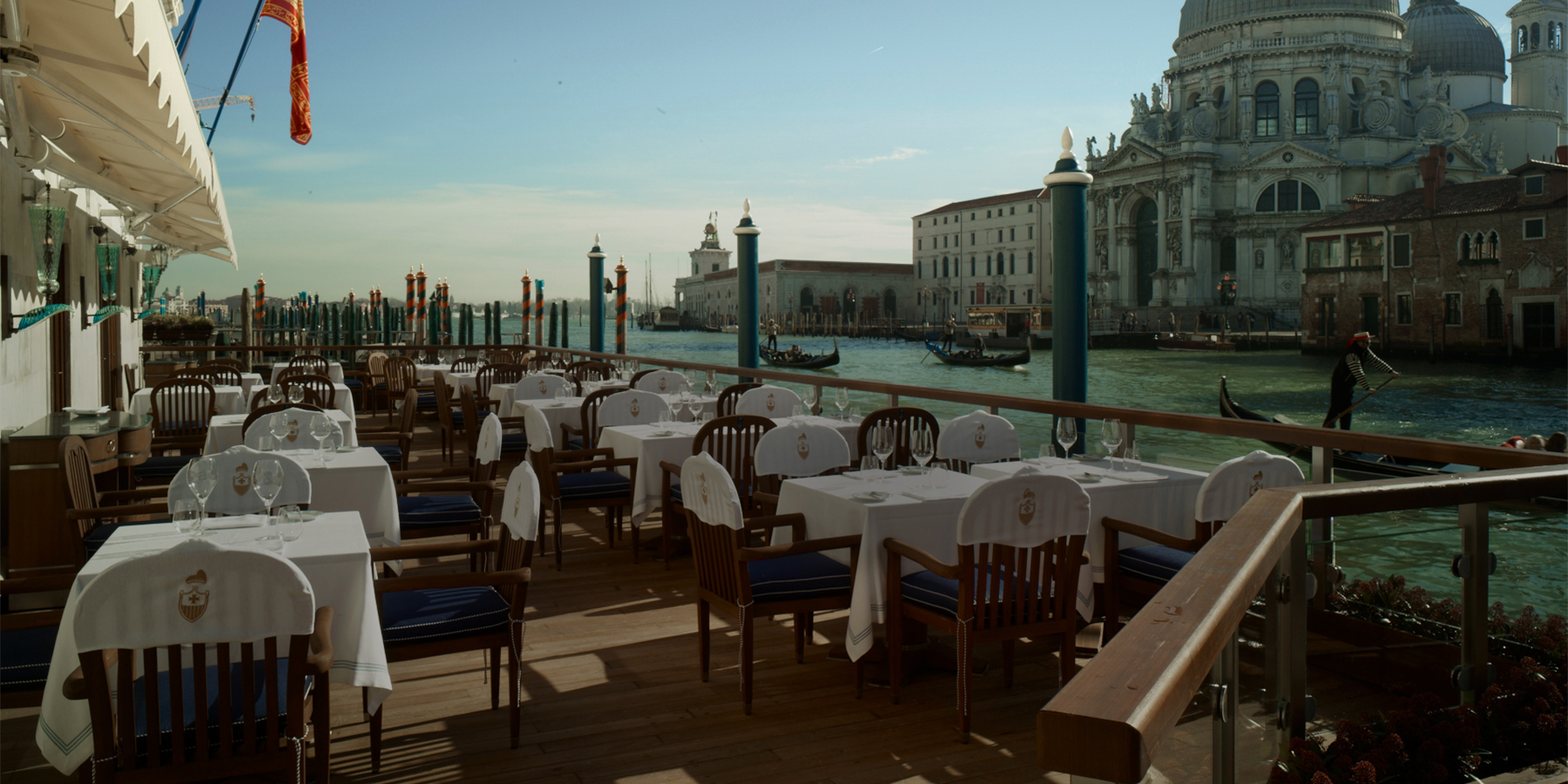 The storied Italian hotel got a dreamy redo that pays homage to its past even as it brings the 500-plus-year-old palazzo into the 21st century. 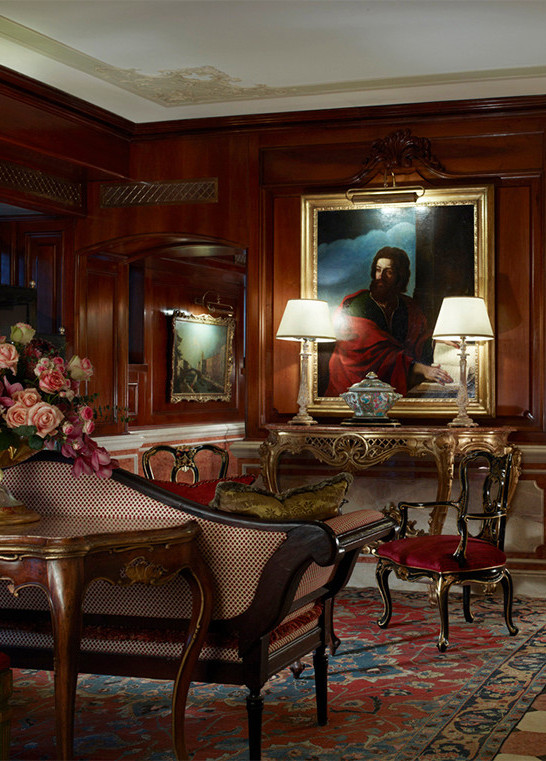 May 8, 2013Donghia creative director Chuck Chewning’s recent 15-month renovation and restoration of the Gritti Palace, in Venice, began with a cataloguing of the hotel’s extensive collection of art and antiques, including those in the reception area seen here. Top: The hotel’s terrace overlooks the Grand Canal and Santa Maria delle Salute church All photos by Fritz von der Schulenberg

Built in 1475 along the Grand Canal, a stone’s throw from Piazza San Marco, Venice’s Gritti Palace has been a hallowed haven for centuries. It functioned first as a home for the aristocratic Pisani and Gritti families, the latter acquiring it in 1522. But since 1948 it has served as a luxury hotel, offering sumptuous shelter to notable travelers from every cultural swath. Richard Burton and Elizabeth Taylor enjoyed its cossetting confines in their heyday, as did Ernest Hemingway and even Winston Churchill, who stayed during the 1948 Venice Film Festival. More recently Brad Pitt and Angelina Jolie have come along with their young brood, signing the hotel’s famed Gold Book.

By the time Sheraton — which was acquired by Starwood in 1998 — purchased the Gritti from the Aga Kahn in the mid-1990s, it was more than just an iconic destination: It had become a precious — and perishable — archive of antiques and art, all in dire need of preserving, and not just for nostalgia’s sake but to ensure the future of this extraordinary collection.

“The Gritti has always been a house of respect,” says its former concierge of 40 years, Giovanni Terrocin. But it has also been a symbol of survival, not just for outlasting the flashy boutique-hotel trend but for enduring a far more tempestuous competitor, mother nature. Due to the hotel’s precarious foundation, having initially been built, like the rest of Venice, on wood piles embedded in a sandy lagoon, its ground floor had been continually flooded — more than 30 times in 2011 alone — sometimes with as much as two feet of water.

Starwood soon determined that the building required a complete restoration and renovation to preserve both its shell and its contents. But the question remained: Who could take on such a serious, sensitive and extensive job? Clearly, it would take a special person, someone to not only master the vast and intricate logistics involved (nothing could be done, for example, without the approval of Venice’s Fine Arts committee) but who would embrace it with equal parts respect and creativity. 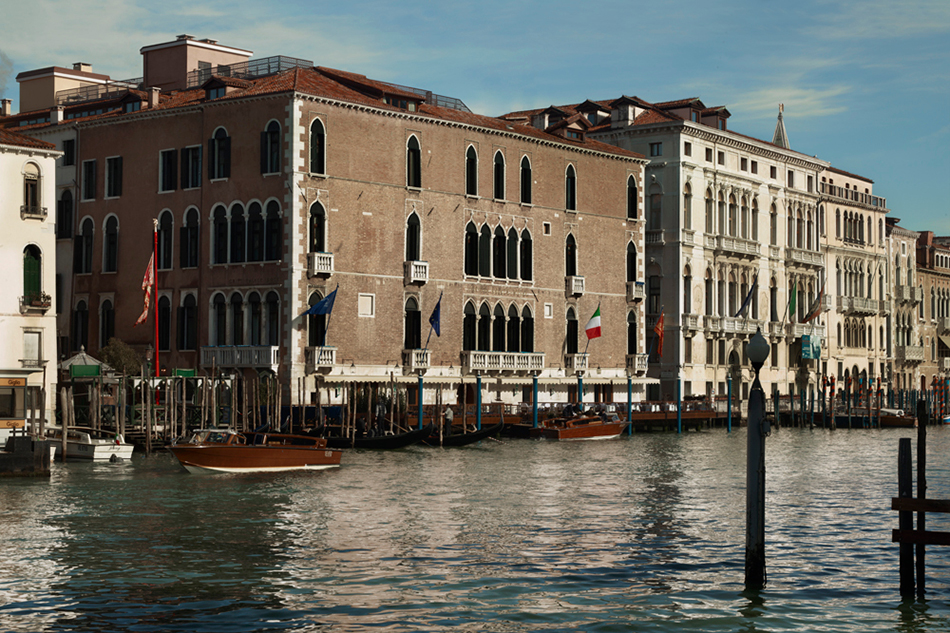 A hotel since 1948, the Gritti began its life in 1475 as an aristocratic family pile. 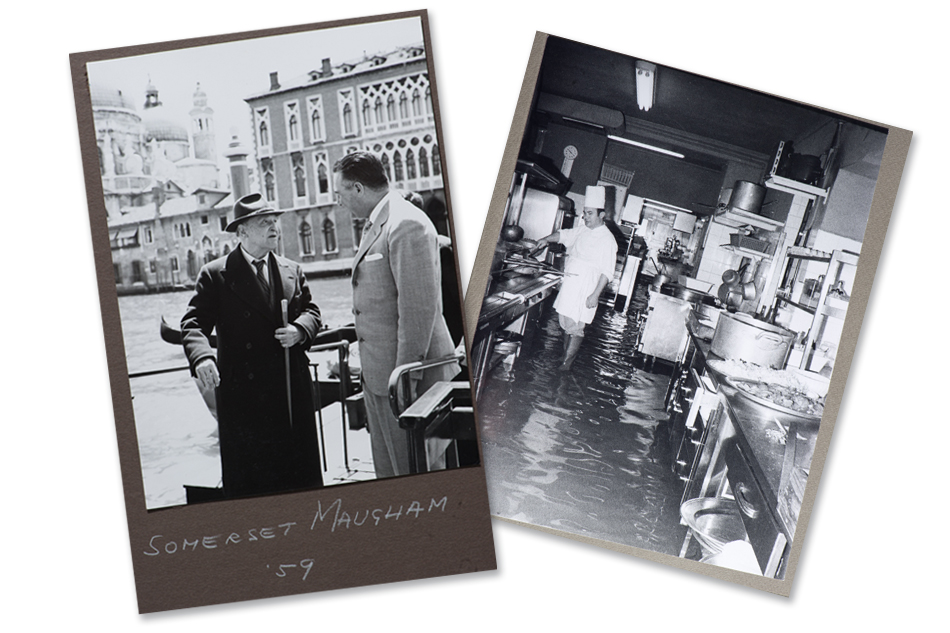 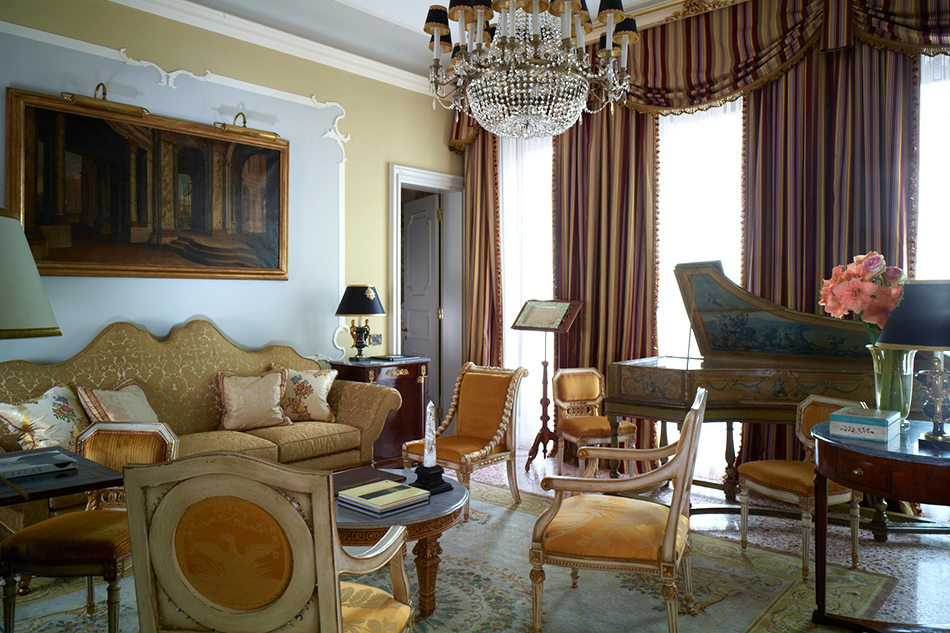 The Gritti’s La Fenice Suite takes its name — and musical theme — from Venice’s famed opera house, which reopened a few years ago after a fire nearly destroyed it. 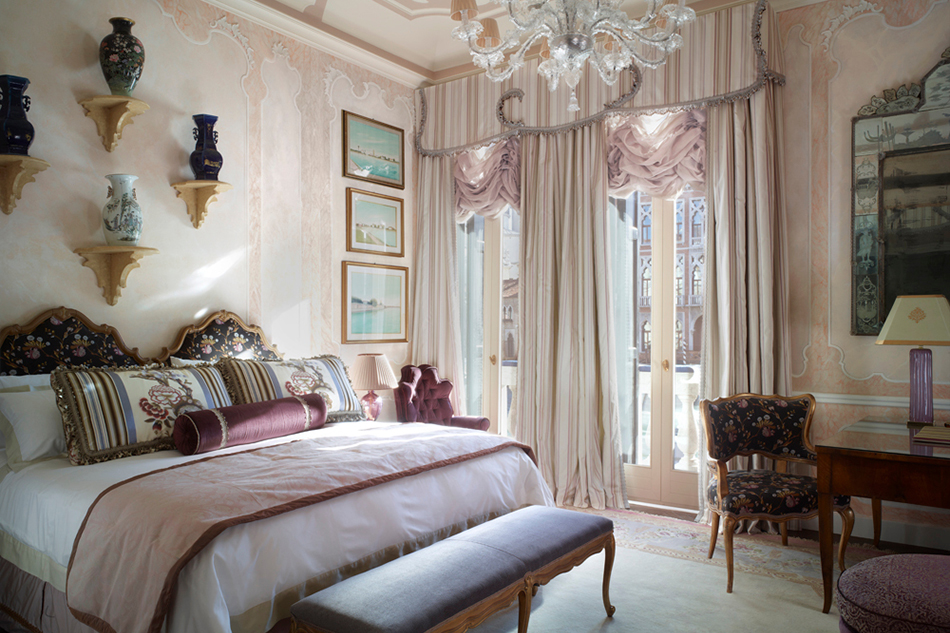 Awash in shades of pale pink and light lavender, the Somerset Maugham Suite contains a collection of notable works by the English playwright and novelist. 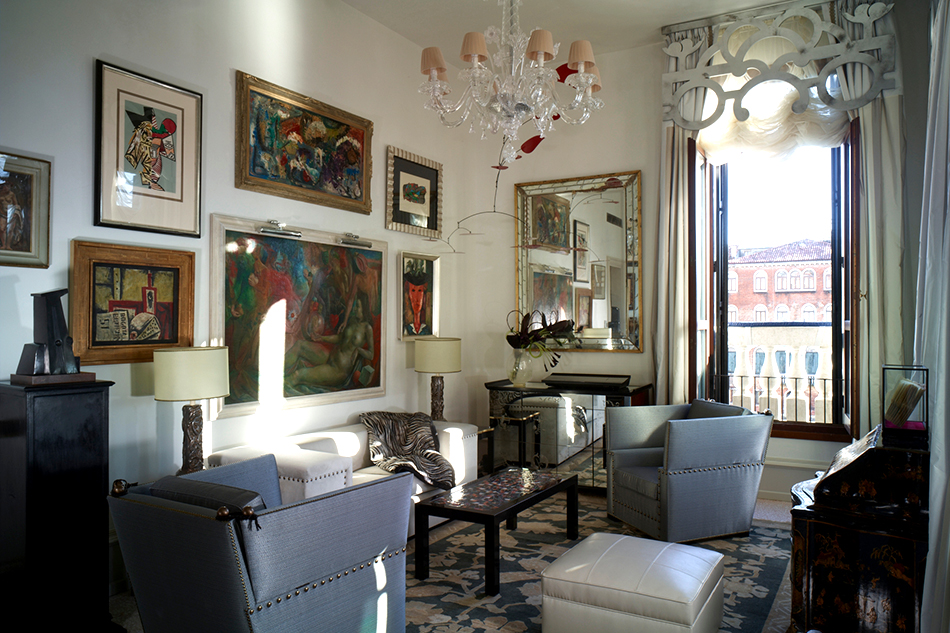 For this suite, Chewning took inspiration from another Venice icon: collector and modern maven Peggy Guggenheim, whose own palazzo (now a branch of the Guggenheim Museum) sits just across the Grand Canal from the hotel. 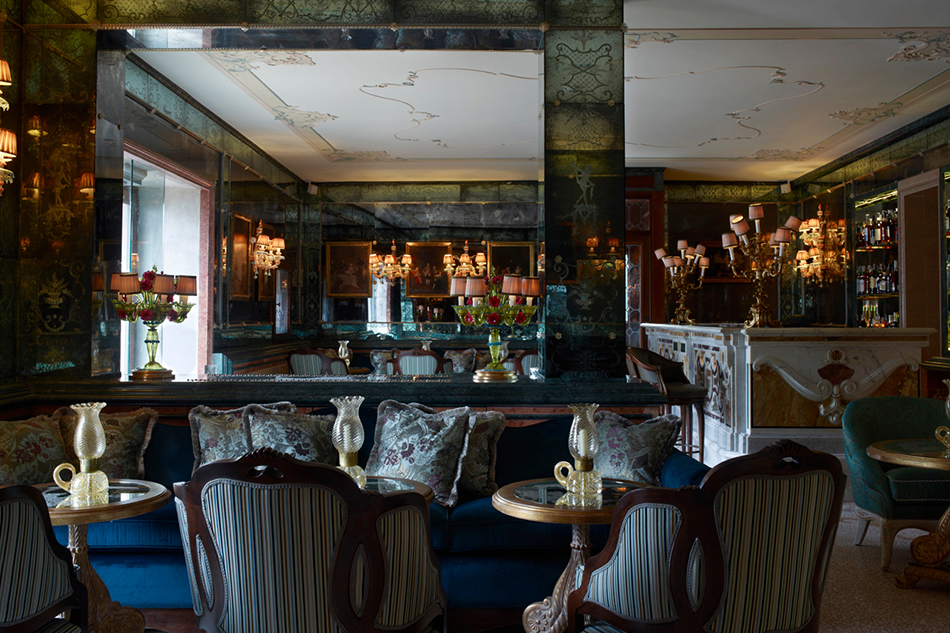 In the back of the hotel’s Bar Longhi, overlooking the Grand Canal, three paintings by the 18th-century Venetian master Pietro Longhi — each valued at more than $1 million — hang nonchalantly on the antique-mirrored, seafoam-colored wall. 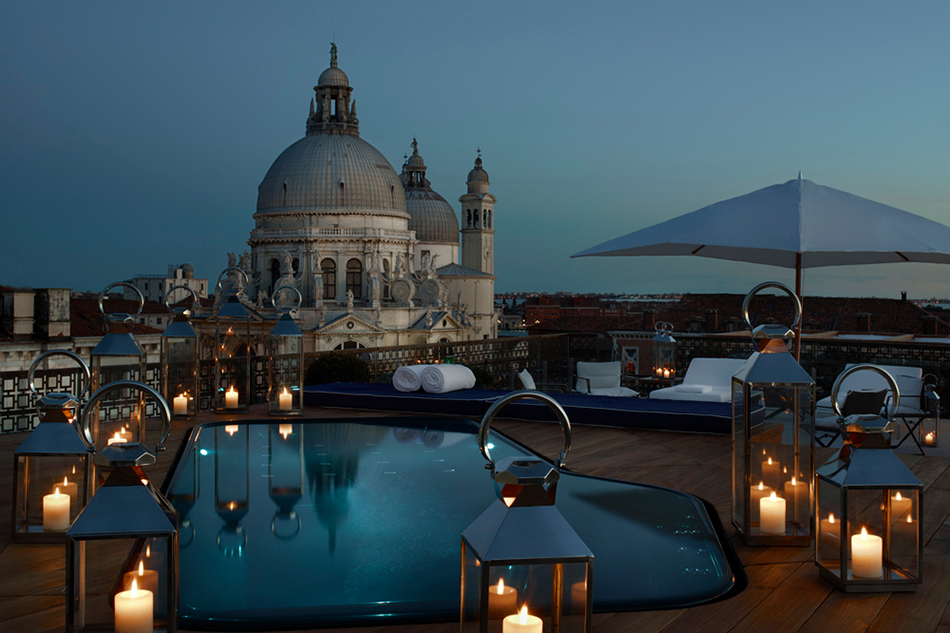 With 360-degree views over all of Venice — and an especially prime vantage of the city’s basilica of Santa Maria della Salute — the newly created two-story Redentore Terrazza Suite boasts a 2,700-square-foot private terrace. 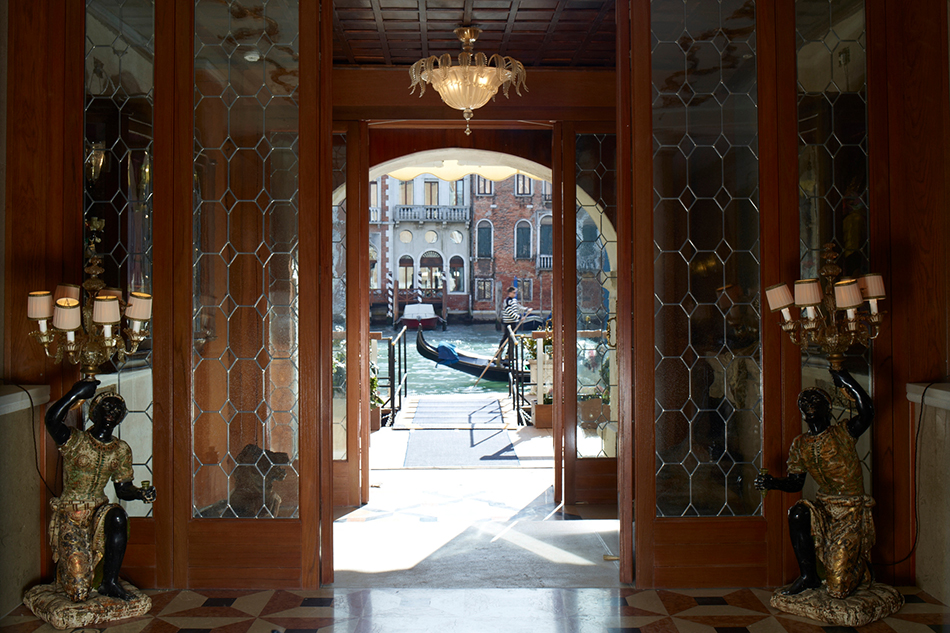 Of the two ways to enter the hotel — one by land, the other by water — it’s the Grand Canal–side dock and terrace that proves the most welcoming, not to mention romantic. 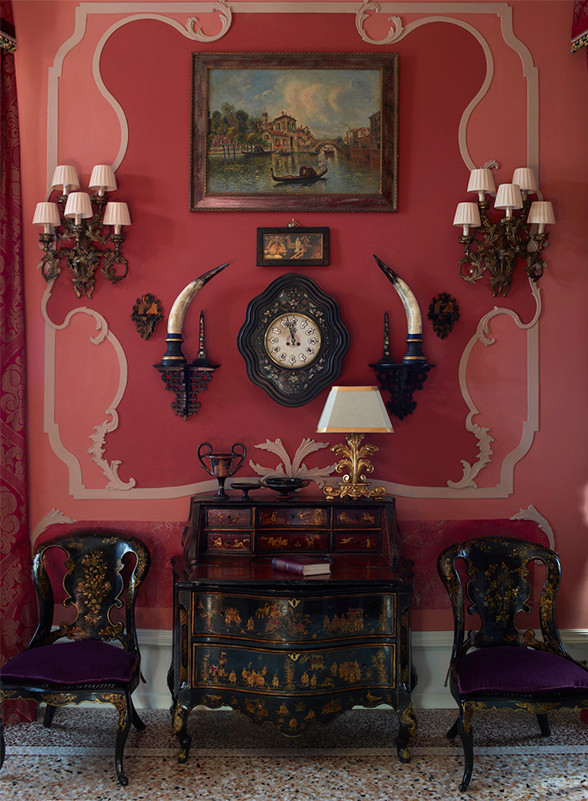 The Ruskin Suite, an homage to Victorian-era aesthete and author John Ruskin (The Stones of Venice), contains some of the Gritti’s oldest antiques, dating to the building’s days as a private palazzo.

Enter Chuck Chewning, creative director of Donghia, the celebrated New York interior design and home furnishings firm. Chewning had worked on prior renovations of Starwood’s Luxury Collection hotels in Athens and Vienna over the past decade, but he seemed especially fated to take on the Gritti: Since 2005, Donghia has been owned by Rubelli, the centuries-old Venetian textile house, which had first provided the handmade silk damask guest room wall coverings in the 1940s.

“I think of the Gritti as a grand, invaluable home more than a hotel, and so I treated this project as such,” says Chewning, who maintained his role as Donghia’s leader during the renovation, even while traveling monthly between New York and Venice to meet with the Gritti’s design team. “Starwood wanted to preserve the iconic legacy but also bring it into the 21st century.” After a thorough documentation of the hotel’s existing inventory (from the dozens of Fortuny curtains that were repurposed as pillows and throws in the renovated suites, to the three paintings in the Gritti’s famed Bar Longhi by the 18th-century Venetian master Pietro Longhi, each valued at more than one million euros), the first order of business was to protect the hotel from future aquatic disasters. Since the team was not allowed to touch the hotel’s original walls, a vasca, or tank, was inserted under the entire building.

Next on the list: making sure the rooms reminded guests of the hotel’s glorious past, while still providing luxuries available today. The room count was reduced from 91 to 82, to create more cossetting bathrooms (six different kinds of marbles were used throughout) and to make the sizes of the rooms more generous. And ten signature suites, available at nightly rates of $8,000 to $15,000, now offer an intimate way to pay homage to some of the Gritti’s most illustrious and loyal clientele: The Ernest Hemingway suite, for example, where the author stayed and wrote in the 1940s, had its 18th-century decor freshened, while the Peggy Guggenheim suite was created — along with eight others — from scratch during the renovation. One of its most devoted patrons, Guggenheim held her 80th birthday at the hotel in 1978, and her suite takes its design cues from her own palazzo across the Grand Canal, which is now a branch of the Guggenheim Museum. The suite comes complete with framed vintage Hermès scarves depicting Venice scenes and, most impressively, signed lithographs of some of the artists she collected, Picasso and Miró included. 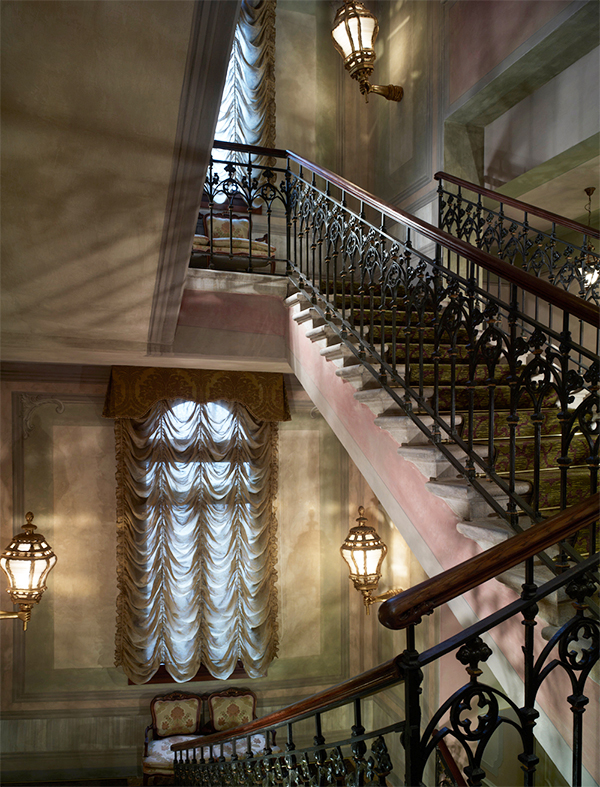 When it came to choosing new textiles for the hotel, Chewning never attempted a direct translation from past to present but rather strove for a romantic reinterpretation, casting a reverential eye through a fresh lens of creativity. Whether recovering furniture or the hotel’s expanses of upholstered walls, the design team referenced patterns from more than 7,000 antique documents in Rubelli’s extensive archive (housed in the company’s own 15th-century pile, the Palazzo Corner Spinelli), choosing a Doge’s red damask for the walls of the Gritti’s Explorer’s Library, say, or a 1930s Giò Ponti cut velvet for the sofas in the suites.

When adding a contemporary element, Chewning took care to make it look like a seamless part of the hotel’s past: Three local Venetian artists created hand-marbleized frescoes in salmon pink and pale green on the walls of the Grand Staircase, while the (entirely new) terrazzo floors of the public areas were inspired by historic Venetian patterns.

The entire painstaking process cost more than $55 million and took 15 months, with the hotel remaining entirely closed from the fall of 2011 until this winter. “We never wanted to change the legacy of the Gritti Palace,” says Chewning when asked to sum up the project. “Not only do we want old clients to feel as welcome as ever when they return, but we hope new visitors will feel equally at home. Regardless, we want to dazzle.”