A New Generation of Parisian Designers Is Redefining French Chic 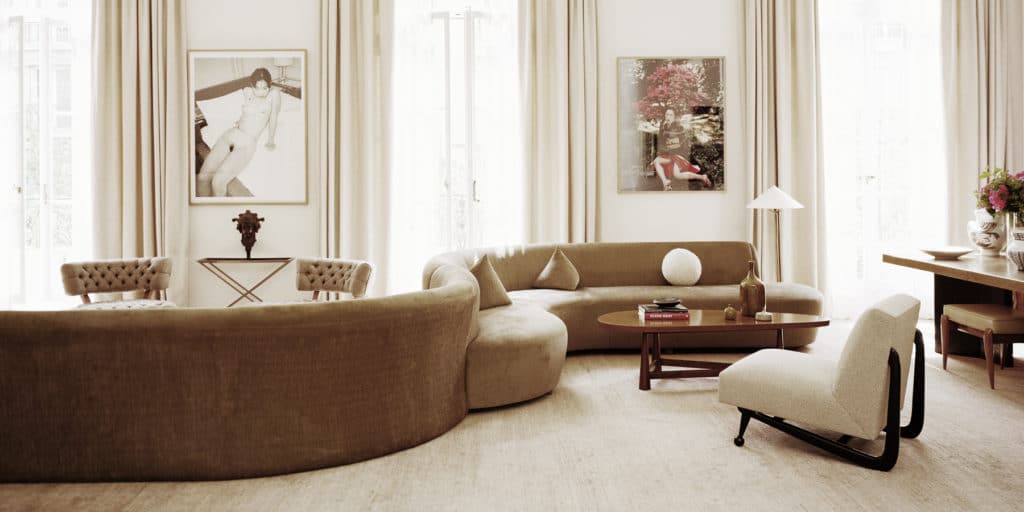 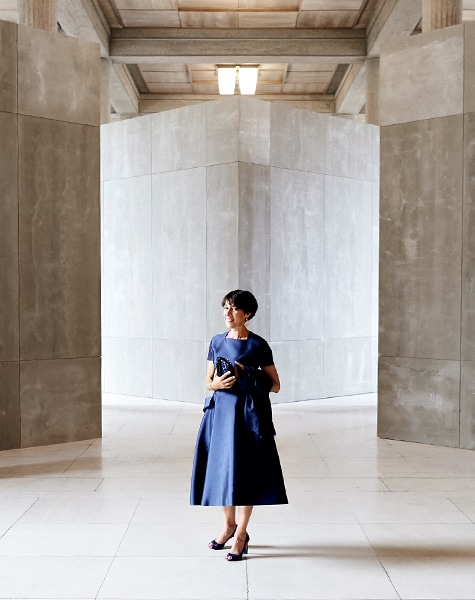 June 19, 2016Marie Kalt, editor in chief of AD France, and her team launched a creative studio that consults for luxury brands and creates books like The New Chic (portrait by Gonzalo Machado). Top: In this Paris living room, Pierre Yovanovitch placed a curving sofa of his own design, which he paired with an Edward Wormley coffee table and tufted chairs by Billy Haines. Photos by Nobuyoshi Araki hang between the windows (photo by Vincent Leroux).

Marie Kalt, editor in chief of AD France, has been steeped in design since birth. Her father is an architect, as are her husband and one of her brothers. Her childhood home was decorated with Danish furniture and an original Serge Mouille lamp, and she has spent her whole career working for interiors magazines — Maison Française, Elle Décoration and Marie Claire Maison. In 2008, she took the reins at AD, where, in addition to overseeing the magazine, she organizes a pair of highly acclaimed annual events in Paris: a decorator show house dubbed AD Intérieurs and an exhibition of contemporary furniture creations called AD Collections. Here, she discusses her latest project, a hot-off-the-press book titled The New Chic: French Style from Today’s Leading Interior Designers (Rizzoli), which features the work of a dozen of Paris’s most sought-after tastemakers, such as Joseph Dirand, Jean-Louis Deniot and India Mahdavi.

How would you describe AD France compared with the other international editions of the magazine?

I think we’re one of the few editions with a cultural approach, in the sense that we devote lots of pages to portraits, architecture and the art market. One of our major focal points has always been the promotion of the crafts. We also try to place particular emphasis on the imagery. When we show a house, we’re more concerned with evoking its atmosphere and spirit rather than being purely descriptive, where you show the same room from different angles and the flow of the apartment. Our aim is to provide images that inspire people and make them dream.

A chandelier by Oswald Haerdtl hangs over the living room of this Corsica vacation home designed by Jean-Louis Deniot. The space includes a Vladimir Kagan sofa, coffee tables and a rug by Deniot and a Pierre Paulin armchair and ottoman. Photo by Julien Oppenheim

Why did you decide to produce a book?

It’s part of a policy that also led to the creation of AD Intérieurs and AD Collections. In today’s world, a magazine can no longer exist simply in its paper form for a whole number of reasons linked to the evolution of the advertising market and distribution. We understood quite quickly that we needed to develop other parallel activities and that our future didn’t lie in a digital version of the magazine. The Internet sites of shelter titles don’t generate anywhere near as much advertising revenue as those of fashion magazines. So, we embarked upon other ventures, among which is the creation of a creative studio that accepts a diverse range of commissions. We recently created a brochure about the architecture of the Conseil économique, social et environnemental building in Paris, designed by Auguste Perret. We also consult for luxury brands and hotel groups. This book is just another aspect of the studio’s work.

How did you choose the designers included in the book?

When I arrived at AD France, I looked around at who would take over from the great French decorators, and a number of names emerged. There were people like Chahan Minassian and Pierre Yovanovitch, who had already attained a certain maturity and whom we pinpointed as potential stars. We followed them and others through publishing their work in the magazine, and they all also participated in editions of AD Intérieurs. That created a sort of family, which corresponded to a new generation. They are all between the ages of 40 and around 55. As we own all the imagery in the book, another criterion was that we had to already have photographed sufficient projects. There are certain firms, such as Studio KO, which I would have also liked to include, but we didn’t have enough photographic material. 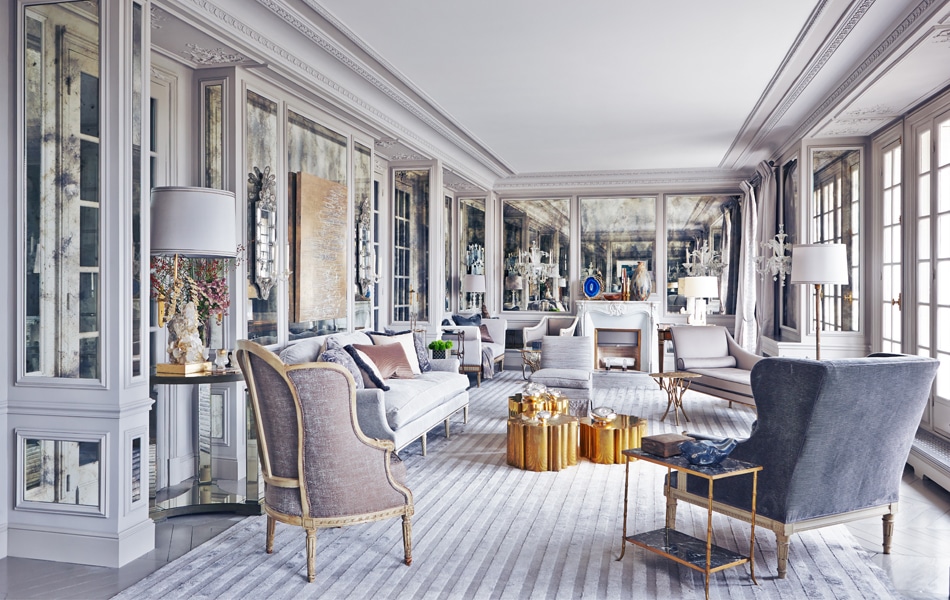 Chahan Minassian designed this 19th-century Paris living room, which features mirrored wall panels and a gilded painting by Nancy Lorenz. The room contains 18th- and 19th- century armchairs, a daybed by Minassian and a trio of coffee tables by Kam Tin. Photo by Gonzalo Machado 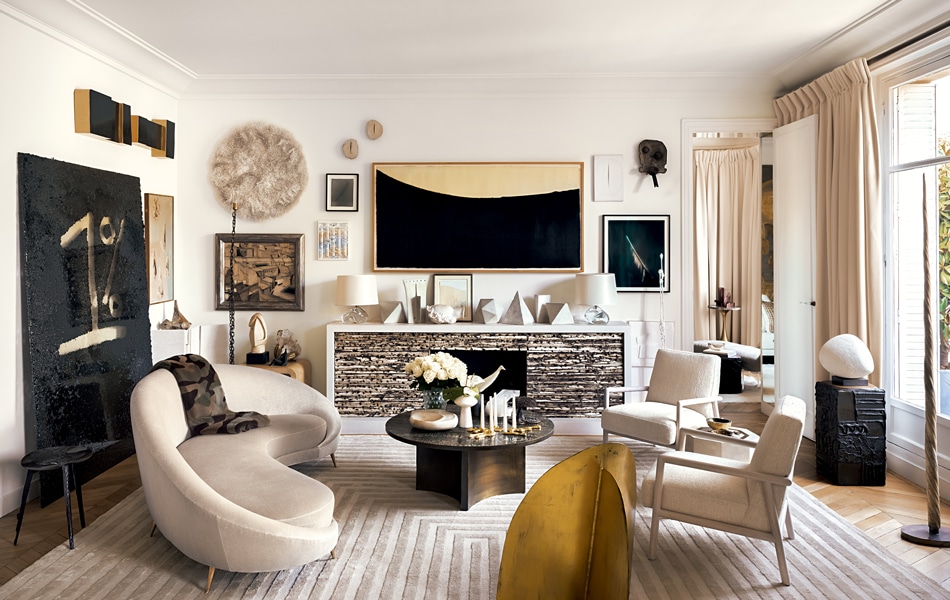 In Minassian’s Paris apartment, a Richard Serra painting hangs above the fireplace, whose mantel is topped with ceramics by Peter Lane. The sofa is by Federico Munari, the Eternal Forest coffee table is by Philip and Kelvin LaVerne, and the armchairs are by T.H. Robsjohn-Gibbings. Aaron Young’s 1% resin artwork leans against the wall behind the sofa. Photo by Jérôme Galland 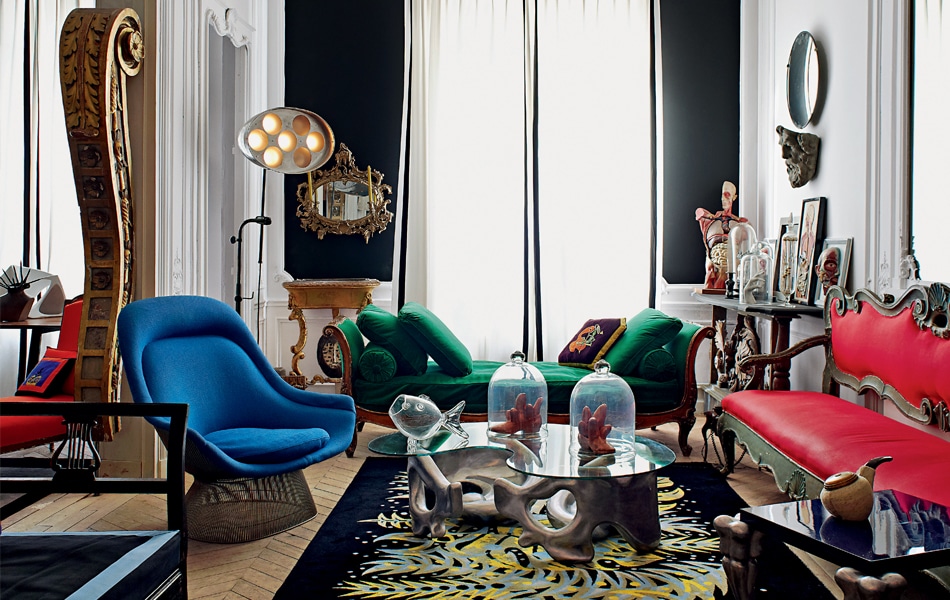 Vincent Darré’s Paris living room is punctuated with colorful pieces like a Warren Platner lounge chair and a Bassin coffee table of his design. Photo by Jason Schmidt 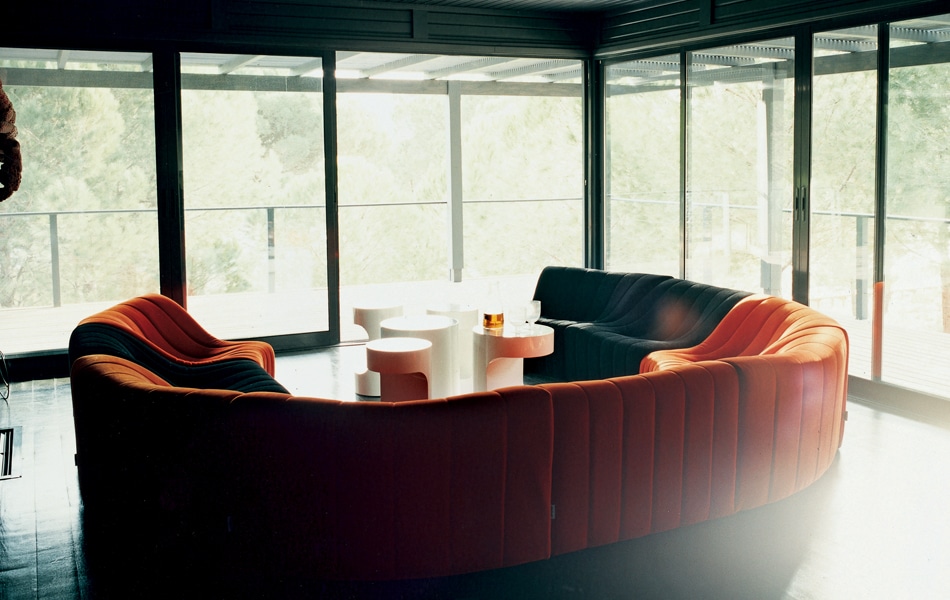 The living room of a Thierry Lemaire–designed seaside home in Comporta, Portugal, features a Chromatique sofa by Steiner and coffee tables of Lemaire’s own design. Photo by Julien Oppenheim 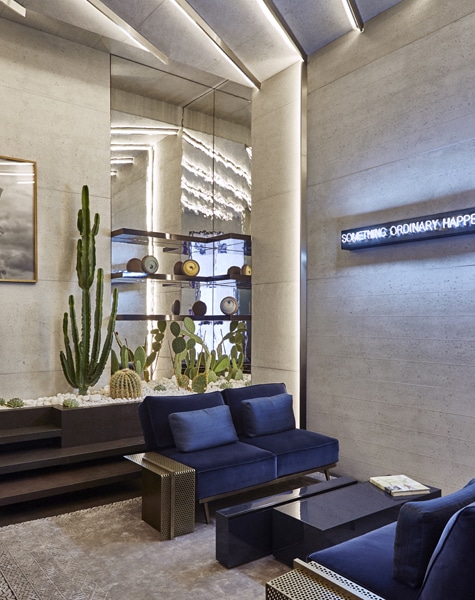 A neon work by Daniel Firman hangs on the concrete wall in this living room that Isabelle Stanislas designed for AD Intérieurs 2015. The space also features a cactus garden and mirrored panels. Photo by Gonzalo Machado

How would you describe the “new chic”?

“Le goût français” or “French style,” is difficult to define. However, it’s very clearly steeped in classical references, because there is not one designer in the book who is not nurtured by the aesthetic of the 18th century. It’s also less rigid than American interiors. Instead, there’s a sort of nonchalance, a certain lightness and that je ne sais quoi called chic. One common thread in the work of all the designers in the book is the presence of both contemporary art and vintage furniture from the 1950s, ’60s and ’70s. From there, each has his or her own preferred field. For example, Charles Zana is a fan of Italian mid-century, whereas Pierre Yovanovitch is more into Scandinavian design. What they all share, too, is a love of mixing things of different provenances.

The first designer profiled in the book is Joseph Dirand, who is described as “the very embodiment of the new French style.” In what way?

In his work, there’s both this mix of very classical references to the 18th century and 1930s and also something irreverent that breaks with established codes. Plus, for us, he’s one of those who will have the most spectacular career. Compared with others in his generation, he’s a trained architect, which opens up many more possibilities. At the moment, he’s working on both a skyscraper in New York and the scheme for an island in the Bahamas, where he’s deciding everything from where the marina should go to the design of the door handles. At 42, he’s also the youngest of the designers in the book, along with Jean-Louis Deniot. So, he’s really in tune with the new generation of clients from the Internet economy. 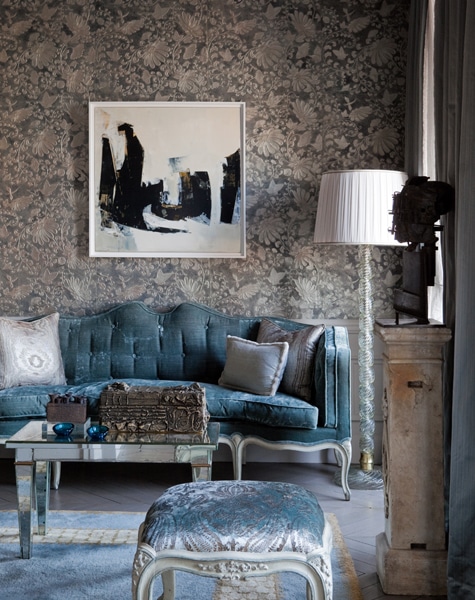 What sets this generation of designers apart from those that came before?

I think that one important element is that they have a lot less of a historical approach. If you compare them with the likes of Jacques Garcia, Jacques Grange or Frédéric Méchiche when they emerged, the references to the past are a lot less obvious. The designers featured in the book have also come into contact more with collectors of contemporary art, and that’s been an essential element of their interiors right from the start.

How do you explain the success of this group of French designers?

I think it was a movement we helped to initiate but that was followed by others. In the 1990s, very few people were interested in decorators. Design was the thing. It was the heyday of Philippe Starck, and back then magazines in France were more into a sort of anti-decoration. The idea was that you could be your own decorator and that you didn’t need to hire a professional. But that changed around the time of the launch of AD France, in 2000. It was then that a certain number of people started to take an interest in the profession again. Another essential element is the savoir faire of French craftsmen. Without them, the designers would not be able to create the interiors they do. We still have bronze founders, gilders, embroiderers, plaster and lacquer artisans who have a level of know-how that simply doesn’t exist in other countries. 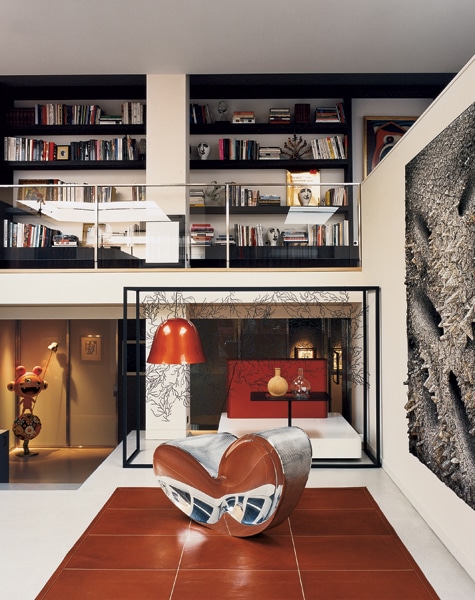 A sculptural Ron Arad chair sits on a leather rug by Agnès Comar in the Charles Zana–designed home of a Paris art collector. To the right, a piece from Kwang Young Chun‘s “Aggregation” series hangs on the wall. Photo by Philippe Garcia

Who’s next? Which new interior designers should we be looking out for?

There are people who interest me a lot, like Raphael Navot and Ramy Fischler, whose work is less opulent than their elders’. The great advantage of the firms featured in the book is that they in turn will give rise to a new generation. Lots of their young employees will eventually set up on their own. It’s really helped to revive an industry in France, which had started to become a little fusty. Before the emergence of the “new chic” generation, the person who embodied French style was Jacques Grange, and he’s 72.

Finally, do you have plans for any other books?

Yes, we’re already working on a couple of other tomes for Rizzoli. One will be on Parisian homes and the other on Italian style. We’re also hoping that there will be opportunities to produce books for brands. For us, that offers both a new opportunity economically and a way to continue doing what we do best — telling stories. 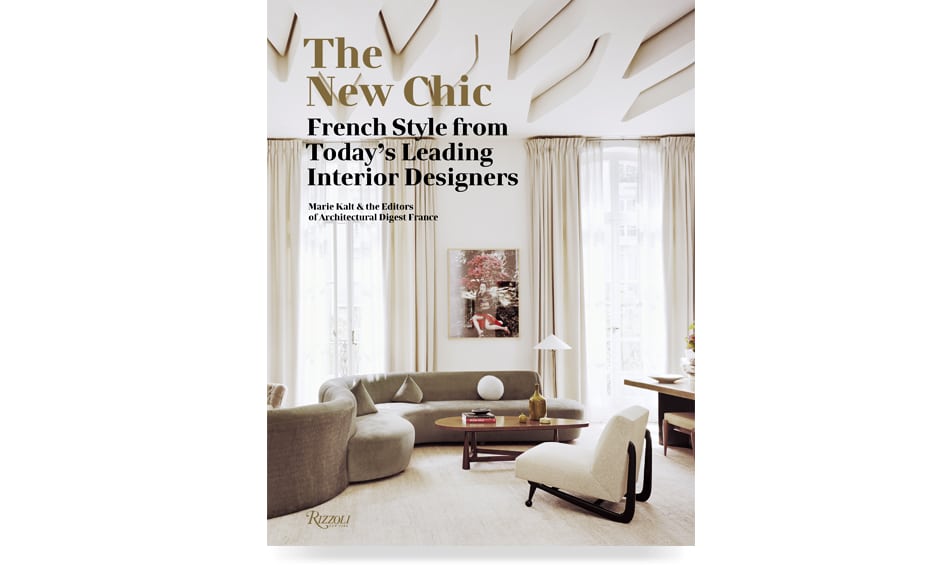