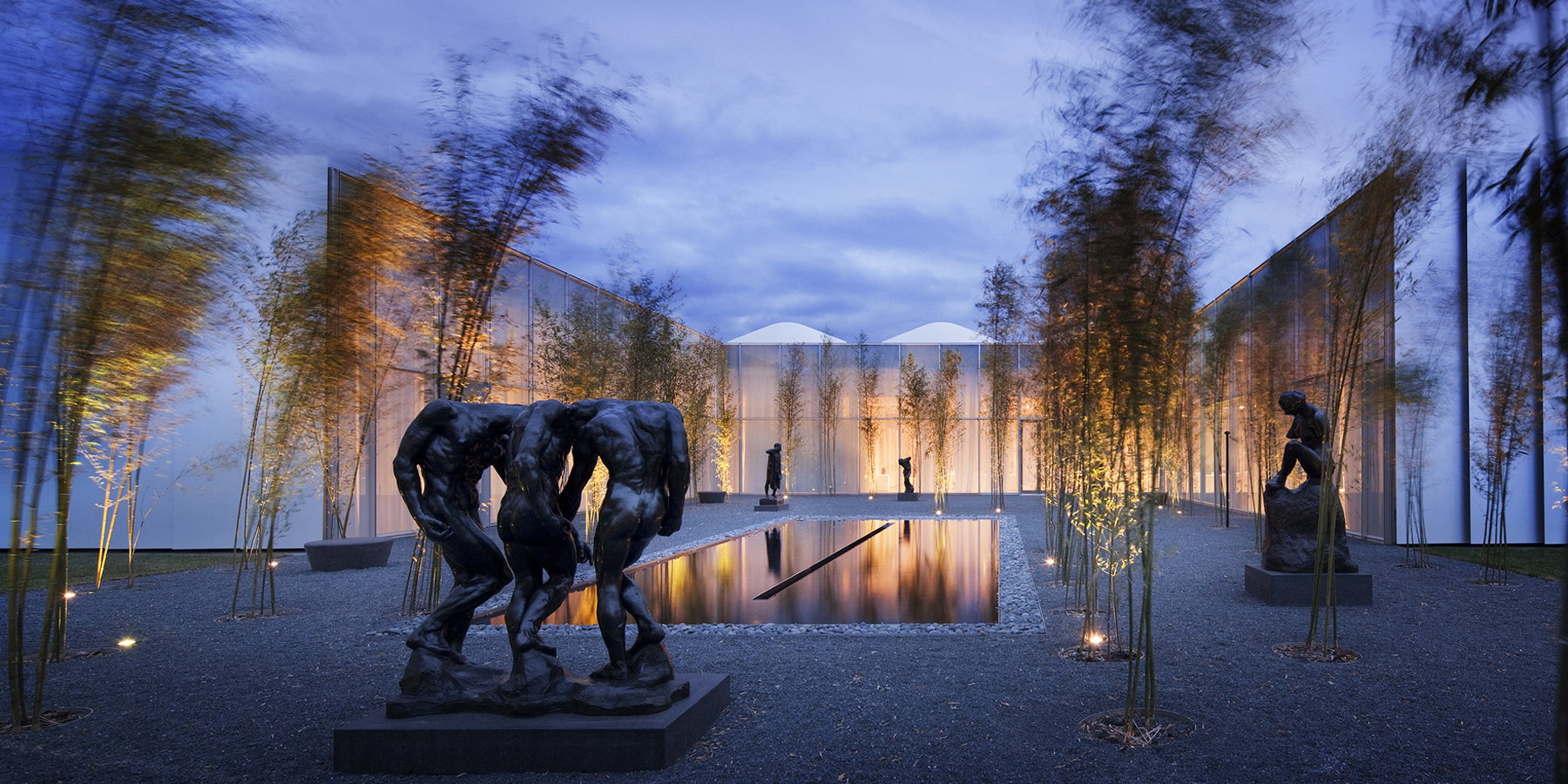 New York architect Thomas Phifer — who cut his teeth working for Charles Gwathmey and Richard Meier — employs light, space and transparency to create quietly powerful buildings that are at once ethereal and grounded, modern and timeless. 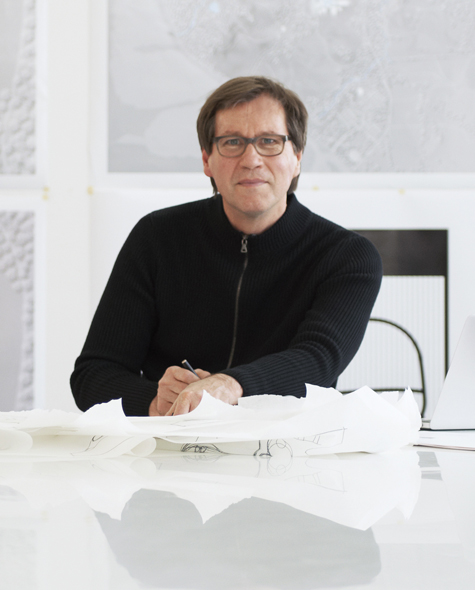 July 2, 2014The New York architect Thomas Phifer is best known for designing museums, though he also does residential work. Top: Phifer’s North Carolina Museum of Art in Raleigh opened to much acclaim in 2010. All photos by Scott Frances unless otherwise noted

Architects love building museums. They give designers unusual freedom, as well as high visibility, and, by association, they can elevate his or her practice into the realm of art. As a result, museums are the Holy Grail of commissions.

But you could say the New York–based architect Thomas Phifer stumbled into this particular type of project — even if his precise and sure-footed approach gives lie to that verb. “We do a lot of museums,” says the 61-year-old designer, who speaks softly and with a slight Southern lilt, a holdover from his upbringing in Columbia, South Carolina. “It’s incredible and fantastic, but we never planned on it.”

For Phifer, “a lot” is really more like a carefully selected handful, since he keeps his firm, Thomas Phifer and Partners, small, at just around 25 people. This size allows him to maintain focus on, and control over, all of his varied work, which includes residential projects and public spaces, like the recently completed United States Courthouse in Salt Lake City, Utah, in addition to museums.

He’s currently putting the finishing touches on the 100,000-square-foot addition to the Corning Museum of Glass, in upstate New York, which will house the world’s largest display of contemporary glass art when it opens next March. “The gallery building is formed by white glass — it’s a kind of vitrine, to honor the art inside,” says Phifer. 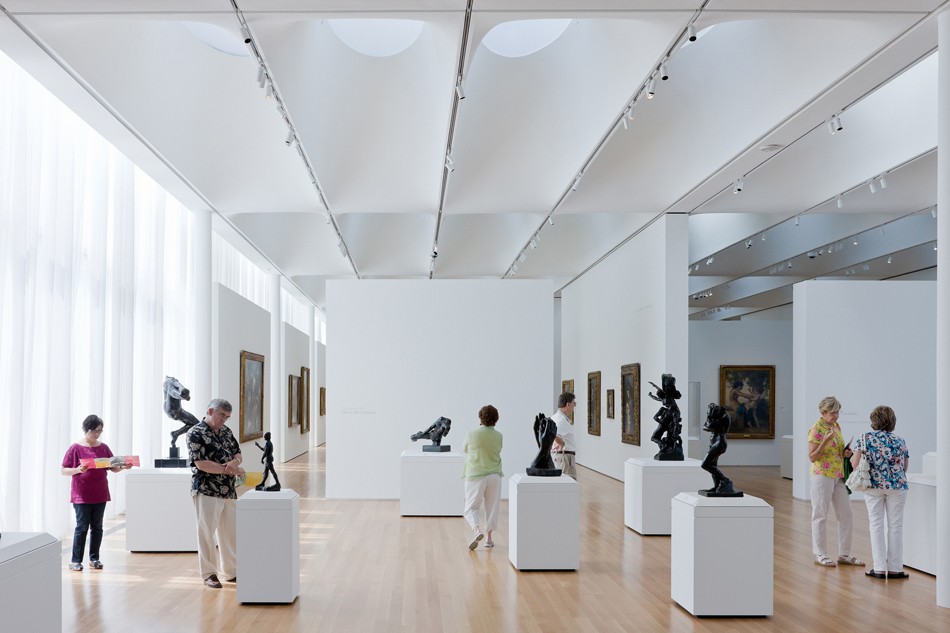 Light is filtered into the North Carolina Museum of Art via 362 precisely angled skylights. Photo by Iwan Baan

The idea of “honoring” comes up a lot for this architect. “My buildings are not noisy, they are quiet,” says Phifer. “They are simple volumes that honor the material they are made of.” The Corning program was new territory for Phifer. “I had never worked with exhibiting glass,” he admits. “And I didn’t quite understand it.” He learned quickly that “it loves light — a lot of it, but from the top.”

So Phifer created a sophisticated skylight system that lets in a huge amount of light, then diffuses it through a network of thin concrete beams resting on the galleries’ walls. “We’re getting four-hundred-fifty-foot candles there in summer, and a normal gallery for paintings is about thirty-foot candles,” he says, using the technical term for measuring brightness. “It’s going to make these pieces sparkle.”

The walls themselves are dramatically curved, a series of swooping rooms that are set inside the glass box housing the addition. “We thought these rooms could be soft,” says Phifer. “In most places, they don’t have corners, so the light comes from the top and creates a cloud-like atmosphere.” 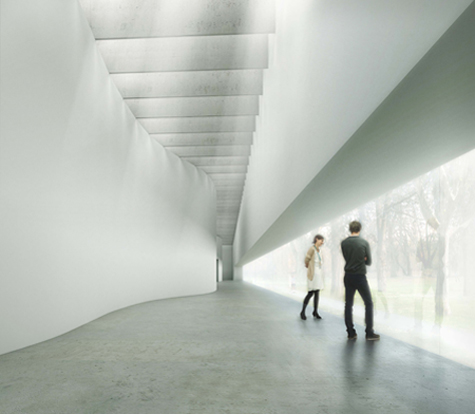 Phifer is currently finishing work on a sizable addition to the Corning Museum of Glass, in upstate New York, which will feature swooping, curved rooms set inside a glass box.

The Corning commission might not have come were it not for Phifer’s well-received work at the North Carolina Museum of Art, which won awards for its luminous, art-friendly atmosphere when it opened in Raleigh in 2010. The one-story building is clad in matte aluminum panels, and the white-walled galleries, anchored by white-oak floors, provide striking views of Rodin-stuffed sculpture gardens. Glass plays a big role here, too, both as walls, which open to internal courtyards, and also in strategically placed windows, which frame views of a rolling public park.

Here, too, Phifer took great pains to let in light — but just the right sort. No fewer than 362 skylights do the job, and they are louvered to allow in only northern rays. But there’s more to the scheme: Phifer hid a layer of UV protection into the skylights’ deep fabric-covered coffers.

In Potomac, Maryland, meanwhile, Phifer is designing a large addition for Glenstone, the astounding, by-appointment-only museum belonging to contemporary art collectors Mitchell and Emily Rales. Here, Phifer is adding to the work of his mentor and former boss Charles Gwathmey, who created the smaller, original structure, a sleek geometric building, in 2006.

For the Glenstone addition, which should open in 2016, Phifer plans to upend the concept of most museum architecture by separating the galleries into discrete, monumental concrete pavilions, each devoted to one artist; the collection is star-studded and includes work by Jasper Johns, Robert Rauschenberg, Ellsworth Kelly and Willem de Kooning. “This is not a museum that will change all the time,” he says. “This is it, forever. It seemed right, rather than clumping them together, to honor each artist separately in the landscape.”

As for the landscape of Phifer’s youth, it was distinctly magnolia-scented. “I led a very sheltered life,” says Phifer, who studied architecture at Clemson, in South Carolina. “I only lived in the Carolinas until I was twenty-two. But then I flew to Genoa for an overseas program — and the world is not the same after you do that.”

In 1980, he moved to New York City, where he worked for Gwathmey (from whom Phifer says he learned “the art of simplicity”) and then Richard Meier (who schooled him in “daylight and the purity of form”). Then Phifer went back to Italy, for a year at the American Academy in Rome, before hanging out his own shingle in 1997.

The Italian experience has stayed with him. “The time I spent in Rome seeing the ruins was incredibly helpful, seeing the heaviness there,” he says, citing that influence both on Glenstone and on other projects. “There’s a heaviness recently in my work, a solidity to it.”

Most architects talk about lightness (often so frequently you fear their buildings will float away), so a clarification is in order: “Heaviness is seeing the forces resolved to the ground,” says Phifer. “Even at Corning, the white volume has a certain amount of weight. In the same way one of those snow globes has a weight to it.” 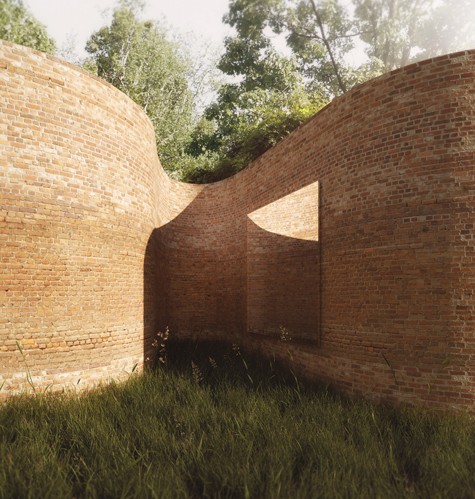 The serpentine brick barriers that surround a home currently under construction in Madison, Wisconsin, echo Thomas Jefferson’s curving garden walls at the University of Virginia.

No matter how weighty his museums may get, Phifer feels the strong allure of residential work. “We love working on houses; they are our laboratory,” says Phifer. “They are so wonderful to do, but so painful. You want so much out of them, but the canvas is so small.”

For two professors in Madison, Wisconsin, Phifer took inspiration from Thomas Jefferson’s serpentine back-garden walls at the University of Virginia. The brick walls of the amoeba-shaped house, which is only 2,000 square feet, curve dramatically, creating round, pine-floored rooms that have varying views of lush grassland. “It’s nestled into the landscape,” says Phifer.

Several high-profile art-world clients have also looked to Phifer for serene retreats. The design dealer Cristina Grajales and her wife, Isabelle Kirshner, commissioned him to build a small Hudson Valley getaway; the architect gave them a simple painted-cedar box, then added an outer layer of perforated steel along the structure’s longer sides. For the late museum director Tom Armstrong, meanwhile, Phifer created what the client called a “glass shoebox,” a transparent pavilion on Fisher’s Island, New York, built on the foundation of Armstrong’s former house, which had been destroyed by a fire.

“My buildings are not noisy, they are quiet. They are simple volumes that honor the material they are made of.”

For a home on the exclusive enclave of Jupiter Island, Florida, Phifer pulled apart the rooms — similar to the way he is separating the galleries for Glenstone — to make a series of interlocking pavilions. “It creates a village atmosphere,” he says of the simple glass-and-plaster volumes, which have old-fashioned white terrazzo floors. Plus, it lets him control the flow between the spaces, creating a sense of progression that has gotten lost in the era of McMansion-style home, with their arena-sized eat-in kitchens. “Here, it’s leading people through,” he says. “A kind of choreography.”

As an architect, Phifer likes to lead, but he does so gently, which is why his quiet buildings — whether museums or private homes — have such staying power. “I’m a little bashful, a little shy,” he says. “I like being closeted here in the office and doing the work. I’ve learned that’s what gives me great joy.” 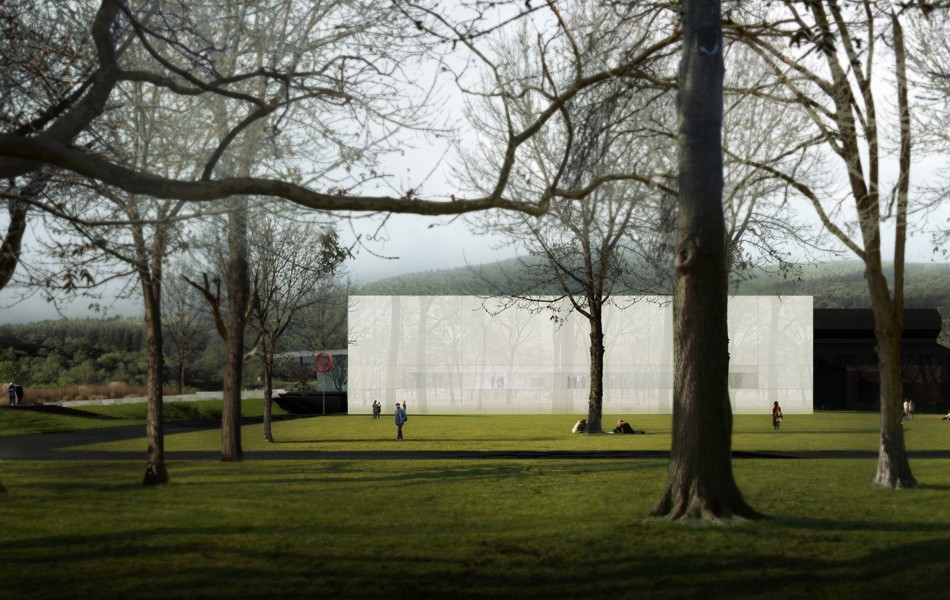 Phifer’s white-glass, rectangular Corning addition, which opens in March 2015, represents “a kind of vitrine, to honor the art inside,” he says.