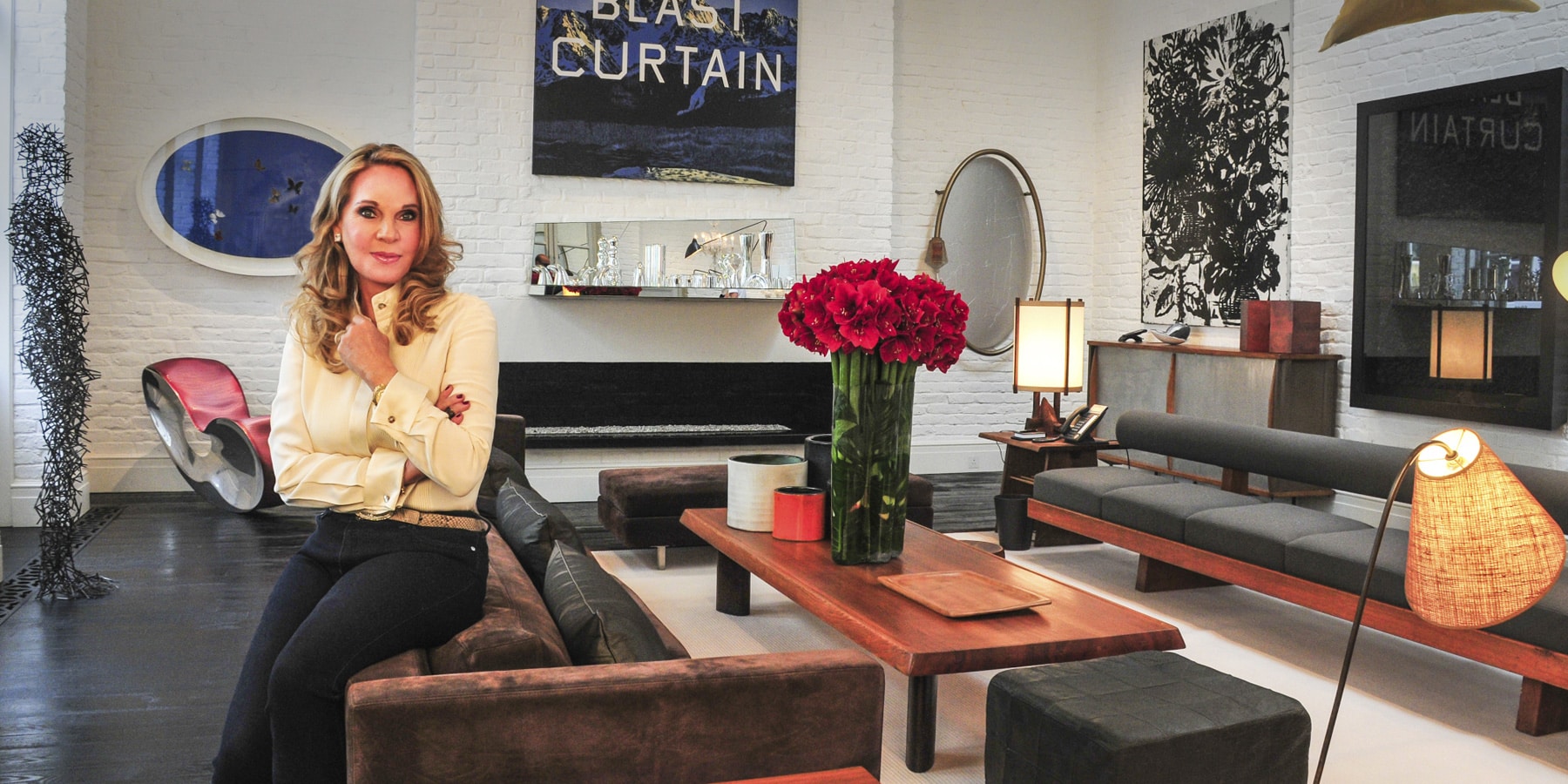 Tiqui Atencio Delves into the Mysteries of Collecting Art

The philanthropist and art aficionado chronicles the regrets and successes of art lovers in their quest to acquire great works — cartoons included. 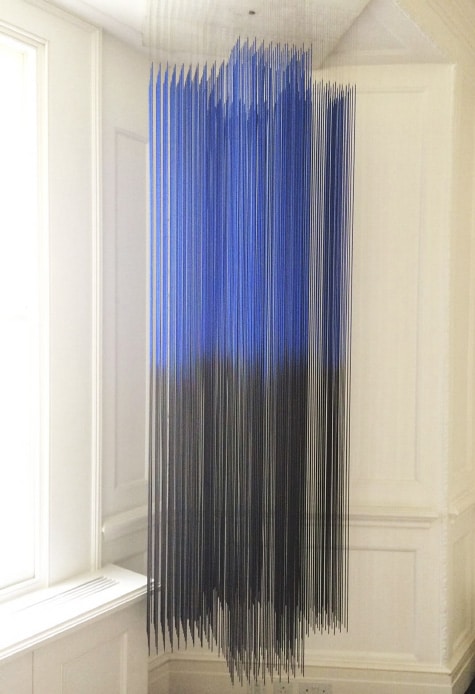 “The Jesús Rafael Soto appealed to me because Blue et Noir, Penetrable Suspendu (Suspended Sculpture Black and Blue), 1968, is probably the first known attempt by the artist, a Venezuelan and fellow countryman, to pin down the concept of what he called ‘suspended volumes,’ ” Tiqui Atencio says of the piece, pictured above, which is part of her collection. “When I saw it, I flipped and knew I was in front of museum-quality work.” . Top: Atencio writes that many of the collectors she interviewed for the book do not like that characterization. “Often they said, ‘I am not a collector, but I love art, and I just need to live with it.’” Images courtesy of Tiqui Atencio, unless otherwise noted

The Venezuelan-born philanthropist Tiqui Atencio has long been admired for her charm, her glamorous Côte d’Azur parties — and her top-tier collection of modern, contemporary, pre-Colombian and Latin American art. Recently, she also became an art world Scheherazade, with the publication of Could Have, Would Have, Should Have: Inside the World of the Art Collector (Art/Books), based on interviews with nearly 100 fellow collectors, including Adam Lindemann, Patrizia Sandretto Re Rebaudengo and Eli Broad, to name but a few.

One might have expected the book, which is illustrated with satirical cartoons by the artist Pablo Helguera, to be a how-to collecting manual that elucidates the market. Instead, it’s all about the mystery of collecting and the fascination it exerts over high-stakes players who can afford to get hooked. In chapters like “I Gotta Have It” and “What Was I Thinking?” Atencio, who sits on several museum boards, relates the kinds of anecdotes you might hear late at night in someone’s Venice palazzo. We learn how Fatima and Eskandar Maleki lost their families’ collections of carpets, miniatures and Persian-Islamic art and guns to the 1979 Iranian revolution and started a new collection from scratch; how the London dealer Anthony d’Offay transformed a tiny book-dealing business into a contemporary-art gallery empire; how the Young British Artist Damien Hirst started his collection by purchasing works by his friends to help them out financially. In Atencio’s hands, collections begin to look like mirrors of their owners’ personalities and daily lives.

Similarly, Atencio maintains, the art world isn’t based on making acquisitions but on building community. “People go to Basel, to Miami because of people,” she says. “It has enriched my life, and this richness is shared by so many people I interviewed.”

Atencio spoke with Introspective soon after her visit to Art Basel Miami Beach, where she perused standout works of art with the Tate’s Latin American Acquisition Committee, which she founded.

Your book encompasses such a broad range of people. How did you choose?

I knew it had to be about storytelling and conversations. So my criterion was to let destiny work for me. If I called a person and they responded, then it was a must — it was made in heaven. If the person didn’t respond, I left it. As for artists, I like to know them, to have friendships with them. They are antennas of the world. 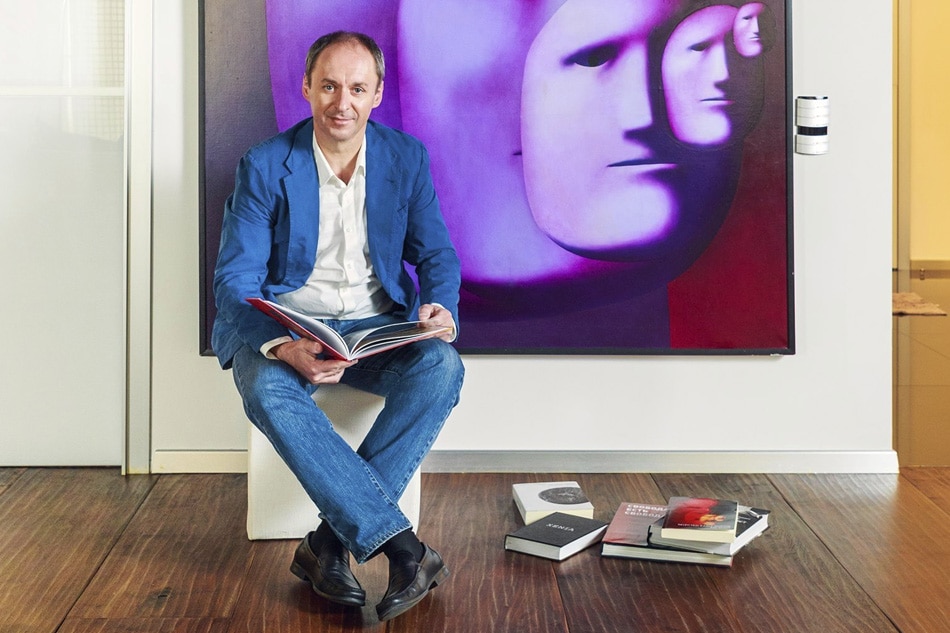 Atencio interviewed around a hundred of her fellow art lovers for Could Have, Would Have, Should Have, including those featured in this slideshow, to find out why they started collecting and what keeps them going. “I am a former scientist, and I tackled it from that perspective,” says Igor Tsukanov, one of the world’s leading collectors of postwar Russian art, describing his acquisition strategy. “I identified my objective and methodology and defined my resources – how much could I spend to achieve the goal?” 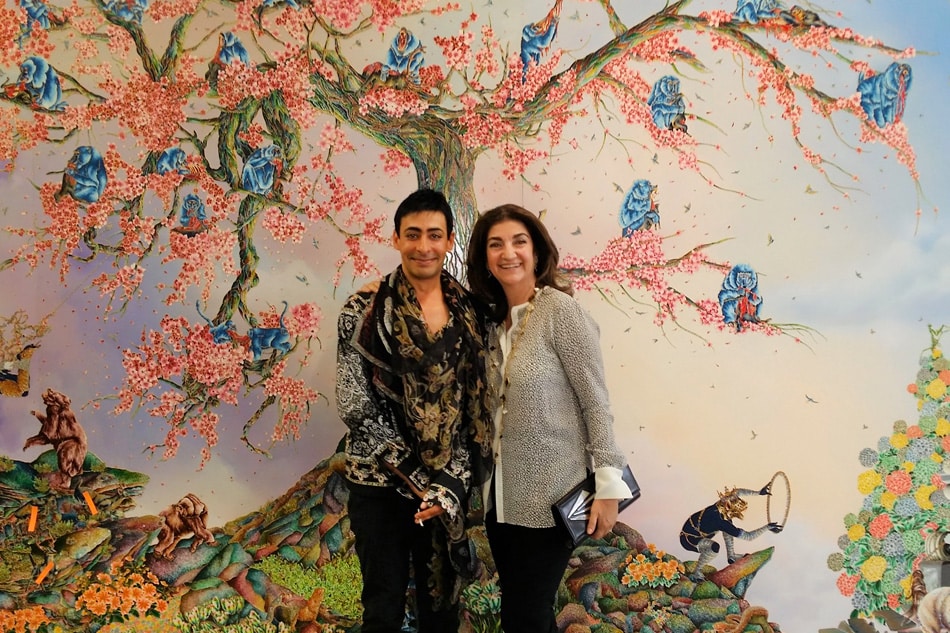 Eskander Maleki says his wife and fellow collector, Fatima, is always trying to help young artists: “She is practically a free PR machine for all of them.” Here, she is pictured with artist Raqib Shaw in front of his work Paradise Lost, 2001-2013. 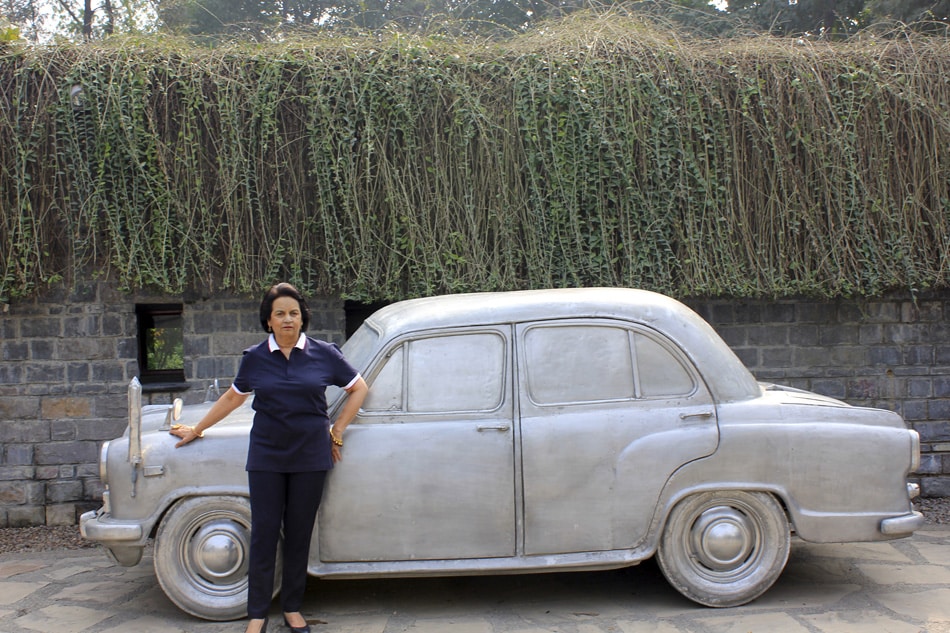 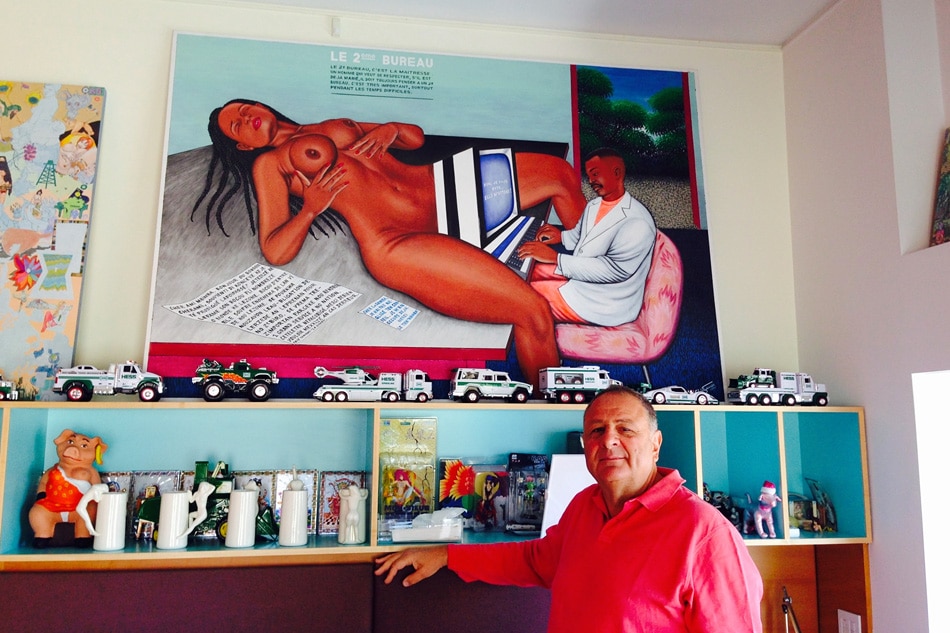 Businessman, tech investor, photographer and philanthropist Jean Pigozzi, who has the largest private collection of contemporary African art in the world, regrets spending his money on items other than art when he was younger. “Once I went to see Basquiat. His paintings were going for $3000 at the time, and I was interested,” he says. “I had bought from his first show, for $2,800. But I also wanted to buy a Comme des Garçons suit for $1500, so I didn’t buy one this time round. It would be worth $30 million today.” 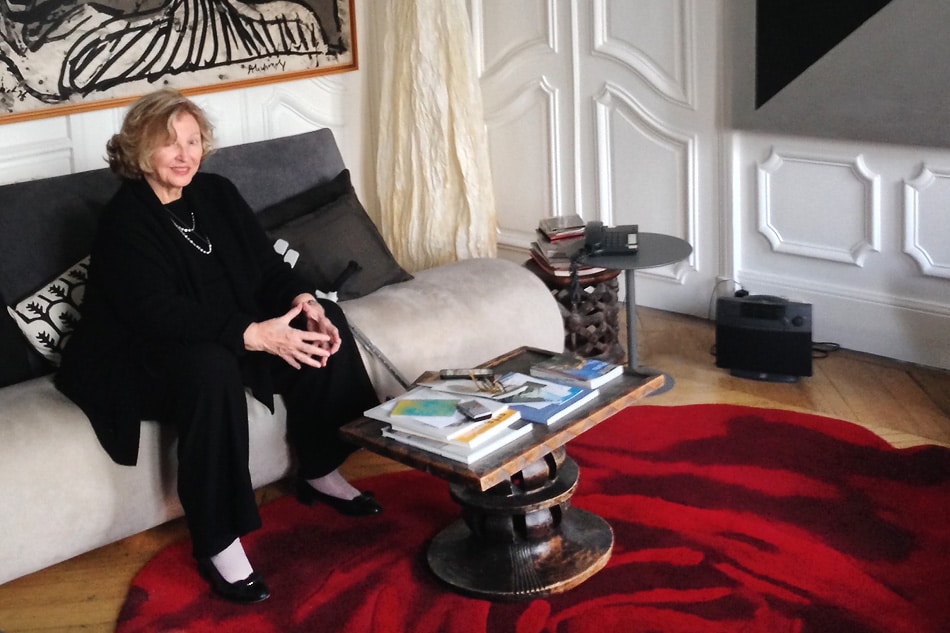 Monique Barbier-Mueller’s father, Josef Mueller, was such a prolific collector that she and her husband opened two museums to house his collection. But she herself does not want to be called a collector. “I am an amateur. I am not a collector, as I have absolutely no system, no strategy. If I like something, if I think it is worthwhile or serious, and if I feel that I am going to enjoy it in ten years’ time — and if I am lucky enough to be able to afford it — then I will buy it. Only afterward will I think about where I might put it.” 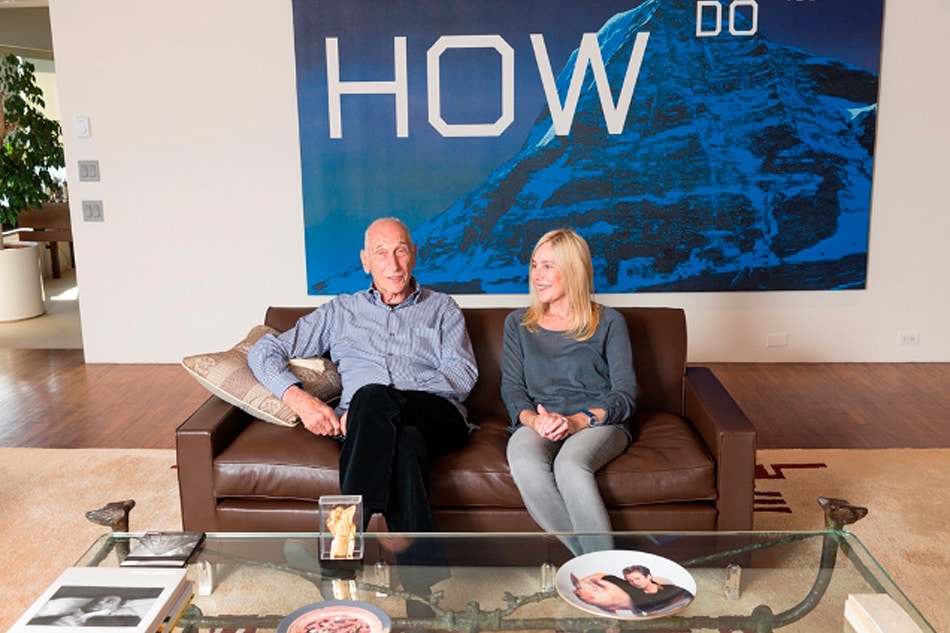 Chicagoan industrialist Stefan Edlis and his wife, Gael Neeson, have built one of the world’s greatest collections of Pop art, purchasing only pieces that they can install in their home. “I want to live with it,” Stefan says. “We never buy anything that we cannot put up right now.” 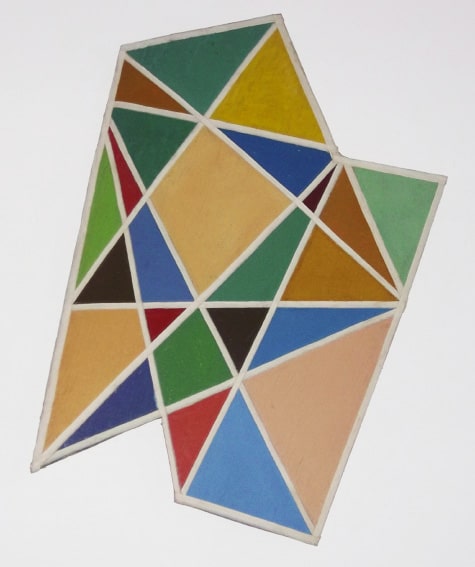 Atencio says she was interested in this Raúl Lozza piece because “it was the first experiment of an Argentinian artist, in 1945, in a movement that was to be called ‘concrete invention.’” She adds, “When I saw the back of the painting and I saw ‘Boceto #0’ written, which means Sketch #0, I simply had to have it. The work was too historically important to let it go by. I knew Lozza had numbered his works starting with #0, and this was it — the very first one!”

What makes someone a collector, and how do you know when you’ve become one?

Many of the people I interviewed didn’t like to be called collectors. And most didn’t like the market aspect because they didn’t start their collections thinking, “This is going to increase in price.” One, Patty Cisneros [Patricia Phelps de Cisneros], suggested that we invent a new phrase, maybe “lovers of art.”

I think you realize you’re a collector when people start talking about your collection and wanting to see it. You know you are one when you can’t stop buying. It’s a bug that bites you. It’s when you begin thinking, “I don’t care where I’m going to put it, I don’t care how much I have to pay for it, I have to have it.”

Have there ever been pieces you desperately wanted but couldn’t get?

Many, many. There was a portrait by Marlene Dumas that I lost to Charles Saatchi at auction and a ceramic mantelpiece by Lucio Fontana that was meant to be in my house forever, but my bid wasn’t even close.

This is the name of the game. Everyone has great regrets and great successes. We always say to each other, “Just think of what you do have.” That is the big consolation. It has always been difficult to get a good work. There is always competition. 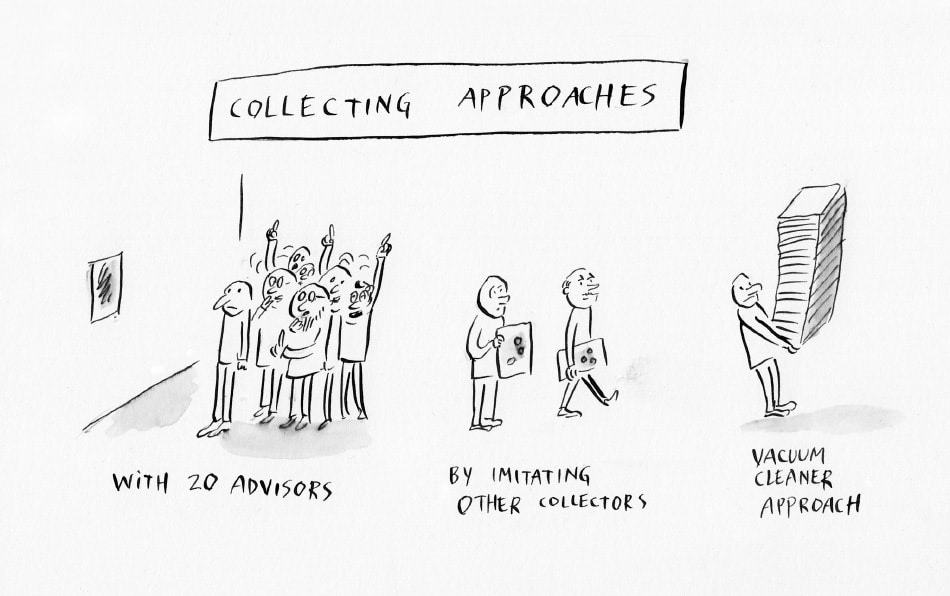 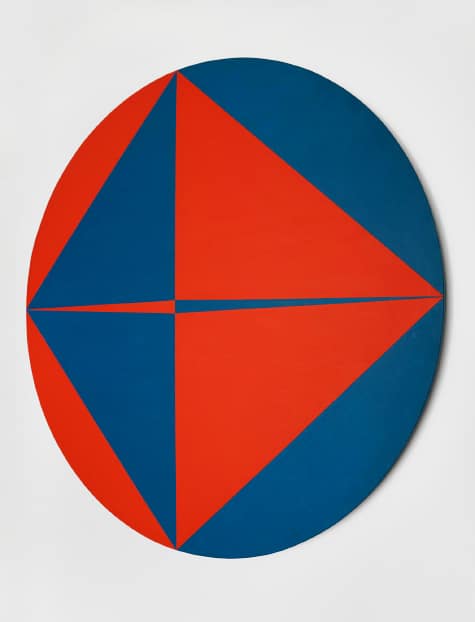 “I really wanted a Carmen Herrera, as I loved her works and I had missed out on the first opportunity that I was given to acquire one. It was her first exhibition at the Latin Collector Gallery. She was in her late eighties, and no one had heard of her. A couple of years later, I went to Tony Bechara’s studio, and there I fell in love with Horizontal, 1965, again.”

Tell me about a time you did get what you wanted.

I managed to get one of Christopher Wool’s wallpapers on my first trip to Cologne. I saw a gallery filled with these beautiful paintings. I walked in and met the artist and bought one for no money at all. I picked the best, to the point that many times I’ve been asked to lend it.

The other that pops into my mind is a Jeff Koons sculpture from the “Made in Heaven” series — the terriers Three Puppies. I walked into Anthony d’Offay’s booth on the last day of Art Basel — it must have been twenty years ago. In those days, you could get great deals that way. You’d say, “What are you going to do, take it back? It will cost you money.” But I didn’t get the Wishing Well [from Koons’s “Banality” series]. I couldn’t afford both. It is one of my biggest regrets.

Is it important to be able to live with art?

Most people very much want to live with it. That’s very much in their minds when they’re buying. If they don’t, it’s because they are moving it around with different hangings.

Is it okay to worry about your art going with your furniture?

It’s not a stigma to say that, especially for young couples who are beginning to collect. Stefan Edlis, for instance, says he’s a decorator at heart, and I notice that many collectors have decorators too. Collectors have an aesthetic eye. It’s normal for them to want everything to be aesthetically pleasing. 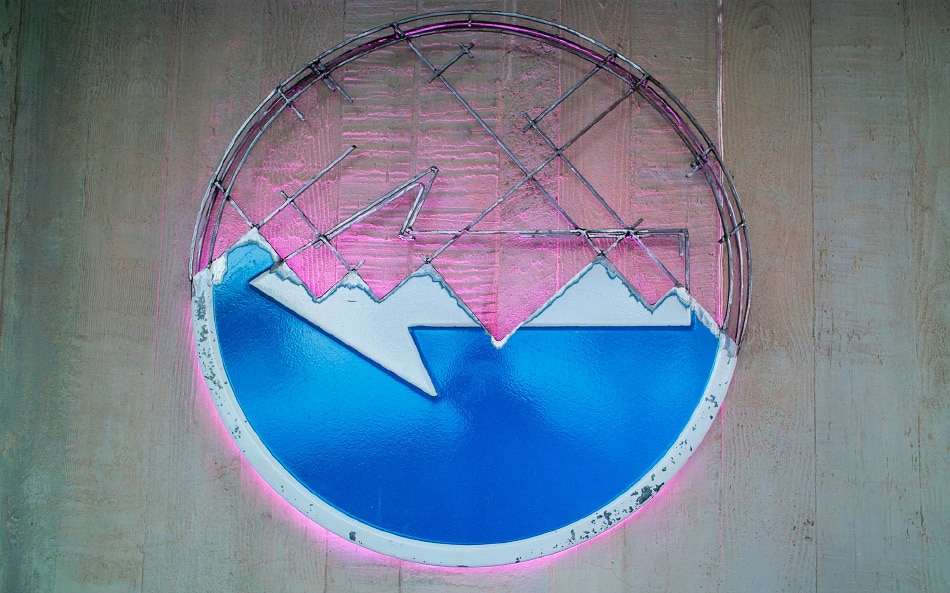 “Juan Garaizabal is from Spain, and he is part of a generation of artists that transformed the streets of Berlin into an open-air gallery at the turn of the century,” Atencio says. “I was attracted to his work because it transmits a certain energy through the effect of the purple light he uses. It speaks about the public space, history, time, absence, drawing in the air. And spending one night on top of a ladder to unscrew a traffic signal — that an artist would go to such lengths to create a work of art certainly added to my fascination with this piece.” 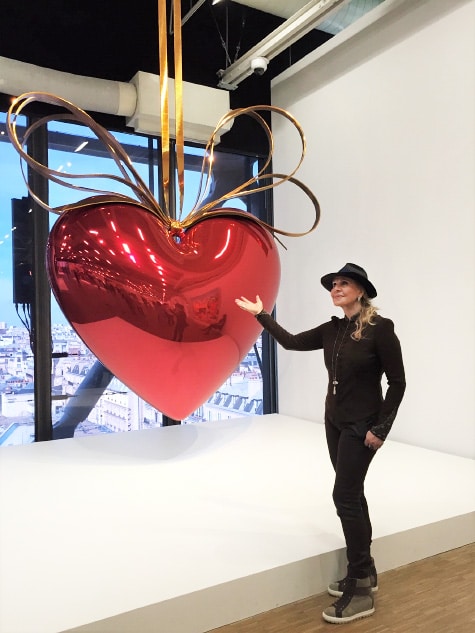 “Jeff Koons’s Hanging Heart was in an exhibition two years ago at the Centre Pompidou, in Paris. I don’t know who it belongs to now, it could be the artist proof, but this work was definitely my ‘could have, would have, should have.’ “

As well as art, you collect mid-century furniture and ceramics by Jean Prouvé, Charlotte Perriand, George Nakashima and others.

Yes. Now that furniture is also collectible, I’ve been buying modern furniture. But even when I had eighteenth-century furniture, in my first house in London, I found that it married beautifully with contemporary art. I think modern and contemporary art goes well in any space.

So you believe in mixing periods?

Definitely. One contemporary art museum I love is the Castello di Rivoli, in Torino, which is in a baroque castle. And then there’s the Louvre. Koons’s Hanging Heart went so beautifully there.

One of my collectors [in the book], the Belgian antiques and art dealer Axel Vervoordt, has a fourteenth-century castle. He has surrounded himself with contemporary art and all the pieces he’s collected from different centuries, and he’s mixed everything together with such good taste.

Frankly, there is no rule, as long as it’s in good taste.

(or support your local bookstore) 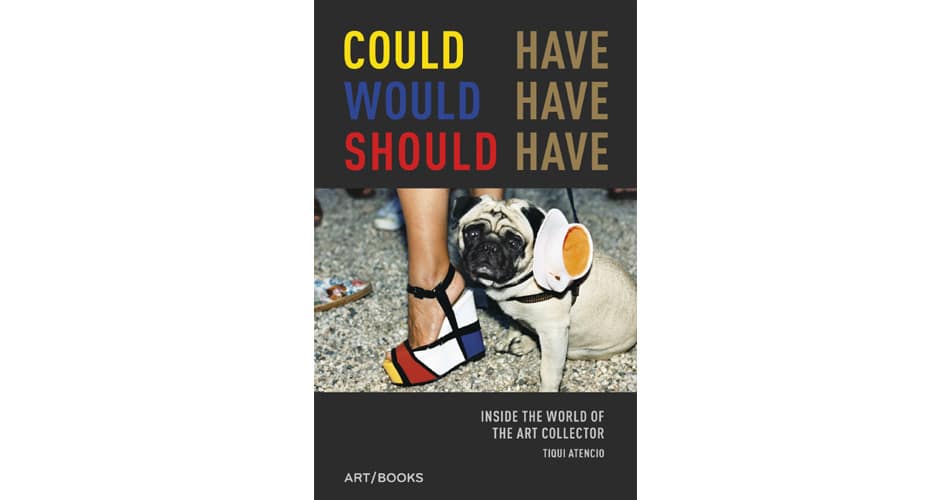