Objects of Desire from the Far East 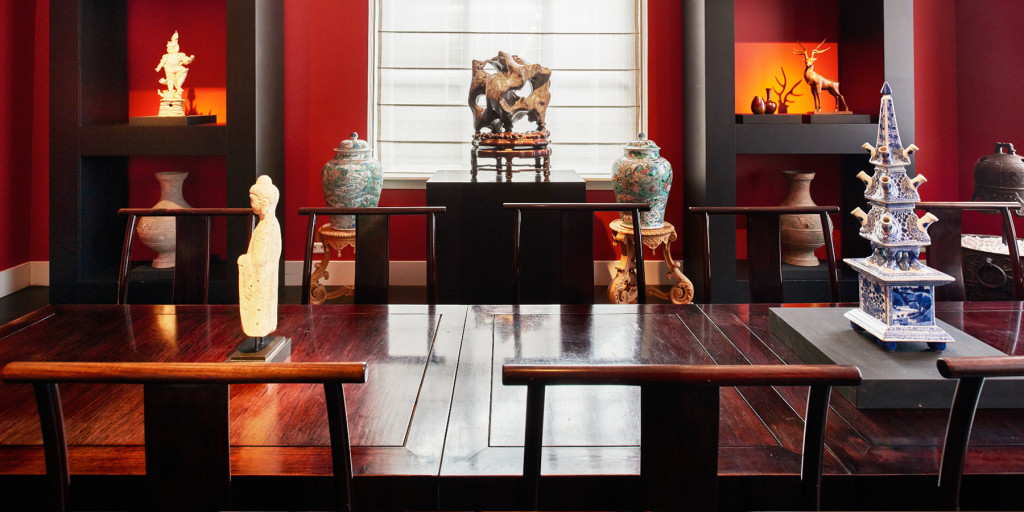 Long an anchor of the TEFAF fair, Vanderven Oriental Art, a Dutch dealer in remarkable Asian objects, treats connoisseurship as a soulful endeavor governed by instinct and an impeccable eye. 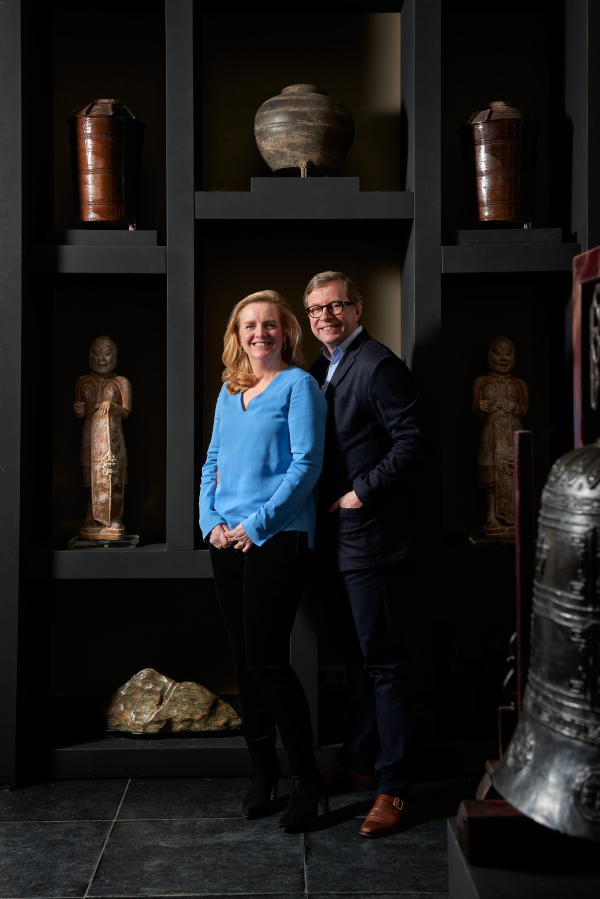 February 22, 2016Floris van der Ven stands with his wife, Nynke van der Ven-van Wijngaarden, in the main hall of Vanderven Oriental Art, the gallery that his aunt and uncle founded in the late 1960s and Floris now owns. The bronze bell at right was made in Japan around 1870. Top: Located in the medieval Dutch city of ‘s-Hertogenbosch, Vanderven, whose Red Room is shown, specializes in Chinese porcelain and artwork.

As a young apprentice in a red dust jacket working for the London antiques dealer Spink & Son, Floris van der Ven was given the opportunity to handle a collection of about 40 early-19th-century Chinese glass objects. “To see that much glass together is a unique experience,” says van der Ven, who ported the pieces, “fetching this and that,” and helped with cataloguing each object by period and type.

Thanks in part to that early experience, van der Ven, who today is owner of Vanderven Oriental Art, a Dutch specialist in Chinese porcelain and works of art, says he can place almost any piece of Chinese glasswork simply by taking it in his hands. “It’s the first two seconds,” he says, seated in a straight-backed Chinese lacquer chair in a showroom in his gallery in the medieval Dutch city of ‘s-Hertogenbosch, commonly known as Den Bosch. “What you have to sense is the soul of an object, the heart.”

But this sense is not instinctual, any more than a professional boxer’s perfectly aimed punch is reflexive. His are the cultivated and honed perceptual skills of a man who has spent some 30 years handling ancient Asian objects. Touch, he says, is perhaps the most important tool in his expert’s kit.

As he walks through his gallery, a renovated 19th-century Latin school with 16-foot-high ceilings, van der Ven frequently reaches out to lay his hand on the objects or pick them up. In one room, he lifts an early Kangxi period (1661–1772) enameled-biscuit model of a mountain — part of a pair that sells for about $167,000 — turning it over to reveal places at the base where the enamel is thinner. This was intended by the artist, he explains, to reveal the structure of the material. In another room, his fingers graze the faces of two almost-life-sized Song Dynasty warriors posed on pedestals, made between the 13th and 14th centuries; their glass eyes bulge and their tongues wag at phantom temple visitors. 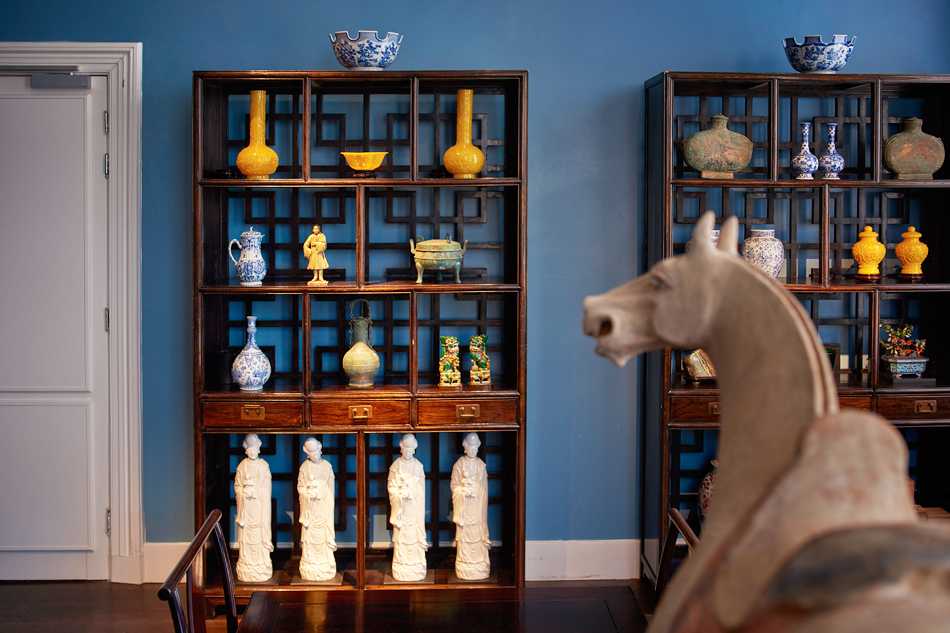 To prove Asian art can work in any interior, Van der Ven chose contrasting hues for the two showrooms in his gallery. Here, in the Blue Room, a Chinese terra-cotta horse from the Tang Dynasty (618–907) stands in the foreground, while two pairs of blanc de chine figures from the Kangxi period (1661–1772) are displayed on a bottom shelf. 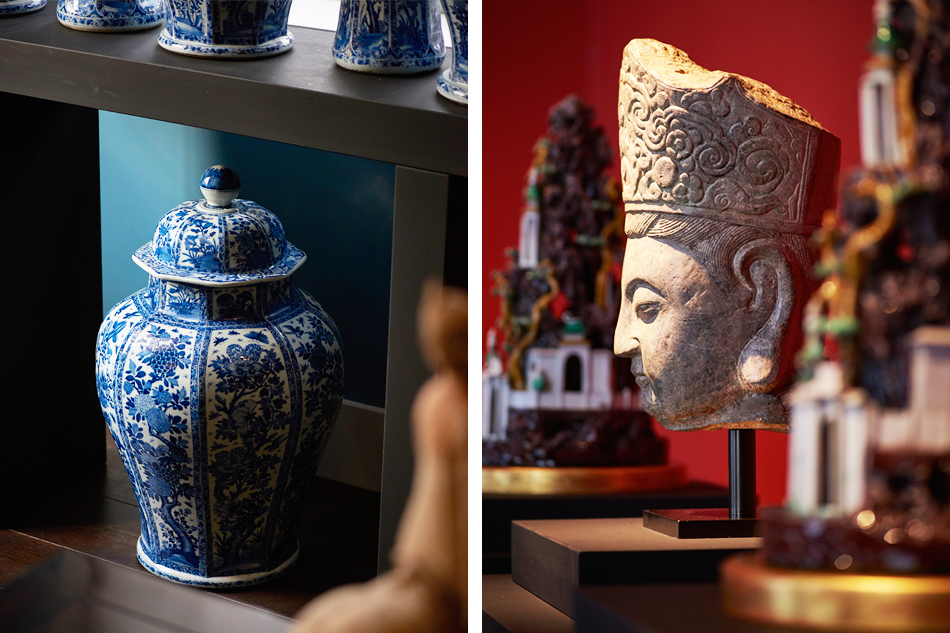 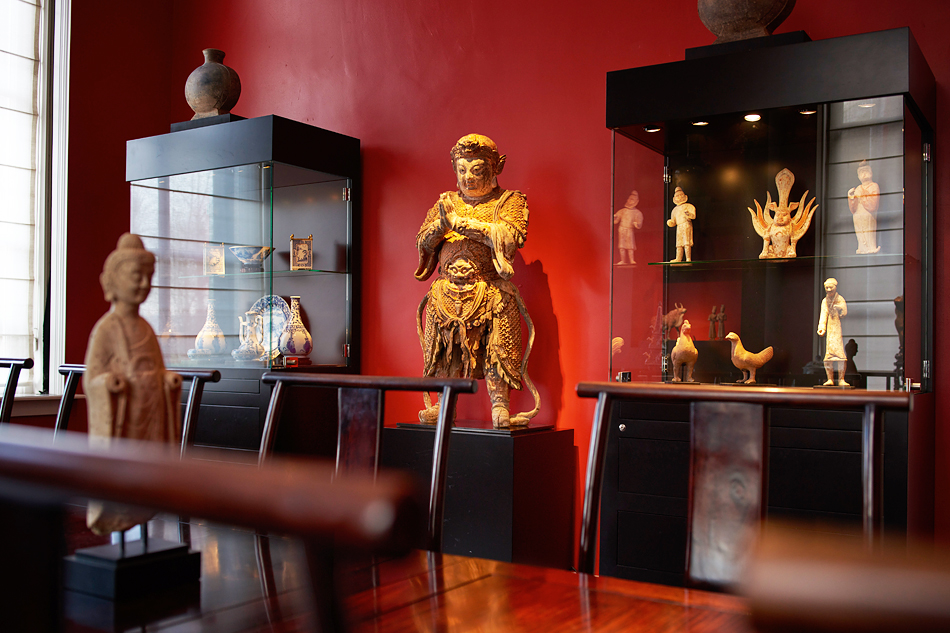 An array of terra-cotta human and animal figures from China’s Han (206 B.C.–A.D. 220) and Tang Dynasties are on display in the Red Room. 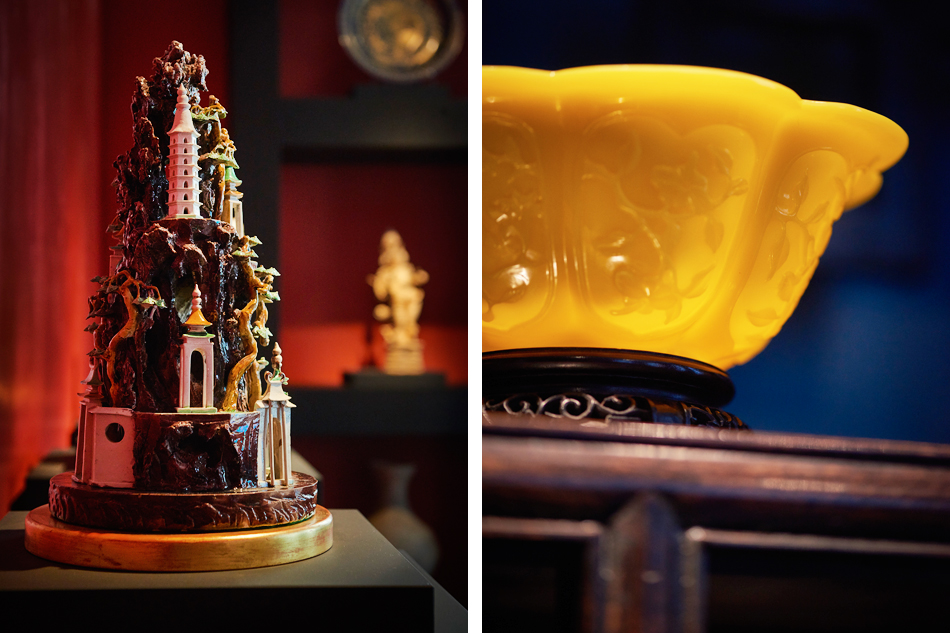 Left: One of a pair of Chinese models of mountains from the Kangxi period. Right: A yellow Chinese imperial glass bowl, ca. 1900. 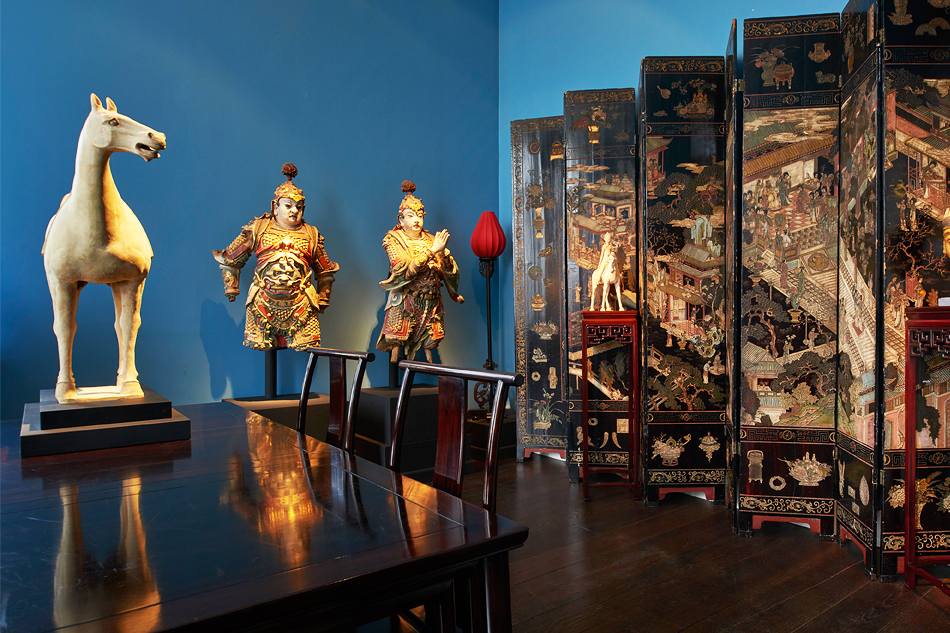 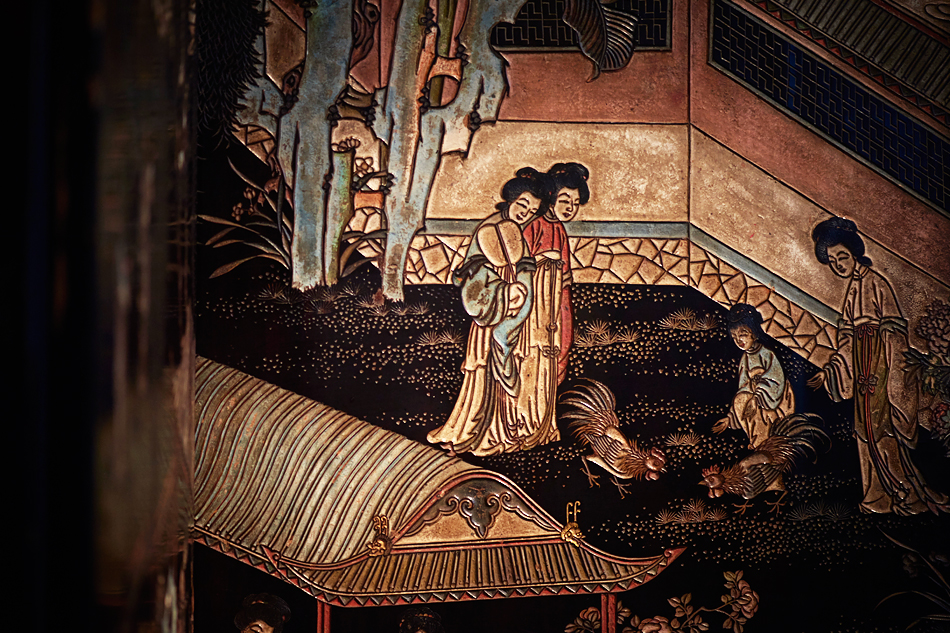 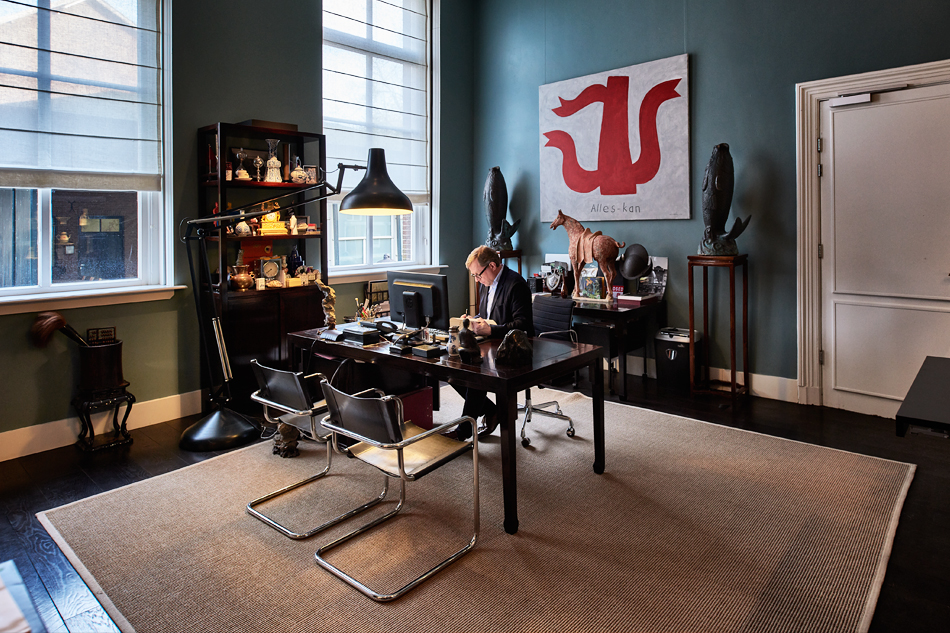 Van der Ven sits in his office, where a large red-and-white painting, Alles Kan (Everything Is Possible), hangs near the door. The dealer commissioned Dutch artist Klaas Gubbels to make the piece in 2014.

“They’re so lifelike,” he says, gazing at the pair, which sells for about $1 million. “A good dealer always touches the pieces because you also learn through your fingers. I know roughly what kind of feeling to expect — you can feel proportion, structure. This is the second time in my career we’ve come across some of these.”

“A good dealer always touches the pieces because you also learn through your fingers.” 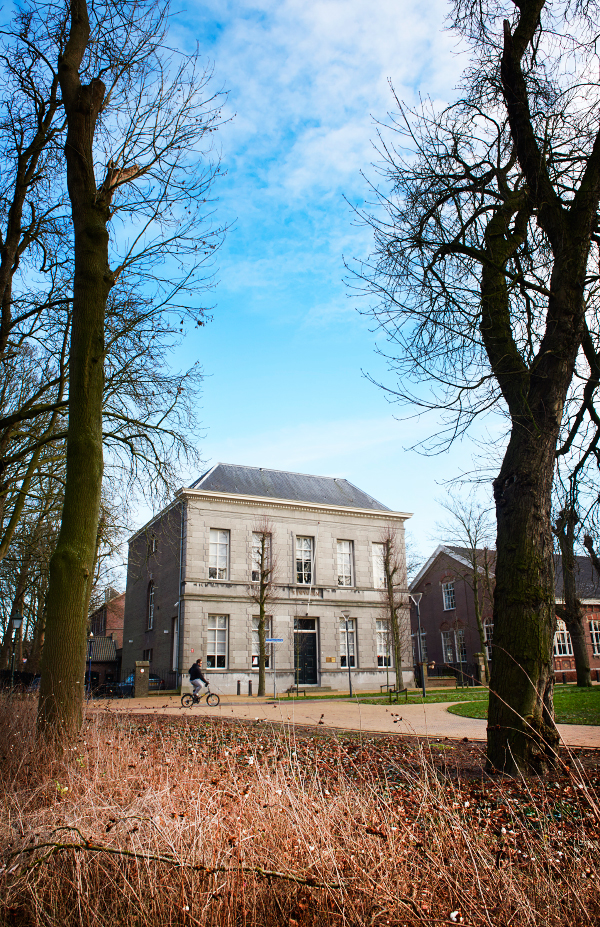 The gallery moved to this 19th-century former school building in 2007, a year before van der Ven began managing the business.

Van der Ven has been learning this trade almost his whole life. The business was founded in 1968 by his aunt and uncle: brother and sister Bea and Clemens van der Ven. (Clemens was instrumental in helping to establish TEFAF in Maastricht.) A little more than a year later, Bea left the firm and Clemens’s wife, Neeltje, who was also a professional antiques dealer, joined the firm. Clemens and Neeltje hired Floris to run errands when he was still a teenager. After a while, they suggested that he go abroad to do an apprenticeship, and he secured one at Spink & Son, among the most respected dealers in antique Asian art. There, he says, “I was fortunate to get my training before 1997,” the year that Hong Kong opened up to the West and the market in fake Chinese porcelain emerged.

“By handling the pieces, you can actually learn what is old and what is new,” he says. “The theoretical knowledge is a plus.” He developed a feel for the work, as well as a personal interest, eventually joining his family’s firm in 1992 and becoming a partner four years later.

Van der Ven still remembers the first great discovery he made without the help of his aunt and uncle. He was about 19, attending a small auction, when he chanced upon a blue-and-white ewer that was missing its handle. After spotting the ewer in a box full of other random stuff, he quickly determined that it had been made in China around 1640. “I bought it for, like, two euros,” he says. “I still have it, and of course, I continue to collect. You have to have the pieces at home to have the real vibe. It’s a twenty-four-hour-a-day passion.”

These days, it’s a passion he shares with his wife, Nynke van der Ven-van Wijngaarden, whom he met in 1996 at TEFAF, where Vanderven is among the prestigious fair’s most prominent galleries, with a booth just off the entrance. Nynke then had a role with the fair’s PR department, and she now works with Floris as the firm’s public relations and marketing manager, as well as authoring its catalogues. The couple has two sons, ages 11 and 13.

Vanderven will bring about 250 pieces to TEFAF next month (March 11 through 20), including a blue-and-white tulip vase from the Kangxi period that the dealer believes is the largest in the world (priced at about $100,000) and four 30-inch-high, 90-pound corroded bronze bells from the 4th century B.C. (offered as a set for $2.8 million). 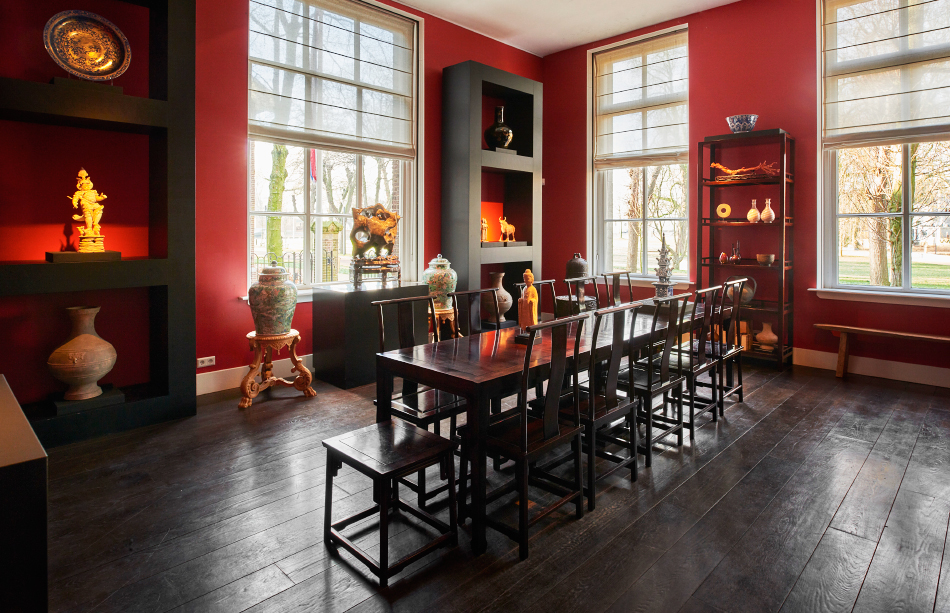 In the Red Room, contemporary Chinese furniture, which van der Ven helped design, is juxtaposed with the ancient pottery.

Van der Ven, who became owner of the business in 2013, counts among his clients such venerable institutions as the Rijksmuseum; the Peabody Essex Museum, in Salem, Massachusetts; the Asian Civilizations Museum, in Singapore; and many private individuals he prefers not to name. These predominantly reside in Western Europe and North and South America, but the gallery has a growing base of Chinese collectors. Because Vanderven is nearly 50 years old, the dealer says, he’s lately been buying a lot from people who purchased works from his family decades ago.

“We’re lucky that our company has made a full life cycle, which means that we can easily buy from our own clients. It’s a very important source. The works haven’t been on the market for forty years,” he says, adding with a smile, “and we know the provenance is solid.” 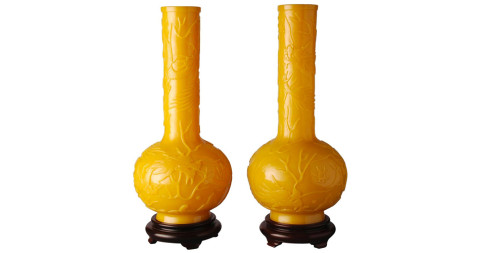 “These are all about the shape and incredibly strong color.” 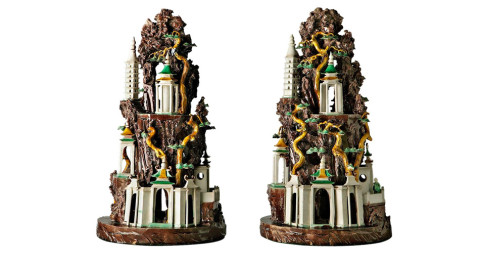 “These mountains were once in the possession of the famous New York collectors Rafi and Mildred Mottahedeh.” 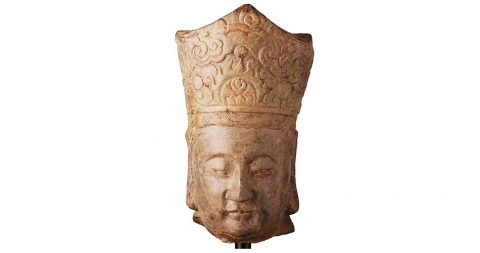 “The face of this figure is so peaceful.” 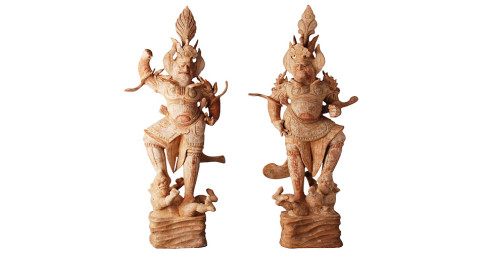 “These guardians are magical figures that ward evil spirits away from the dead.” 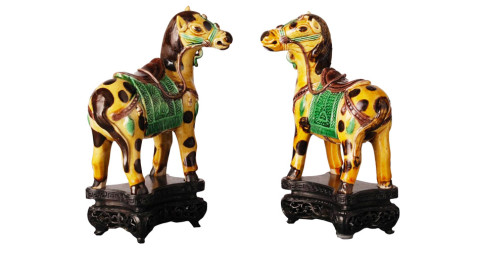 “These horses were shown in an Art Treasure Exhibition in London in 1932 and were considered real trophies.” 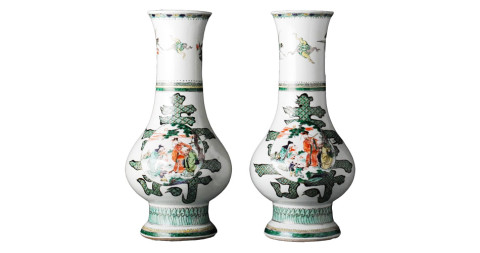 “This pair of vases was part of a large group of Chinese porcelain bought by J. Pierpont Morgan in 1904 from the famous collector James Garland.”