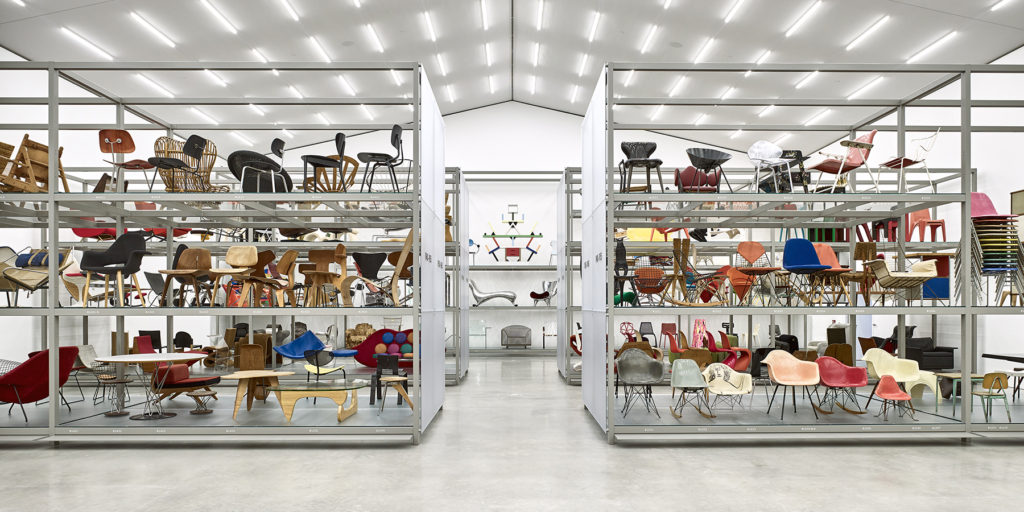 The Vitra Design Museum has opened the Schaudepot, a Herzog & de Meuron–designed space showcasing thousands of pieces by design legends of the 20th century and beyond. 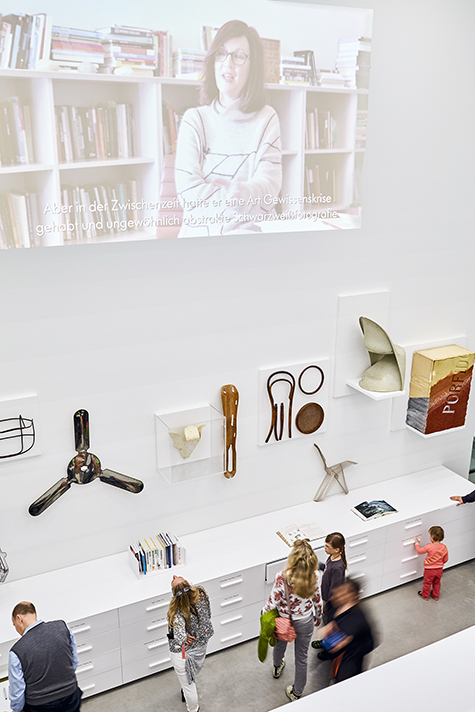 For years, one of the world’s most important furniture collections was hidden in a basement beneath a sawtooth-roofed factory in Weil am Rhein, Germany. Today comprising 7,000 pieces of furniture, approximately 1,000 lamps and an extensive archive — which includes documents and ephemera from the estates of Charles and Ray Eames, Alexander Girard, Verner Panton and other design greats — the Vitra Design Museum‘s holdings have recently been unveiled in an above-ground, Herzog & de Meuron–designed home. The collection’s installation in the Schaudepot (roughly “exhibition hall” in English), as the new building is called, marks the first time that the works have gone on permanent display.

“With this new opening, the museum develops into a transparent, international hub of design research, exhibition and discourse,” says Mateo Kries, who was instrumental in the Schaudepot’s curatorial concept as the co-director of the museum.

The museum was established in 1989 by Swiss furniture company Vitra, a proponent of modernist design since 1950. The company’s owner, Rolf Fehlbaum, began amassing the holdings in the early 1980s, but what started as Fehlbaum’s private collection slowly transformed into an institutional one, and today it covers the most important “periods, protagonists and themes” in furniture design, as Kries puts it. These impressive holdings have now been transferred to the Schaudepot, where, among other highlights, visitors will find early bentwood pieces; iconic designs by Le Corbusier, Alvar Aalto and Gerrit Rietveld; modular furniture; and collaborations by the Dutch collective Droog.

The Schaudepot sits on Vitra‘s sprawling German campus — on the German side of the Swiss border, a 15-minute drive north of Basel — where it is the latest in a series of starchitect-designed buildings. These include another Herzog & de Meuron creation (a series of stacked gable-roofed structures housing Vitra’s flagship store, called VitraHaus) and the main museum building, designed by Frank Gehry in his exuberantly sculptural style. The latter hosts major temporary exhibitions, such as the current, comprehensive “Alexander Girard: A Designer’s Universe” (through January 22, 2017).

The permanent collection, however, didn’t have a public home commensurate with its significance until the Schaudepot opened in June.

The 17,000-square-foot, gable-roofed, brick Schaudepot spreads its displays, presented in a restrained re-envisioning of storeroom style, across two floors. On the ground floor — a bright space illuminated by fluorescent tubes arranged in a distinctive pattern — the centerpiece is a permanent exhibition of 400 key pieces from the collection. Organized chronologically, these selections offer a comprehensive overview of furniture innovations over the past 200 years. 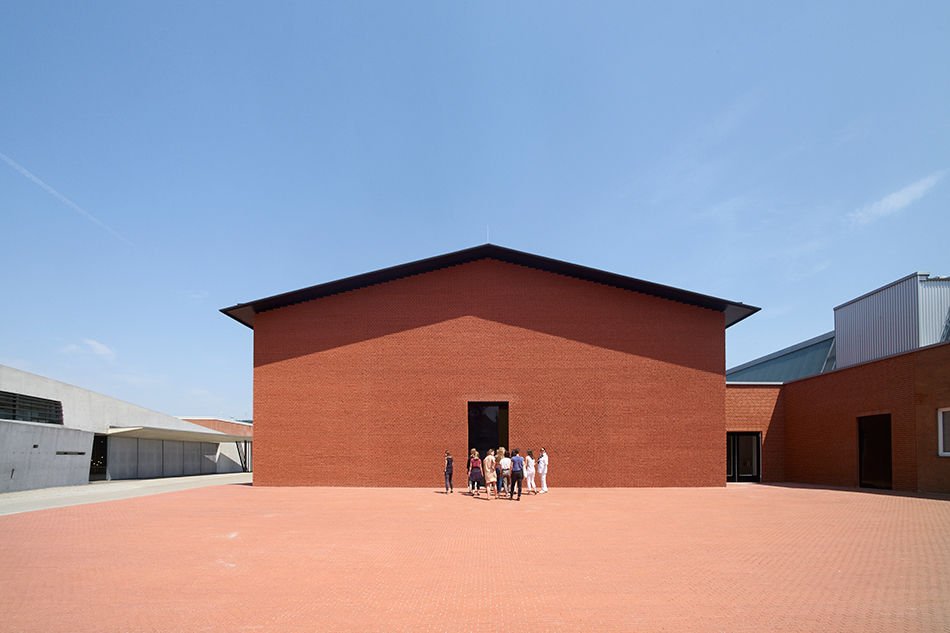 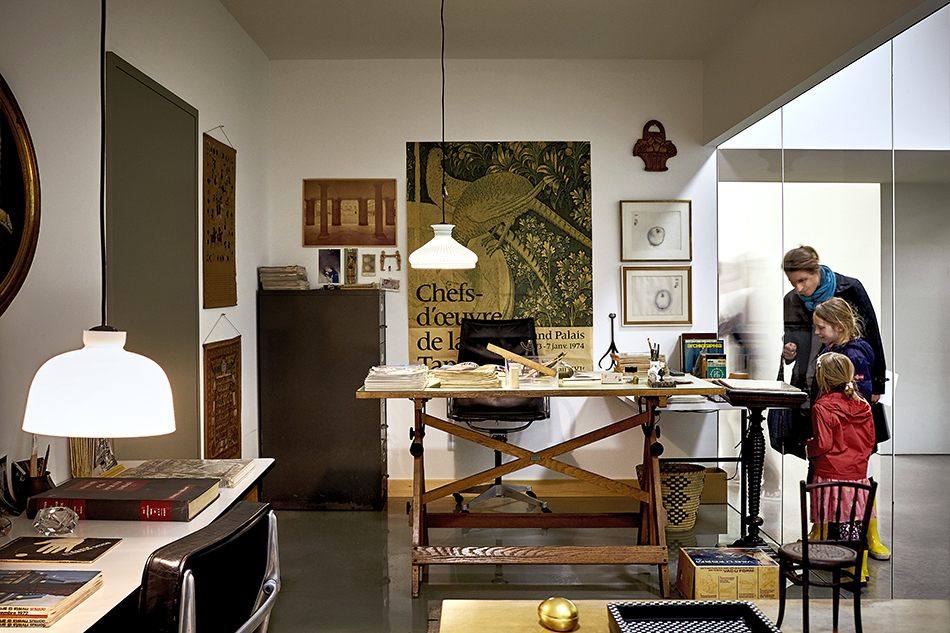 The lower level of the new gallery features a re-creation of the office of mid-century modern furniture designer Charles Eames, with original objects from his studio placed among furnishings from the space. 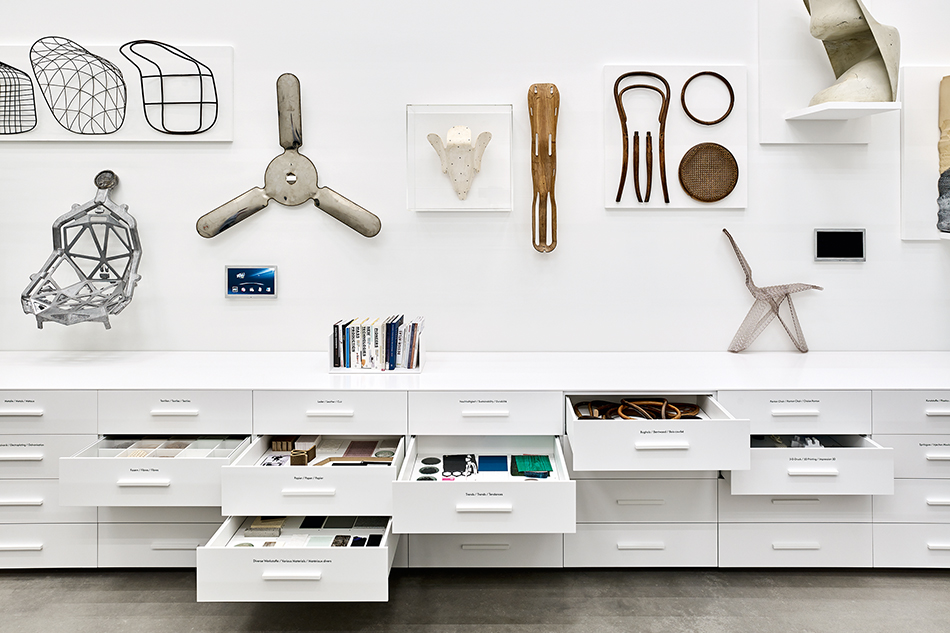 In addition to finished works, the displays include pieces that illustrate the process of designing, manufacturing and finishing furniture. 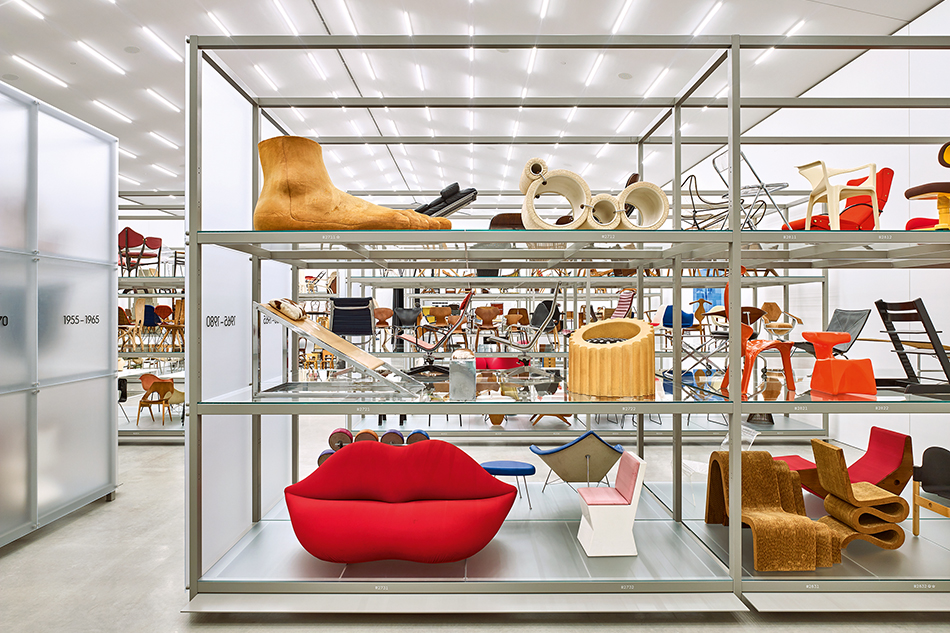 The racks contain such well-known pieces as the Lips sofa by Italy’s Studio 65 and cardboard seating by Frank Gehry. A nearby building by Gehry hosts the Vitra Design Museum‘s temporary exhibitions. Currently on view there through January 22, 2017, is a show devoted to Alexander Girard. 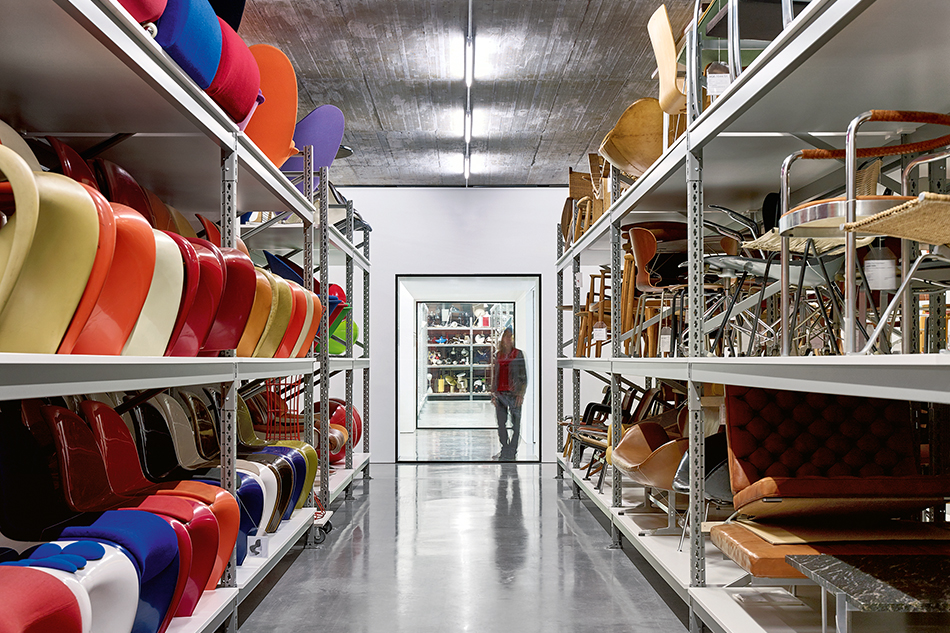 Taking a browse down one of the museum’s aisles might reveal a rainbow of molded plastic chairs by Panton on one side and a variety of mid-century wood, metal, leather and cane pieces on the other. 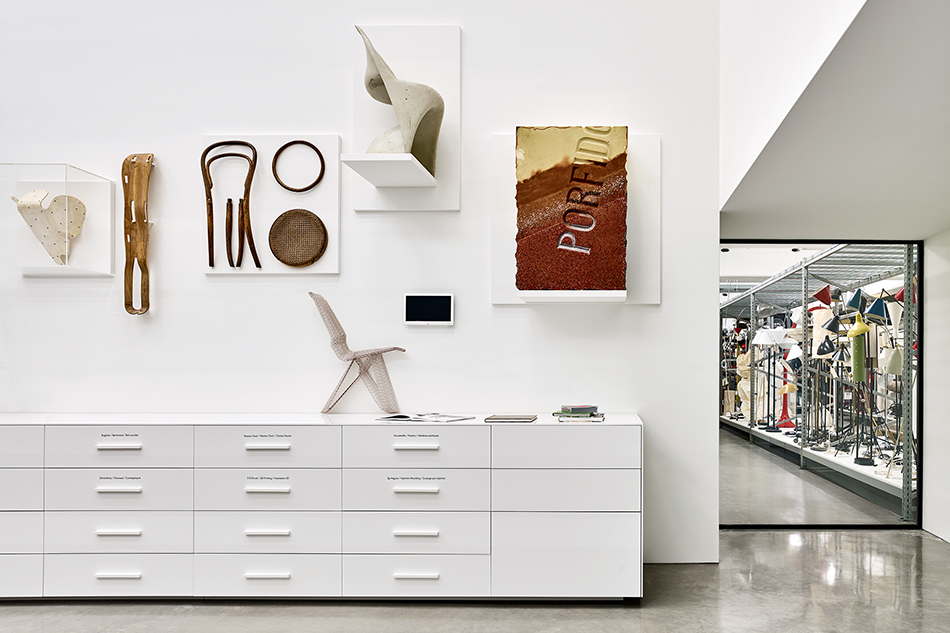 Beyond the process pieces is a display of Vitra’s extensive holdings of lighting. 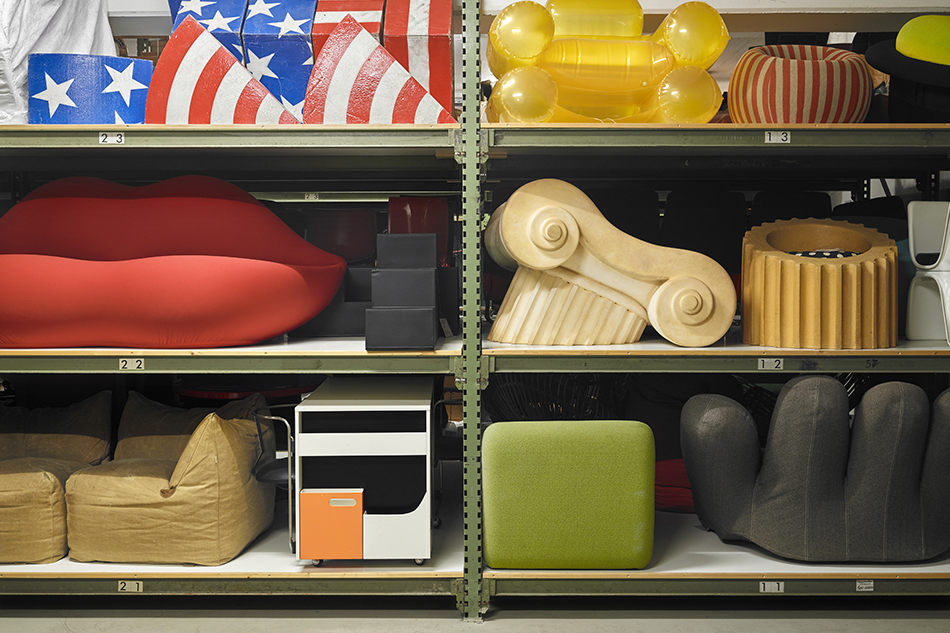 The Vitra holdings include Jonathan de Pas, Donato D’Urbino and Paolo Lomazzi‘s 1967 Blow Inflatable armchair for Zanotta (top center-right) and the same trio’s Joe lounge chair (bottom right), in the form of a baseball glove and named for Joe Dimaggio, created for Poltrona in 1971. The lips-shaped Bocca sofa is from 1970 and by Studio 65 for Gufram, while the camel-colored 1973 Le Bambole sofa just below it is by Mario Bellini for B&B Italia. 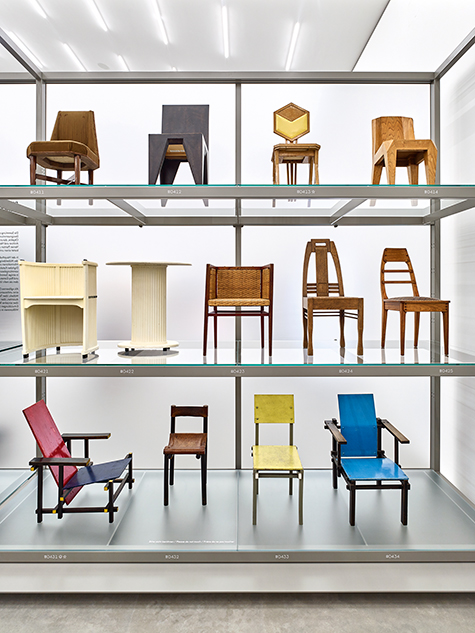 Chairs by Frank Lloyd Wright and Gerrit Rietveld are included in the two-century-spanning mix.

Featured pieces include late-19th-century furniture by Charles Rennie Mackintosh (“Exceptional because they are right at the intersection of nineteenth-century Art Nouveau and the modernist language dominated by the rectangle and rationalist aesthetics,” notes Kries); wavy creations by Italian modernist Carlo Mollino (“He used plywood in a spectacular way like no one did before”); and 36-year-old Joris Laarman’s Gradient chair (“The first chair 3-D-printed in aluminum and reflecting our interest in also purchasing outstanding achievements in contemporary design”). The ground floor also leaves room for smaller temporary exhibitions related to the collection. The first, on view through November 13, is dedicated to the “Radical Design” movement of the 1960s.

On the Schaudepot’s lower level, you can find pieces from the Eames estate, including a recently acquired plywood sculpture created by Ray in the early 1940s and, perhaps most interestingly, a reconstruction of Charles’s office, with original furnishings and objects. The Scandinavian design section here explores the holdings of Panton’s estate, while the Italian section features Memphis Group pieces and earlier postwar works by Giò Ponti, Studio 65 and others. Examples of extraordinary lighting, the second focal point of the collection, are also on display.

Furthering the goal of transparency, curators and conservators can be seen at work throughout the museum. Even the institution’s offices and the library are visible from the café, and guided tours provide access to the restoration workshop.

“We think that design concerns everybody, as everyone is surrounded by it and uses it,” Kries concludes. “There are few objects that are as close to us as furniture. So it made sense to create a unique place where we can explain their history, their influence on our lives, their backgrounds, as well as possible future evolutions of the interior and furniture.”