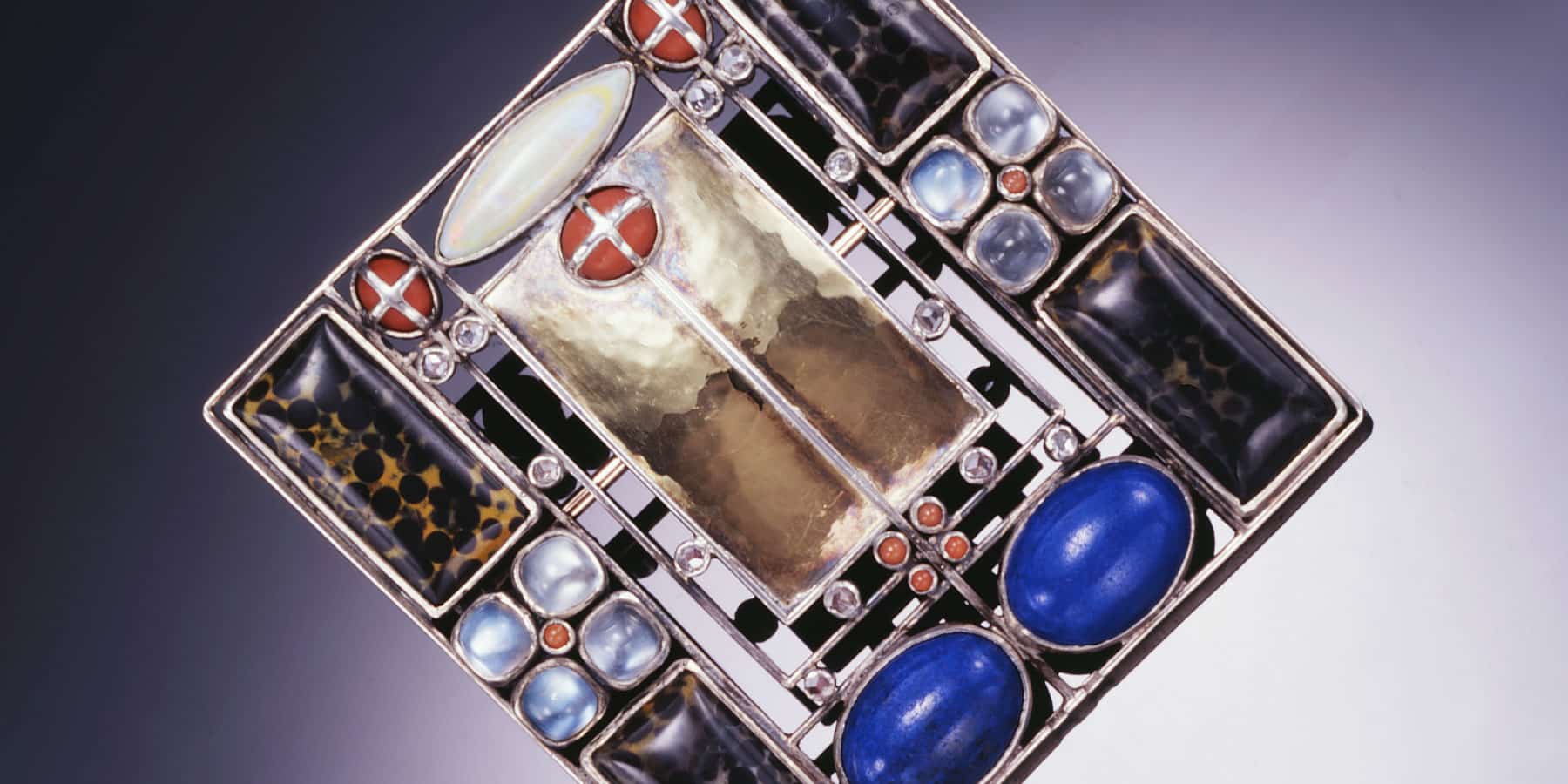 A blockbuster exhibition at New York's Neue Galerie sheds new light on a design company that took Vienna — and the world — by storm in the first decades of the 20th century. 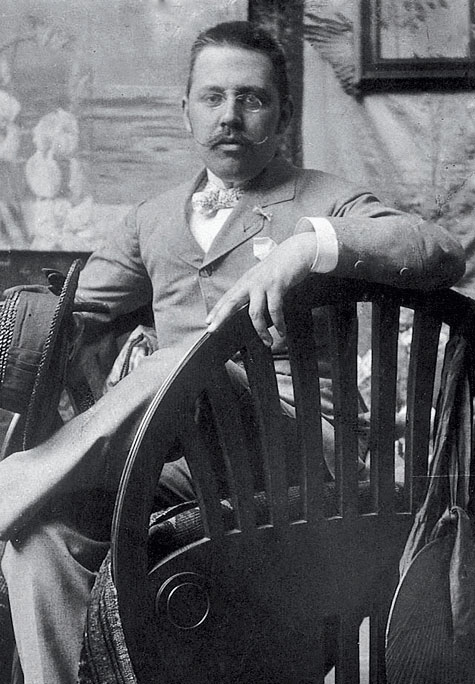 The Wiener Werkstätte, cofounded in Vienna in the first years of the 20th century by designer Josef Hoffmann (above), is currently the subject of a fascinating exhibition at New York’s Neue Galerie (photographer unknown). The show contains more than 400 objects created by members of this creative collective, including a precious- and semiprecious-stone brooch that Hoffmann designed in 1904 (top). All photos courtesy of Neue Galerie New York, unless otherwise noted

Design has seen a true flowering during the past 20 years due to several factors: digital advances that have made possible formerly impossible feats, a hungry market buoyed by unprecedented wealth and an increased recognition that this field deserves as much reverence and scholarly study as fine art.

But as design flowerings go, it’s hard to think of anything more profuse and splendid than the Wiener Werkstätte, the collective of Viennese artists and craftsmen that blossomed in the early 20th century, under very different conditions. Although the term today is used to refer to an entire aesthetic movement, it originally denoted just a single company.

And it was one that never, ever made a profit — but who cares? The Neue Galerie New York’s current blockbuster show, “Wiener Werkstätte, 1903–1932: The Luxury of Beauty,” demonstrates with every gleaming object on display that its output was truly priceless. The balance sheet can go to hell.

The exhibition, on view through January 29, was organized by Christian Witt-Dörring, the museum’s curator of decorative arts, and Janis Staggs, its curatorial director and manager of publications. Weighing in at a whopping 400 objects, it isn’t just worth a visit; it’s worth several, as you’ll need time to absorb all that beauty. The catalogue is a deluxe item in and of itself: nearly 600 exquisitely composed pages that chronicle the firm’s mastery of every medium, from silver (likely the enduring strong suit) to ceramics to glass, and nearly every design category, from furniture to jewelry, wallpaper to fashion. 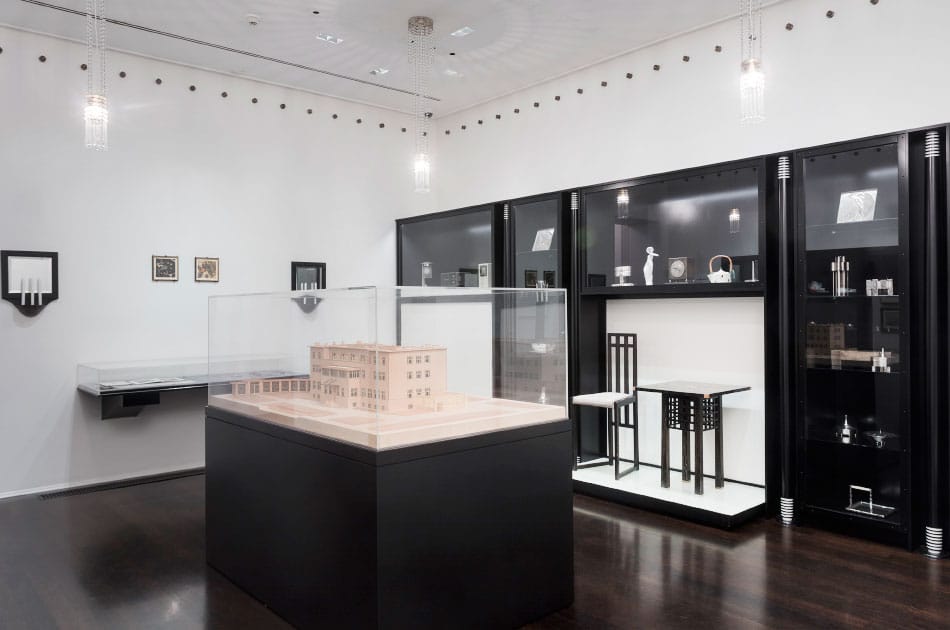 The first gallery in the exhibition, covering the founding years of the Wiener Werkstätte (1903–05), features a model of the Sanatorium Purkersdorf, at center, as well as a chair and table by Hoffmann, both from 1904, in a niche to the right. All photos in this slideshow by Hulya Kolabas for Neue Galerie New York 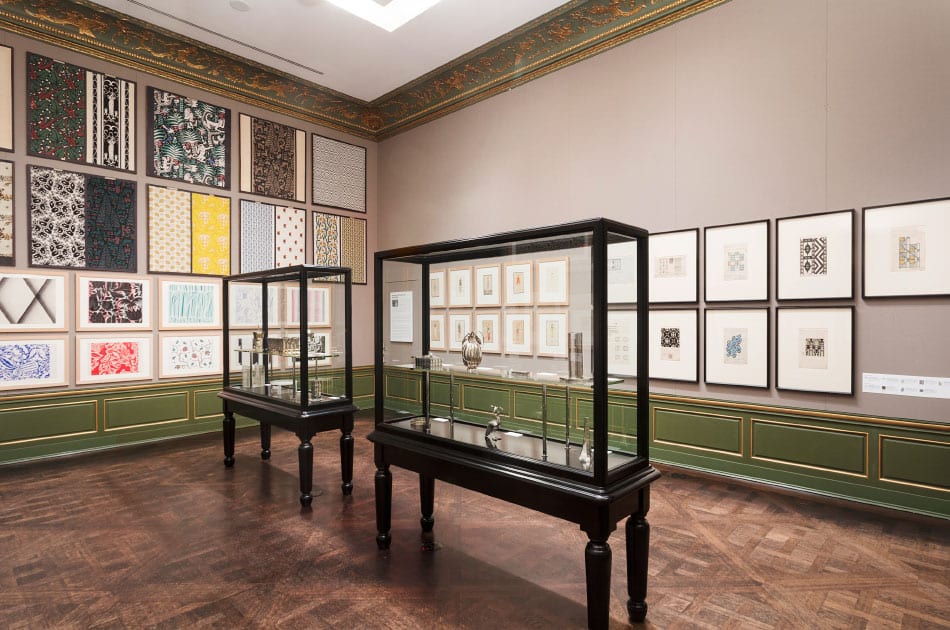 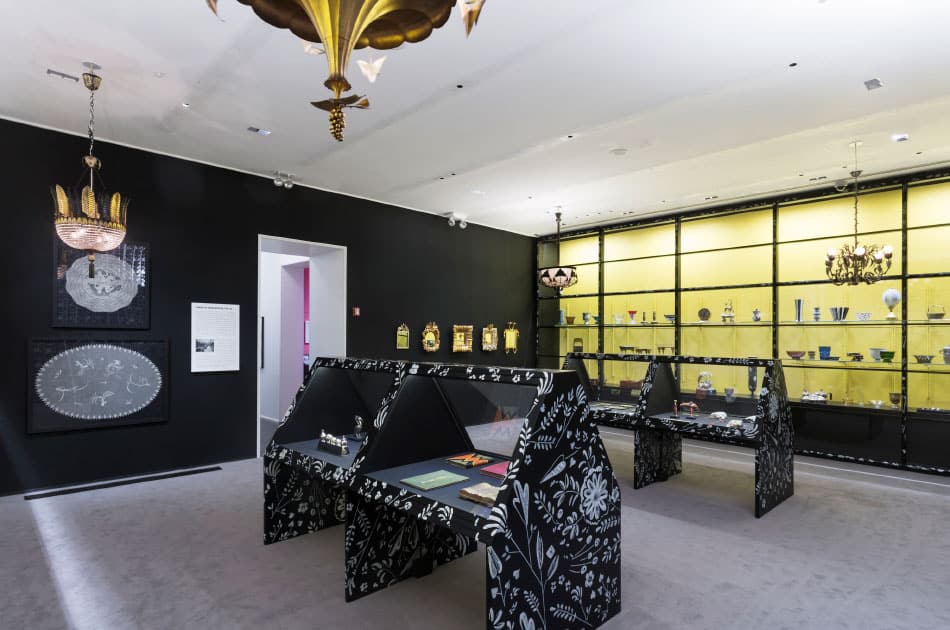 Hoffmann’s design for the Austrian Pavilion at the 1925 Art Deco show in Paris inspired the arrangement of the third gallery, titled “Years of Reinvention, 1915–32.” The chandeliers are by Hoffmann and Dagobert Peche, who also created the lace and framed mirrors along the back wall. 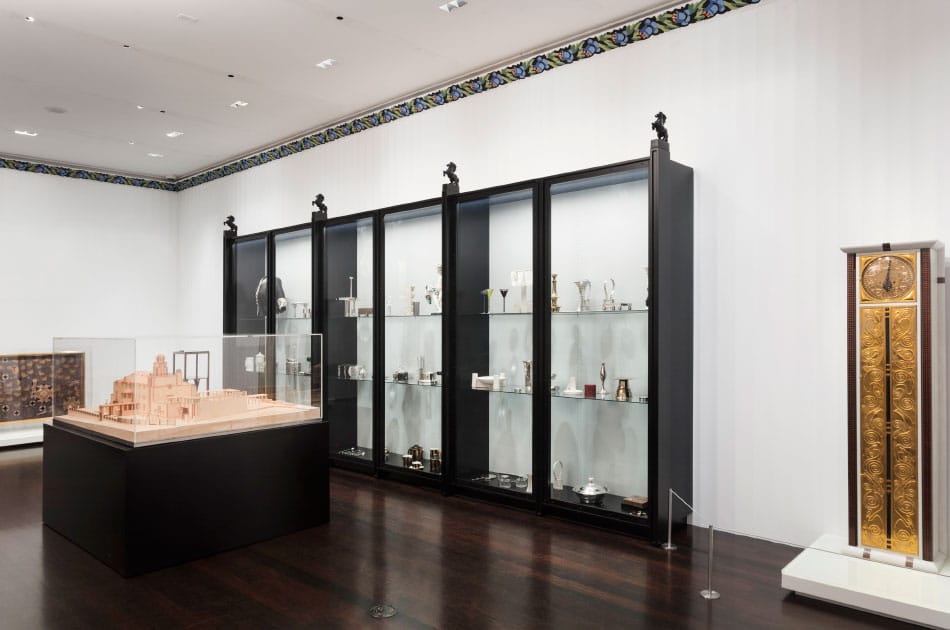 “Growth Years, 1906–14,” the second gallery, contains a model of the 1911 Palais Stoclet, in Brussels, which Hoffmann designed for banker and art lover Adolphe Stoclet. Such notable artists as Gustav Klimt and Carl Otto Czeschka contributed to the home’s interiors, whose furniture was all by the Wiener Werkstätte. 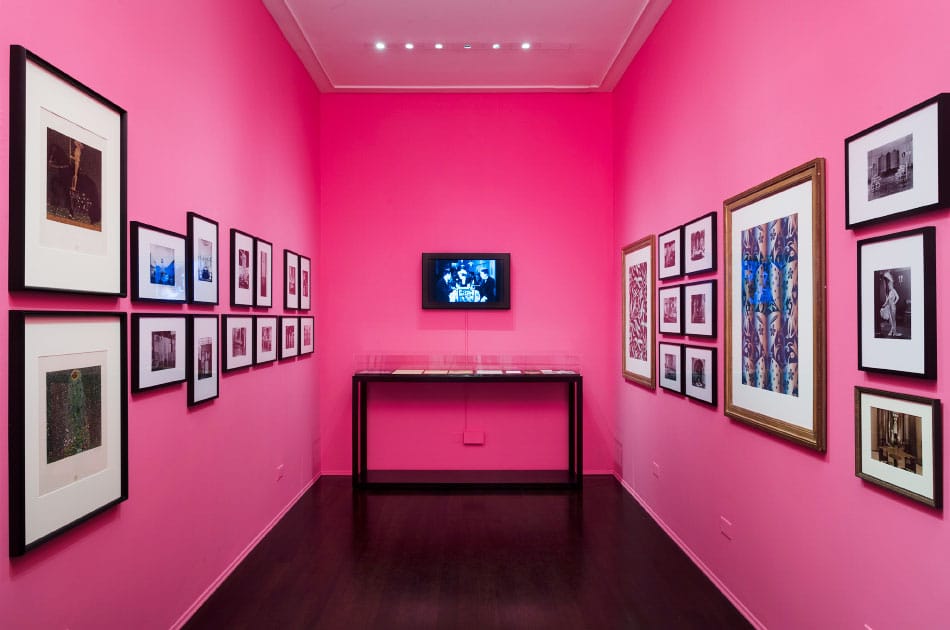 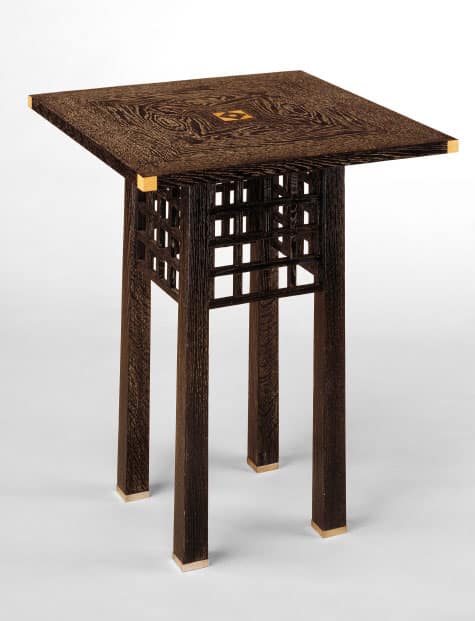 Hoffmann’s ebonized-oak table, also from 1904 and featured in the show, incorporates an inlay of boxwood and silver-plated mounts.

“I wanted to depict the Wiener Werkstätte as the lab for innovation and for tastemakers,” Witt-Dörring says. “This is the first show of such scale in America, and the only one to concentrate on the firm’s whole history.”

The Wiener Werkstätte (which means Viennese Workshops) was founded by the painter Koloman Moser; the architect Josef Hoffmann, the creative genius who became most closely associated with it; and the textile magnate Fritz Waerndorfer, who provided the money and then was promptly forgotten by history. (So that we don’t make the same mistake, we here mention that all blessings at the Neue Galerie flow from its über-patron and cofounder, Ronald Lauder.)

Like the members of England’s earlier Arts and Crafts movement, the artists involved in the Wiener Werkstätte wanted to return to a hand-tooled form of design, one that remained true to traditional methods, even in the face of the mass production enabled by the Industrial Revolution.

The Wiener Werkstätte was a splinter group of sorts from the Vienna Secession. Founded just six years earlier by such creative luminaries as Gustav Klimt, that movement focused on the fine arts and attempted to throw off hidebound rules of centuries past. The existence of these two groups at the same time is further proof of the oft-made assertion — evidenced as well by creative and innovative activities of Sigmund Freud, Gustav Mahler and so many other artists and intellectuals — that the turn of the 20th century in Vienna was a truly fecund cultural moment. 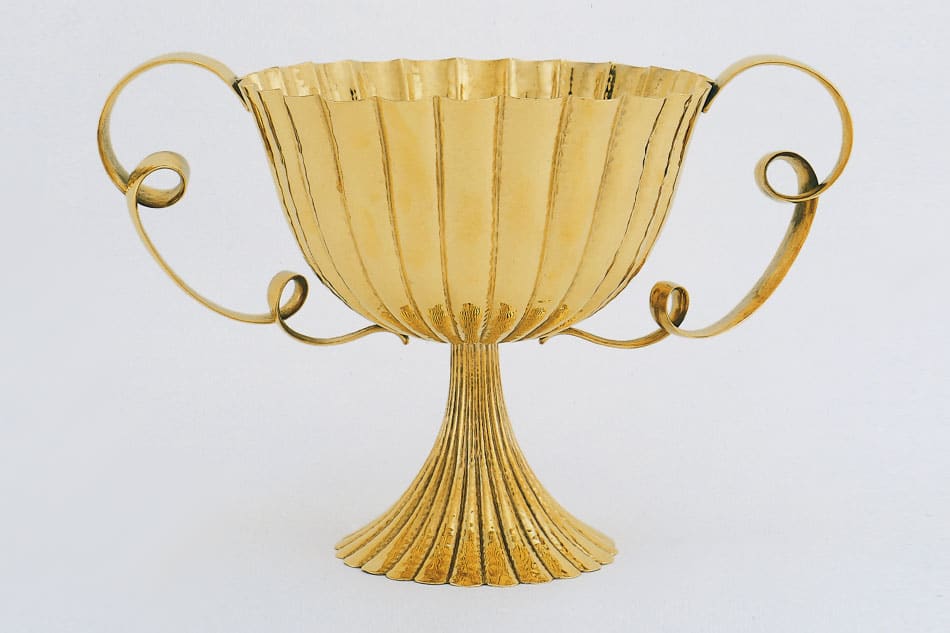 A 1924 brass centerpiece by Hoffmann with two ribbon-like handles rises gracefully from a tapered, fluted base. 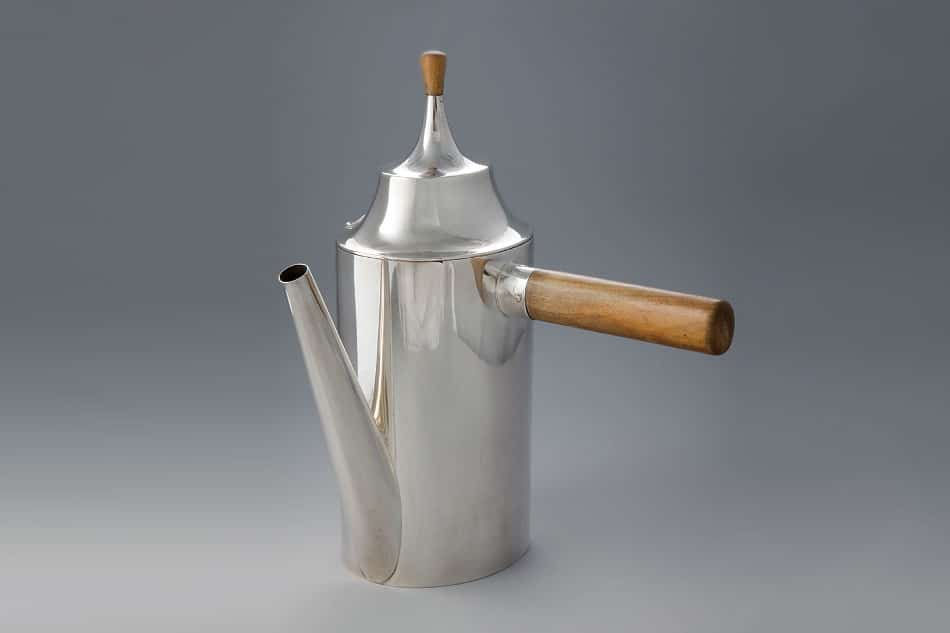 The curators of the Neue Galerie show borrowed this silver and snakewood coffeepot by Hoffmann from a private collector. 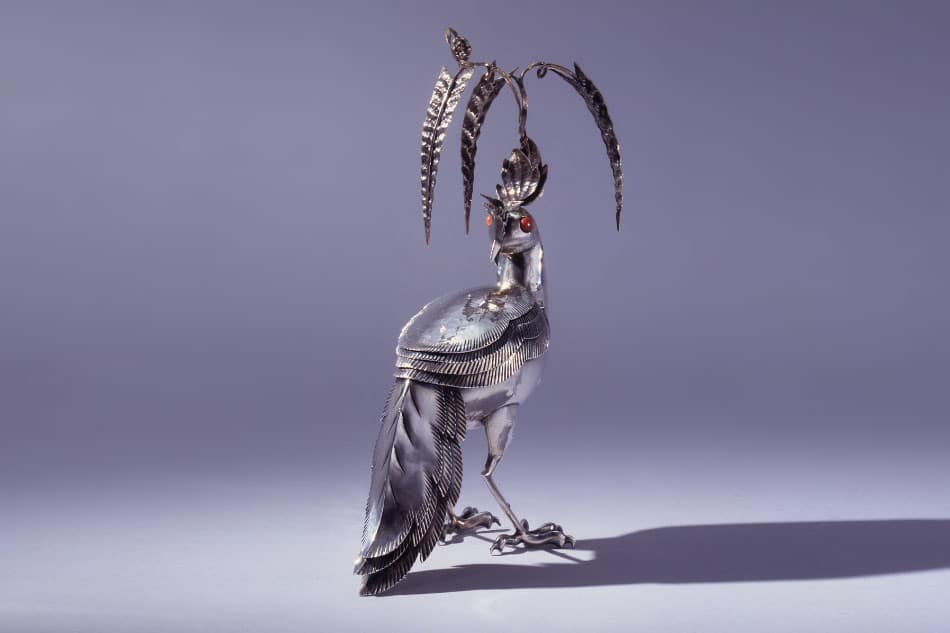 A 1920 bird-shaped candy box by Dagobert Peche shows off the Wiener Werkstätte’s more whimsical side. 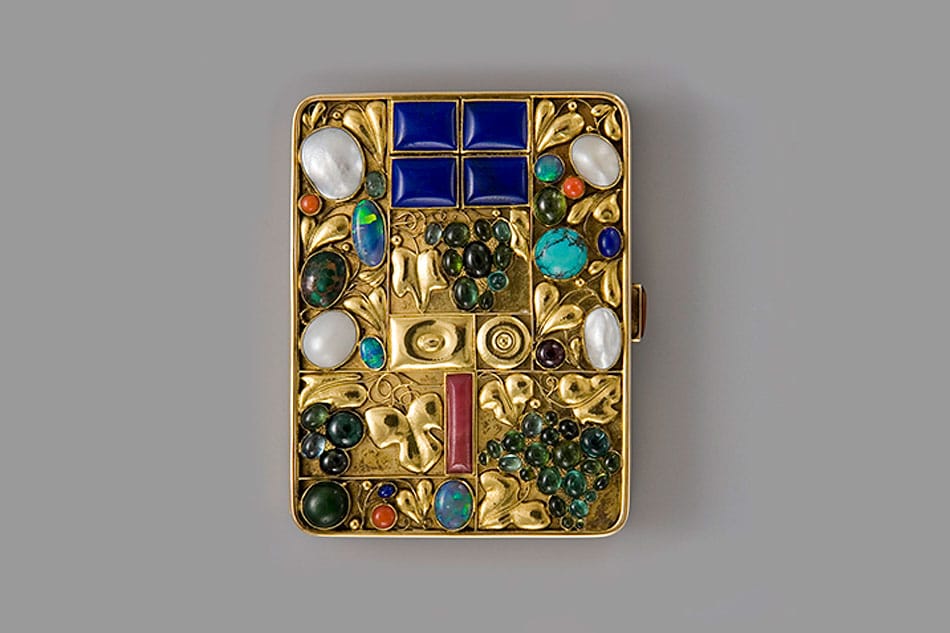 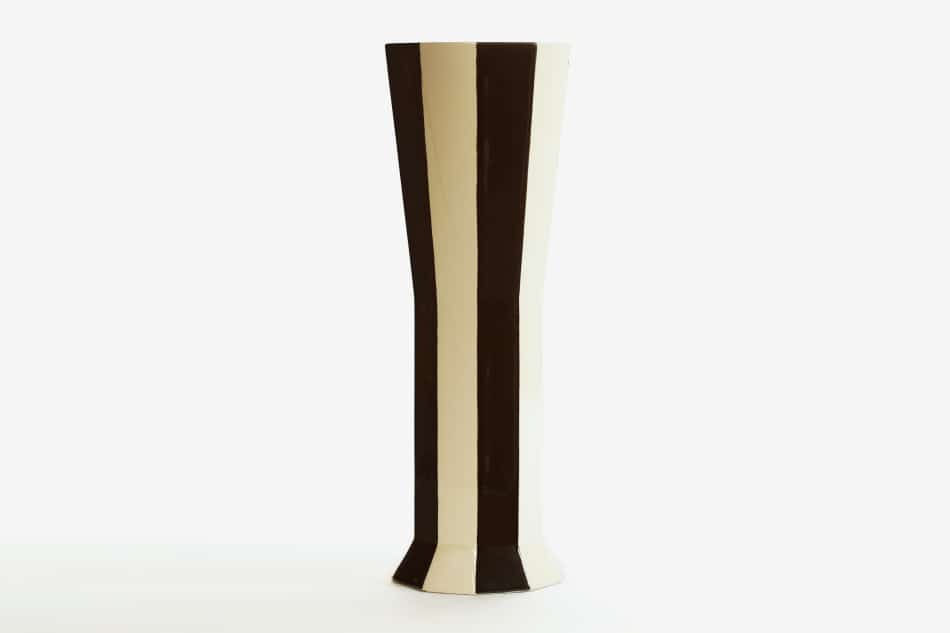 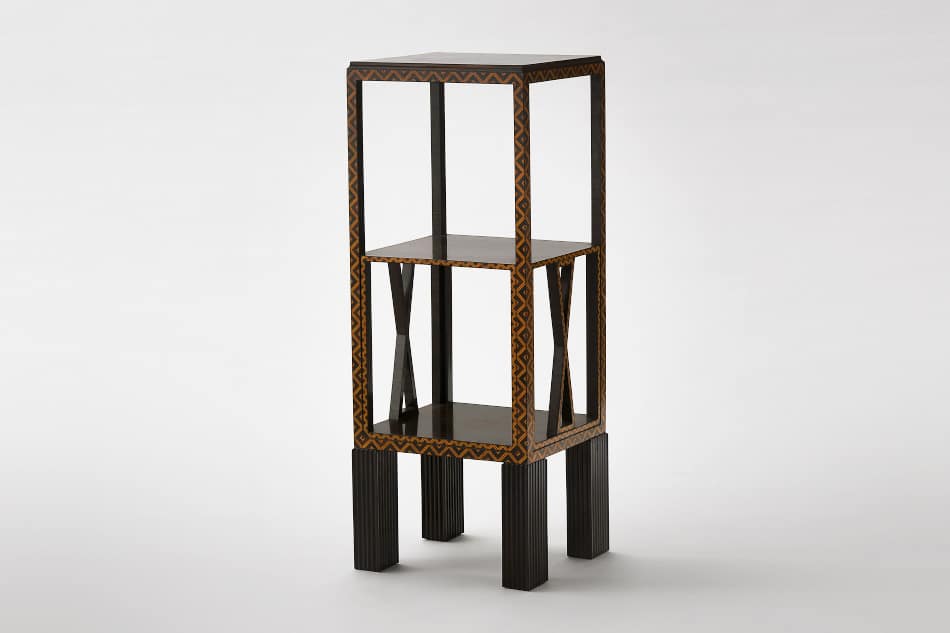 Hoffmann created this étagère for the hall of Villa Ast, the home he designed for the Viennese building contractor Eduard Ast around 1910. 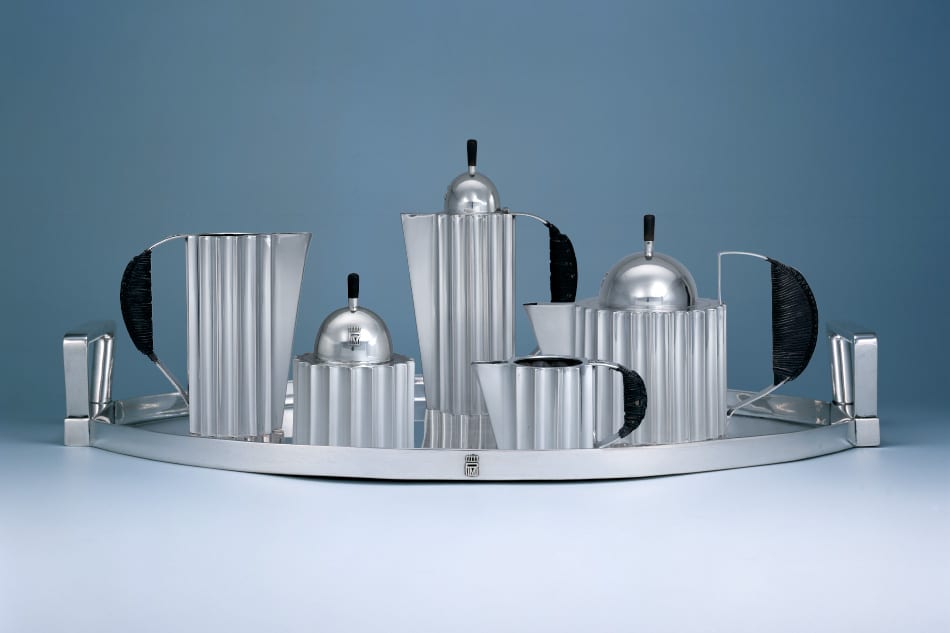 Hoffmann rendered this tea and coffee service from 1904 in silver and ebony. 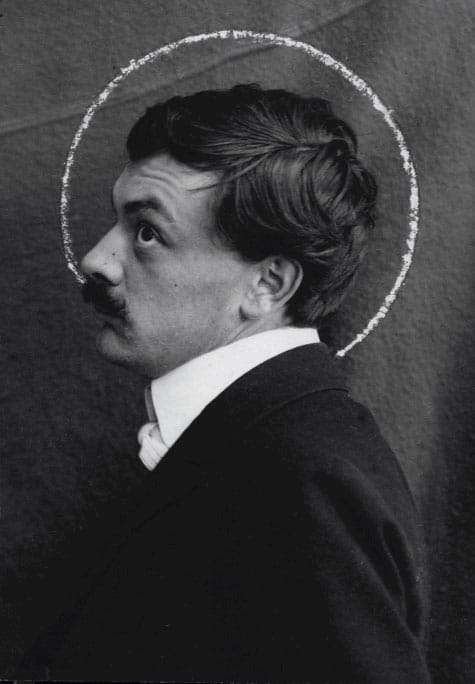 Witt-Dörring endeavored to represent all chapters of the Wiener Werkstätte’s history. “The early production has always been prized by the market,” he says. “So, I put a lot of emphasis on the show’s last room, where the later pieces are.” There we see the more fanciful designs of Dagobert Peche, who trained as an architect but is now famed for such fanciful objets as a 1920 gilt-silver jewel box topped by the figure of a frolicking deer.

The earliest designs were geometric and had fewer frills. Hoffmann’s flower basket (1906–13), for example, looks more like a model for a skyscraper than a holder for peonies. Made of metal with tiny square-shaped perforations, it has a toweringly tall handle atop its tall rectangular body.

“In the beginning, they felt they had to fight classicism and pastiche and throw out all the old styles,” says Witt-Dörring. “Once they had an international reputation, they didn’t have to be as provocative anymore, and so those later pieces have slightly more classicism.”

The second half of the movement’s existence coincided with the advent of the more austere — and, ultimately, much more famous — Bauhaus. “In their abstraction and use of geometric shapes, they were similar,” says Witt-Dörring. “But unlike the Bauhaus, Wiener Werkstätte is not about industrial methods and mass production.”

With their intellectual rigor and drop-dead beauty, the Wiener Werkstätte’s creations now seem like glorious anomalies. As Witt-Dörring puts it, “Someone once said, Vienna circa 1900 is the only culture that could create the perfect harmony between the rational and emotional.” Both your head and your heart will be fully engaged by this show. 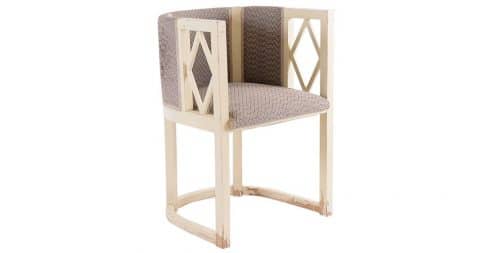 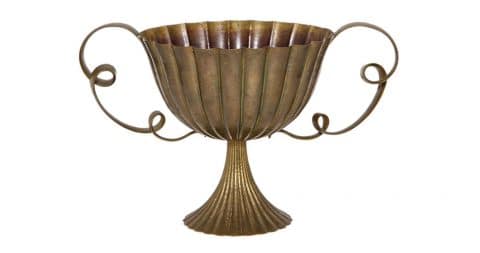 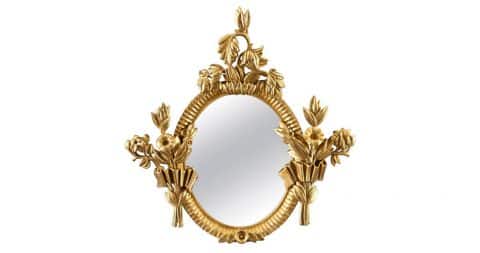 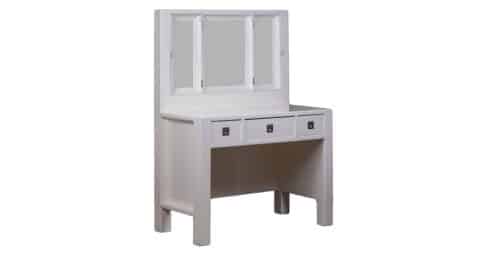 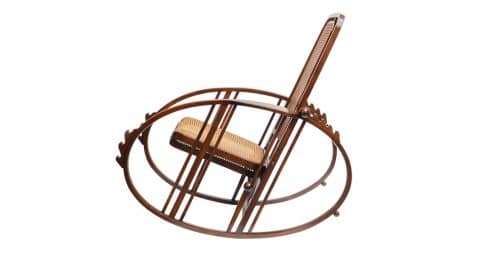 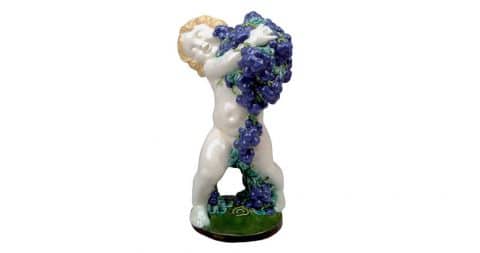 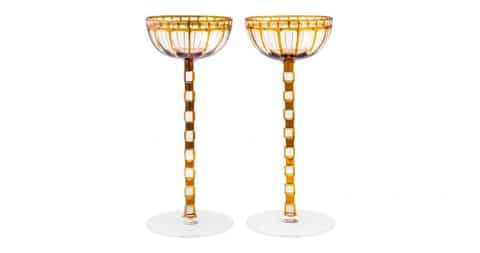