The trio behind the burgeoning Brooklyn design firm Workstead has suddenly found themselves very much in demand, thanks in no small part to their scheme for Williamsburg's hip Wythe hotel, which, like many of their projects, eschews the borough's popular Prohibition-era aesthetic for a certain casual luxury that's long on rich materials and modern forms. 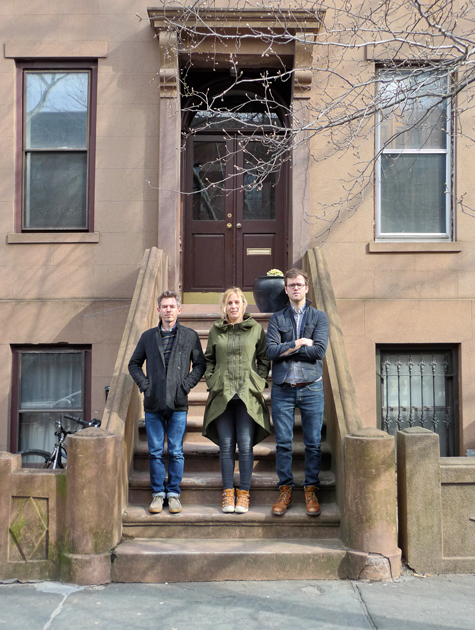 On a recent late-winter morning, an uncommon calm hung pleasantly over the Wythe Hotel, in Williamsburg, Brooklyn. As the unofficial clubhouse of what is probably the trendiest neighborhood in arguably the world’s coolest city, the Wythe is normally engulfed in a maelstrom of activity: Travelers and locals alike constantly orbit from lobby to guestroom to restaurant to bar, merrily trying to get closer to the elusive center of it all. Just not before 11 AM, apparently, when much of the creative community, and presumably the hotel’s paying guests, too, are all still snoozing.

The building’s origins as a 1901 cooperage endow it with soaring ceilings and attractive bones, and upstairs, the rooftop Ides bar is wrapped in the kind of skyline views not found anywhere else in Brooklyn (or Manhattan, for that matter). Yet it’s a quieter feature that ranks among the Wythe’s most impressive: the front door. And it’s this door — framed in metal, and, improbably, curved to fit the rounded contours of the unique corner entrance — that says the most about Workstead, the design firm that created the hotel’s public spaces.

“We fought for that door,” says Stefanie Brechbueler, who, together with her husband, Robert Andrew Highsmith, and their fellow Rhode Island School of Design (RISD) alumnus Ryan Mahoney, comprise the four-year-old Brooklyn-based firm. The Wythe, completed in 2012, was their first commercial project and undoubtedly a watershed job. It’s granted the trio a deluge of positive exposure and the privilege of now being able to turn down projects that don’t feel 100 percent right — they aren’t exactly wanting for offers.

Yet as it happens, they turned down jobs even before they broke out with the Wythe, which stands to reason given the strong sense of integrity they exude, the feeling that they stick to their design guns no matter what. “We’ve gotten very lucky with the opportunities we’ve had, but you also have to be careful with the kind of work you put out there,” says Brechbueler. “If you just take anything…” she trails off. “We want to be proud of the work we do,” finishes Mahoney. “To turn any project down when you’re only three years old, sometimes that’s risky,” concludes Highsmith, “but so far it’s worked out.” 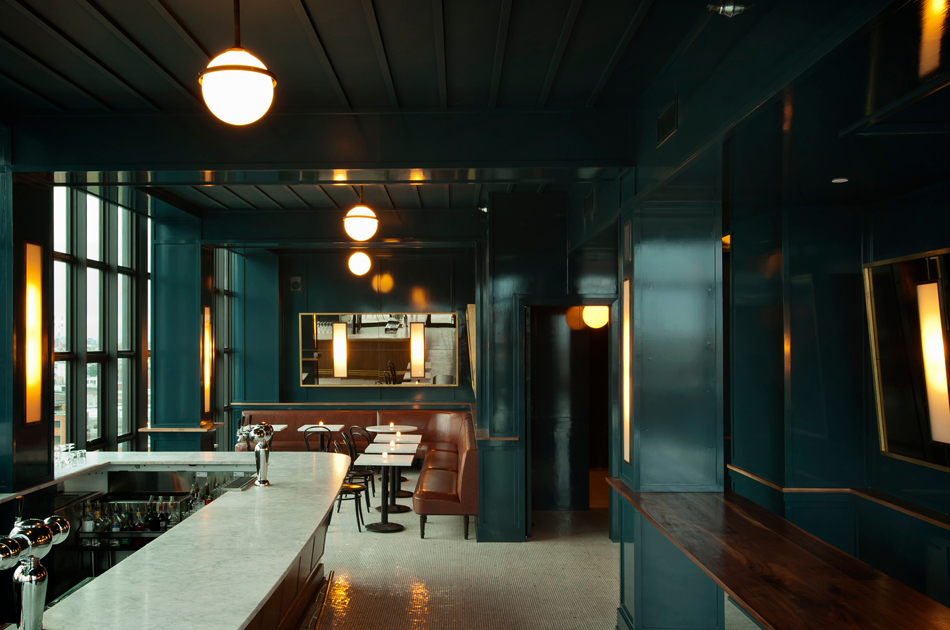 The green-blue-gray tones of the glossy color — Farrow & Ball’s Hague Blue — Workstead chose for the Wyeth’s Ides bar subtly shift with the natural light that pours through the rooftop space’s wall of windows.

One of the reasons Workstead can afford to be choosy about projects is that like many young creative firms these days — and certainly ones formed during the recession — it isn’t a one-trick pony. In addition to residential and architectural design, they produce a line of lighting fixtures of Highsmith’s own design, both premade and customizable. Though industrial and spare in appearance, the fixtures work in many settings: They hang in the Levi’s flagship store in Tokyo, the Facebook offices in Silicon Valley, the Barney’s Co-Op in Brooklyn, the clothing store Totokaelo in Seattle and in the homes of author and photographer Kelly Klein and director Darren Aronofsky.

“We are allergic to fake vintage.” 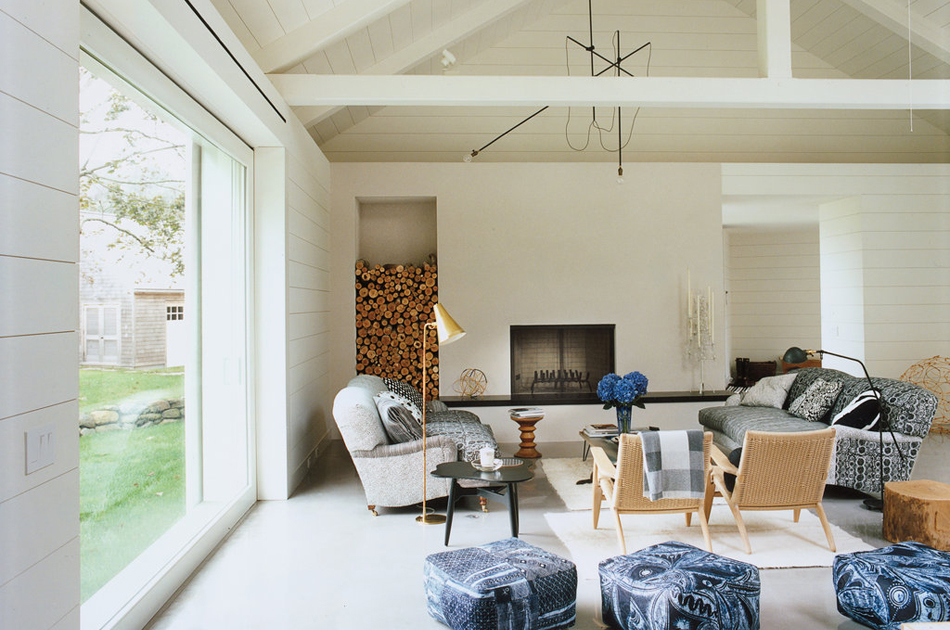 In addition to interiors, Workstead creates premade and customizable light fixtures constructed largely of cast iron, steel and brass, one of which hangs in this home in Bridgehampton, New York.

This versatility is true of Workstead’s practice as a whole. In addition to a handful of New York residences, they’re currently also working on a bakery in Tribeca and a hair salon housed in a former brothel in Tulsa, Oklahoma. Though they’re reluctant to pigeonhole their aesthetic, a common thread through their project is a kind of casual luxury, one born out of a combination of rich materials and modern forms. In the Wyeth’s Ides bar, for example, they sought to make everyone — from the suits to the scruffy-faced — feel at home, incorporating burnished brass that looks rough-hewn one minute and glitters in the sunset the next. In their early work they often avoided pigment but lately have been dipping into “fields of color,” says Highsmith, creating an all-green kitchen in Chelsea and bathing the walls of the Ides bar in Farrow & Ball’s high-gloss Hague Blue.

And while it’s true that they’re based in Brooklyn (Cobble Hill), and even though they use vintage and salvaged material, Workstead would like it to be known that they are not practitioners of that near-ubiquitous Prohibition-era, Ye-Olde-Brooklyn style. “We’re not interested in creating spaces that look old, even though we respond to a lot of materials that feel time-tested and durable,” says Highsmith. “We appreciate the contrast between the old and the new too much.” Or as Brechbueler puts it: “We are allergic to fake vintage.” 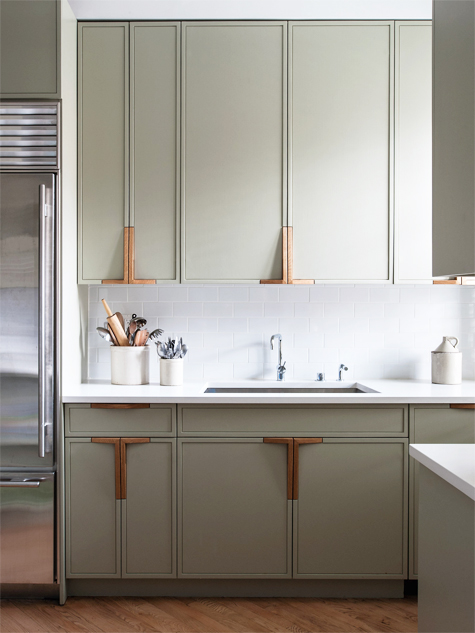 In this Park Slope kitchen, the plumbing fixtures are by Vola, and the cabinet faces are painted in Farrow & Ball’s French Gray; the firm designed the handles to pick up the color of the wood floors.

Highsmith: Stefanie and I started the company at the height of the recession. She was ready to move on from her corporate Midtown job, and I had just graduated from RISD. At the time, I was working freelance full-time on a pool house in Bridgehampton, so she jumped in full steam, and I joined her a year later. Our first project was a small kitchen in a Brooklyn Heights pre-war building.

Tod Williams, Billie Tsien, Peter Zumthor and Gion Caminada. Our influences are more our architectural idols; the studio is currently doing a lot of work with interiors, but we’re also in the process of becoming a licensed architectural firm.

The Wythe Hotel, completed last year. It’s Williamsburg’s first boutique hotel, housed in a former cooperage from the early 20th century. The building is beautiful, and the team that transformed it into a hotel included Morris Adjmi (architect), Jed Walentas (of the Two Trees development company), Peter Lawrence (hotelier) and Andrew Tarlow (restaurateur). We designed the lobby, terraces and bar. 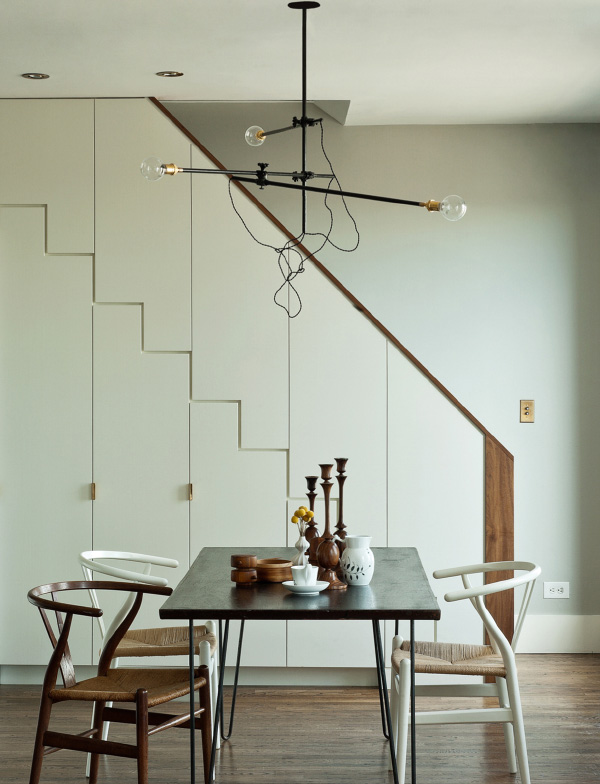 At a residence near Brooklyn’s Prospect Park, a staircase conceals kitchen cabinets and a refrigerator. Hans Wegner chairs surround the vintage hairpin table.

We work very collaboratively. We all studied architecture at RISD, so we have similar sensibilities and understand the value of process — giving things time to develop, listening to your intuition and always striving for authenticity. We approach each project with a lot of attention to context. Context is key to our work.

Most recently, we loved staying at the Wentworth Mansion, in Charleston, for a mid-winter break.

Vinegar Hill House, in Brooklyn, and Reynard, at the Wythe

Favorite Place in Your Home

The quirky greenhouse in our attic apartment in Brooklyn during the winter and, during the summer, the deck at our Hudson Valley cottage