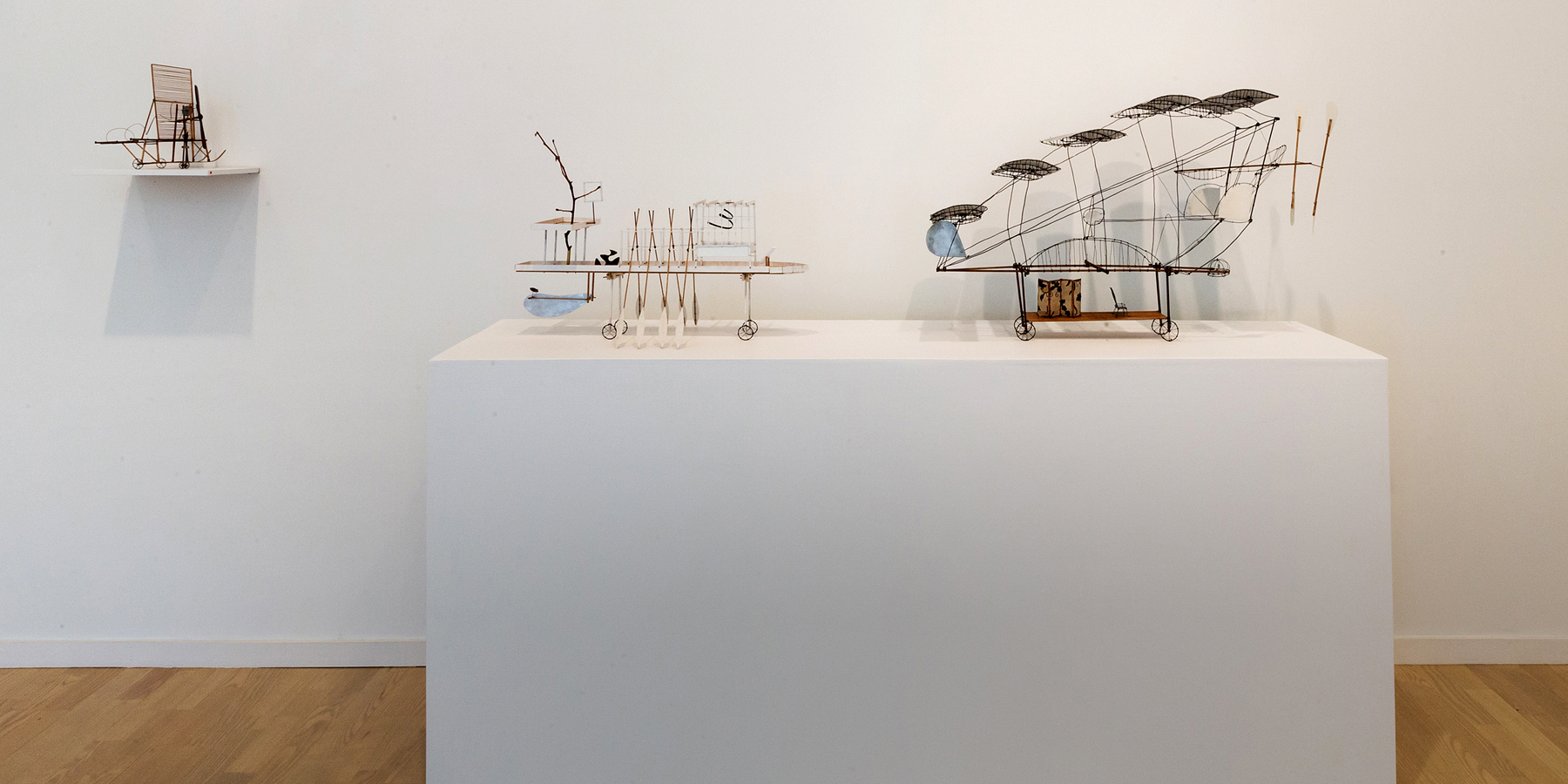 A current show at the Drawing Center, in East Hampton, celebrates the delightful new sculptures of Adrian Nivola — an artist better known for his realist canvases — spotlighting his meticulously made creations inspired by the earliest days of aviation. 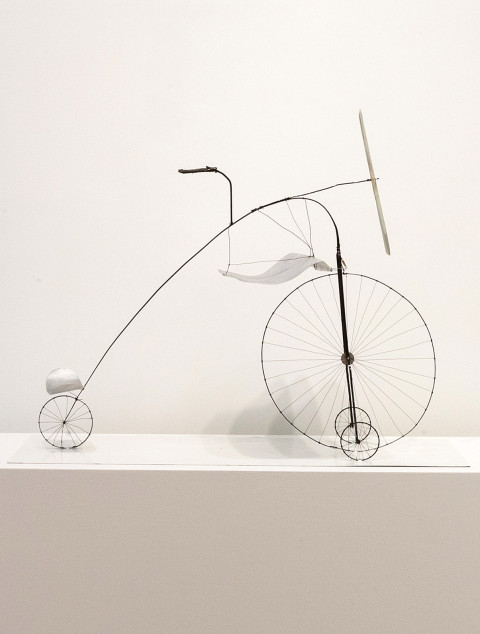 August 3, 2014Adrian Nivola’s current show at the Drawing Room in East Hampton, New York, consists of sculptures inspired by early aviation models, including Homage to Debayeux, 2014. Top: Left to right, Homage to Horatio Phillips, 2014; Homage to Octave Chanute, 2014; and Flyer for a Retired Samurai, 2014. All photos by Jenny Gorman

Those who make it out to East Hampton, New York, to see Adrian Nivola’s exhibition (on view through August 31) at the Drawing Room may be surprised to learn that it’s the artist’s first solo show. The sculptures — 24 carefully constructed objects inspired by 19th-century experiments in aviation — manage to balance elegance and whimsy, formalism and craftsmanship, with the kind of sophistication one expects from a seasoned art star.

Using wire, bits of fabric and wood and whatever other little found items strike his fancy, Nivola builds extraordinary, highly structured contraptions that bring to mind a cross between Buckminster Fuller and Alexander Calder. The artist, in fact, cites Calder’s Circus, as well as British sculptor Anthony Caro and legendary New Yorker illustrator Saul Steinberg, as influences, although he’s most inspired, he says, by the optimism and imagination of the early aviators who experimented with flight before the Wright brothers figured it out. “At the time, flight was considered as crazy as time travel,” says Nivola. “Their design decisions had nothing to do with the science of flight, so they all had these misguided ideas that have tremendous expressive power.”

Most of the pieces represent the work of would-be aviators and their perhaps-misguided engineering aspirations: Evoking a train car, Homage to Octave Chanute (1832-1910), 2014, honors a French-born American railroad engineer and pioneering aviator, while Homage to Horatio Phillips (1845–1924), 2014, was inspired by the British aviator known for his “stacked wing” planes. It includes a dollhouse-like wood-frame structure made from tiny sticks stacked horizontally. Some works are more general in their appreciation, such as Flyer for a Retired Samurai, 2014, which incorporates a tiny chair and Japanese folding screen set below sail-like silk “wings” and oar-like propellers. “For an artist like Adrian, who’s engaged in the making of objects,” says the Drawing Room’s co-founder Victoria Munroe, “the innovation and daring of the early aviators who imagined and built imperfect flying machines especially resonates.” 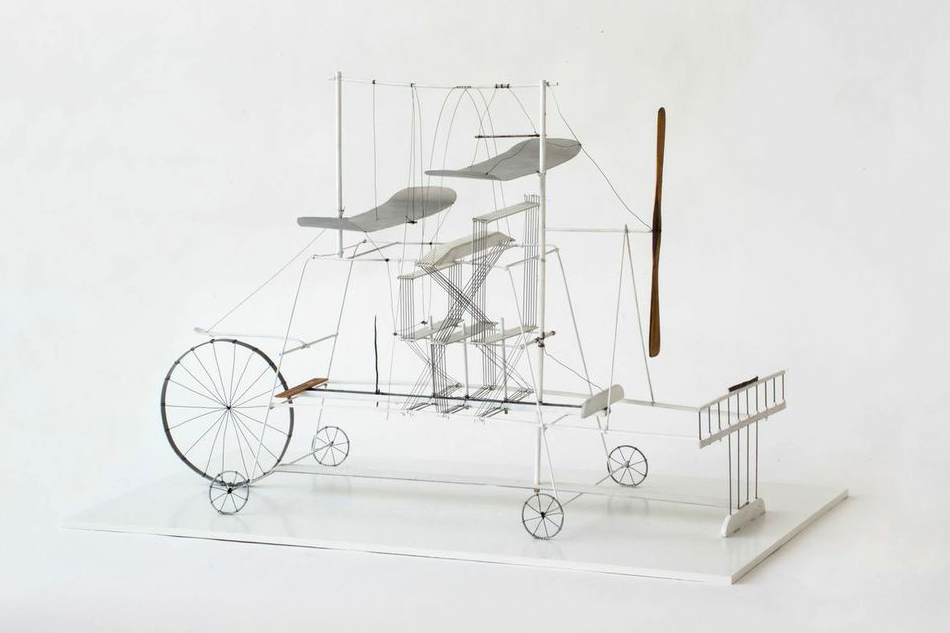 Like many of his works, Nivola’s Homage to Joachim Sumovski, 2014, pays tribute to the creator of an attempted-aviation device that predates the Wright brothers. 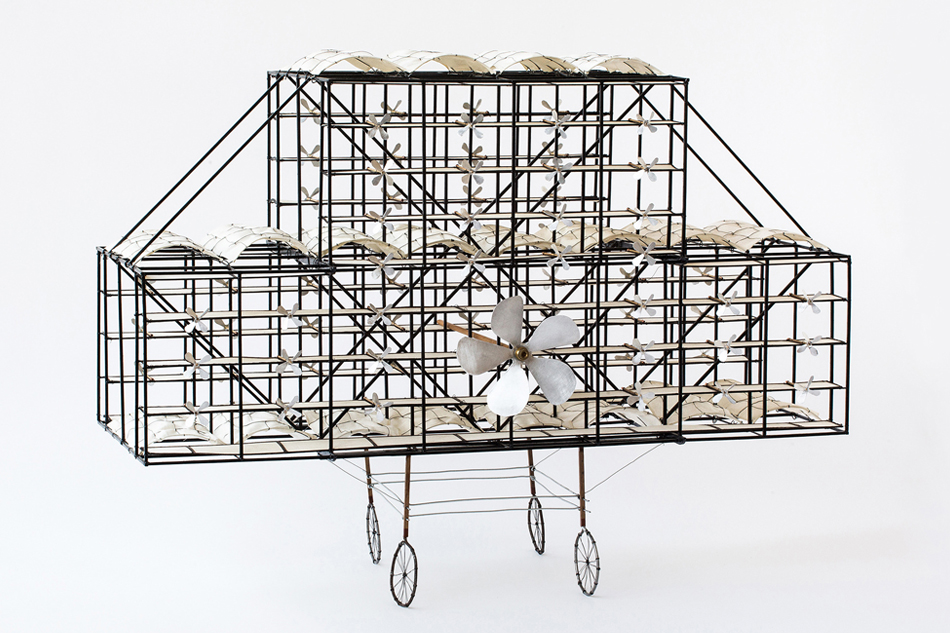 Flyer for a Dangerous Romp with JW’s Sweetheart, 2014, is one of 24 sculptures featured in this solo show – Nivola’s first – on view through August. 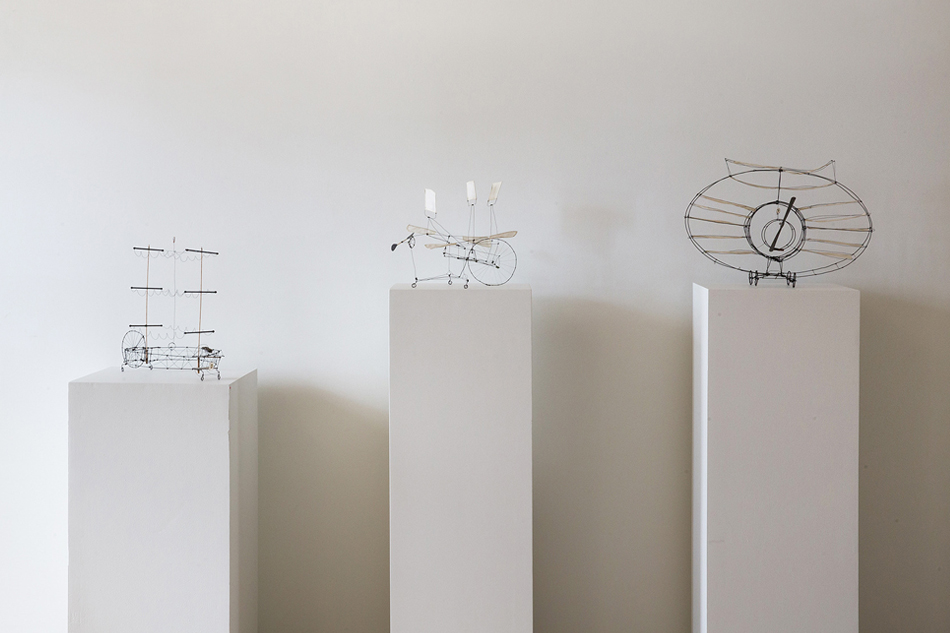 Despite a lifelong fear of flying, Nivola creates highly detailed works that showcase a thorough knowledge of aviation history. From left: Circus Flyer, 2014; Homage to Giacomo d’Angelis, 2014; and Rondo 9, 2014 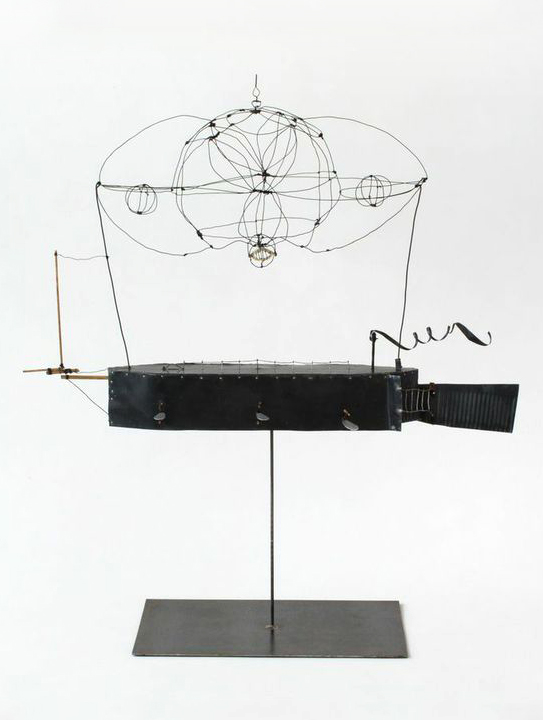 Nivola’s sculptures, including Airship for Santos-Dumont (1873-1921), 2014, are made of simple materials such as wire, string and sheet metal.

“I really want viewers to be able to project themselves into the world of the sculpture, as though you could shrink yourself and know what it’s like to be in them,” says the 36-year-old artist, who works out of a studio in Bushwick, Brooklyn. Far more than machines, they are like little characters created by the artist, and each is an expert study in composition and form. Nivola has an intuitive eye for geometry, and each line and plane is strategically placed for maximum balance and proportion. He doesn’t draw the sculptures before he creates them, but they do have a highly linear, drawn feel, as though he has somehow merged the two and the three dimensional.

Considering his understanding of the two-dimensional picture plane, it’s not surprising that Nivola is, in fact, better known for his paintings, which have been the focus of his career until now. He studied painting at Yale and the New York Studio School, and he has shown his painterly realist canvases — think John Singer Sargent — in group shows over the years. But he has also long been interested in the machines invented at the turn of the previous century. “They embody,” he says, “a spirit of serious play, humor and joie de vivre, which I find especially appealing.”

That appreciation for the joyful comes largely from his childhood, when he spent summers on Long Island’s East End, in the aura of his artistic grandparents, sculptor Costantino Nivola and art-jewelry maker Ruth Nivola, who were among the members of an artists’ community in Springs, a hamlet in East Hampton, that first formed in the 1940s. Costantino, an Italian émigré who collaborated with Le Corbusier, Marcel Breuer and Eero Saarinen throughout his life, was known, in particular, for his murals rendered in clay, cement, sand and bronze. (His estate is also represented by the Drawing Room.) Ruth, meanwhile, was famous for her extraordinary taste. “They knew how to create these amazing spaces, both inside and out,” says Nivola, who fondly reflects on his grandfather’s art-making lifestyle: “I loved that he woke up and headed to the studio to play with different materials all day. He was very playful in his studio. It always reminds me of the kind of freedom that’s necessary to feel when you’re working, to not take yourself too seriously.”