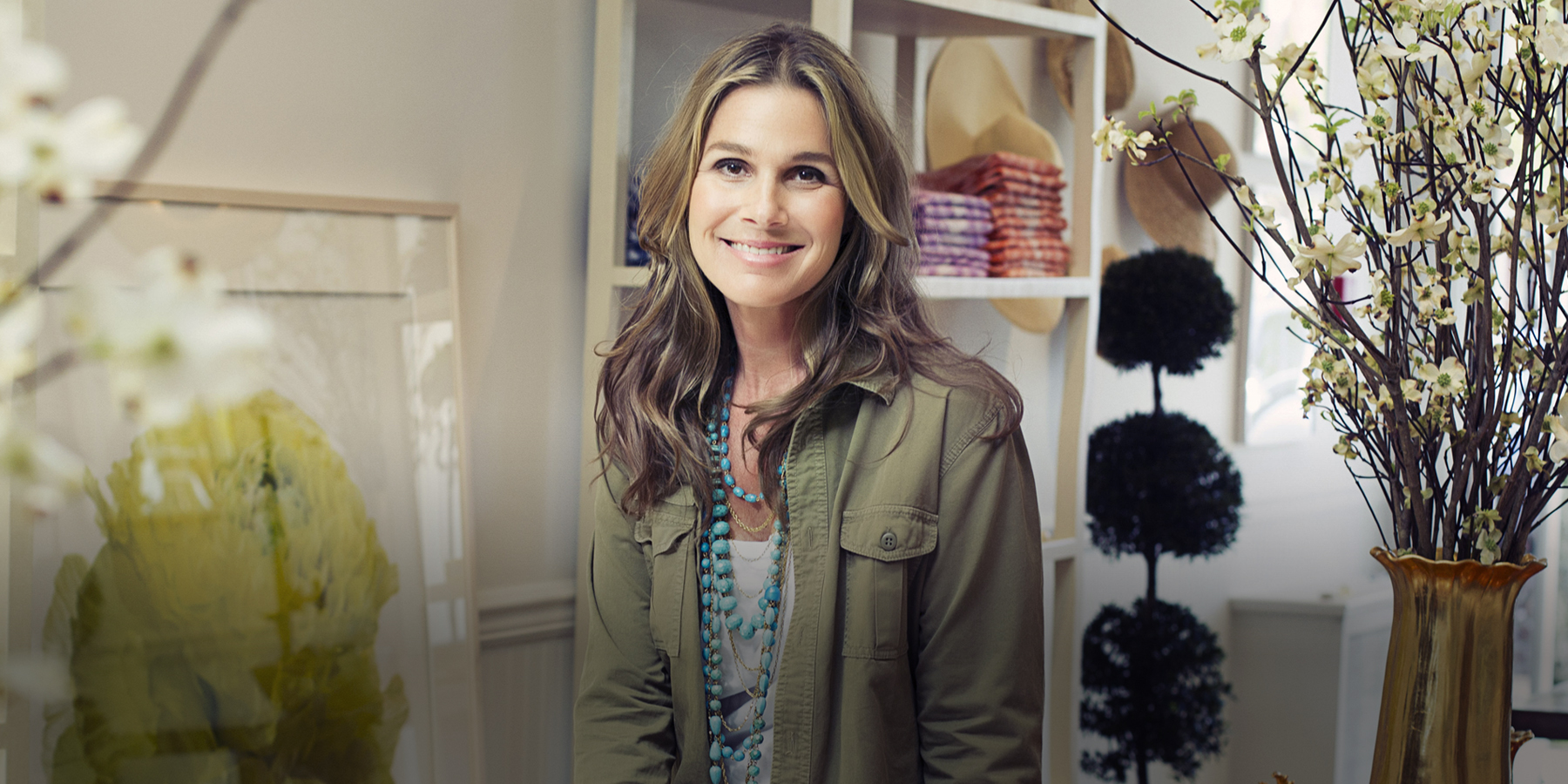 The cosmetics scion Aerin Lauder has expanded her year-old beauty company into a lifestyle brand that features fashion, accessories, home furnishings and decor — an haute one-stop shop for women on-the-go.

November 2013Even simply dressed, Lauder, seen here in her Hamptons barn, manages to exude a sense of glamour. Photo by Claiborne Swanson Frank

When I had children, my life changed,” explains Aerin Lauder, whose two sons are now teenagers. “I found myself working around their schedules and my time became more precious. Gone were the days when I could roam endlessly in search of the perfect lamp, say, or gift for a friend.” While most mothers accept this reality as inevitable and do their best to adapt, the granddaughter of the legendary entrepreneur Estée Lauder used it as an impetus to launch a business.

It’s all about making your life easier and more beautiful,” says Lauder of her new eponymous lifestyle brand, AERIN, which features a sophisticated array of home, beauty and accessory offerings. “For a busy woman, true luxury is having your options pre-edited for you.”

Although she remains Estée Lauder’s style and image director as well as a familiar face from its Private Collection fragrance campaigns, after two decades of working at the beauty giant founded by her grandmother, Lauder decided to parlay her experience there to launch AERIN in September 2012. She first focused, not surprisingly, on a beauty line that she distilled down to a handful of essentials, including a powder foundation, illuminating bronzers and a stain that works for both lips and cheeks.

But makeup was just the beginning. “Having watched the category for so many years, I knew that there was an opportunity for a modern, feminine and effortless approach to beauty,” Lauder explains. “But I also realized that approach would translate into other categories: home, fashion and accessories.” So in late 2012, Lauder introduced a line of candles and elegant home objets, including agate coasters, shagreen jewelry boxes and brass nesting bowls. Earlier this year Lauder added chic footwear, sunglasses and jewelry, and this fall she has launched headfirst into furniture, lighting, and fabrics and carpets, partnering with such top manufacturers as EJ Victor, Visual Comfort and Lee Jofa, respectively. The result is a sophisticated collection whose constituent parts work seamlessly together. As Lauder recently tweeted: “Beauty is my heritage, but home is my passion.” 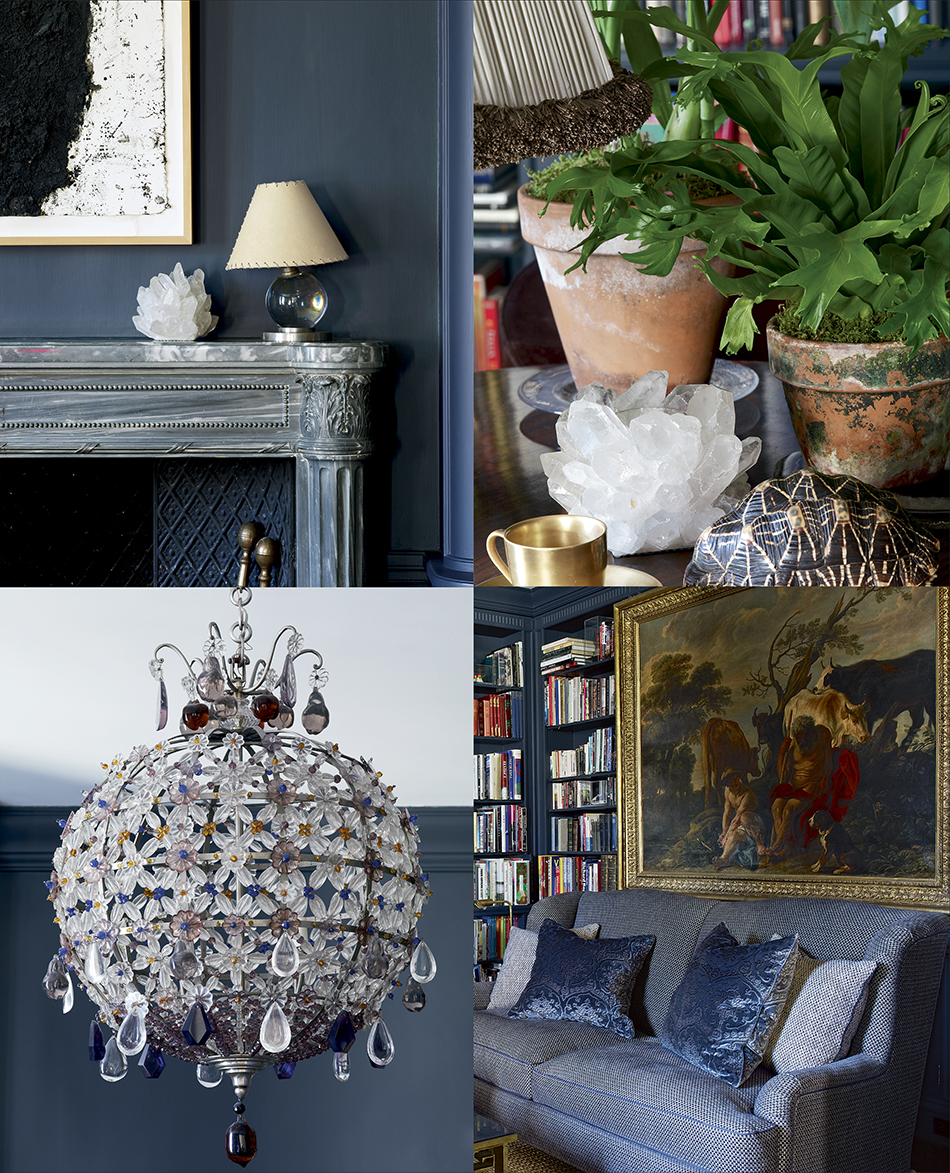 Color gurus Donald Kaufman and Taffy Dahl created a custom slate-blue hue for Lauder’s Manhattan library, which complements the sofa’s wool upholstery. A piece of rock crystal and a 1930s chandelier from a Parisian antiques shop add sparkle to the dramatic space. Photos by Simon Upton/courtesy of Potter Books.

It isn’t particularly surprising that the Lauder understands the art of surrounding herself with beautiful things — her parents, Ronald and Jo Carole Lauder, are noted collectors of art, antiques and furniture. (Ronald, a former U.S. ambassador to Austria, among other accomplishments, founded the Neue Galerie, the jewel-box museum on New York’s Upper East Side filled with masterworks by the likes of Klimt, Schiele, Hoffmann, Loos and Moser.) And Estée was known for her dressed-to-the-nines personal style and beautifully decorated homes.

Today, Lauder has inherited her grandmother’s sense of fashion and design; albeit hers is a much less formal iteration. She favors understated designs by the likes of Michael Kors and Stella McCartney; a recent AERIN Beauty ad campaign captured the company founder at her comfortable best, looking pretty in a silk blouse, jeans and bare feet.

At the same time, Lauder still manages to exude a sense of glamour. And her love of all things gold — from the bracelets that always adorn her arms to the gilded antique mirrors hanging inside her homes — finds expression across AERIN’s categories, with floral porcelain vases hand-dipped in gold and crystal glassware with 24-karat gold-leaf bases serving as a few luxurious examples.

The same relaxed elegance extends to her homes in Manhattan, Aspen and East Hampton, where she lives in a Georgian pile that was once owned by her grandmother. Over the years she’s worked with such celebrated design talents as Daniel Romualdez and Jacques Grange and her houses have exerted a strong influence on her home collection. “Many of my designs are inspired by antiques I’ve lived with and loved,” Lauder says, “whether it’s a chandelier I bought in Sag Harbor or a beautifully proportioned slipper chair I found at an antiques shop in Paris.”

Lauder’s houses, as well as snapshots, memories and musings, fill the pages of Beauty at Home (Potter Style), Released in late October, Beauty could act as an illustrated guide to the brand Lauder is building. Recently Sara Bliss spoke to Lauder about the book, her life and where she finds her inspirations for AERIN’s various lines.

1. Tell us a little about your new book, Beauty at Home, which was released by Potter Style in late October.

The book is written in the voice of one friend speaking to another, as if it’s a conversation. I’ve opened the doors to my home, my family and my life. You see my love of family traditions as well as my love of comfort. I’m barefoot in my PJs, having breakfast surrounded by cereal boxes, toys and my children’s art framed on the wall. My life and AERIN are both about style made simple, so the book shows you how to take the everyday and make it beautiful. 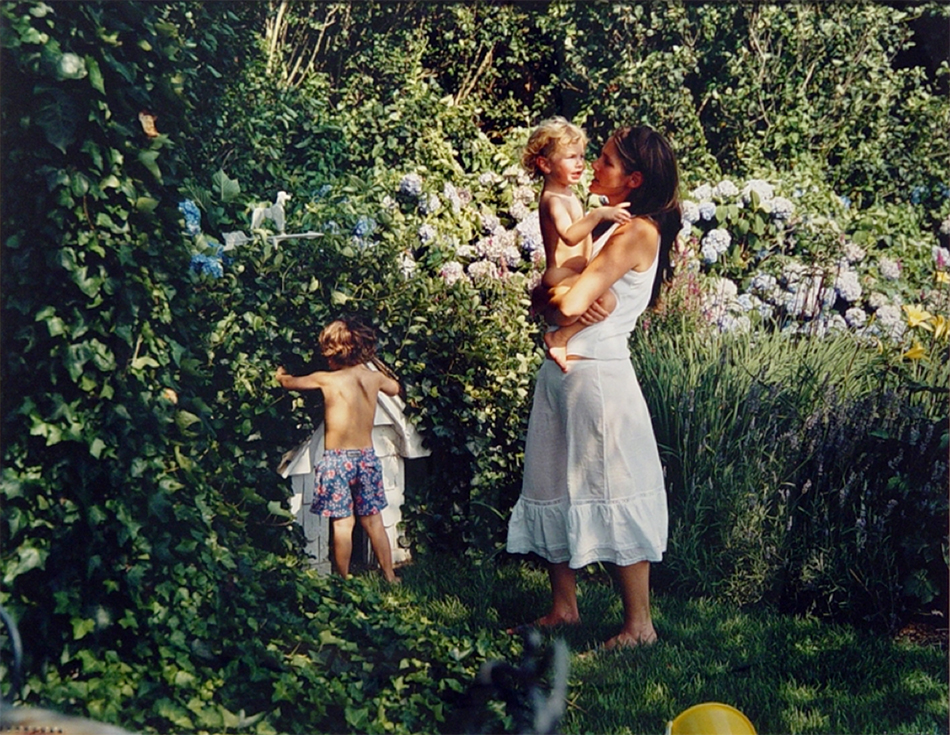 2. As you say, so much of AERIN is inspired by your life. In particular, how has motherhood influenced your brand?

As the mother of teenage boys, I appreciate things that wear well, that aren’t too precious or fragile, that can withstand the test of time. That was a huge influence on my home collections. It’s really that idea of having your home be both comfortable and luxurious. The leopard couch in my furniture line is perfect for watching a movie with your children. It has that sense of luxury you find in a beautifully made piece, but with the print, it’s also extremely practical. One of the reasons, I like pattern is because it hides things, which is important with children, so we have many florals and prints in the pieces we designed for Lee Jofa. With children, I also love seagrass because the more wear it gets, the more beautiful it is.

3. What have been some of your design inspirations for your furniture, lighting and fabric lines?

What’s interesting about the collection is that it’s very European but with American influences — it has that international sensibility. It really epitomizes my style: influenced by many different cultures and mixing many different elements. I grew up in New York, lived in Vienna for a few years when I was a teenager and spent so much time traveling throughout Europe. I like that juxtaposition of different time periods and design styles — a contemporary photograph paired with a 1930s lamp and a 1970s table, say. The mix makes a room feel 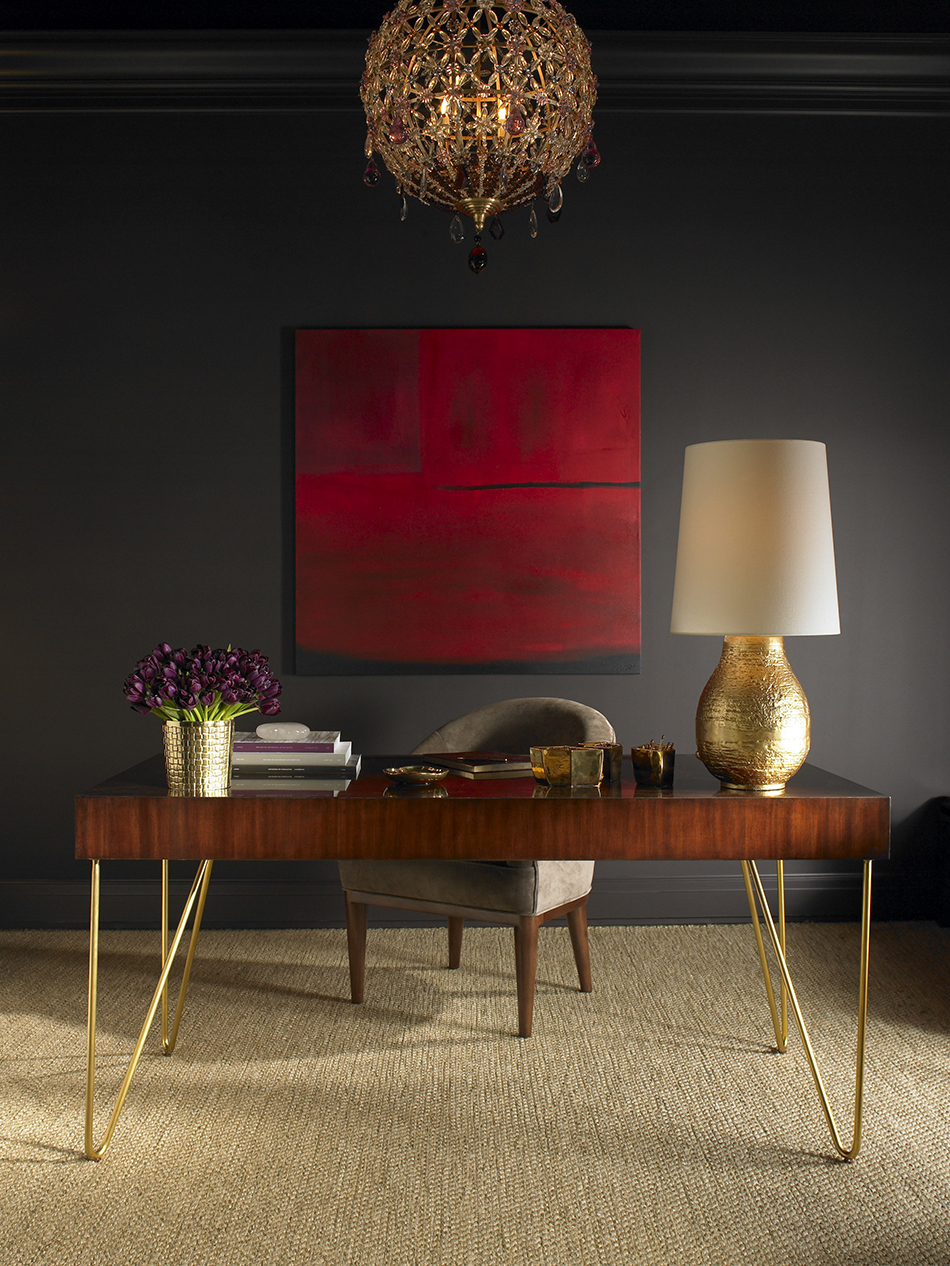 The Heather ceiling light was inspired by the 1930s French chandelier that hangs in Lauder’s Manhattan library. The Pine desk pairs a rich mahogany top with sculptural brass legs.

4. You are an avid collector of contemporary art. How did that become a passion, and who are your favorite artists right now?

I have always been drawn to contemporary art. The sense of the unexpected— it’s so appealing to have in your life. I like mixing a room with recent works and traditional art.

I love so many artists, but right now I am drawn to Robert Mangold’s color sensibility. James Turrell’s work is amazing; it is so simple but powerful. I love Richard Dupont’s new series of all-white canvases. Clifford Ross really captures the sea and nature, and their strength and power. I think Brice Marden is extraordinary. He’s a wonderful personality. And the photographer Tina Barney did a series of me with my children surrounded by trucks and diapers, toys and bottles. She really captures relationships and personalities.

5. You collect a range of antiques. What do you look for when buying a new piece? What are your favorite antique or vintage pieces at home?

Both my parents really influenced me to love art and design, so I started going to flea markets and collecting as a child. The London and Paris flea markets have always been a part of my life. When I was very young, I began with vintage quilts and glassware. One of my favorite pieces ever is the 1930s chandelier in my library. It’s a total statement piece that I found at an antiques shop on the Left Bank. It influenced the Heather chandelier in my AERIN line. Another piece I adore is this wonderful André Arbus gold sideboard in my office that I found in Paris. I love the shape, and, of course, it’s gold.