Emerging in the mid-1960s with the Southern California Light and Space movement, James Turrell (b. 1943) has devoted his career to artwork that challenges the limits of human perception. From his early experiments with geometric projections that transfigured space with light to the colossal decades-long undertaking of transforming an extinct volcano in northern Arizona into the immersive Roden Crater, he has strived to “create an experience of wordless thought” through his art.

An avid pilot as well as an artist, the Los Angeles native has long considered the sky to be his studio. Before creating his first light sculptures as a graduate student at the University of California at Irvine, he studied perceptual psychology and math at Pomona College. His practice has been an ongoing investigation of new techniques that would envelop viewers in light and color, whether through his research of optical phenomena related to sensory deprivation or his construction of complex architectural spaces that allow visitors to meditate on the materiality of light.

Most encounters with Turrell’s art are site-specific, such as his series of Skyspaces, which includes more than 80 chambers around the globe with apertures open to the sky. The shifts of daylight from sunrise to sunset make every moment in a Skyspace unique. To build his frequently monumental visions of space, light and color, he has also worked in far-flung corners of the planet, from the 1996 Celestial Vault — situated in an artificial crater in the Netherlands, where visitors can contemplate the contour where Earth meets sky — to the nine installations in the James Turrell Museum nestled in a remote vineyard in Argentina. Whether installations, prints, drawings, models or holograms, all of Turrell’s art has engaged with the wonder of light and how it shapes our observation of the world. 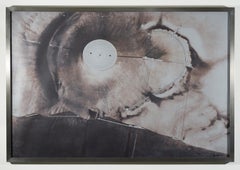 Raethro
By James Turrell
Located in Houston, TX
James Turrell Raethro, 1990 Aquatint 42 7/16 x 29 13/16 inches ed. 30 *This work is in excellent condition and has been framed according to all archival preparations.
Category

Related Items
Reggae Curve, Painted Hanging Sculpture by Kevin Cole
By Kevin Cole
Located in Long Island City, NY
This hanging sculpture by the American artist Kevin Cole, is a modern conceptual work. It is constructed of painted rubber and wood. Cole was quoted, "Throughout all of my work, I ...
Category

H 68 in. W 68 in. D 12.5 in.
Floor Chimes (Sonambient)
By Winni Brueggemann
Located in Long Island City, NY
This modern abstract bronze sculpture by Bruggemann is characteristic of his work. His works derive from and depend largely upon elemental laws of physics and kinetic principles, ap...
Category

H 43.5 in. W 6 in. D 6 in.
Paintbrushes (Orange Red and Green) IV
By Fernandez Arman
Located in Long Island City, NY
An accumulation sculpture of paintbrushes by the great accumulator sculptor, Arman. This work features 13 paintbrushes with various shades of paint in oranges, greens, and reds again...
Category

H 46 in. W 54 in.
Gard
By James Turrell
Located in Houston, TX
Category

H 21 in. W 33 in.
Carn
By James Turrell
Located in Houston, TX
Category

Find wide variety of authentic James Turrell art available for sale on 1stDibs. You can find work that includes elements of blue and other colors if you are browsing the collection of art to introduce a pop of color in a neutral corner of your living room or bedroom. You can also browse through art by James Turrell in etching, aquatint, archival pigment print and more by medium. Much of the original work by this artist or collective was created during the 20th Century and is mostly associated with the Contemporary style. Not every interior allows for large James Turrell art, so small editions measuring 6 inches across are available. Customers who are interested in this artist might also find the work of Tony Caramanico, Richard Merkin and Kiki Smith. On 1stDibs, the price for these items starts at $6,000 and tops out at $67,500, while the average work can sell for $25,000.