Alan Tanksley Has Mastered the Art of the Mix 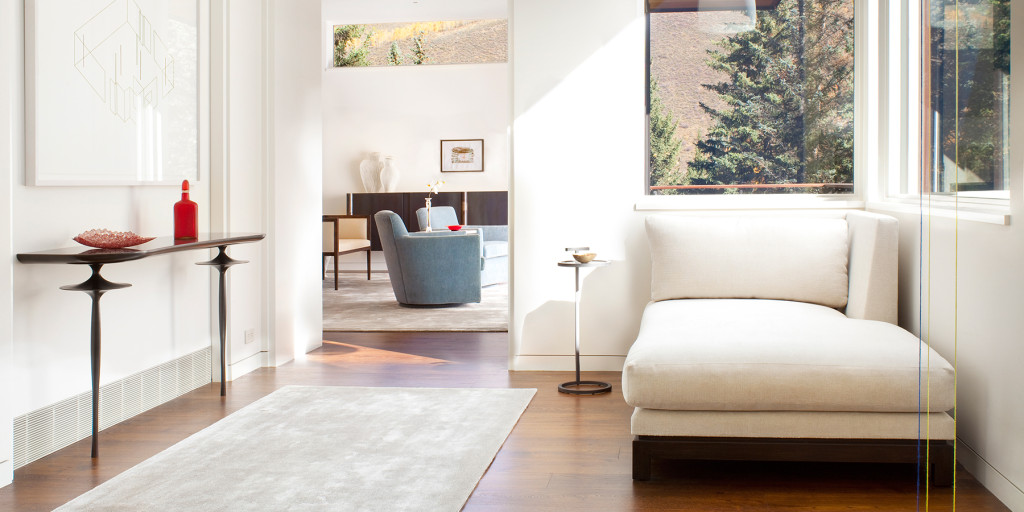 Blending traditional and modernist elements, the New York designer has made a name for himself by eluding easy categorization. 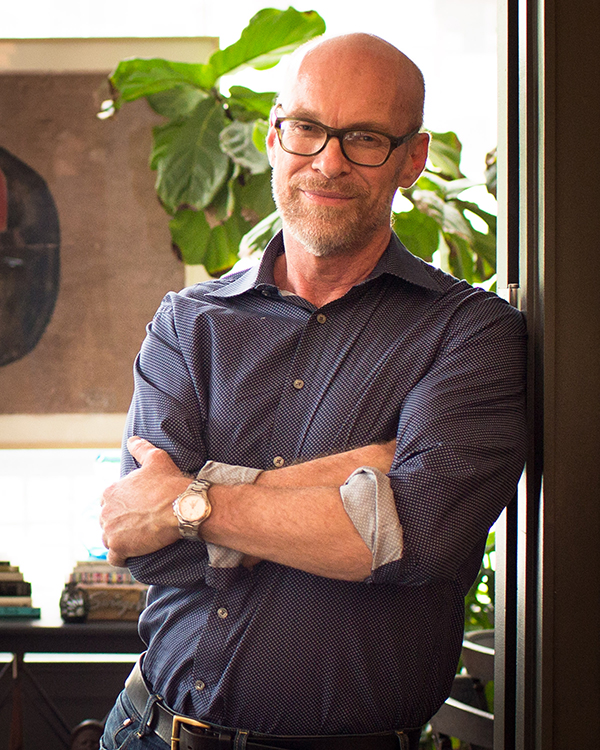 Tanksley makes this statement as he sits in his office inside the redbrick Western Union Telegraph Building, built in 1884 and designed by Henry J. Hardenbergh, the architect of the Plaza Hotel and the Dakota Apartments. The space, with its arched windows overlooking Madison Square Park, was gutted when Tanksley took possession, and his renovation is an updated homage to the Gilded Age durability of Hardenbergh’s design as well as that of the neighboring Flatiron Building. Antiques mingle with mid-century modern pieces and contemporary art, and the effect is less office than atelier — relaxed, chic and slightly bohemian.

Tanksley owes his mix-and-match philosophy both to distinguished design mentors and to his own fundamentally modernist leanings. Raised on Long Island (his father was a commercial airline pilot), he received a degree in interior design from Arizona State University. Like many a star-struck design major, Tanksley went to New York City after graduation, landing a plum job with Albert Hadley, followed by a longer stint with another design legend, Mark Hampton. “I didn’t grow up in the world of high-end architecture and decorating,” Tanksley recalls. “I had to learn very quickly how it worked. You become a quick study.” 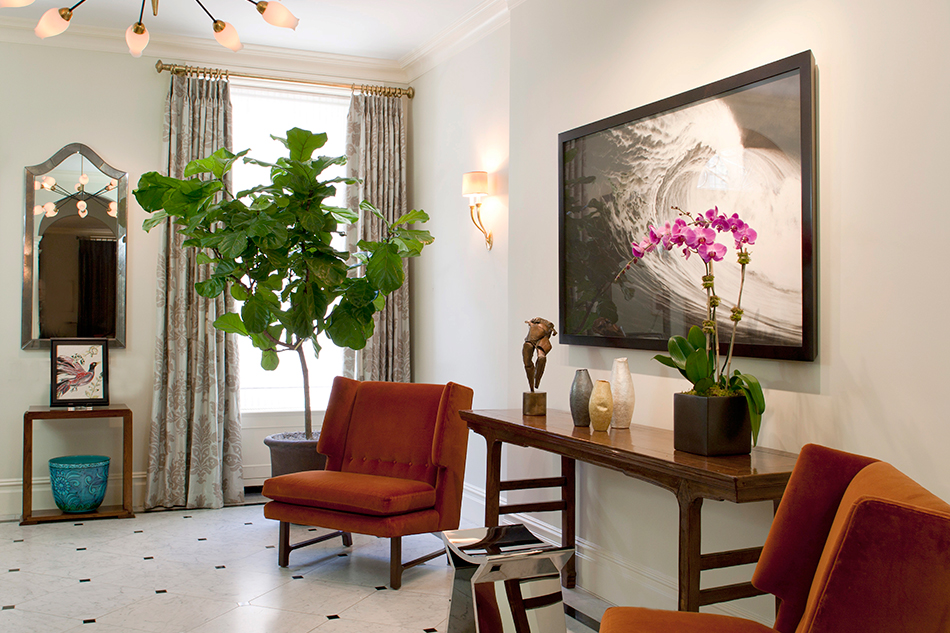 In the entry hall of a townhouse on Manhattan’s Upper East Side, Tanksley flanked an 18th-century Chinese altar table with a pair of vintage Elephant chairs by Edward Wormley. The drawing above the table is by Robert Longo, while the mirror-polished stainless-steel stool is by John Lyle. Photo by John Armich 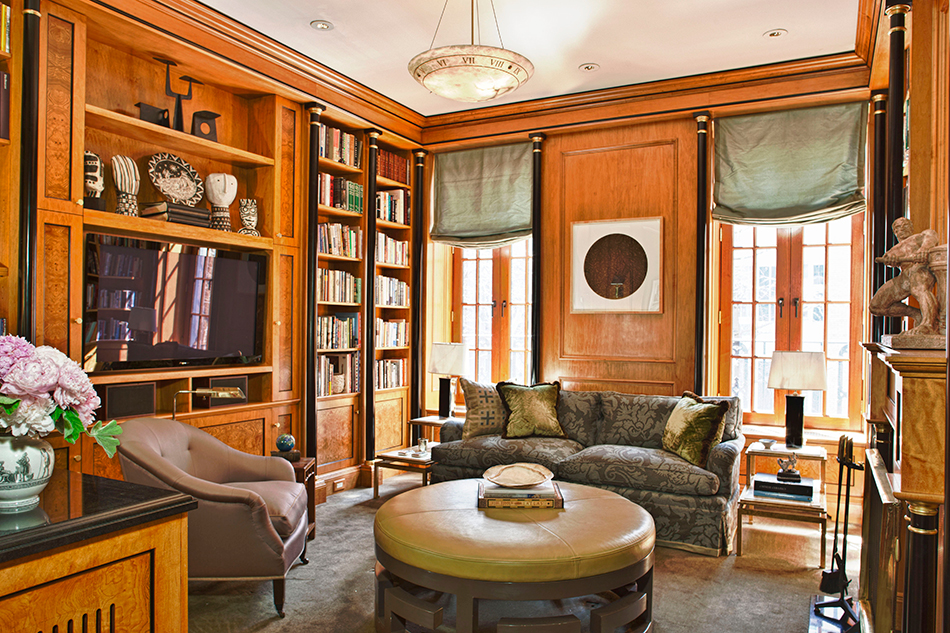 Stepped brass side tables custom designed by Tanksley himself bookend the couch in the townhouse’s wood-paneled library. Photo by John Armich 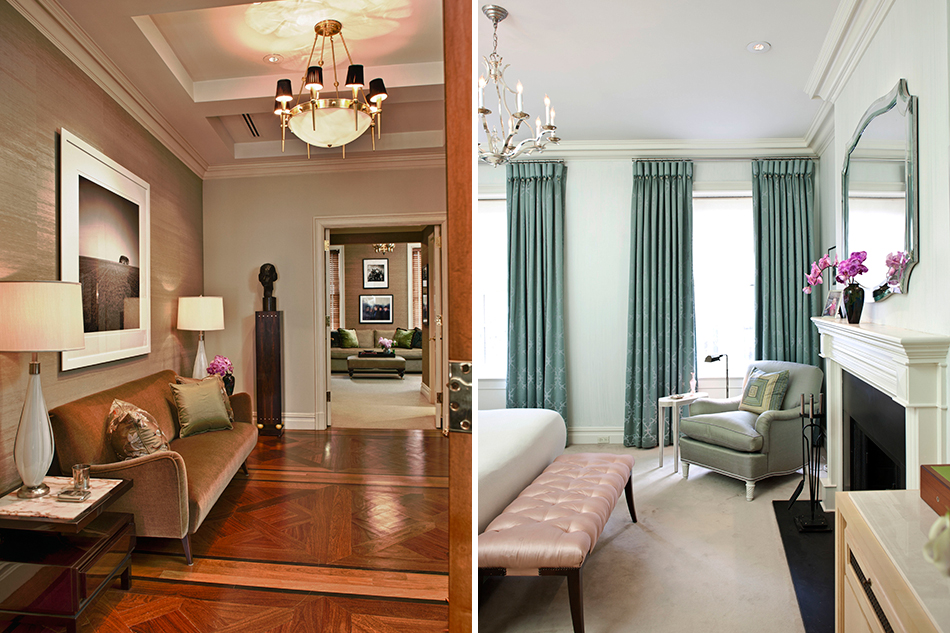 Left: The townhouse’s stair landing features a vintage Paul Laszlo sofa. Right: A pink-silk-upholstered tufted bench, made in the style of Tommi Parzinger, sits at the foot of the bed in the home’s master bedroom. Photos by John Armich 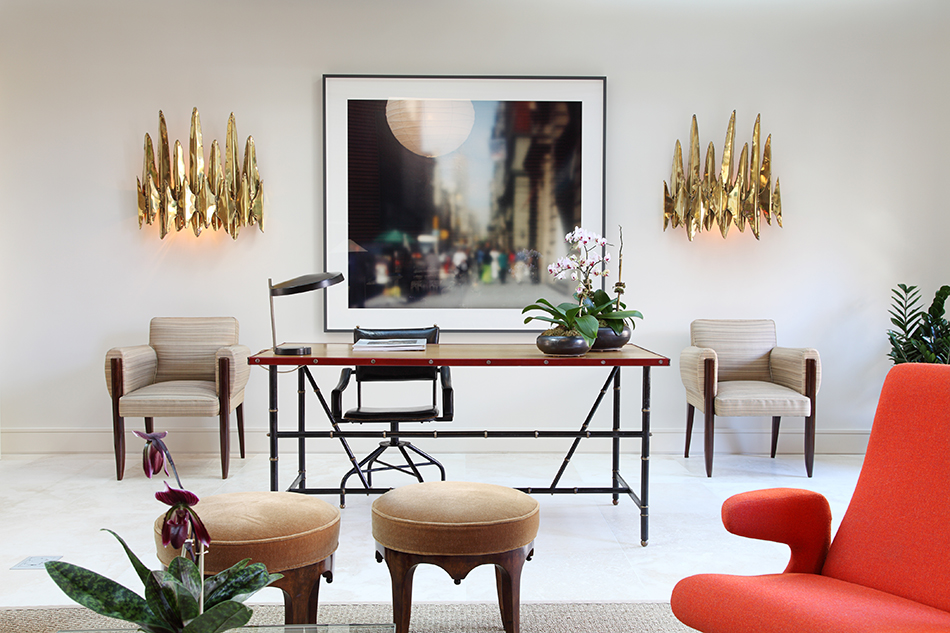 Michael Haverland was the architect for a triplex on New York’s Gramercy Park, where Tanksley’s design for the living room combined a Jacques Adnet desk and chair from the 1950s with vintage brass sconces. The eye-catching fixtures hang above a pair of upholstered Jean Pascaud armchairs from 1935. Photo by Martin Crook 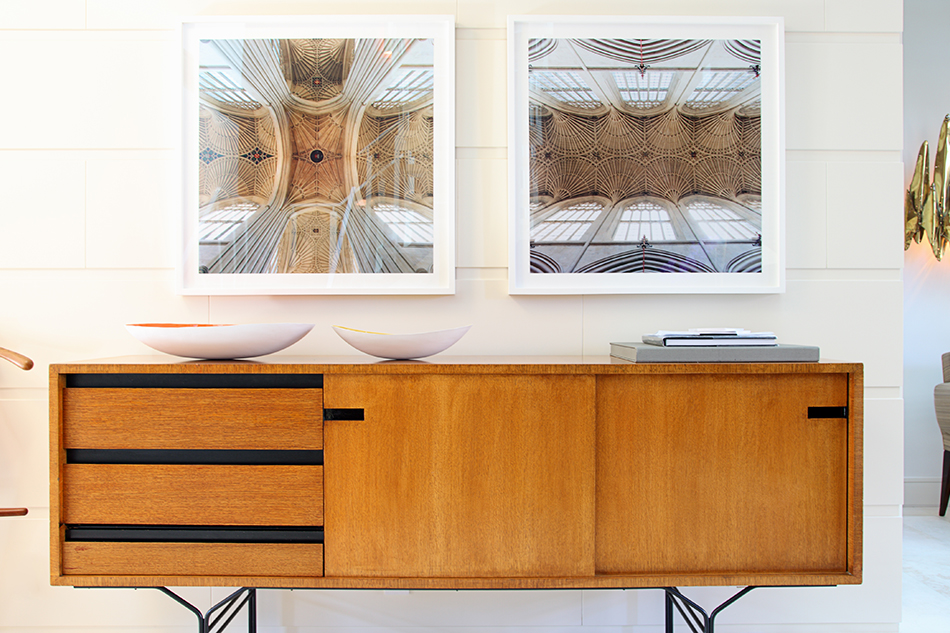 On the stair landing of the Gramercy Park triplex, a pair of architectural photographs by David Stephenson hang over a vintage French oak credenza. Photo by Martin Crook 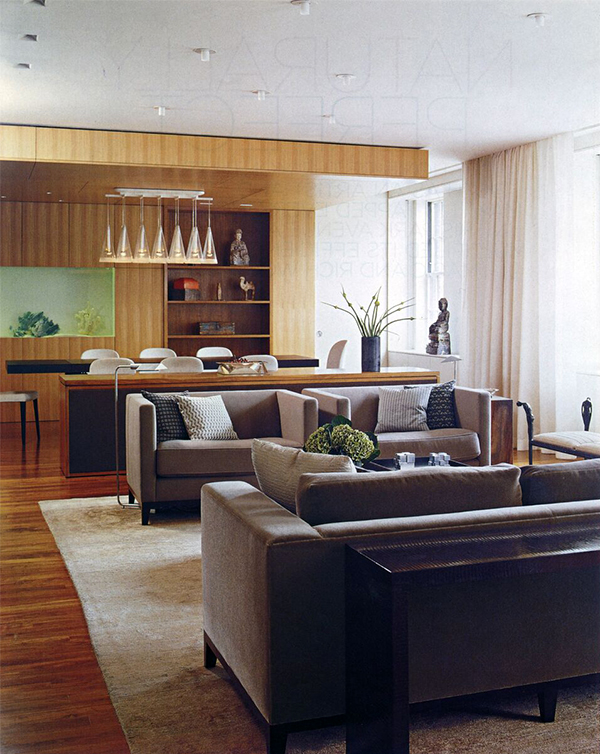 In a home on New York’s Park Avenue designed by architect Maya Lin, Tanksley placed a sofa and wide armchairs by Christian Liaigre for Holly Hunt atop a silk Tibetan carpet. Photo by Antoine Bootz

And study he did, absorbing the ways that Hadley and Hampton rejected dogma in favor of relaxed elegance. He recalls with equal fondness a modernist apartment with suede walls and Marc du Plantier furniture — “not most people’s idea of Mark Hampton,” he notes — and a Fifth Avenue apartment with 18th-century furniture by William Kent. “I fell in love with classical architecture,” Tanksley recalls. “But, ultimately, I preferred pared down.” Still, the rules of classicism were not lost on him. “Good proportion is developed and becomes an unconscious standard of measure,” he says.

In 1988, Tanksley opened an office with the designer Paula Perlini, the sister of Hampton’s wife, Duane, before going solo in 1993. He soon identified his ideal client: “a mature couple who have done this before and know the pitfalls. They appreciate the creative process. And they love collaborations.” Tanksley’s favorite examples are art collectors like the Tobers (she was the longtime chairman of the Museum of Arts and Design board) and former United States Ambassador to Denmark Edward Elson and his wife, Susie (for whom he decorated a Palm Beach house designed by their architect son, Harry Elson).

Tanksley was also hired by famed artist and architect Maya Lin to design interiors for three of her residential projects, and he collaborated with architect James Dayton on a contemporary ski house in Vail, Colorado. The clients in Vail wanted the interior to emphasize their collections of fine art and furniture by the likes of Donald Judd, Fred Sandback, Bryan Hunt and Gerrit Rietveld. “The collections came first in the design,” Tanksley says. 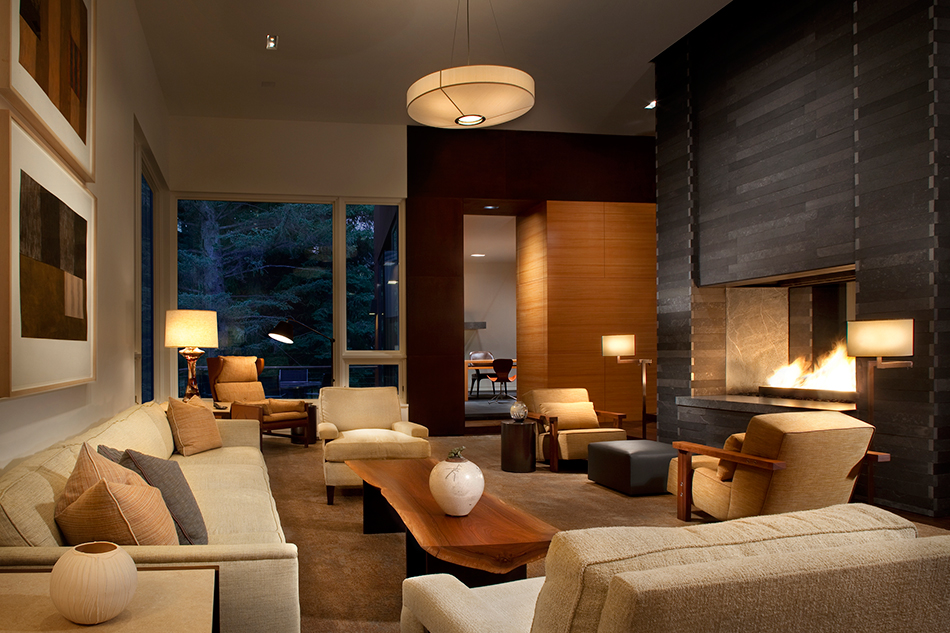 Back in the Vail home, a pendant lamp by Dennis Miller and a Donghia table lamp illuminate furnishings in warm neutrals and honey-colored wood. Photo by Martin Crook 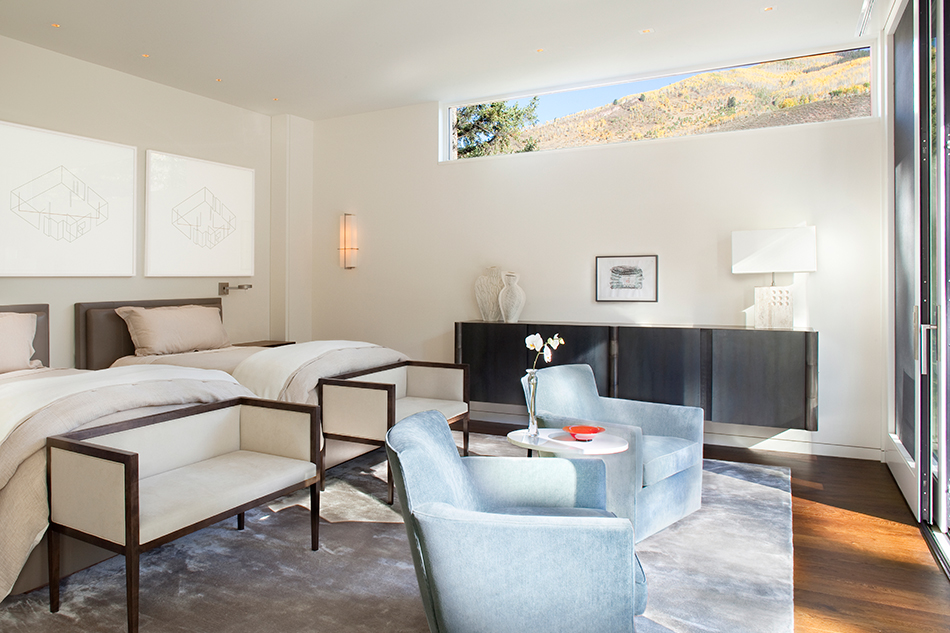 In the Vail bedroom, Fred Sandback drawings hang over the beds. The custom steel wall-hung credenza is by Belgian artist Franck Robichez. Photo by Peter and Kelly Gibeon 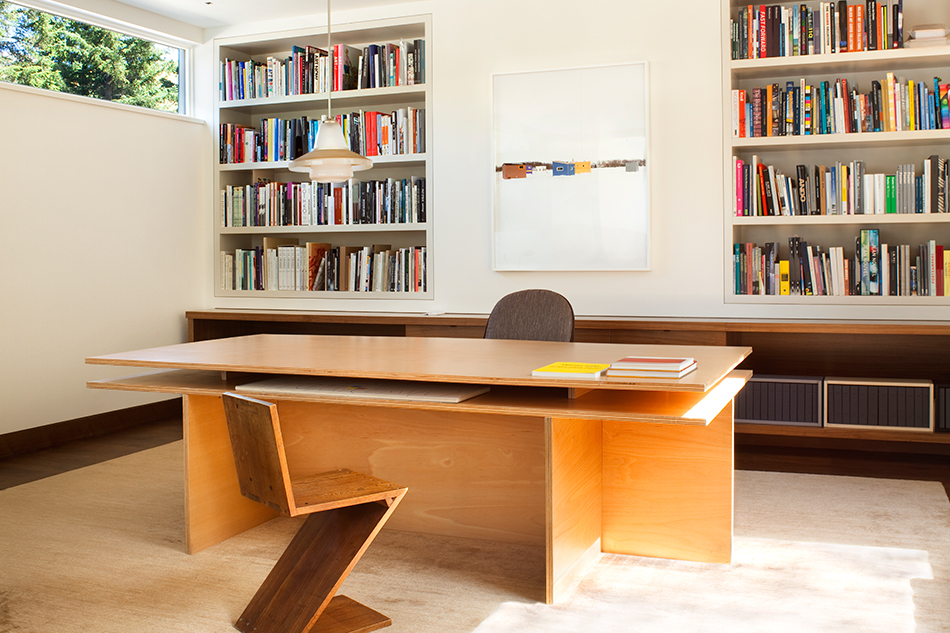 A Donald Judd desk in the study of the Vail home commands attention, especially when paired with a Gerrit Rietveld Zig Zag chair. “The collections came first in the design,” says Tanksley of the project. Photo by Peter and Kelly Gibeon 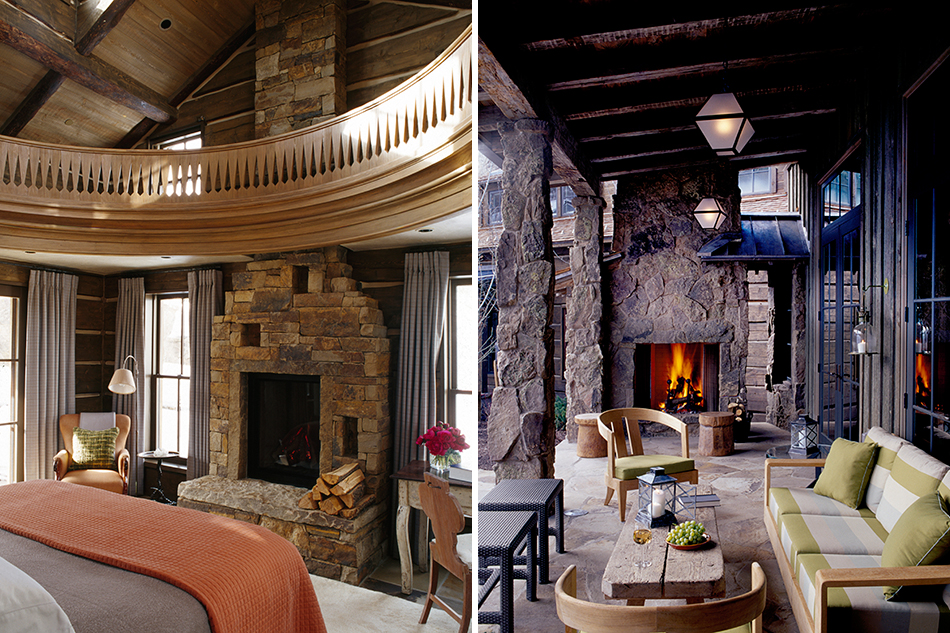 Left: Tanskley’s rustic design for a vacation home in Aspen, Colorado, drew inspiration from the surrounding rough-hewn stonework and wood-beamed architecture. Right: In nearby Snowmass, a similarly warm atmosphere is created by David Sutherland teak furniture and Holly Hunt fabric. The coffee table was made from a 19th-century butcher’s table. Photos by Nick Tinenenko and Paul Bardasjy 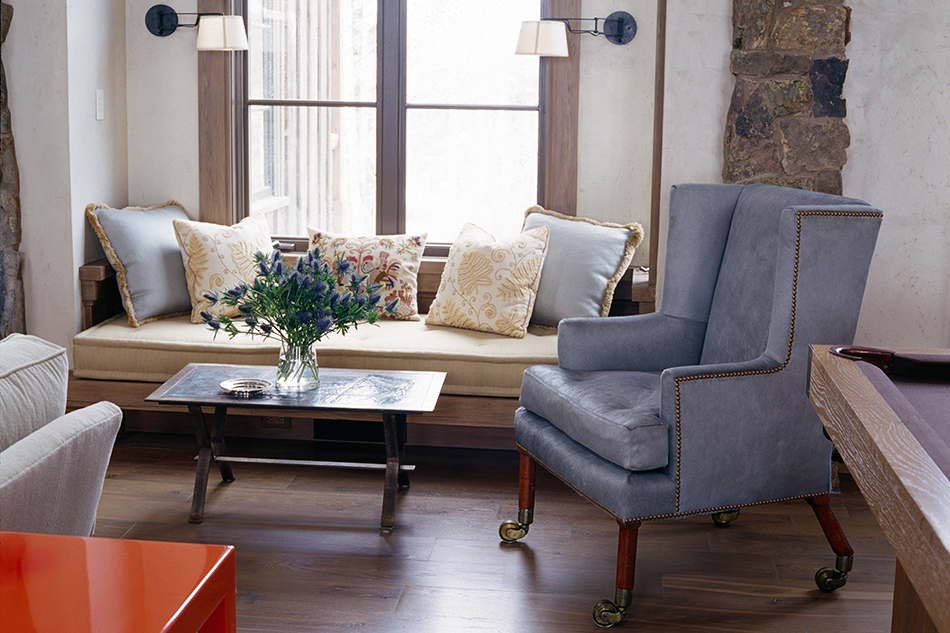 Elsewhere in the Aspen home, a 19th-century English wingback chair and a French 1950s steel and tile cocktail table form a reading alcove near a window seat. Photo by Nick Tinenenko and Paul Bardasjy 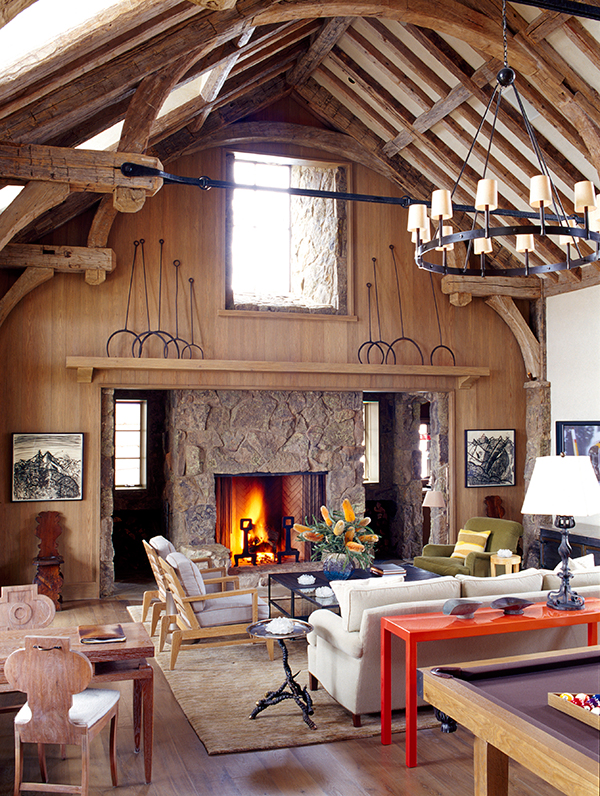 In the family room of the Aspen home, a Stephen McKay chandelier hangs from beams made of reclaimed barn timber. Photo by Nick Tinenenko and Paul Bardasjy

Also in Colorado ski country but at the other end of the stylistic spectrum, Tanksley designed a house for a Boston family that evokes a traditional European mountain lodge. Here, he got to explore what he calls the destination — the transition from the house’s public to private spaces, or “that on-the-way-to-somewhere-else pause,” he explains. For instance, in the expansive living room, Tanksley carved out a bay “where you can read a book,” and just beyond one end of the billiard table, he designed an alcove he calls “a deep reveal,” with a custom leather bench equipped with small pull-out drinks tables. The house’s details, like the hand-forged iron stair balustrade, are luxurious. And the contrasts are witty, such as the pairing of traditional English-style upholstered furniture with a bronze coffee table by the contemporary French artist Ingrid Donat. As Tanksley notes, you can throw yourself down on the furniture, but you’re putting your feet up on a work of art.

In keeping with the idea of destination, Tanksley notes that he loves “the process of discovery in a room.” Interestingly, one project that offered much to discover was not a commission but a product of the designer’s own history and imagination: a space for last year’s Kips Bay Decorator Show House. “The first showhouse I ever worked on was with Mark Hampton,” he recalls, “but I couldn’t design this room for Alexa” — Tanksley’s good friend Alexa Hampton, the late decorator’s daughter and a noted designer in her own right who now runs her father’s firm. “So her husband,” financier Pavlos Papageorgiou, “was my muse.”

References to Papageorgiou’s Greek background dot the cozy room: a lamp that reminds Tanksley of an olive tree, a Greek key-patterned trim on the throw pillows, the blue-and-white-striped jerseys worn by his and Hampton’s children in a watercolor portrait. The effect is warm and personal, a portrait not just of Papageorgiou but of a friendship. It is this generosity of spirit that makes Tanksley’s rooms, no matter what their stylistic vocabulary, speak so eloquently. 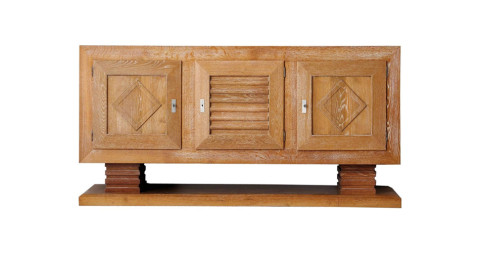 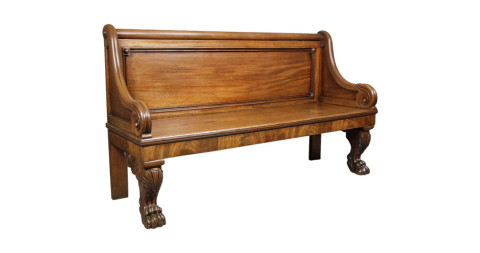 “I’ve been a fan of William IV furniture since my days working with Mark Hampton. This bench has a neoclassical presence. Although solidly resting on carved lion’s feet, this hall bench is going nowhere.” 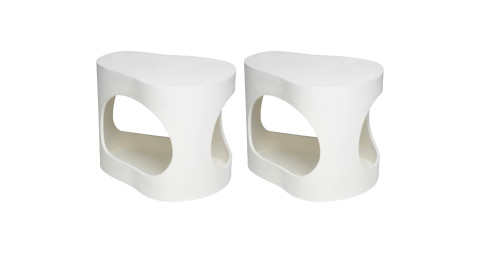 “I love the organic movement of Jacques Jarrige’s furniture.” 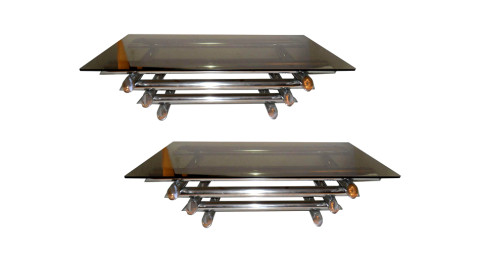 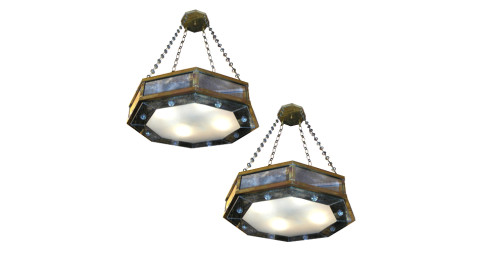 “I’d like to see these used in a long room, such as an entrance hall or gallery. They are very sophisticated.” 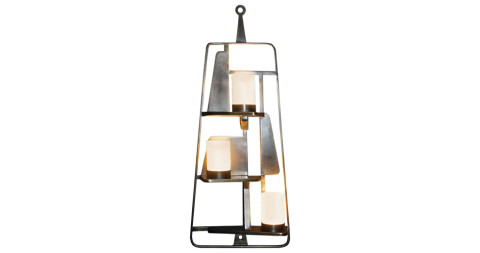 “I like that one can see the artist’s hand in John-Paul’s modern, organic work.” 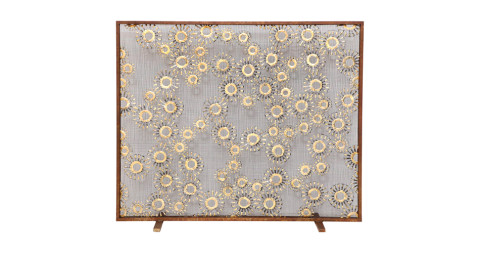 “This screen would be lovely to see year-round as the elegant focal point of a room, fire burning or not.”