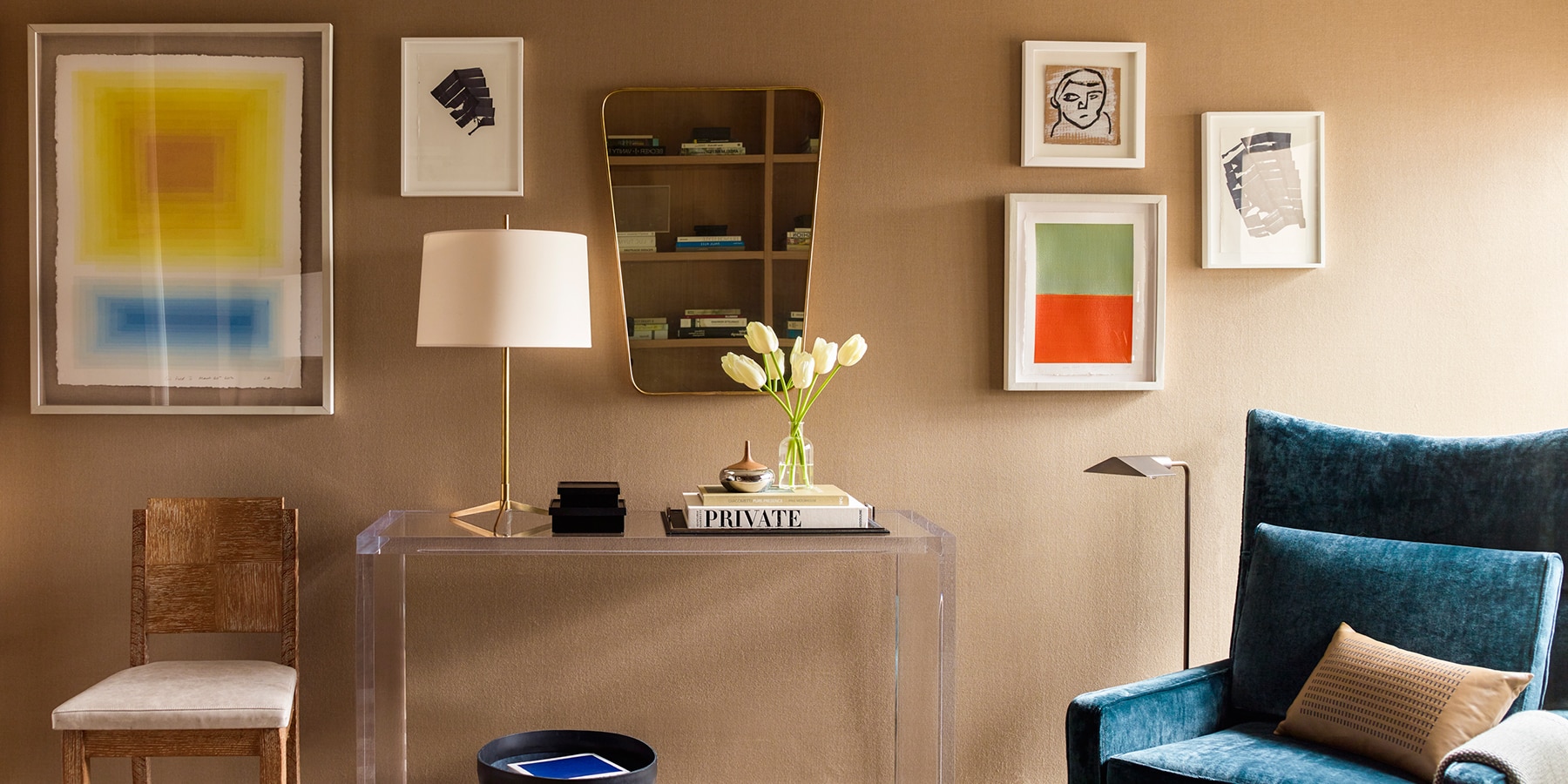 For her inaugural project as her firm’s sole proprietor, the designer worked with a young couple on their new home. 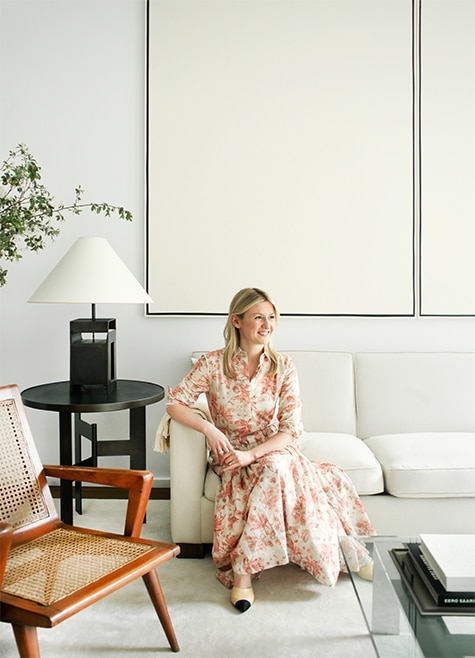 Alyssa Kapito designed this West Village apartment for a 20-something couple (portrait by Patrick Cline). Top: The study features a Paul McCobb office chair, sourced through 1stdibs, and a vintage Italian mirror from Eric Appel. Photos by Eric Piasecki, unless otherwise noted

When Introspective first introduced readers to Alyssa Kapito, we noted that the young and talented New York–based interior designer and her then-partner, Vivian Muller, had promoted their newly launched studio through an artfully curated Instagram account. As former interns of design legend Bunny Williams, the two knew full well that success in their profession was as much about savvy marketing as distinctive taste and efficient execution, and if they were to attract aspirational design-conscious millennials as clients, they needed to effectively deploy every variety of digital media.

Muller left the studio this past spring to explore other interests (the two remaining close friends). And fittingly, the first project Kapito completed as sole proprietor was for a client who discovered her work on Vogue.com.

Kapito describes her as a young Harvard graduate, an “up-and-comer in the fashion world.” She and her boyfriend from college, who is now charting a career in finance, had recently acquired an apartment in a trendy new luxury building in New York’s West Village. While spacious and offering enthralling Hudson River views, their new home was no gracious prewar six. Indeed, Kapito describes the layout as “cookie-cutter.” Her mandate, then, was to create a supremely comfortable nest that would be tranquil, polished and truly bespoke, with a touch of levity — they’re 20-somethings, after all.

Kapito says that she and the couple “had amazing chemistry,” which should come as no surprise since all three are youthful and full of promise. So, putting the apartment together was what she deems “smooth sailing” from beginning to end. In fact, once all the elements were acquired for the apartment, the pair went off on a two-week vacation, and Kapito and her team accomplished a full install while they were away. When they returned, it was to an entirely new home.

As handsome, if subdued, as this residence is, what may be most intriguing about it is how cleverly Kapito has harmonized its masculine and feminine elements. It’s a tribute to her skill as a designer, while also suggesting a new equipoise among the coupledom of Generation Y. 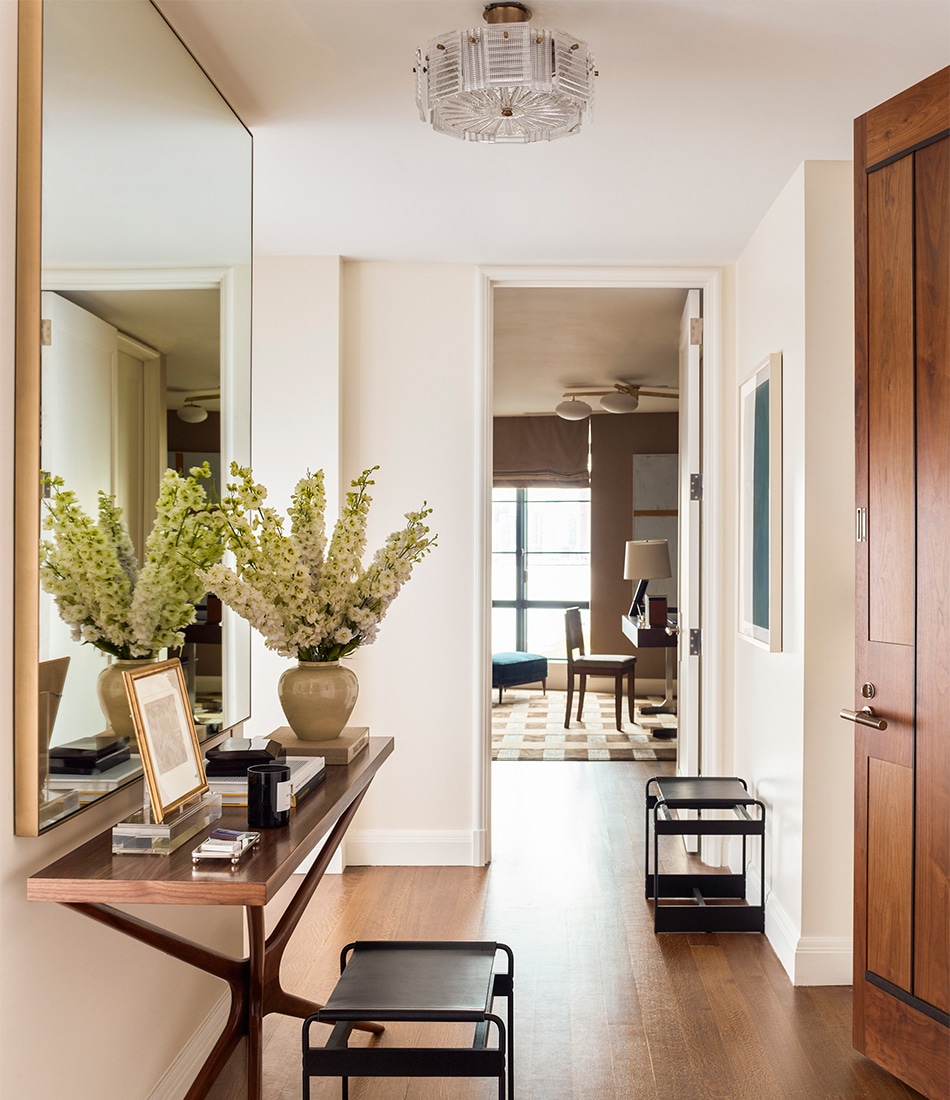 Kapito designed the custom console in the entryway, which includes a flush-mount light from J.T. Kalmar and leather benches from Michael Dawkins.

Workdays are long for young careerists and — considering the high-stakes fields these two are in — stressful, more often than not. To produce a relaxing atmosphere the moment they walk into their foyer, Kapito chose a palette that engenders calm. In previous projects, the designer has shown herself a skilled orchestrator of pale, soothing, tone-on-tone neutrals. But such soft hues can create spaces with a highly feminine air. So here, she went deep — in hue, that is.

She painted the walls a rich creamy Wimborne White by Farrow & Ball that contrasts with the glacial whiteness of the ceiling and moldings, contributing complexity to the space without adding actual color. A graceful console table in walnut of her own design enhances the mellow tone of the walnut-stained oak flooring, as do two robust black metal and leather benches from Michael Dawkins.

Contrasting with these contemporary pieces is a mid-century ceiling light from the Austrian firm J.T. Kalmar, which she found on 1stdibs, the source of many of the apartment’s vintage furnishings. “It may be small,” says Kapito, “but it has a big impact style-wise.” Through the convenience of shopping online, Kapito says she can easily mix periods and designers — French, Italian and American — and so enliven each room with different design dialogues. 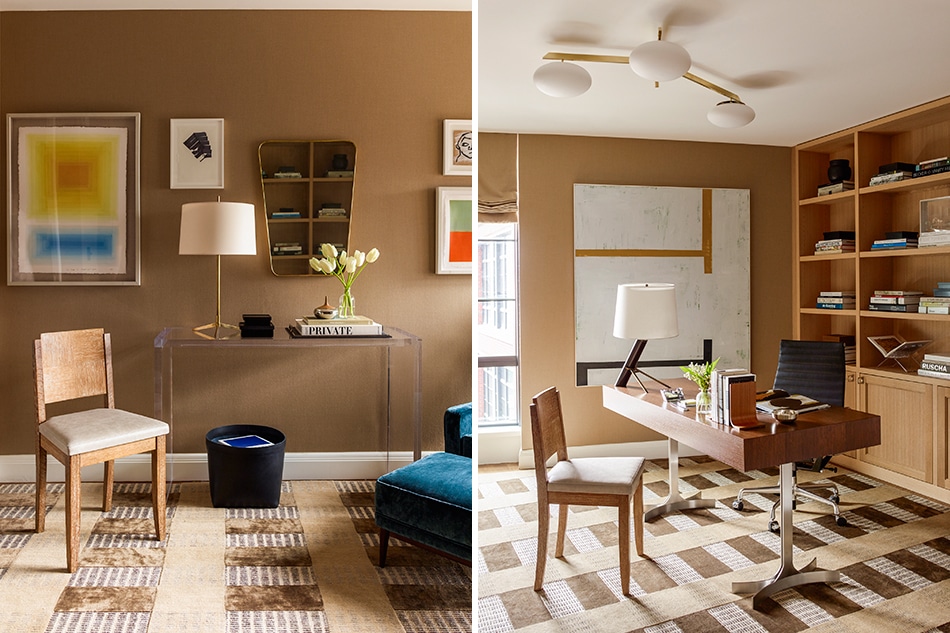 Left: Artworks from Gerald Bland hang over a Jean-Michel Frank–style chair. Right: A 1970s-inspired walnut-and-steel desk is paired with an Eames office chair. The light fixture is by Angelo Lelli.

Because the study can be glimpsed from the foyer, Kapito was careful to extend the masculine geometries of the benches into that room, where the walls are covered in an appealing caramel-toned wool. She fashioned the draperies from the same cloth, creating a cocooning effect.

For the floor, she worked with the textile house Holland & Sherry to develop a grid-patterned rug with a complex pile that echoes the apartment’s hues while also correcting the awkward asymmetry of the room’s architecture. The strong though fluid lines of a 1970s-style walnut desk and an Eames desk chair add to the room’s masculine character, which Kapito tempered with a pair of demure oak chairs reminiscent of Jean-Michel Frank’s refined designs, a globular chandelier by the Italian avant-gardist Angelo Lelli and a witty polygonal mirror, also Italian, on the opposite wall. There, she hung a quirky collection of artworks in an off-kilter display and balanced it with a Paul McCobb blue velvet armchair and ottoman. Although McCobb is somewhat less well-known than some of his mid-century American peers, he is a favorite of Kapito’s. “His designs have a subtlety and grace you don’t always find in other American mid-century furniture.” 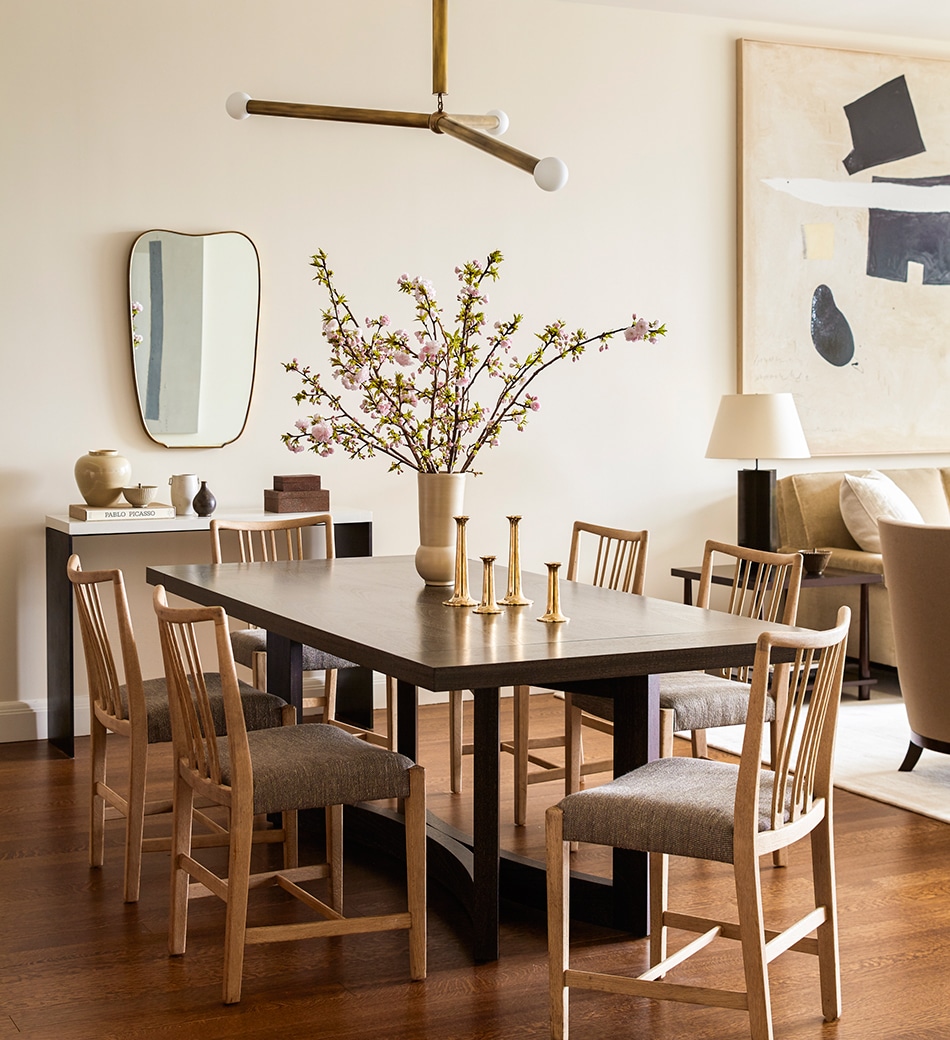 A light fixture by Apparatus hangs over a cerused-oak table and a set of vintage Danish dining chairs. The mid-century Italian mirror is from Eric Appel.

Because the clients are just starting out in life, they moved into the apartment with almost no furniture. One of the few pieces they brought with them was a dark, good-looking cerused-oak dining table in an ebony stain. Once more balancing light and dark, masculine and feminine forms, Kapito paired the table with a collection of mid-century Danish chairs in oak, which she upholstered in a linen tweed. She placed yet another curvilinear mid-century Italian mirror on the wall, this time above a rugged yet spare concrete and blackened-steel console by Eric Slayton, and topped off this composition of rounded and linear forms with, appropriately enough, an Arrow chandelier from Apparatus that combines the two. 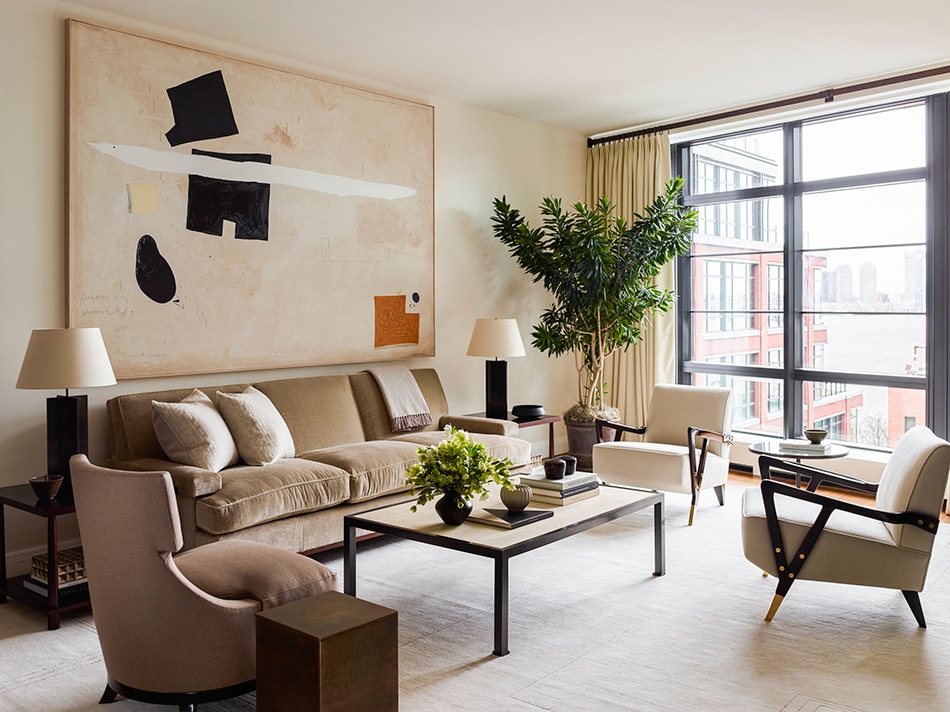 The living room features chairs from Van den Akker and a shagreen-and-bronze cocktail table. The rug is by FJ Hakimian, and the pottery is from Bernd Goeckler Antiques.

The interplay of hard and soft, line and curve adds further interest in the living area, where an amply upholstered sofa in lush caramel-colored velvet mohair from Roman Thomas invites lounging, as do the two light-footed Charles Club chairs in walnut with brass fittings from Van den Akker. A subtle geometry is even carved into the downy ivory-colored wool carpet from FJ Hakimian. An exotic Reflexa tree in the corner pulls in the captivating view. It’s “a neutralist’s dream exercise,” declares Kapito when discussing the room. “We really focused on texture over pattern here and ran those taupe and beige colors throughout. The metals, like the bronze coffee table and the brass on the chairs, really did the talking, as did the artwork.” 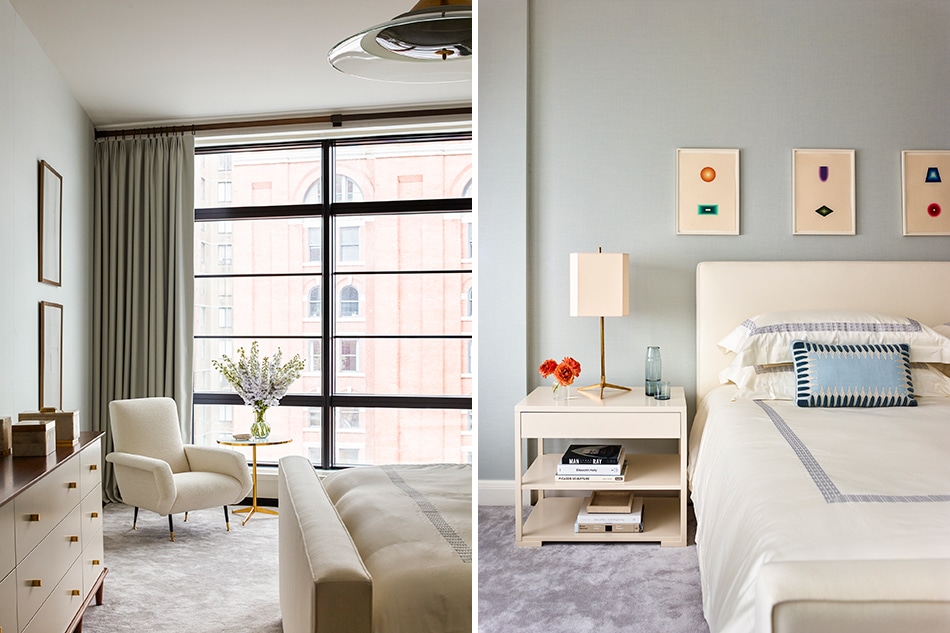 Left: A Fontana Arte chandelier hangs in the master bedroom, which contains a mid-century Italian chair and a Paul McCobb table. Right: A series of colorful woodblock prints by Yasu Shibata from Pace Prints is displayed over the custom bed, which is topped with a pillow by Holland & Sherry.

Kapito’s balancing of masculine and feminine continues in the master bedroom. She counterweights the mostly rectilinear furnishings with walls covered in a pale minty blue wool fabric, a silky gray carpet and a ladylike Italian 1940s armchair in an ivory bouclé. “It completely envelops you and is so serene,” she says. “The artwork above the bed was such a moment, too — taking that softness to a whole other level by bringing in some bright and strong jewel tones.” The dainty geometries of prints by the Osaka-born artist Yasu Shibata charmingly reverberate in the patterns of the bedspread and pillows and even the form of the bedside lamps. 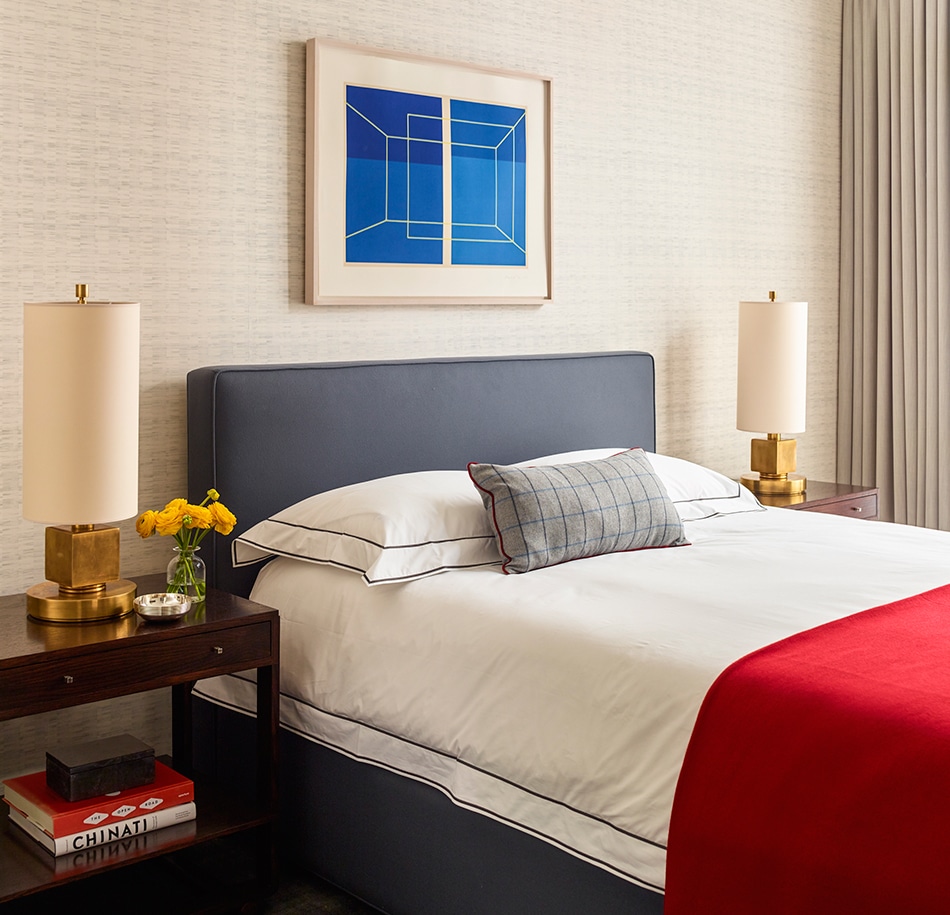 The guest room features hand-painted wallpaper and a custom bed flanked by a pair of chunky brass table lamps.

A very different spirit animates the guest bedroom. While the space is clean and calm, color plays a bolder role here. What does link the space to the rest of the apartment is the dance of geometries in the hand-painted white-on-white wallpaper, the chunky brass table lamps and, of course, the vivid blue mono-print by Kate Shepherd above the bed. “We loved doing a room that felt a touch more masculine,” Kapito says. “Those brass lamps make such an impact.”