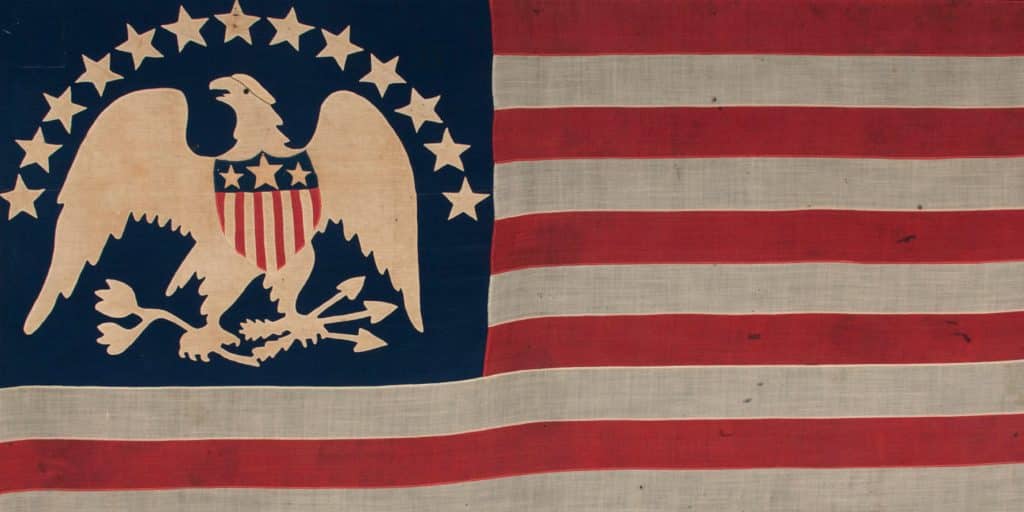 June 30, 2019American antiques dealer Jeff Bridgman curated “A New Constellation: A Collection of Historic 13-Star Flags,” on view through July 19 at Philadelphia’s Museum of the American Revolution. Top: Dating to the 1860s or ’70s, this hand-sewn and -appliquéd flag was likely made by Sarah McFadden at 198 Hudson Street in New York to fly on a Hudson River steamship. All photos courtesy Jeff Bridgman

It’s well-known that many early American flags had 13 stars, representing the 13 colonies that declared independence from Great Britain in 1776. Less well-known is that the United States never mandated a design for those flags. That’s what makes a new show at the Museum of the American Revolution, in Philadelphia, so compelling.

The 40 flags in “A New Constellation: A Collection of Historic 13-Star Flags — on view through July 21 — exhibit 32 different arrangements of stars, from a circle (the design associated, at least in myth, with Betsy Ross) to a pattern that seems to spell out “U.S.” In several, the stars form what might be a U (for “Union,” during the Civil War), unless it’s a tombstone or a beehive or the Ark of the Covenant or something else entirely. 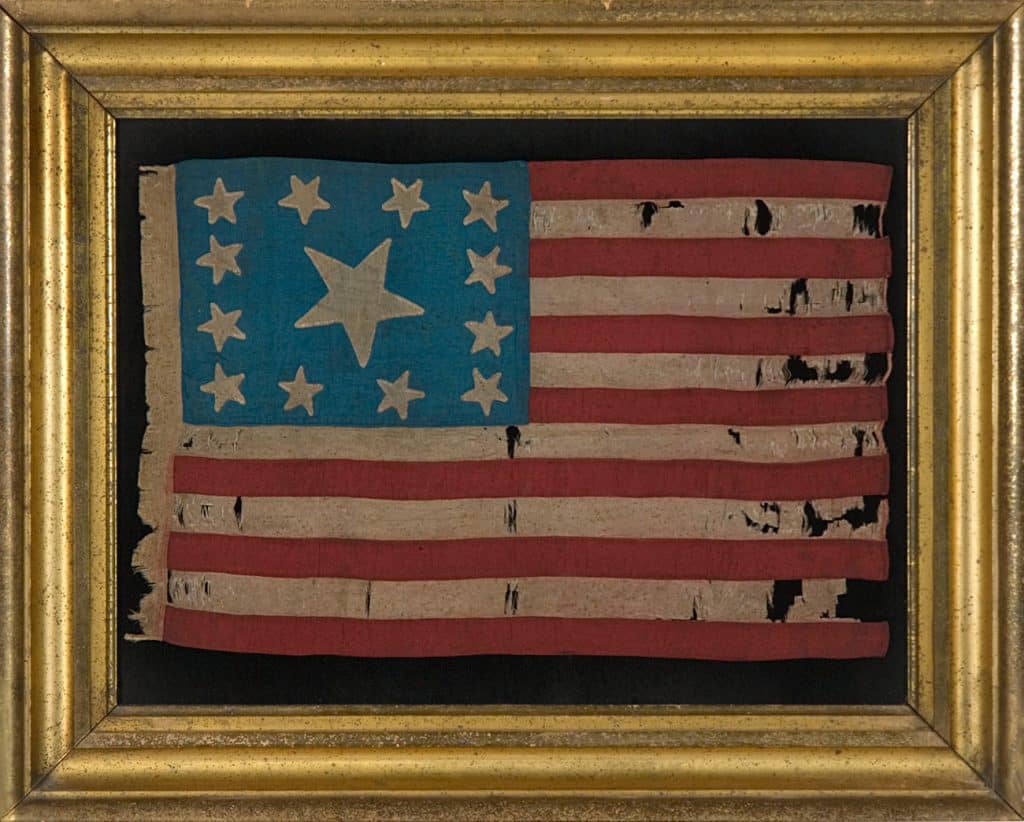 The layout of the 13 stars on this flag, dated between 1850 and 1876, is known as the Trumbull pattern, after John Trumbull, an artist and Revolutionary War soldier who served as George Washington’s aide-de-camp and painted the future first president alongside flags bearing this configuration.

All the flags are from Jeff R. Bridgman American Antiques, in a small town between Gettysburg and Harrisburg in central Pennsylvania. Last year, the museum approached Bridgman, a vexillologist (or flag expert), about curating a show. He came up with the idea of an exhibition devoted to 13-star flags, something he believes has never been done before. “Someday, people might look back on this show as historic,” Bridgman says. “That may sound self-serving, but it gives me chills.”

The arrangement of the stars in this flag, which was found in Gloucester, Massachusetts, and dates to somewhere between the 1830s and 1850s, may be a vague approximation of the letters U and S. 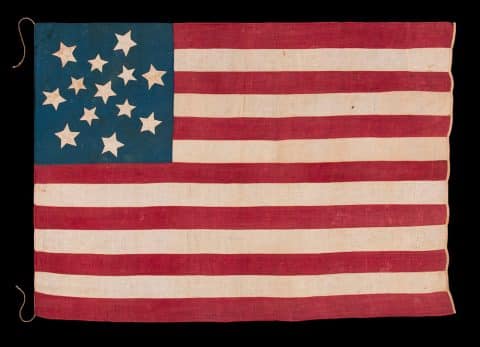 Dating back to the Civil War, this flag features stars of two different sizes arranged in a snowflake medallion.

American flags have fetched prices as high as $12 million, and Bridgman has sold examples for hundreds of thousands of dollars. For the show at the MAR, he gathered the most varied group of 13-star flags he could find. One has a portrait of Abraham Lincoln and the words “wide awake” — a reference to the Wide Awakes, a paramilitary group that supported Lincoln in the 1860 election. Others advertise products, from “Hop Bitters” to “Wilson Packing Co.’s cooked corned beef, ham or tongue, in 2, 4 or 6 pound cans.”

For most of the 19th century, words and images on American flags were commonplace. According to Bridgman, it wasn’t until the 1880s that people began to think of flags as sacred objects requiring protection. In 1905, Congress made it illegal to use national symbols for advertising. “That didn’t stop people from doing it,” however, notes the dealer. 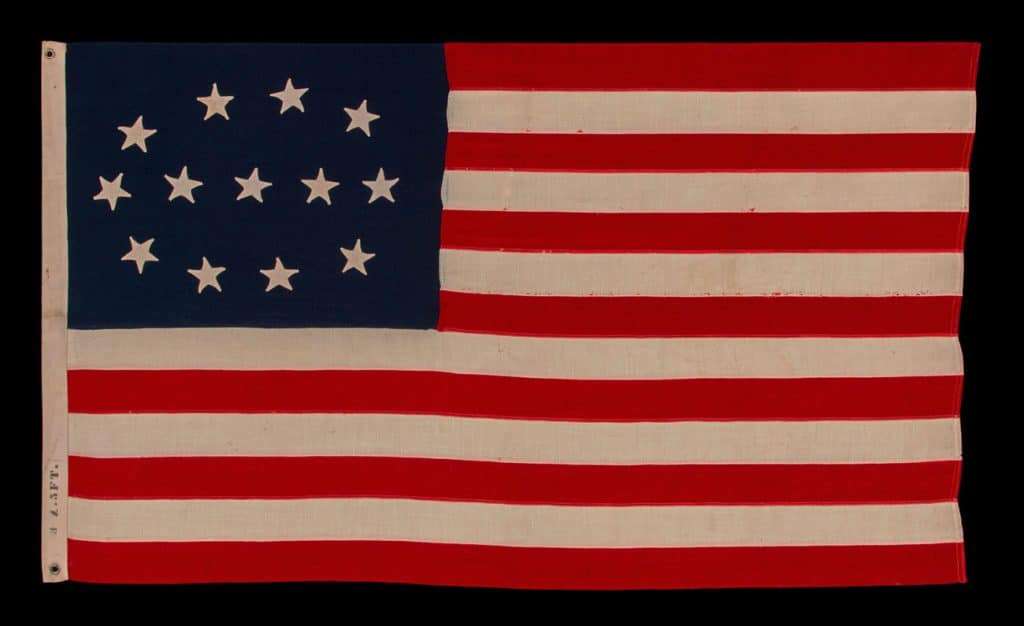 This arrangement — an ellipse of 10 stars with 3 in a row in the middle  —  has been found on just three surviving flags. The example shown here dates to the Civil War or the centennial of American independence, so between 1861 and 1876.

The 13-star flag was made the official U.S. flag on June 14, 1777, by an act of the Second Continental Congress. But very few 18th-century specimens exist, and even early-19th-century examples are rare. “The original purpose of the flag was to identify American naval vessels, and the fleet back then was very small,” Bridgman explains.

In the 1790s, Vermont and Kentucky became states, requiring the addition of two stars and making the 13-star flag obsolete. Examples continued to be made, however, for all kinds of reasons. Many were produced when the Marquis de Lafayette, who aided American troops during the Revolutionary War, toured the U.S. in 1824 and 1825 to a hero’s welcome. Others were made for Union Army regiments during the Civil War. They proliferated during the U.S. centennial in 1876 (10 centennial flags are in the MAR show). It wasn’t until 1912 that the flag design, at that point with 48 stars on the blue field (known as the canton), was standardized, in an executive order signed by president William Howard Taft. 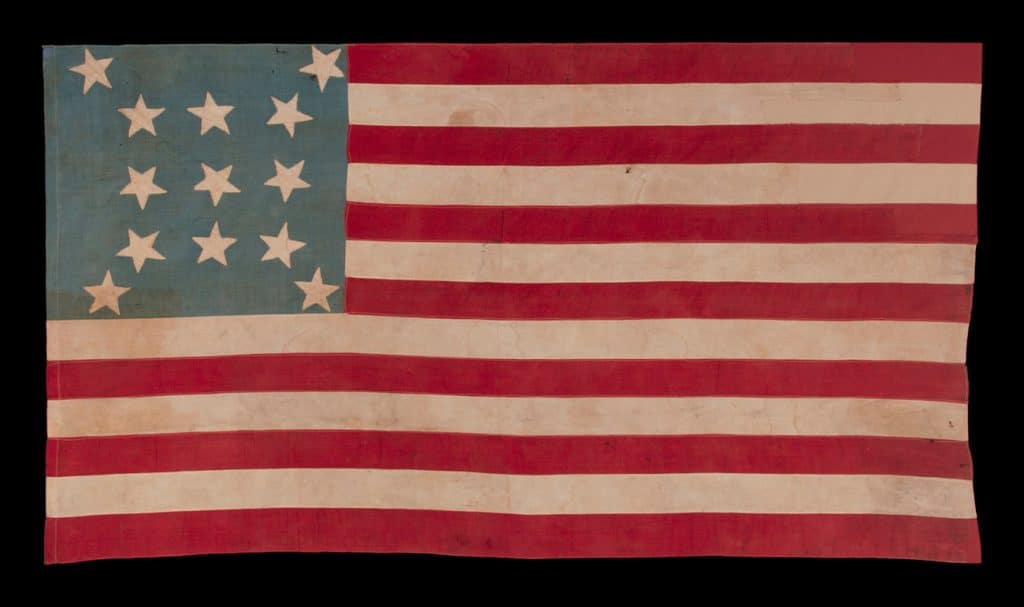 Likely from the centennial, this flag has a rare configuration of nine stars arranged in a central grid pattern with four additional stars outside the grid, one at each corner.

Bridgman is often asked if he has an example by Betsy Ross. But no flags by Ross are known to exist. The dealer does have ones by Ross’s granddaughter and great-granddaughter, who sewed flags in the East Wing of Independence Hall and sold them to tourists. 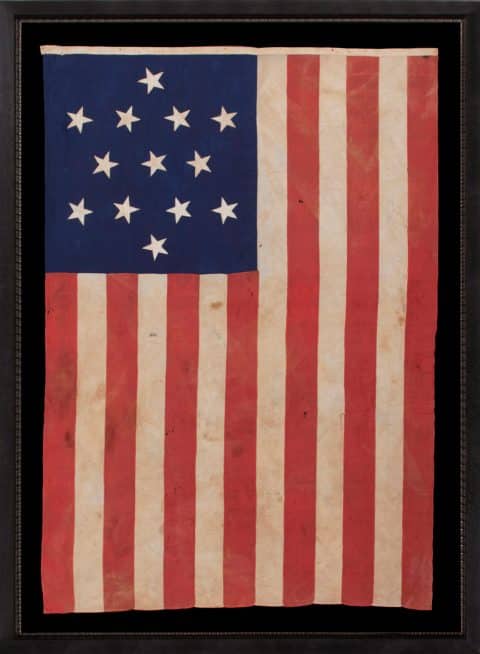 The 13 five-pointed stars of this flag, dating to between 1848 and 1860, were arranged to form a larger six-pointed star.

His favorite flag in the show is the earliest: a 30.5-by-41-inch wool example with 13 five-pointed cotton stars arranged to form a larger five-pointed star. Bridgman dates it (“conservatively,” he says) to the very beginning of the 19th century.

It has been repaired where fabric was lost to wear. Mends like this are not a problem, according to the dealer. “Unlike other types of textiles, such as quilts and samplers, which were made for indoor use, flags are utilitarian and expected to have been flown outdoors, sometimes in the mud and blood of war,” he explains. “This particular flag appears to have been extensively flown or hand-carried and shows all the signs of regular repairs, probably undertaken in the field.”

Rather than decreasing the value of the flag, Bridgman asserts, those flaws “tell a story” and may actually increase its artistic, emotional and monetary worth. 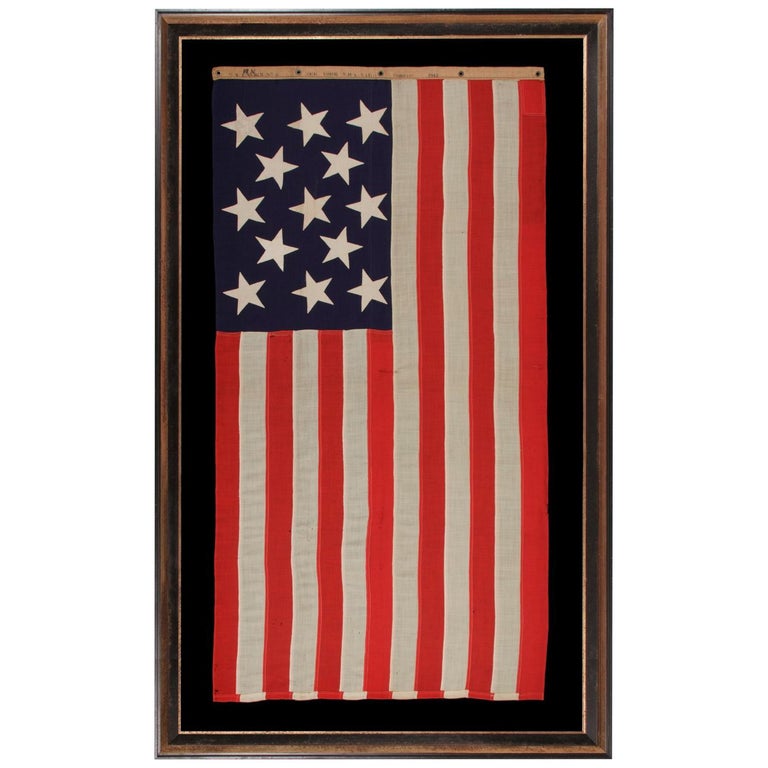 “One of the most frequent and influential uses of thirteen-star American flags during the nineteenth century was their display on small U.S. Navy boats. Experts disagree about precisely when the navy reverted to this star count for its smallest flags, which to them generally meant anything smaller than ten feet. It’s possible that their use was relatively continuous — if sometimes inconsistent — from the eighteenth century onward. This one was made at the Brooklyn Navy Yard in 1912.” 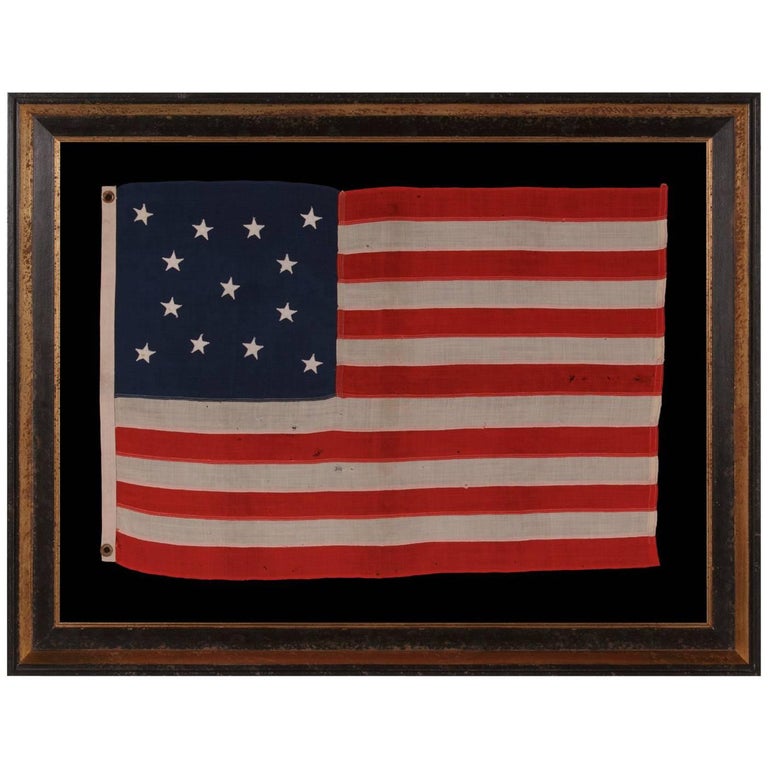 “In the eighteen nineties, commercial flag makers began for the first time to regularly produce small flags with a pieced-and-sewn construction, typically measuring between three and four feet in length. In doing so, they mirrored U.S. Navy practice by using thirteen stars instead of the full count. Because any flag that had ever been official remains official, thirteen-star flags are just as appropriate today as the fifty-star flag.” 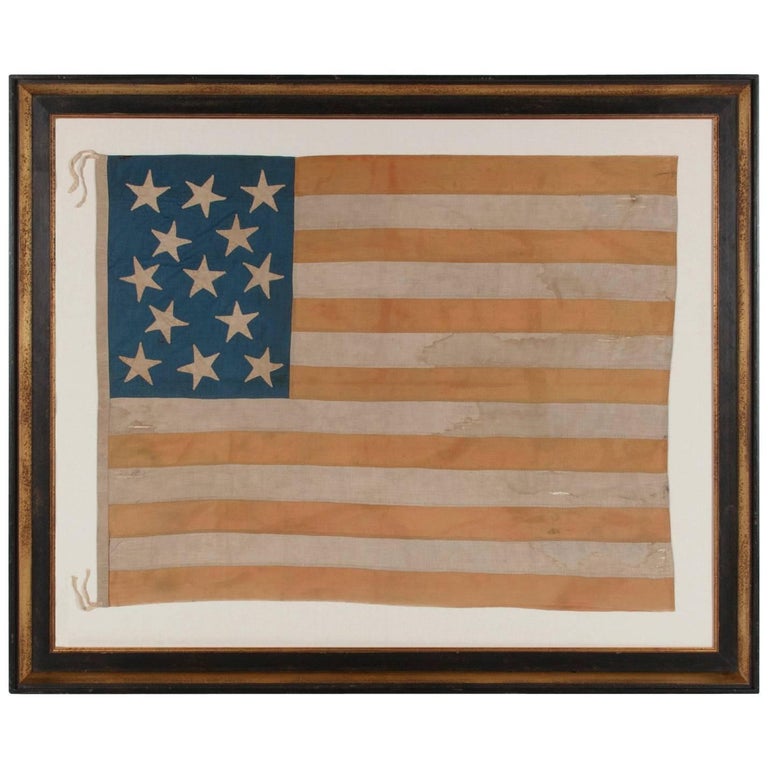 “This wonderful hand-sewn thirteen-star flag, with its vertically positioned canton, was made sometime between the closing years of the Civil War and the hundredth anniversary of American independence, in 1876.” 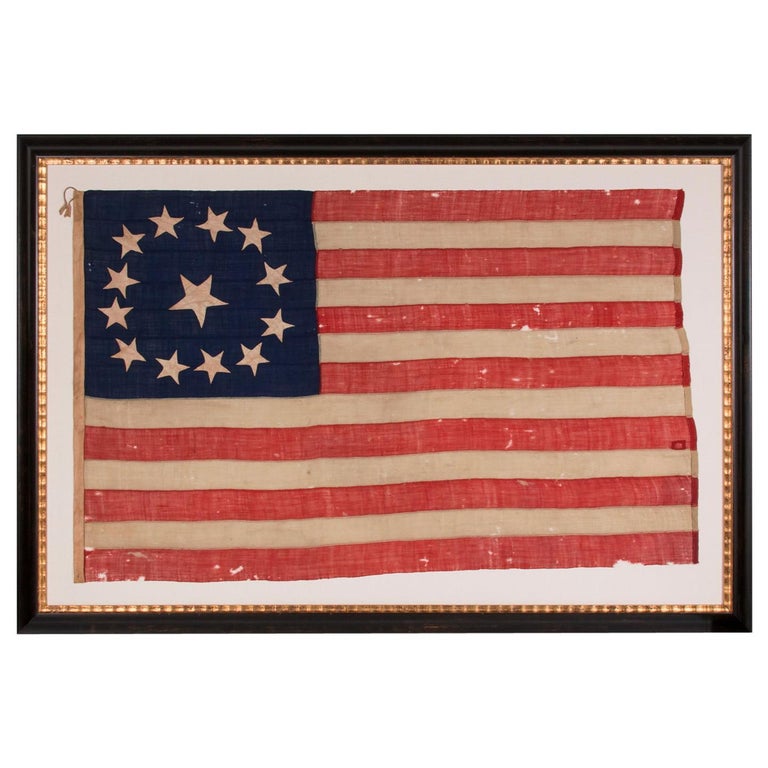 “The name given this pattern by collectors, Third Maryland, comes from a flag at the state house in Annapolis said to have been carried by the Third Maryland Regiment at the Revolutionary War battle of Cowpens. When flag expert Grace Rogers Cooper, of the Smithsonian, analyzed it, she discovered that it instead dated to the nineteenth century. This is a common situation among thirteen-star flags, due to a general misunderstanding of their use. This beautiful hand-sewn Civil War–period flag has stars arranged in that design.” 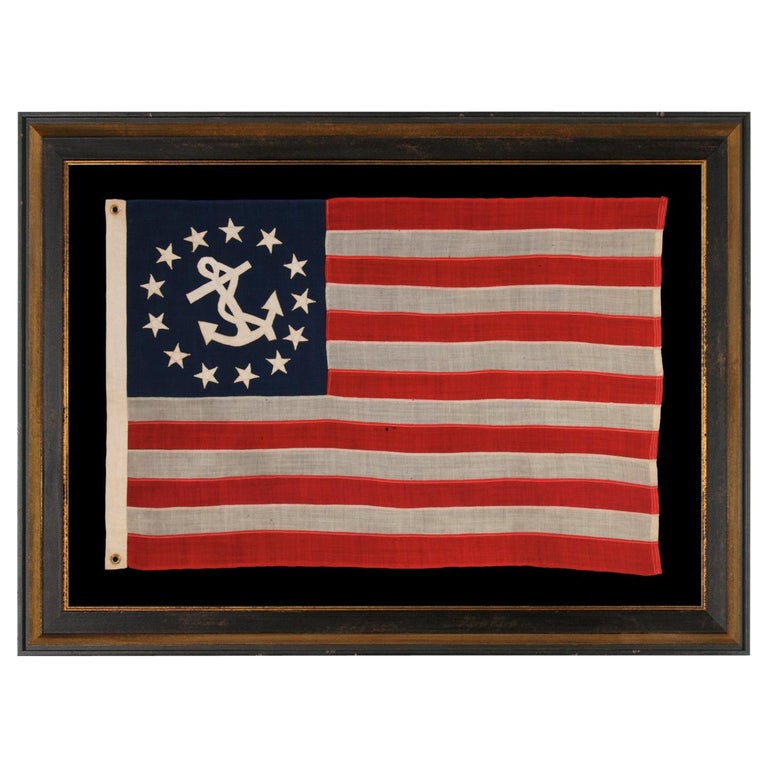 “The medallion-configuration, thirteen-star, thirteen-stripe flag with a canted center anchor entered into official use in 1848, following an act of Congress that made it the official signal for U.S. pleasure sailing vessels. The need for such a flag arose with the popularity of boating as a pastime for well-to-do Americans and as a competitive sport. Flying this flag allowed pleasure boats to bypass customs without inspection, and it remained on the books until 1980.” 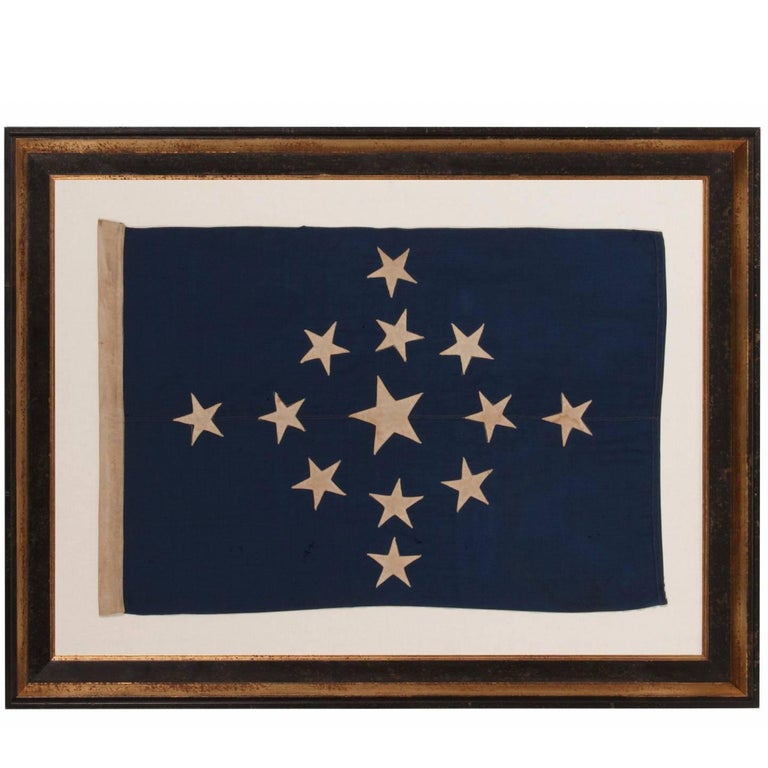 Shop Now
Jack with 13 stars in a superellipse variant of a diamond configuration, 1880–95

“A jack is a flag traditionally flown on a navy ship while in port or at anchor. This particular example is the only one I have ever encountered with thirteen stars, as well as the only example of this thirteen-star arrangement that I have ever seen on a flag. Made between 1880 and 1895, it was intended to fly on a Hudson River steamer.” 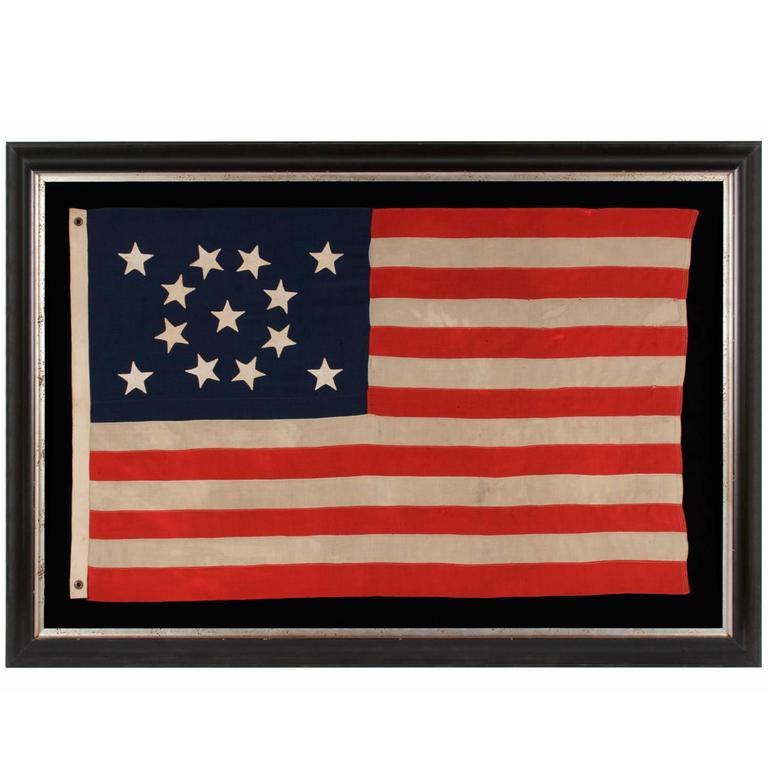 “The medallion configuration of stars was popular at the time of the 1876 centennial of American independence. Beautifully hand-sewn stars are presented here in that design on a thirteen-star flag of the centennial era.” 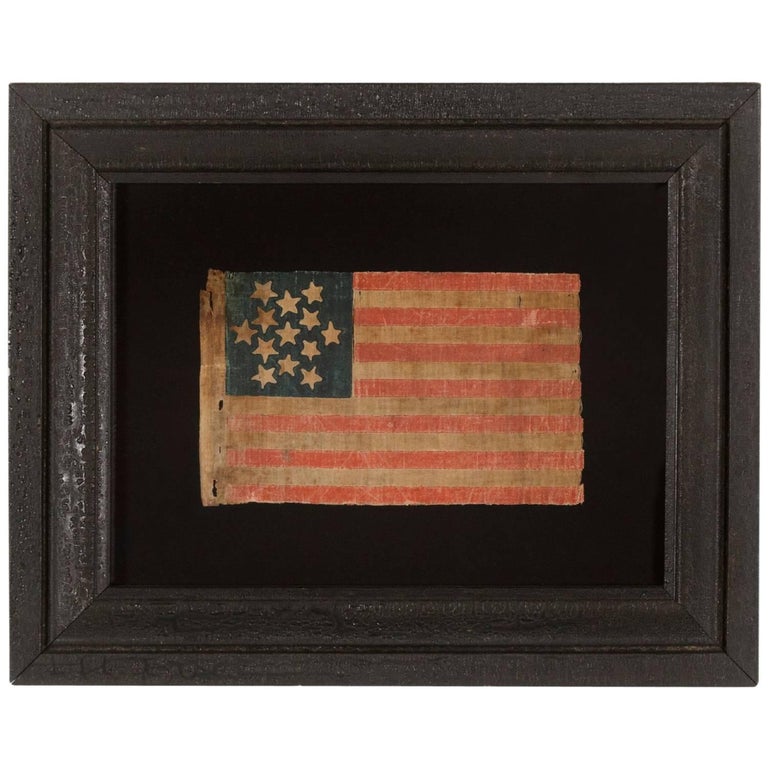 “The stars on this parade flag, made in the middle of the nineteenth century, are arranged in a six-pointed Great Star. The Star of David–like pattern replicates the stars on the Great Seal of the United States, most readily viewed on the back of the dollar bill.”