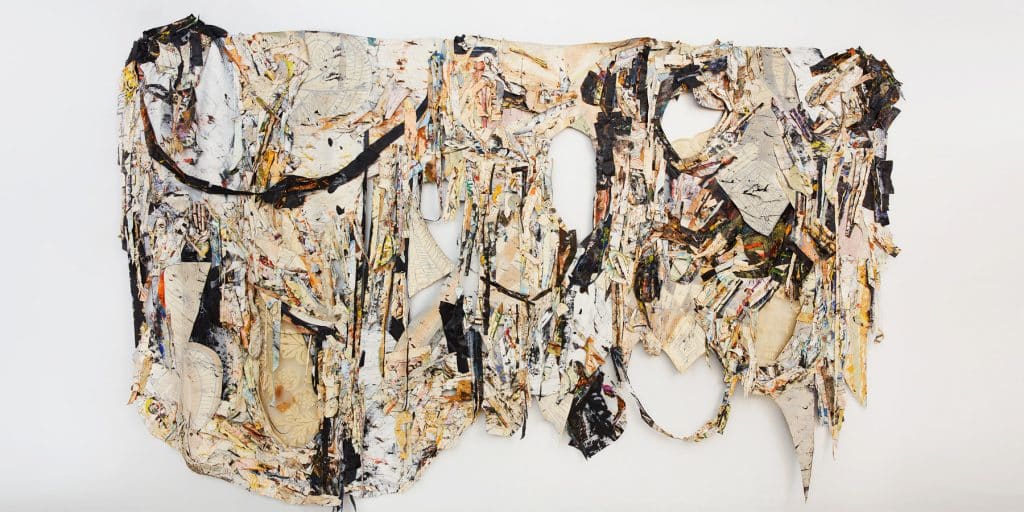 March 10, 2019I’ve never been a storyteller — I’m more a materialist,” says Angel Otero. The 37-year-old artist, whose show “Milagros” runs through April 20 at Lehmann Maupin, in New York, has become known over the past decade for his experimental, process-oriented approach to abstract painting. Yet embedded in the DNA of his works are specific, albeit nonlinear references to his upbringing in Puerto Rico and the pantheon of artists he admires. He likes how abstraction can embrace the personal and the art historical simultaneously.

“Milagros,” a show of new work by artist Angel Otero — seen here in his Brooklyn studio — is on view at New York’s Lehmann Maupin gallery through April 20 (photo by Elisabeth Bernstein). Top: Sarcophagus (Eat the Meat and Spit Out the Bones), 2019. All photos by Matthew Herrmann, courtesy of the artist and Lehmann Maupin, New York, Hong Kong and Seoul, unless otherwise noted

After receiving his MFA from the Art Institute of Chicago in 2009, Otero moved to New York, where he pioneered a method of painting involving Plexiglas. He would apply layer over layer of paint, often riffing off the works of Abstract Expressionists like Jackson Pollock, Joan Mitchell and Willem de Kooning, sometimes mixing in representations of objects in his grandmother’s home or familiar landscapes. He would then scrape off the drying oil paint in a single “skin,” as he likes to call it, and slide this — wrinkled and distorted — onto adhesive applied across a stretched canvas. The process conflated and obscured his direct references in an abstract language entirely his own.

“I was creating this sculptural form, but I was still in the room with the painters,” says Otero. He showed his first fully realized canvas in this mode in a 2010 group show at Lehmann Maupin, which sold a similar piece of his two years later to the collector Tom Hill.

In recent years, Otero has been cannibalizing paint skins that he had deemed unsuccessful and piled like animal hides on palettes all around his warehouse studio in Bushwick, Brooklyn. “I started cutting shapes out of them and making compositions on the floor,” says the artist, who wired these remnants together and stapled the tops of the resulting collages to wooden bars, so they hung like tapestries. “I was tired of the limitations of the canvas.” 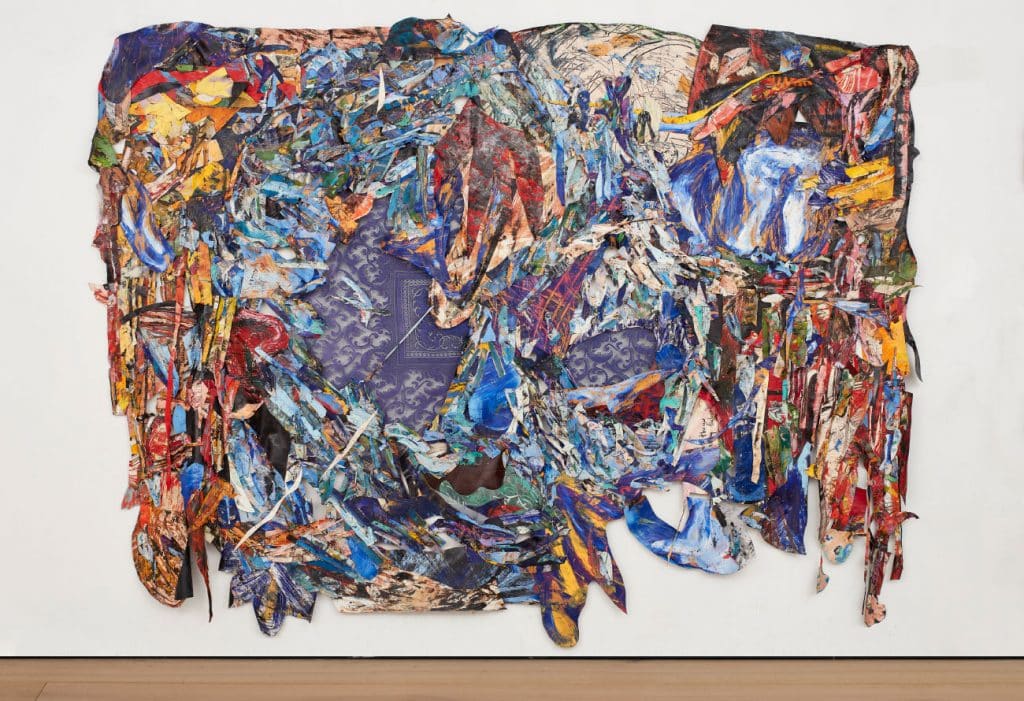 The works in Otero’s new series — including Dreaming in Blue (To Arnaldo Roche), 2019, here — are collages composed of “skins” he created by applying oil paint in layers to sheets of Plexiglass and sliding it off when it was nearly dry. The skins Otero used for these pieces were ones he’d rejected when creating previous paintings. He recycled them into something new that blurred the line between painting and sculpture.

Otero debuted these irregularly shaped works, which dangle and cascade across a wall, in 2017 at the Bronx Museum of the Arts, where he is now a board member. In his new works at Lehmann Maupin, he has incorporated found objects for the first time, including handmade lace of the sort his grandmother used to crochet and teardrop crystals like those that hung from her chandelier.

“These objects create a bridge to my past and in some way make me feel safe,” he says. “They blend into the paintings but give you a flash of something that is recognizable.” 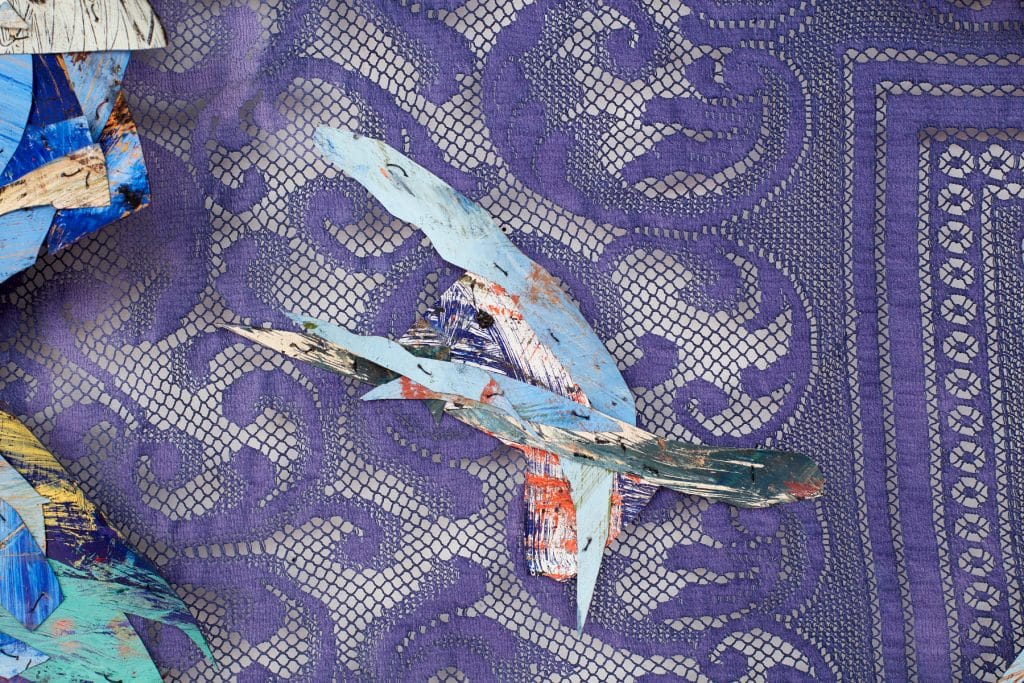 In some of the new paintings, Otero has, for the first time, mixed the skins with found objects and fabrics that recall his youth in Puerto Rico. Dreaming in Blue features a bit of lace of the type his grandmother used to crochet.

The show’s title, “Milagros,” refers to the religious folk charms that people in his homeland would affix to sacred objects when praying for their wishes to be fulfilled. Otero himself owns a small figure covered in rusted metal charms, passed down from the great-grandmother of his great-grandmother. The craft involved in making his new paintings — the collecting of fragments, the ornamenting with actual objects — makes them feel somehow akin to these devotional heirlooms “from a metaphoric perspective,” he says. 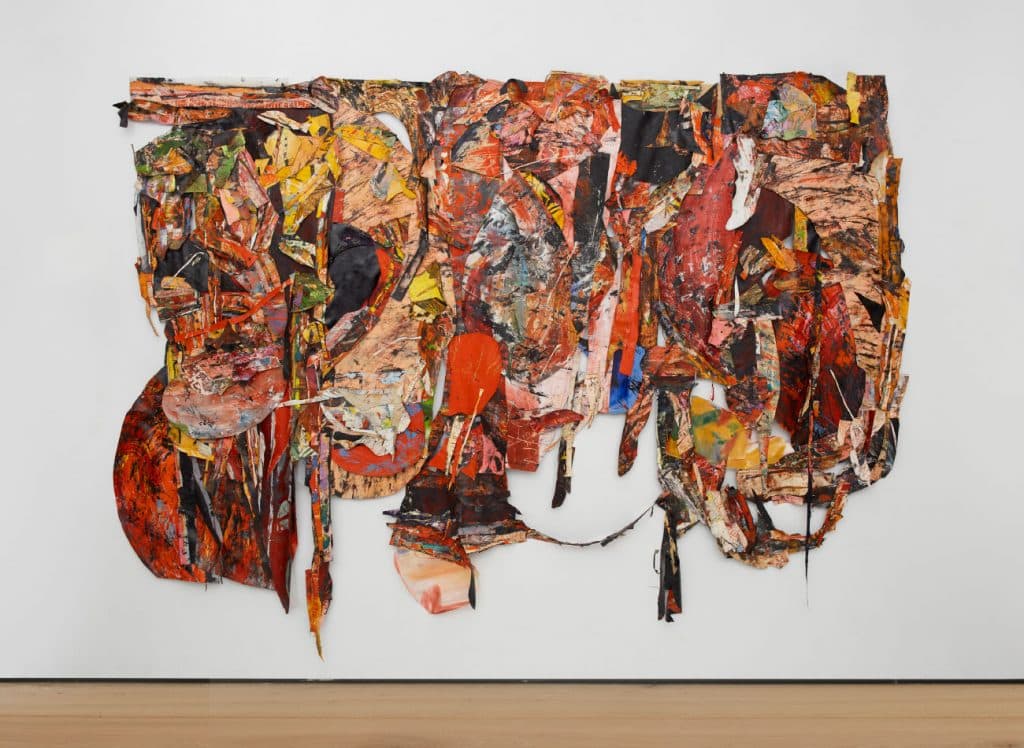 “I started cutting shapes out of them and making compositions on the floor,” says Otero, describing his process of working with the previously rejected skins, which he’d piled around his studio. Seen here is Untitled, 2019.

Otero also sees these works in conversation with those of other artists who have stepped out of painting’s two-dimensional rectangles. Among these are Sam Gilliam, a pioneer in taking canvases off their stretcher bars and draping them sculpturally, and Elizabeth Murray, whose shaped paintings are cobbled together from biomorphic reliefs.

Puerto Rico’s devastation by Hurricane Maria in 2017 and its subsequent regeneration echo in the paintings as well. “These to me feel quite chaotic,” says Otero, who assembles his cutout remnants like gestural brushstrokes, clustered in swells and eddies against bigger fields of color. “The situation in Puerto Rico was quite an anxious moment for me. It really did expose itself in the work.” 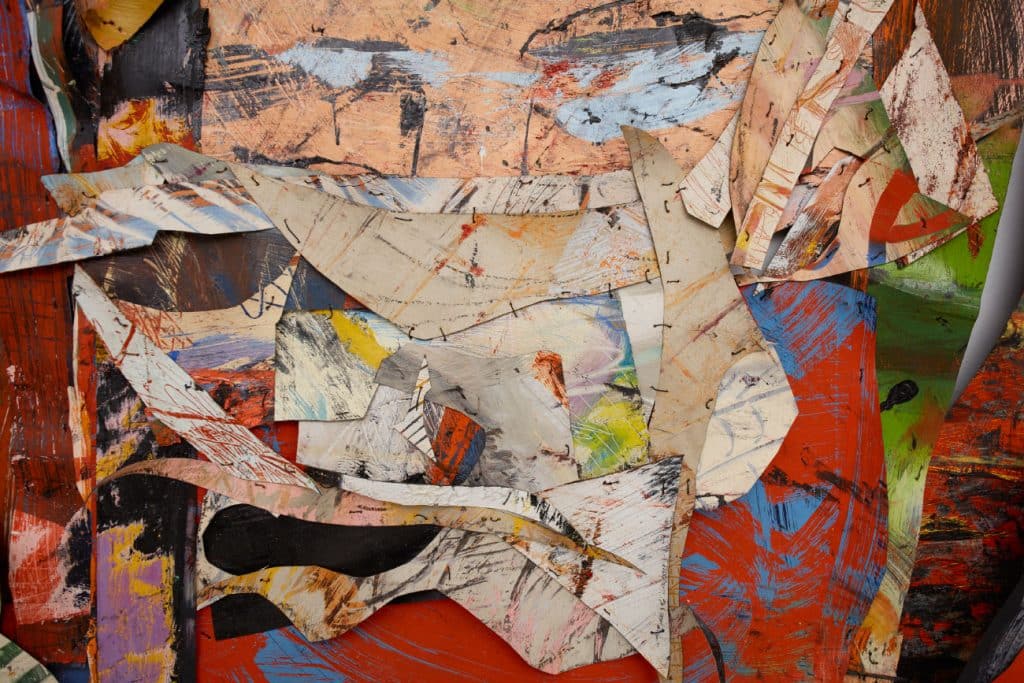 Of his continued move toward three-dimensionality, Otero says, “I was tired of the limitations of the canvas.” Here, a detail from Untitled.

Born in Santurce, Puerto Rico, just east of San Juan, in 1981, Otero was raised largely by his grandmother while his parents worked, his father selling insurance, his mother as a bank teller. From a young age, he loved to paint and draw. He remembers a friend of his mother’s showing him a book about Pollock. “It shocked me that I could paint drips and not be judged technically if it didn’t look like a portrait,” Otero says. He studied art at the University of Puerto Rico but dropped out at the urging of his father, who wanted him to pursue something more practical. 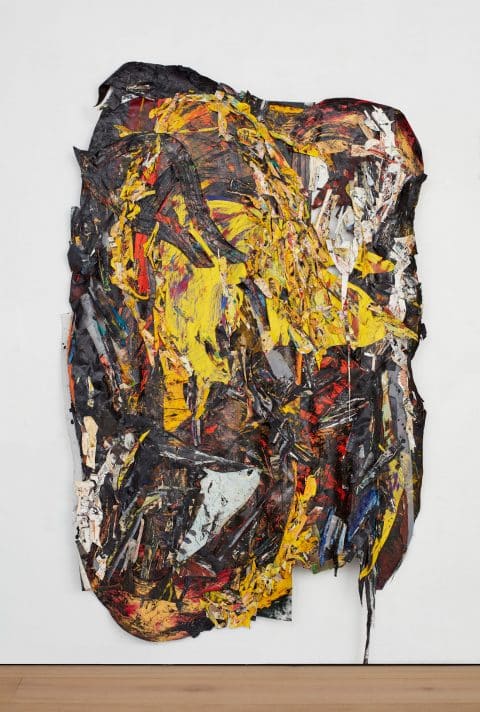 Once he achieved the desired effect with the assembled skins, he wired the remnants together and stapled the tops of the resulting collages to wooden bars, so they hung like tapestries, as they do in Ramblin, 2019

“I became an insurance agent at twenty-one on the day of my birthday,” says Otero, who continued to paint by night. “I was not a good salesperson.”

A professor at the university who was an alumnus of the Art Institute in Chicago recommended him to that school’s admissions department, which was sending an officer to Puerto Rico to interview  candidates. “They asked me for my portfolio, and I actually arrived there with my paintings in a pickup truck and had my friends from the neighborhood carry them in,” he says, laughing. He was offered a half scholarship. “It was a new beginning,” says Otero. He arrived in Chicago at age 23 in a snowstorm, later receiving a full ride to stay on for graduate school.

Now, Otero is returning home with plans to renovate a satellite studio in a third-floor warehouse space in San Juan. “After the hurricane, I’ve been wanting to go back and see how making art there can feel,” says the artist. He envisions building a sort of art and culture incubator and education space on the island, and plans to commute there from his Brooklyn studio every couple of months. 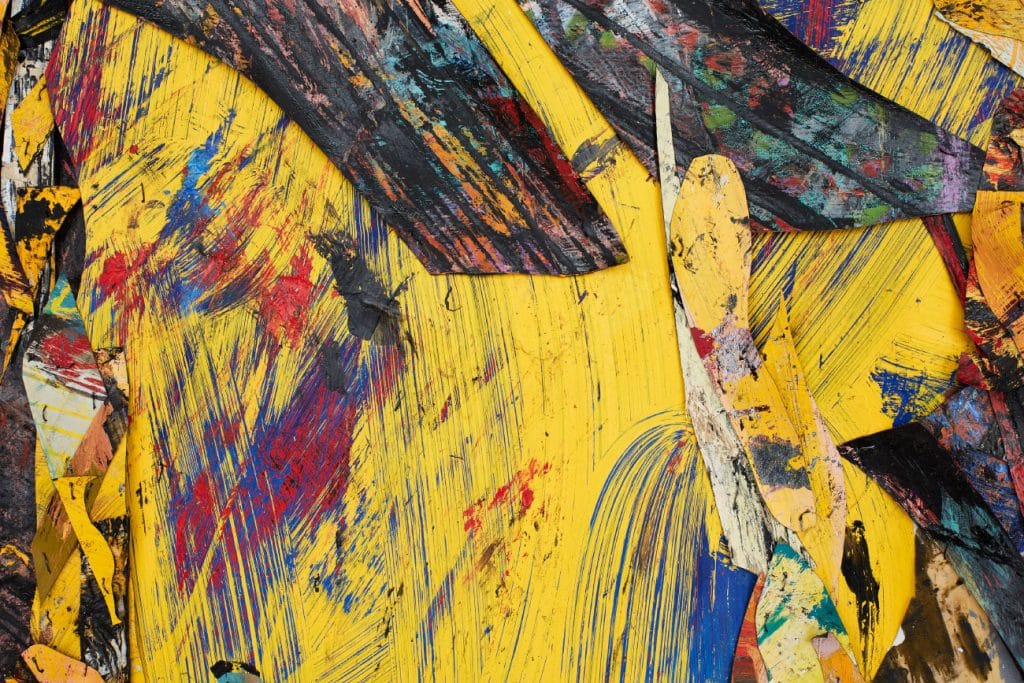 The exhibition’s title, “Milagros,” refers to the Catholic charms that people in Otero’s native Puerto Rico would affix to sacred objects when praying for their wishes to be fulfilled. Seen here is a detail from Ramblin.

“I want to invite friends and hear ideas about things that could happen in my space that are outside my art making,” he says. “Creativity is needed out there right now from a younger generation, and I want to be part of something that contributes.”