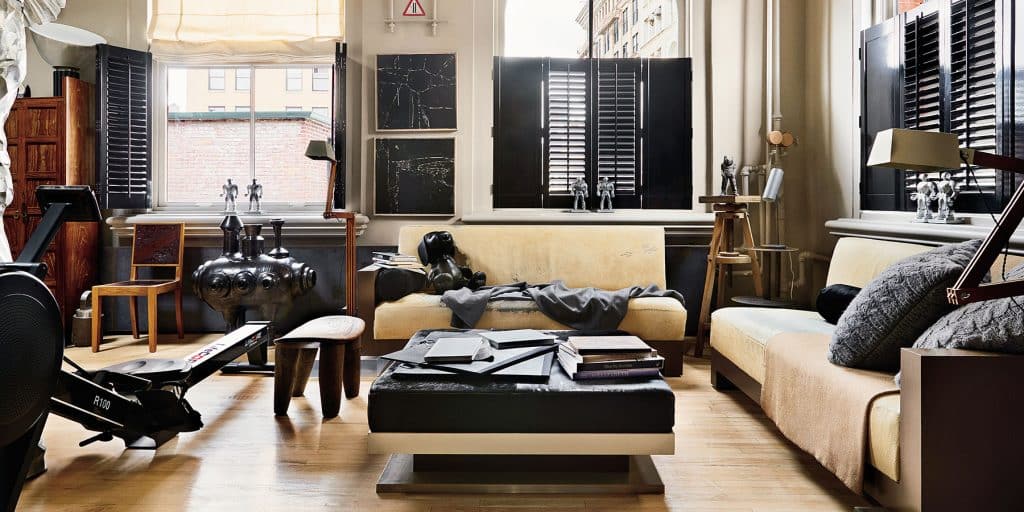 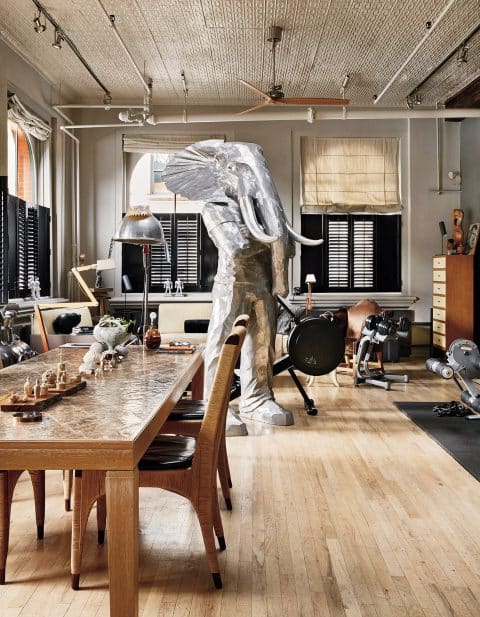 April 21, 2019Anthony Iannacci’s new book, New York Design at Home (Abrams), invites readers inside the residences of top architects and interior designers based in the Big Apple, including Bill Sofield, the living and dining area of whose Soho loft is seen at top and above. The apartment features a table, chairs and sofas of Sofield’s own design, lacquered louvered shutters and an elephantine sculpture by Cyrille André. All photos by Noe DeWitt

After a decade of explosive residential real estate growth in New York, I found myself wondering: How are the city’s design experts — who include some of the country’s most sought-after architects and decorators — living these days? As someone who spends his professional life producing books on design, my interest in this was neither casual nor passing. So, I decided to devote my most recent volume, New York Design at Home (Abrams), to the topic.

Designers’ own residences have long been seen as laboratories in which they can explore and experiment, absent the demands imposed by clients. As a result, the houses they create for themselves are often more layered and offer greater insight into their styles, interests and identities. After touring the homes of many architects and designers, I concluded that the most interesting ones — not least the 27 included in the book, which was designed by Carrie Hunt and features new photography by Noe DeWitt — were exuberant celebrations of the particularities of the spaces, the buildings and the neighborhoods they occupied, as well as their residents’ aesthetic. Each is an object lesson in how the constraints of context can successfully combine with a fearless expression of personal style.

As I stood in the living room of Bill Sofield’s Soho loft, for example, he pointed out that the colors he had chosen — deep shades of gray, putty and terracotta — weren’t his favorites but rather inspired by the hues of the cityscape seen through his many windows. Sofield’s own style comes through in a certain disregard for traditional delineations of space: His living area is peppered with gym equipment; his hallway also serves as a closet. Disparate functions and the objects that support them overlap and flow into each other much the way the various parts of an individual’s personality coexist. 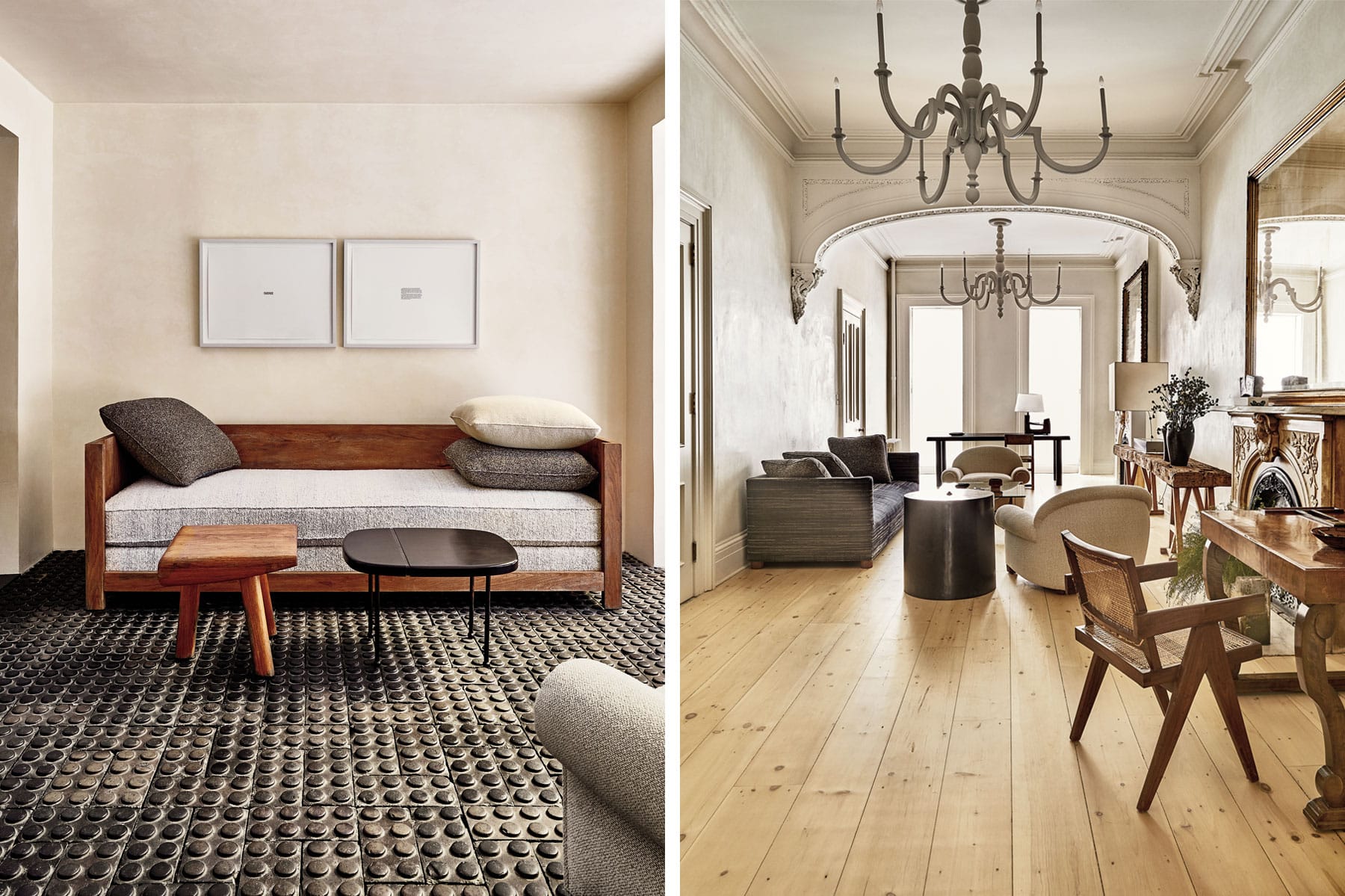 In her Chelsea townhouse, Juniper Tedhams lined the floor of the kitchen’s seating area (left) with black cattle-yard bricks that she sourced from the UK; the furniture, made by Erik Gustafson, is of her own design. The living room (right) contains a Pierre Jeanneret armchair. Throughout the house, Tedhams painted the walls and the original moldings, uncovered in the renovation, a uniform neutral white.

When Juniper Tedhams removed the drop ceiling in the parlor floor of the Italianate townhouse she shares with her sister in Chelsea, she discovered what some might have considered a jackpot: beautifully intact decorative moldings. Tedhams herself is usually averse to this type or architectural detailing, but instead of removing it, she found a happy medium: She painted the moldings and the walls a uniform white and added custom ceiling light fixtures that reflect the shapes of the original decorative details, acknowledging the building’s history. 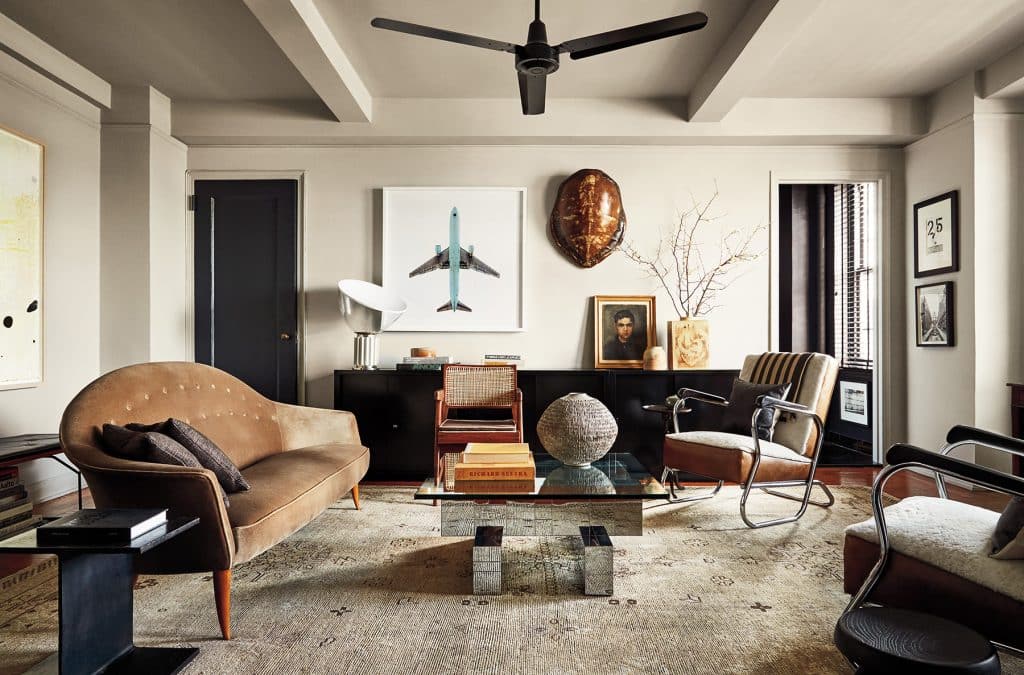 A new book by Anthony Iannacci features the residences of 27 architects and interior designers who call New York City home, including the West Chelsea apartment of Neal Beckstedt. In Beckstedt’s living room, a Kerstin Hörlin-Holmquist Paradise sofa sits next to a Ward Bennett side table and faces a Paul Evans Cityscape coffee table. 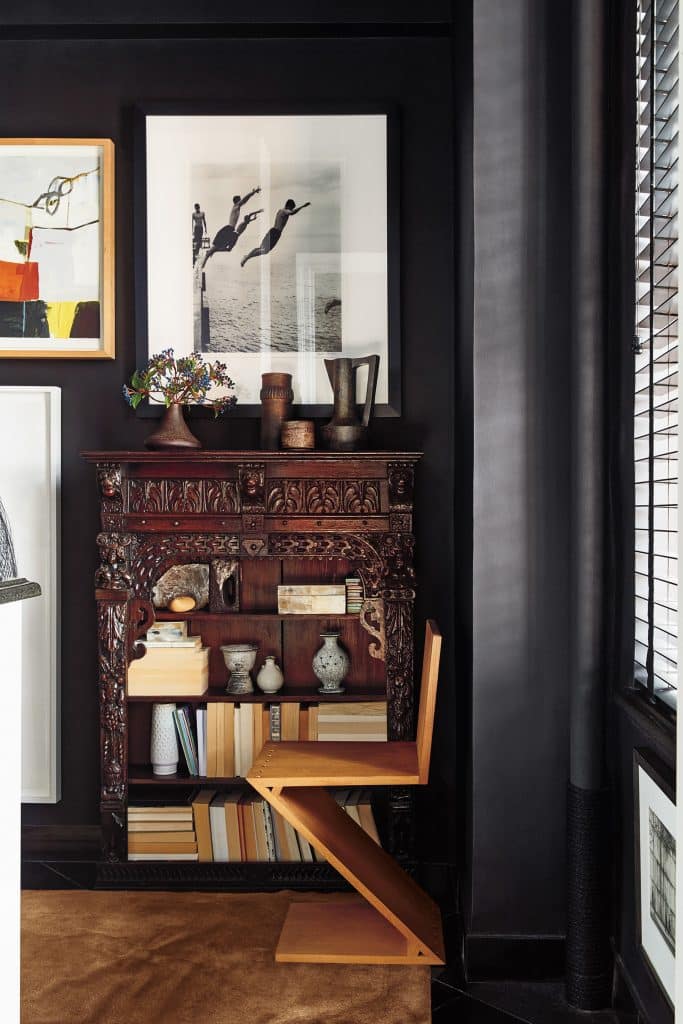 A Gerritt Rietveld Zig-Zag chair sits in front of carved bookshelves in the Beckstedt apartment. 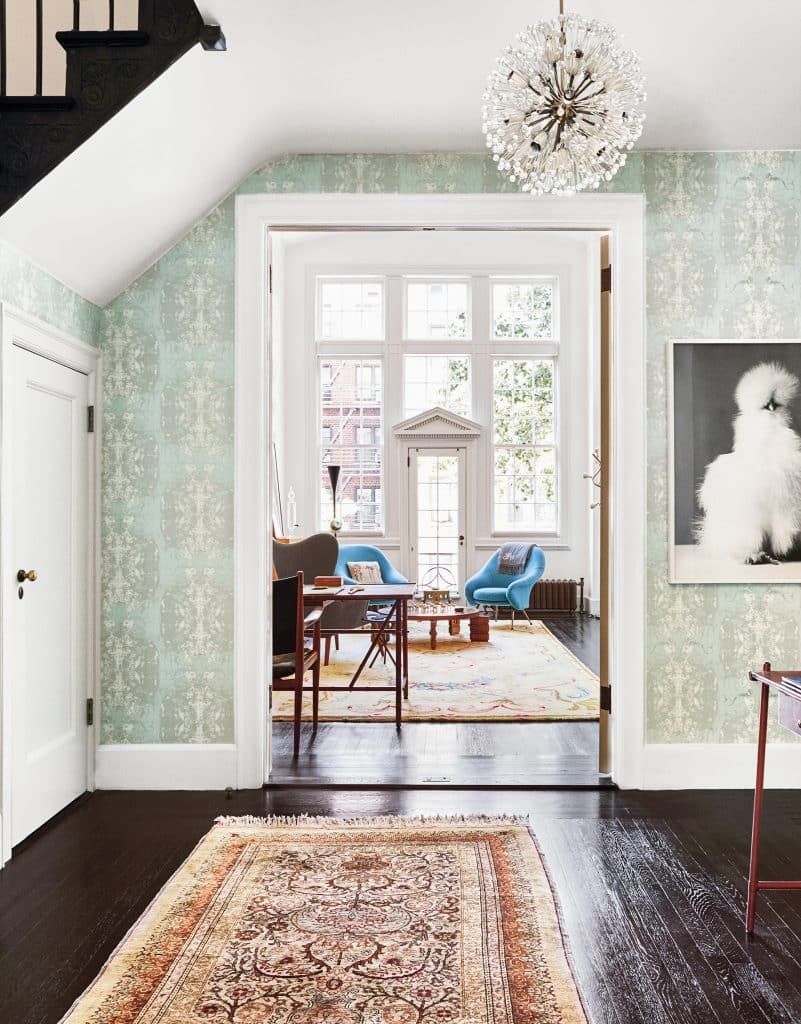 Neal Beckstedt, for his part, was inspired to see beyond his West Chelsea apartment’s limited square footage by its rich 1930s details, such as wood floors, brass door hardware, Bakelite plumbing fixtures and beautifully aged bathroom tiles. He painted the kitchen and bathroom a warm black and furnished the home with a mix of vintage furnishings, like the living room’s Kerstin Hörlin-Holmquist paradise sofa and Paul Evans Cityscape coffee table. To these he added contemporary art and pottery — a Matthew Brandt photograph from Yossi Milo Gallery, for example, and a Clyde Burt ceramic vessel. He also designed and installed a Murphy bed. Together, these various gestures celebrate the history of the apartment while asserting Beckstedt’s personal style.

Billy Cotton chose a buttery shade of pale yellow for every surface, including the floors, of his Chelsea apartment. The choice was not driven by Cotton’s undying allegiance to the hue but because it makes a space that suffers from a dearth of daylight feel flooded by sun. He kept the furnishings minimal. In the living room, he had a banquette-like sofa created to span the apartment’s width; he also installed one of his Pick Up Stick lighting fixtures and a table he had made from reclaimed wood, along with a collection of mismatched 19th-century chairs. 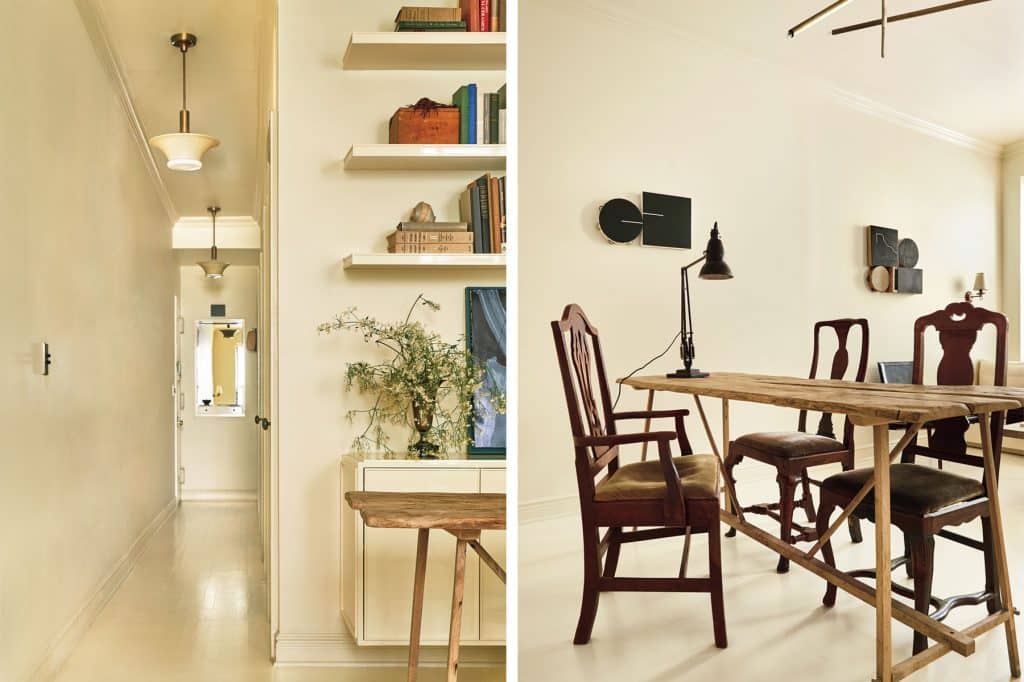 Billy Cotton made his cozy Chelsea one-bedroom feel larger by painting every surface — walls, ceilings, floors, moldings — and some of the furniture a buttery soft yellow. In the dining area, 19th-century chairs surround a vintage-looking table of his own design, made from reclaimed wood. His Pick Up Stick chandelier hangs above.

Brian Sawyer’s Greenwich Village apartment in a late-Victorian-era building reads like a stage set for a play about a dapper 1890s Manhattan bachelor. This may not be Sawyer’s style, but he wanted to honor the apartment’s essence while adding his own aesthetic. When he found the place, it was in serious disrepair. But its working fireplaces and massive skylight, plus the building’s late-19th-century construction, captivated him. Before gutting the space, he inventoried the Victorian details and researched the other apartments, then created new details based on his findings. Still, he wasn’t so beholden to history that he banished his own style. The dining room hosts a taxidermy collection inherited from his great-uncle as well as a table he designed based on a Maison Jansen model, and the living room features a modern button-tufted sofa and a coffee table of his own design. 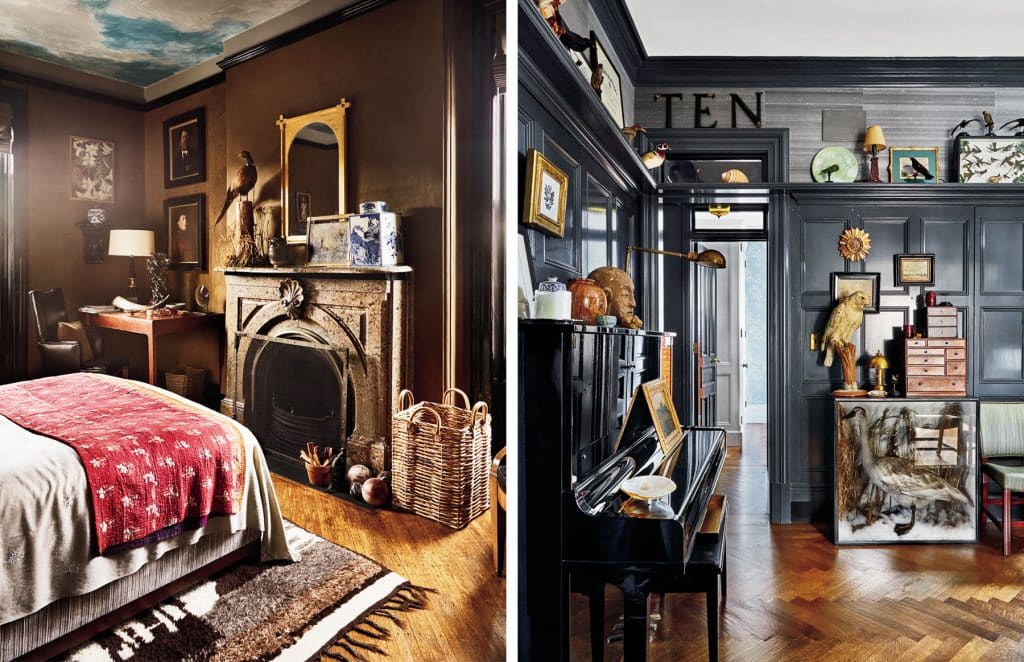 Left: Brian Sawyer covered the walls in one of the bedrooms of his Victorian-era apartment in Greenwich Village with a light-absorbing, chocolate-colored Ultrasuede. Artist Tom Borgese painted the ceiling to match an existing decoration on the ceiling of the bathroom, itself a reproduction of work by Caravaggio in Rome’s Villa Aurora. Right: Sawyer made his home a showcase for the taxidermy collection he inherited from his great-uncle.

Ellen Hanson also lives in a building with historic pedigree. Designed by the architect John B. Peterkin in the great real estate boom of the 1920s, the grand Fifth Avenue structure features such traditional details as a lobby encased in veined and figured marbles and an elevator adorned with floral patterns of inlaid woods. In contrast, Hanson might best be described as a modernist, her work for others even calling to mind minimalism. Here, though, she felt compelled to incorporate the building’s classical magnificence into the more contemporary space she created for herself. While her collection of mid-century furnishings and art — including a Louise Nevelson work over the fireplace — clearly departs from the aesthetic of the edifice, Hanson has connected her private space unforgettably to its surroundings. For her foyer, she had deep baseboards and door frames carved from dramatically veined black marble; they read like an umbilical connection to the particulars of the building.

Long before he bought his Greenwich Village duplex, architect Michael Haverland had admired the building in which it sits, finding it notable for its floor plans, proportions and fenestration. When he moved into the 1925 structure, designed by architect Harvey Wiley Corbett, of Helme & Corbett Architects, the work he did on his apartment was grounded in a desire — despite his otherwise modernist leanings — to leave as much of its original detailing as possible, including a steel staircase and plaster ceiling medallions. 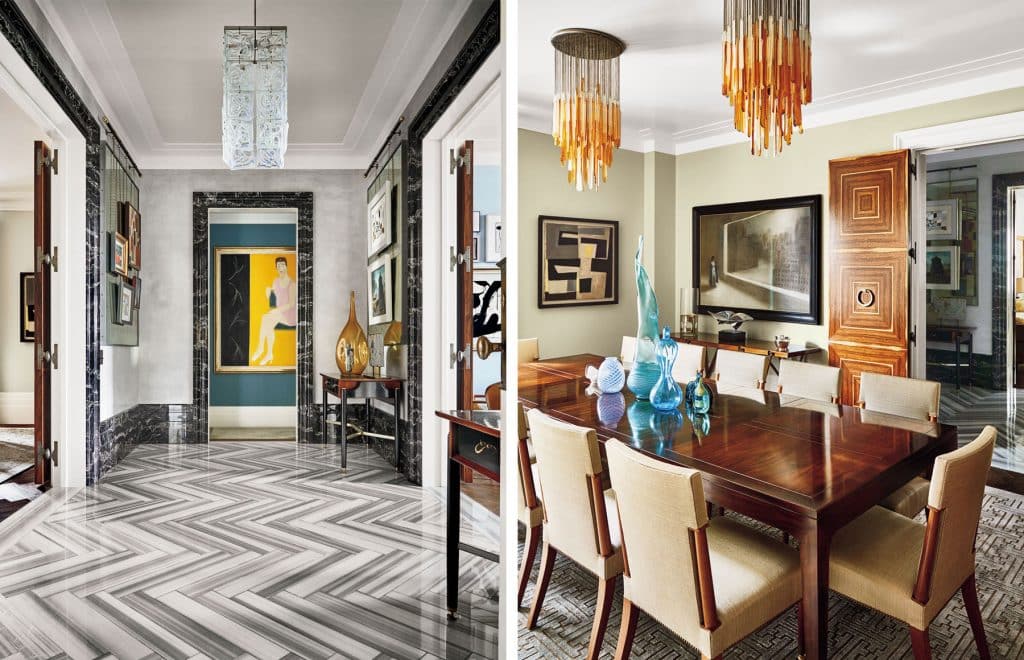 Left: Ellen Hanson’s art-filled Fifth Avenue apartment features a Craigie Aitchison painting (on the back wall), plus other works hung salon style and over antique mirrors. Right: In her dining room, inlaid doors and deep mouldings help create what she calls a cozy, elegant setting for a mix of mid-century art and furnishings, including Mazzega Murano chandeliers from John Salibello.

The double-height living room presented his biggest challenge, as he found that its expanses of white walls distracted from the the vaulted ceiling. Haverland explored many options before realizing that the space had offered a solution all along. He continued an extrapolated version of the ceiling’s circular and octagonal medallions down the walls, reducing their size as they descended. That simple gesture creates an animated backdrop for his collection of vintage furnishings and contemporary art while inviting guests to relate the many more-modern pieces — a Jacques Adnet desk, a Louise Lawler artwork, a Jean Royère mirror — to the unique personality of the historic building.

Each of the homes I have included in New York Design at Home marries its designer’s style with his or her acute and personal understanding of its context. I hope the book will illustrate the creative ways in which context can be interpreted, and will inspire readers to work with — and never against — the unique historic and architectural attributes of their spaces. As these residences demonstrate, doing so can help you craft welcoming environments and a timeless, grounded sense of home.