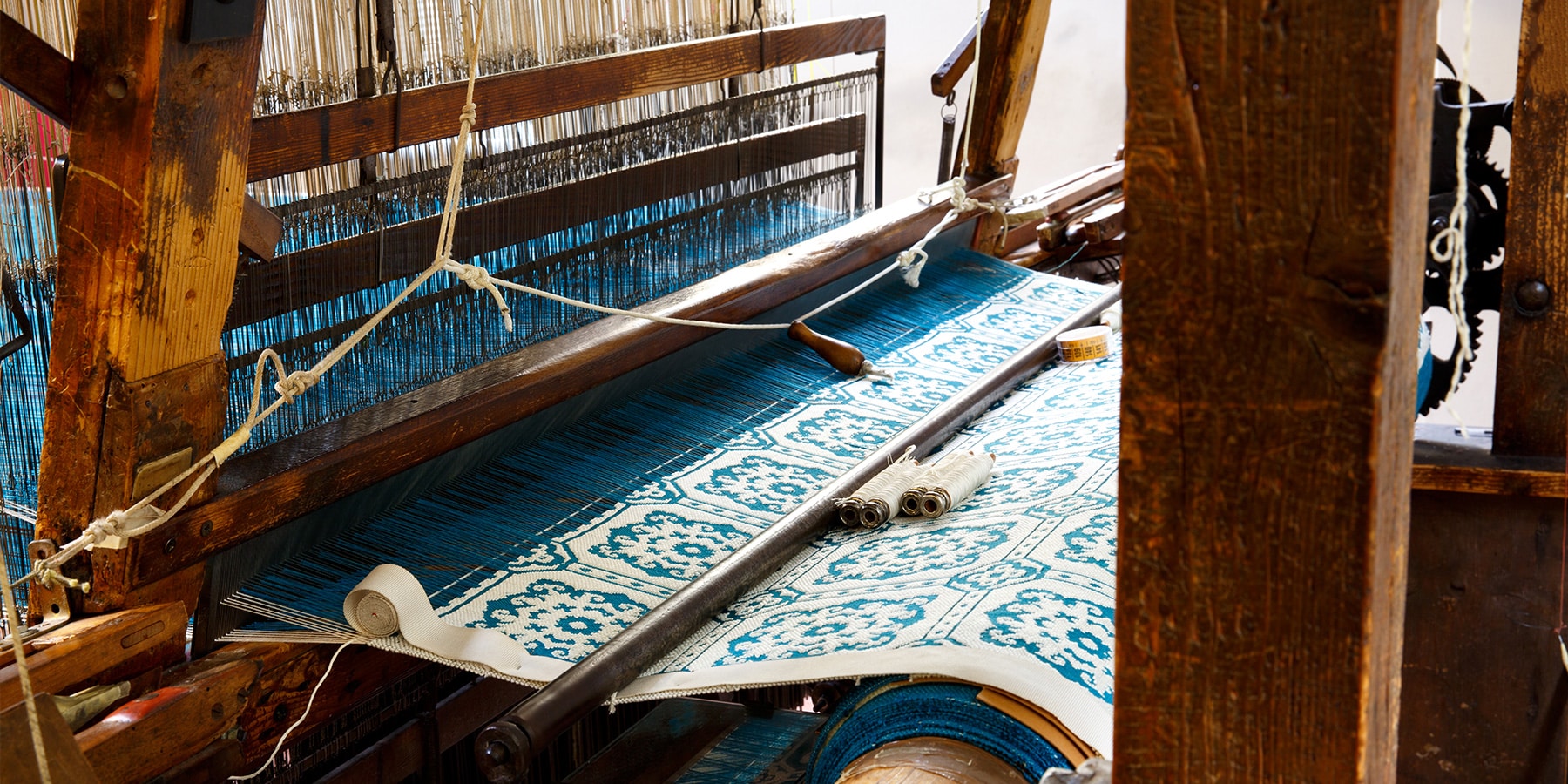 The silks of the Italian textile specialists Antico Setificio Fiorentino remain as coveted today as they did at the firm's founding, in 1786. 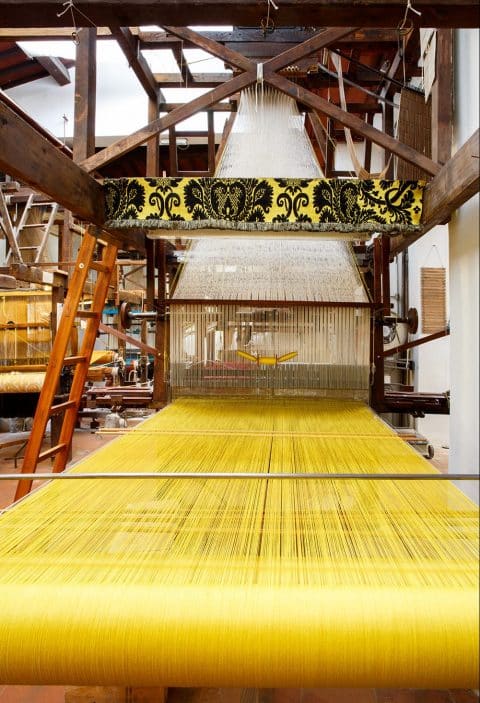 The Florence, Italy, silk mill Antico Setificio Fiorentino (ASF), which has been making impressive fabrics since 1786, is now offering its wares on 1stdibs. Above is the silk-and-linen Guicciardini brocade, in production on an 18th-century hand loom. Top: Another hand loom from the 1700s, this one with the firm’s Michelangelo brocade. All photos courtesy Antico Setificio Fiorentino unless otherwise noted

In the world of luxury retail, there’s much fretting these days over whether storied heritage brands can survive in an era when tastes seem to change as quickly as one’s Instagram feed. Luxury, we’re told, is now more about “having experiences” than possessing precious wares. Yet at the silk mill of Antico Setificio Fiorentino (ASF), tucked into the medieval Florence neighborhood of Borgo San Frediano, the rhythmic chorus of shuttling antique looms, hand operated by a select cohort of skilled weavers, continues unabated. Demand from monarchs, magnates and fashion houses for the workshop’s exquisite made-to-measure fabrics is robust, even though the wait for an order of the firm’s silks, linens and cottons can be many months long.

Multiple factors contribute to that long wait — and the textile’s consequent high cost. To prevent imperfections, any fabric produced on one of the oldest looms, which date to the 1700s, must be entirely woven by a single weaver, using a consistent rhythm. These looms can produce only about 15 inches of material in a day. By contrast, the mill’s six semi-mechanical looms, built in the 19th century, can make nearly 33 feet of fabric in the same amount of time. 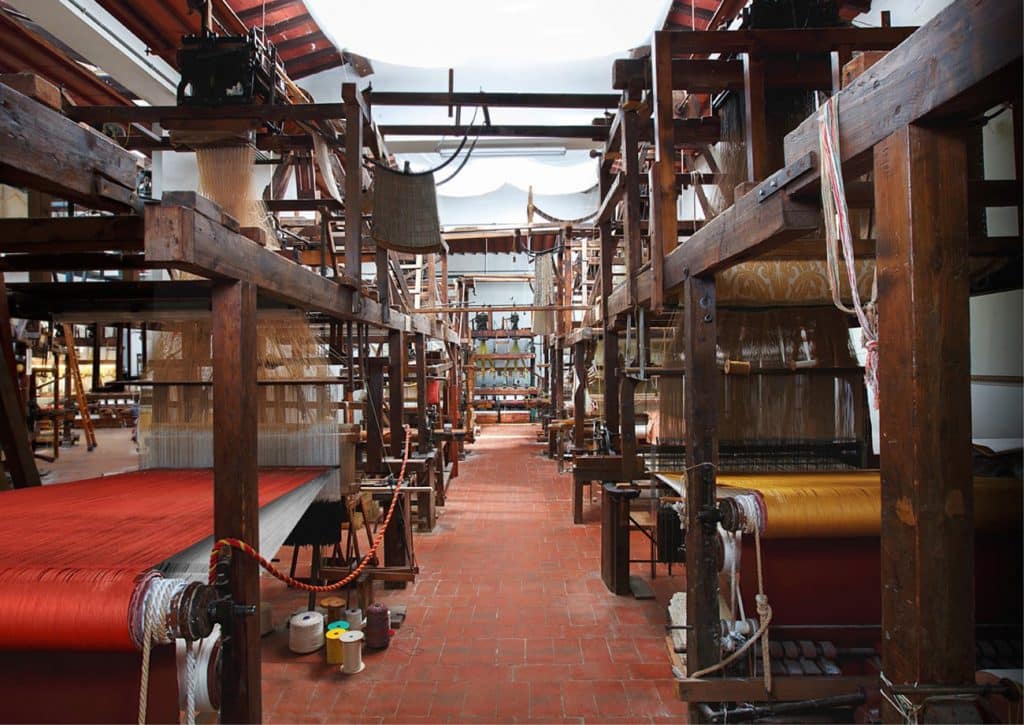 Clients today are buying “slow luxury,” says Niccoló Ricci, ASF’s managing director. Ricci — son of Stefano Ricci, the owner of the eponymous superluxe menswear label that acquired ASF in 2010 — waxes rhapsodic when describing the workshop’s “different smells, and distinctive and particular colors.” He crumples a precious silk fabric in his hand and speaks of its “coloratura” sound. You might say he gives a whole new meaning to the phrase “a man of the cloth.” Indeed, there is an almost religious quality to his deep commitment — and that of his entire family — to the mill and to the city’s textile heritage. Among their many acts of Florentine philanthropy has been undertaking the arduous task several years ago of restoring, deciphering and digitizing centuries-old volumes on the art of silk and the art of wool for the State Archive of Florence. 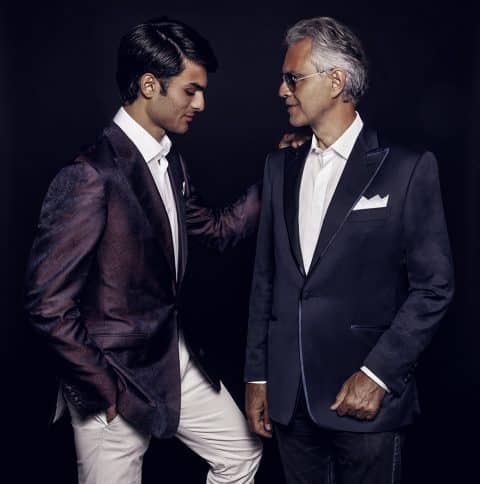 Opera star Andrea Bocelli (right) and his son Matteo wear clothes made with ASF fabrics and designed by the fashion house Stefano Ricci, which acquired the historic textile firm in 2010. Photo courtesy of Andrea Bocelli

Since the days of the Medici, the city has been renowned for its elegant artisanal wares, especially its silks. Their magnificent colors and weaves dazzle in the paintings of such Renaissance masters as Botticelli, Piero della Francesca and Pontormo. And perhaps no company embodies that heritage better than ASF. It was established as a cooperative workshop in 1786 by some of Florence’s noble families in an effort to boost the city’s then-lagging textile industry, with each family contributing a loom, along with the weaves and patterns distinctive to its house. The mill also features a 17th-century warper — fabricated according to the design of perhaps the most famous of all Florentines, Leonardo da Vinci — on which passementerie is still made. 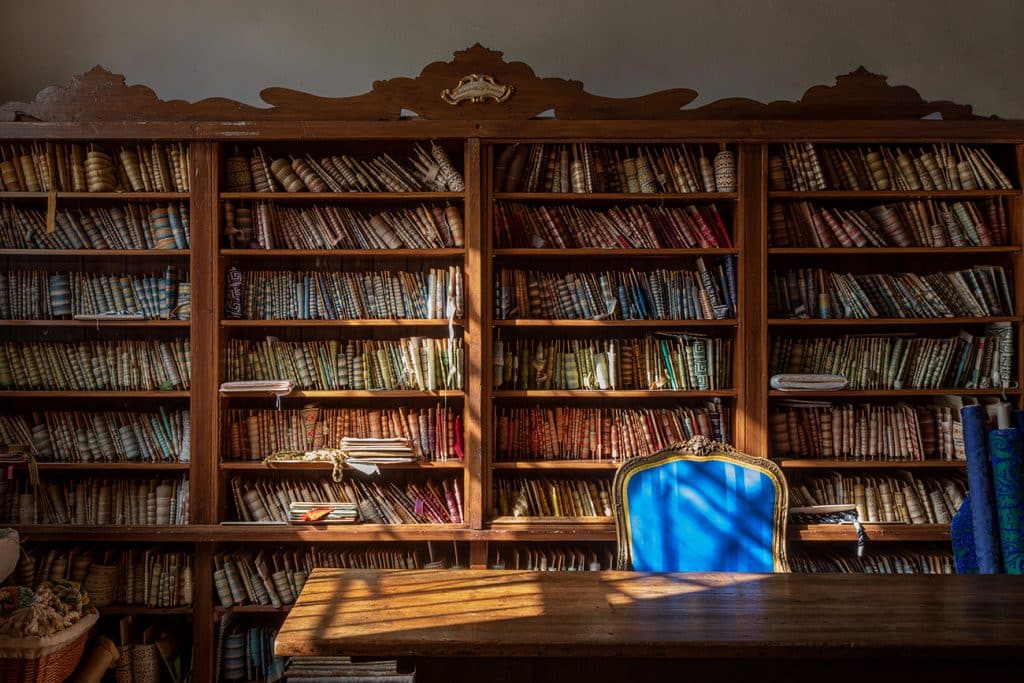 After World War II, when Italy’s economy was in tatters, Emilio Pucci, a descendant of one of the founding families, took over the mill’s direction. As charismatic as he was connected, and with a true flair for textiles and publicity, the jet-setting fashion designer soon had the workshop manufacturing fabrics to refurbish the war-neglected palazzi and villas of Europe’s nobles and royals. 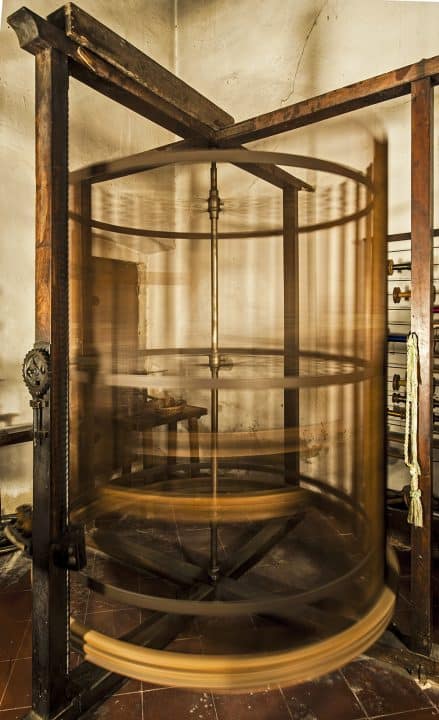 ASF’s trims, braids and other passementerie are all made using a warping machine designed by Leonardo da Vinci.

Collaborations on custom weaves with such maestros of design as Renzo Mongiardino, renowned for his maximalist fabric-filled interiors, became a mainstay. And it was to ASF that fabled director Luchino Visconti turned when producing two of his most visually arresting costume dramas, The Leopard and Death in Venice.

It was through such high-profile commissions and promotions that a young Juan Pablo Molyneux, the now-celebrated Chilean-born, New York–based interior designer and architect, first heard about the company. He was working halfway around the world from the atelier, in Buenos Aires, when he suggested using its fabrics to María Amalia Lacroze de Fortabat, the Argentinian cement magnate and philanthropist, who had engaged him for a decorating project that required what he recalls as “an immense quantity of silk.” 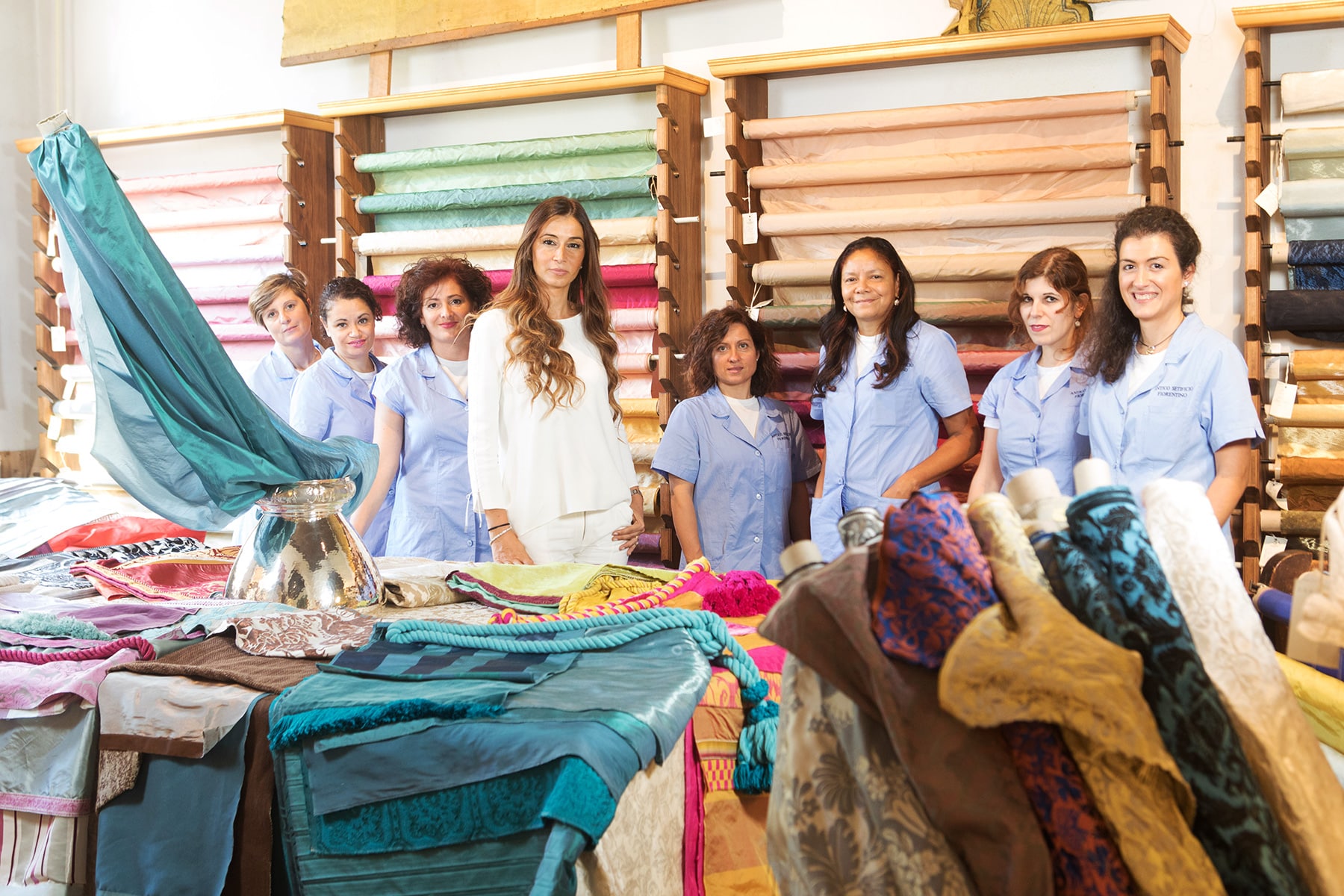 ASF general manager Elisabetta Bardelli Ricci (in white), Stefano Ricci’s daughter-in-law, poses with some of the firm’s expert weavers in the Florence showroom.

Giving him quite literally the cashmere sweater off her back, she requested that he travel to Florence and match the garment’s color for the order himself. Cristina Pucci, Emilio’s widow, who had taken over the mill’s management, worked with Molyneux on the exacting task. It was the beginning of a close friendship, which eventually made ASF the designer’s textile house of choice. 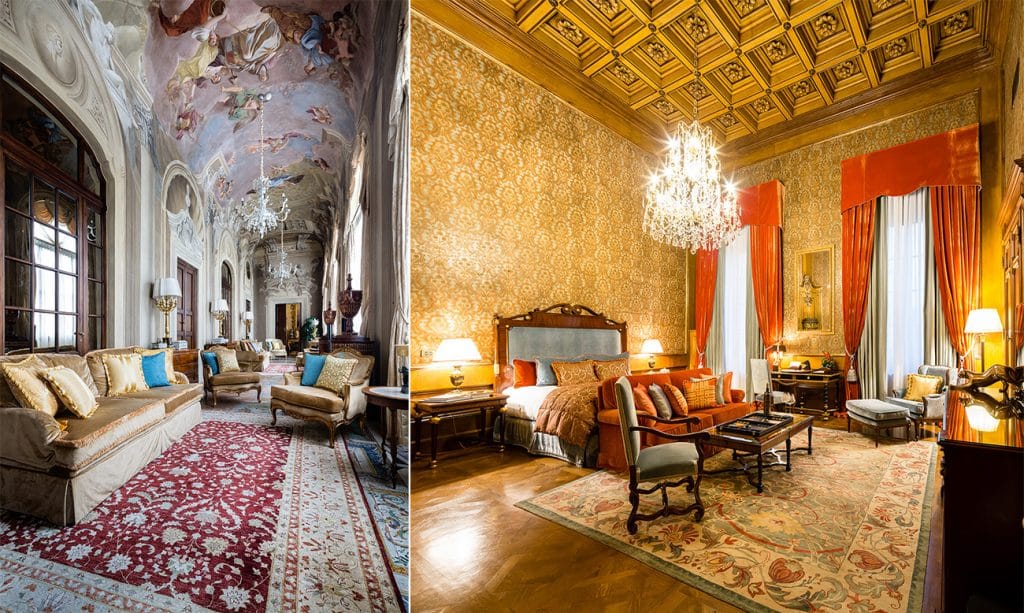 ASF created a special collection for the suites of the Four Season Hotel Firenze, which has occupied the Renaissance-era Palazzo Scala della Gherardesca since 2008.

And so it remains, even with the change in ownership. Why? “It’s simple,” Molyneux explains. “I do quite big, bespoke projects. I always want a special color, or to duplicate a fabric from the seventeenth or eighteenth century, and there aren’t many places that can do this kind of work.”

Luca Dini, a Florentine superyacht designer, agrees. He and his clients, he says, appreciate the mill’s “special atmosphere . . . breathing both art and history. One feels part of the de Medici family. All this makes the selection of a textile a mesmerizing experience for the body, from the sight down to the touch, and not merely a choice for its own sake.” 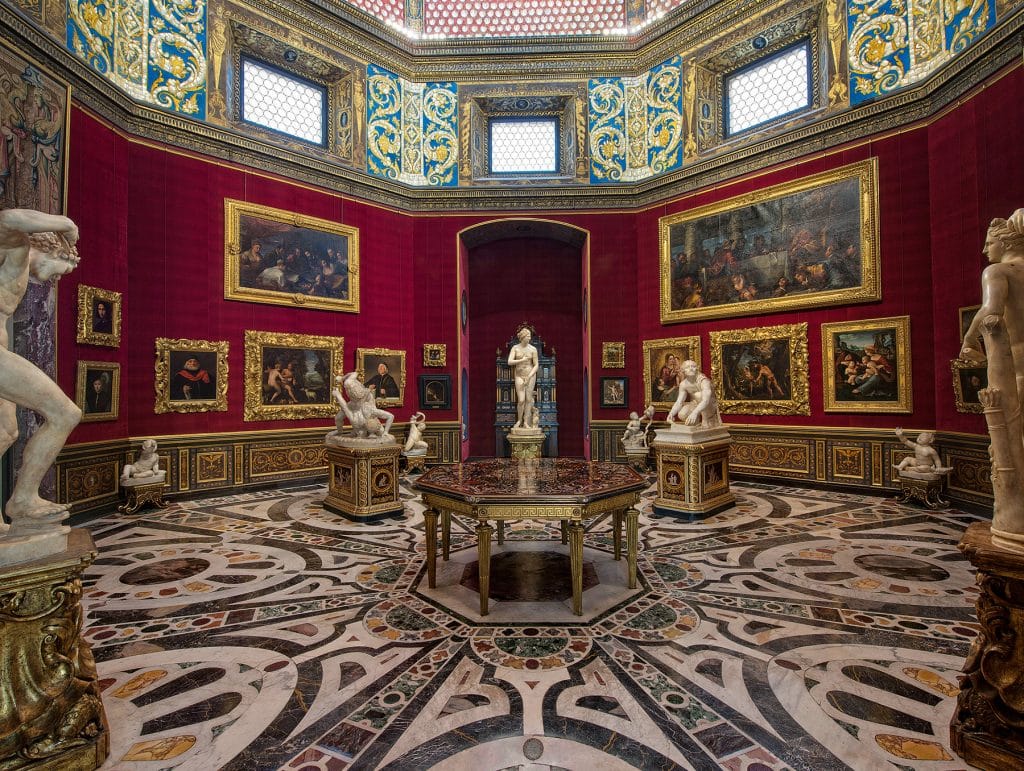 Of the many textiles ASF produces, Molyneux especially admires the “superb” taffetas. Ermisino, a shimmering Renaissance-era taffeta shot with threads of different colors, is among the most popular of the workshop’s offerings. That’s according to Ricci’s wife, Elisabetta Bardelli Ricci, who serves as the mill’s general manager. She says the company’s ability to achieve such effects prompted the owner of a 230-foot yacht to commission a fabric that would mimic the dappled appearance of sunlight on a wavy sea, a feat it accomplished by developing a silk with a superfine metal weft. 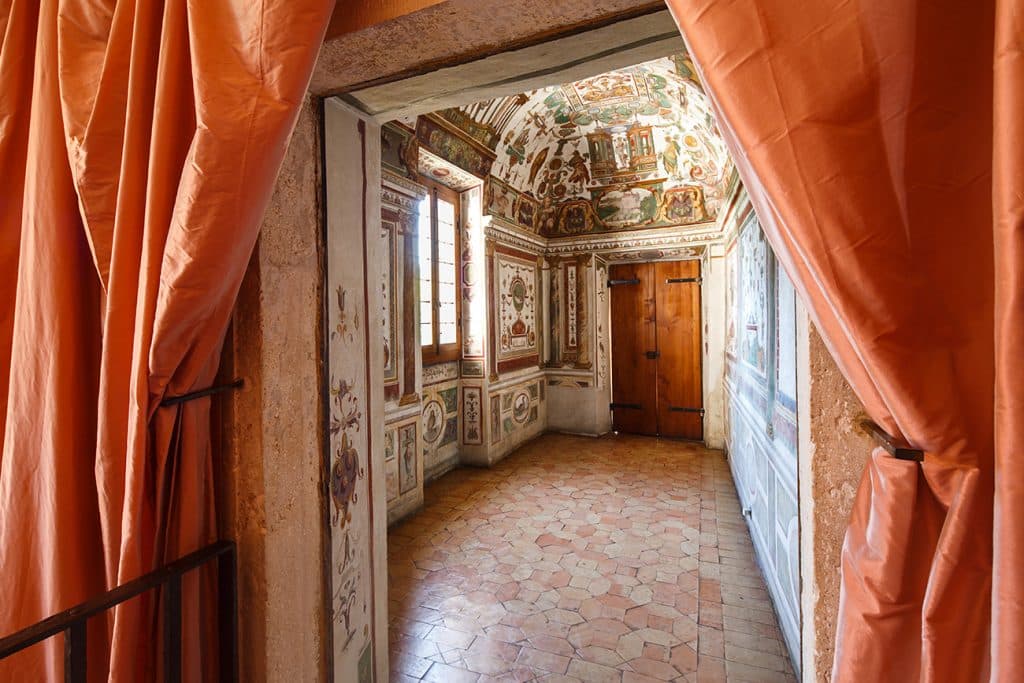 ASF has recently conceived a new fabric collection to furnish the suites of the Four Seasons in Florence, and is producing Stefano Ricci’s own signature take on the mill’s storied brocades, which will outfit a cigar room in Asia. The firm is also producing custom fabrics for haute couture labels, including Chanel, Lanvin and Prada. 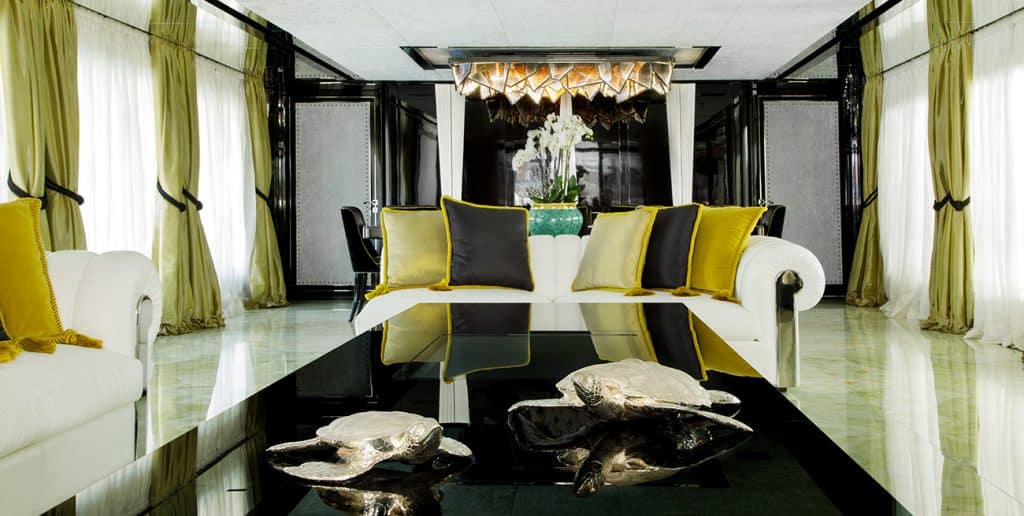 A metallic version of ASF’s Ermisino textile can be seen in the interiors of a private yacht.

Of course, Stefano Ricci makes abundant use of these prized textiles in his own tony garments, which are known for radiating a manly magnificence. Fans include Jeff Bezos, Andrea Bocelli, Tom Cruise and Morgan Freeman. The late Nelson Mandela was also a devotee, once wearing a shirt and slacks by the designer, in an ASF black jacquard silk, to Buckingham Palace for a dinner in his honor.

The story goes that Queen Elizabeth II, who has, of course, worn and lived amid many fine silks herself, commented approvingly on his shirt. Which is likely as close as any Italian firm will ever get to a Royal Warrant of Appointment.