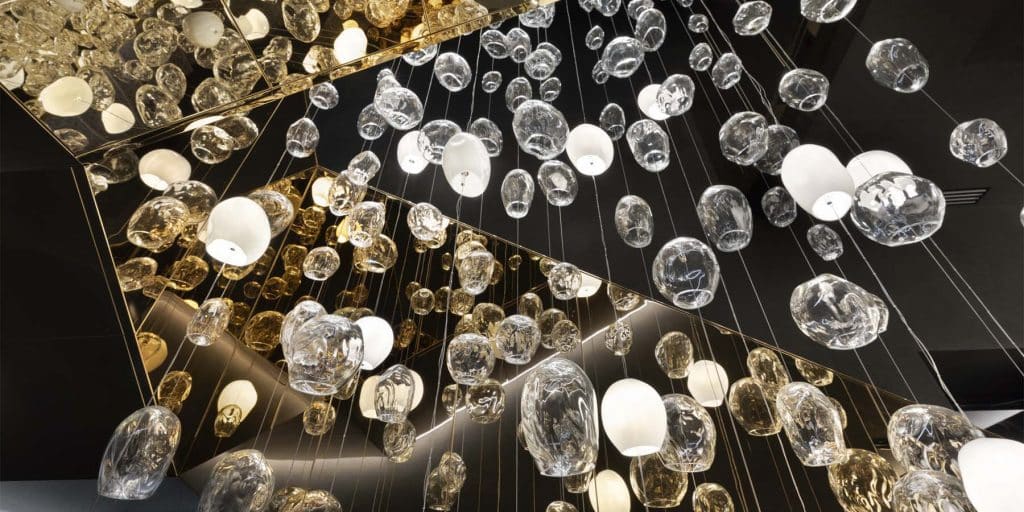 September 27, 2020Barovier&Toso may be the only company in the world whose products appear in the paintings of Tintoretto and Caravaggio. The still-thriving Venetian glassworks, revered for its catalogue of exquisite mouth-blown chandeliers, sconces and table lamps, originated on the island of Murano — located in Venice’s fragile lagoon — where families pass down techniques for glassmaking as others do recipes for pasta dishes, and where Italy’s venerable glassblowing industry is still based.

The Barovier dynasty began in 1295, when Jacobello Barovier, mentioned in historical documents as a master glassblower, began pinching, cutting, blowing and twisting a molten mixture of sand and minerals into incandescent works of art. It remained entirely family owned until the mid-20th century, when it merged with another glassworks to become Barovier&Toso, which today has its own 1stDibs storefront. Over the centuries, the company survived wars, changing fashions and business challenges, preserving its secrets and skills while maintaining a reputation for supreme quality. “Our obsession with perfection is a form of respect for those who struggled before us,” says Barovier&Toso president Rinaldo Invernizzi. “That’s heritage — ancient techniques kept alive through daily implementation and development for more than twenty generations.”

Contemporary architects and designers often use Barovier&Toso’s epic chandeliers — whether ornate and voluptuous or minimalist and ultramodern — in high-profile public spaces like Four Seasons, Ritz Carlton and Bulgari hotels and the flagship stores of Dolce & Gabbana, Louis Vuitton and Cartier, as well as in corporate offices and private homes. The new, nearly 10,000-square-foot Palazzo Barovier&Toso, in Murano, is a retail temple to the company’s 100-plus collections; a new showroom in Milan’s design district is forthcoming.

“There is nothing like Barovier&Toso. They are an international treasure. You can spot the quality from across a room,” says Los Angeles–based designer Brad Dunning, who recently used one of the maker’s contemporary Piume wall sconces, in a beige-gold glass, for a 1937 Mediterranean Revival estate in Southern California, where it joined Giò Ponti furniture and a Fontana Arte mirror in a lounge with a lacquered ceiling and goatskin-paneled walls.

In the 15th-century, Angelo Barovier invented the first completely clear glass, the miraculous cristallino, paving the way for the crystal chandeliers that became a Renaissance fashion. The rare few creations attributed to the maestro, including an elaborately decorated wedding cup in the Murano Glass Museum and a blue chalice in Bologna’s Medieval Civic Museum, are considered among the greatest works of glass art ever produced. By the 1600s, three Barovier relatives were running separate, independent Murano glassworks, producing pieces under the angel, bell and star insignias.

In the ensuing decades, the Baroviers rose to the challenges of the Baroque era, when tastes for over-the-top decoration pushed glass artists to experiment with truly daring designs. They also had to compete with glassworks popping up in England, Bohemia and elsewhere. The Baroviers survived the chaos that followed the fall of the Venetian Republic, in 1797, and continued to keep pace with stylistic trends and innovations into the modern age.

Fast-forward to the period after World War I, when Ercole Barovier took over the reins of the company that had evolved from the angel-insignia glassworks and emerged as the family’s greatest genius since the 15th century’s “Angelo the Great.” Ercole served as artistic director for the better part of the 20th century, spearheading the development of the glasswork’s Art Deco and modernist designs. He energized and expanded the family business, gaining sole ownership in 1936 and merging three years later with the Venetian glass factory SAIAR Ferro Toso. Today, Barovier&Toso uses advanced computer systems to meld new lighting technologies, like LED, with age-old craft techniques in all its new production.

Anne Wilkinson, a principal at San Francisco architecture firm BAMO, is a longtime fan. “A stunning Barovier&Toso ceiling mount was one of the first light fixtures I ever specified, for a private elevator completely upholstered in Fortuny,” she says. “It was quite the jewel box.” BAMO’s 50-person office recently installed fixtures from the company, custom-fabricated for seaworthiness, on a client’s yacht, and chose its St. Germain sconces for the suites of the Four Seasons Madrid. “The pieces have a glamour and a scale that makes them appropriate for hospitality use,” Wilkinson explains, “but they also have exquisite detail, which makes them a very nice choice for homes.”

Miami-based designer Bea Pila agrees. For a contemporary French-château-style house in Coral Gables, she recently employed not one but three Barovier&Toso Tangeri chandeliers in the soaring entry hall and at least seven of the maker’s other fixtures elsewhere. “I was introduced to the beauty of Barovier twenty years ago by clients who were glass collectors,” recalls Pila, who had the company create a custom balcony railing of blown glass for the same clients’ New Hampshire home.

When Barovier&Toso invited Pila into its Murano facility, she got swept up in the history and romance of it all. “I saw the minerals, which give the glass its color, piled up as powdered dust, being used just like spices in a recipe to create a beautiful new pink.” she says. “If you’ve ever been in front of a twelve-hundred-degree glass furnace, you know you’ve got to really love what you’re doing. There’s a learning curve of at least twenty years from apprentice to master blower who can produce one of these spectacular, intricate chandeliers. Each fixture is an heirloom, handmade by one incredible artisan with tremendous love. All that is embedded as a story within each fixture. And people love things that have a story.” 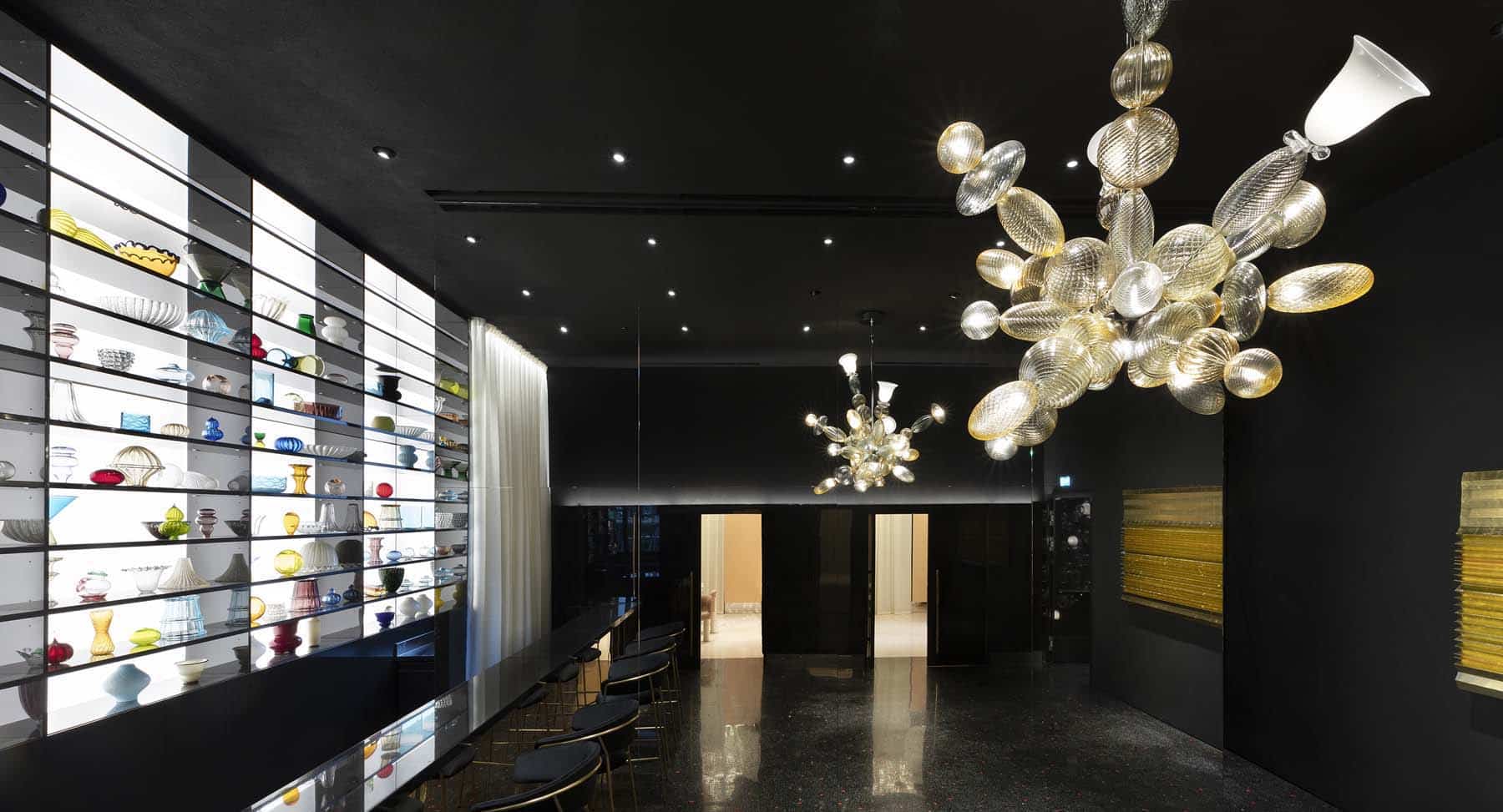 Browse Barovier&Toso on 1stDibs
Shop All