In London, Unusual Antiques and Eclectic Treasures Are at the Heart of Beata Heuman’s Joyful Schemes 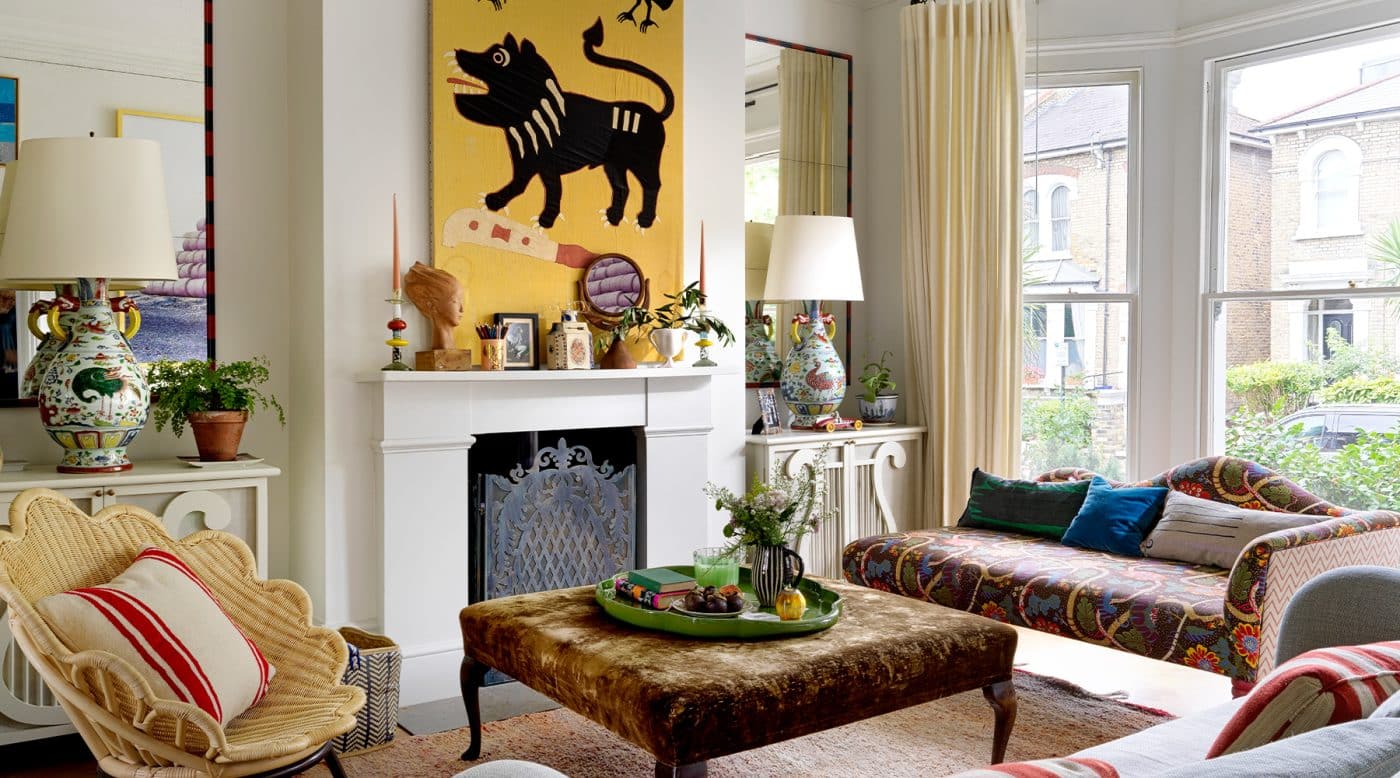 The 1stDibs 50 honoree has proven herself a master at sourcing and curating unique and collectible pieces that make her interiors stand out.

April 10, 2022For many people, a relationship with antiques evolves over the course of their lifetime. That’s certainly true for the Swedish interior designer Beata Heuman.

Since Heuman launched her West London studio, in 2013, her schemes — embodying her imaginative yet forensically practical approach to design — have increasingly featured period pieces. And her forthcoming projects, created for a growing international clientele, will be inhabited by an ever-more-eclectic array of heirlooms and design finds.

Heuman explains the evolution of her relationship with antiques by pointing to a shift in her vocabulary: “I used to use the term vintage a lot. Now, I tend to say antique. Obviously, an antique piece by definition needs to be more than one hundred years old, but even the word has such gravitas — it feels reassuringly serious.”

Whether they’re the highly collectible creations of titans of design or quirky bijou objects picked up from a local flea market, for Heuman, the role of antique finds is the same: to lend richness, originality and, not least of all, wit to a room.

“Sourcing antiques is such an important part of decorating and designing for me,” she says. “By using as many old pieces as possible, in as many different styles as possible, I can create layers that make a scheme feel as though it had been built over generations.”

Conjuring this atmospheric patina of age is not always easy. Heuman achieves the feat by exercising her discerning eye for offbeat art, antiques and objects, a faculty largely responsible for her studio’s success. When it comes to decorating with antiques, her mantra is quite simply “Dare to be different.”

Heuman has no interest in creating a museum-like ode to a particular era or single design style. Eclecticism is at the heart of her idiosyncratic aesthetic.

She sees a very practical payoff to this approach. “If you have lots of different styles in a space, it’s easier to add to it than if it had one very specific look,” she points out, noting, too, that older objects have proved their worth — they can stand the test of time, in terms of both their quality and their style.

Lately, Heuman’s evolving tastes have led her to delve deeper into the past, to seek out historic Scandinavian designs from the 18th and 19th centuries. Her interest in these pieces has deepened since she began renovating the family farmhouse where she grew up, in a rural hamlet in the southern Swedish county of Skåne.

“The farm was built in the seventeen nineties,” she explains. “So it’s asking to be decorated in this historic way.”

In working on this personal project, she has developed a fascination with furniture in the traditional Swedish allmoge style, which places an emphasis on natural materials and craftsmanship.

Browsing 1stDibs for these treasures has become one of her favorite pastimes, as she slowly fills the house with antiques.

A recent find was a set of painted dining chairs in the 18th-century Gustavian style, which she sourced from Swedish dealer Green Square Copenhagen. That gallery was also the source of a blue chest of drawers painted in the Gustavian manner that she installed in the bedroom of a recently completed family home in London’s Holland Park. The piece brings a time-worn charm to an otherwise contemporary scheme.

Heuman being Heuman, such historical discoveries are always arranged alongside pieces by the Swedish design company SVENSKT TENN and her most-loved designer, Josef Frank. A pioneer of Swedish Modernism, Frank created designs that she believes translate well across both historic and new interiors.

“His work is so refined, with a restrained simplicity that really speaks to me,” says Heuman. “I’m always on the lookout for original pieces from the forties and fifties.” Rare and highly sought after, these can bring just the right touch of modernity to a space.

Also on the designer’s wish list is the work of the Helsinki-born Paavo Tynell, whose ethereal 1930s lighting creations gracefully illuminated his native Finland.

Ultimately, it’s all about getting the right mix — which often equates to dispensing with the rules. “I like using things that aren’t meant to go together,” says Heuman. “That’s what creates visual interest.”

In furnishing a space, she will often deliberately select objects that contrast in age, style, tone or material. The trick, she says, is to embrace variation and, above all, trust your personal taste.

When it comes to decorative objects and accessories, Heuman is an instinctive shopper who’s frequently attracted to the quirky and unusual. “I can’t help myself,” she admits.

The downside of following your instincts is that you’re tempted to overlook the practicalities. Heuman advises carefully checking objects’ condition reports and measurements, asking sellers about delivery costs in advance of a purchase and, importantly, having a particular place in mind when buying large items. “Otherwise,” she warns, “things can just sit unused for years on end.”

Patience is essential for a successful search. Finding the perfect piece of furniture for a certain spot can often be a waiting game. And that can be tricky, particularly when it comes to meeting client schedules and managing expectations.

So, how do you know when you’ve got the right piece? In Heuman’s experience, when you see it, you get a visceral response. “Style-wise, you should feel excited by the item,” she says. “Be brave— but if in doubt, ask a friend.”

Heuman took a risk when she bought an antique banner from the former West African kingdom of Dahomey at a decorative arts fair a few years back. Bold and bright, it now hangs over the fireplace in the sitting room of her family home.

“It’s a completely unique and surprising find,” she says. “It’s not what I was planning at all, but it pulled the space together and ended up setting the tone for the entire house.”

The lesson: Make room for the unexpected, and with perseverance — and a little luck — interior magic happens. 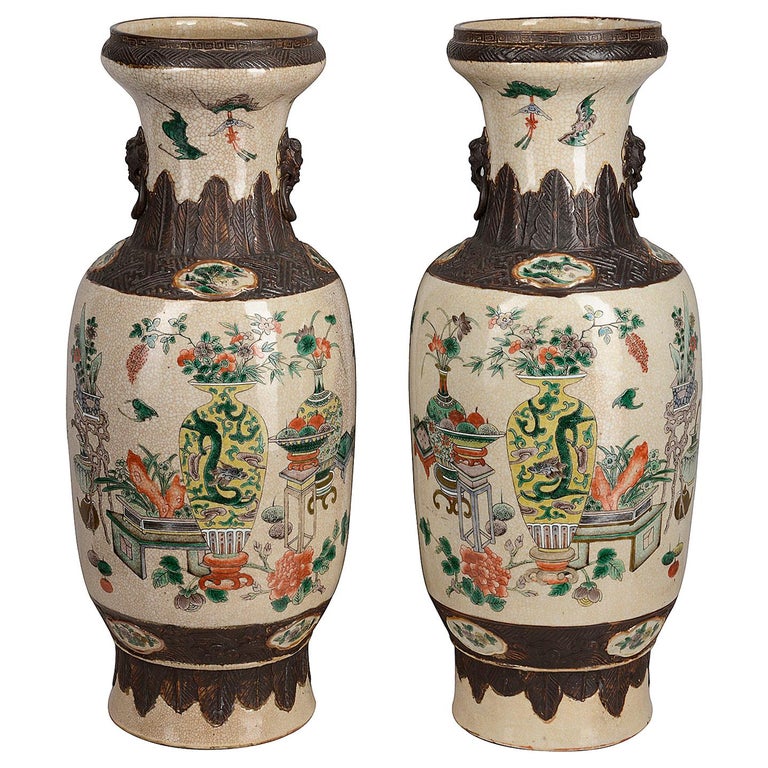 “These would make a beautiful pair of oversize lamps. The lamps on either side of the fireplace in the picture were just vases when I bought them. The oval lampshade creates a wonderful silhouette without taking up too much space. I think these vases would work beautifully in the same way.” 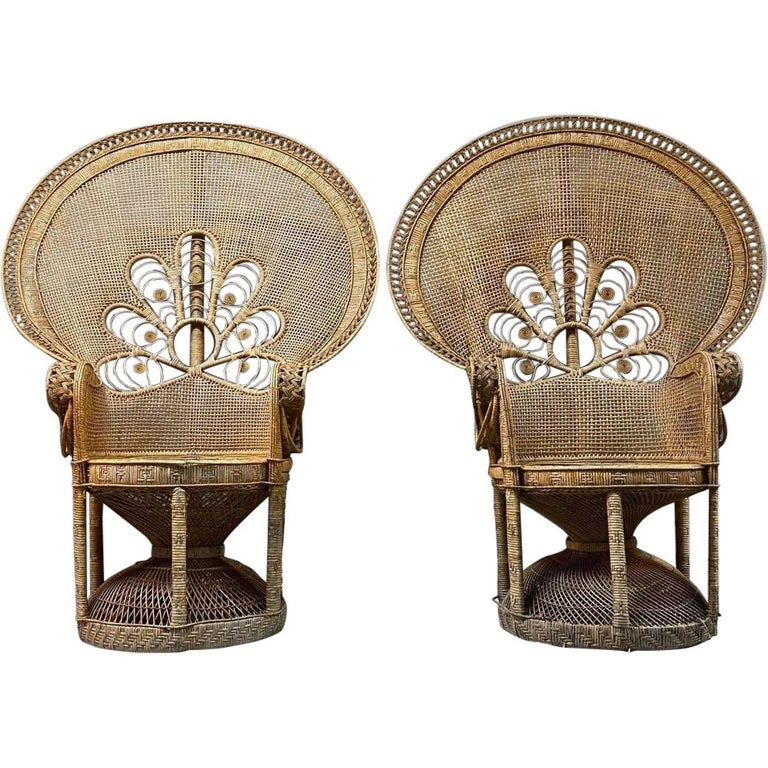 “Pretty mad, but I’ve always had a bit of a soft spot for these types of chairs. They are great for creating drama without feeling ostentatious, since they really are kind of beach chairs. They are also pretty light, although they make for a striking silhouette.” 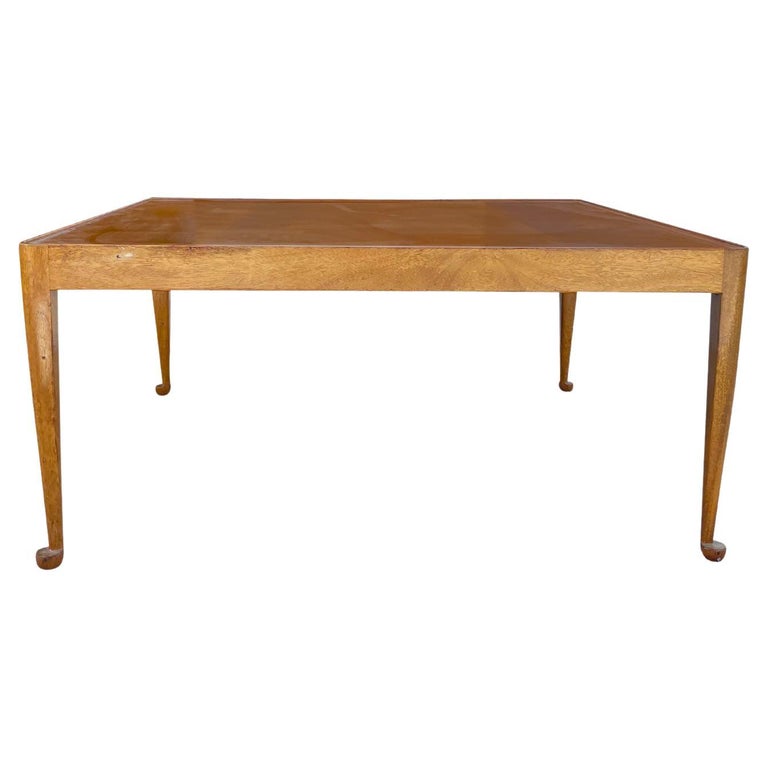 “You can’t really go wrong with a piece designed by Josef Frank. I often opt for an upholstered pouf rather than a coffee table, as I never want it to feel too hard. This is an example of a coffee table that actually feels inviting. I love the little feet too — looks like it’s about to walk off.” 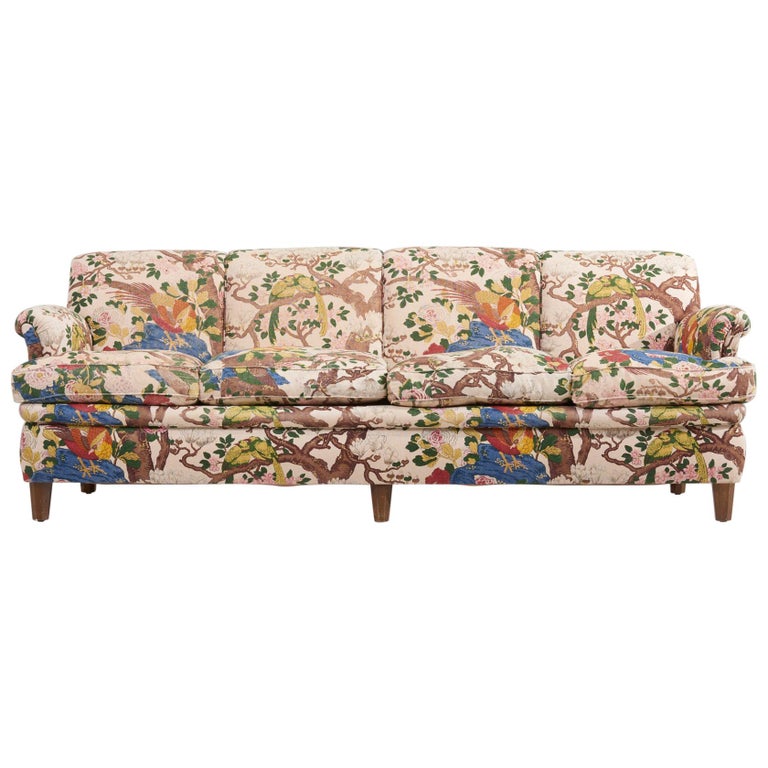 “It’s pretty gutsy to cover a sofa in such a bold pattern, and it can really work, especially on a simple sofa such as this one.” 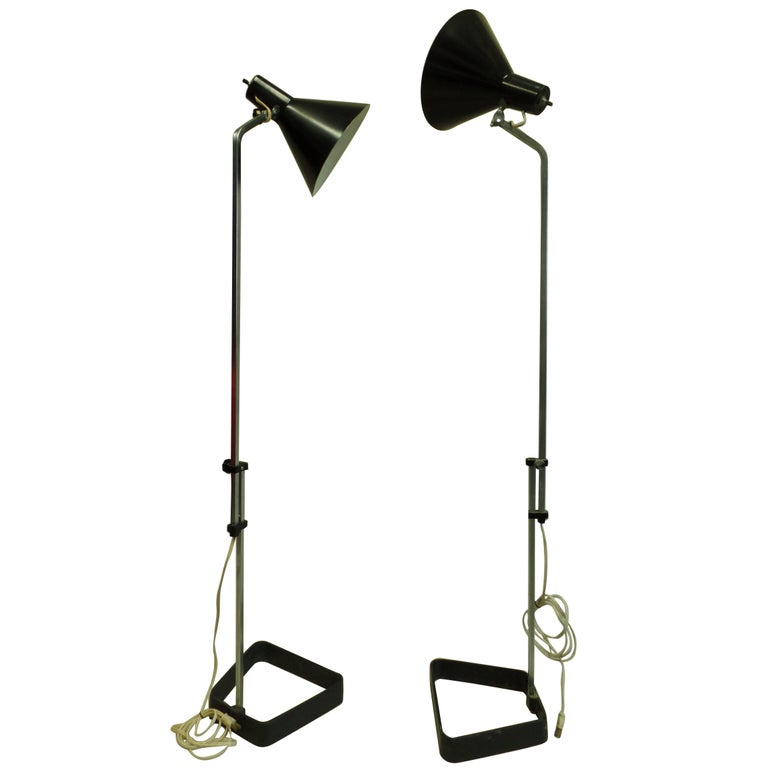 “I like adding a bit of edge, and these standing lights would be a perfect complement to the more feminine expression of my other choices. Perfect for reading too!” 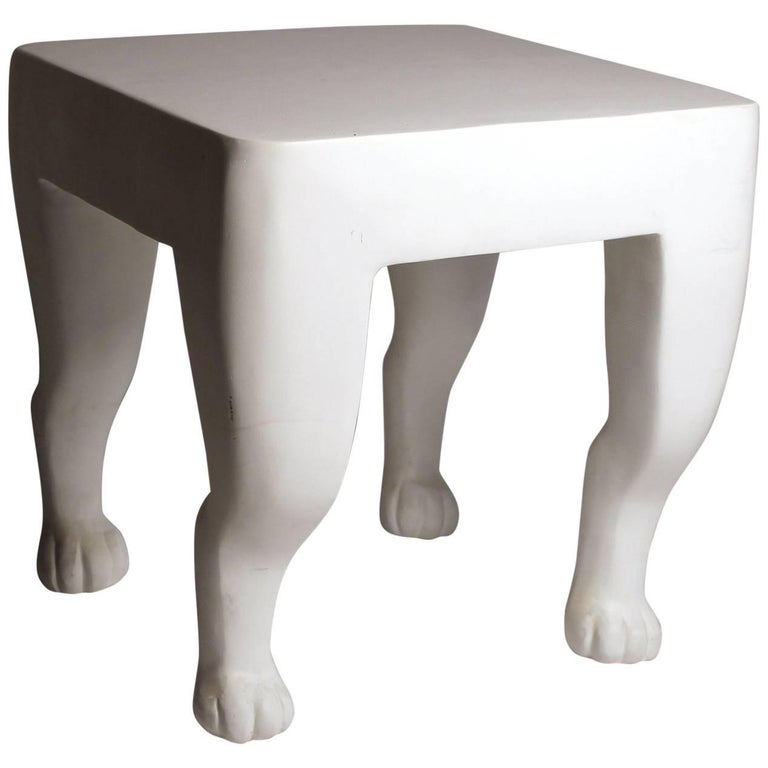 “It’s my dream to own a piece by Dickinson, and I have loved this design since forever. It’s more sculpture and art than a side table, to be honest!” 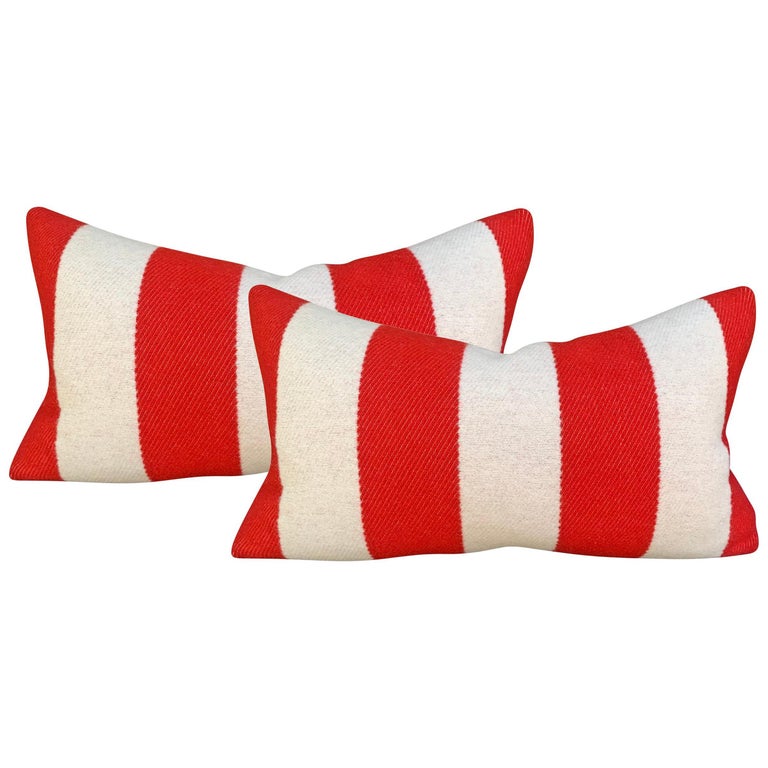 “When I got the stripy red cushions for the room, I felt it was finally complete. It’s rarely a bad idea to add a bit of red and white stripe.” 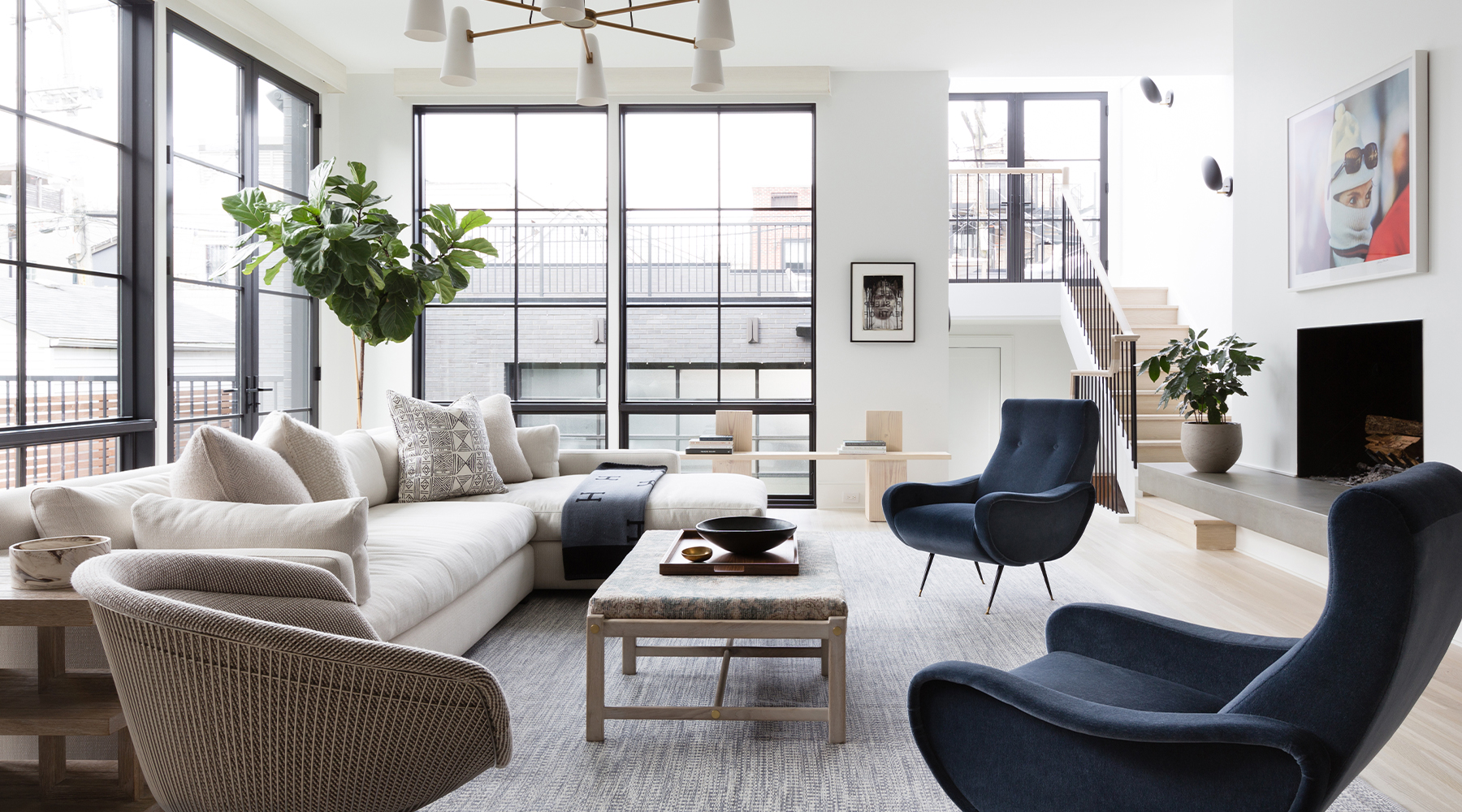