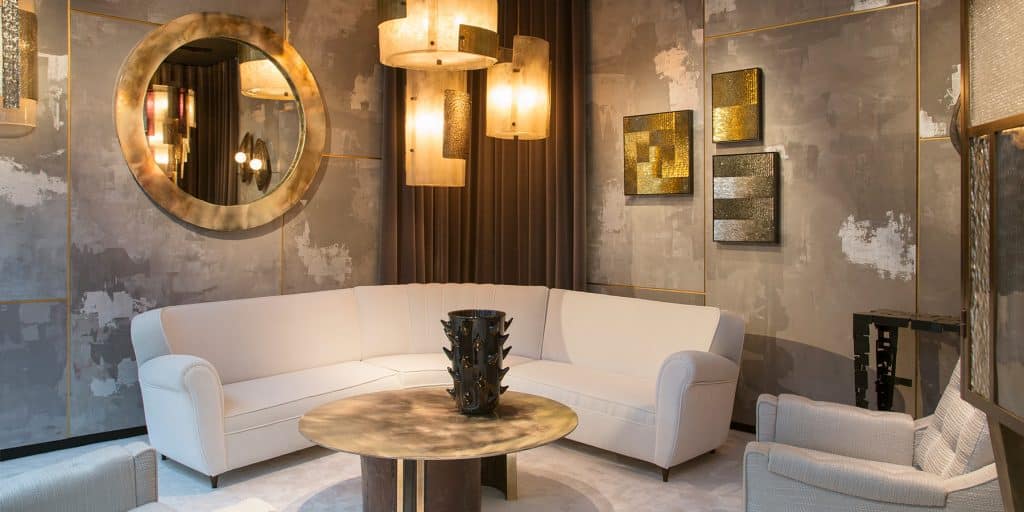 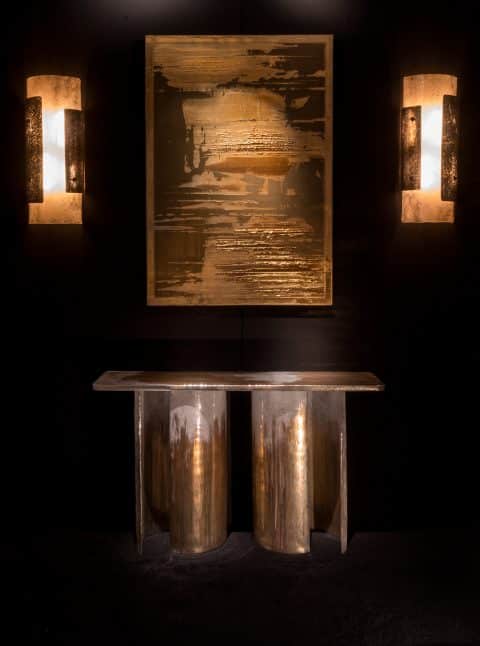 To develop his first furniture collection designed by outside collaborators, Simon Stewart didn’t have to look far. “It was really very simple,” says the owner of Charles Burnand, the London boutique known for its vintage Italian offerings and bespoke lighting, cabinetry and furniture. “I went to my top five clients and asked them if, for my first collection, they would design an icon.”

Fortunately for Stewart, all the powerhouse design firms on that list — Drake/Anderson, Ike Kligerman Barkley, David Collins Studio, Kelly Wearstler and Robert Stilin — said yes. The design brief was open-ended: They were to design any piece of furniture they desired, using materials of their choice. “They know us so well already and the capabilities and standards that we work to,” says Stewart, who named the resulting collection Icons, of course, and limited each creation to an edition of eight. “The idea was that they could design something, anything, and we would make it. We would have no design input whatsoever.”

Collaborating with designers to build the objects of their dreams is a recent development for Stewart, whose gallery will be one of the anchors of the new 45,000-square-foot 1stdibs showroom opening next month in the Terminal Stores building in New York’s Chelsea. He started out as a professional musician, having studied classical saxophone at London’s Royal College of Music. “I was doing pop music, TV and film — proper session work,” he says. “I was also playing in the music halls in the West End.” 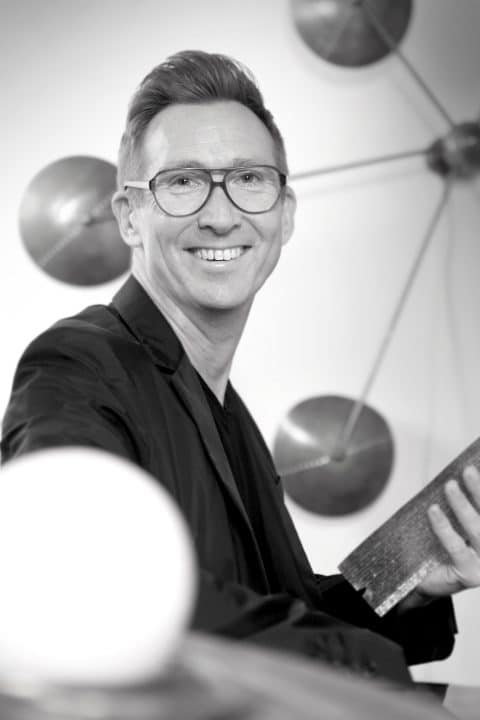 Stewart will soon set up a satellite shop in the new 1stdibs Gallery opening in the Terminal Stores building in New York’s Chelsea on February 12.

After more than a decade of performing, however, he came to a realization. “Everything that I thought music was going to be, it just wasn’t,” he says. “There was no creativity in it. You have a conductor telling you what to do and when to do it. It’s quite prescriptive.”

So, in the early aughts, he began working with his mother, Kathy Burnand, a florist and interiors stylist whose clients included Elizabeth Taylor. Together, they opened an upscale decorative accessories store, Home, next door to her flower shop. But as time went on, Stewart became increasingly interested in buying and selling Italian mid-century modern furniture. That business grew, and in 2010, when his mother retired, he moved it to a more prominent storefront in London’s Marylebone and changed its name to Charles Burnand, after his grandfather.

Since then, while continuing to sell mid-century Italian furniture, the store has developed a reputation for building its own exquisite pieces. It does so by employing a network of artisans Stewart has cultivated across Europe, including English specialists in metalwork and cabinetry, French experts in straw marquetry and glass masters from Murano, Italy.

With such resources at his disposal, Stewart has come to be regarded by some interior designers as a magician of materials, capable of pulling off the seemingly impossible when it comes to truly bespoke creations. “I saw right away that this is the guy who can make something out of nothing,” says Mia Jung, director of interiors at Ike Kligerman Barkley. “He can really create something wonderful when nobody else can.” 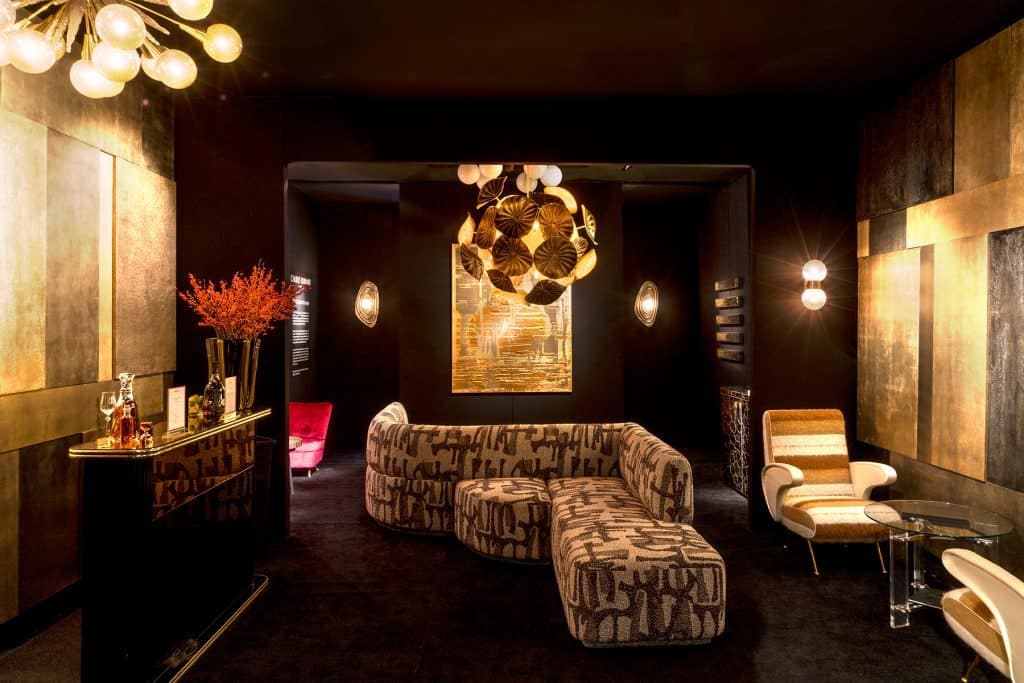 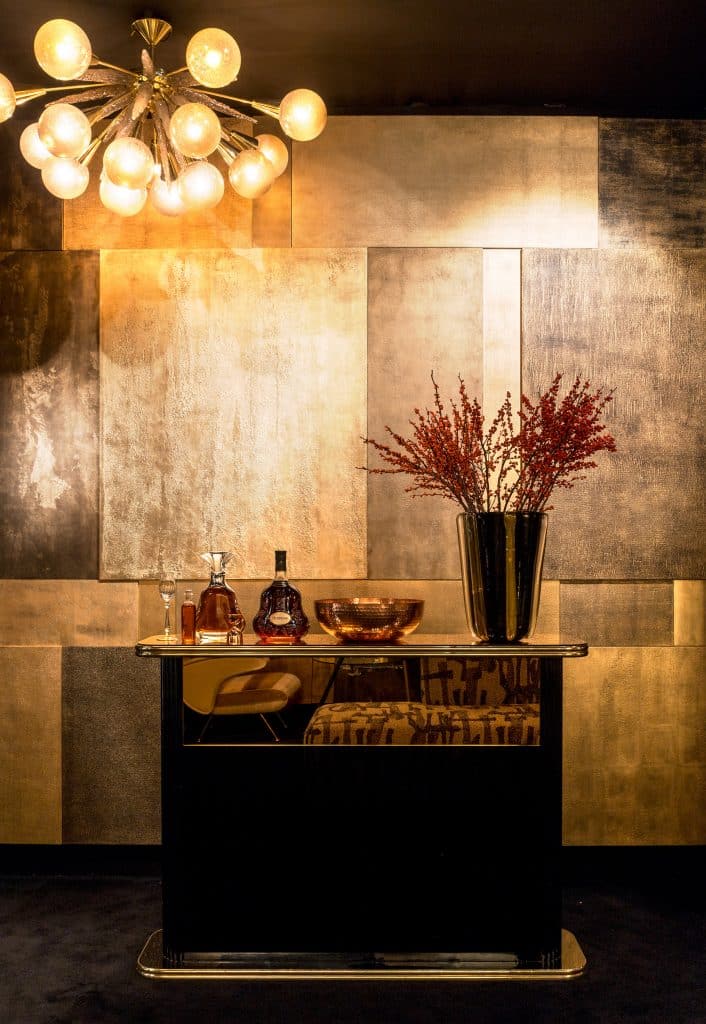 Stewart displayed the Icons with other pieces from his inventory, including this 1970s bar by an unknown Italian designer. 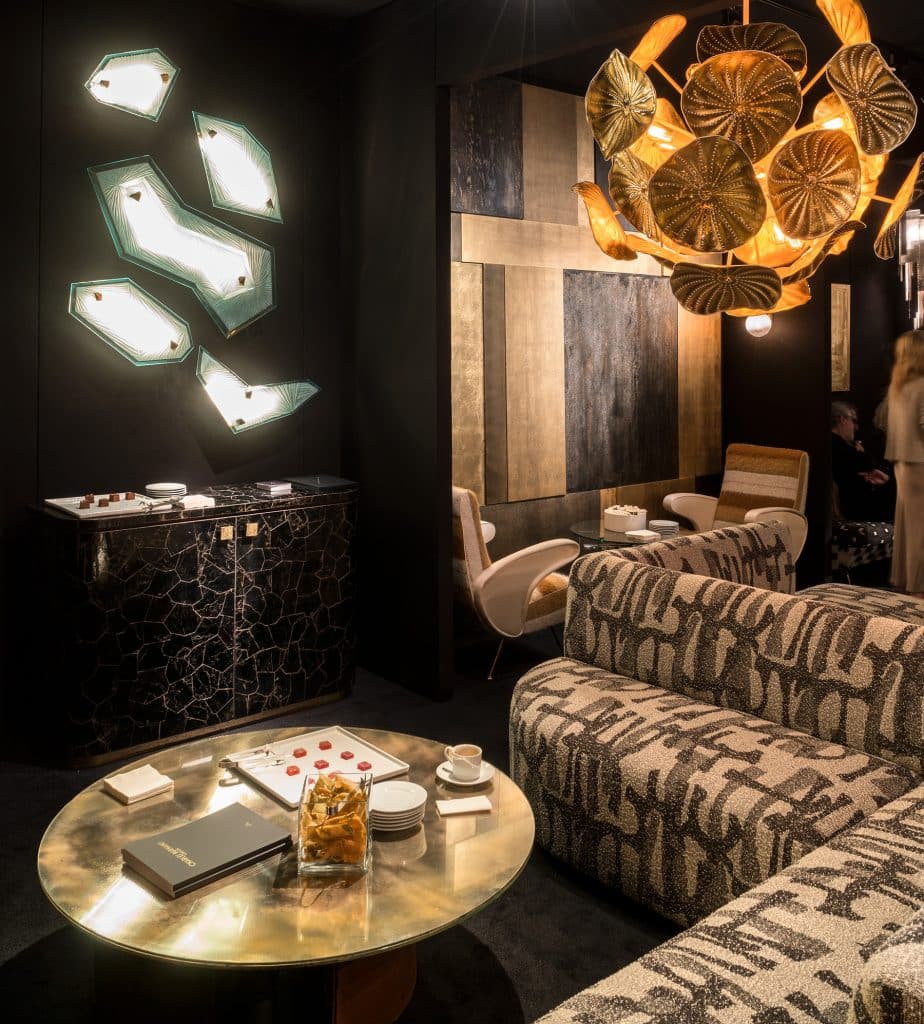 A one-of-a-kind Murano glass Urchin chandelier and Domenico Ghirò’s Cenote wall sconces shine a flattering light on a Vincent couch and Riccardo cabinet in mica, both created by the gallery’s design studio. 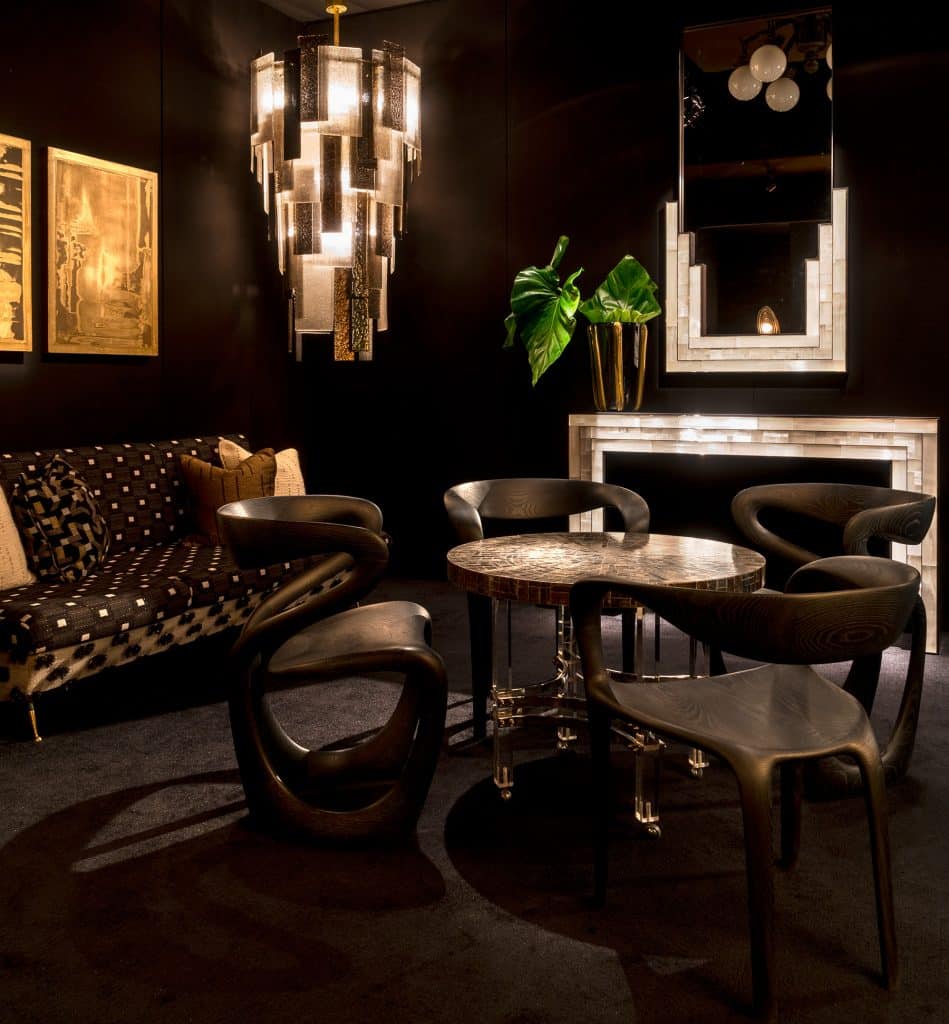 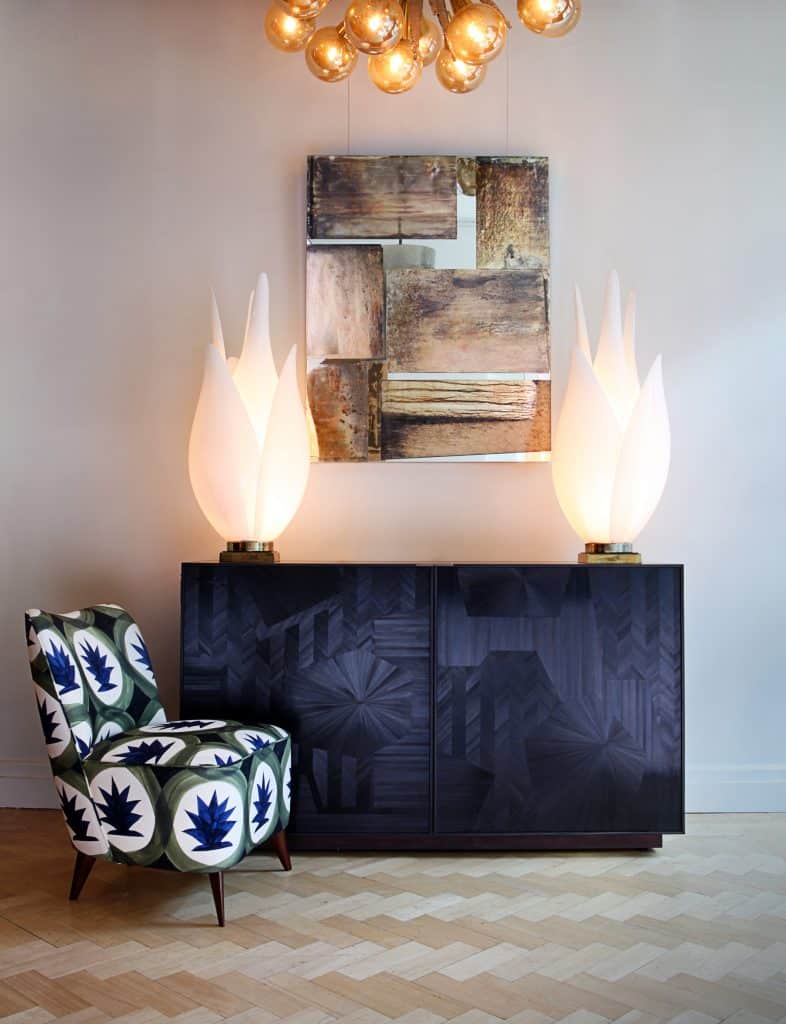 In the London gallery, a pair of Roger Rougier table lamps adorns a Bass credenza by Charles Burnand Design Studio, which also created the Monique chandelier and Rifrazione mirror, The 1950s Perla slipper chair is by Veronese.

Case in point: a two-story chandelier of translucent white Murano glass that Jung and Stewart are currently refining for the staircase of a Manhattan duplex apartment. To make it, Jung explains, Stewart worked with artisans to “come up with glass with all these different transparencies, which has so much character.”

For Charles Burnand’s Icons collection, Jung again used white Murano glass, this time sandblasted and acid-etched and enhanced with silver and 24-karat gold. The result: an all-glass console table supported by semicylindrical legs and shot through with hazy, shifting colors that evoke the appeal of natural horn “I wanted an ombré effect, just blending into the white glass,” says Jung.

Caleb Anderson, of Drake/Anderson, was attracted to working with Stewart for reasons similar to those that drew Jung. “What struck me was just the quality of the materials that he had and the endless possibilities those materials opened up,” he says. “When you’re designing custom furniture, it can become repetitive and redundant, but when you have these different materials to work with, it suddenly becomes a lot more interesting.” 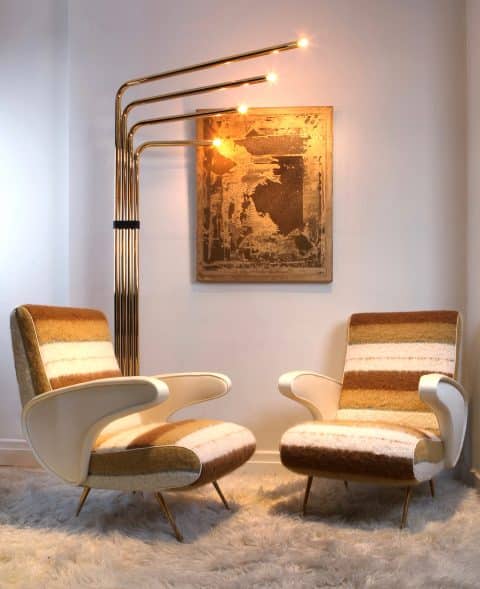 In London, an architectural, brass-plated Reggiani floor lamp with four modular arms, from the 1970s, illuminates a pair of Italian mid-century modern armchairs.

For his contribution to the Icons collection, Anderson designed a console and mirror that feature strips of polished gypsum tiles separated by lines of inset nickel, the whole enclosed by a stepped wrapper of ebonized eucalyptus wood. “I’ve always loved Art Deco furniture,” says Anderson, “and this is meant to be a fun spin on that.”

London’s David Collins Studio produced sconces with hand-hammered brass frames set off by straw marquetry panels in violet and gold, their diffusers formed by overlapping plates of Murano glass with a rigato, or ribbed, surface. The Collins, Anderson and Jung creations were introduced this past November in the Collector’s Lounge at the Salon Art + Design fair, in New York. Stewart installed them in an enveloping space of black floors and walls with accents provided by a mirrored ceiling, sputnik chandeliers and soaring gold, bronze and black murals by Pierre Bonnefille. (The display showed off Stewart’s skill as a decorator, another burgeoning arm of his business.) The creations by Wearstler and Stilin turned out to be of such complexity that they won’t be debuting until the end of 2019.

“This is just the beginning,” says Stewart, who would rather get the pieces right than rush them. “Every project is completely different, which means that each has its own unique set of solutions.”