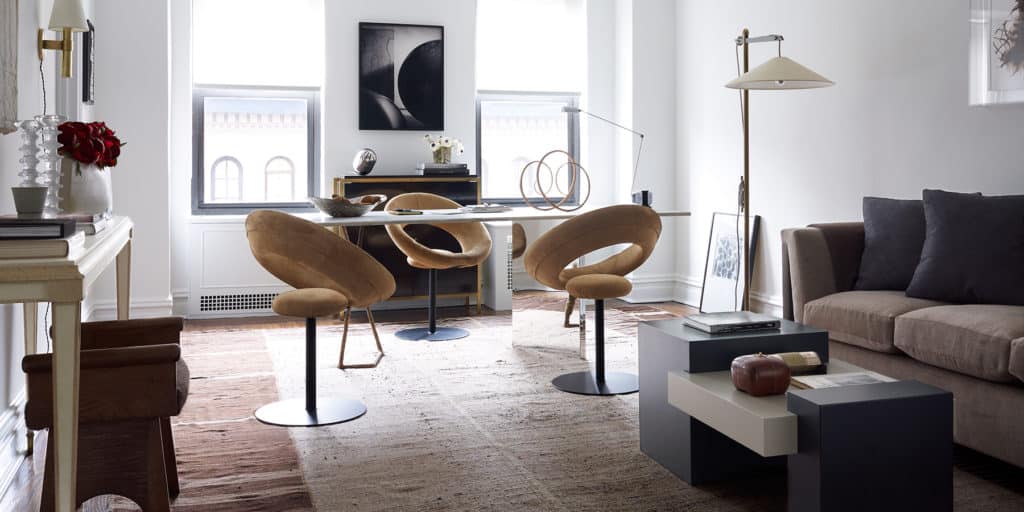 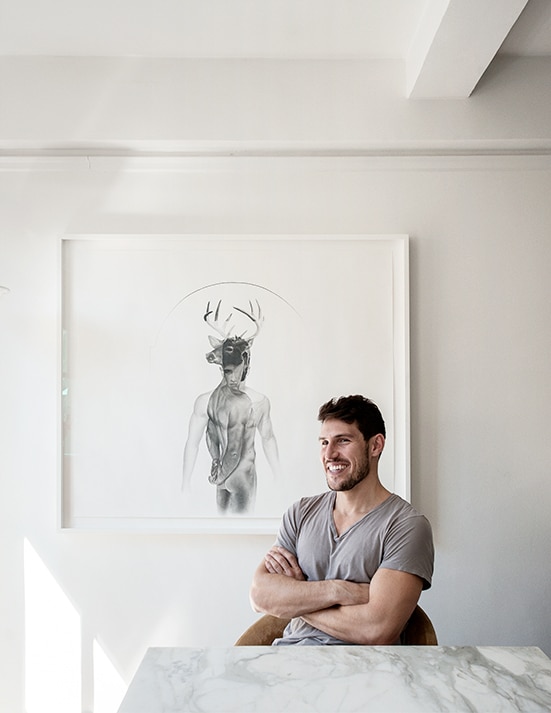 February 27, 2017Based in New York, on-the-rise designer Charlie Ferrer recently joined 1stdibs, filling his storefront with his favorite finds (portrait by Matthew Williams). Here, he’s with Taner Ceylan‘s 2012 drawing Cyparissus. Top: In his own former apartment in New York’s Chelsea area, Ferrer assembled a trio of Anel chairs by Ricardo Fasanello around an Elements table by Billy Cotton. The photograph above Cotton’s Antwerp credenza is by Andrew Cinnamon. All photos by Joshua McHugh, unless otherwise noted

If people can be born with good taste, then 35-year-old Charlie Ferrer, a Manhattan-based interior designer and decorative and fine arts dealer with an unerring eye and boundless creativity, is one of them.

Ferrer’s upbringing in various affluent leafy suburbs of New York City led, he says, to “an early appreciation of architectural and decorative beauty,” like the hand-painted Gracie wallpaper in the dining room of his family’s 1920s English clapboard house in Rye. “I knew that was really special,” he explains. “And I knew early on that I wanted to be someone who made beautiful spaces.” By the time he was 12, Ferrer was voicing opinions even about the broadloom in the hall. “It was a repeat pattern, and the scale was just wrong. I cringed every time I walked on it,” he recalls. “I told my mother the day we moved out.”

After getting a Bachelor of Arts with a major in visual studies from the University of Pennsylvania, Ferrer gained real-world experience through two years in construction management and a year’s worth of design internships. His next move was to launch MEIER/FERRER, the L.A. furniture and fine arts gallery that he curated and co-owned with Ana Meier, architect Richard Meier’s daughter. Then, in 2012, he relocated to New York to make his mark there. His arrival was heralded in a Wall Street Journal spread about his first New York apartment, a Greenwich Village one-bedroom he turned into a showcase for his stylish brand of organic minimalism, as well as a place to sleep. “I took an apartment downtown and filled it with stuff I could sell,” Ferrer says. “I reached out to Billy Cotton” – a Brooklyn-based designer of furniture and lighting — “and got him to sign up with me, along with six or seven others, and had a gallery in my little apartment.” 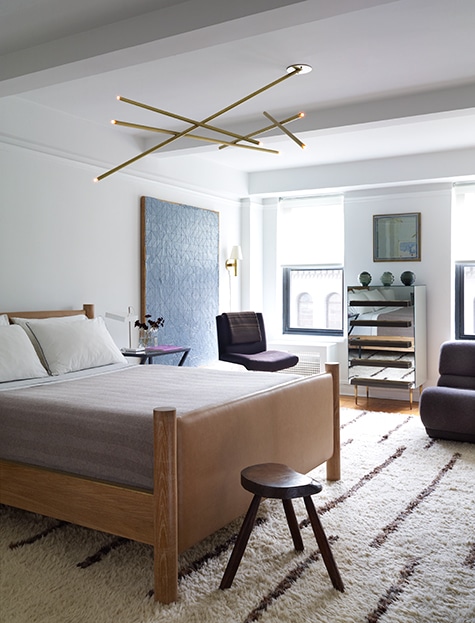 In the bedroom of the designer’s previous Chelsea apartment, Cotton’s Pick-Up 5-Stick Horizontal chandelier hangs over an RS01 bed by Robert Stilin. The ZOID nightstand is part of Ferrer’s collaboration with Ana Meier, daughter of Pritzker Prize–winning architect Richard Meier, and the Illusion dresser is by Luis Pons.

Every place Ferrer lives, it seems, possesses architectural distinction or exceptional charm. Both qualities were displayed by the vintage Laurel Canyon cottage, “with bougainvillea cascading down the ridge,” where he spent his L.A. years, a seminal sojourn that he says “opened my eyes to mid-century design.” These days, he’s in a prewar industrial building in West Chelsea, whose south-facing windows overlook the park-like grounds of a 19th-century theological seminary.

Ferrer’s business, headquartered in the penthouse of a Beaux Arts building in the Flatiron District, encompasses high-end residential interiors for clients in New York, Connecticut and Florida; custom furniture and lighting design and fabrication; and contemporary furniture sales. (Ferrer recently joined 1stdibs as a dealer.)

The expert blending of vintage, modern, contemporary and even futuristic material seems to come naturally to Ferrer, for whom the common thread is simplicity. “I love Deco,” he says, “but if we’re looking at Ruhlmann’s oeuvre, I’m going to pick a simple pupil’s desk, not some French-polished piece with lots of inlay. I always tend toward the simple.”

It took many years for Ferrer to become comfortable with the idea of being a decorator, he says, having grown up in a milieu in which “boys are meant to be investment bankers.” But he’s over all that now and embracing his calling with gusto. 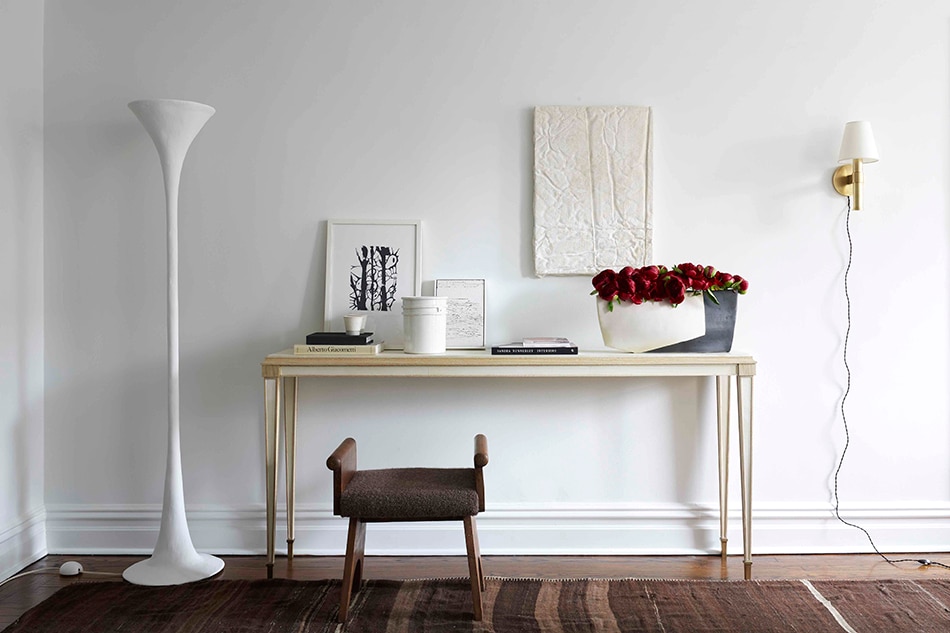 In Ferrer’s former Chelsea apartment, a plaster torchiere by Kacper Dolatowski from Ferrer’s gallery stands beside a neoclassical parchment console by Cotton. A Matthias Merkel Hess white bucket from Ferrer sits atop the table, with a gesso and cardboard work by Nancy Lorenz from Morgan Lehman above. 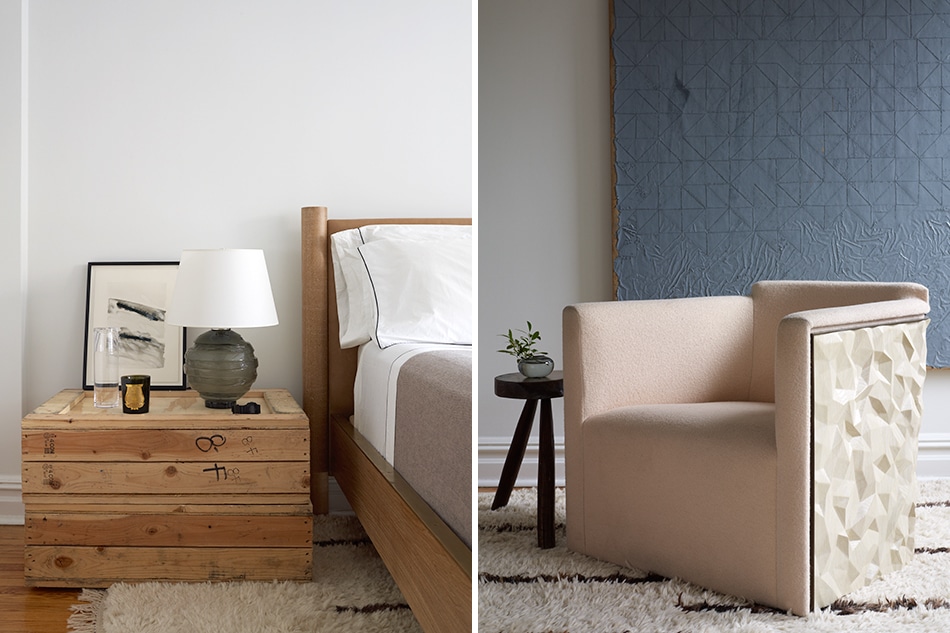 A watercolor by Paul Gervais sits beside a Gemini lamp by Andrew Hughes from Ferrer’s gallery (left) in the Chelsea pad, and a painting by Mark Hagen hangs behind a Ravitz chair by Cotton and a primitive splayed-leg stool (right). The rug is vintage Moroccan. 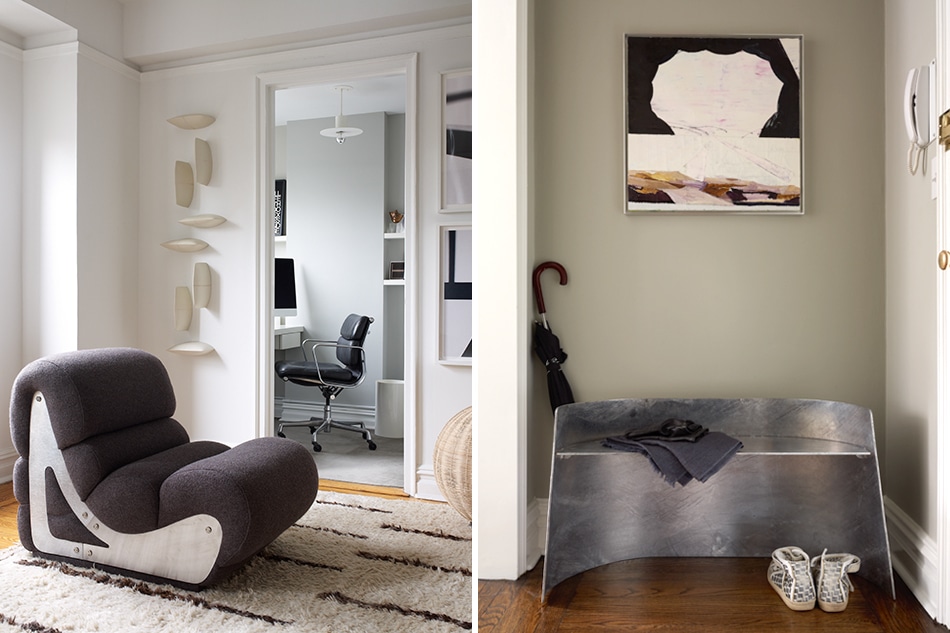 Left: A view into the Chelsea apartment’s office — past a Kappa chair from Pascal Boyer — reveals a 5-Star desk chair by Charles and Ray Eames from reGeneration. The Hat pendant is by Kacper Dolatowski and sourced through Ferrer’s gallery. Right: For the entryway, Ferrer selected a contemporary abstract Japanese painting and a Jonathan Nesci bench. 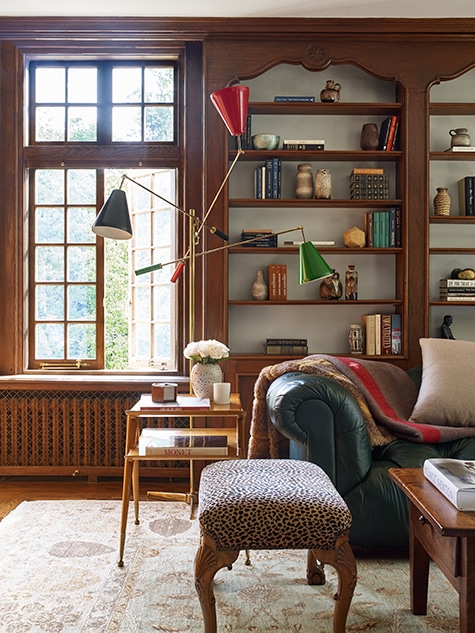 Back in the library of the first Greenwich home, a Giò Ponti side table from Stellar Union stands in front of an Angelo Lelli floor lamp from Pascal Boyer.

David Easton, the very talented traditionalist in Greenwich, Connecticut, in the 1980s and ’90s, who recently retired. His interiors were so high quality, so beautifully executed. I was lucky to chat with him a few times. For all his conventional work, he’s a man who likes sci-fi and technology and knows a lot about a range of topics. He made me want not to be a narrow-minded thinker or practitioner.

Robert Stilin introduced me to 1940s and ’50s French design and the work of Charles Dudouyt and Guillerme et Chambron. He helped me recognize the beauty in their idiosyncratic forms, taught me about patina and the subtleties of finish and how to achieve an interesting balance by mixing important pieces with less rare but equally beautiful ones.

My parents knew Ralph Pucci forever. I met him when I was 16. When I came to New York, where I’d never lived as an adult, I contacted Ralph and said, “You’re the man,” and he became a more active mentor in my life. He taught me about the contemporary furniture market and how he decides when he sees value in a designer or artist and how to exhibit that work. 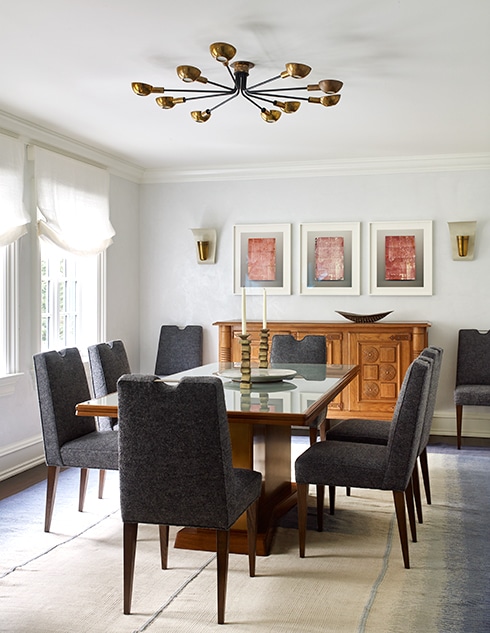 A vintage Swedish flat-weave rug from Doris Leslie Blau forms the foundation for the dining room in the first Greenwich home. Custom dining chairs in the style of Edward Wormley surround a 1950 Italian-inspired custom dining table, all by Ferrer. The 1940s oak buffet is attributed to Charles Dudouyt, and the Italian semi-flush-mount ceiling light is from rewire.

My parents decided to build a house in Palm Beach, and I saw that as an opportunity to do my first major project as an interior designer. For four years, I got to collaborate with my mother, who’s not a design professional but a very talented woman with opinions. We were in constant communication and traveled together to source things. I was really sad when it was over.

I spent two weeks in Brazil for my 30th birthday. It was like a design survey of that country. That’s where I met Olivia Fasanello and Ricardo Jr., the widow and son of Ricardo Fasanello, whose estate I now represent in North America. The next day I visited the concrete bunker outside Rio where his chairs are still made. I also went to Brasília, whose master plan Oscar Niemeyer dreamed up. The architecture is otherworldly, super-futuristic. You don’t want to spend the night there.

Best time of day to work:

Morning, afternoon and evening. Whenever I get fired up about something and the good ideas start rolling, that’s when the best work happens.

I don’t care for trends. I’m either looking forward or backward. I’m not obsessed with the now. 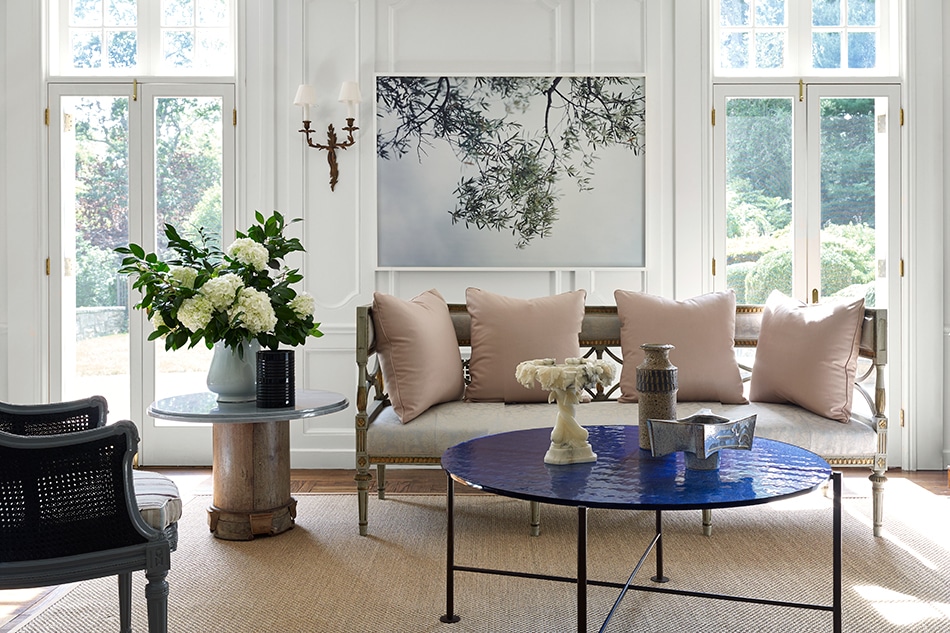 In a Greenwich, Connecticut, living room, a 1950s French Raphael Raffel coffee table with a blue glass top, found at Pascal Boyer, sits in front of an 18th-century French neoclassical settee covered in linen damask. Between the windows hangs Olive Trees, Looking Up, 2003, by Joann Verburg. 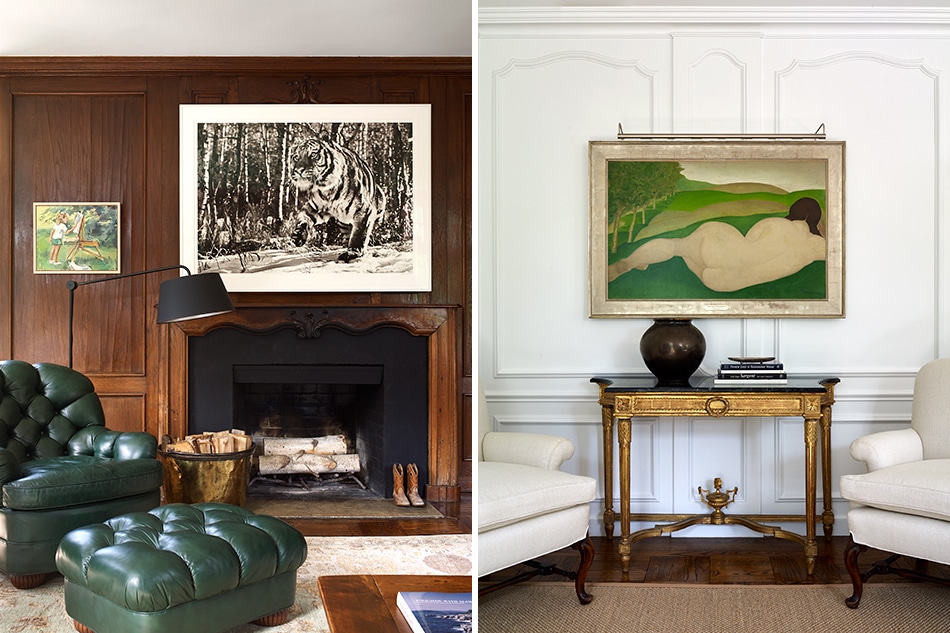 Left: The wood-paneled library of the same Greenwich home features a contemporary floor lamp by Christophe Delcourt from Ralph Pucci and a photograph by David Yarrow from the client’s own collection. Right: Elsewhere in the home’s living room, a pair of 19th-century English chairs flank a neoclassical gilt console. Venus by Arnold Friedman hangs above. 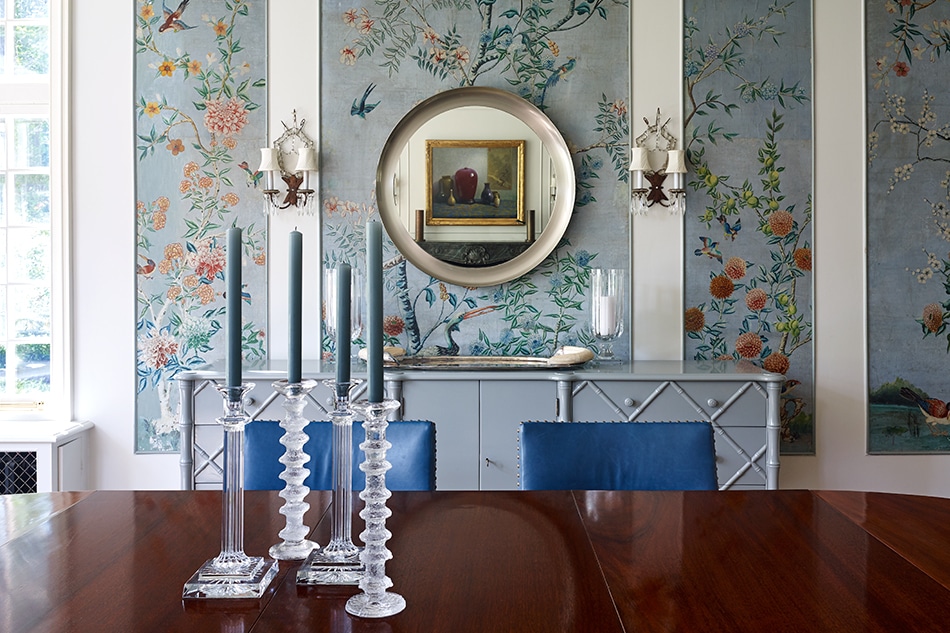 Timo Sarpaneva Festivo candlesticks, 1966, from Bernd Goeckler mix with candleholders from the client’s own collection. Ferrer acquired the vintage chairs, in the style of Kaare Klint, through WYETH. The walls are covered with hand-painted silk panels. The Scandinavian modern mirror came from a Paris market, while the patinated silver tray with faux ivory handles is from Mantiques Modern. 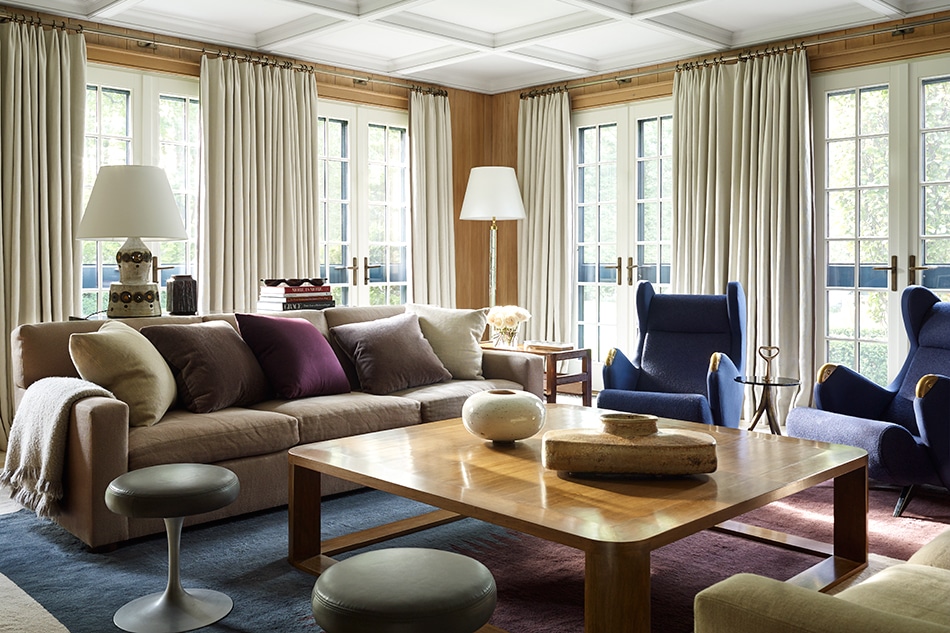 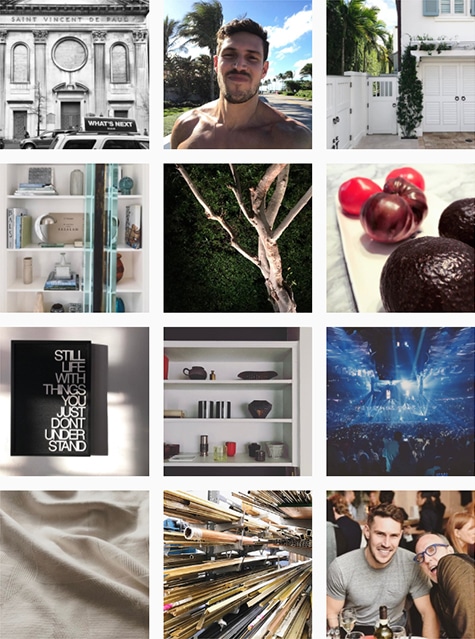 The xx, Marina and The Diamonds, Phantogram

A pile of unread books. I wish I read more. The last book I read was Philip Roth’s Everyman. That’s a New Year’s resolution: slow down and read.

If you could choose just one piece of furniture for an empty room:

A Brazilian chair. It could be Fasanello, Sérgio Rodrigues or Joaquim Tenreiro. They’re all so unique. A chair like that gives you function and a visual bearing. It sets the tone.

It’s super-simple: the header is a pinch pleat with sew-on rings that hang off a gutsy bronze rod that we custom-make. Curtains are beautiful solid linen. It’s an architectural gesture more than a decorative one; it’s about softening the light. 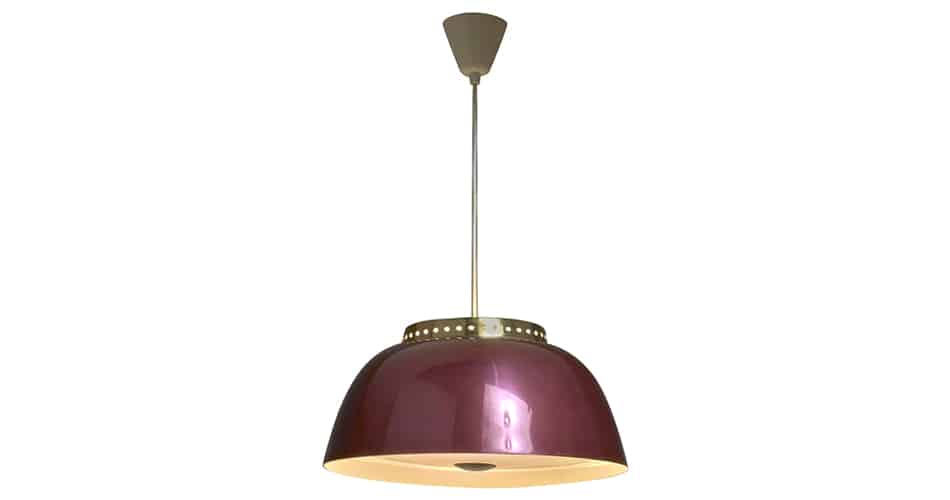 “I selected this fixture for its elegant simplicity. Its clean feminine lines and unusual color make it perfect for an entry, powder room or vestibule. Functionally, I like that it throws light both up and down.” 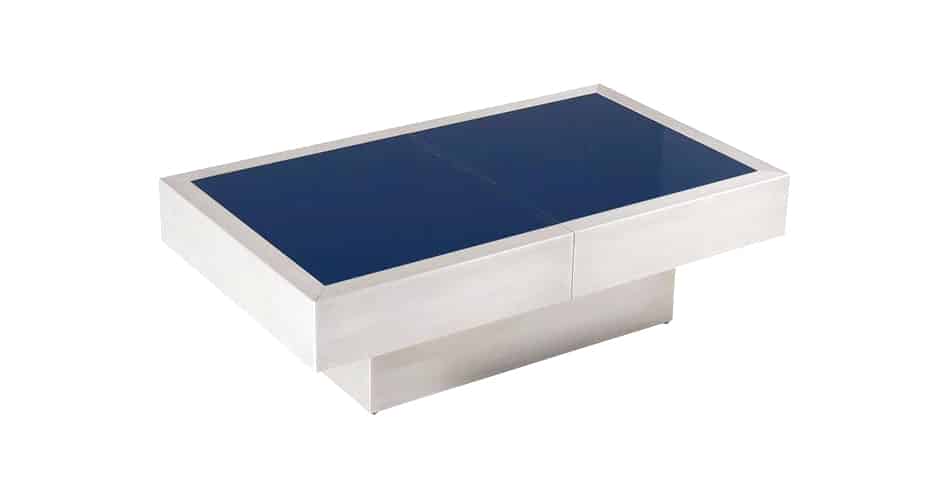 Extendable cocktail table in the style of Willy Rizzo, 1970s, offered by MORENTZ

“The is a perfect foundational piece for a New York apartment. Its modernist shape and strong proportions make it feel important. The blue glass adds lightness, while the mechanical extensions provide unexpected utility. This table gives a lot for a good price.” 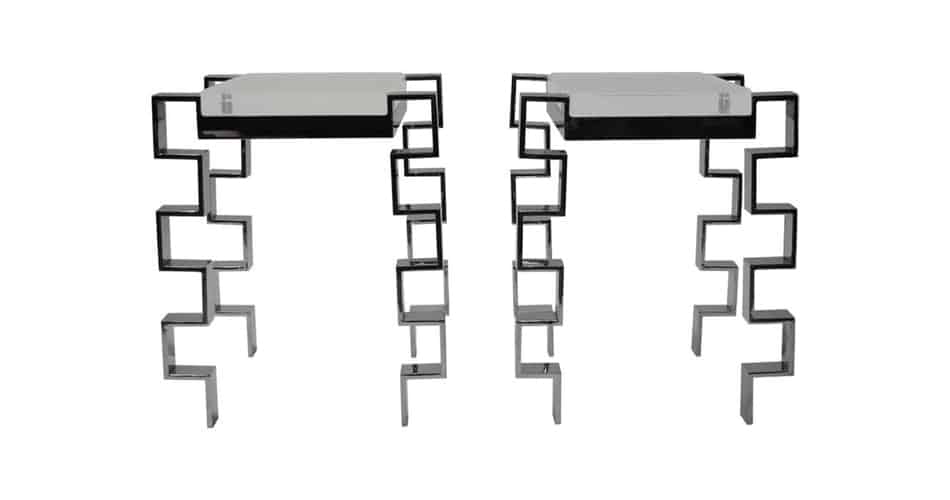 “These stylized tables are sharp. To my eye, they’re the perfect distillation of the Hollywood Regency style. I like the mix of metal and glass and the playful gesture of the legs.” 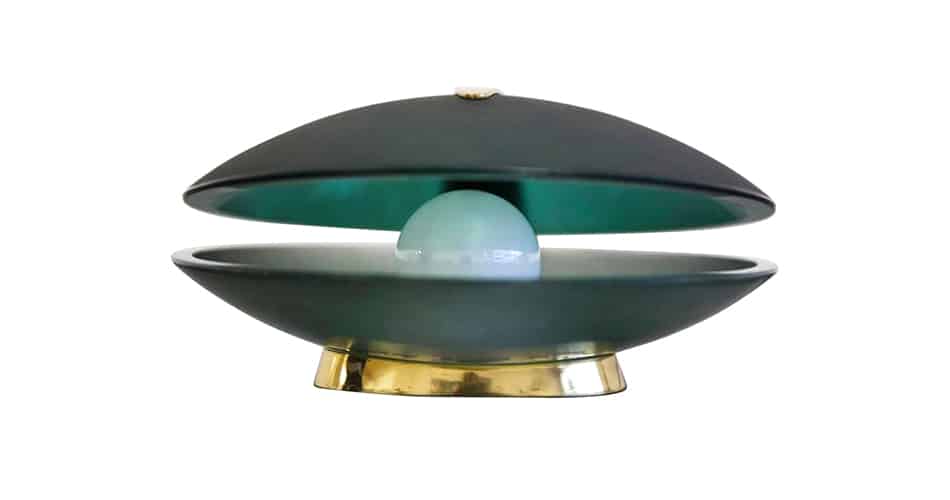 “Friends know well my obsession with vintage objects. Clients learn quickly my obsession with vintage lighting. It only follows that vintage light sculptures have a special place in my heart. With this one, Ingrand very wittily translated a naturalistic reference (clam shell) into a functional architectural gesture in color. I would place this on a table, a dressing vanity or a shelf.” 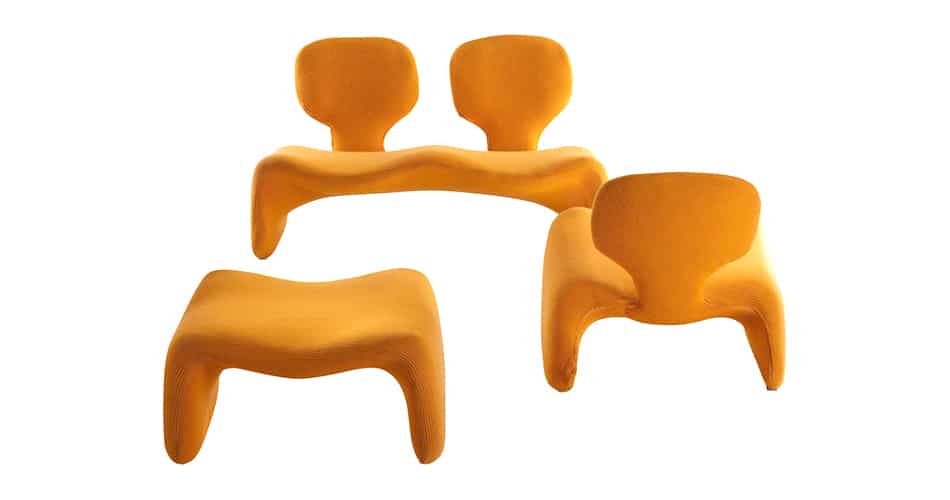 “I like science fiction. I like The Jetsons. This set makes me think of both. Whether by Verner Panton or Pierre Paulin or Pascal Mourgue, I am attracted to the idiosyncratic forms of the 1960s and ’70s. I love the color of the original upholstery and the anthropomorphic qualities of the chair. This furniture is optimistic and energetic.” 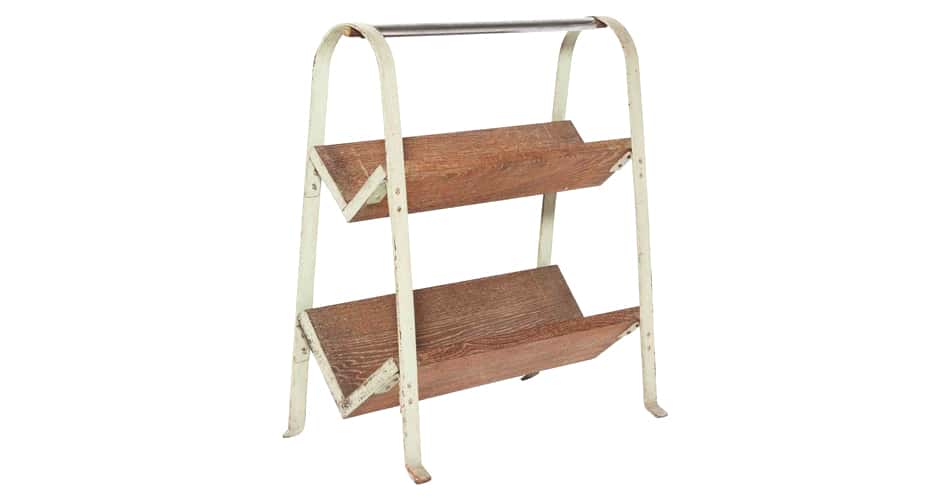 “I prefer the simpler designs of Émile-Jacques Ruhlmann, Adnet and others of the French Deco tradition, especially those pieces that show the wear of their age. This item is a great example. The heavy patina is beautiful because it is rough. I wouldn’t hesitate to mix this in among more refined pieces in any space.” 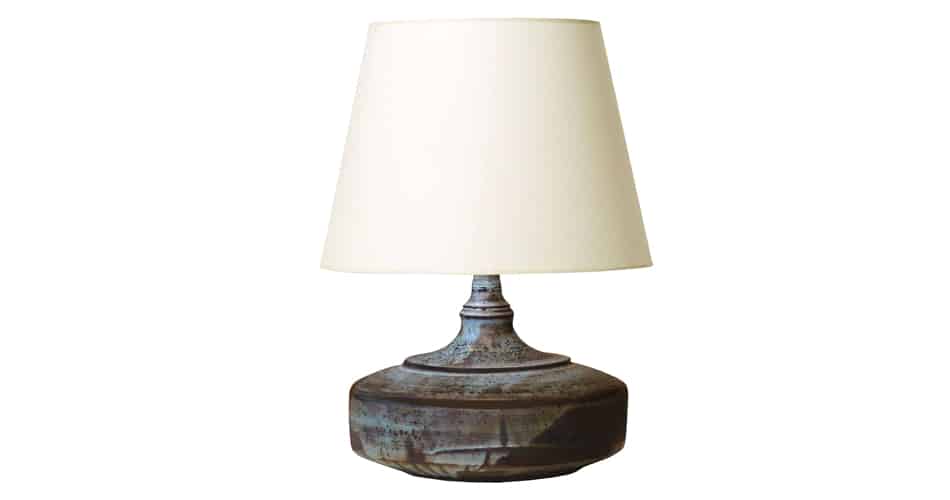 “Ceramic is a medium that I incorporate into my work regularly in the form of vessels, objects and/or lighting. I love everything about this lamp by Jacques Chaillou — its unusual squat, turned shape, the rich movement and texture of its subtle and sophisticated glaze. It would add warmth and depth to any table.”