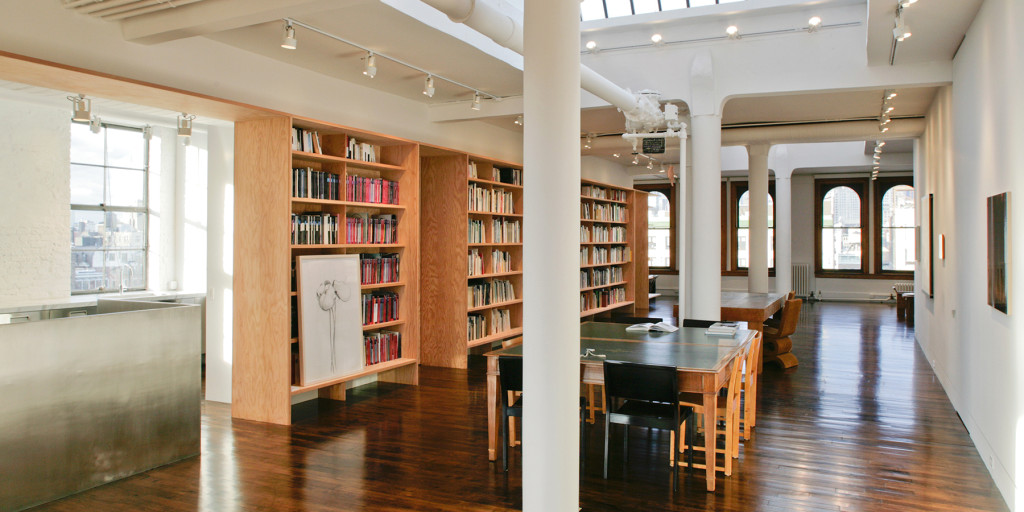 She may not yet be a household name, but with her eye for volume and natural materials, Paris- and New York–based Charlotte Macaux Perelman is well worth knowing. 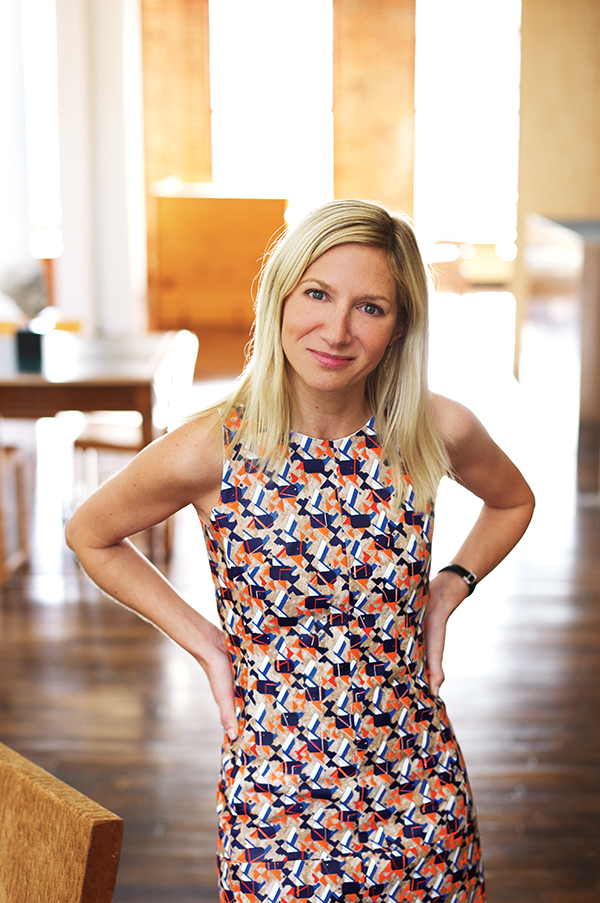 Interior designer Charlotte Macaux Perelman is not a design celebrity — not just yet, anyway — but she has worked with many people who are. She began her career in the office of Philippe Starck, whom she remembers as being “very open-minded, full of humor and completely astonishing.” While there, she collaborated on the Sanderson Hotel, in London, with hotel guru Ian Schrager. Later she headed up the design department of another hospitality king, André Balazs. Her first project after opening her own firm, Studio CMP, in 2005 was equally high-profile: the renovation of New York’s Royalton Hotel. And in November 2014, she added one more famous moniker to her résumé when she was named co-artistic director of Hermès’s three homeware brands — Hermès Maison, Puiforcat and Saint-Louis — a title she shares with one of her close friends, the curator and art-book publisher Alexis Fabry. “Charlotte has a very sharp eye,” says the French luxury house’s overall artistic director, Pierre-Alexis Dumas. “She’s very quick, exacting and astute.”

Macaux Perelman heads up interior design offices in both Paris and New York, and she has projects on both sides of the Atlantic. She cites the work of the Mexican architect Luis Barragán as one of her main influences. “It’s extraordinary in its simplicity and almost monk-like sobriety,” she says. Another idol is Aldo Rossi, because, in particular, of the archetypal striped beach huts with triangular roofs that he built in Elba in the 1980s. As for her own aesthetic, she likes to think it expresses a “casual chic” and a certain timelessness. She favors largely natural materials and has a particular predilection for both marble — “It has a classicism I like” — and woods such as oak and pine. Strong spatial effects are also central to her work. “Particular attention is paid to volumes, and there’s a form of astringency to what she proposes,” notes her friend and collaborator Fabry. “Nothing is superfluous.” Adds one of her clients, the New York–based art dealer Franck Giraud: “Her style is both refined and natural. There’s a real architectural sense that structures the space.” 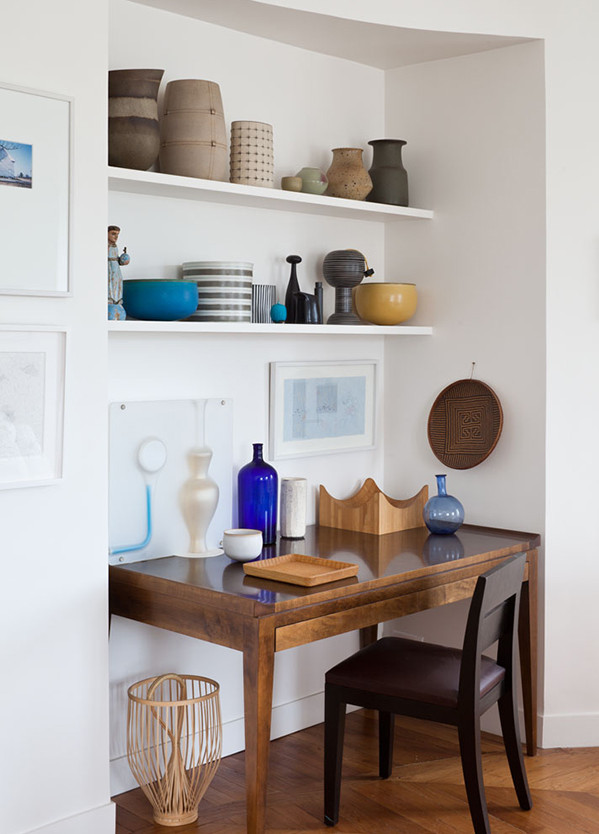 “I love this accumulation of crafted objects, such as the ceramics from Alev Siesbye, Ettore Sottsass, Bodil Manz, Gustavo Pérez and Robert Deblander, with hand-carved wooden Japanese objects and some old baskets,” Macaux Perelman notes of a living room alcove in a home in the Passy area of Paris.

Born and raised in Paris, Macaux Perelman trained as an architect, attracted to that profession by the possibilities she believed it offered for travel. She got a taste for adventure from her father, who ran an import-export business. “He was very curious and traded with China back in the sixties, when nobody went there,” she recounts. He also firmly believed that his daughter should speak English. So from the age of 10, Macaux Perelman was packed off during school vacations to live with families in the United States. The father in one of those families was an electrician in Vermont. “He took me around for a whole day showing me the sockets he’d installed on building sites,” she says, laughing. Another host family, this one in Upstate New York, made plastic Christmas trees for a living.

She studied architecture at both the Paris La Seine and Paris Belleville schools and joined Starck’s office in 1997 after a friend who worked as his assistant  tipped her off to an opening. At first, she was not particularly enthusiastic. “For me, Philippe Starck made toothbrushes,” she says, “and I still had utopian ideas of changing the world through architecture.” After a week, however, Macaux Perelman had changed her mind. “I entered a world where everything was possible. There was just such great artistic freedom.” She also realized she was in the presence of a genius. She still is clearly filled with awe when recalling the genesis of the Starck-designed Faena Hotel, in Buenos Aires. “In just one hour, he drew up the whole concept — from the design of the door handles and the bedrooms to the atmosphere and story he wanted to tell,” she relates. “It was just mind-blowing!” 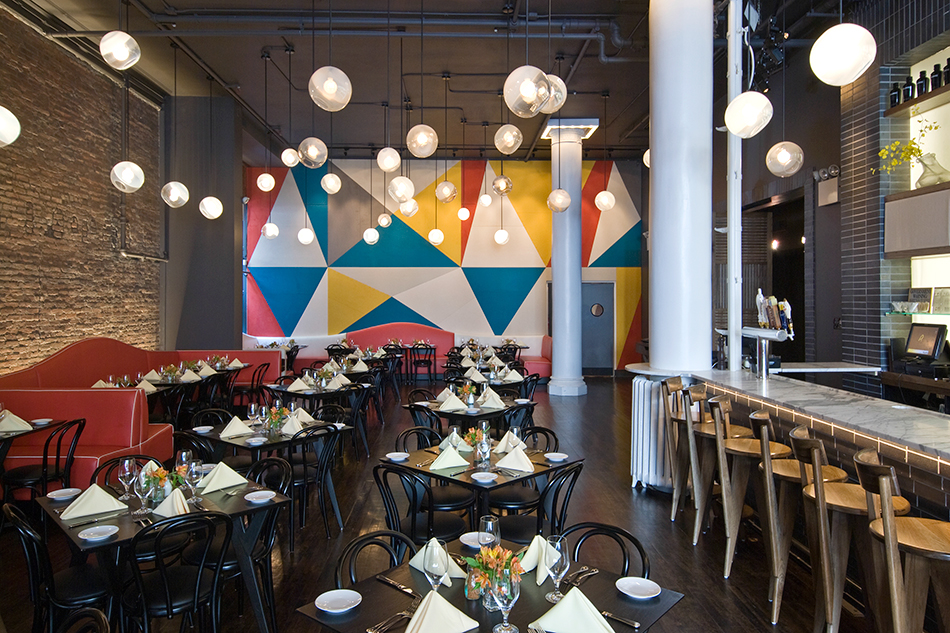 To create her scheme for the New York restaurant Gravy, Macaux Perelman took inspiration from the atmosphere of the American South, which the eatery’s owners hoped to capture. Says Macaux Perelman: “I reinterpreted the colorful murals that seem, for me, important in contemporary American art.” 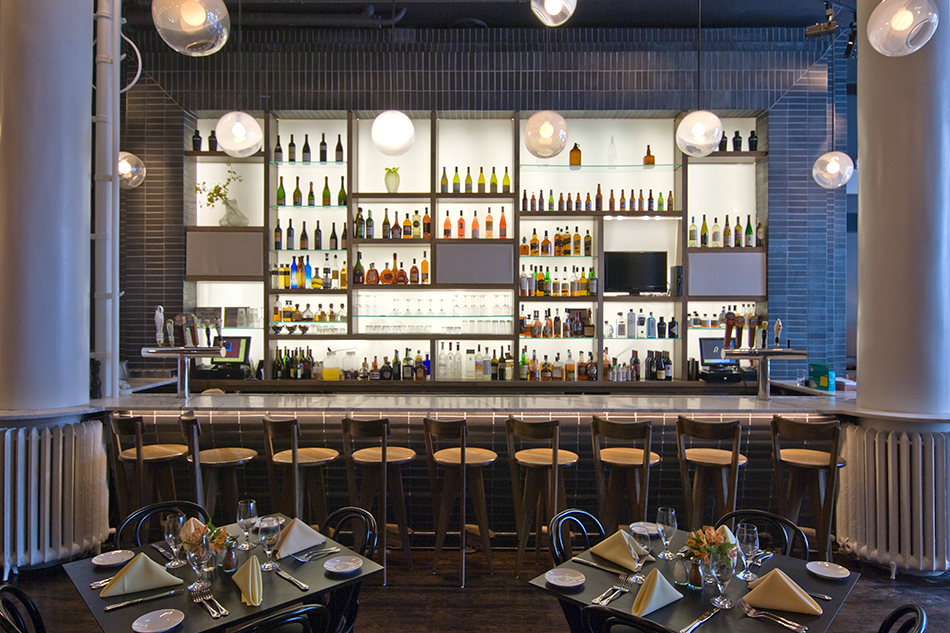 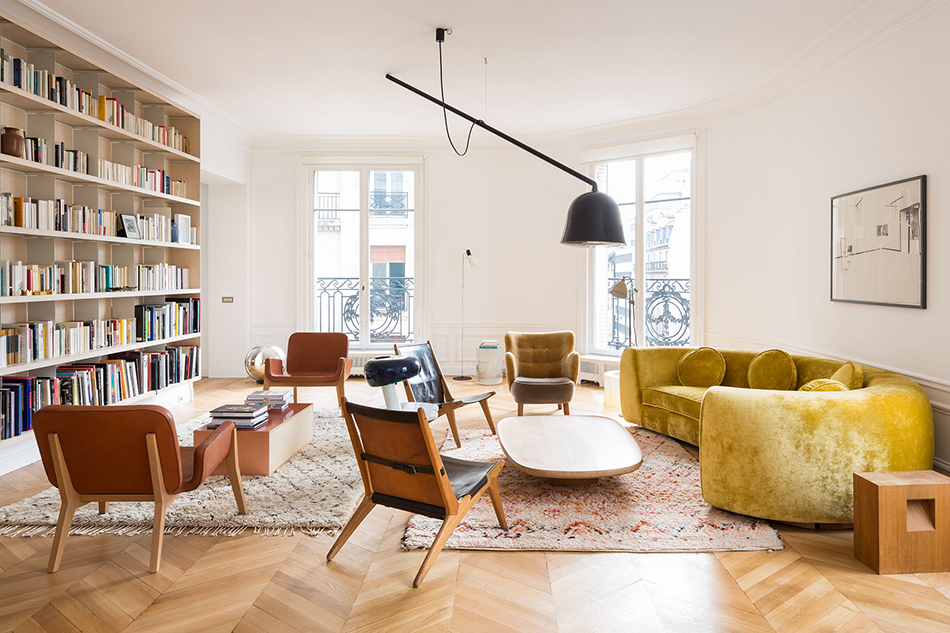 For the living room of the residential-feeling Paris hotel Alma Marceau, Macaux Perelman combined Scandinavian armchairs with what she calls “some of the greatest contemporary pieces of furniture”: a limited-edition ceiling light by the Bouroullec Brothers and bookshelves by Martin Szekely. 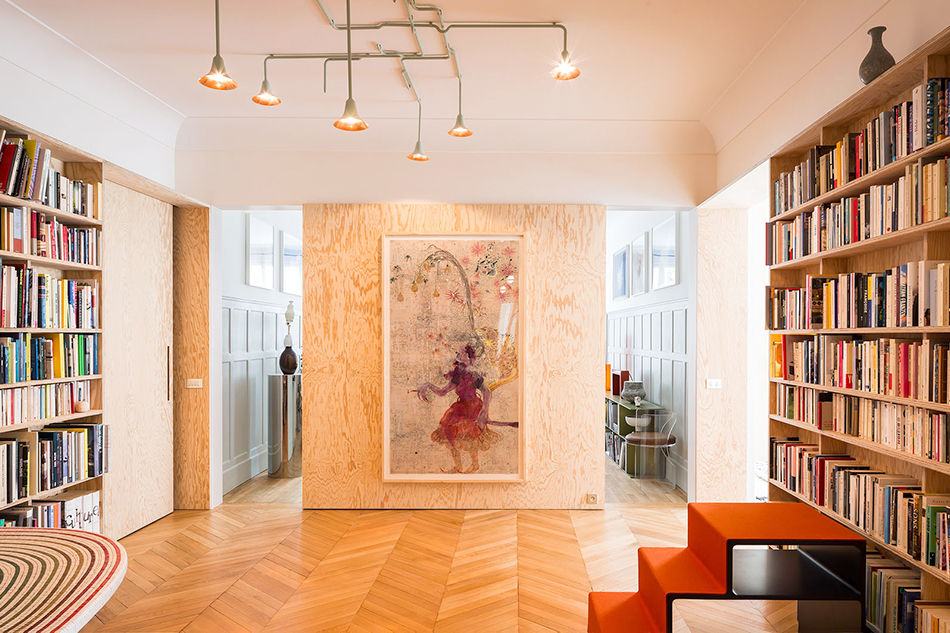 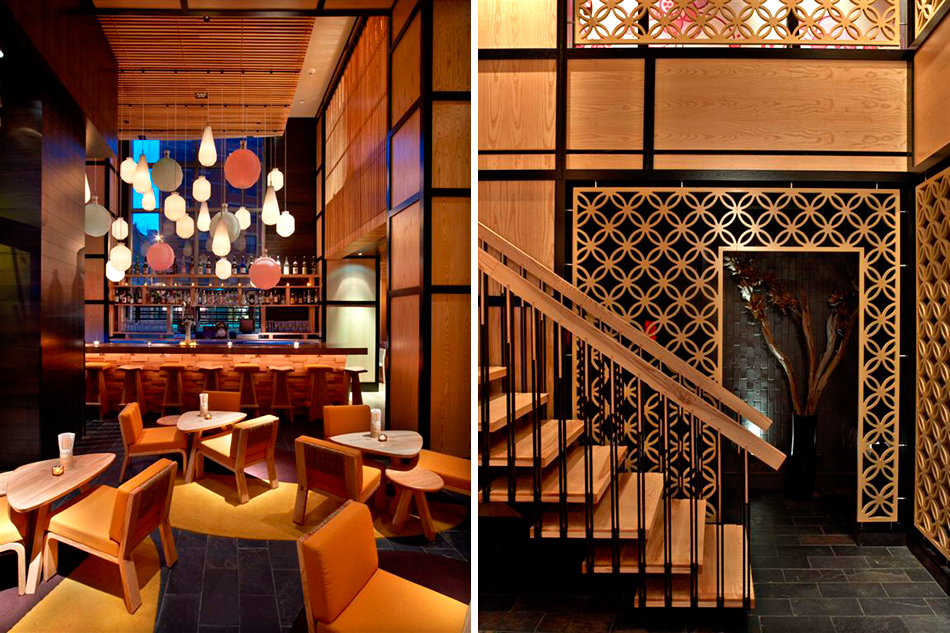 Studio CMP designed all the furniture for the izakaya-style Japanese restaurant Tanuki Tavern (now closed), in New York’s Meatpacking District. “I wanted to re-create a traditional Japanese cantina with a twist of Japanese contemporary culture, using strong colors and pattern,” the designer says. “The wooden screens helped me to create geometrical rooms. I like the feeling of craftsmanship in this project.” 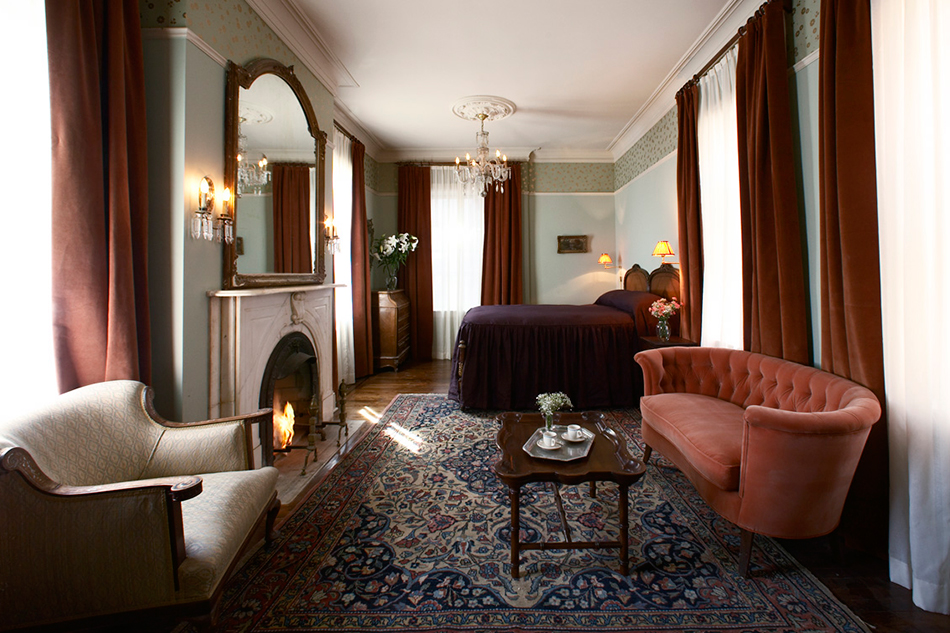 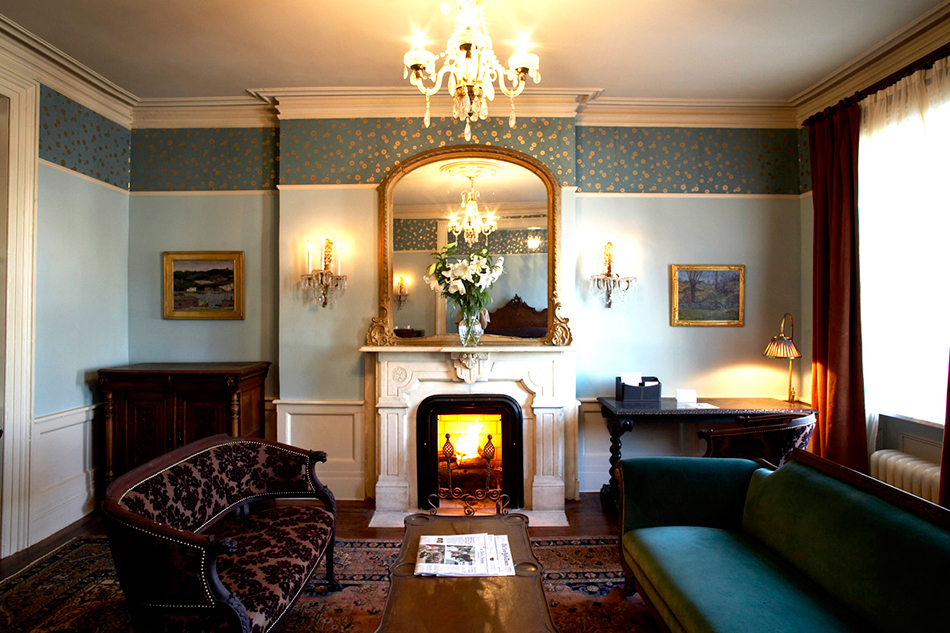 “It feels like it could be an old house from the nineteenth century,” the designer says of her concept for Lafayette House. 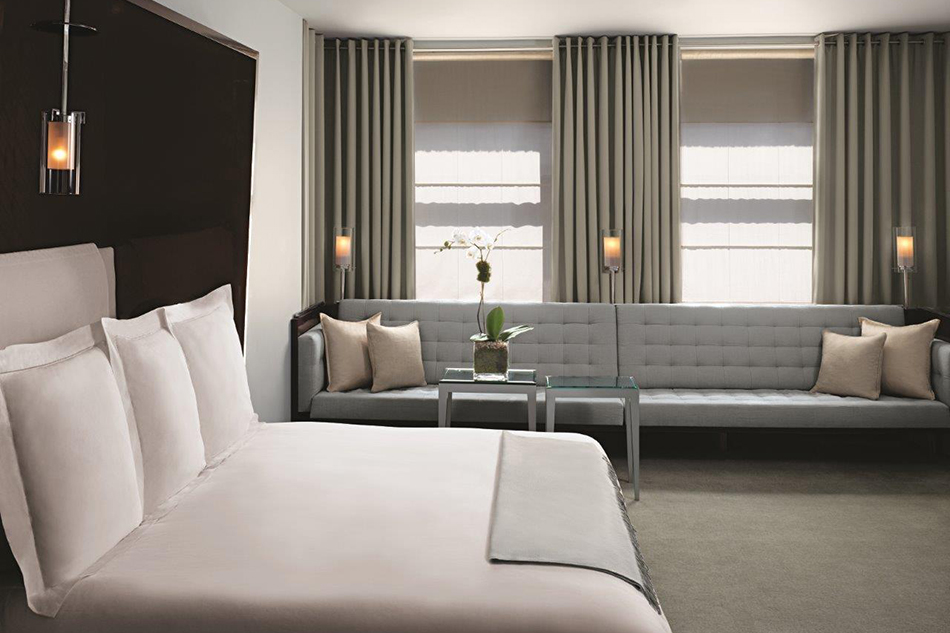 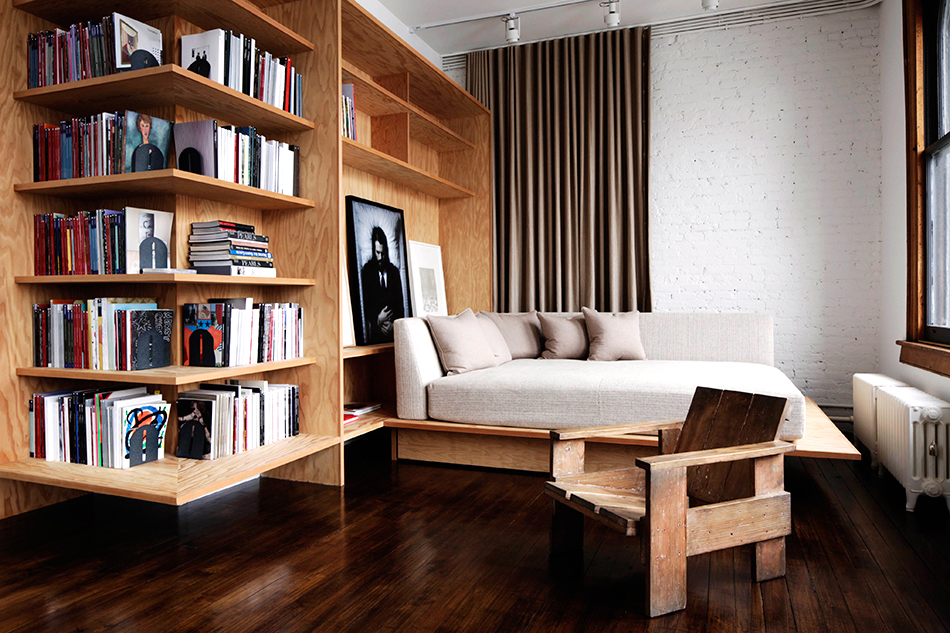 Back in the University Place loft, a bookshelf of plywood — a material frequently used by the designer — includes a built-in chaise. A floor-to-ceiling fabric curtain softens the white-painted brick wall. 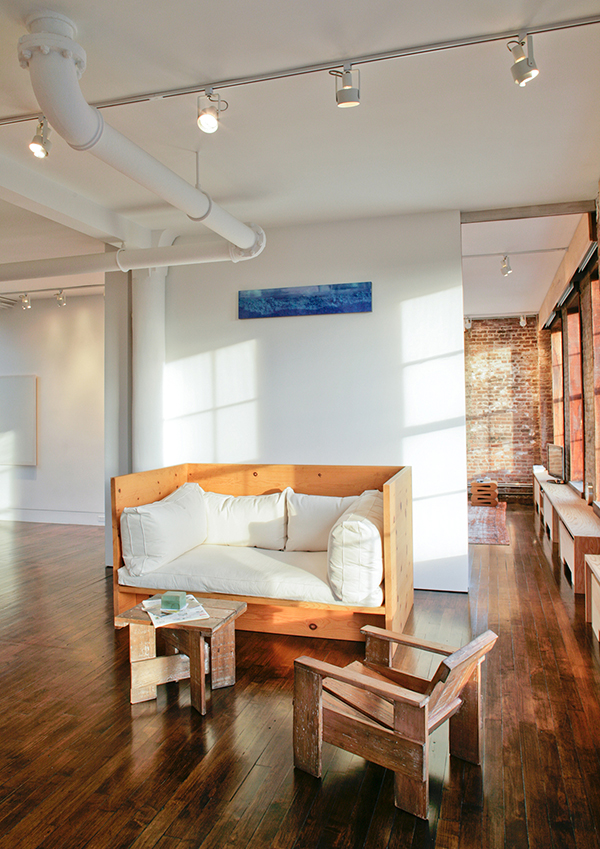 To maintain the feel of the downtown loft, on University Place, Macaux Perelman left the plumbing pipes and electrical system exposed. At the south end of the space, a Donald Judd sofa faces an early Gerrit Rietveld armchair, with a Louise Lawler photograph hanging behind.

In 2000, Macaux Perelman moved on to work for the interdisciplinary design firm Rockwell Group, in New York. “It was there that I learned that everything is possible in the States,” she says, “that ‘no’ doesn’t exist. If David Rockwell wanted something, he made it happen.” She most notably remembers 50-foot-high prototypes of the cruise-ship interiors he created for Disney. Her dream, however, was to work with Balazs, who hired her in 2003. “He’s the opposite of Starck,” she declares. “Starck imposes his style on a space, whereas André is very respectful of what’s already there. He advances with small strokes.” She particularly recalls her collaboration with him on the Raleigh Miami Beach hotel. “The previous decor included kitsch pink marble and silver columns with palm-leaf motifs in the lobby,” she says. “I thought we’d remove them, but he told me, ‘Don’t touch anything. We’ll simply disguise them a little.’ ”

After two years with Balazs, Macaux Perelman set up her own firm, initially basing it solely in New York. In addition to the Royalton, her commercial projects in Manhattan have included two restaurants — Gravy and Vitae — and Lafayette House, a 15-room Noho hotel, owned by hip hospitality entrepreneurs Eric Goode and Sean MacPherson, that has counted among its guests such celebrities as Madonna. Macaux Perelman decorated the small townhouse property with mismatched furniture sourced mainly from antiques stores in the bohemian Upstate New York town of Hudson. “It feels like it could be an old house from the nineteenth century,” Macaux Perelman says of her scheme there. 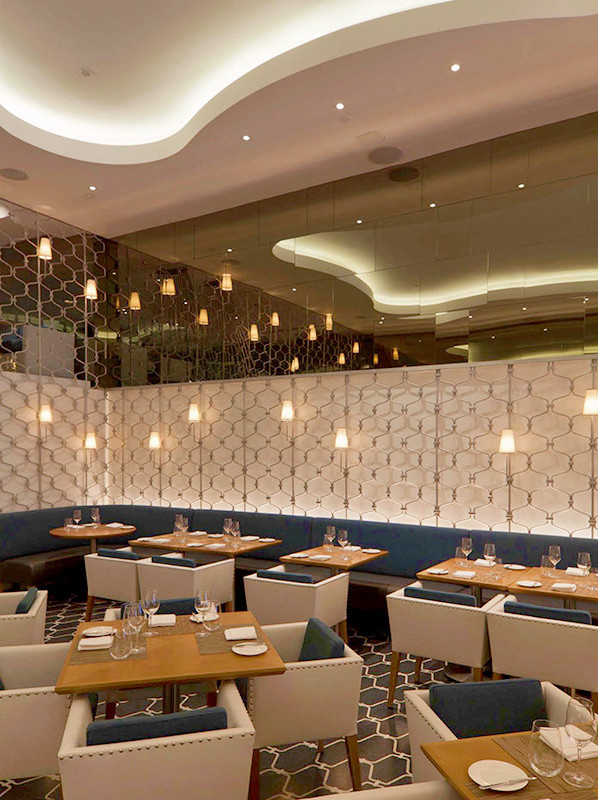 A respect for history was key to one of her most striking projects — the renovation of a loft on University Place with a tragic past. It was left empty for eight years after its previous owner, an artist, was hit by a truck and fell into a coma. “Brushes were left standing in paint pots and the fridge was still almost full,” she says. “It was quite spooky.” Macaux Perelman kept the irregular wooden boards and cracked, raw-concrete ceiling and insisted that the plumbing pipes and electrical system remain exposed. Her main addition was a 100-foot-long bookcase — an element she favors in many of the interiors she creates, although not necessarily at such a large scale. “For me, bookcases are architectural objects that help to structure and define a space,” she explains.

In 2009, she decided to return to Paris, where she lives today with her journalist husband, daughter and twin sons in a typically Haussmann-ian building. Professionally, she splits her time between her own interior design projects and her duties at Hermès, which consist of developing new product lines, the first of which will debut at Milan’s Salone del Mobile next month. “It’s really engrossing,” she enthuses. “We have completely free rein to do whatever we want.” She doesn’t rule out returning to her first love, architecture, one day — but only in a very modest way. “I’d love to design a house in a remote spot, like on a cliff in Ireland,” she asserts. “Something very small and sober, the size of a hut.” 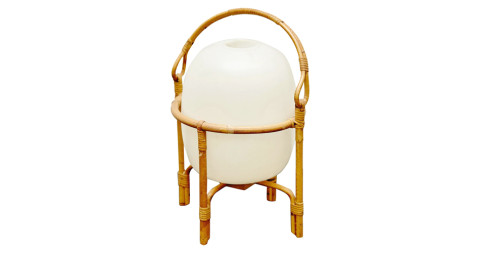 “This lamp makes great use of bamboo as a structural element. It has been copied many times, but the original model is the best.” 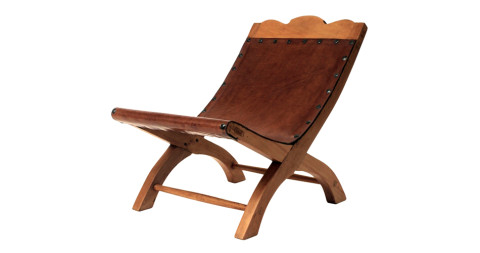 “I love vernacular architecture and furniture, and this chair, with its clean lines and use of such craft materials as leather, is a nice example of simple and strong Mexican furniture design.” 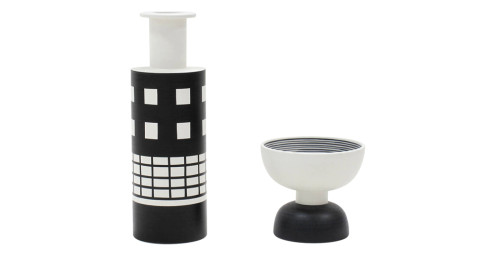 Shop Now
Ettore Sottsass glazed ceramics, 1986, offered by Hildebrandt Studio
“Ceramics always appeal to me because of their texture, their color and the hand of the craftsman that’s visible in each item. These Sottsass examples are no exception.” 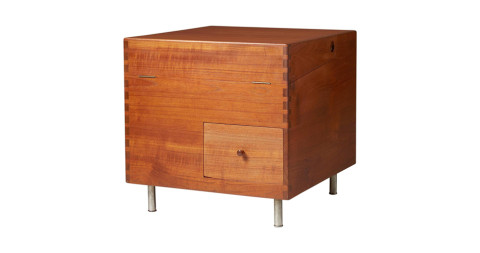 “With its square shape, functionality and useful compartments, this piece of furniture is just perfect, a magnificent object and a treasure.” 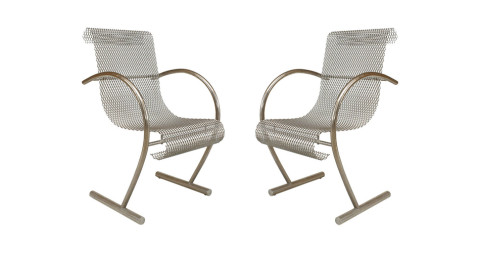 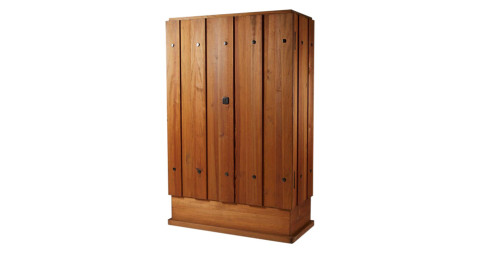 “With this cabinet, you can very much feel the gesture of the artisan who made it. It’s not an industrial piece.”