As temperatures drop and city life does a pre-holiday dip, the time may be right to pack your bags for a weekend in Hudson, New York. Just a two hour train ride from Manhattan (through some incredible fall foliage, we might add), the historic town has grown from the downtrodden whistle-stop it was in the 1980s to a hotbed for creative entrepreneurs and artists drawn by the city’s architecture and laid-back lifestyle. Among them? Over 70 antique and vintage dealers specializing in everything from the neoclassical to industrial to midcentury modern. Below, we’ve profiled six of our favorite local dealers and asked them for their tips on the best places to eat and drink while you’re antiquing your way through town. 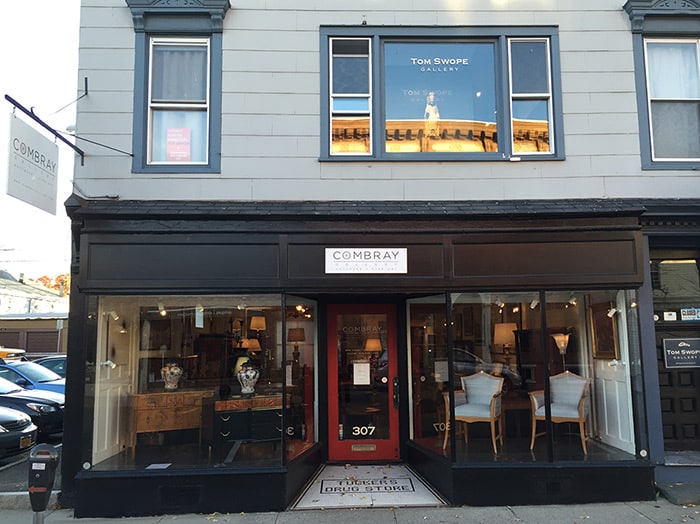 Owner Zoran Popovic got his start at Ritter Antik in Manhattan, but made the move to upstate New York for the quality of life. He opened Combray Gallery on Warren Street, Hudson’s main thoroughfare, in 2013.

Specialty: I deal only in antiques from Sweden, France, Austria, and Germany, and I focus on the 19th-century neoclassical in addition to 20th-century styles like French Art Deco and Swedish Grace pieces. I don’t just buy and sell, I have everything perfectly restored and offer restoration and upholstery services as well.

Favorite listing: I would have to say the Swedish Historicism Semaniere. Most neoclassical and historicism semanieres coming out of Europe tend to be in walnut and mahogany. This one is striking due to the light olive ash burl wood.

While you’re here: I like to send people to a Swedish restaurant down the street called Da | Ba. It’s an interesting, unexpected option here in Hudson, but very high-end, with great Scandinavian meatballs. Farmer & Sons is a new bed and breakfast that serves high-end cocktails with an ice cube so big it could kill you! 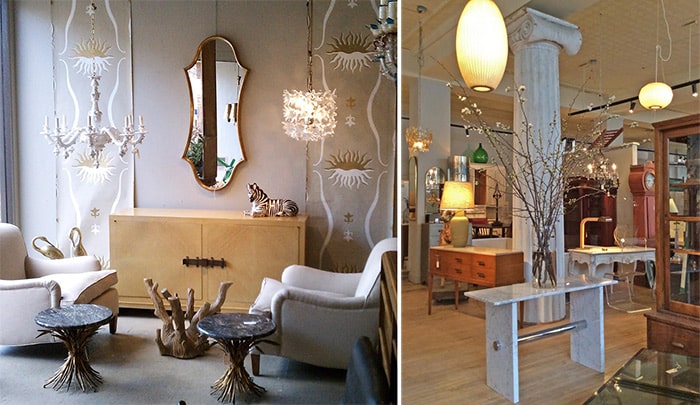 Owners Kurt Smith and Kevin Regan both hail from Rhode Island where each of them had their own antiques store, in Providence and Newport respectively. They fell in love with Hudson after a few visits to the town and in 2007, opened a shop together on Warren Street.

Specialty: Twentieth–century furniture and lighting makes up about half of our inventory. From there it’s a free for all—interesting industrial pieces and lots of great garden furniture and sculpture. We pretty much always have something from Salterini in the shop.

Favorite listing: We have a 1970s Romeo Rega brass and chrome cocktail table that is 5’ square. The scale of it is incredible. There’s also this charming silver leaf chest by Kittinger. It was originally made for flatware but people like to use them for housing jewelry as well.

While you’re here: Talbot and Arding was opened by a British woman who used to work with Alice Waters. They have duck confit, great vanilla custards, and lots of other delicacies. Bonafiglio and Bread has the most amazing croissants you’ve ever tasted! I’d also recommend Rivertown Lodge for those staying overnight. 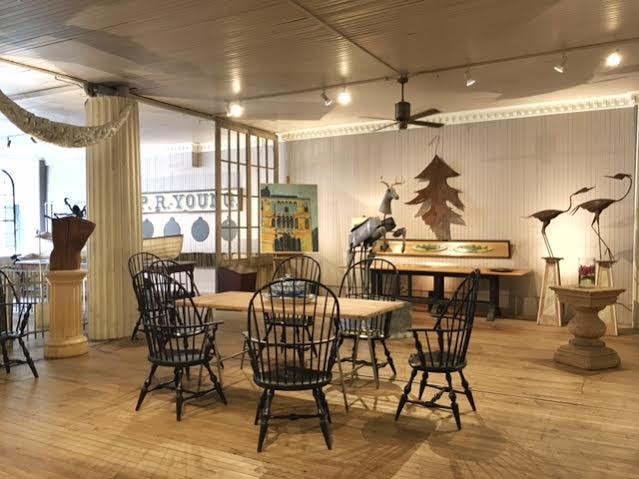 Owner Vincent Mulford was born and raised in Hudson and got his start selling antiques at the Brimfield Antiques Show. In 1990, he opened his 4,800-square-foot shop on the 400 block of Warren Street, deserted at the time. Articles in the New York Times, Elle Decor and World of Interiors soon followed.

Specialty: The general term eclectic works, though I’m not wild about that word. I carry furniture and objects from all periods and in all styles that I source mostly from New England. Everything I carry speaks to me. I never look at designer names — I look for quality.

Favorite Listing: Probably the galvanized Tin Palm Tree. It’s from the 1970s and came out of an estate sale. It takes a long time for galvanized tin to oxidize and this piece has some great age to it. I’ve never seen one like it. In New England, it’s the next best thing to a vacation in Florida!

While you’re here: We have this place called the Basilica Hudson. It’s a big Victorian Industrial building that Melissa Auf de Maur, the former drummer for Smashing Pumpkins, bought. She does these outrageous musical events down there in the summertime, and then other art events throughout the year. We also have Club Helsinki, which has music all the time and you can eat there too. 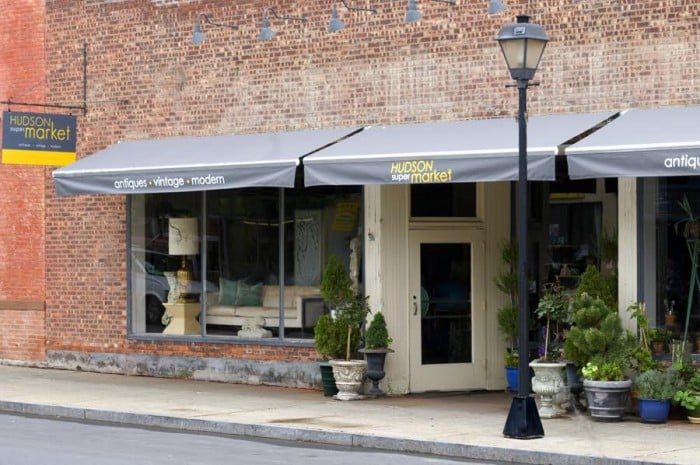 Owner Able Sun fell in love with Hudson’s architecture while here on vacation, and then wound up buying a second home. In 2002, Sun left his career as an attorney in Manhattan, and opened his 7,000 square foot shop in an old grocery store on Warren Street.

Specialty: I carry everything from mid-century to American Empire — I don’t just like a specific look. I do think I’m most known for my Milo Baughman pieces. I always have at least one in the shop.

Favorite Listing: I would say the Pearsall sculpted lounge chair. I love everything about the design — the curves and especially the grasshopper-like legs.

While you’re here: Farmer & Sons is so well done. The design, the dinner menu, even the service was impeccable. I like to go to ÖR on 3rd Street for drinks. It’s a big open space but it’s very homey, with large farm tables and a fireplace. 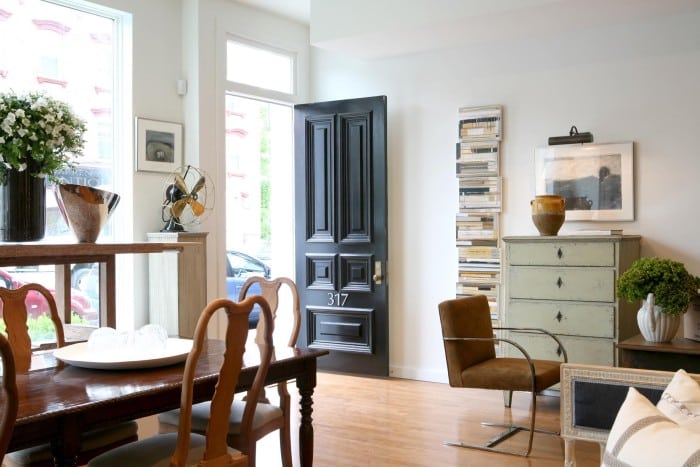 Michael Cox and Mary Foley started Foley & Cox Interiors in Manhattan in 2002 and found that, when traveling the globe on buying trips, they had a hard time passing up on pieces that didn’t have an immediate home. With a large and growing antiques inventory, they opened Foley & Cox Home on Warren Street in 2008.

Specialty: Seven years ago we really felt the Scandinavian aesthetic. Then we took a trip to Istanbul and we decided to make a suzani statement. I would say that one thing that is a constant with us is that we create beautiful vignettes that mix the new, the old and the repurposed to showcase how we approach our interiors. We also carry new products — custom pieces that we’ve designed along with smaller items that we discover at gift shows like Maison D’Objet.

Favorite Listing: One piece that is really fun and unique is from a designer we discovered in Paris. It’s the Helix Lamp by a woman named Valentina Giovando. It’s a great statement piece that bridges the gap between lighting and jewelry.

While you’re here: Right next door to us is a little, adorable local hangout called Red Dot. They have a great burger and a beautiful little garden out back. It’s very much a local hangout. We always run into three or four dealers when we’re there. 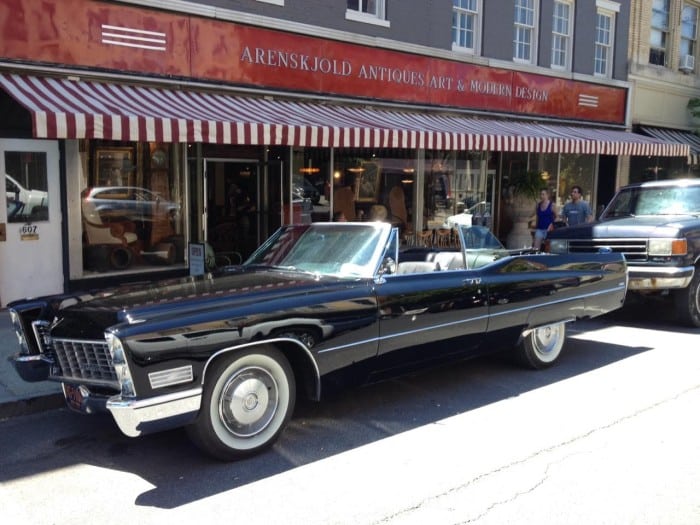 Specialty: About 10 years ago we started buying modern pieces because at the time it was so affordable. Now the store is almost entirely Danish modern. Kim has a very good eye and he’s also very good at identifying trends before they even occur. Not all of our stuff is a designer name, but of course we have Hans Wegner, Poul Kjaerholm and other famous names. We’re now buying other things by designers who we think are up-and-coming, like Flemming Lassen. We’ve had a few of his armchairs in the past.

Favorite Listing: I would say the pair of leather chairs by Fritz Henningsen. Those are dynamite-looking chairs. They’re Danish modern but probably from the 1940s. The form is fantastic — very exaggerated and very comfortable. And I love the old patinated leather, of course.

While you’re here: I think the most fabulous lunch place is Le Gamin Country. There used to be one in Soho that doesn’t exist anymore, but that’s why this one was called “country.” They have excellent French food and great coffee.