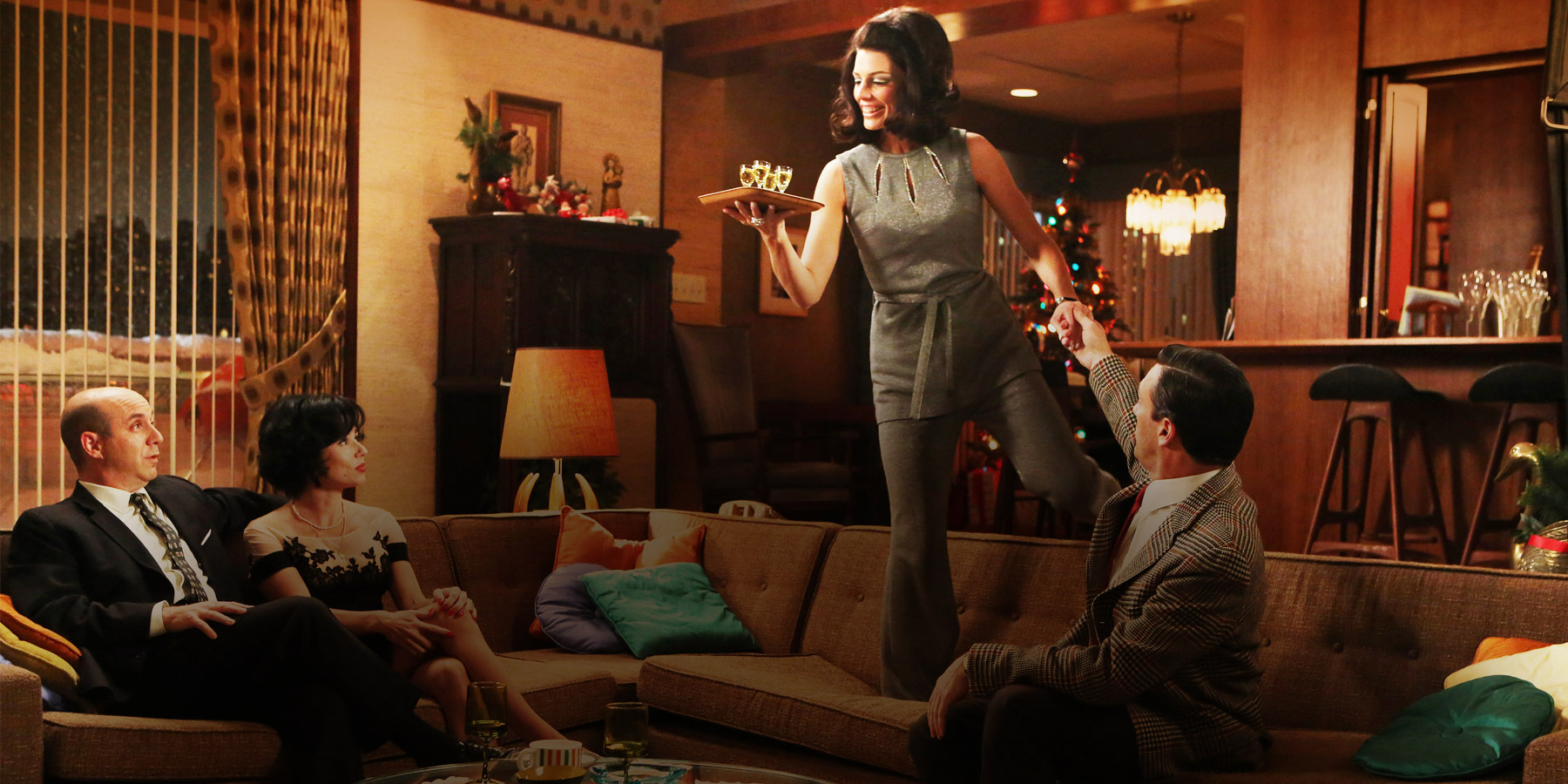 Arguably no other television show in history has elicited so much fervent admiration for — and close examination of — its look than the paean to mid-century design that is Mad Men. Here, we go behind the scenes with its set decorator, Claudette Didul, the woman responsible for sourcing the furnishings and props that turn a creative vision into screen-ready reality. 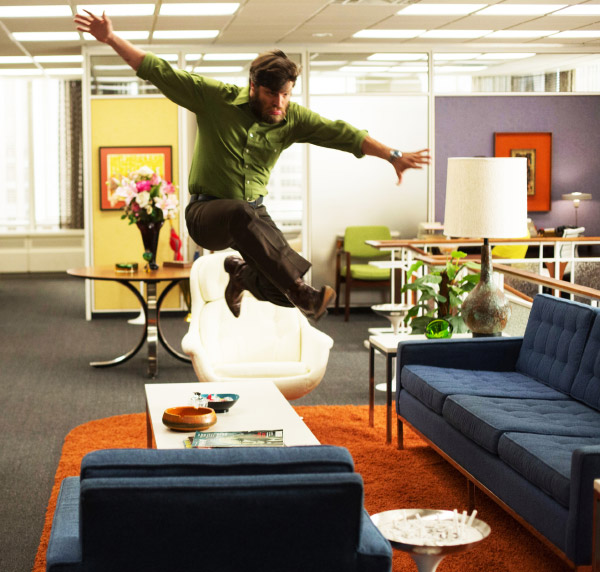 Admired — some might even say worshipped — for its period accuracy, the Emmy-winning drama Mad Men is now so closely associated with a certain stylish 1960s New York that it serves as an unofficial record of how the era looked. Series creator Matthew Weiner is known as a stickler for authenticity, paying minute attention to every element, whether it’s the glasses from which characters sip cocktails or the ashtrays they use to mash out their Lucky Strikes. As for where all this detail comes from, that’s the job of set decorator Claudette Didul, who selects the furnishings and props — many found on 1stdibs — that fill the series’ dozens of sets, from Roger Sterling’s mod office to Megan and Don Draper’s swank Upper East Side pad. Growing up with parents who met at a Lexington Avenue advertising agency, and having worked on the set of such period films as Catch Me If You Can, Didul feels a special affinity for the Mad Men milieu. We spoke to her on the eve of the sixth season’s finale. 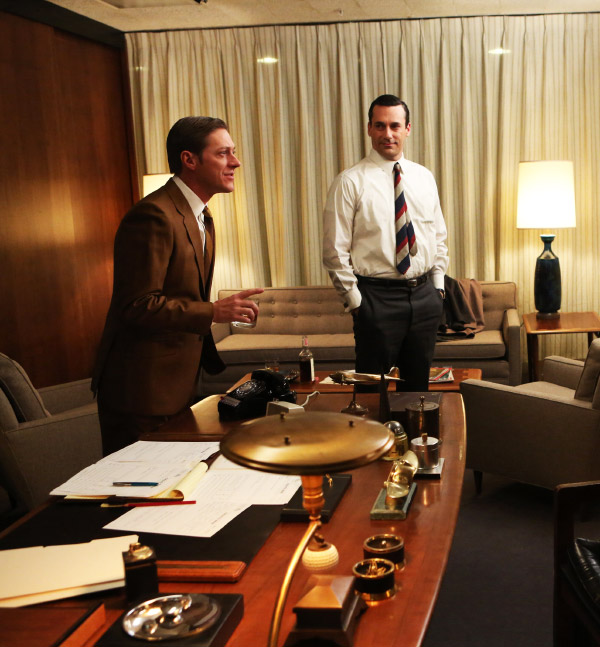 Though its look has evolved over the years, much of the show has consistently revolved around protagonist Don Draper (Jon Hamm), at right. Photo by Michael Yarish

You’re responsible for selecting the decor that is so essential to the identity of the show. Where do you find it all?

We hope that there are things around Los Angeles, where the show is filmed, but we don’t always find what we need. I do shop online and use 1stdibs quite a bit, for research and to buy things. This past season, for the new offices on the second floor, there’s a nice round table as you come up the stairs that we found on 1stdibs from a dealer in Florida. For the fourth season I bought some desk lamps from 1stdibs dealer Amsterdam Modern. Another dealer, JF Chen, has great stuff too.

So it’s not a problem to buy something online without first having seen it in person?

No, actually. We’ve been really fortunate for the most part. Things often look better when we get them!

How much time are you usually given to find everything you need for a set?

It depends; for permanent ones we have more time. This season we were doing the whole second-floor offices, and I had eight weeks of prep to find furniture, artwork and light fixtures. I had to figure out what kind of light fixture would hang over the staircase, then we had to duplicate it because the downstairs and upstairs offices are on different stages. But generally, for less permanent sets, we have around a week and a half to get the next episode ready while we’re working on the current episode. 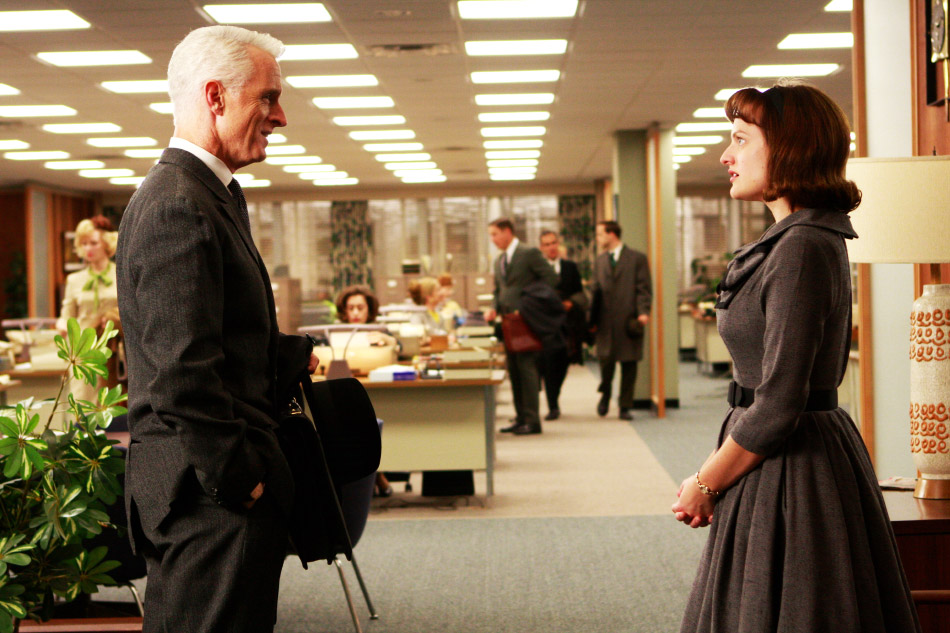 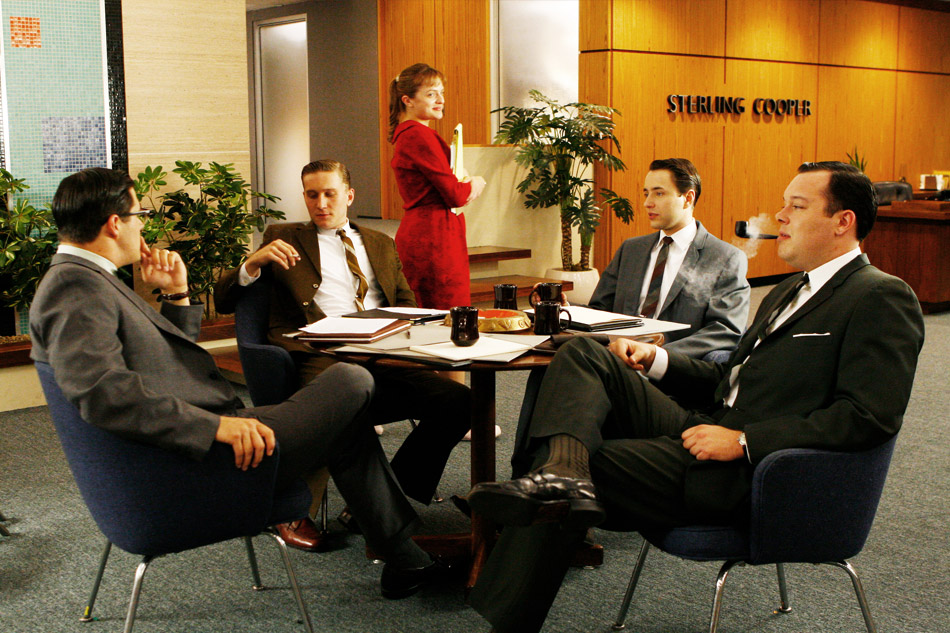 The show charts not only the shift in design trends during the 1960s, but also its changing gender politics, particularly through the character of Peggy. Photo by Carin Baer 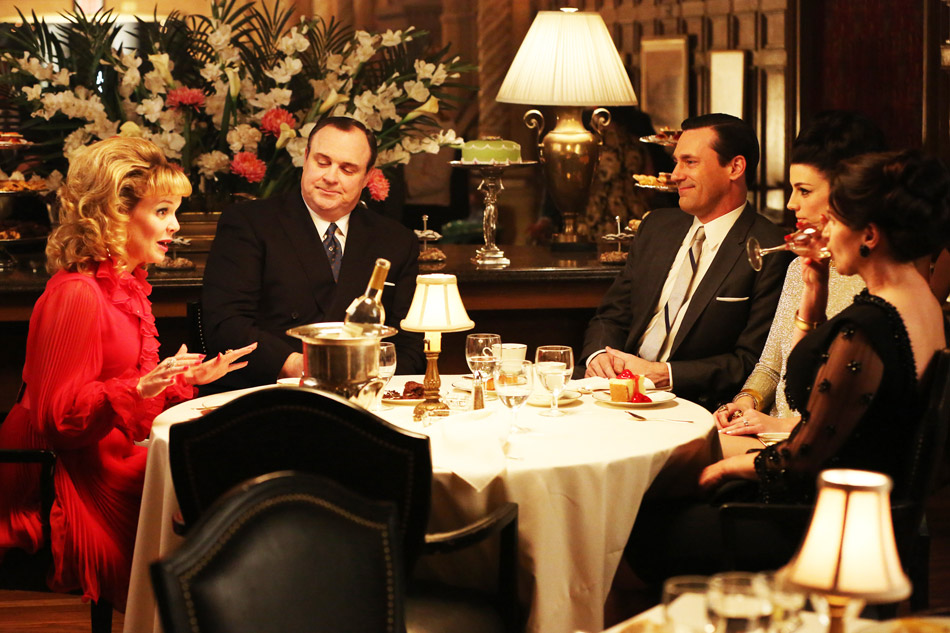 That’s not much time. Do you have loads of stuff in storage ready to go?

It sometimes seems like it, but furniture takes up a lot of room, and once you move it from storage to the set you feel like you don’t have enough. That’s a challenge because Matthew [Weiner] loves clutter. It’s one of his pet peeves to not have enough stuff in there. We put so much stuff in the office — books, papers, cups of pencils, drafting tools or art-supply items and so on — and it just disappears into the set!

Do you often have to build or make reproductions of furniture?

There is a bench in Don and Megan’s apartment with blue cushions and chrome legs that we had to build to fit that spot. And we built the Knoll-inspired furniture in there. We needed it in sizes that aren’t sold, and I wouldn’t have been able to afford the real deal. There are the dimensions to consider, but also the budget. 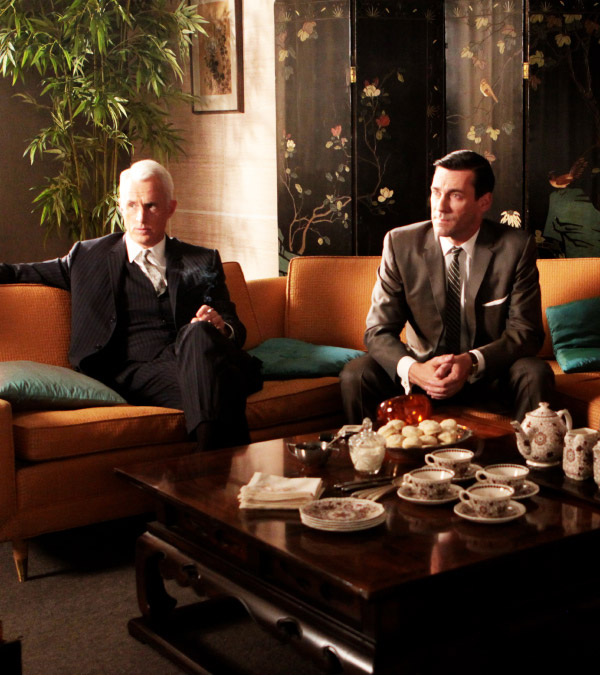 One of the show’s characters, Bert Cooper (Robert Morse), not shown here, has an affinity for Asian culture, which Didul reflects in his office. Photo by Carin Baer

There are so many different locations introduced each episode. There seems to be so much furniture and decor to supply. Do you buy most of the furnishings we see?

If there is something that’s reasonably priced or if something is more permanent — in at least four episodes, like Don and Megan’s apartment — it’s better for me to buy it. We do get things from prop houses, particularly for more temporary sets, like the restaurant at Bobby’s camp, or the 1930s rooming house in Don’s flashbacks.

Don and Megan’s glamorous apartment, with its sunken living room, built-in sofas, wood paneling, sea-grass walls and other mid-’60s details caused quite a stir among viewers when it was unveiled. What were some of your sources for that set?

There’s a great book from the mid-’60s by Betty Pepis. I wish they would reissue that. And Dan Bishop, the show’s production designer, turned me onto a New York Times design book from 1965. That’s a terrific source. And then in a local thrift store I actually found that the LA Times home section used to have a magazine, and I bought all that I could from 1964 to ’67. There are some great ads in it showing appliances and so on.

When creating the various offices for the show, Didul called upon her own memories of her father, an advertising executive like those depicted on the show. Photo by Michael Yarish

And what about the office? I know that you grew up in the 1960s and ’70s, visiting the midtown Manhattan office of your father, who worked in advertising. What else has inspired that super-mod office design?

There are some architectural books from the late 1950s showing commercial offices, and a lot of them have Eames and Knoll furniture. It was mass-produced and very commercial furniture for the time. You look at these insurance offices out in the middle of Kansas, and they  all look beautiful because they had that really great plywood coffee table with the Eames plywood chairs and Shell chairs around. And even though the photos are black and white, they look so pretty.

There are also quite a few historical-looking interiors, like some of the old New York restaurants, or Betty and Henry’s home. Are you comfortable dealing with more historical material as well?

Yes, actually. I really like the 1930s. It can look elegant, but you also have that “down” feeling. And the colors are so interesting — very warm, like a Reginald Marsh painting.

Betty and Henry’s Victorian mansion in Westchester seems very authentic. Do you recall homes like that from growing up there?

There were some Victorian homes in our area. I pictured theirs being one of the grand houses along the Hudson River. People still had Victorian furniture in the 1960s and ’70s — it was kind of having a revival then, I guess.

Yes. Looking at old House Beautiful magazines, I saw that 1967 had a lot of Lucite, blow-up plastic pillows and chrome, so I introduced a Milo Baughman chair in Roger’s new office. The Knoll look is giving way to chrome,  glass and Lucite — more flash.

Furniture is not the only source of eye-candy on Mad Men. Photo by Frank Ockenfels

Do you think Mad Men can be credited for the growing popularity of mid-century modern design?

Some of it is due to the show itself, but it’s really just a nice look, and a lot of the mid-century furniture is really well made and can work with any style. You can just pop it into any space and any color.

To many people, you have the ultimate dream job. What’s the best part about it?

When the set is dressed and you can breathe a little bit. Like, “Oh, finally we did it!” But sometimes there’s that, “Oh my God, we found this piece!” The hunt excites me. 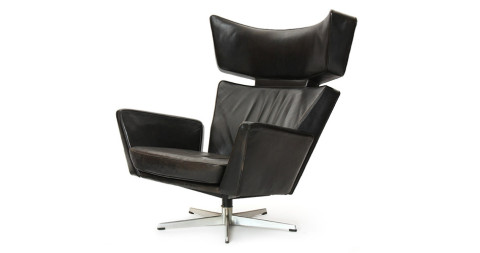 “This Ox chair is a lot like Don Draper. It is quiet, a little mysterious, but it commands attention. Equal parts executive and eccentric, the chair would be perfect fireside in Don and Megan’s Park Avenue pad.” —Kit Cowan, Wyeth, New York 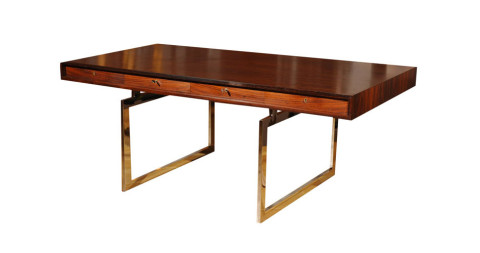 “In the Mad Men era, female furniture designers had not only broken through the ‘glass ceiling,’ but were already at the top of the industry. Think of Florence Knoll, Nanna Ditzel and Bodil Kjaer, who designed this desk. And even if he’s sometimes a scoundrel, Don Draper deserves a great desk!” —Charles Almond, Almond Hartzog, San Francisco 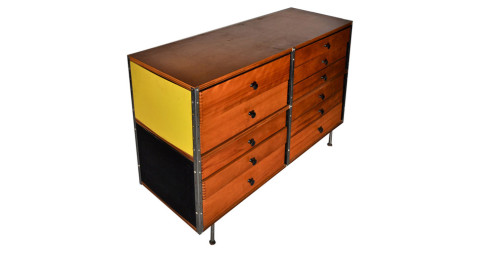 “This would be a fun and playful piece for Sally Draper’s room. It’s got a great color combination to spruce up a kid’s room. And the style and colors are timeless — it would work well into her teenage years.” —Bianca Chen, JF Chen, Los Angeles 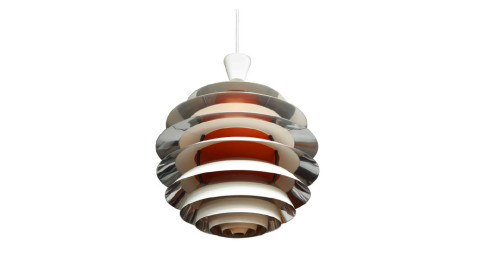 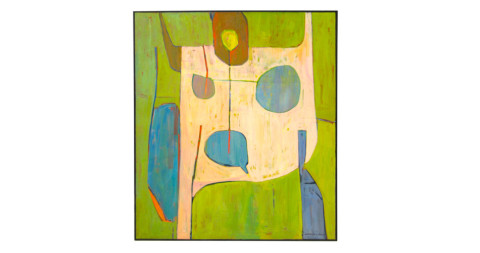 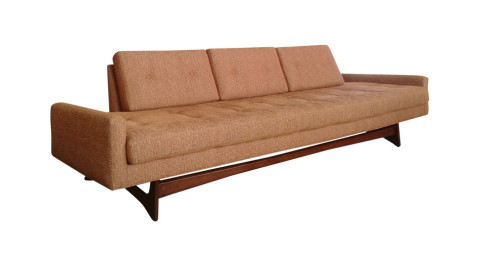 “The reason we picked this sofa is that it’s from the 1950s and like everything on the show it has great lines. It came from a Palm Springs house.” —James Claude, A La MOD, Palm Springs, California 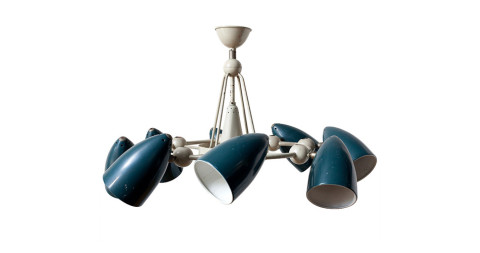 “I’d put this cool chandelier over the table in the creative room of the agency where Peggy, Stan and Ginsberg do their magic.” —Lynn Chick, Amsterdam Modern, Van Nuys, California 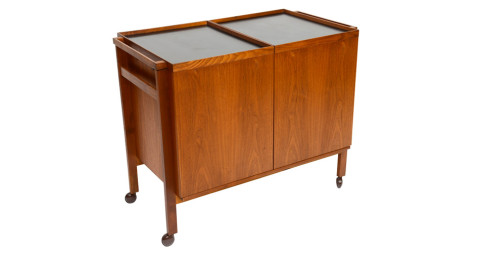