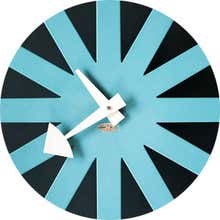 As the pieces on 1stDibs demonstrate, the mid-century modern American period saw one of the most delightful and dramatic flowerings of creativity in design history.

Sofa by Jens Risom
By Jens Risom
Located in Sagaponack, NY
A three (3) seat sofa on a teak frame base retaining the original yellow upholstery.
Category

George Nelson Prototype Domino Clock
By George Nelson
Located in Chicago, IL
Nelson office, designed by Irving Harper for Howard Miller. This is the only clock and was never produced. Purchased from Howard Miller Executive.
Category

Pair of Brass and Vitrolite Side Tables after Harvey Probber
By Paul McCobb
Located in New York, NY
A pair of side tables in a square form with white inset Vitrolite glass tops on polished solid brass frames. After Harvey Probber. American, circa 1950.
Category

Pair of Brass and Vitrolite Side Tables after Harvey Probber

Pair of Cane Back Armchairs in the Style of Robsjohn--Gibbings
Located in Atlanta, GA
A beautiful and warm pair of cane back armchairs. While the chairs are unmarked, they are reminiscent of Robsjohn - Gibbings for Widdicomb production of the 1950's. Excellent Restore...
Category

Pair of Cane Back Armchairs in the Style of Robsjohn--Gibbings

A Walnut Sideboard by Edward Wormley
By Dunbar Furniture, Edward Wormley
Located in Sagaponack, NY
A walnut server with central compartment having a removable glass-bottom serving tray & one adjustable shelf, flanked by two banks of four drawers over one long drawer all with brass...
Category

A Walnut Sideboard by Edward Wormley

Club Chair with Bronze Base & Cutouts
Located in Palm Desert, CA
A unique club chair with bronze base and inserts in dark charcoal nubuck leather. Dated 1938 and labeled "Mandel Bros Chicago" it is rumored to have been used on a luxury railcar.
Category

Dining Set for Six by Edward Wormley for Dunbar

a Harry Bertoia Monotype
By Harry Bertoia
Located in Toronto, Ontario
A nice example of a Harry Bertoia monotype . Gently draping rods from a central point and upright . A one of a kind piece of art from the American Master Sculptor. Numbered 3503B ...
Category

1930's CHARACTER,CULTURE and CITIZENSHIP POSTERS
Located in Hudson, NY
A Large Collection of Educational Posters Created in the 1930's for Use in Classrooms.<br /> Designed by Various Instructors of Art in the Midwest, these wonderfully Graphic Images...
Category

Swivel Chair by Jens Risom
By Jens Risom
Located in Sagaponack, NY
An upholstered swiveling lounge chair in leather with a tilt mechanism on a metal disc base.
Category

Headboard by Edward Wormley for Dunbar

Maxwell Royal Settee
Located in Palm Springs, CA
A tall and sculptural settee with tapered wood arms and back, often attributed to Edward Wormley for Dunbar. Designed by Maxwell Royal in the 1950's. Highly stylized, it was influenc...
Category