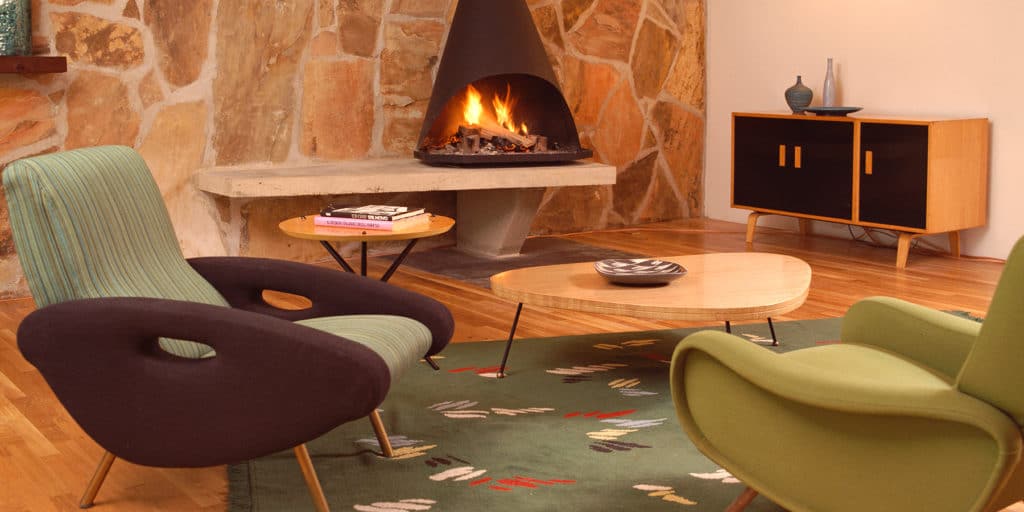 Before this era’s furniture gained recognition as timeless and iconic, it was considered just a trend that had fallen out of fashion. 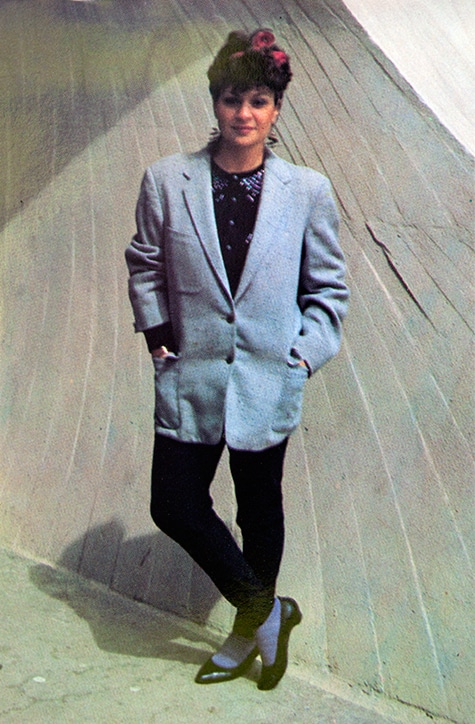 The chair looked alien, low and squat, with a molded seat and back resembling large wooden potato chips. Offered as part of an impromptu sale on a lower Manhattan sidewalk, it sat surrounded by the sorts of things people like me, a student and $4-an-hour office worker, were collecting at the time: Fiestaware, Coca-Cola signs, peanut-shaped coffee tables with blue glass tops. I bypassed all that and walked straight to the otherworldly little chair. I didn’t even think. I picked it up and paid the hippie seller 15 bucks, which seemed a grand bargain even in early-’70s dollars.

Back in my MacDougal Street apartment, I turned it over and studied the paper label: “Evans Products Company, Molded Plywood Division, Herman Miller Furniture Company Sole Distributor. Designed by Charles Eames.” I didn’t know who Charles Eames was, although I soon learned he was arguably the great genius of American postwar furniture design and the chair an outgrowth of early-1940s experiments in plywood molding conducted by Eames and his wife, Ray, in their California garage. I didn’t know it was one of the seminal pieces of the era, called “the chair of the century” by Time magazine and “a completely integrated expression of form, function and manufacture” by George Nelson, an equally important designer and member of the postwar design intelligentsia. I just thought it was a cool-looking chair.

Dubbed the LCW (Lounge Chair Wood), it was first produced in 1946, although I had never seen anything like it growing up on suburban Long Island. Such chairs were found only in the most sophisticated homes or else, in versions made of fiberglass, leather and steel, in forward-thinking corporate offices. Today, original Eames LCWs are fixtures on the vintage market, with about a score of similar ones currently on 1stDibs. 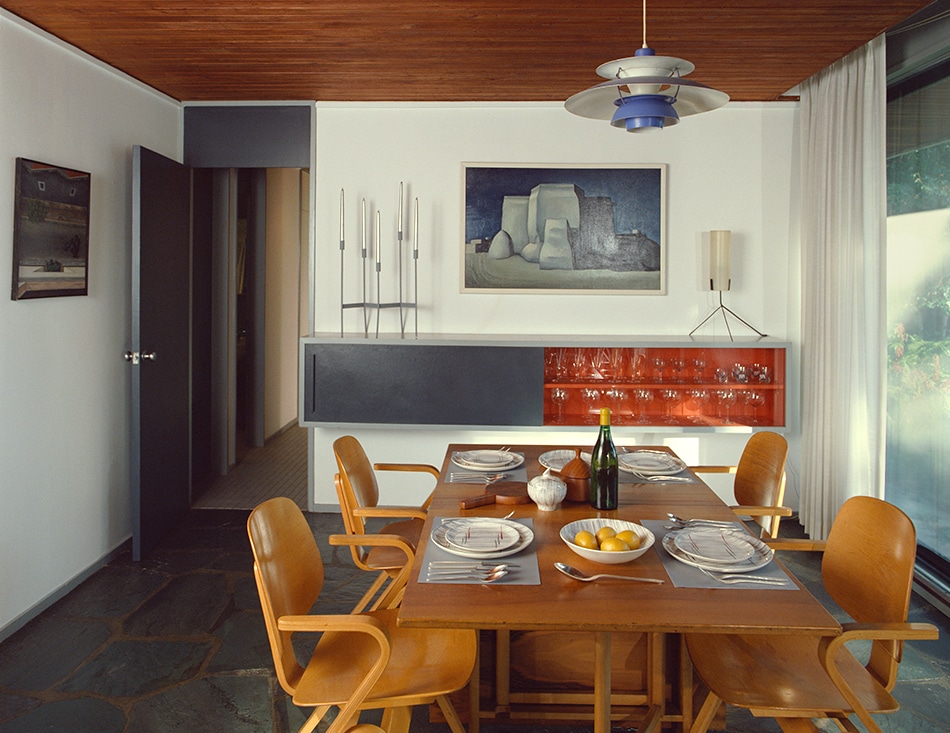 In this 1953 Marcel Breuer–designed home in Croton-on-Hudson, New York, a Poul Henningsen PH-5 lamp hangs over the 1940s Bruno Mathsson gateleg dining table, which is surrounded by blonde wood chairs by Joe Atkinson for Thonet. Breuer designed the wall-mounted cabinet.

At the time, though, I knew of only one store selling that kind of oddity:  Fifty/50, a hole-in-the-wall on nearby Thompson Street owned by Mark McDonald, still an influential modern dealer, and the late Mark Isaacson. It would be a while before others embraced the distinctive look of 1950s furniture — its frank construction, free-form shapes and inventive use of industrial materials. But gradually, over the next few years, I began to notice more retail stores springing up, flea-market dealers pulling ’50s furniture out of homes and offices and pieces like Isamu Noguchi’s sculptural glass-topped coffee table showing up at high-end antiques shows with increasingly hefty price tags.

About a decade after my pivotal sidewalk purchase, living in Brooklyn and writing freelance for magazines, I proposed a story on 1950s furniture to Metropolitan Home. The article appeared in April 1983, highlighting Eero Saarinen’s fluid pedestal table and chairs and Harry Bertoia’s spread-eagled 1952 wire chair for Knoll, Danish designer Arne Jacobsen’s playful 1958 Egg chair and the luxurious 1956 leather-and-rosewood Eames lounge chair for Herman Miller, among other pieces. Soon afterward, Harriet Bell, a prescient editor at Harmony Books (a division of Crown Publishing later acquired by Random House), called asking, “How would you like to write a book about fifties furniture?” 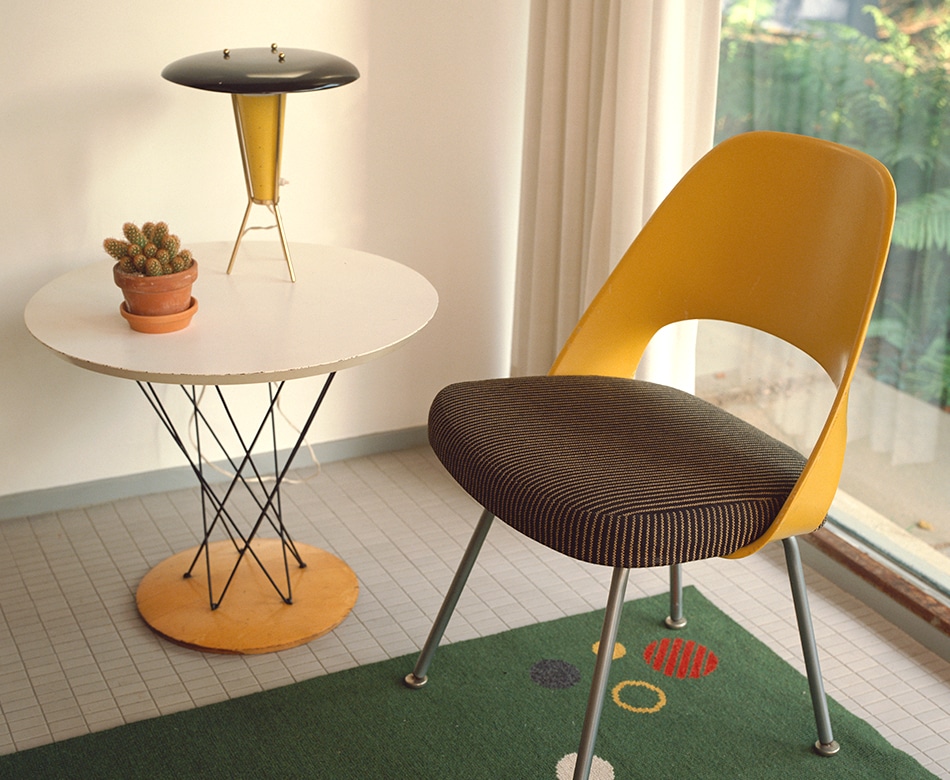 This Eero Saarinen chair is part of a 1948 collection for Knoll; the 1954 Isamu Noguchi Cyclone table was also for Knoll. The rug and lamp are French designs. 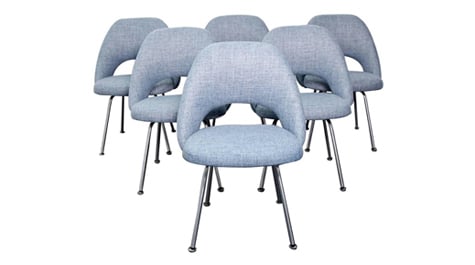 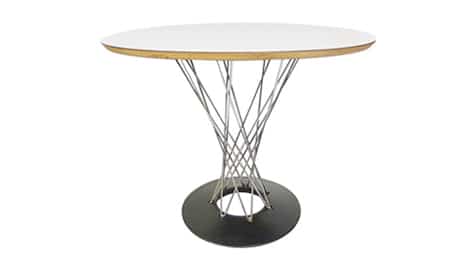 My advance was enough to buy an AT&T 6300 word processor, a monster of a thing, which replaced my IBM Selectric II with correcting ribbon, and the book took shape over the next nine months. Well-known photographer Tim Street-Porter shot a few interiors, including longtime dealer Barry Friedman’s impeccably appointed 1953 Marcel Breuer house in Croton-on-Hudson, but most of the book was composed of archival material unearthed during days spent in the reading room of the New York Public Library and the libraries of the Cooper Hewitt, MoMA and other museums and combing the files of furniture manufacturers and generous designers like Vladimir Kagan and Wendell Lovett. The Herman Miller company, especially, gave me carte blanche. I flew out to Zeeland, Michigan, and spent three days taking notes and winnowing photos, eventually leaving with 75 product shots and vintage ads that made up a third of the book. More photos came from Fritz Hansen, in Denmark, and from Italian makers like Cassina and Arflex. I had a phone conversation with George Nelson and met Ray Eames for tea at Manhattan’s now-gone Stanhope Hotel, where she minimized her role, insisting she was just a helpmate to her husband. 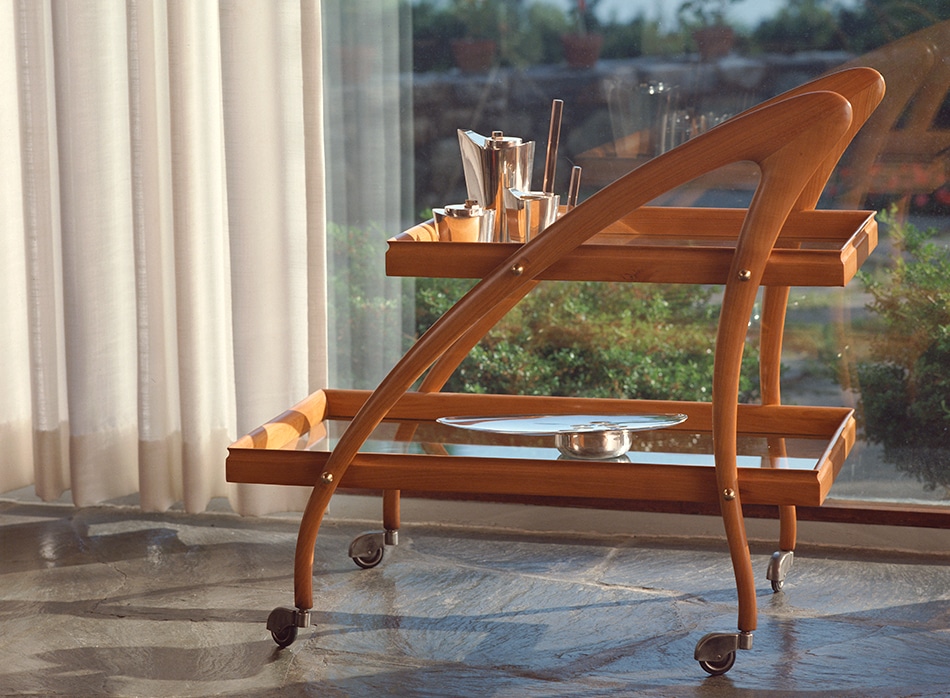 This 1950s Italian tea cart features an airplane-wing silhouette with a thick-and-thin modeling of wood. 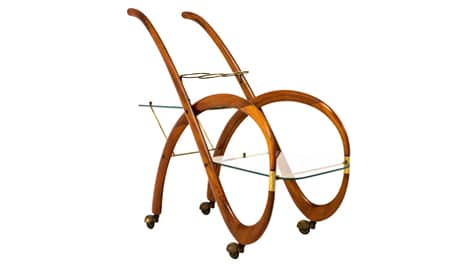 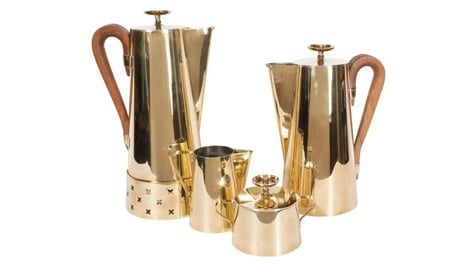 When the book was nearly done and it was time to name it, I presented Harriet Bell with a long list of possible titles. She zeroed in on Mid-Century Modern (with the subhead Furniture of the 1950s). Did we invent the term? Who knows? Recently, a snarky article in a periodic journal published by the architecture firm SOM pointed out that “pre-Greenberg uses show up, at a rate of one or two per decade,” citing the name of a 1953 furniture line by J. Stuart Clingman for Widdicomb. Be that as it may, we certainly popularized it.

Without entirely knowing what I was doing, I managed to cover the bases in a way that made Mid-Century Modern, which came out in the fall of 1984, the only book in its niche for a very long while, reprinted several times and eventually staying in print for about 25 years. The reviews were enthusiastic. Mid-Century Modern “manages to convey the verve, imagination and occasional pure zaniness of the period,” wrote the New York Times. And the Chicago Sun-Times said: “Greenberg set out to write a book about modern furniture, but what she wrote was a book about modern history.” Soon the term mid-century modern was being bandied about in print and in ordinary conversation. Within a few years, mid-century modern as a style was widely recognized. 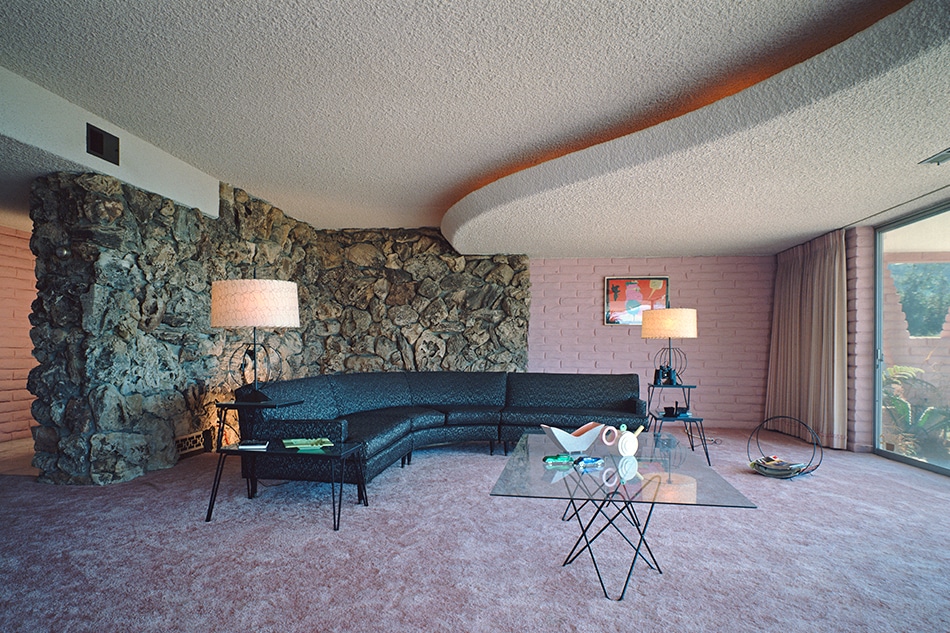 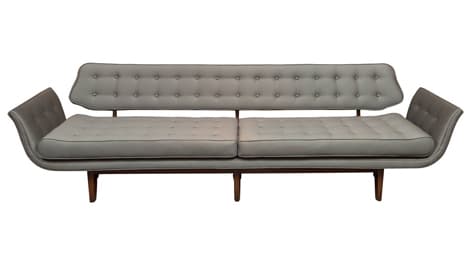 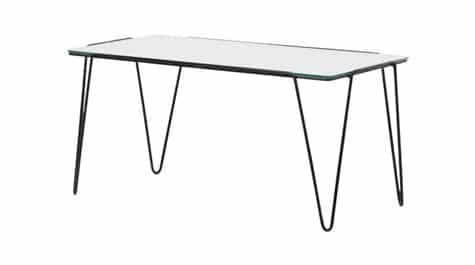 By 1994, the executives at Herman Miller had realized that the Eames, Nelson and Noguchi designs they’d discontinued were in fact classics, and they reissued some of them. At first, this was a challenge for the vintage market, although many customers cherished the cachet only an original example offered. It also had the effect of making gallery owners resourceful, leading them to ferret out more-obscure and far-flung 20th-century design figures, like Paul Laszlo, Karl Springer, William Haines, Brazil’s Joaquim Tenreiro and many more. In that same decade, major auction houses began mounting specialty sales of 20th-century design, full-on modernism fairs took place at venues worldwide, companies like Design Within Reach were launched on the strength of the new interest in mid-20th-century design, and young artisans created new works inspired by the tenets of the mid-century.

The advent of 1stDibs at the cusp of the 21st century was a key factor in making the style more accessible, greatly expanding the breadth and depth of available material. Today, mid-century modern is by far the largest category of furnishings on the site, with nearly 125,000 items on offer at recent count. 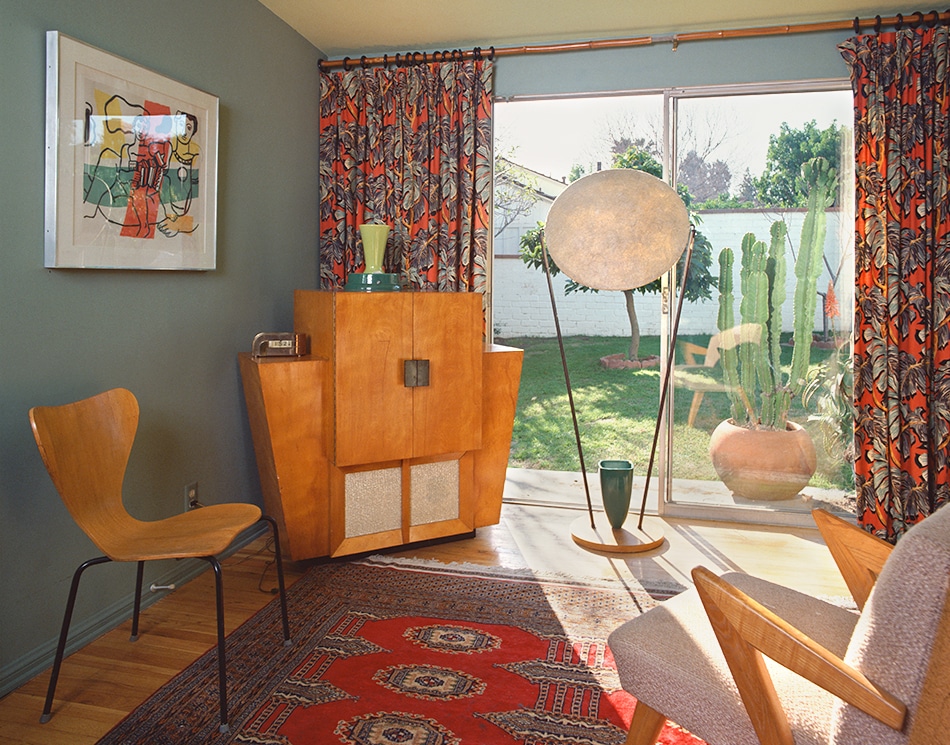 The blond wood cabinet and angled armchair in this 1947 Los Angeles home are unsigned pieces. The floor lamp has a fiberglass top the reflects light that emanates from its base. 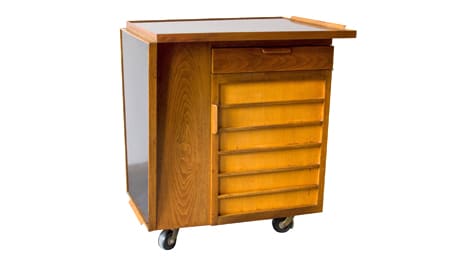 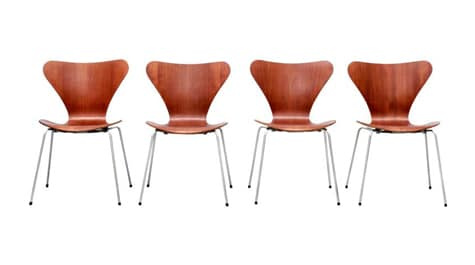 The practice of interior design, meanwhile, has become quite eclectic, with a dynamic mix of antiques, vintage modern and contemporary furnishings more the rule than the exception, and nearly all top designers making frequent use of mid-century modern pieces in their decorative schemes.

From where I sit, the popularity of the style has been a juggernaut since the book’s publication, and it shows no signs of slowing. Why should it? The quality of the best material hasn’t changed. I stand by my assessment that the period from the end of World War II to 1960 — from V-J Day to JFK — was the heyday of innovative furniture design in America and that Herman Miller and Knoll, which stabled the leading lights of postwar design, set a standard that has never been bested.

Thirty-three years after my book’s publication and seven decades after their introduction, these icons of mid-century modernism still look fresh. I hold the design of the era in as high esteem as ever, admire the pliable imaginings of its practitioners, its ergonomic wisdom, its prototypical curves. The relaxed parabola that describes the trajectory of a rocket may have signified the coming of the space age in a then particularly timely way, but it is also a mathematical principle, like the golden ratio of classical Greek architecture, eternally pleasing to the eye. 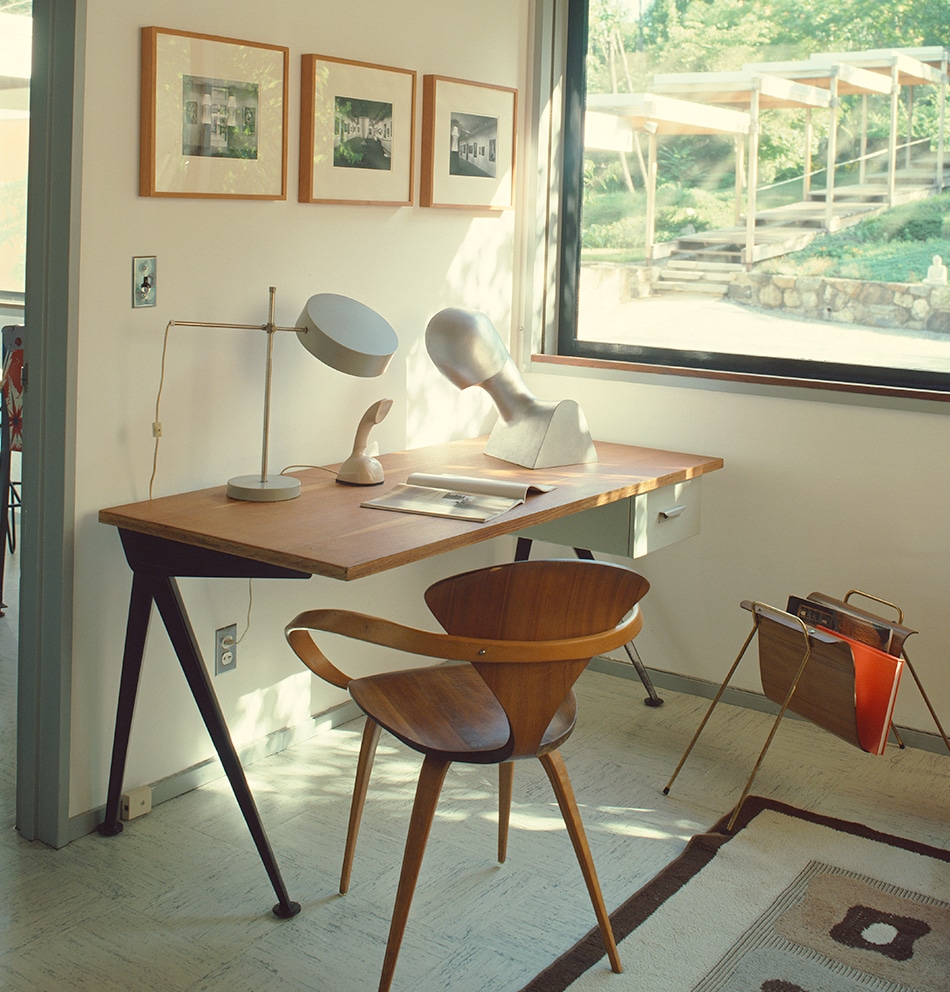 Here, a 1952 Jean Prouvé desk is paired with a 1956 Norman Cherner for Plycraft chair. 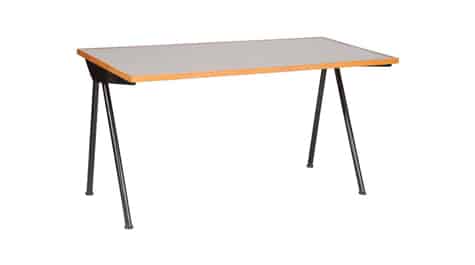 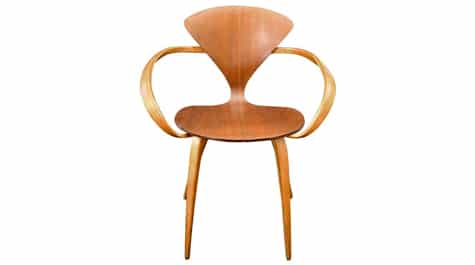 I’m as tired of hearing that mid-century modern is having a “resurgence” as I am of hearing that Brooklyn is “really hot now.” Mid-century modern is not “resurging.” It’s an abiding style whose best designs are immortal. “When something attains that level of design purity and sculptural assuredness, it is bound to be rediscovered again and again by each new generation,” I wrote in my intro to the book’s 1995 edition, and it’s still happening.

Like Dylan, Springsteen and the Stones, who in their youth never dreamed they’d still be rock ’n’ roll superstars half a century later, the exuberant style of the mid-century had more staying power than anyone ever imagined, and it deserves every bit of its enduring renown.