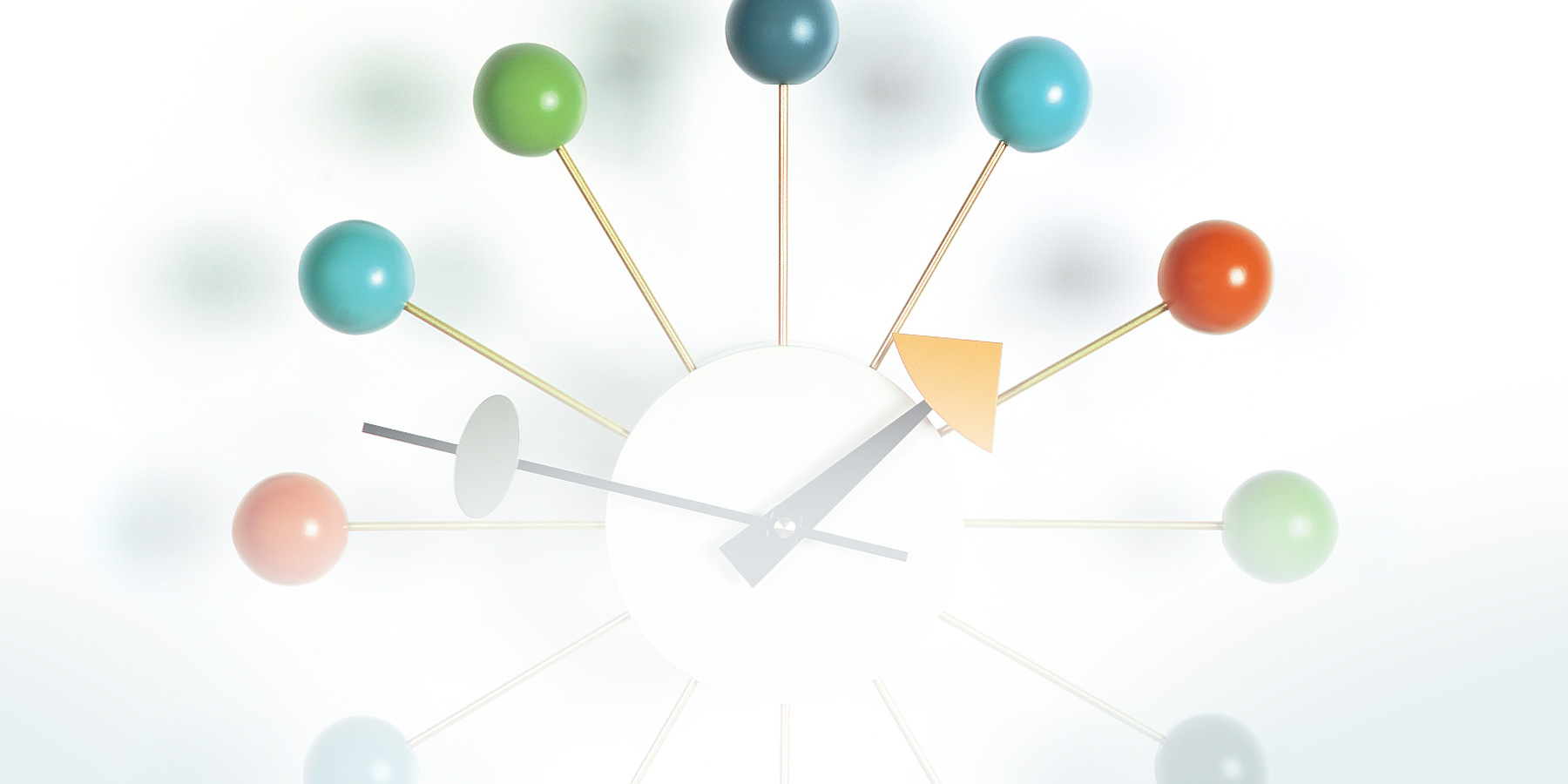 George Nelson, the man behind such iconic mid-century designs as the Marshmallow couch and the Ball clock, was also a keen critic, willing collaborator and all-around visionary with a probing, inquisitive mind. 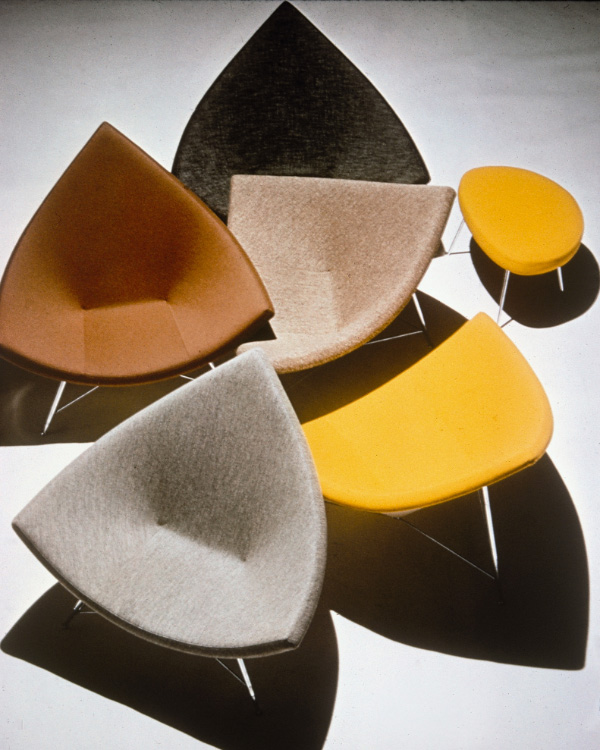 January 23, 2013George Nelson named his Coconut chair of 1955 after its shell-like shape. With its three legs and spikey geometry, it hints at a post-war science-fiction aesthetic. Top: Nelson designed the Ball clock for the Herman Miller Clock Company in 1949; later he gave the credit to his associate, Irving Harper. All photos courtesy of Vitra Design Museum Archive unless otherwise noted

George Nelson is much more than just the designer of a handful of design classics everyone knows,” says Jochen Eisenbrand, chief curator at the Vitra Design Museum, in Weil am Rhein, Germany, which has owned the Nelson estate since the designer’s second wife, Jacqueline, left it to the institution after his death in 1986. “His interest was in the broader question about how we live.”

The Vitra museum’s library and document archive are open to researchers upon request, and now an internationally touring exhibition organized by Eisenbrand has put much of the Nelson record on public display.  “George Nelson: Architect, Writer, Designer, Teacher” closes shortly at the Yale School of Architecture Gallery, in New Haven, Connecticut, after an ambitious international tour.

Even though many people are familiar with Nelson’s iconic creations from the 1940s and ’50s — the Ball clock, the Coconut chair, the Marshmallow sofa the Bubble lamp — they most likely don’t know that Nelson was a Renaissance man. As the show at Yale makes clear, he was not just a visionary modernist but also a serious writer, a proto-feminist and a thinker, often more interested in ideas than in producing objects, and a great boss who was happiest when he was collaborating with such talented friends as Buckminster Fuller, Alexander Girard and Charles and Ray Eames.

Nelson came to design through an unorthodox path: writing. After earning two bachelor’s degrees at Yale (a B.A. in 1928 and a B.F.A. in architecture in 1931) and winning a Prix de Rome, he spent two years at the American Academy in Rome. During his fellowship, he crisscrossed Europe interviewing the leading architects of the day, including Mies van der Rohe, Le Corbusier, Walter Gropius and Gio Ponti, for Pencil Points, an architecture journal that was later renamed Progressive Architecture.

NELSON WAS NOT JUST A VISIONARY MODERNIST BUT ALSO A SERIOUS WRITER, A PROTO-FEMINIST, A THINKER, OFTEN MORE INTERESTED IN IDEAS THAN IN PRODUCING OBJECTS, AND A GREAT BOSS WHO WAS HAPPIEST WHEN HE WAS COLLABORATING WITH TALENTED FRIENDS. 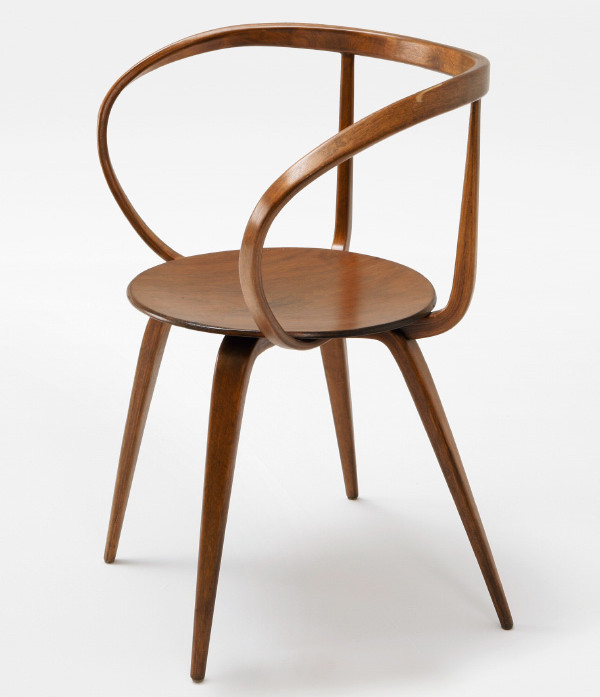 The Pretzel chair of 1952, made of molded lightweight plywood, recalled the much earlier Thonet bentwood cafe chairs. It proved difficult for Herman Miller to produce, resulting in a high price and limited sales.

He was a confident, articulate critic. “The Tugendhat House is Mies’s masterpiece, justly world famous, perhaps the finest modern house that has been built,” he once wrote. “Mies’s fondness for space, for simplicity, for rich materials all find expression here.” On Corbusier, he wrote: “He is absolutely incapable of compromise solutions.”

He did graphic and product design projects for Fortune 500 companies, participated in the International Aspen Design Conference and various international exhibitions, even designing the Chrysler pavilion at the 1964 World’s Fair in New York. In 1959 he was in charge of design for the American National Exhibition in Moscow, which included a Buckminster Fuller dome and a model American kitchen that became the backdrop for the famous Krushchev-Nixon “Kitchen Debates.”

He also created retail spaces in New York, including La Potagerie, the Rosenthal Studio-Haus on Fifth Avenue and the original Barneys. “He was a curator of life,” says current Yale School of Architecture dean Robert A.M. Stern. “He took command of the full range of possibilities of what architecture could be.”

Iconic George Nelson Through The Years