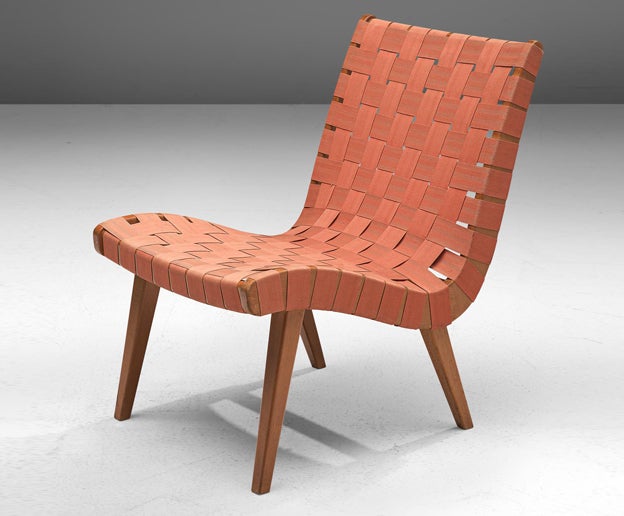 Debuting in 1943, the Risom lounge chair was among the first pieces of furniture commissioned and produced by legendary manufacturer Knoll. It was the work of Jens Risom (1916–2016), who had only just moved from his native Denmark to the United States in 1939.

Risom was by then a graduate of business school and had studied under Danish architect and designer Kaare Klint at Copenhagen's School of Industrial Arts and Design (Hans Wegner, whose many iconic creations include the Wishbone chair, was among his classmates). In New York City, Risom found work as an interior designer before embarking on a freelance career as a furniture maker and textile designer when he met Hans Knoll, who was mere months into his venture and needed inventory. In the first Knoll catalogue, 15 of the 25 pieces listed were Risom designs, and the Risom lounge chair would follow a year later.

Owing to the rationing of materials during World War II, Risom turned to surplus parachute straps for use in the construction of his chair, binding the woven straps to a curving birchwood frame. The design was immediately popular for office interiors and is recognized as pivotal to the introduction of understated Danish modernism to the States.

Today, Knoll continues to manufacture the simple but strong Risom lounge chair, and it is in the permanent collection of the Museum of Modern Art in New York.

to
Item Location
9
6
12
8
5
3
2
10 Jens Risom Side Chairs for Knoll
By Knoll, Jens Risom
Located in Los Angeles, CA
A Knoll Studio classic, Jens Risom's designs were the first pieces manufactured by Knoll. Due to war-time restrictions on materials, this style chair was originally constructed of si...
Category

10 Jens Risom Side Chairs for Knoll

U431 Armless Chair in American Walnut by Jens Risom
By Jens Risom, BENCHMARK
Located in London, GB
The U431 armless chair was first introduced in 1955 by Jens Risom Inc. Designed by the legendary Danish-born American designer, it is a timeless piece that works well in both residen...
Category

U431 Armless Chair in American Walnut by Jens Risom

Pair of Jens Risom Walnut "Floating" Lounge Chairs in Olive Velvet
By Jens Risom
Located in Brooklyn, NY
These exceptional Jens Risom lounge chairs are rare, early examples and are supported by walnut bases. They are relatively small in scale, though the seat was designed to be wide and...
Category

Pair of Jens Risom Walnut Lounge Chairs
By Jens Risom
Located in Pasadena, TX
Jens Risom emigrated from Europe to the U.S. when he was just 23 years of age. Like other Scandinavian designers such as Josef Frank and Kaare Klint, Risom continued to honor traditi...
Category

Pair of Jens Risom Walnut Lounge Chairs
By Jens Risom
Located in Pasadena, TX
Jens Risom Jens Risom emigrated from Europe to the U.S. when he was just 23 years of age. Like other Scandinavian designers such as Josef Frank and Kaare Klint, Risom continued to h...
Category