Reginald Marsh was born in Paris, France in 1898. His family returned to the U.S. in 1900, settling in New Jersey. The Marsh family moved to New Rochelle, New York in 1914, where Reginald attended the Riverview Military Academy until 1915. Marsh spent his senior year at the Lawrenceville School where he drew for the school's annual. Marsh then attended Yale Art School in 1916-20 where he became the star illustrator for The Yale Record and, later, its art editor. In his newspaper work Marsh exhibited a graphic skill and a gift for pictorial humor.

On graduating from Yale in 1920, Marsh moved to New York City where he supported himself as a freelance illustrator for newspapers and magazines, such as Vanity Fair and Harper's Bazaar. In 1922, Marsh became a staff artist for The Daily News, first drawing city life and then a column of vaudeville illustrations. When The New Yorker began in 1925, Marsh became a staff member, contributing through 1931. These illustration jobs provided Marsh with a good income and a great amount of free time, which allowed him to study painting at the Art Students League on and off through the Twenties with Kenneth Hayes Miller, John Sloan and George Luks. When Marsh began to paint in earnest in 1923, he joined the Whitney Studio Club, where he had one-man exhibitions in 1924 and 1928.

In the early 1920's Marsh made his first trip to Coney Island on a project for Vanity Fair. He was instantly drawn to the raucous environment of extremes, capturing the boardwalks, beaches and sideshows in his sketch books. Marsh often remained in New York for the summer to spend time at Coney Island. The rest of the year Marsh painted industrial subjects. He also enjoyed recording the physical and social life of a newly commercialized city, focusing on taxi-dance halls, burlesque, Coney Island, subways and the Bowery. In 1929 Marsh took a studio near Union Square in New York where he remained for most of his life, roaming the streets with his sketch book. The same sketches he worked up for his newspaper and magazine illustrations found their way into his paintings.

Marsh began teaching at the Art Students League in 1935 where he soon became one of the most popular teachers. In the spring of 1954, Marsh was chosen to receive the gold medal of the National Institute of Arts and Letters, an extremely high award in the American cultural world. 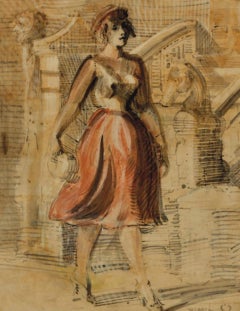 Reginald Marsh
Burlesque (on verso: Girls by the Waterfront), 1946

Water Sports - Nude Swimmers and Bathers at Coney Island
By Reginald Marsh
Located in Miami, FL
Historically, academic artists have always featured the central figures in their composition in a prominent light with the background figures being darker. In water sports, Reginal...
Category

TWO GIRLS IN SUBWAY
By Reginald Marsh
Located in Portland, ME
Marsh, Reginald. TWO GIRLS IN SUBWAY. S.58. Etching, 1928. Printed on cream-colored wove paper, with a watermark, upper left. One of only two proofs of the third state recorded ...
Category

Reginald Marsh
DISCUSSION or AT THE BASE OF UNION SQ. WASH STATUE. , 1934

Reginald Marsh
Summer at the Pier

BOWERY
By Reginald Marsh
Located in Portland, ME
Marsh, Reginald. BOWERY. S.54. Etching, 1928. A proof, one of only four, from the 5th State of 7. This proof is numbered "9" (there was one proof in each of the first three states,...
Category

Grand Tier and the Met
By Reginald Marsh
Located in Fairlawn, OH
Unsigned (as usual for the Whitney edition); Numbered in pencil lower left Blind stamp of the Whitney Museum (WM) lower right Edition: 114, regular edition of 100 (10/100), plus 1...
Category

1stDibs offers a wide variety of authentic Reginald Marsh art for sale. If you're looking for art to add a pop of color to a neutral corner of your living room or bedroom, you can find work that includes elements of red and other colors. You can also browse art by Reginald Marsh in etching, paint, watercolour and more by medium. Much of the original work by this artist or collective was created during the 20th Century and is mostly associated with the Modern style. Not every interior allows for large Reginald Marsh art, so small editions measuring 8 inches across are available. Customers interested in this artist might also find the work of Daniel Pollera, John Sloan and Martin Lewis.. On 1stDibs, the price for these items starts at US$900 and tops out at US$195,000, while the average work can sell for US$4,725.