Noël Daggett was born in Phoenix, Arizona in 1925. He became known for his neo-impressionist quadrille paintings likened to mosaic compositions or latticework. Later, he did more traditional style paintings of western genre and landscape. At an early age, he moved to California with his parents and won a scholarship to the California School of Fine Arts in San Francisco. During World War II, Noël was a Merchant Marine in the South Pacific and then took odd jobs in California, including the truck driver and fender repairman. He moved to Chicago and studied at the Chicago Art Institute and also studied privately with Leonard Rodowicz (1898–1981). In 1953, he was drafted into the Korean War and then was in military service in Germany doing illustration for Army bulletins. After discharge, Noël remained in Heidelberg for three years as a civilian illustrator. In 1958, he decided to become a professional illustrator and studied advertising in Los Angeles at the Art Center School. However, after one year, he switched to fine art, and after six semesters went to New York, where he won a scholarship to the New School and studied with Raphael Soyer (1899–1987). Noël also had a one-man show in Paris at the Galerie Ror Volmar in 1962. In New York in the 1960s, he had his work well received and earned honors including, the Emily Lowe Award and the Harold Stevenson Gold Medal of the American Veterans Society of Artists. Noël’s studio was on the top floor of a thirty-story building close to Times Square with a skylight and panoramic view of the city. His paintings come from a variety of sources from landscapes to figures, and he has also done mural decorations for the New York restaurant Henry IV. In his later years, he established a studio in Tucson, Arizona, from where he traveled extensively throughout the country. 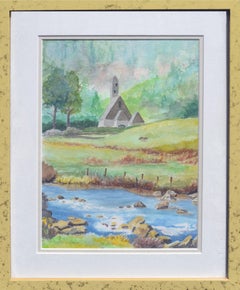 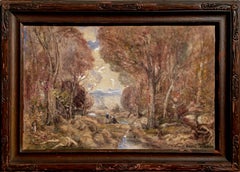 Reading on the Park Bench
Located in Soquel, CA
Category

Playing in the Park - Landscape
By James Nicholson
Located in Soquel, CA
Category

Joseph Yeager
Cacti on a Mexican Street - Landscape, circa 1940s-1950s

Pier and Sailboats in the Harbor - Seascape
By Gene Wynne
Located in Soquel, CA
Category

Gene Wynne
Pier and Sailboats in the Harbor - Seascape, 1974