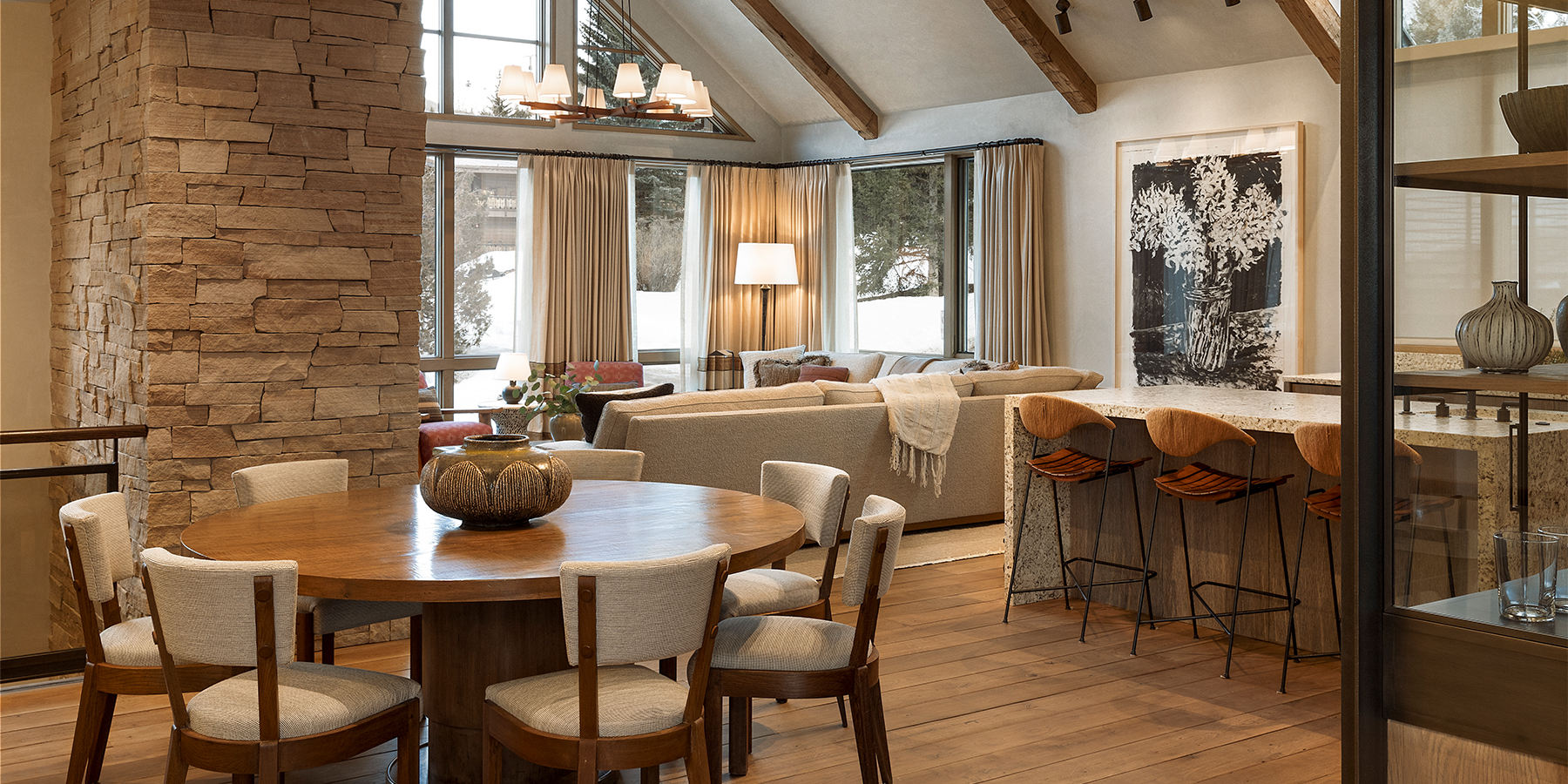 “My work tends to be a bit on the masculine side,” says Clive Lonstein, a Manhattan-based architectural and interior designer. Lonstein likes using rough stone, including travertine — with its distinctive perforations — and recycled wood, the more distressed the better. When lumber is new, he often has it wire brushed or sandblasted, he says, to add depth. And when he uses fabrics, he layers them and sometimes even shreds them, to produce collage-like collections of nubby textures. Observes Lonstein, “I’m not into shiny, smooth stuff.”

Lonstein grew up in South Africa, but in 1990, his family settled in Florida. He attended the University of Miami, where he wavered between careers in art and architecture. Eventually, he decided that “painting is too solitary. I like being part of a team.”

He went on to study architecture at Harvard’s Graduate School of Design. When he got his masters degree, in 1997, and moved to New York, he was offered positions by the interior designer Bill Sofield and by an architecture firm that does big buildings. On the advice of one of his professors, he chose Studio Sofield, where he was able to handle every aspect of a job. In 13 years at the firm, he designed hundreds of stores for such high-fashion brands as Gucci, Boucheron, Saint Laurent and Tom Ford. In 2010, he left to work at Tiffany as the vice president in charge of global store design. And in 2016, he founded his own firm in Chelsea.

Though he notably designed a small airport in Seattle, he mainly does residential work, which gives him a chance to think like both an architect and a designer. If you picture an apartment being refurbished and then furnished in discrete stages, you’re not picturing a Lonstein project, where all the steps are closely integrated. After all, you can’t just decide to cover a bathroom wall in stone; you have to know the thickness of the stone and factor that into the plans before construction can begin.

In the case of a recently completed townhouse in the center of Aspen, Lonstein’s client — a mother of four grown children — hired him soon after the new building broke ground. She had seen the exquisite detailing of a Manhattan apartment by Lonstein and gotten his number from its owner. The designer was able to work with the building’s developer to reconfigure the interiors right from the start. “We were given a shell, and we could do whatever we wanted,” he says. For her part, the client says that every year since she met Lonstein, she has gone to his office on her birthday — seriously! — “because working with him is the greatest gift. It’s important to know how lucky you are.”

One of Lonstein’s goals for the Aspen townhouse was to bring light and views to all four bedrooms; another was to make the four en suite bathrooms larger and more substantial than they would have been. The client, who uses the house with various friends and relatives, didn’t want the bedrooms to be hierarchical; there is no “main” bedroom, says Lonstein, explaining that all four are done to the same level of detail. And what a level: For one bedroom, he had drapes made from an ecru Cowtan & Tout fabric, with additional material from Claremont Furnishing Fabrics Co. for a gray-brown welt detail and Fisherman’s Fabrics for a mocha-colored contrast band.When it comes to getting everything just right, Lonstein says, “sometimes I can’t stop myself.”

Here, he takes us on a tour.

“I’m inspired by the landscape of Colorado,” Lonstein says, “particularly the sedimentary layers, where you see the split face of the rock.” That’s clear from the fireplace, the linchpin of the connected living room, dining room and kitchen. Lonstein had it made of local sandstone assembled into a “dry stack” (in which the mortar is well-hidden), almost as if it were a natural formation. It took quite a bit of back and forth with the mason to produce the arrangement he wanted — the corner pieces look like brackets, while the pieces in the middle flow down “like a river.” That means flowing from the ceiling, with its recycled wood beams, to the floor of reclaimed French oak.

A massive cast-glass coffee table with bronze feet, made by California artisan John Lewis, anchors the seating area. A round side table by Brooklyn ceramist Peter Lane stands between a pair of vintage club chairs.

Other pieces in the room, including the floor lamp in front of the windows, are from the 1970s. “I tend to gravitate to French nineteen-forties and -seventies pieces,” Lonstein says, describing those periods as having produced “simple forms in elevated materials.” The artwork, as seen in the image at top, is by William Kentridge.

Lonstein put as much thought into the sofa as into any other aspect of the house. He had piping made to match the main upholstery fabric in tone, but not in texture. The pillow on the right is woven suede, with mustard ocher piping. The cushion next to it is a Clarence House fabric, which Lonstein frayed to create a kind of mane. On the left, unfrayed and unwoven, is a Jack Lenor Larsen fabric.

In the bedroom that he says is “the smallest, but with the best view,” Lonstein left no surface untouched. Overhead, he added the recycled-wood beam and blackened-steel light baffle. The walls are covered in hand-woven panels of Toyine Sellers Fe Karoo Cent Un fabric. The custom bed has a leather saddle-stitch detail, as does the lampshade next to it. Behind a Cassina Cab chair, a 1970s French lamp by Albert Tormos, who lived in the South of France, rests on a 1940s fruitwood and green-glass desk by Ignazio Gardella. The artwork is by James Welling. 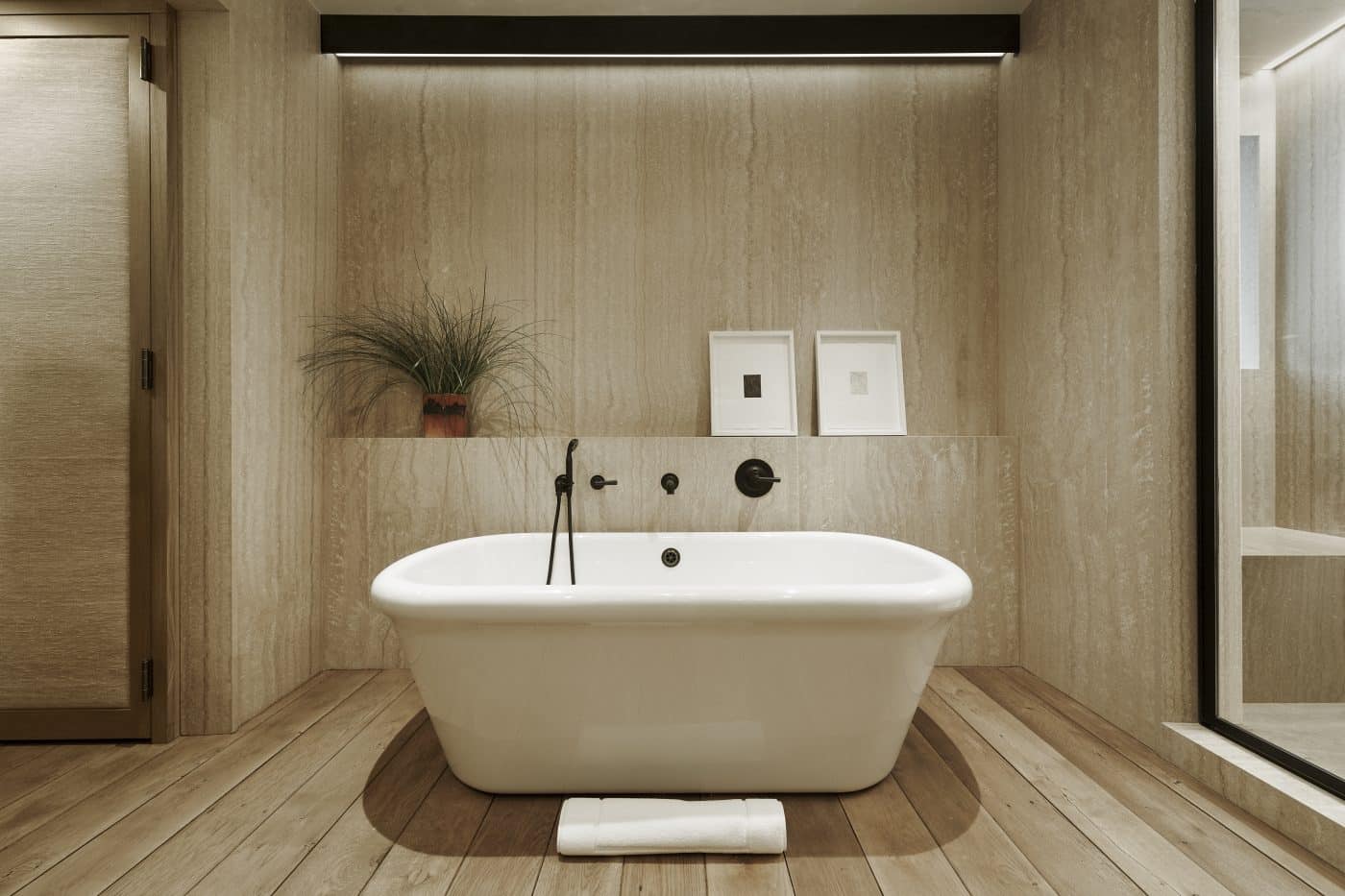 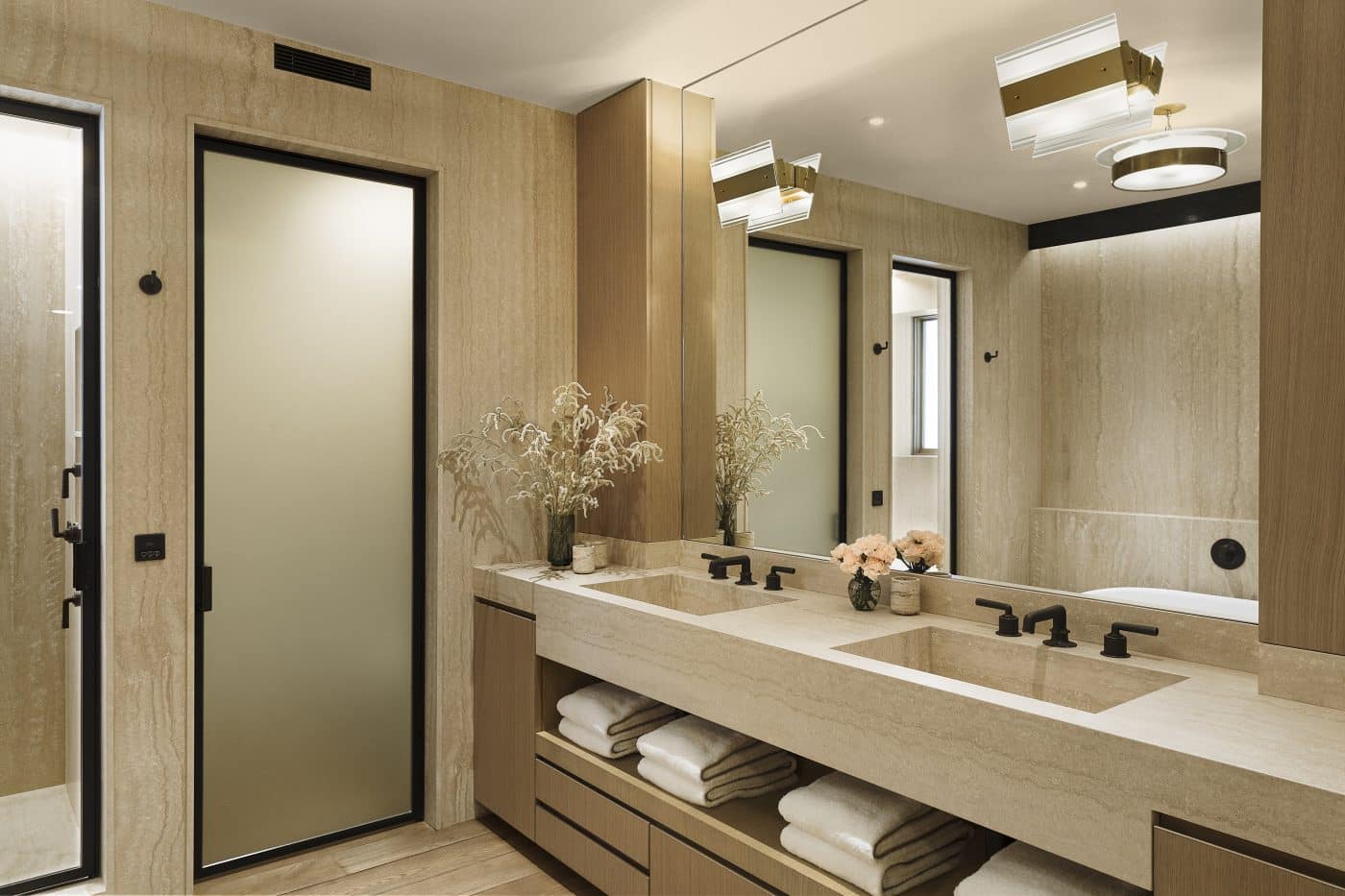 Lonstein chose a different travertine for each of the en suite bathrooms. “I wanted consistency without repetition,” he explains. In this, perhaps the most spa-like of the bathrooms, the travertine is ivory. A freestanding tub rests on a floor of unfinished antique European oak. The dark bronze shower door frames feel appropriate to Aspen, Lonstein says. The Bauhaus sconces date to the 1930s. 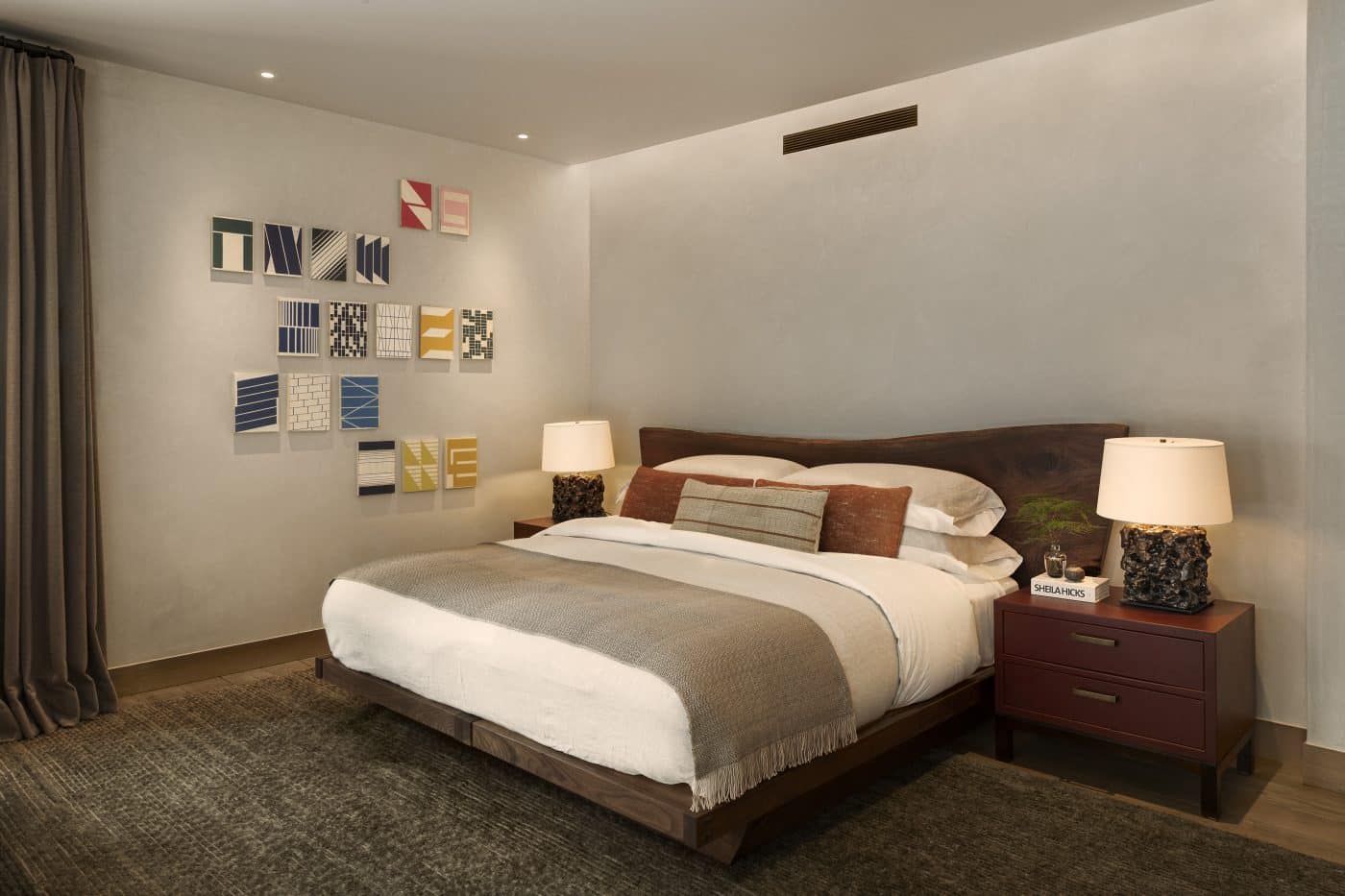 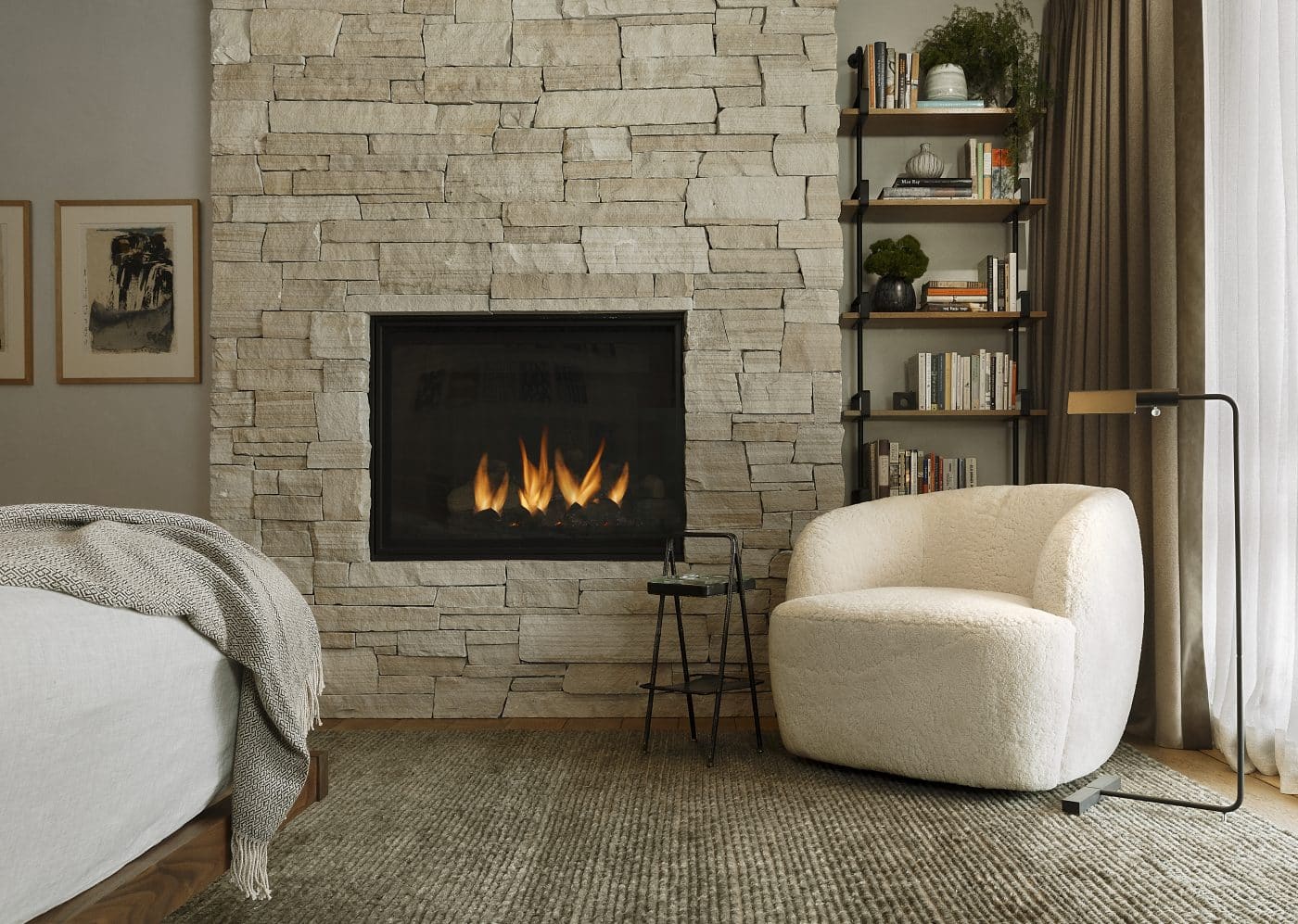 For what he calls “the most serene of the bedrooms,” Lonstein chose a bed made by Mira Nakashima, the great George Nakashima‘s daughter and artistic heir. Given how visually compelling the solid-wood, live-edge headboard is, he decided to leave the wall above it blank. Lonstein designed the leather-wrapped nightstands. Peter Lane made the ceramic lamps that resemble Chinese scholar’s rocks.

Opposite the bed sits a bouclé-upholstered barrel-back swivel chair, a tiny metal Jacques Adnet side table and another carefully constructed dry-stack fireplace. Asked about the process of getting the fireplace just right, he says, “The mason wants to kill me. That’s the process.”

Lonstein clad this bathroom in silver travertine, emphasizing the solidity of the material with the size and shapes of the integrated sinks. Wood elements, including drawer fronts set into the vanity, are oak that was wire-brushed and then painted to match the stone. The sconce is Holly Hunt’s Kori in cast glass and dark bronze.

Lonstein covered the wall behind the custom-upholstered bed in real aspen bark, bits of which occasionally peel off. In addition, “it has moss growing on it,” says the designer, who calls that “a fantastic way of bringing the outside in. You have to have some ruggedness in Aspen.”

A BDDW wall-mounted nightstand hangs next to the bed. On the other side of the room, a Jens Risom armchair stands in front of drapes made from an Angela Brown linen blend with trim of a Holland & Sherry wool. Blue accents, in the drapes, the upholstery fabric and the rug, make this tonally “the coolest bedroom,” Lonstein says.

This powder room, one of two in the house, is an enveloping environment of reclaimed barnwood and chocolate-colored travertine. The latter material forms a countertop that cantilevers out from a side wall so that the wood surface behind it is seen as continuous. The acid-green blown-glass sconce is custom, and the artwork is by Charles Lapicque.

“If a room doesn’t get a lot of light, I like to push that even further,” says Lonstein, who covered the walls of the basement TV room in a dark Holland & Sherry fabric. The custom sofa is extra comfortable — both because of its generous dimensions and its soft down fill. A rug from FJ Hakimian, a painting by Judy Cheng and a bamboo coffee table complete the seating area.

The homeowner has already hired Lonstein to do her new apartment in New York, which she bought, she says, “because my kids are all adults and it was time to downsize.” Had that not been the case, she might have bought another place anyway, she says, “just to work with Clive again.”

“This piece is streamlined, modern and clean, but it’s comfortable. I like the color, which I’d describe as winter white.” 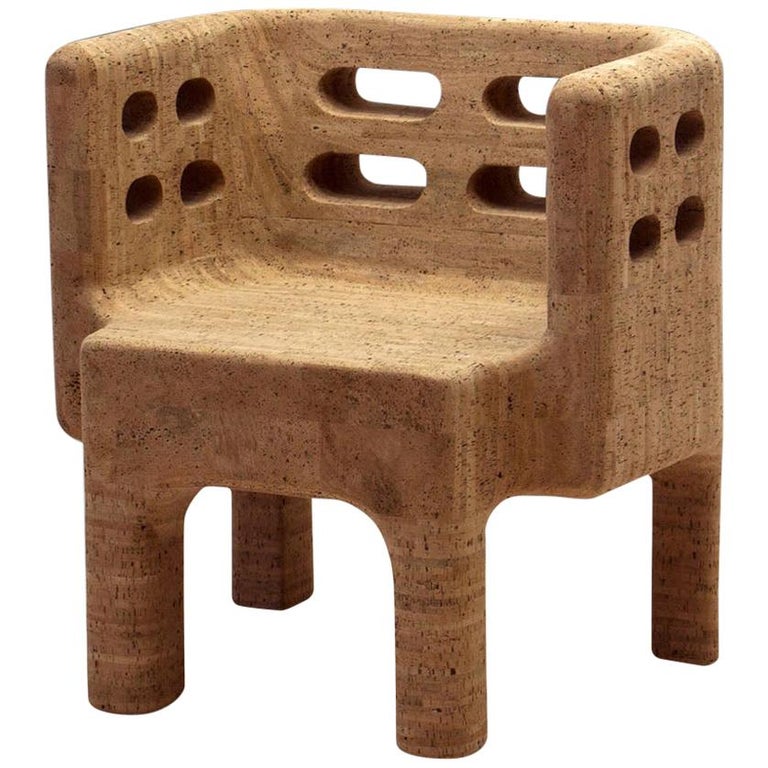 “It has a tribal feel. It doesn’t look comfortable in form, but the material is comfortable. It’s an atypical use of cork.” 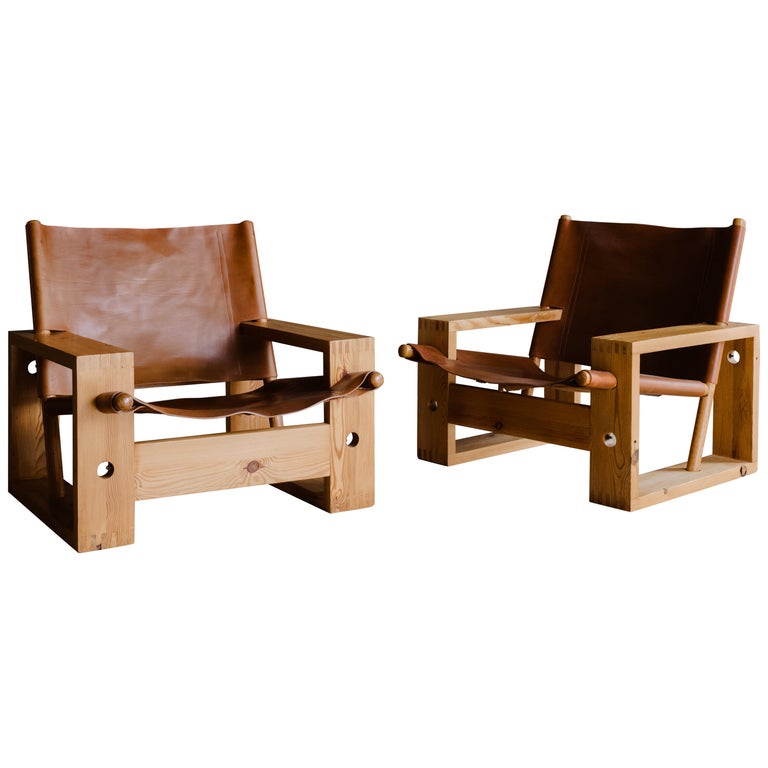 “These have a nineteen-seventies mountain vibe, like something from a ski chalet. They have a chunkiness to them, which seems appropriate to a wilderness setting.” 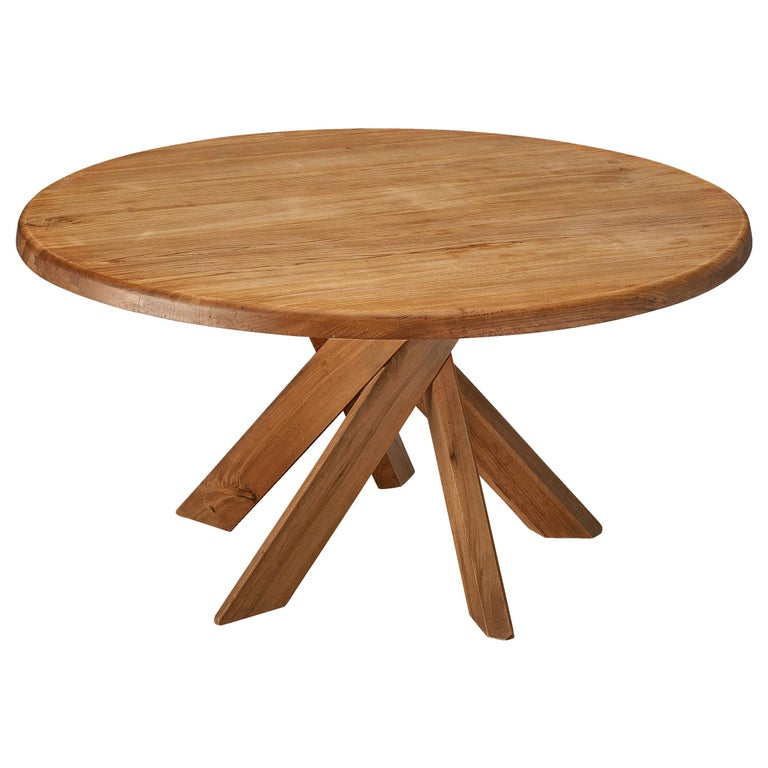 “The base looks complex, but it’s really one repeated element. I like that.” 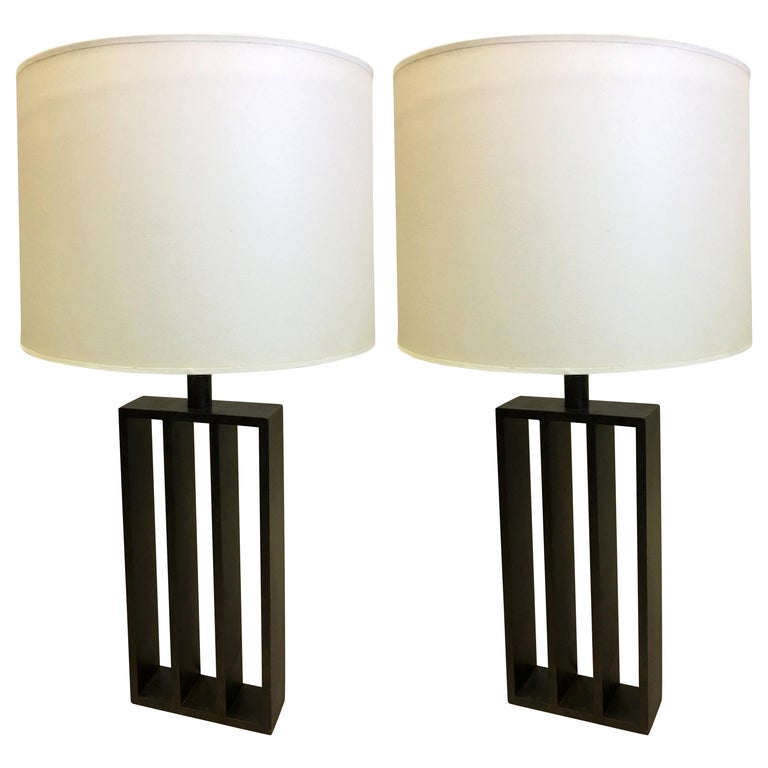 “I like the rudimentary quality of these, and I like the contrast between the dark metal and the open areas. You read the negative space, which becomes very interesting.” 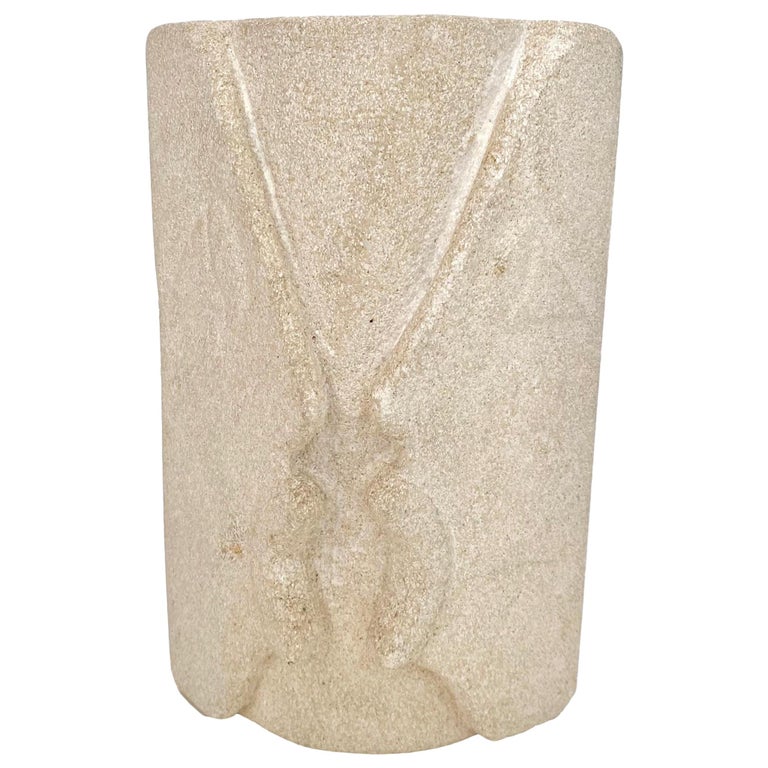 “This seems abstract but is actually figurative, with two face profiles. It’s serious, yet it has a whimsical quality at the same time.”