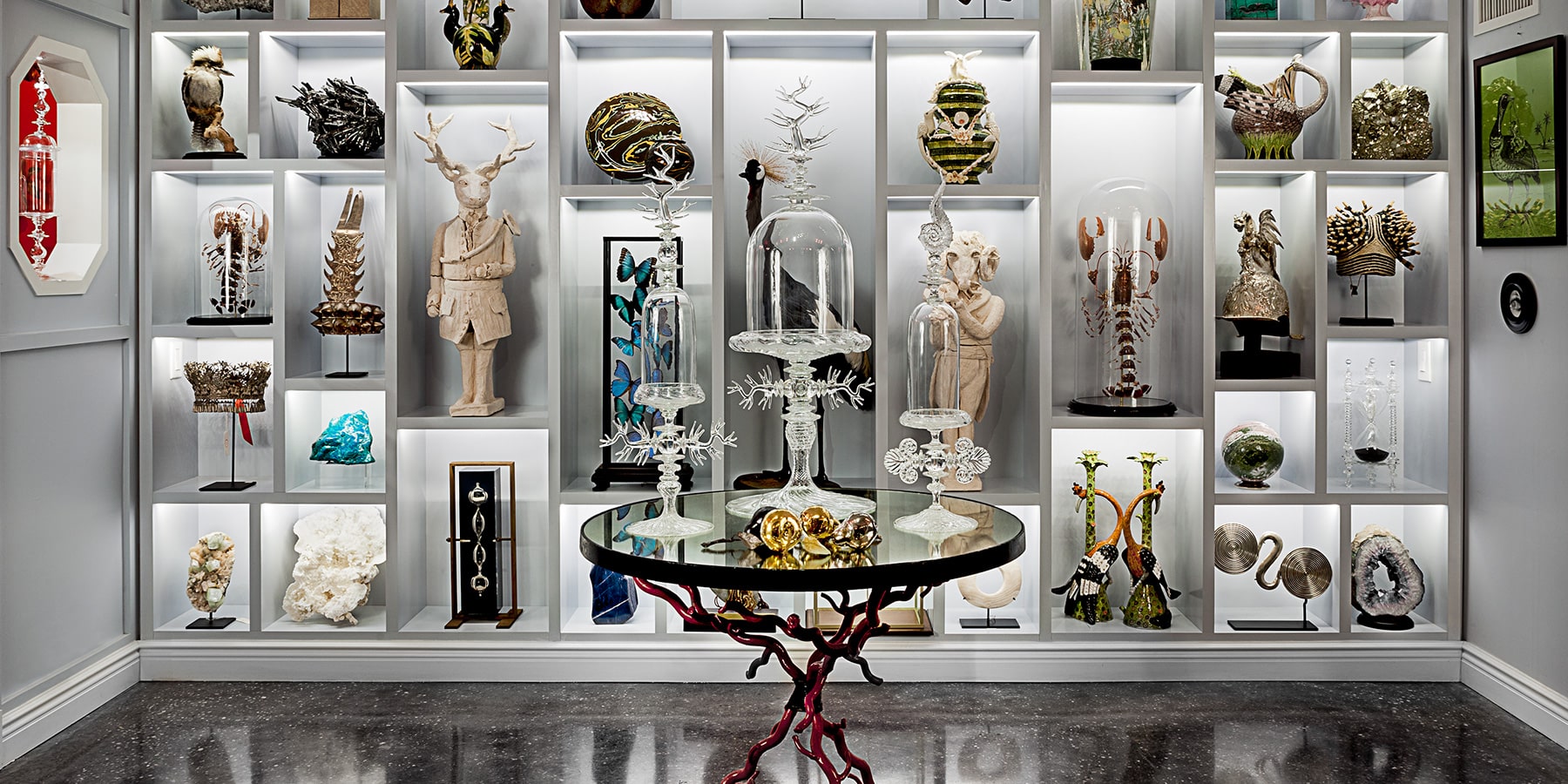 The store's eclectic items, which range from taxidermied Chilean flamingos to pyrite skulls, are handpicked by the globetrotting proprietor. 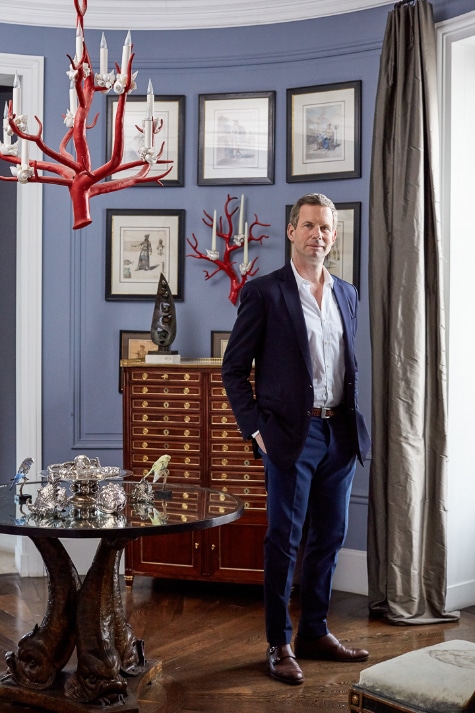 Jamie Creel, pictured here in his Paris apartment, travels extensively to source extraordinary items for his New York store, Creel and Gow (portrait by Stephan Julliard). Top: A wall of shelving highlights the range of Creel’s offerings, from deconstructed lobsters to tribal headwear (all photos by J.M. Kucy).

It’s a crisp, sunny winter day on the swank Upper East Side of Manhattan, and two moving men in blue coveralls are carrying a zebra down the sidewalk before carefully loading it into the back of a truck. A somewhat startled police officer, who had been primed to write the standing vehicle a ticket, offers his assistance instead. As Cindy Adams would say, “Only in New York, kids, only in New York.”

As it turns out, the $18,000 taxidermied specimen is heading south for the season. “The zebra’s going to Palm Beach this afternoon,” its former owner, Creel and Gow proprietor Jamie Creel, explains. “It’s going to a nice home.”

Quickly noting that the zebra was legally culled from its African herd to prevent overpopulation, Creel gently consoles his visitor, “Don’t get sad. We have to talk about something else.”

An easy task in this jewel box of a home-decor shop, set back from the sidewalk on East 70th Street by a low ivy-covered fence. Cofounded by Creel together with Christopher Gow five years ago, it is bursting with unusual objets. There are extravagantly patterned ceramics from South Africa, original wooden seats from the Paris Métro, ceremonial masks from Panama, early 20th-century Chinese opera headdresses, fossils from France, penis sheaths from Papua New Guinea, Moroccan selenite “logs” for the fireplace and, originating a bit closer to home, carnival mirrors from Coney Island — one making you look fat, the other skinny.

For Creel, who divides the bulk of his time between Paris and New York and also owns a riad in Tangier, the shop — as well as his presence on 1stdibs — serves as a useful outlet for his serious travel habit. The concept, in fact, came while he was on a trip to the Galápagos Islands with a group of friends. “One friend and I, we would stay up at night and hatch ideas,” he recalls. “One was opening a store in New York exactly like this. I got so excited that I went back to Paris and started buying things for it right away.” 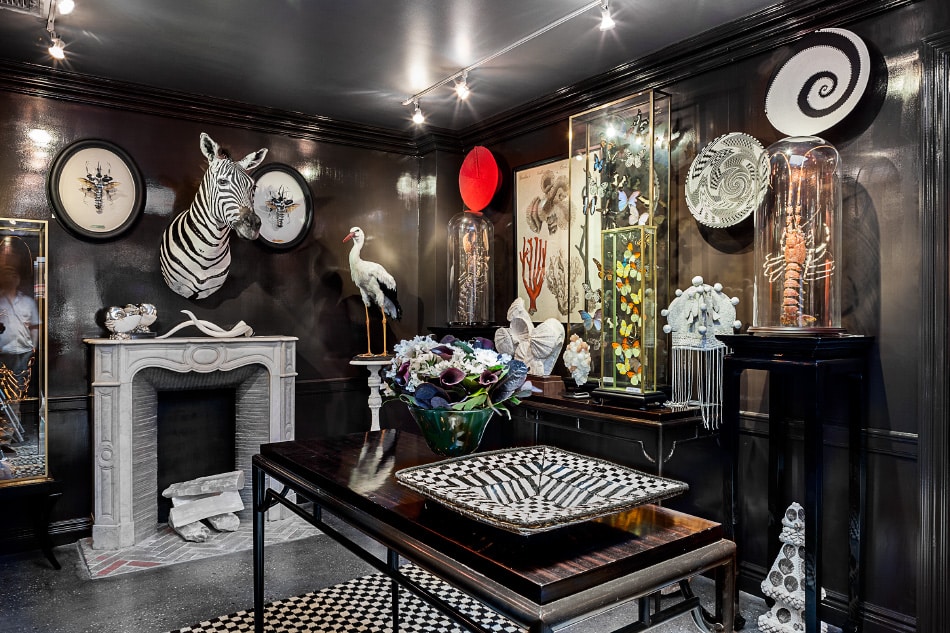 Butterflies in glass cases, a taxidermied European white stork, fossils and horns are among the natural specimens on display. 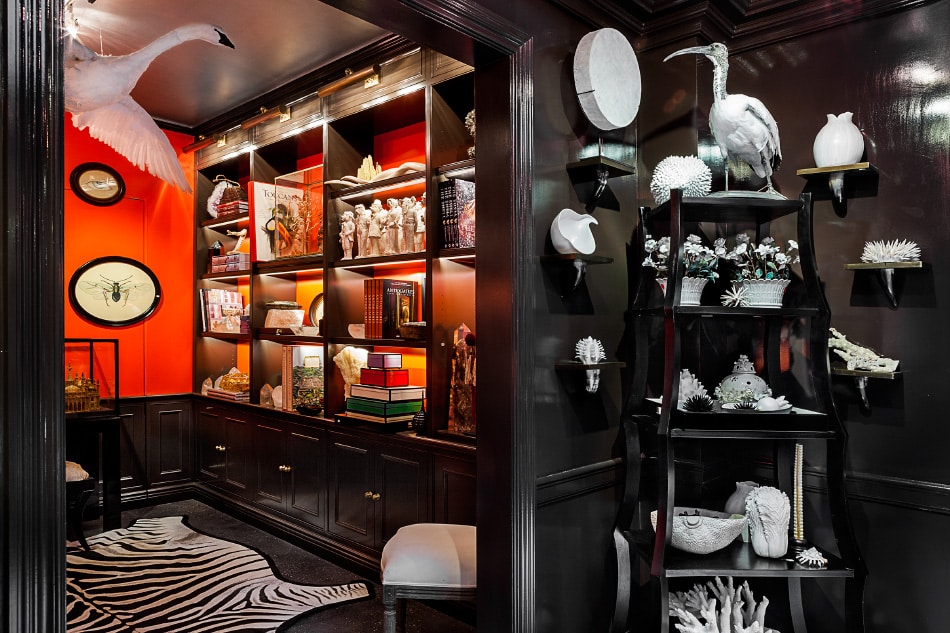 A variety of corals are mounted on the wall and displayed on shelving, while in the adjacent room, a taxidermied bird hangs above a zebra rug. 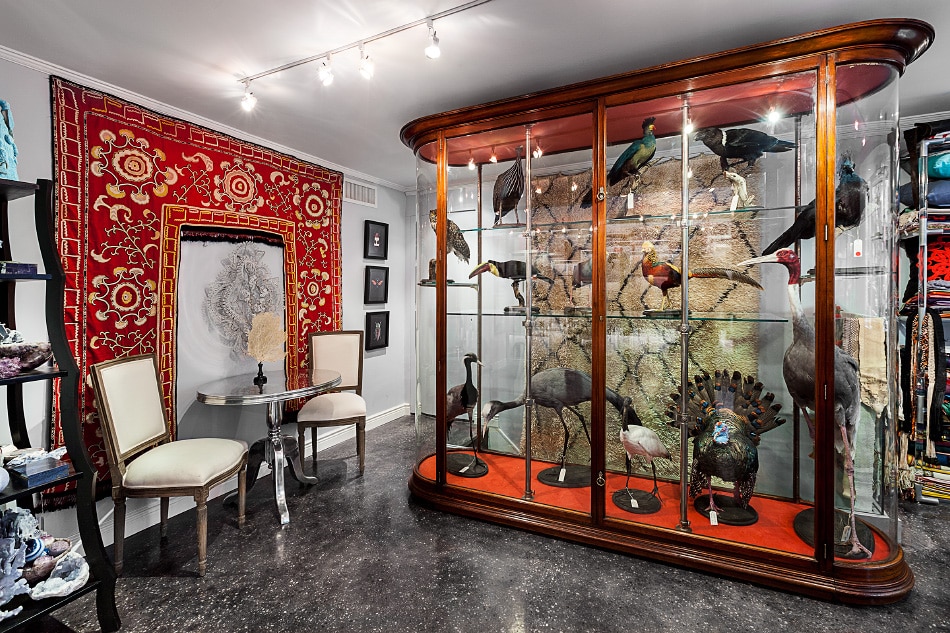 A glass case of mounted birds includes a Stanley crane, an ocellated turkey and a red golden pheasant. 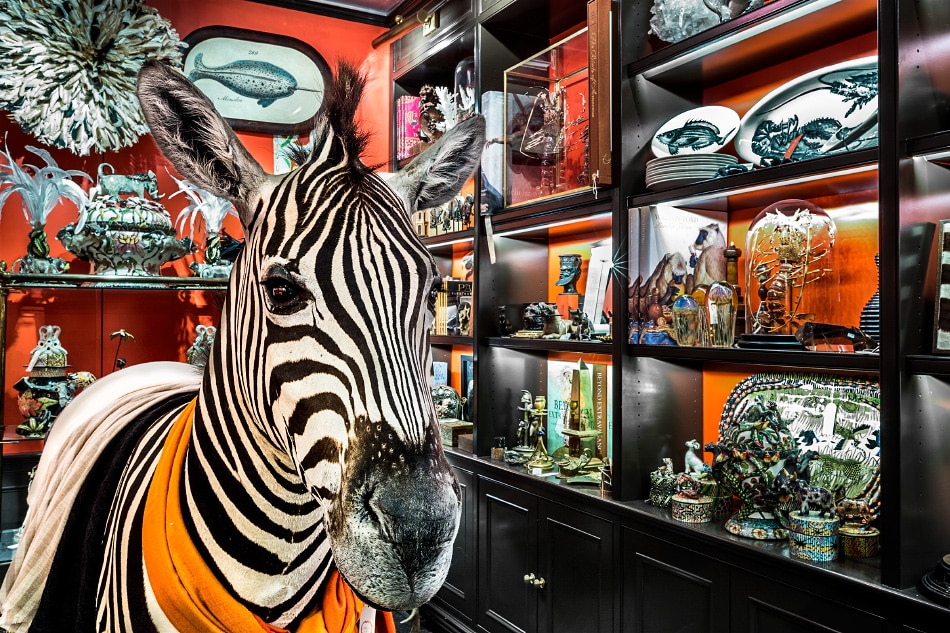 A stuffed zebra stands in a room that includes a juju hat hanging on a wall next to a platter depicting a narwhal and a bookshelf full of specimens, plates and decorative objects. 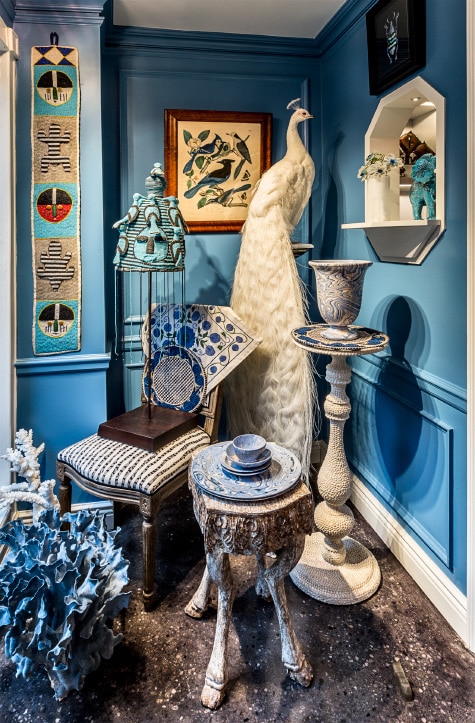 At Manhattan’s Creel and Gow, avid traveler and voracious collector Jamie Creel showcases the pieces he has acquired while crisscrossing the globe, like the taxidermied albino peacock above.

Another friend introduced him to Gow. A former specialist at Sotheby’s and founder of the now-defunct Ruzzetti and Gow, he shared Creel’s proclivity for collecting and travel, and the two teamed up. Creel bought out his partner last fall but kept the shop’s name. He’s also keeping the silver-dipped seashells that were Ruzzetti and Gow’s signature and remain a customer favorite. “All this work is done in Rome by two brothers whose other job is cleaning and repairing the silver at the Vatican,” Creel says. “People come back every year and buy a few shells. Some give a different shell [as a holiday gift] every year, and we keep a record of what they bought previously.”

Nature was initially the primary inspiration for the shop’s inventory, which encompasses chunks of colorful minerals, a megalodon tooth and deconstructed lobsters and insects encased in glass. Creel is a big admirer of Deyrolle, the Parisian specialty retailer famed for its taxidermy, entomological specimens and such. Creel and Gow’s taxidermied exotic birds, he emphasizes, all died natural deaths. “We’re not hunters,” he says. “We’re not going out and killing. None of these birds are raised to be trophies.”

Creel and Gow’s customers, like its products, come from all over the world. Creel notes wryly that after he posted an image on 1stdibs of what he calls his “Park Avenue pot plants” — marijuana plants rendered in tole with gilded pots — “I got a call from a princess from Kuwait. She ordered a bunch of them.”

He is perhaps an unlikely shopkeeper. “When I first opened the store,” he says, “I had a real allergy to selling because I wasn’t used to doing it.” After five years in business, he is still not altogether comfortable discussing prices for the knickknacks that fill his cabinet of curiosities. He hails from old money — so old that an already wealthy ancestor, Lion Gardiner, bought roughly five square miles of land off the shore of East Hampton in 1639 and dubbed it Gardiner’s Island. Although Creel sold his share to his paternal aunt and cousins many years ago, he has fond memories of weekends spent there with his dad.

A fixture in society circles, Creel grew up between Manhattan and the WASP haven of Locust Valley, Long Island, after his parents’ divorce when he was two. “When I was fifteen, my parents sent me to Kenya for three months to live with a family,” he says. “Ever since that trip, I’ve had this bug for travel and Africa, seeing the world.” 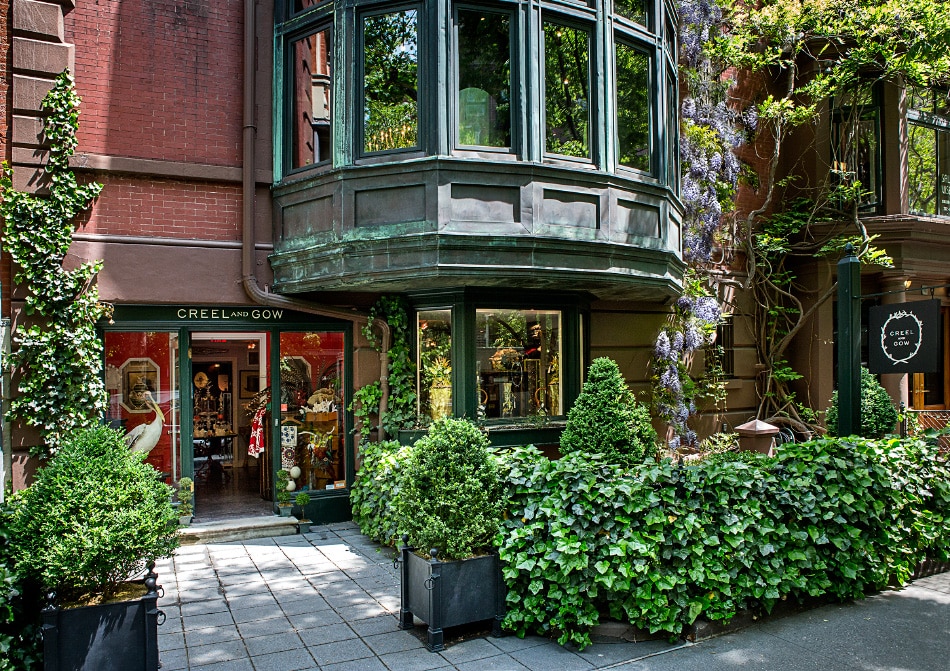 Creel and Gow is located on East 70th Street in Manhattan, on the ground floor of a townhouse once owned by the influential architect Grosvenor Atterbury.

Creel studied communications and historic preservation in college, dabbled in politics and then went into business, including starting a soap line, L’Atelier du Savon, which was sold in Bergdorf Goodman and in its own shop on Paris’s rue Vieille du Temple. But his real passion was collecting — anything and everything that caught his eye. He was spending most of his time in Paris (where he had met Marco Scarani, an Italian-born interior decorator who has been his partner for the past 21 years), and his life in the City of Lights revolved around Hôtel Drouot, the enormous auction house, where he attends the near-daily sales. “When I’m not there, I’m bidding online here,” he says. “I’m obsessed with Drouot. My whole life is [near Drouot’s Right Bank headquarters] — my restaurants, my gym. It is just part of my day. So, this store has been a great outlet for me, because now I can actually buy things for the store.”

Things like a cigar cutter that resembles a miniature guillotine and a costume designer’s illustrations of his creations for the Paris Opera, complete with tiny fabric swatches. Creel has also discovered artisans on trips to Africa and Asia. In Egypt, he chanced upon a ceramist outside Luxor whose footed bowls quickly sold out. On the Indonesian island of Sumba, he has found a host of intriguing items, such as small spear-like sticks for hunting pigs and little silver statues, called mamuli, that vaguely resemble female genitalia. He sources beautiful stone from all over, then has it cut into small bowls in India and Madagascar. 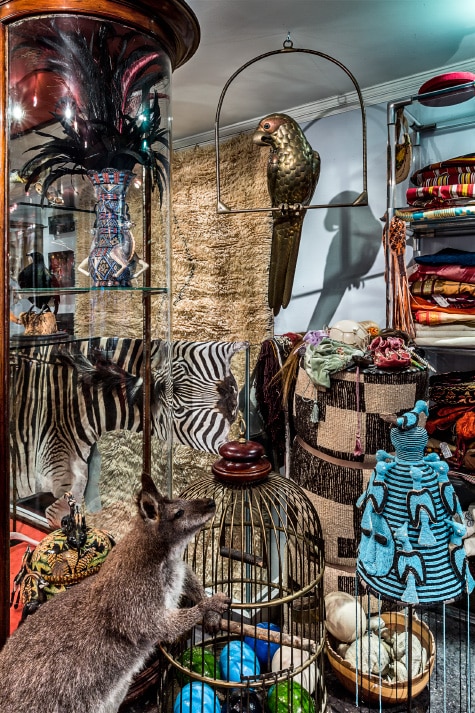 His mother, Diana Colgate, introduced him to the vividly colored, animal-themed ceramics of South Africa–based Ardmore when she brought a few pieces back from a holiday in that country. Each item — an urn with leopards climbing the sides, say, or a bowl formed by the quills of a porcupine — is made by both a sculptor and a painter. Showstopping though Ardmore’s creations are, Creel says he thinks some collectors “are afraid, because there’s so much going on with it. People are so minimal in New York now. In my library in Paris, I have smaller pieces, but they don’t take over.”

Despite the dramatic feel of much of Creel and Gow, Creel insists, “I’m not a maximalist. I edit. I don’t like beige on beige on beige. I like color. I like objects.”

About 10 years ago, after several jaunts to Morocco, Creel and Scarani acquired a house in Tangier. (They also have a pied-à-terre in Buenos Aires but haven’t visited since Creel and Gow bowed.) The geographic distance from Paris to Tangier is about the same as from New York to Palm Beach, Creel notes, but the psychological and cultural divide is far greater. In Florida, he says, “you’re basically with a lot of New Yorkers but in a warmer climate. When you get off the plane in Tangier, you’re on a completely different planet, and I love that feeling.”

The couple bought the riad, called Dar Zero, from respected American decorator Charles Sevigny with the agreement that the expat, who had worked for Hubert de Givenchy and the shah of Iran, could live there until his death. (His 100th birthday is fast approaching.) They try to visit every month or two. “He’s become like a father to me,” Creel says. “He actually wants us to be there.”

Just a short walk from the riad, he found a workshop that is now fashioning brass candlesticks shaped like bird’s legs for him, as well as weavers who have been making bedspreads and other textiles for the shop. Working with such artisans to develop products has added a new creative layer for Creel.

Even then, much of the thrill is in the discovery — and what Creel describes as the knowledge that “no one else in New York is going to see it.” His eye lands on a selection of 19th-century alguier specimens, delicate pressings of seaweed in muted colors that he found at a flea market outside Paris. “Oh, this is so cool! This is another thing I love!” he trills. “Everybody thought I was crazy when I bought them. The idea that someone pressed that seaweed — imagine the time. It’s just amazing to me.”

“And then, they sat probably in someone’s library,” he adds, “and no one thought about them until I walked by them at that little antiques stand and bought them.”

Jamie Creel shares his thoughts on a few choice pieces 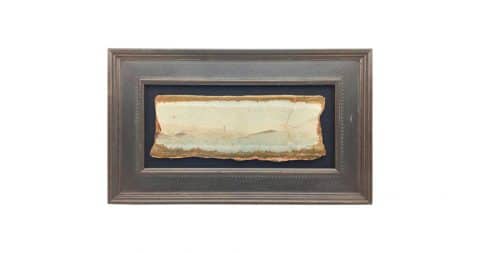 “This rare type of stone is found in Tuscany and has been collected by Europeans for hundreds of years. I was determined to find a source for the shop.” 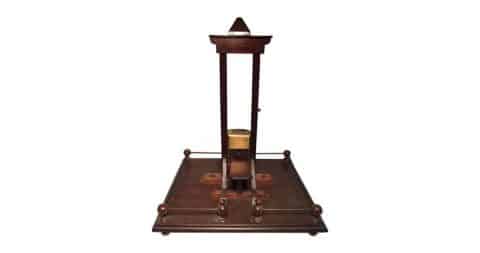 “Obsessed with this antique cigar-cutter guillotine” 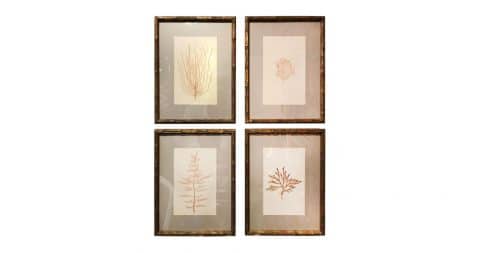 “These 19th-century algueries are very rare. Collecting and pressing seaweed samples was all the rage in the latter part of the nineteenth century.” 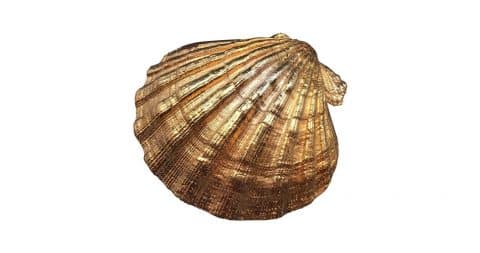 “Continuing the tradition of silver-coated and gilded shells from Ruzzetti and Gow, Creel and Gow has the most diverse collection of silvered and gilt shells available.” 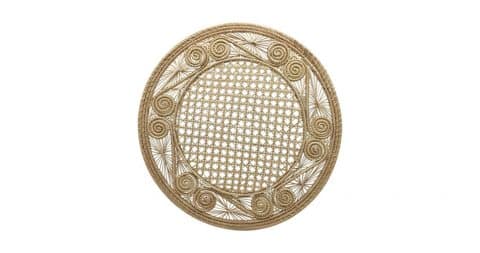 “Handmade in Colombia for Creel and Gow, these place mats are among our most popular and difficult-to-get items.” 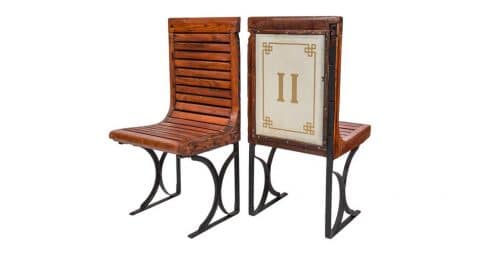 “Love anything with a history and a story. Original Paris Métro seating from the early twentieth century — who sat here?” 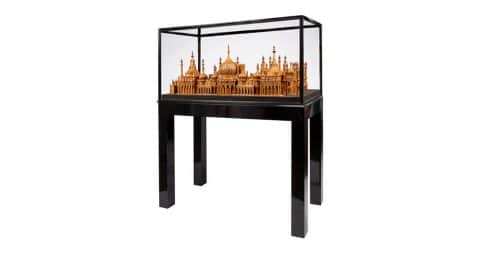 “I have collected architectural models throughout my life. This is one of the most unique and special pieces I have come across.” 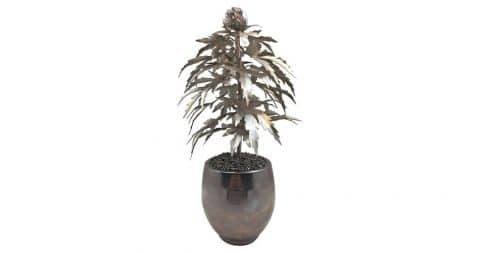