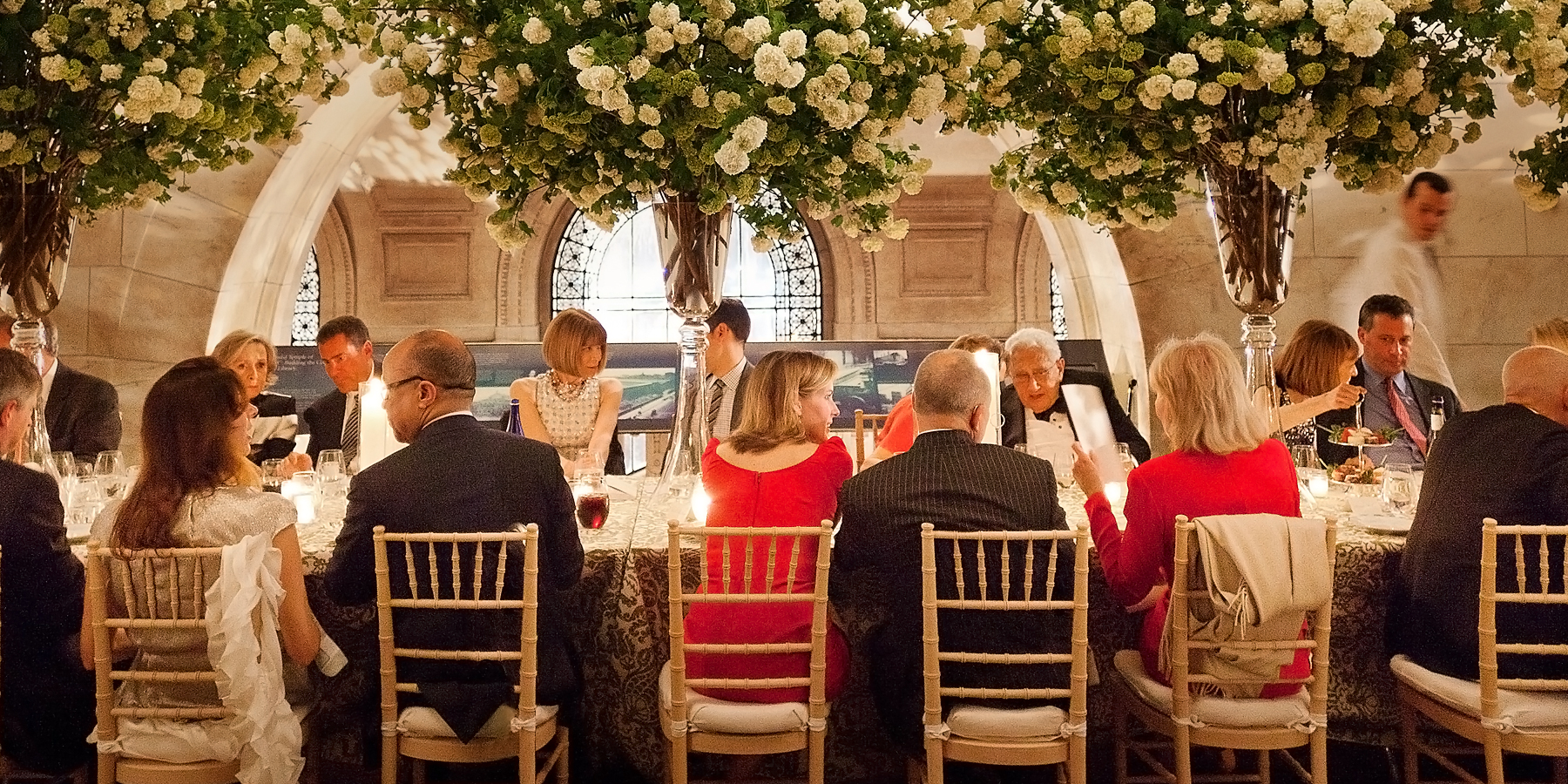 David Monn Is a Master of Momentous Celebrations

The exalted event planner engages all the senses to create some of New York’s most incredible parties. 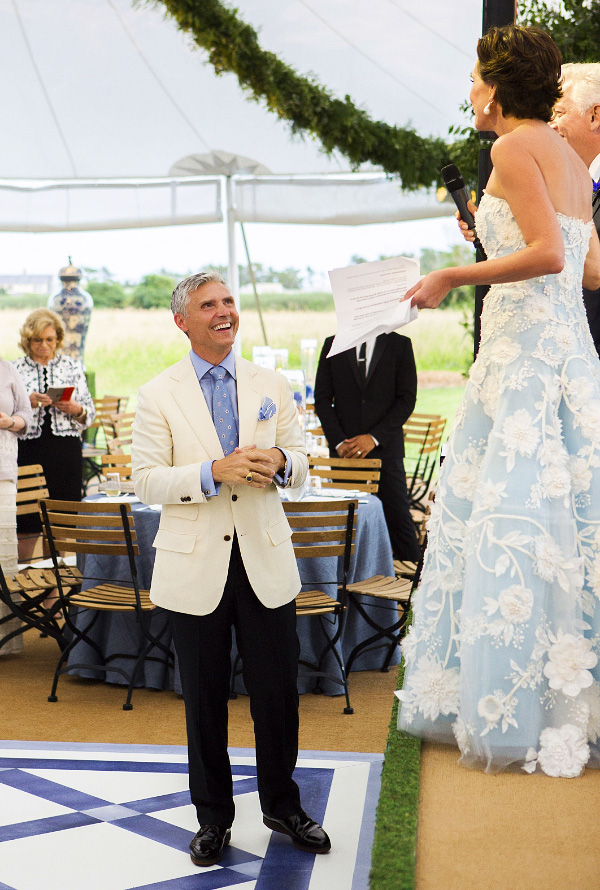 New York–based event designer extraordinaire David Monn (above, at the wedding he created for his dear friend Gayfryd Steinberg to writer Michael Shnayerson) has just published his first book, filled with transporting images of his sumptuous fetes for private clients and cultural institutions (photo by Christian Oth Studio). Top: A gala for the New York Public Library featured four-foot-tall floral centerpieces that blossomed above such prominent guests as Anna Wintour and Henry Kissinger. Photo by Roey Yohai

As you might surmise, growing up in the factory town of Fayetteville, Pennsylvania, didn’t present many — if any — opportunities to attend glamorous parties. Forty-some years ago, it had well under 3,000 residents, many of whom had below-average incomes and less-than-modest aspirations. So how did David Monn, born and raised there, turn out to be Manhattan’s most exclusive and exalted event planner — the go-to guy for such lofty fetes as the New York Public Library’s annual Library Lions dinner and countless posher-than-posh weddings, bar and bat mitzvahs and landmark anniversaries for the one percent? Some might call it dumb luck, but that wouldn’t be true. What propelled Monn was a burning ambition, not to be a creator of grand events but to make something of himself. Somehow, someway.

Monn is one of six children and the only son who wasn’t a jock. His earliest dream job was to be a fashion designer, and he wanted to go to Parsons in New York City. Though his mother had great faith in her son — he was her one child who knew how to sew, going so far as to make both his own tuxedo and his date’s dress for his senior prom — an education at Parsons wasn’t in the cards.

Instead, he pinned his hopes on two of the clothing factories in town — Butte Knit, which was a division of the Jonathan Logan Corporation, and Rose Marie Reid, both now long gone. He got a job at the former, which soon led him to New York City in 1981. By this time, he was 18 and could barely believe his good fortune.

Fortune, however, was only half the story. Monn also had the ability to make the most of an opportunity. His first apartment was a studio in the East 70s, where his neighbors included Mindy Grossman, now the CEO of the Home Shopping Network. He started to dabble in decorating, first for himself, then for his newfound friends, including Grossman.“David possesses that rare combination of passion, creativity, vision and soul,” says Grossman today. It was she who gave him his first big idea. “You need to do hair bows,” she told him. Yes, that’s right, hair bows. He went on to produce these with what would become his customary flair, creating covetable accessories that earned him the attention of the right set of style-setters. 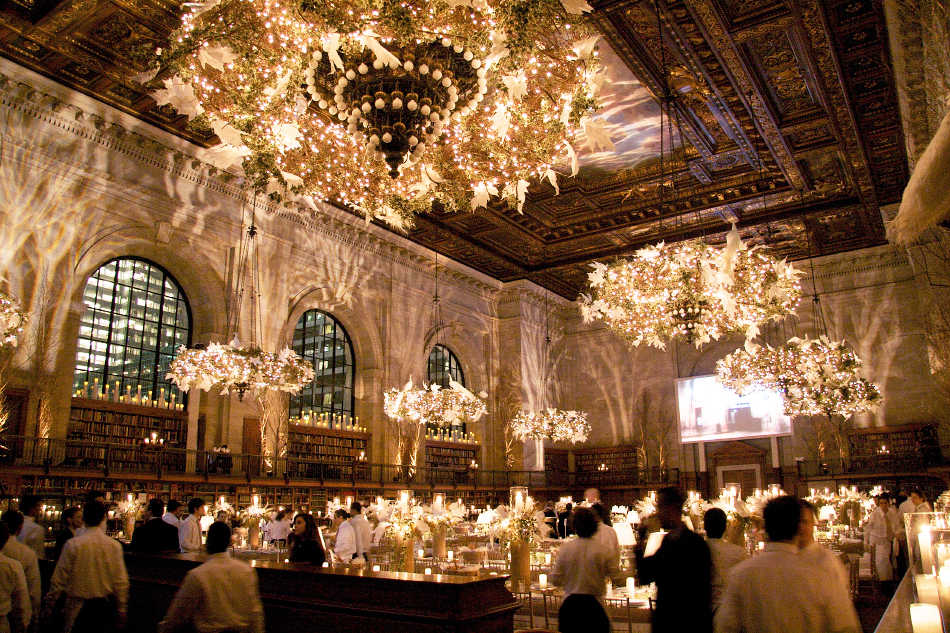 For another Library Lions event at the New York Public Library’s main branch — originally designed in high Beaux-Arts style by Carrère and Hastings — Monn adorned the building’s grand chandeliers with white peacocks (artificial, not living, ones, to be sure). Photo by Robert Bloom 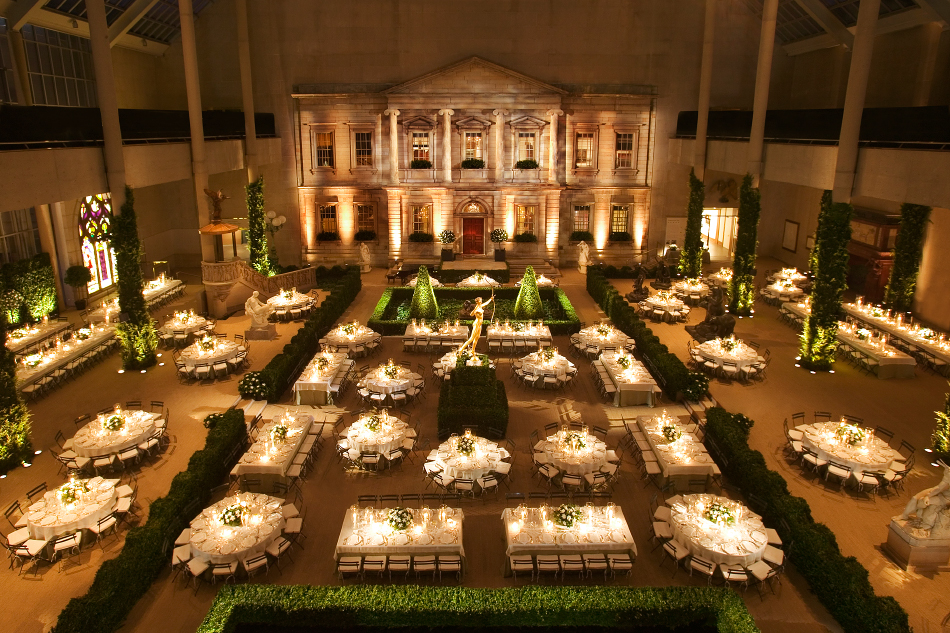 To create the 2005 Costume Institute gala at the Met, which celebrated Coco Chanel, Monn transformed the museum’s Charles Engelhard Court into a formal garden inspired by French landscape architect Le Nôtre. He capitalized on the setting by dramatically lighting the limestone Federal-style First American Bank façade, which forms one side of the enclosed courtyard. On each table he set a bouquet of Chanel’s signature gardenias. Photo by Jason Dewey 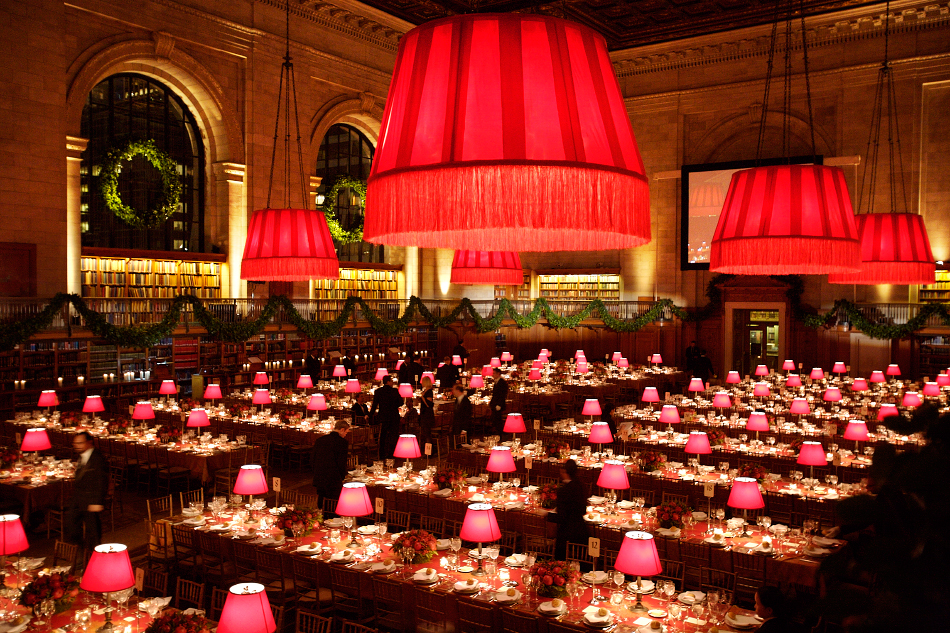 At yet another Library Lions event, Monn turned the Rose Reading Room into a “red light” district, giving it a noirish boudoir atmosphere. (The fringe draping the ceiling lamps was three feet long.) Photo by Korinne Kotovos 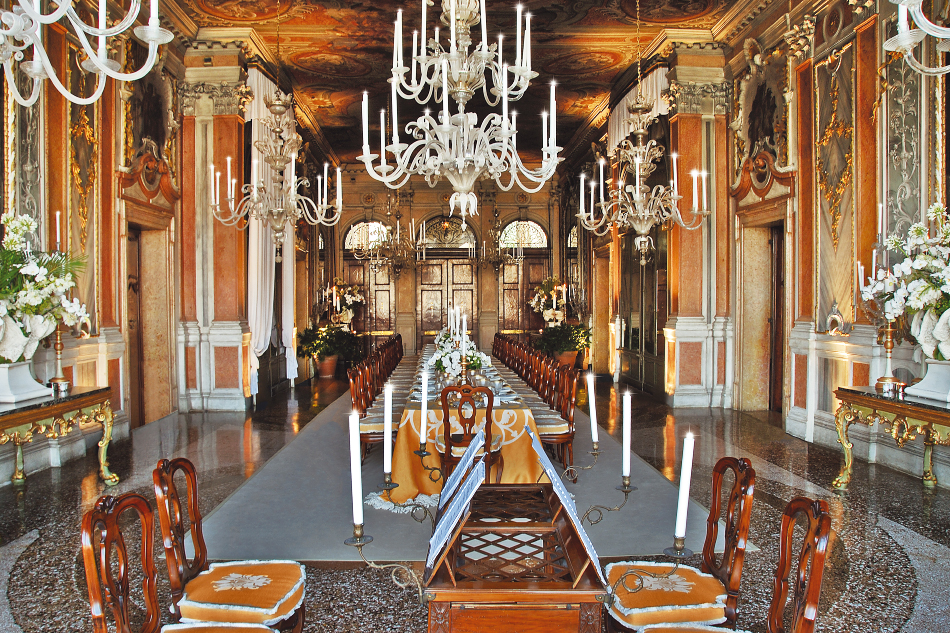 Monn took over Venice’s Palazzo Pisani Moretta — the only dwelling in the city still illuminated exclusively by candlelight — for a client’s 50th birthday party. There, he made beautiful use of the palace’s original chairs, as well as its baroque music stands. A string quartet serenaded guests during dinner. Photo by Daniele Nalesso 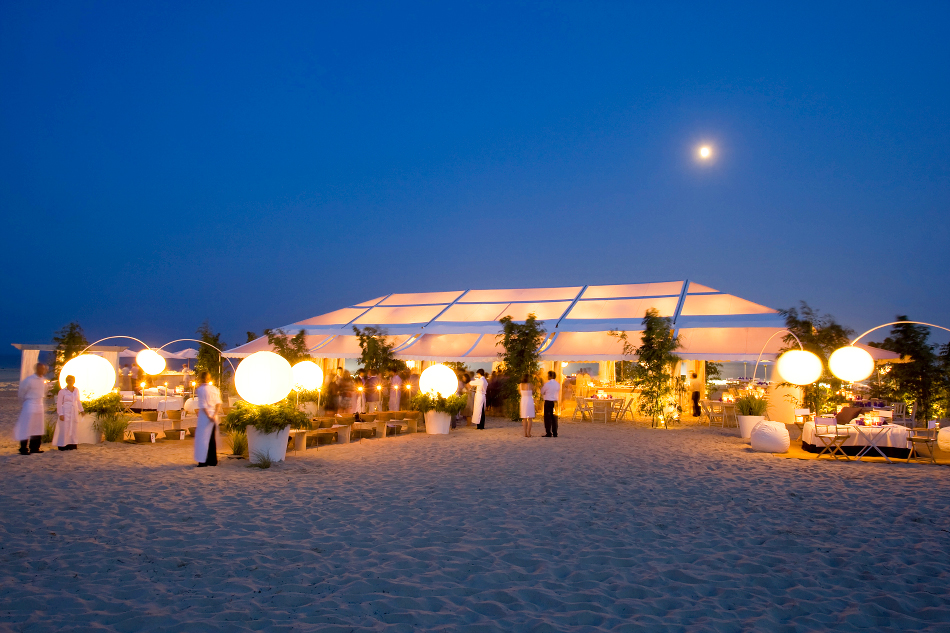 Monn created a hipped-roof beach pavilion — designed to match his clients’ house — for a summertime full-moon party in the Hamptons. Oversized balloons and huge paper lanterns matched the glowing celestial orb above. Photo by Brian Dorsey 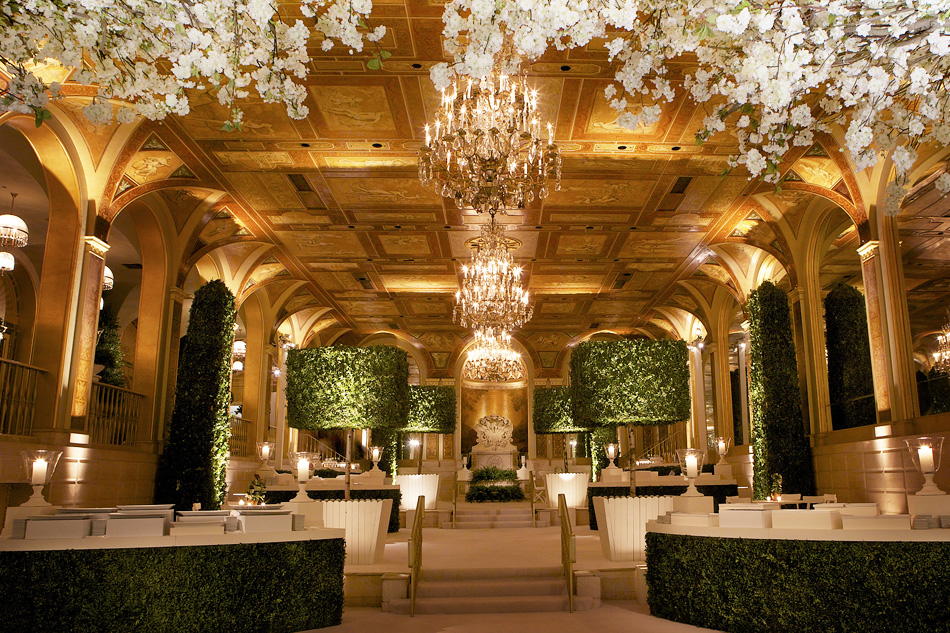 A wedding at New York’s Plaza Hotel — whose centennial celebrations Monn also staged — inspired the designer to place white cherry trees in the Terrace Room for cocktails and to imagine buffet stations in the form of manicured hedges. Photo by Lynn Saverese 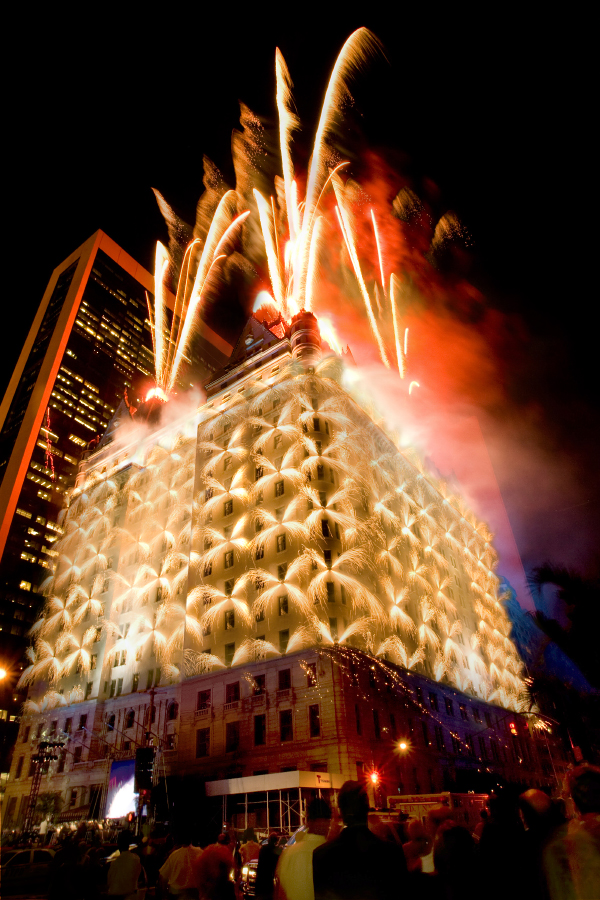 But being a designer of hair bows was not exactly where Monn envisioned himself. He’d set his sights on working for Mario Buatta, the so-called Prince of Chintz and the interior decorator in the 1980s.

Daily phone calls to Buatta’s office were of no avail. Monn simply couldn’t reach him. Then, one day, the Prince himself answered the phone. Oops. Monn convinced Buatta to visit his apartment and judge his talents for himself. Buatta had a look but, to Monn’s surprise, he didn’t offer him a job. Years later, Buatta, a notorious jokester, told him why: “You were too good and too good-looking.”

Monn’s next stop was a 12-year stint in the jewelry business. For the first time, he began to make money. But he eventually realized he wasn’t loving what he was doing, not by a long shot. So he quit.

By this time, he had developed a small but potent circle of friends who adored him and who became his unofficial patrons. “It all began with philanthropist Gayfryd Steinberg, who hired me for the 2003 Library Lions dinner at the main branch of the New York Public Library. All she asked me to do was ‘be creative,’ ” he says, admitting, “I didn’t really understand what that meant, but I knew I wanted to make a mark.” To that end, he brought in countless pear tree branches on a 52-foot-long tractor trailer and arranged them dramatically to reach the skylighted ceiling of the library’s Celeste Bartos Forum. He succeeded, Steinberg recalls, in “creating an unexpected magical forest and casting a spell over that humongous room that no one who was there that night has ever forgotten.”

Party planners have been around for almost as long as there have been party givers, whether it be Oliver Messel, Tony Duquette, Robert Isabell or Carlos de Beistegui. But what Monn does is something different from the rest, and even he is hard-pressed to define it. The closest he came during a recent interview was to describe himself as an “impresario of experiential environments” — although he worried this sounded pompous. And he is not a pompous man. (Demanding, yes. Precise, sure. At times, even, hard to work for. As he puts it: “I am not easy.”) 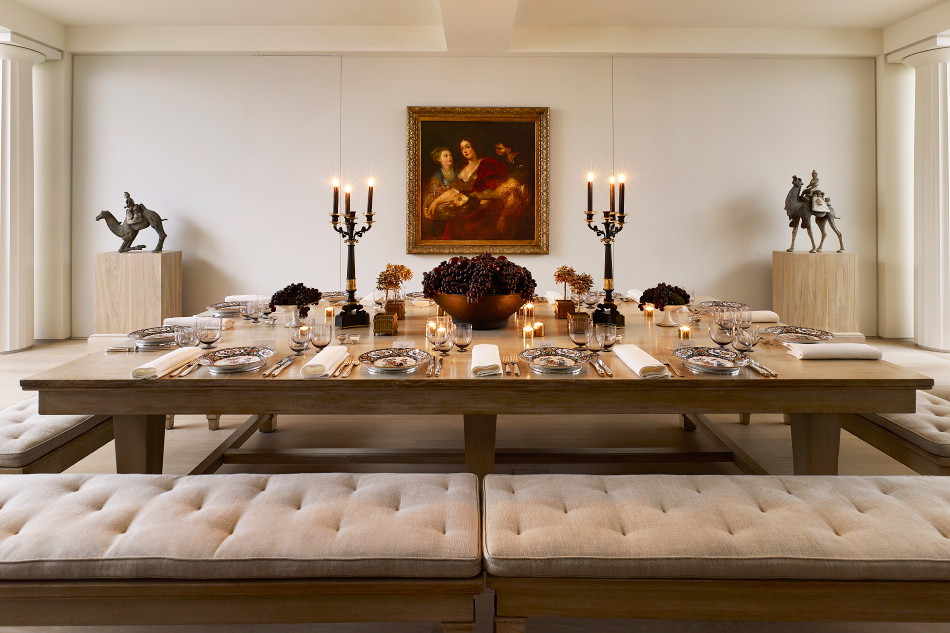 Monn devotes the last chapter of the book to his own home, a serene retreat of pale neutral hues illuminated by natural light. Here, he sets an intime dinner for 12. “I want my table to be a place where I balance beautiful formality with relaxation and where good friends enjoy gathering,” he writes. “I chose benches because they make you lean in and connect. The camels are Tang dynasty burial figures.” Photo by Björn Wallander

Shirley Lord Rosenthal, wife of the late Times editor Abe Rosenthal and one of Monn’s mentors, says: “I am still waiting for him to find time away from the demands of his successful life to become also renowned in the make-believe worlds of theater and the movies.”

Monn opens the book by writing, “As a child, I was always creating imaginary places.” He now makes them a reality, and that makes his clients’ dreams come true.

The proof of his particular (and particularly complex) pudding is in the events themselves, which are illuminated in a dazzling new book — Monn’s first — titled David Monn: The Art of Celebrating  (Vendome Press). Its 360 oversized pages showcase Monn’s extravagantly decorated events, including ones in Venice and at New York’s Four Seasons restaurant, as well as a White House state dinner, several Library Lions galas and more — each of them breathtaking. The most restrained of the spaces seen in the book, but no less stylish than the others, is Monn’s own light-flooded apartment in New York’s Chelsea neighborhood, which comprises the final section of the book. Monn’s home manages to be both classic and contemporary, with soothing shades of beige and off-white throughout. He calls it his “refuge.” Considering his breakneck schedule, he needs one.

Legendary but famously reticent street- and society-photographer Bill Cunningham had agreed to write the book’s foreword but, sadly, died earlier this year before he had the chance to do so. Monn was not only friends with Cunningham but was indebted to him. In 2003, in his Sunday New York Times column, Cunningham covered Monn’s first New York Public Library party. Within it, he ran a photo of the room — decorated but empty — giving Monn clear credit for the design.

A day or two later, he received a congratulatory call from Abe Rosenthal, then the Times’s executive editor. Monn politely thanked him. Then, he recalls, Rosenthal told him, “I don’t think you really understand. Until Sunday, Bill Cunningham, had never put a photo of the decor of a room with credit to the designer on his page. Ever.”

When Monn had the chance to thank Cunningham (whom he called Billy), Cunningham replied: “My boy, you create beauty that must be captured.” And so it has been — exquisitely — in this book. 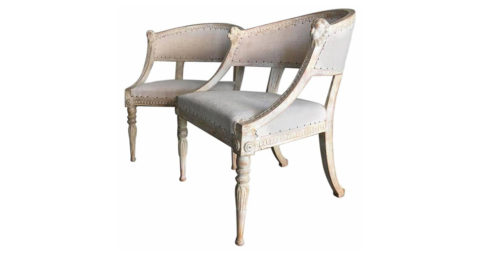 “I like these for their classic, edited design. The neutral quality of the finish means they’ll go with everything.” 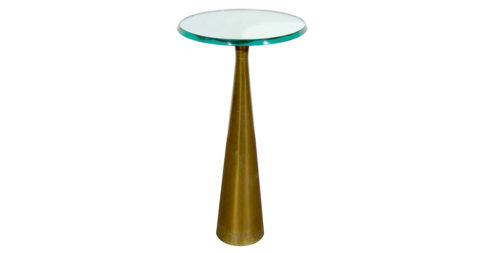 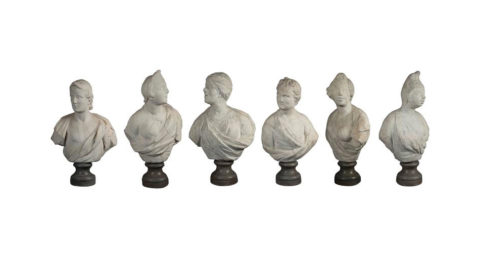 “These really put the art in commedia dell’arte.” 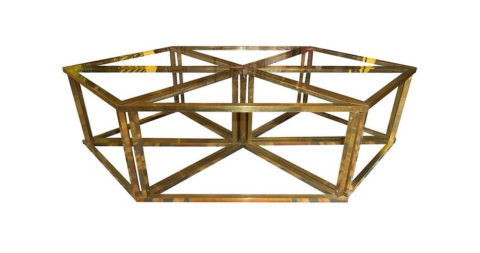 “Such clean design. A triangle has perfect symmetry, and the fact that this puts together six of them only magnifies the piece’s beauty.” 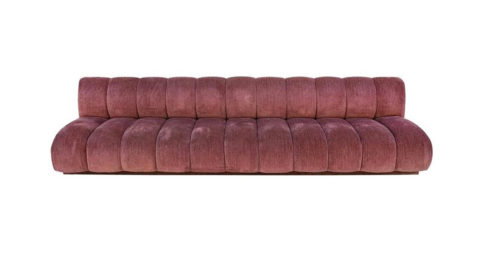 “I love the color and the simplicity, authenticity and scale of this piece.” 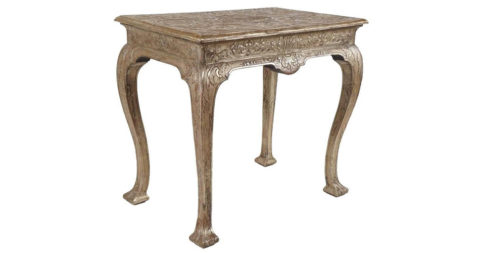 “A typical George I piece would be gilded, so the silvered gesso here feels modern. The patina and under-color are great because they make it hard to tell whether what you’re seeing is actually silver or not.”