Designing Women from around the World Alight at the 1stdibs Gallery 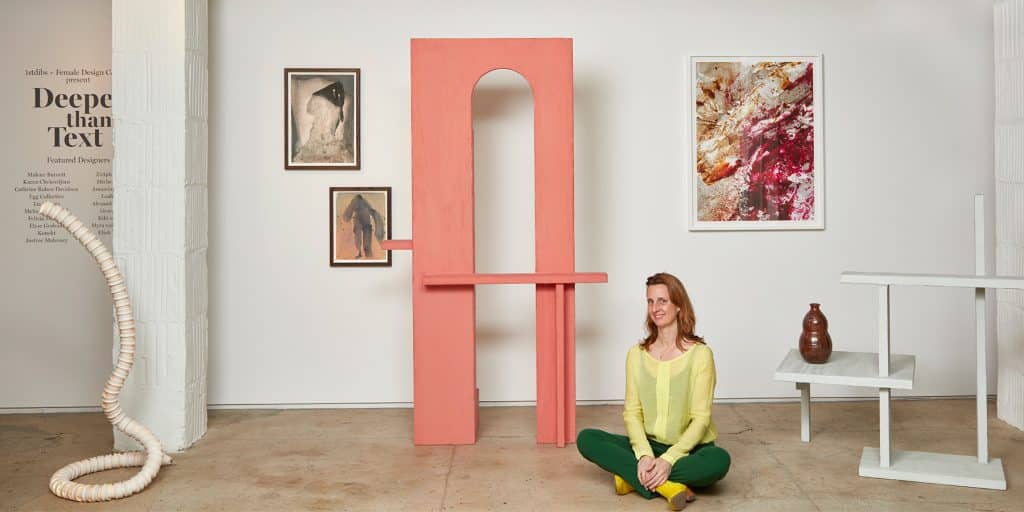 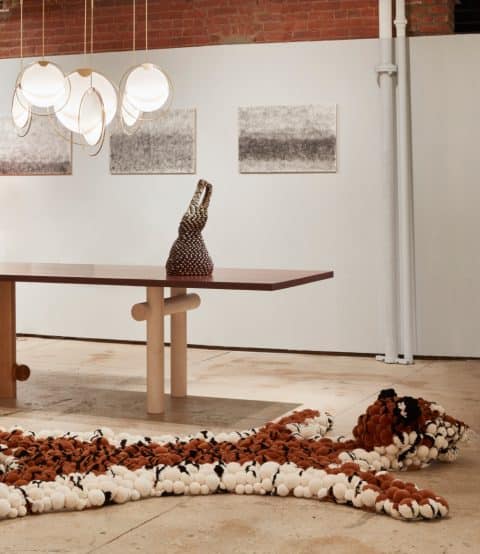 May 12, 2019“Deeper than Text,” the Female Design Council‘s new exhibition at the 1stdibs Gallery, features works by women artists and designers from around the globe. Top: Dutch designer Kiki van Eijk sits among her pieces in the show, including (from left) Freeform ceramic floor lamp, Space Poetry arch and Space Poetry platform.

Does some ineffable something set art and design by women apart from art and design by men? Lora Appleton thinks so. Appleton is the founder of the Female Design Council (FDC), which has grown to include nearly 200 designers and artists in the one and a half years since it opened to members. She uses the word poignant to describe the innovative pieces a score of FDC members (plus a few nonmembers), from places as distant as Lebanon and South Africa, are showing in the exhibition “Deeper Than Text,” at the 1stdibs Gallery in Chelsea through May 31.

“Women put a deep emotional dedication into their work,” says Appleton, who is curating the show. “I think men traditionally have a clearer line — historically, they go to work, and then they come home and they’re with their family. With women, there’s a lot of blur. It’s a constant process.”

Appleton herself started her Manhattan gallery, Kinder Modern, which sells new and vintage modernist furniture for children, at home six years ago. She founded FDC shortly after the 2016 presidential election. “Triggered and upset about the status of women and their visual representation in the media,” she explains, “I felt the need to tap into a community.” She emailed a few female colleagues to gather for a conversation about “what we need as women in design.” From that initial roundtable, the FDC was born. 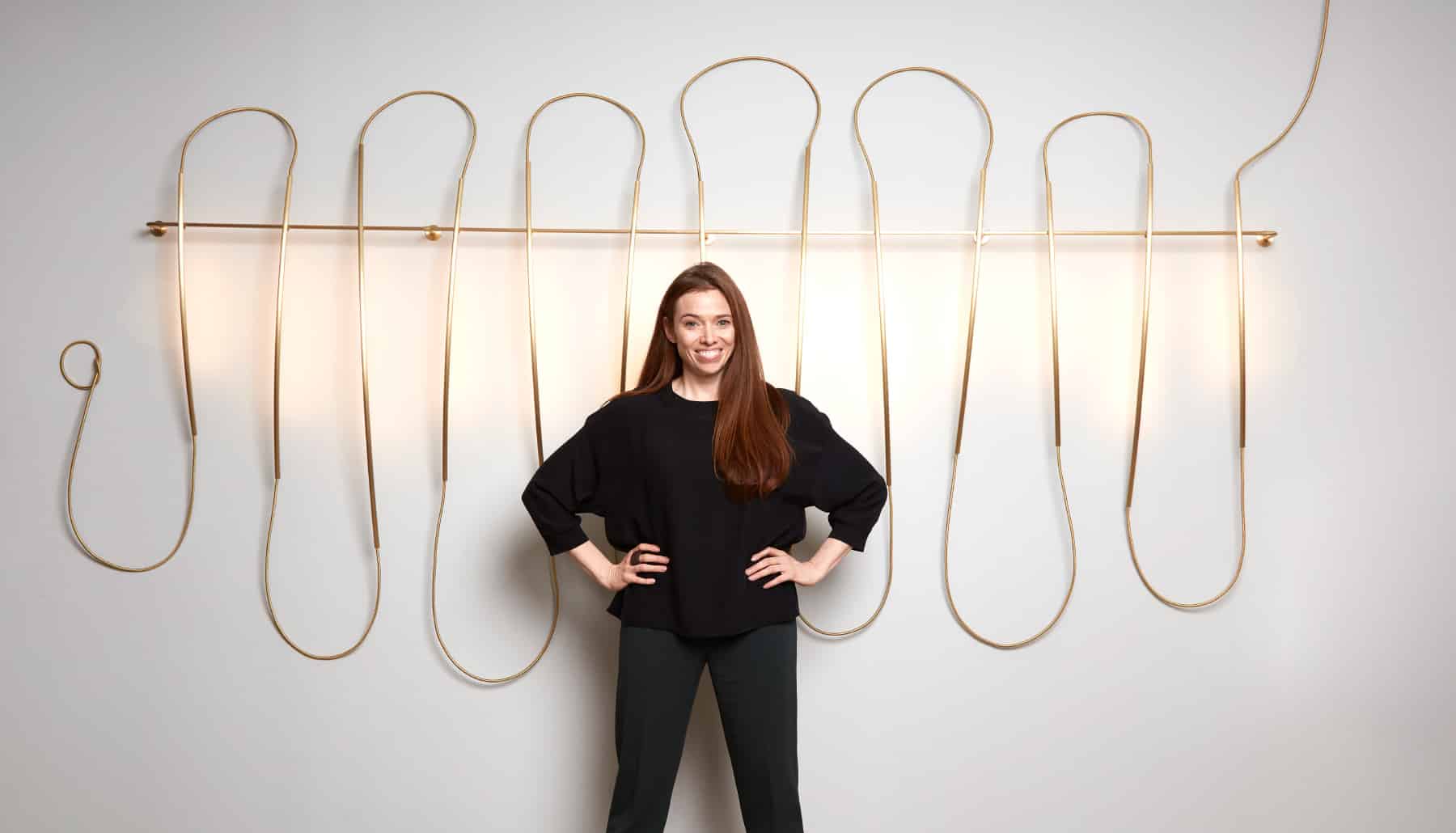 Elish Warlop’s Brass Line lamp, which resembles a sketch, features bars that can be slid back and forth to change the density of light and shadow along the wall.

Although “Deeper Than Text” represents the first ingathering of the FDC’s far-flung membership, the decision was made to include work from outside the organization. “The goal,” explains Appleton, “was to have a mix of members and nonmembers featured to extend our reach for designers and exposure for their work, displaying their work at one time and place.” The installation makes use of the raised space in the middle of the 45,000-square-foot 1stdibs Gallery, which opened last February on the seventh floor of the historic Hudson Terminal warehouse building as a high-end bazaar of 1stdibs dealers plying their intriguingly varied wares. 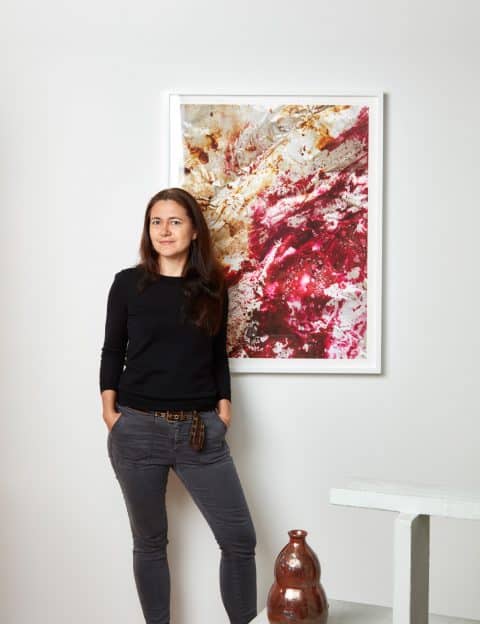 Alexandra Rowley stands in front of Untitled, 2010, from her “Process” series, which embraces the idea of multiple outcomes, layers and open-endedness.

“As you come up the stairs” to the FDC exhibition, says Appleton, “you’re welcomed by innovative lighting, ceramics, textiles, photography, works on paper and, of course, furniture from all over the world.” The impactful display, she adds, “shows how vast and dynamic this community of women designers really is.”

Some pieces are set directly on the floor, others placed on pedestals, hung on adjacent walls or arrayed in eye-catching vignettes. New York–based artist/photographer Alexandra Rowley’s evocative works on paper, for instance, play off Dutch designer Kiki van Eijk’s Space Poetry series of tall geometric platforms that explore the relationship between space and architecture.

Van Eijk is not alone in evoking poetry in her work. Karen Chekerdjian’s Iqar (Icarus) — a low, origami-like table made of a single sheet of folded aluminum polished to a mirror-like sheen, brought to the show from Beirut — is meant, she says, to “remind us of the rewards, rather than the risks, of flying close to the sun.” 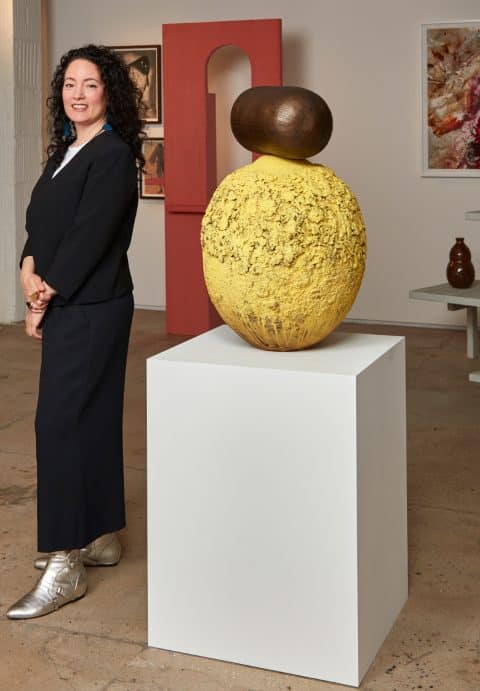 Elyse Graham, of Los Angeles, is premiering more of her extraordinary colorful and graphic resin vessels. Cape Town’s Southern Guild gallery has sent pieces by two artists: Justine Mahoney’s fantastical toy-like figures, each with a name and a story, fashioned of such materials as bronze, marine plywood and glass; and large-scale ceramic totems by Zizipho Poswa that draw on her Xhosa heritage.

Of course, everything is for sale through 1stdibs. The FDC has its own brand-new shop on the 1stdibs website, and some exhibitors  have individual storefronts on the platform as well.

From left: Malene Barnett and her Makeda wool and silk tapestry; Amanda Richards with her pearl sconce in resin and metal; and Liz Collins in front of her fur screen of steel and woven selvedge textile 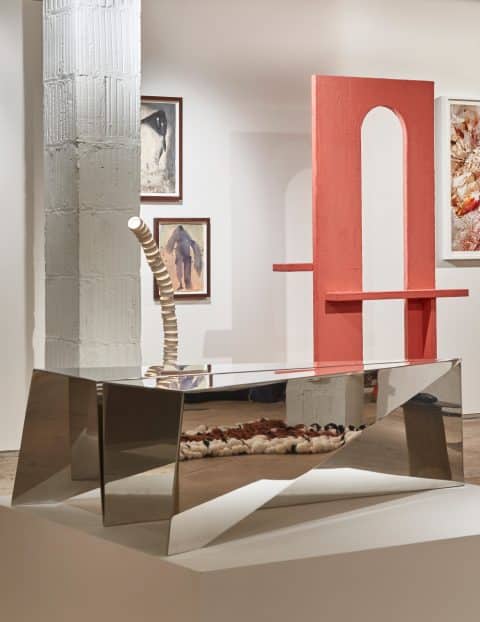 Karen Chekerdjian’s Iqar table is made of a single sheet of aluminum.

Stephanie Beamer, one of three female partners in Egg Collective, has been a member of FDC’s advisory board from the beginning. “Even in our current day, women designers are still underrepresented in numbers,” she says. “The network of female designers we’ve been able to build in the last two years, and the camaraderie, are an important and welcome change. And it’s wonderful to have 1stdibs’ support in shining a light on female-designed work.”

The show’s title refers to Appleton’s frequent frustration with media coverage of women designers. “When I read magazines, I often see incredible furniture and objects made by women, but the articles focus more on the fact that they’re women and have kids than on the work itself,” she says, adding that the FDC show is “digging into what’s behind the work, the consistent effort that goes into design and production, the process and the outcome.”

You can decide for yourself whether the pieces on display are uniquely, inherently female or just uncommonly original, beautiful and beguiling examples of contemporary design.