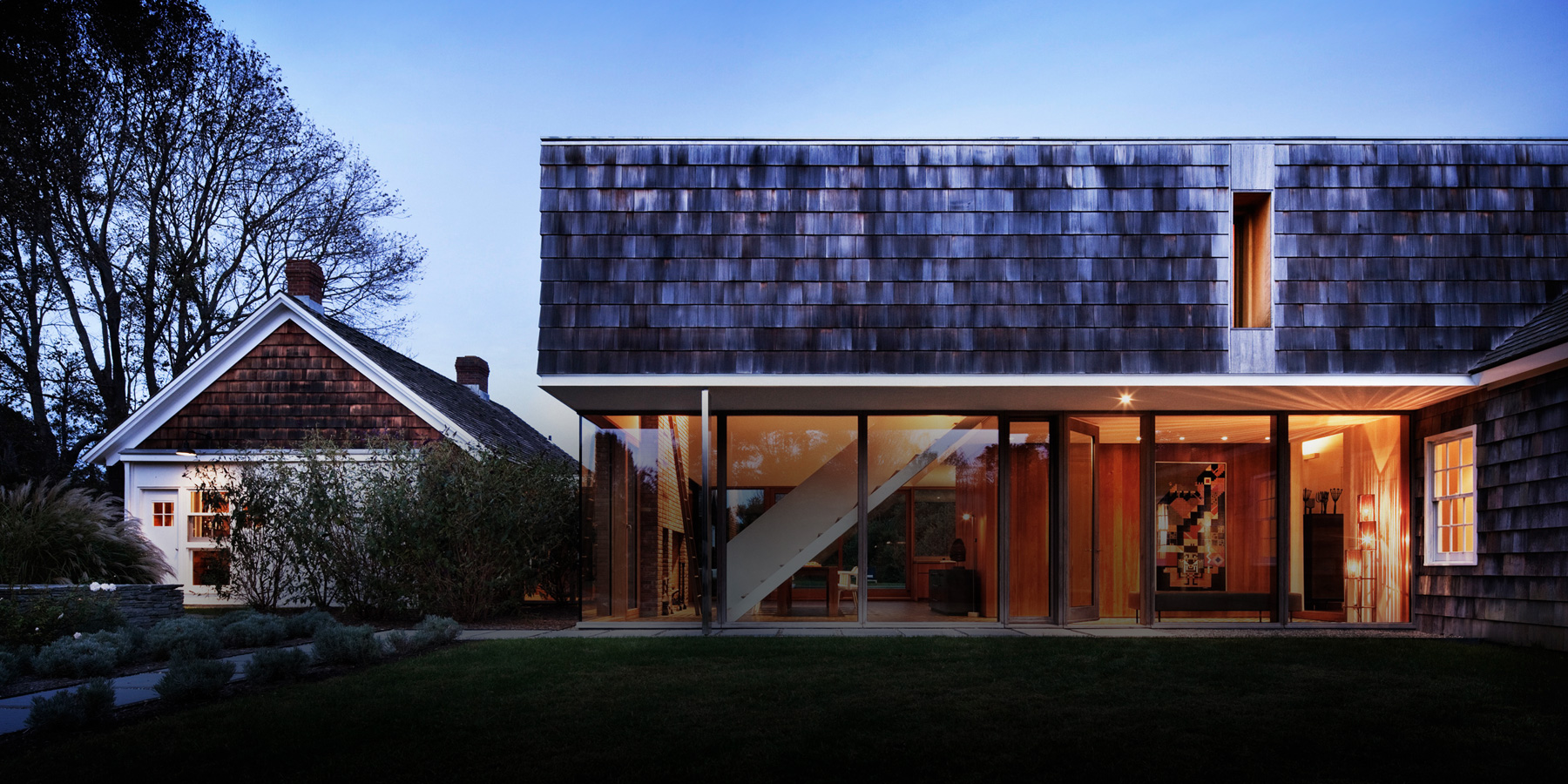 The author of Design in the Hamptons, muses on what sets apart the 19 stunning projects in his new book: authenticity and a sense of place, qualities often missing in the sea of McMansion and overused design tropes that today flood Long Island's East End. 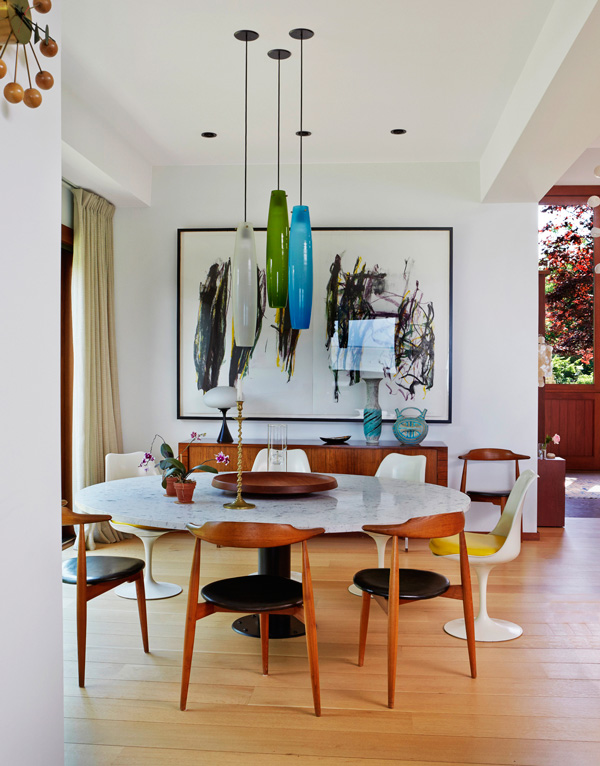 September 3, 2014In this Springs home designed by Joe D’Urso, a painting by Joan Mitchell, who worked for years in East Hampton, offers a dramatic backdrop to chairs by Hans Wegner and Eero Saarinen (photo by Anastassios Mentis). Top: A Hamptons house updated and expanded by Christoff:Finio Architecture (photo by Scott Frances). All images courtesy of The Monacelli Press

A home in the Hamptons has come to be seen by many people as the ultimate sanctuary and escape from urban life. So evocative of a luxe, relaxed lifestyle is the legendary enclave on New York’s Long Island that — as I write in the introduction to my new book, Design in the Hamptons (The Monacelli Press; $75) — mass-market manufacturers flood their stores and catalogues with artificially distressed, overstuffed new furnishings with names that reference towns or places along the East End. But these ready-made designs, intended to assist with the creation of the unique, instead contribute to the formulaic “anywhere” look that has become the nemesis of the memorable, the specific and the authentic.

And authenticity is at the heart of the 19 projects in my book, from a modernist guesthouse in Southampton to a deconstructed 1950s ranch in Montauk. What all the featured architects and designers understand is that authenticity — and a clear sense of place — begets true character.

The Hamptons have a unique visual identity that stems both from its agrarian past and its more recent history as a mecca for artists. In a shingle-style home in the Springs, designer Joe D’Urso tapped into this legacy by hanging art produced exclusively by artists who have either lived or worked on the East End of Long Island, from an enamel composition by Jennifer Bartlett to bold paintings by Joan Mitchell and Ray Parker. Nearby, the New York City–based husband-and-wife architecture team Christoff:Finio redesigned a compound of historic barns that architect Tod Williams had acquired some 30 years ago from local farmers and moved to their current site. Today those structures, though transformed through a series of contemporary updates, continue to pay tribute to the area’s farming tradition.

Similarly, James Topping, who’s descended from original settlers of Long Island, transformed the interior of a circa-1847 barn on his family’s East Hampton property into a home for himself. Not every designer in Design in the Hamptons might have a client willing to accept the sacrifice of modern-day conveniences evinced here, but Topping was able to create a palpable sense of place through a minimally intrusive adaptive reuse. 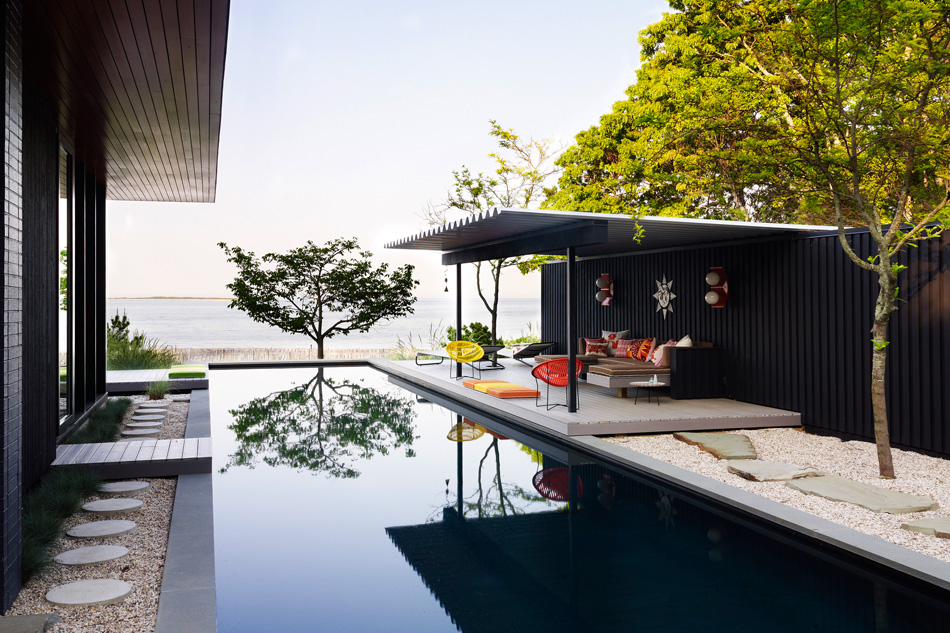 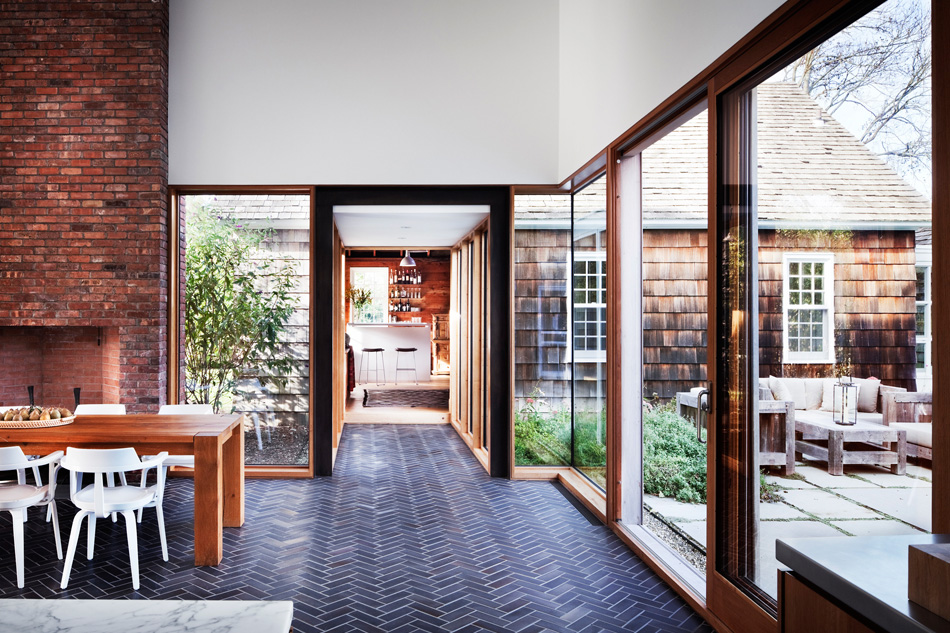 In this Christoff:Finio–designed home, a glass corridor connects the new spaces to a large former barn that now serves as the living room. Photo by Scott Frances 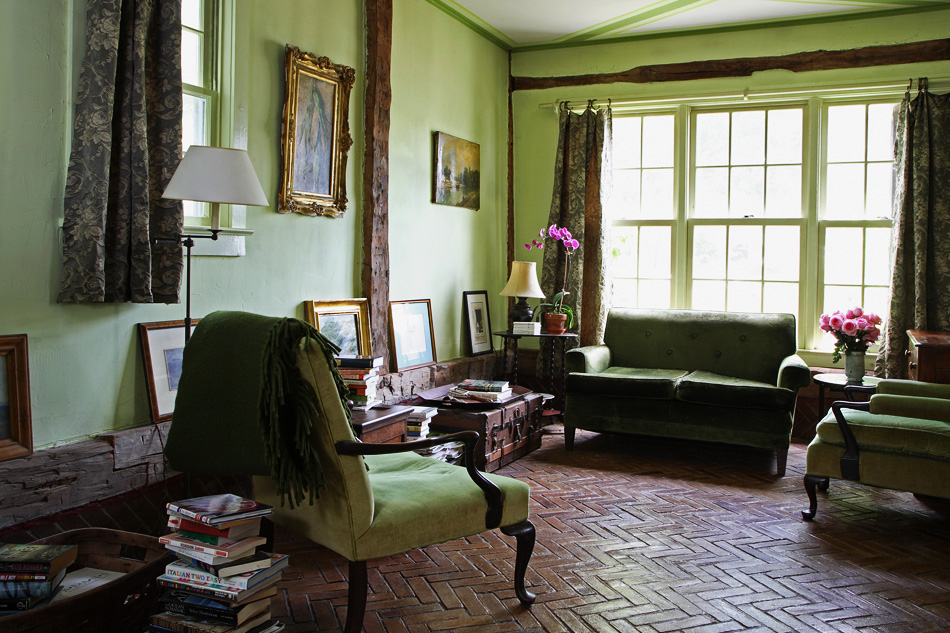 The spare-but-striking living room of James Topping’s home — a circa-1847 barn he renovated — features a rich green color scheme and bricks laid in a herringbone pattern. Photo by Don Freeman 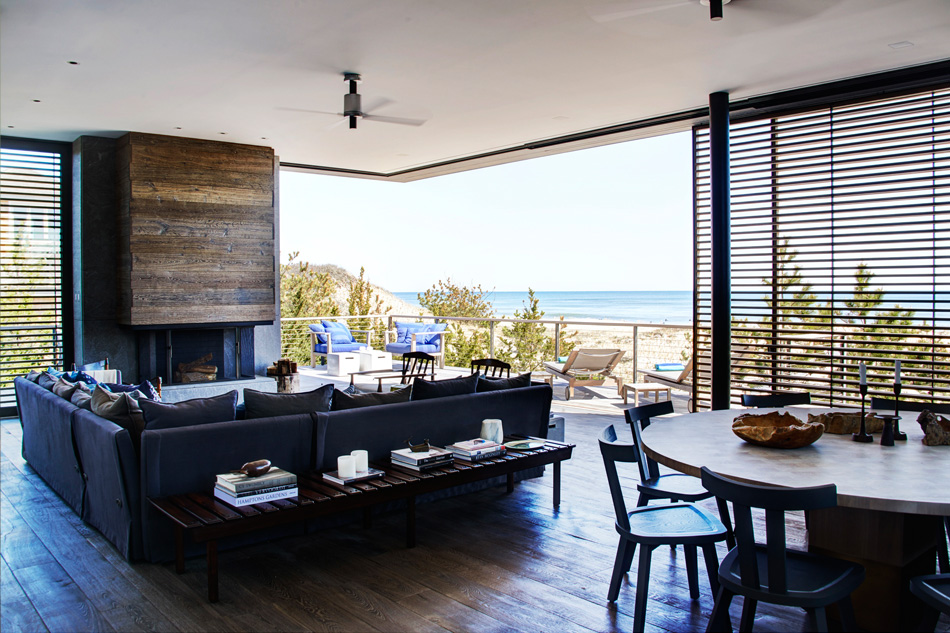 In the Amagansett home of designers George Yabu and Glenn Pushelberg, the living room has walls made of glass and slatted-cedar screens that can disappear completely when pushed to one side. Photo by Richard Powers 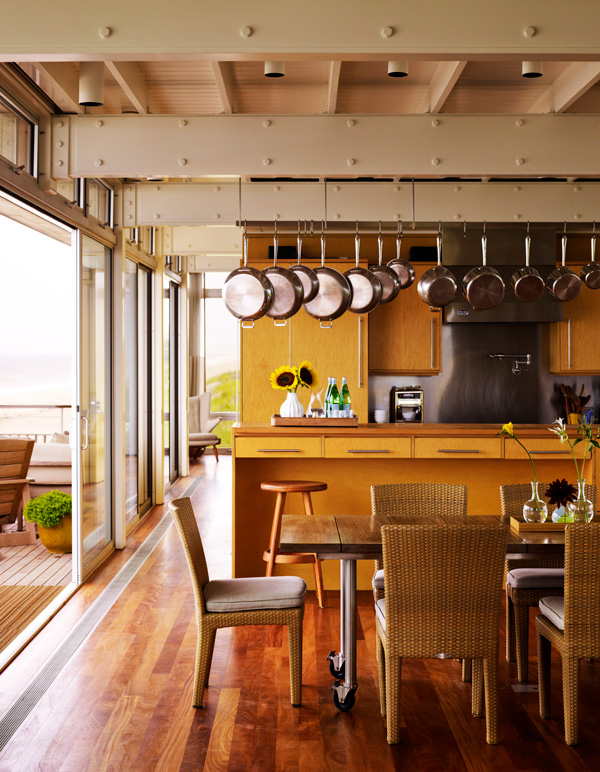 Interior designer Tom Flynn can adapt his dining arrangement to suit the weather and number of guests thanks to wheeled indoor/outdoor furniture. Photo by Eric Piasecki

In a like-minded nod to understatement (so in contrast to the prevailing local trend of bloated McMansions), the owners of a modest Shelter Island beach cottage purchased an adjacent lot and commissioned interior designer Philip Galanes and architect Michael Haverland to develop the expanded site. The two created an airy, light-filled addition made of steel, glass and stucco that feels at once modern and in harmony with the original structure. Design extroverts Jonathan Adler and Simon Doonan, meanwhile, took an atypically low-key approach to their newly constructed nearby home when they decided to paint the exterior a rich charcoal, so that the structure, like many they had seen on trips to Japan, would appear to blend into the surroundings. The result heightens one’s awareness of the natural landscape.

Many of the architects and designers included in the book have broken down the distinctions between indoors and outdoors. In the Amagansett residence that design duo George Yabu and Glenn Pushelberg created for themselves (working with Stelle Lomont Rouhani Architects, a Bridgehampton firm), for example, the home’s window walls and slatted shutters fully retract, opening up the living space to the beach. And to access the main living space, visitors climb a semi-enclosed stairwell that’s positioned to provide striking views of the dunes and ocean beyond. For another oceanside home, interior designer Tom Flynn (also working with Stelle Lomont Rouhani) designed indoor/outdoor tables that can be wheeled between the dining area and an adjacent terrace depending on the weather — or the number of guests invited to share a meal.

And before rebuilding his own Shelter Island home, New York architect Cary Tamarkin scrutinized the site’s ever-changing light and tidal schedules and even conducted a study of how the sound of the waves moved across the property in order to help him determine the house’s fenestration and its elevation above the sandy landscape.

What all the featured architects and designers understand is that authenticity — and a clear sense of place — begets true character. 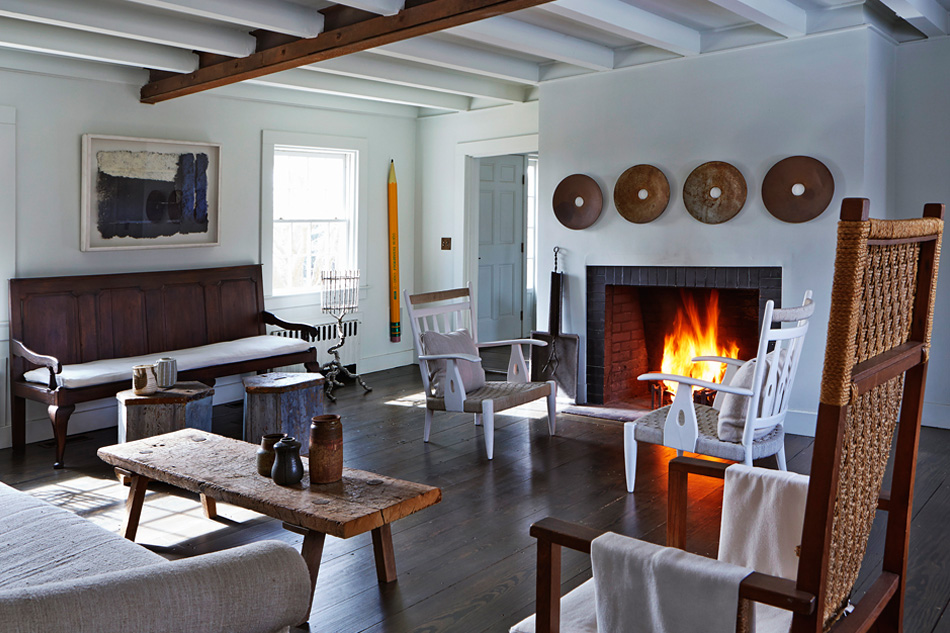 Of course, nothing creates a stronger sense of authenticity than a masterful mix of antiques and contemporary pieces. In the living room of his traditional Bridgehampton house, interior designer James Huniford placed a funky, oversized yellow pencil near an 18th-century wood-backed settee and antique industrial artifacts. In the master bedroom, a 19th-century Italian four-poster bed is positioned near a large chain from a boatyard in Washington State’s San Juan Islands. These unexpected pairings create a tension — albeit an aesthetically pleasing one — that jolts visitors into a state of attention and elicits curiosity. 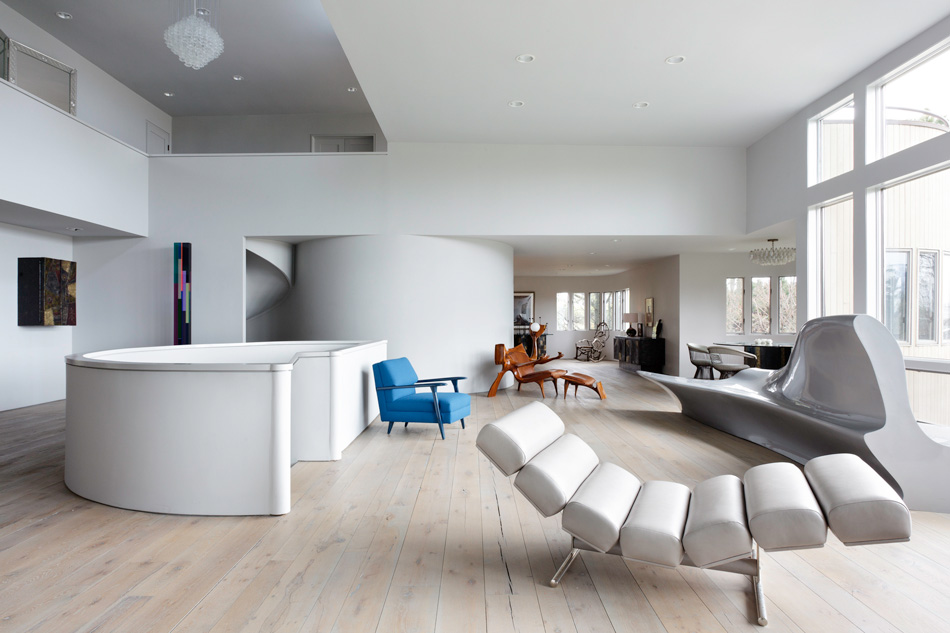 The furniture in design dealer Todd Merrill’s Southampton house — which includes pieces by Paul László, Gervan and Zaha Hadid — speaks to the landscape outside. Photo by Fran Parente

In the large living room of his Southampton home, design dealer Todd Merrill combined a Gervan segmented lounge chair, a Paul László armchair upholstered in brilliant blue, a sculptural wooden chair by Jack Rogers Hopkins and a monumental Zaha Hadid bench to create an unlikely harmony out of vastly different shapes, textures, materials and colors. Together, they call to mind the scale and colors of the beach landscape seen from his windows. And in the dining room of a traditional shingle-style home, Joe Nahem hung a Kara Walker collage over a Jorge Zalszupin jacaranda credenza and a Jeff Zimmerman custom-made calla lily lamp sculpture over a dining table by Sérgio Rodrigues, blending periods and histories in a way that spawns new, compound narratives.

Each home in Design in the Hamptons illustrates that nothing is more memorable than an aesthetic narrative told in a confident voice, with a strong commitment to originality and authenticity.