Their “Minimalish” Interiors Reveal an Eye for Detail 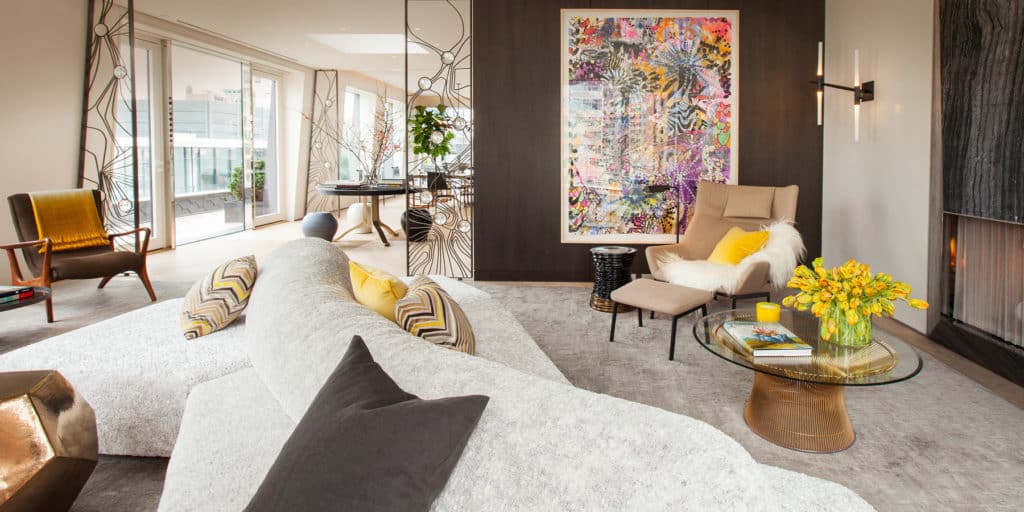 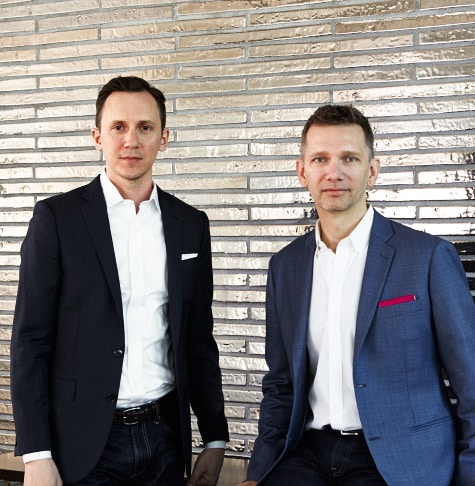 I sometimes use the hashtag ‘minimalish,’ ” says Daniel Heighes Wismer. He is walking through a Soho penthouse he created with Greg Dufner, his partner since 1999 in the boutique design firm Dufner Heighes. Minimalish, because no one could call features like the mirror-polished stainless-steel range hood — a faceted sculpture at the center of the penthouse kitchen — “minimalist.” Yet the hood, the kind of tour de force for which Dufner and Wismer have become known, is surrounded by walls that are alternately white Venetian plaster and dark oak. The goal, they explain, is to balance special moments against settings of elegant restraint.

Virtually every project Dufner Heighes accepts involves architecture, interior design and decorating, a combination that enables them to reconfigure spaces (moving floors, walls and ceilings), finish those spaces with carefully chosen (and sometimes quite remarkable) materials and then add furniture and fabrics. They’re experts in all three areas. Ask Dufner who made the tiny throw pillow on one of the sofas, and he immediately answers, “Kelly Wearstler for Lee Jofa — a printed linen called Channels.” Ask him about the most arcane aspects of construction or building codes, and the answer is just as detailed. The same is true of Wismer. The two men are alter egos; after working together for nearly 20 years, they say they can communicate in sentence fragments.

The two men are alter egos; after working together for nearly 20 years, they say they can communicate in sentence fragments. 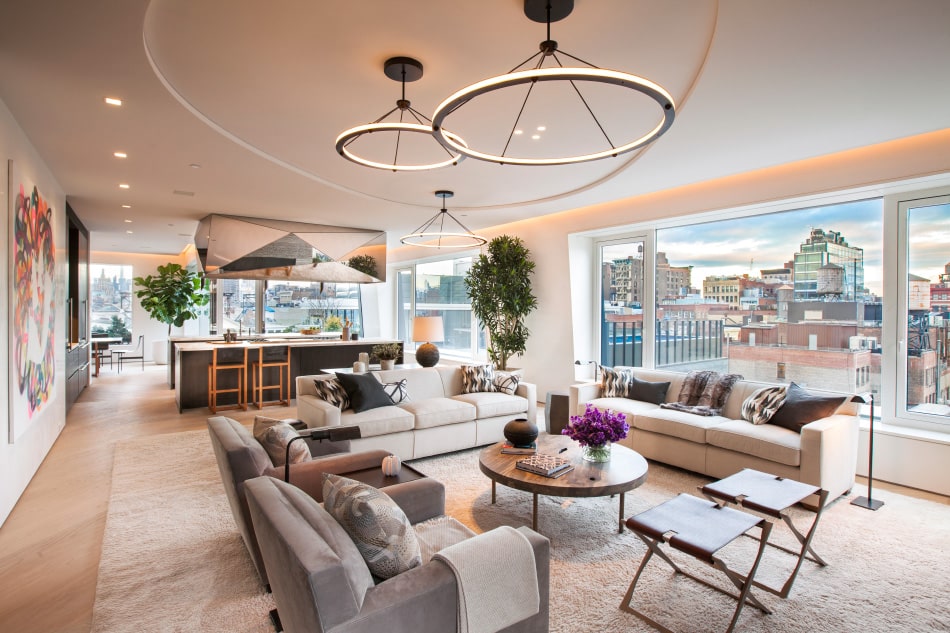 In the Soho penthouse’s family room, Paul Loebach pendants hang above a custom sofa and club chairs, plus a BDDW coffee table and stools from Holly Hunt. Behind, the designers turned the hood over the kitchen’s stove into a sculptural element of faceted mirror-polished stainless steel. Photo by John Ellis 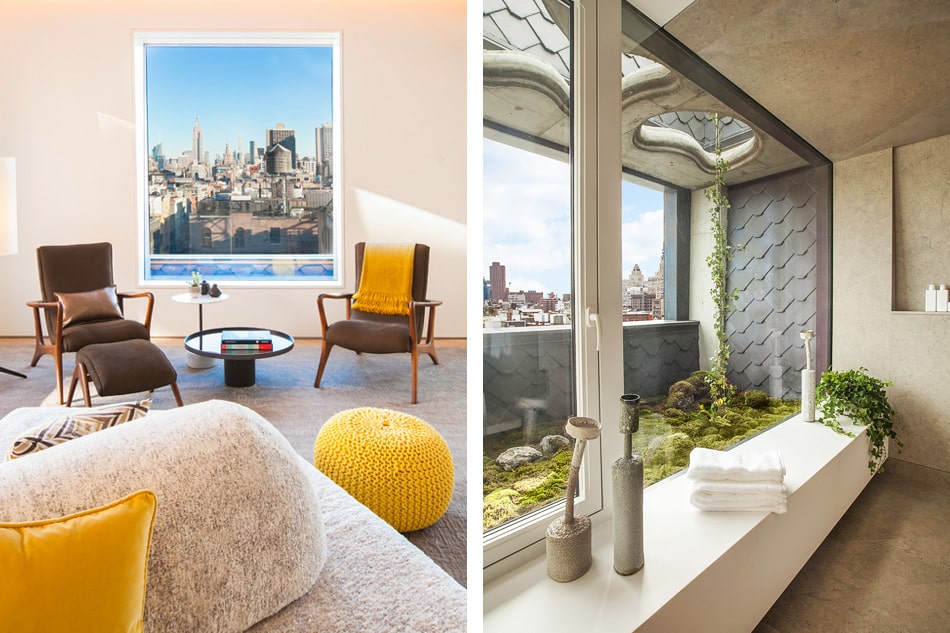 Left: Another view of the penthouse’s living room shows a pair of Vladimir Kagan chairs flanking a window that affords unobstructed views of quintessential Manhattan skyscrapers, including the Empire State Building. Right: Recessing the glass wall of the master bathroom not only created privacy but also allowed the designers to install a living moss garden that is overlooked by the shower bench. Photos by John Ellis 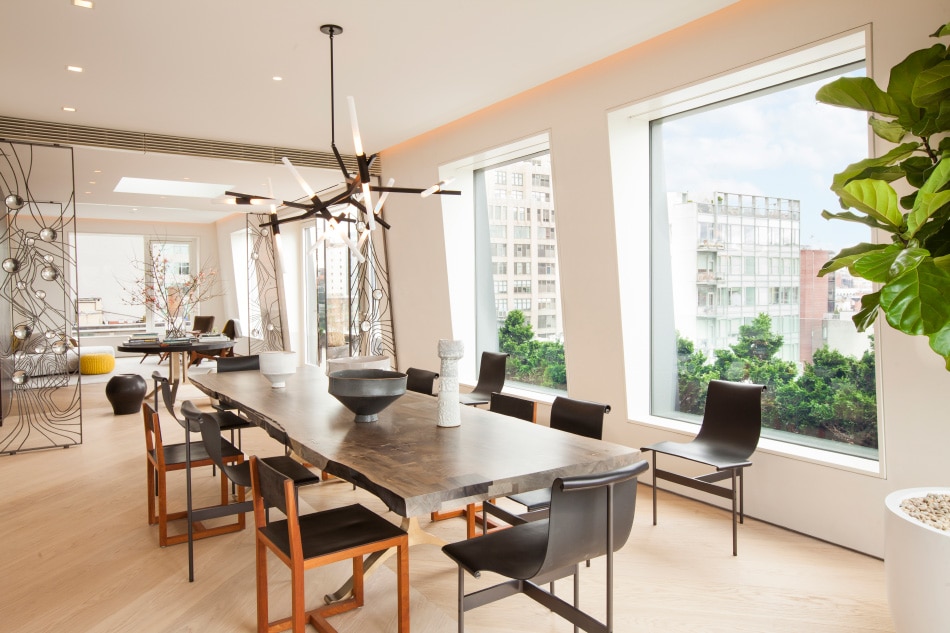 In the dining room, an Adelman pendant hangs over a table and chairs by BDDW. Photo by John Ellis 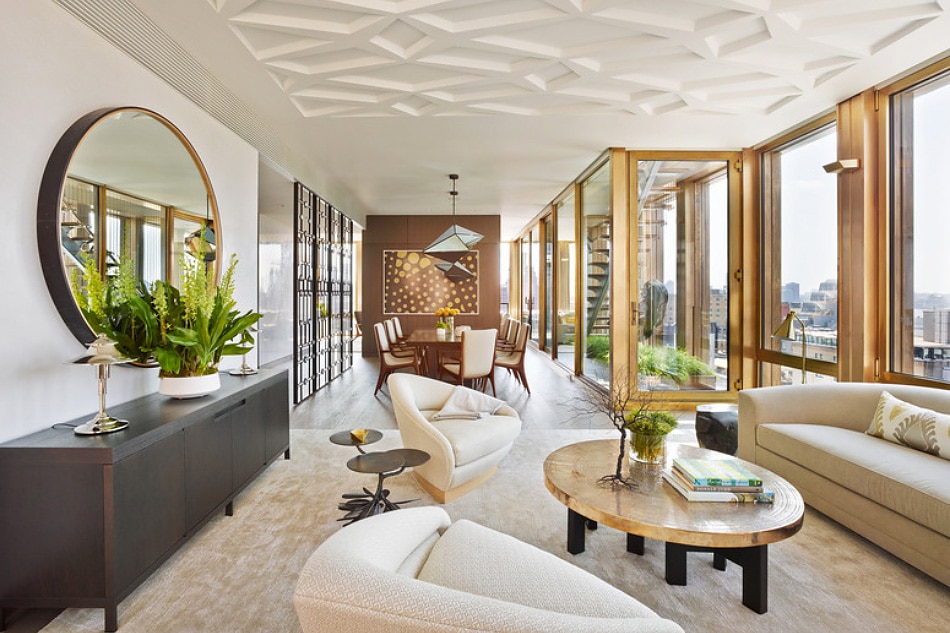 Dufner and Wismer outfitted the long, glass-walled living and dining area of another Manhattan penthouse, this one in the Meatpacking District, with an Ado Chale coffee table, a Christian Liaigre credenza, a Holly Hunt dining table, dining chairs by Kagan and Bec Brittian pendants. Photo by Nikolas Koenig 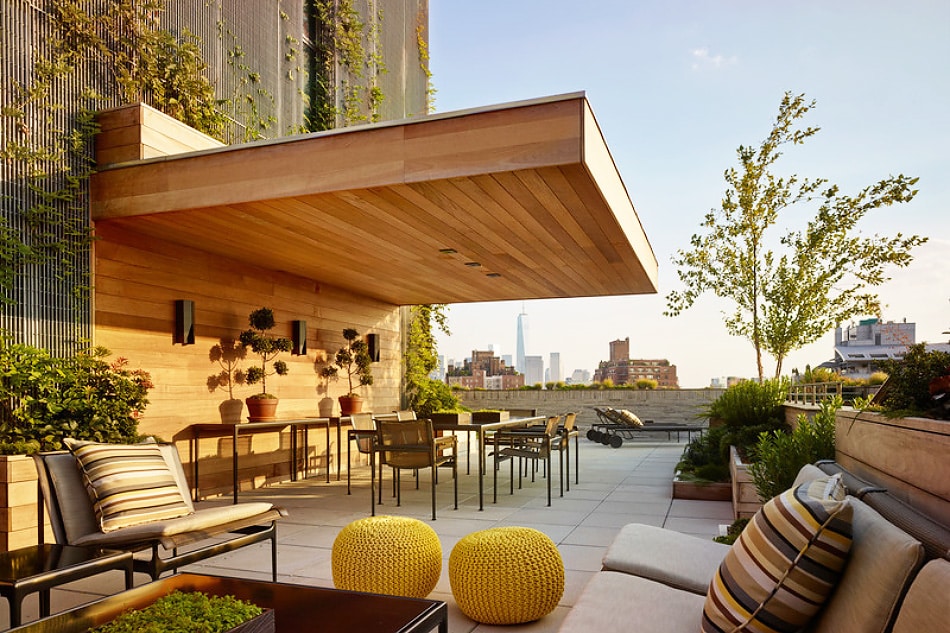 The roof terrace of the Meatpacking District penthouse features furniture by Richard Schultz manufactured by Knoll. Photo by Nikolas Koenig 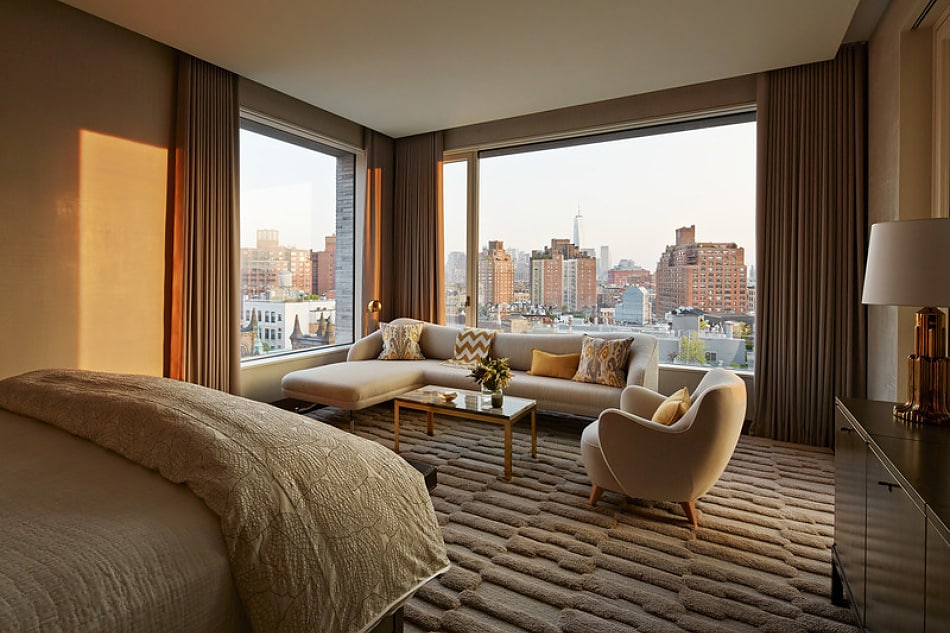 A BDDW bed, sofa and side chair by Kagan and a Roman Thomas coffee table and cabinet complete the furnishings in the Meatpacking District master bedroom. Photo by Nikolas Koenig 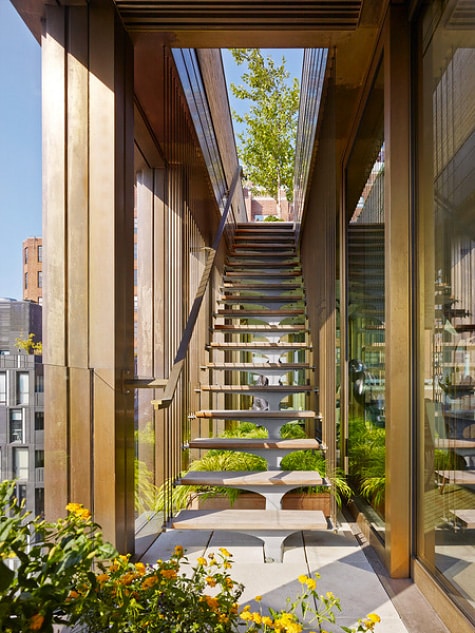 The designers pulled back the exterior wall of the Meatpacking District penthouse to create an open-air loggia. A mahogany-tread stairway that connects the terrace to the roof deck passes through this reclaimed alfresco space. Photo by Nikolas Koenig

That may sometimes leave their employees confused, Dufner admits, but their design decisions come through loud and clear. At the Soho penthouse, Dufner and Wismer made significant changes to the floor plan, turning three bedrooms into two and pulling one of the exterior walls back almost eight feet to create a large terrace with views of the Manhattan skyline. (In both cases, they were counteracting the developer’s compulsion to maximize the number of bedrooms and the amount of enclosed space.) Those changes, some of which required approval from the city’s Landmarks Preservation Commission, were just the beginning. The designers also added skylights; moved a stairway; commissioned steel-and-glass room dividers from French artist Christophe Côme; and created reveals where walls meet floors, ceilings and windows. They also made each of the four fireplaces completely different. In the living room, for instance, a set of gas logs nestles in a cantilevered, faceted firebox of honed Kenya Black marble, while in the den, a row of jets fills a wide rectangular cutout in a flush stone wall.

No surface escapes careful attention. For the floors of clear white oak, the designers came up with a chevron pattern based on the length of the available lumber. “There isn’t a single seam that we didn’t intend,” Wismer says matter-of-factly. They used the same angled pattern in the floor of the guest bathroom (this time in three varieties of stone) and even on the terraces (with custom concrete pavers). But the whole comes off not as obsessive but as merely thoughtful. Indeed, both partners seem remarkably laid-back, which explains another aspect of their practice.

“We always become friends with our clients,” says Dufner. “Their trust is essential for the projects to succeed.”

The proof is in the penthouse — the 10th project they’ve completed for the same client. Right now, they’re also designing a house for him in south Florida — in what they call a sophisticated update of MiMo (Miami Modern) style. As in all their ground-up houses, they are working on the interior and exterior at the same time. “While we’re thinking about the building envelope, we’re conscious of how furniture is going to lay out in the room,” says Wismer. Adds Dufner, “Each informs the other.”

Even when they are brought in to do interiors in an existing building, they use the exterior as a source of ideas. The developer of a condo building in Manhattan’s Meatpacking District sheathed it in light gray, individually handcrafted bricks from Denmark. Outfitting the penthouse for a longtime client, Dufner and Wismer decided to extend the brickwork into the apartment — and to go the developer one better: They sent their bricks from Denmark to Sweden, where they were given a glamorous coating of platinum before being installed on a wall of the kitchen/breakfast room. Because the building’s window frames are bronze-colored Muntz metal, they used bronze in the apartment, on mill-finished column enclosures, custom door handles from Rocky Mountain Hardware and some of the furniture and lighting. 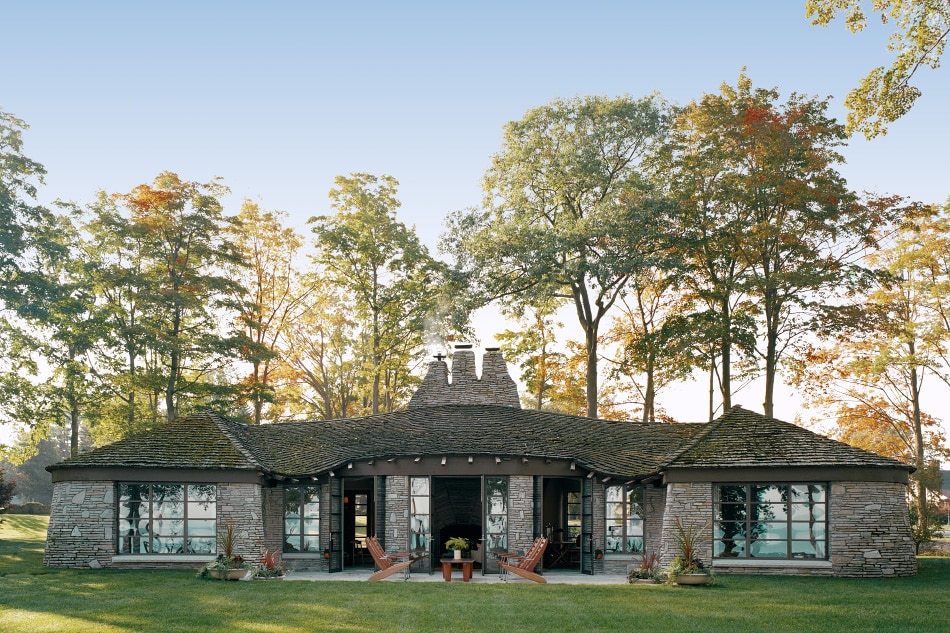 “We restored the exterior of this house so precisely that after completion, the neighbors asked if we did any work at all,” the designers say of this rubble-walled northern Michigan residence from the 1940s, which is known as a Hobbit house. Photo by Simon Watson 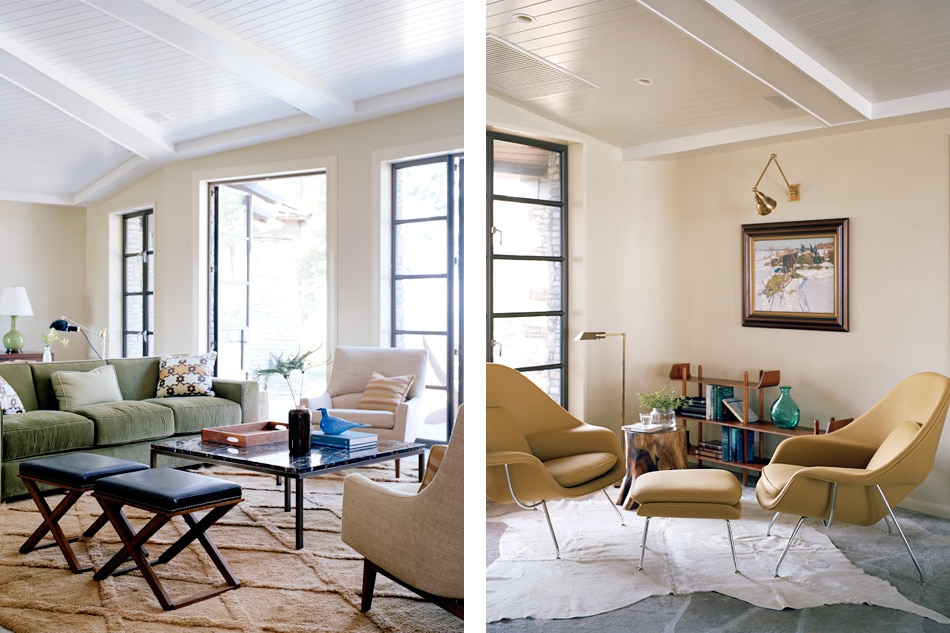 Left: The Hobbit house’s living room centers on a custom coffee table designed by Dufner Heighes. The club chair is by Jens Risom, and the green ceramic lamp by Christopher Spitzmiller. Right: In a reading area, an Eero Saarinen ottoman and chairs sit in front of a Gouda den Boer bookshelf from Glo. Photos by Simon Watson 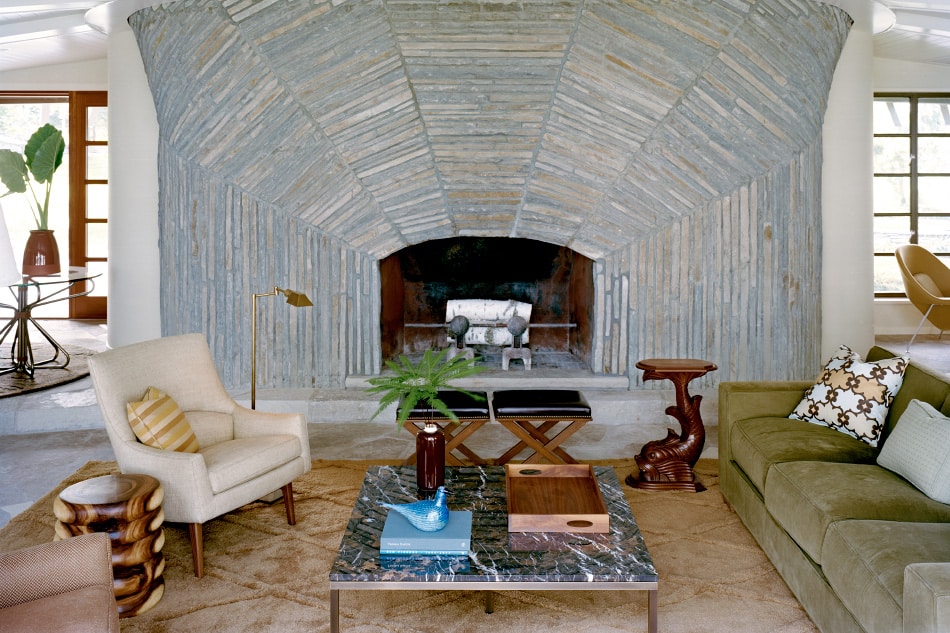 The designers restored the Hobbit house’s original sunburst-pattern stone fireplace to ensure it would remain the focal point of the living room. Photo by Simon Watson 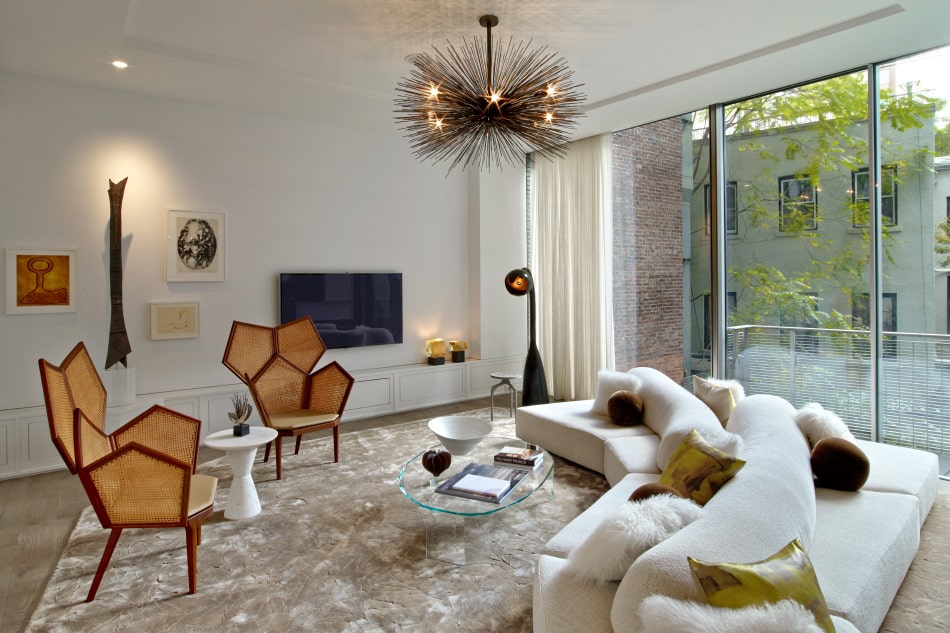 In the living room of a Bond Street apartment, in New York’s Noho, another one of Binfare’s On the Rocks sectional sofas gently curves toward a pair of Lui chairs by Fratelli Boffi. Photo by Eric Laignel 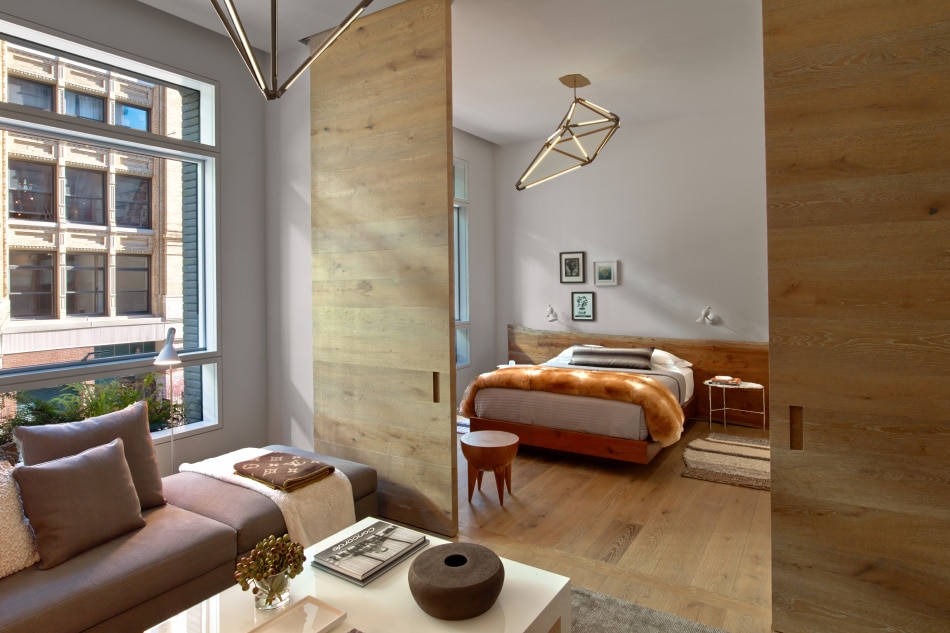 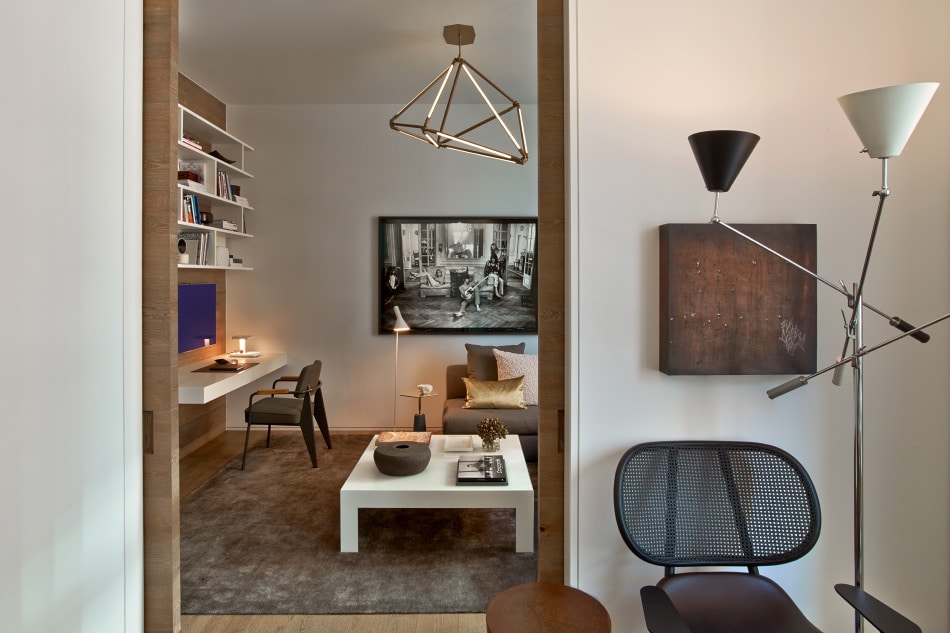 The guest suite’s desk chair is by Jean Prouvé, sourced through Vitra. Photo by Eric Laignel 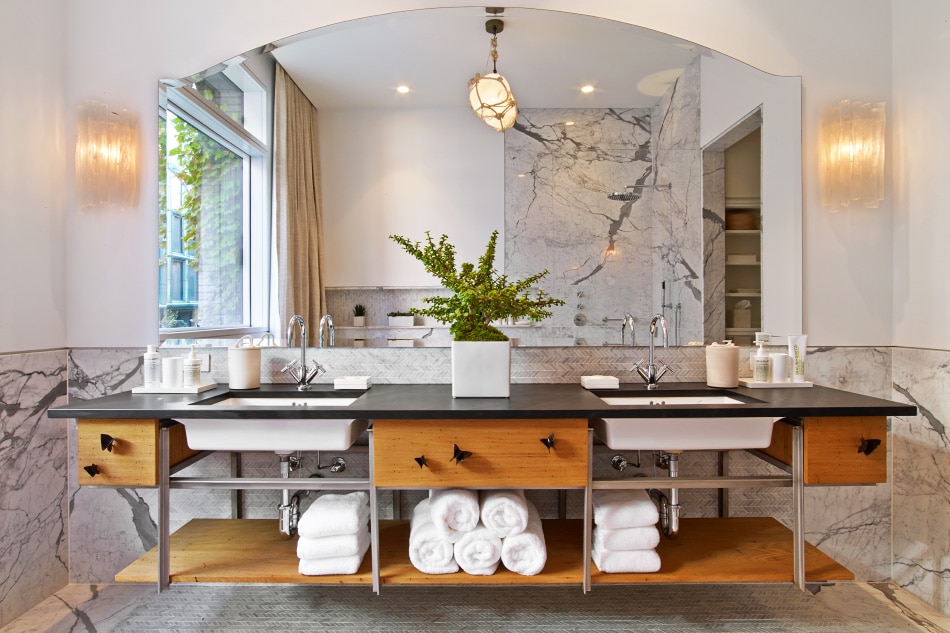 A house in northern Michigan also gave them a strong framework. It is one in a series of local Hobbit houses, rustic dwellings from the 1940s with rubble stone walls supporting low, curved roofs. Dufner and Wismer had the good sense to maintain the building’s quirkiness. On the outside, the only noticeable change they made was to the windows. (They even retained the moss on the wood-shingled roof.) Inside, they had to lower the floors, since the original ceiling height was only seven and a half feet. They preserved the focal point of the house, however — a vast sunburst-patterned stone fireplace — and made the new floors out of cool gray limestone to complement it. Tables with kitschy fish-shaped bases extend the rural mien. But they also brought in a mix of furniture that includes a Jean-Michel Frank sofa, easy chairs by Jens Risom and a metal-based marble coffee table of their own design.

The Hobbit house is something of an outlier, in both location and style, for Dufner and Wismer, who met through a mutual friend in the late 1990s in Manhattan, when both were architecture students: Dufner downtown at Cooper Union and Wismer uptown at Columbia. (Although both are from Michigan, they didn’t know each other there.) Today, many of their projects are within walking distance of their Lower East Side office. In one, an apartment on Bond Street, a single large room had to contain the kitchen as well as dining, living and entertainment areas. The designers made the layout work by using furniture and accessories architecturally: A huge angular sofa with seats facing in two directions became a room divider. And they selected Lui chairs by Fratelli Boffi whose oversized caned backs are practically partitions. The various furniture groupings sit on a large custom-made rug from Tai Ping, a polyhedron that angles around the fireplace. (The designers made a full-sized template to get exactly the shape they wanted.) Overhead, they anchored the space with two large Jean de Merry starburst fixtures.

Recently, Dufner and Wismer completed their most public project to date, the renovation of the James Hotel in Chicago. Thinking residentially, they divided the lobby into what they envisioned as a foyer (the reception area), a dining room (the bar) and a living room (the lounge). The floors are a warm white terrazzo; the walls are rift-cut white-oak wainscoting with metal trim. The firebox is cold-rolled steel, and the concierge desk has a live-edge walnut top. “It’s very warm, with a nice balance of color and texture and a few special moments,” says Dufner. 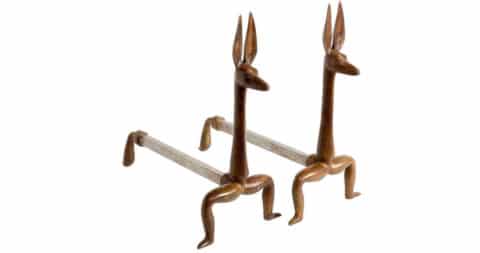 “We always include a few whimsical objects in our projects — like these gazelle andirons. They add a layer of humor, evoke a story and personalize a space.” 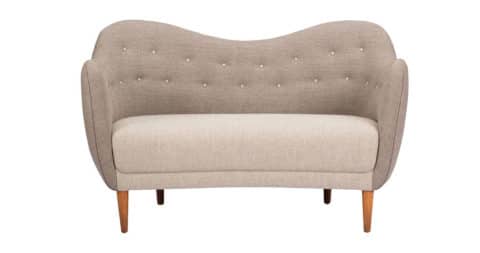 “We love the Danish masters from the middle of the twentieth century. They were experts of proportion and exquisite craftsman, and they were obsessed with detailing. The scale of the furniture from this period is perfect for spaces small or large.” 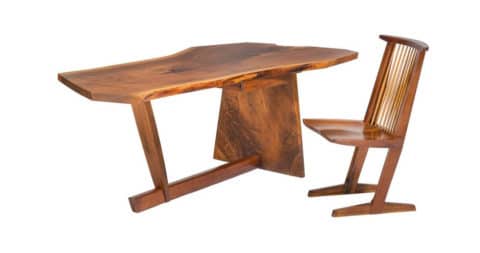 “We often use organic live-edge walnut pieces by George Nakashima or his daughter, Mira Nakashima, to complement and soften more geometric or rectilinear architecture. They add a layer of detail and interest that is still quintessentially modern.” 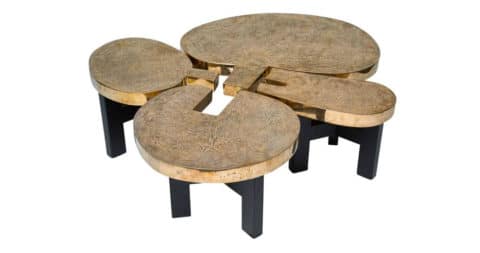 “For our ‘minimalish’ interiors, we like to seek out artist-made pieces, like these cast-bronze tables by Ado Chale. Our clients appreciate the provenance and heirloom quality. We even once had to commission a new one from Chale when our client didn’t move fast enough to buy one sold on 1stdibs!” 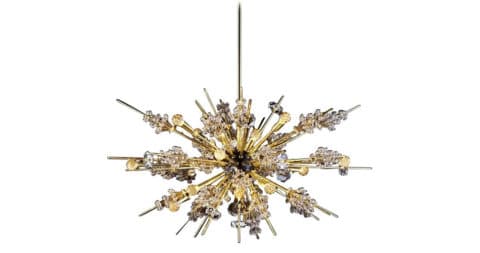 “Based on the twelve original starburst chandeliers at New York’s Metropolitan Opera, this Lobmeyr pendant adds a sense of Manhattan glamour and sparkle to any space. It’s jewelry for the ceiling.” 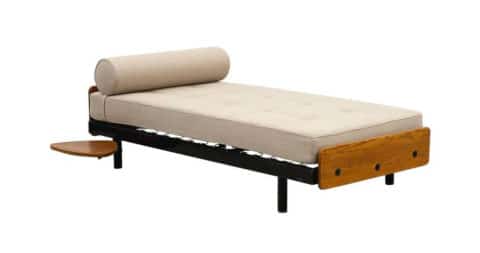 “This Prouvé daybed is sophisticated without being stuffy. Prouvé skillfully used industrial technology to fabricate pieces like this without losing his rich aesthetic sensibility.” 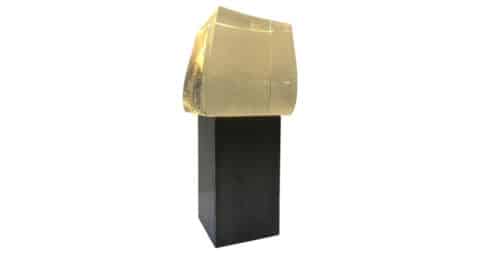 “We love Christophe’s use of glass in combination with metal to create truly one-of-a-kind pieces for our projects. His Loukoum light sculptures are simultaneously jewel-like and minimal.”