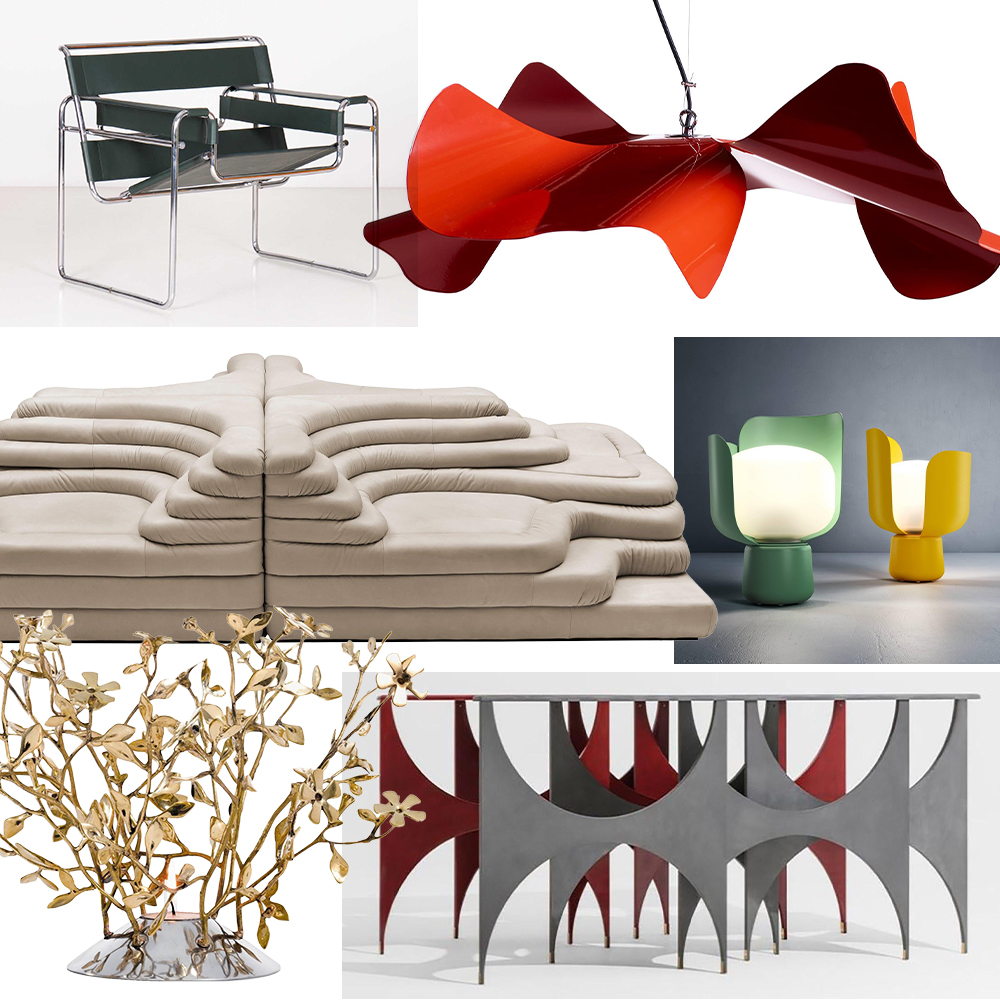 Owner Patrizio Chiarparini offers thousands of pieces from his native Italy and elsewhere across Europe.

February 6, 2022“Here we are,” says Patrizio Chiarparini, opening the door to his light-filled gallery space in an industrial building in Brooklyn. Chiarparini, who was born in Asolo, a small city north of Venice in the foothills of the Alps, and lived in London as a young man, speaks English with an accent as melodious as his name.

Tall, handsome and dressed in black, he makes a powerful impression. So does the room, a rectangle as high as it is wide, entirely white except for the dozen or so items he has chosen to display.

And what items! They include a lacquered desk by the great Carlo Scarpa, whom Chiarparini has idolized since childhood. (The Brion Cemetery, Scarpa’s masterwork, is close to where Chiarparini grew up.) He acquired the desk, produced in Bologna by Simon Gavina, to anchor his new place. “I don’t want to sell it, so I haven’t given it a price,” he says.

Chiarparini, 43, inaugurated the space in January 2021, but he didn’t need to. His gallery — Duplex — has been thriving on the Internet, showing, he says, some 5,000 pieces, mostly from Italy and many of them customized by him.

This digital-to-physical trajectory makes his business something of a rarity. “Most galleries start offline and go online,” he says. “I did the opposite.”

The new location, in Brooklyn’s Williamsburg neighborhood, is not quite a showroom, given how few of his pieces it can hold. Chiarparini uses it as a kind of 3-D mood board.

“I wanted a space where Duplex could express itself,” he explains. Indeed, even the music playing in the background is Chiarparini — recordings he made a few years ago in California, covering Donovan, the Doors, Elvis Presley and the Rolling Stones. After furniture, his great love, he says, is music.

But customers do come, by appointment. “I find that there’s a thirst to discover new places,” he notes. “And we want to be a more personal business.”

Chiarparini never expected to sell furniture. After studying global enterprise development and fronting a band (“I was a rock ’n’ roll microeconomist”), he went to work in fashion distribution in London. Then, in 2004, he met a woman from New York. “I saw her for five days, then I moved here.” He had never been to the U.S., he recounts. “I had also never been in love like that.”

In New York, he landed a job with the high-end furniture manufacturer Giorgetti. “I represented Giorgetti for ten years, which meant I got to work with all the best dealers in North America,” he says. “I also have a very strong background in logistics — that’s not a small detail.”

When founder Carlo Giorgetti sold the company, in 2015, Chiarparini says, “it was time for me to find an independent path.” That path led him to launch Duplex the same year. He looked for firms that weren’t happy with their representation in North America, beginning with de Sede and cc-tapis. Then, he started working with smaller companies, many of which had far more pieces than could ever be shown in a brick-and-mortar store.

“My idea was to give exposure to the immense catalogues of these companies,” he says. Among the pieces he’s made available are Stephane Lebrun’s glass and walnut Optimum chests for Dessie, OSCAR MASCHERA’s Caballito bench and Murano glass Soda tables from Miniforms.

“The U.S. is the country that invented marketing, but a lot of companies in Italy still struggle with it,” Chiarparini says. He later took on Venini, Foscarini, Kartell and Moooi, each of which now has its own 1stDibs storefront. More recently, he began representing vintage furniture dealers in and around Bologna. “I partner with galleries that haven’t had an online presence,” he explains. “When I’m in Italy, I look at as many pieces as I can. The dealers hold the pieces for us, and we give them exposure.”

Finally, he turned to customization, choosing colors or fabrics or accessories that make each item special — “something only Duplex can sell.”

One great benefit of his business is that he can run it from wherever he happens to be. “I didn’t want to have to be anywhere at any particular time,” he says. “That’s the beauty of the Internet.”

Here, Introspective speaks with Chiarparini about furniture as art, the possibilities of customization and Duplex’s bold new collection.

Who buys from Duplex?

Most of our regular customers are interior designers — not the giant firms but individual designers. Sometimes inexpensive items, like the [Faye Toogood] Roly-Poly, sell to the end users.

You’ve sold a lot of Roly-Polys?

Hundreds and hundreds and hundreds. We are the master of the Roly-Poly. It’s a piece of art, it’s got nothing to do with furniture. People who ask if it’s comfortable usually don’t buy it. It’s for people who like the idea of buying an accessible work of art. Collectors love Faye Toogood, and this is no doubt the most famous piece she’s ever done.

But you wanted your own version?

It was our first customization. On a trip to Italy, in an area called Casentino, I saw this very interesting wool fabric, which monks wore in the fourteenth century, and I could see how interesting it would be atop the Roly-Poly — a six-hundred-year-old fabric on a six-year-old chair.

What’s your favorite piece in the new space?

The Catilina chair, designed in 1957 by Luigi Caccia Dominioni. This one is from 1958. You often see the smaller dining versions — those are still produced. But this is the larger version, the throne. I bought it for the space, and then I priced it to make sure that I never have to sell it.

What trends are you seeing in the marketplace?

There is a lot of interest in pieces that look like furniture but are not necessarily bought for their function. They are art pieces that elevate the look and feel of a room.

And the other trend is customization. It’s very important for a dealer like Duplex to provide interior designers with things that aren’t available everywhere. The goal of my gallery is to inspire interior designers. That’s why the rugs are gold, why the sofa is gold. People like to see new and exciting colors.

Tell us about the rugs and the sofa.

That’s our Gold Is Bold initiative. We took the Bliss rug collection — designed by Mae Engelgeer, a Dutch textile engineer, and hand knotted in Nepal by cc-tapis — and gave it rich gold tones.

The rugs go with the sofa designed by Jonas Wagell for Tacchini, upholstered in a gold Kvadrat/Raf Simons mohair. The world doesn’t need another sofa in a white bouclé. People want things that make some kind of mark.

The marketing photos feature Brooklyn drag queen Junior Mintt. How did that come about?

I wanted to avoid the typical high-end furniture ad. I wanted to do something more relevant, a real-life New York situation. So we got Junior Mintt to interact with the pieces in the Duplex space for the photographer Silas Vassar. The idea of the shots is that she’s just hanging around, waiting for a show to begin. 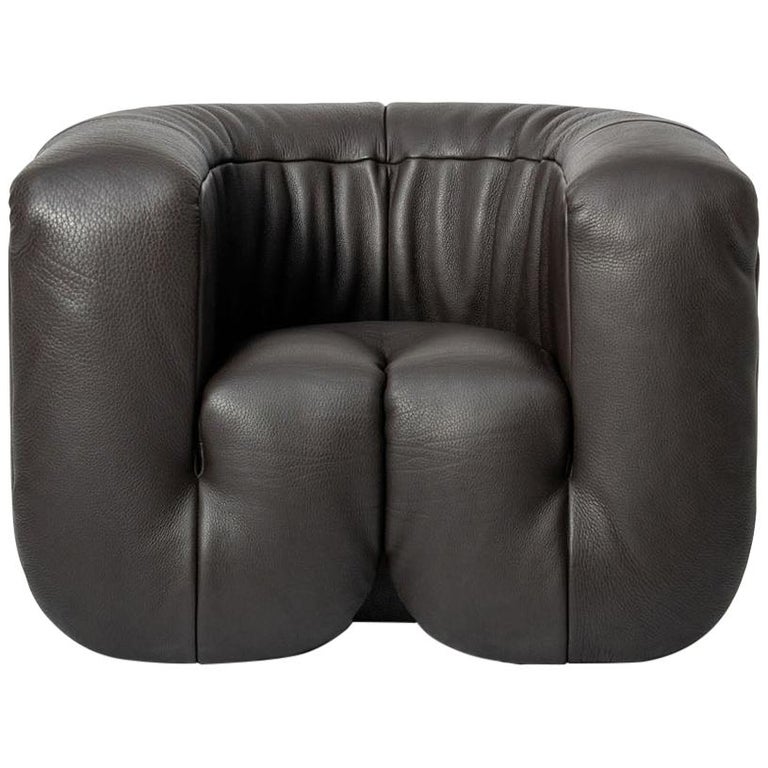 “I love the DS-707. It’s a brilliant brutalist interpretation of de Sede’s DNA by Philippe Malouin.” 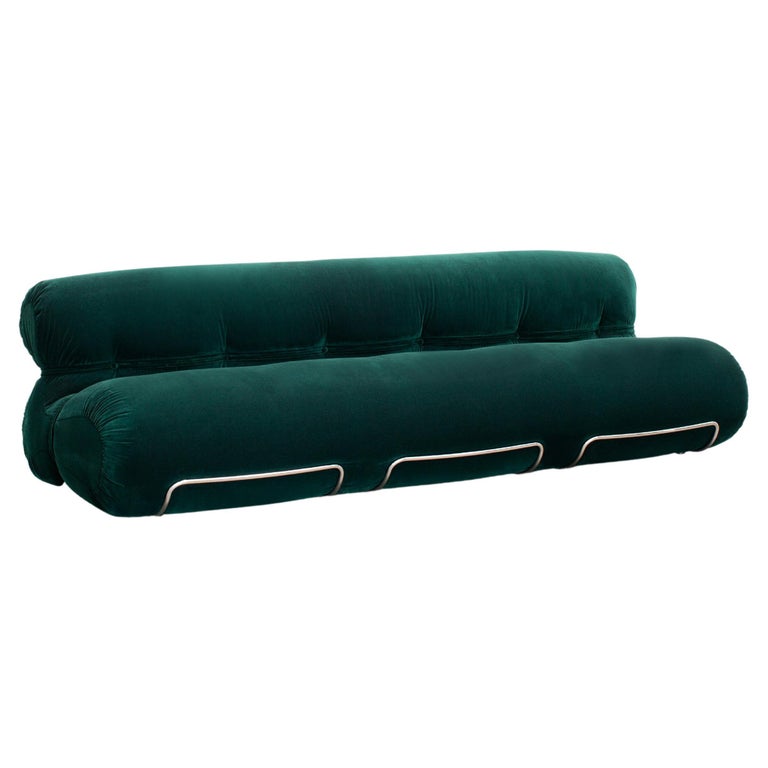 “I’m a big fan of nineteen-seventies reeditions, like this series by Gastone Rinaldi, manufactured by Tacchini.” 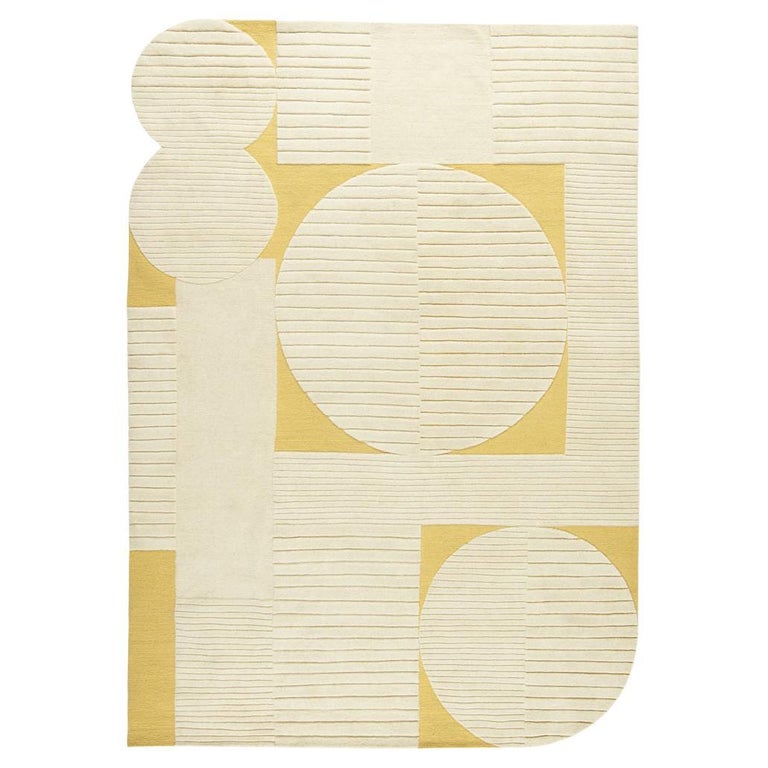 “This exquisite collaboration between cc-tapis and Atelier de Troupe is inspired by The Passenger, by Antonioni.” 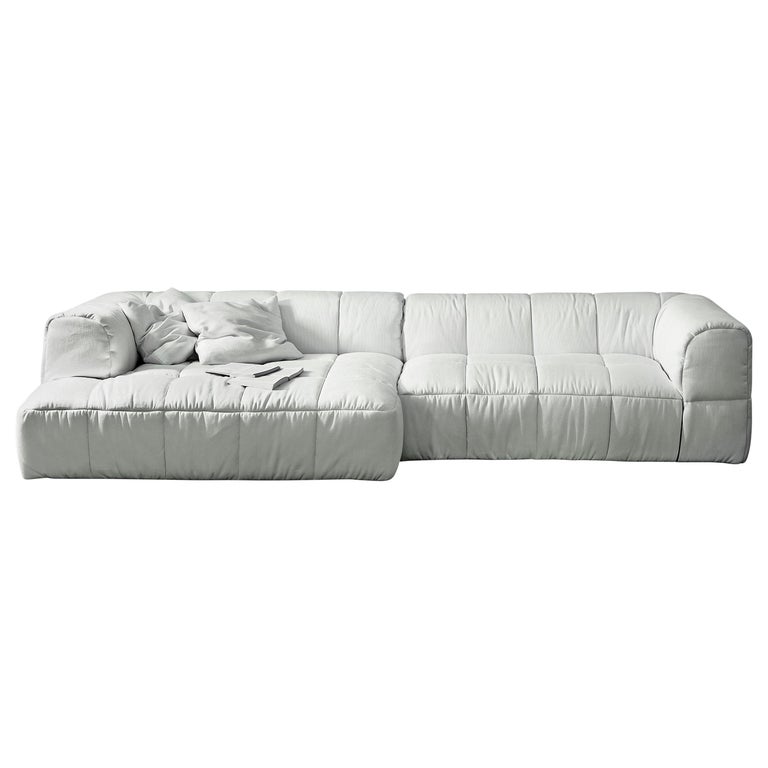 “Cini Boeri was an exceptional woman. She was one of the first female Italian designers to rise to prominence after World War II.” 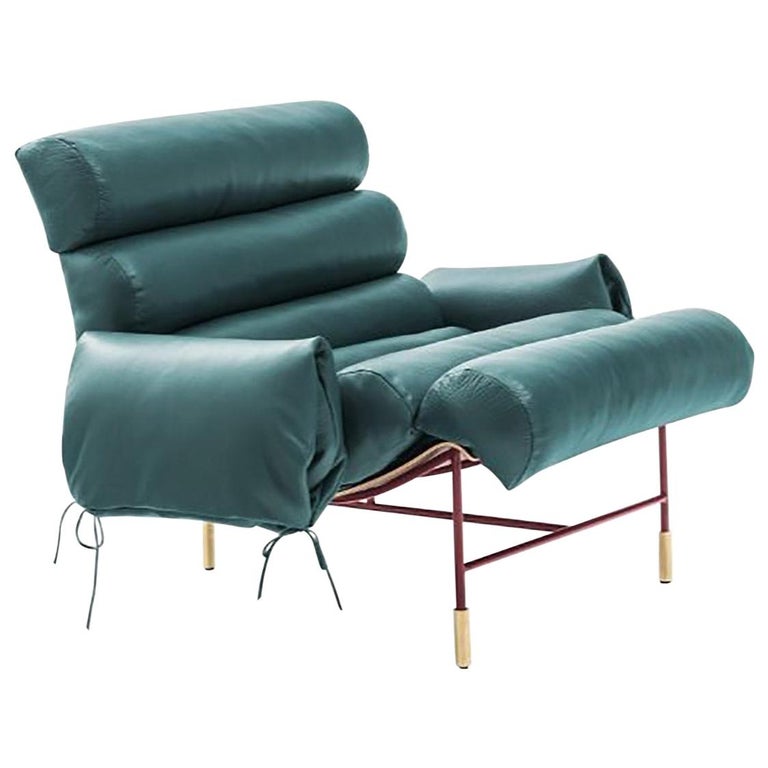 “Hannes Peer is one of my favorite designers. Love his collaboration with SEM Milano and his sensibility in reinterpreting styles and the use of materials.” 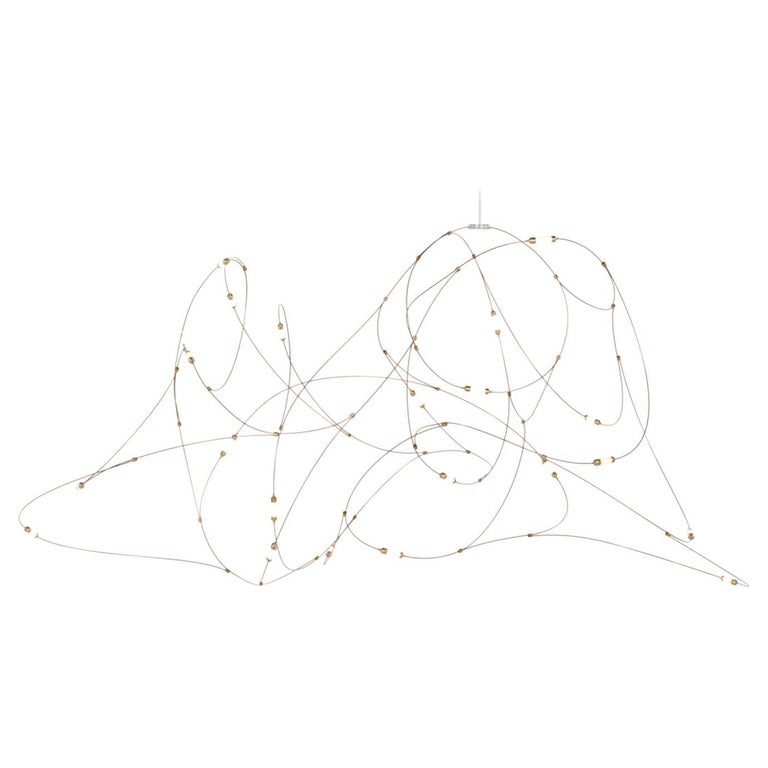 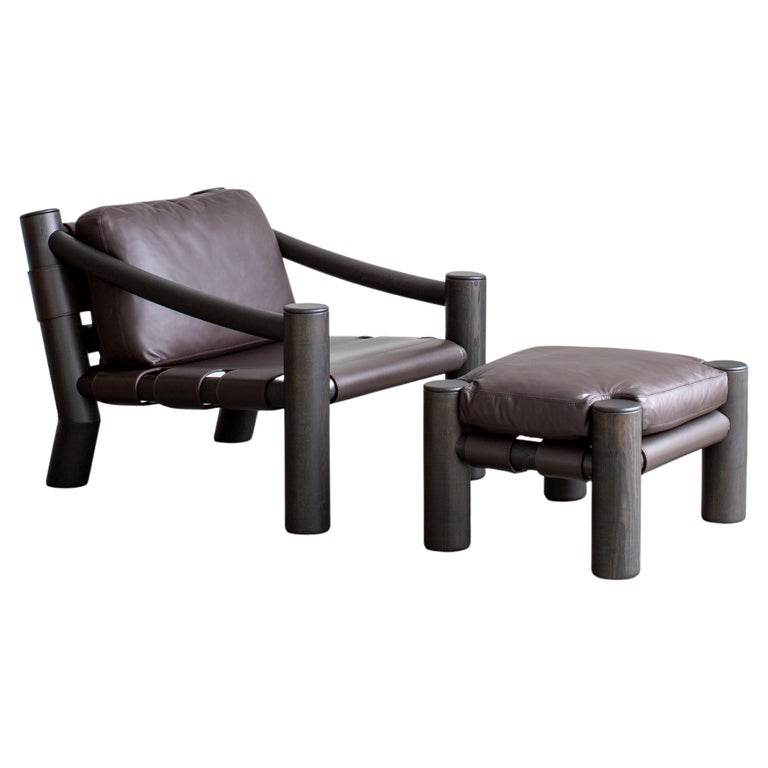 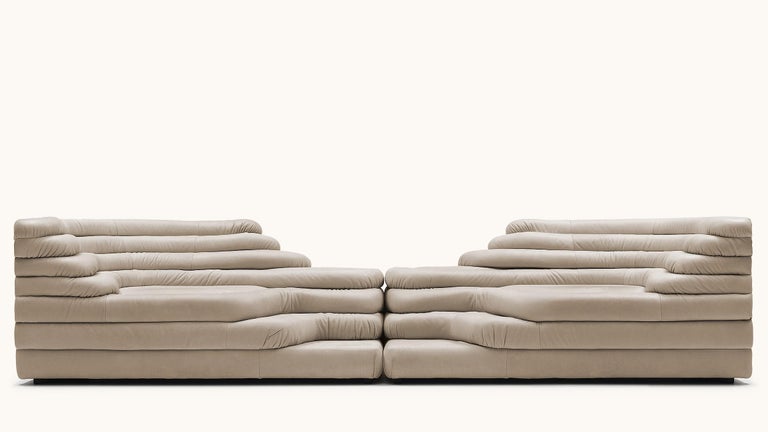 “This is one of my personal favorites, the only production furniture piece by design master Ubald Klug.”