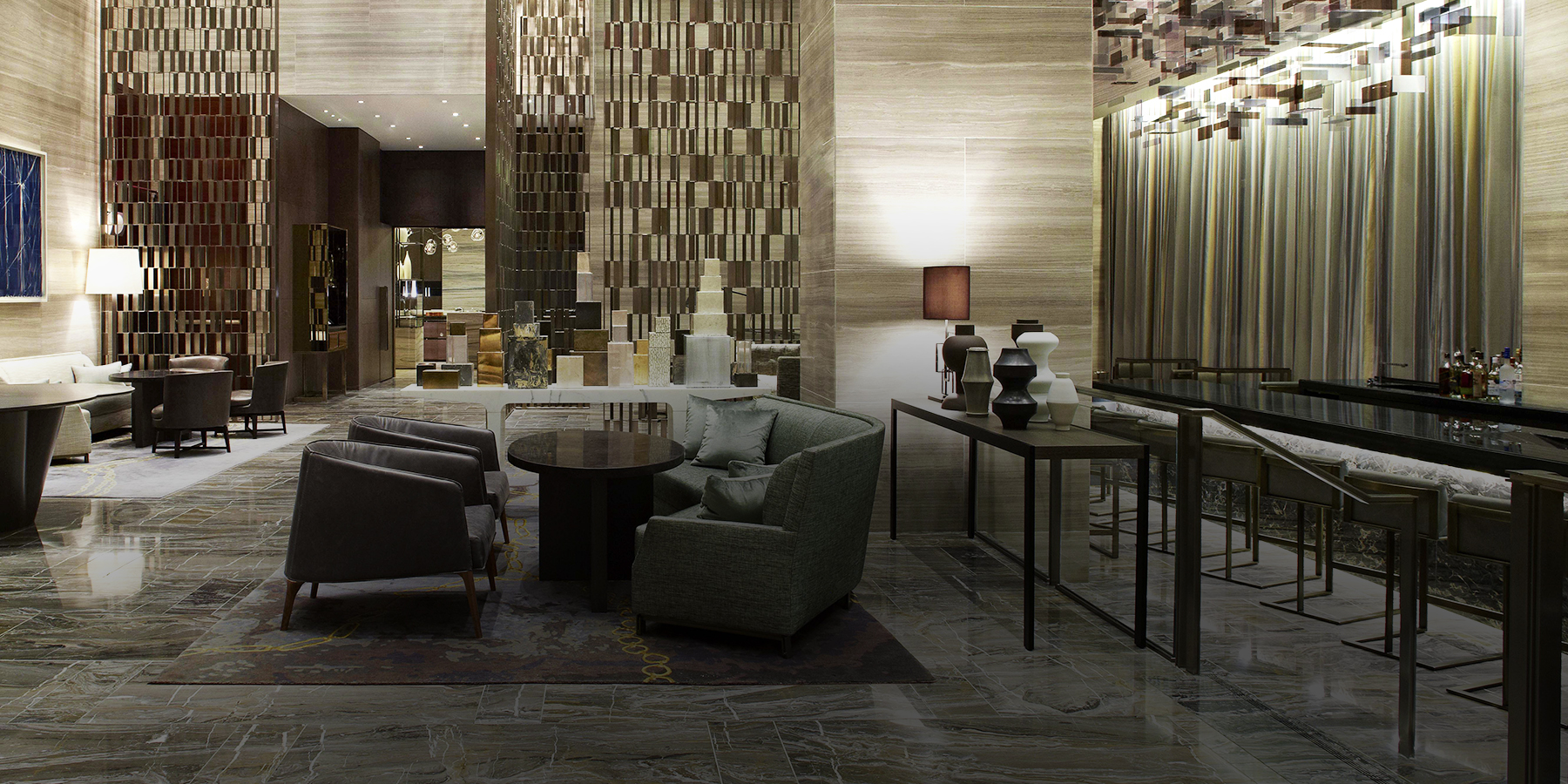 Midtown Manhattan’s recently opened Park Hyatt hotel, ensconced in a gleaming new 90-story skyscraper, has tout New York abuzz. Here, George Yabu and Glenn Pushelberg, the designers charged with creating its interiors, share the inside scoop behind their sleek and sumptuous scheme — and reveal how to bring the look home with items on 1stdibs. 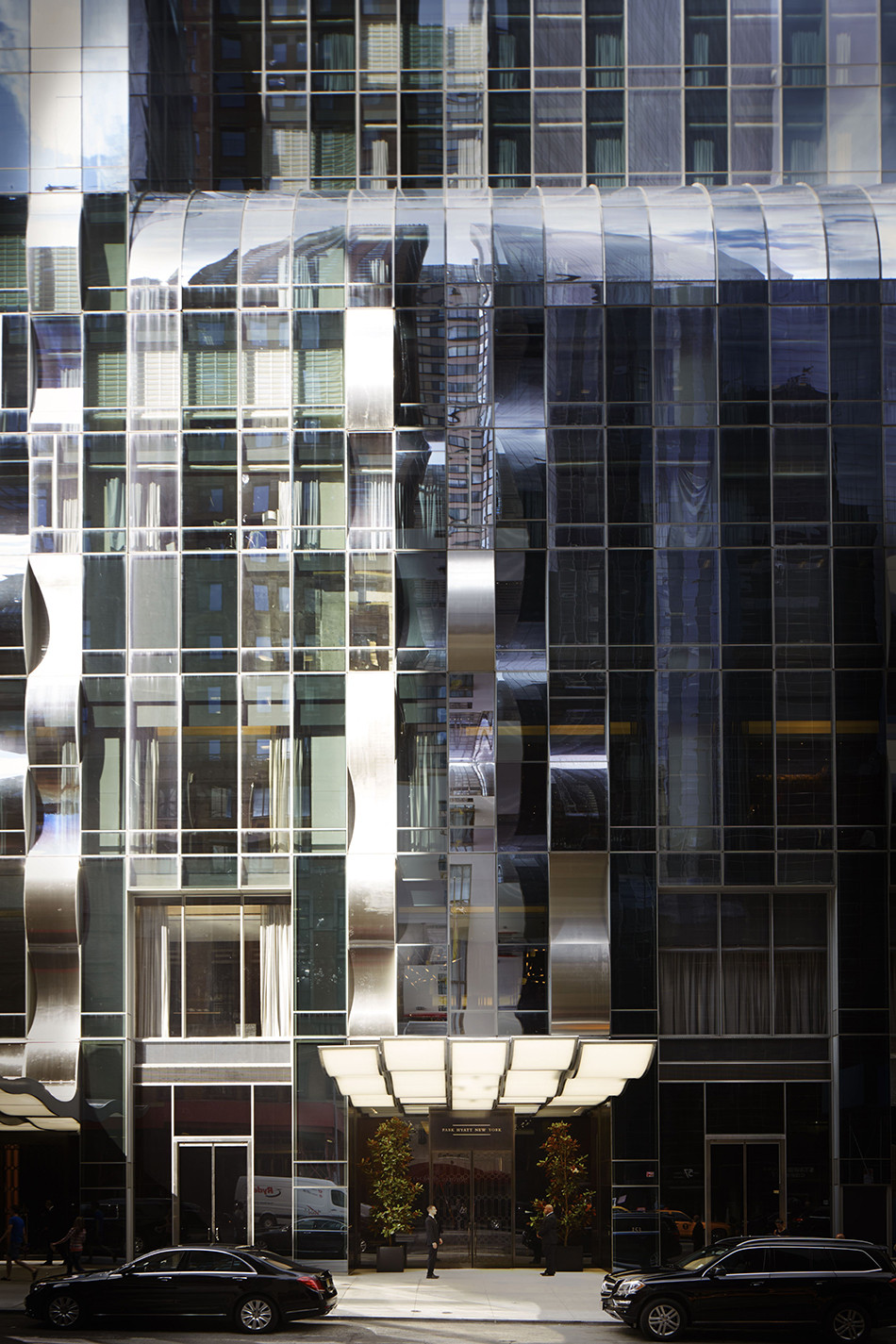 If there’s a hotel company that defines clean-lined, contemporary cool for the 21st century, it may well be Park Hyatt. From Chicago to Istanbul, the brand’s properties regularly win raves from all corners of the creative community. Despite its international reach, however, Park Hyatt has never had a New York outpost — until now. Last summer, its much-anticipated New York flagship finally opened on the first 25 floors of One57, the shimmering new skyscraper just across West 57th Street from Carnegie Hall.

From its 210 rooms and suites to its restaurant and bar to its 25th-floor spa and triple-height indoor pool area, the duo’s appealingly masculine, mid-century–inspired design for the Park Hyatt New York is awash in luxe fabrics, burnished metals, dark hardwoods and acres of richly grained marble and onyx in shades of cream, brown and gray. Floor-to-ceiling windows, custom lighting and furnishings plus 350 works of largely American contemporary art complete the look.

Here, Yabu and Pushelberg share the story (and a few secrets) behind their design and select items from the 1stdibs inventory to bring the look home. 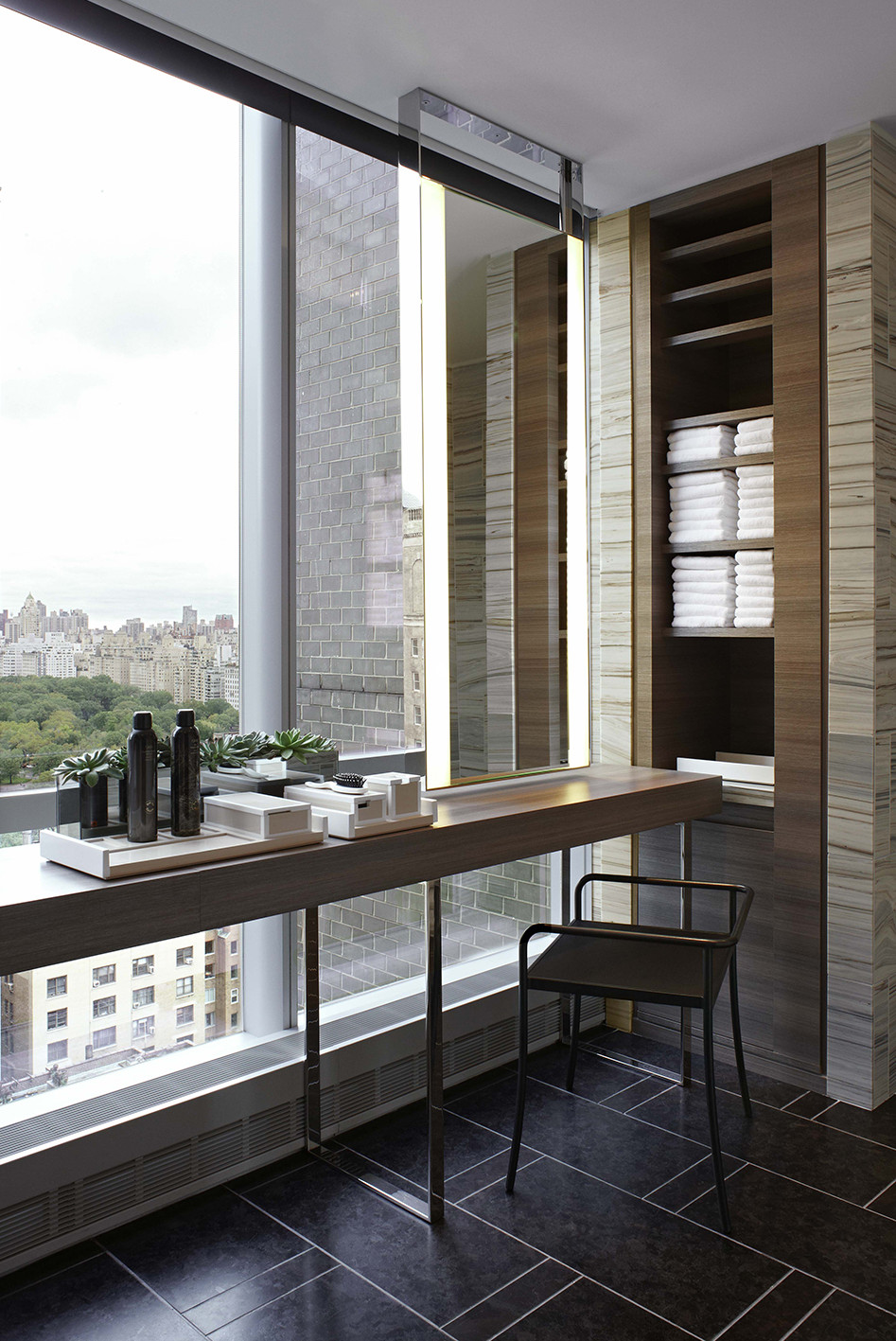 Floor-to-ceiling windows on the north side of the hotel open to expansive views of Central Park and the buildings surrounding it. Photo by Evan Dion

Our goal was to create the ultimate Park Hyatt: a flagship hotel that made manifest all of the things that Park Hyatt represents, while also intrinsically feeling like it belonged in New York.

While designing the hotel, we created a narrative about a couple born and raised in New York, and we conceived the hotel as a series of rooms in their grand Manhattan apartment. The fictive couple are well-to-do Upper East Side-dwellers who collect contemporary art, furniture and objects. Embracing the new as well as the old, they’re not really tied to one era of style and have a knack for combining colors and patterns in a confident manner. Through this narrative, we were able to make the Park Hyatt feel intimate, embodying the essence of the city and the pleasures of being in a polished New York home.

We wanted to capture the past glories of New York in a fresh and modern way, particularly those from several luminous decades — the glamour of the 1940s and the modern and experimental movements of the ’50s and ’60s. 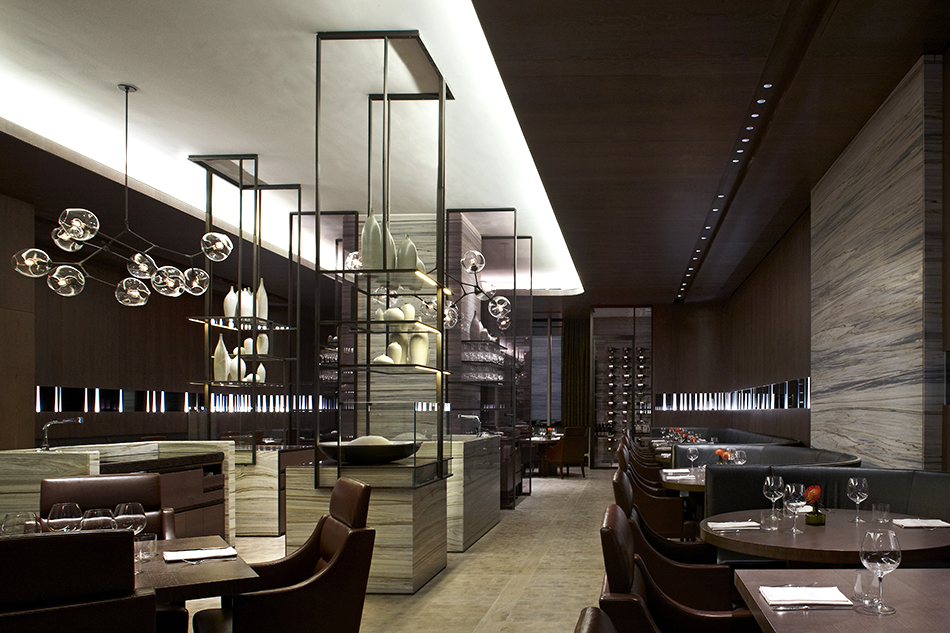 The Park Hyatt’s restaurant, the Back Room, shows off the hotel’s overall palette, which Yabu and Pushelberg describe as “cool and warm . . . masculine and strong yet soothing.” Photo courtesy Park Hyatt New York 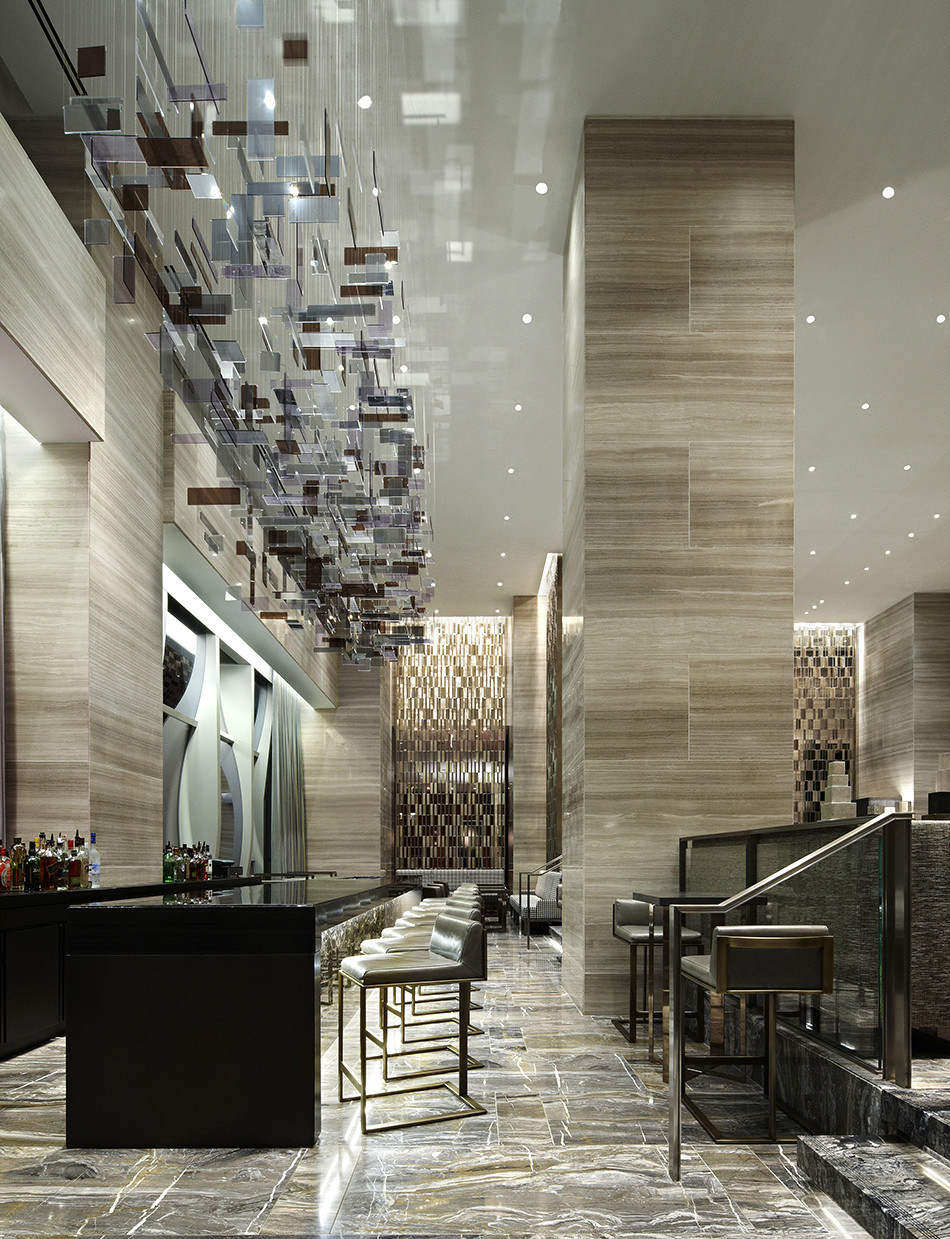 We love the carved Bianco Piove radius stone baseboards in the public washrooms.

We decided not to do a business center — which is usually the “technology hub” in a hotel. Instead, we created a quiet salon and lounge space where people can hold casual meetings and work on their personal devices and mobiles.

We commissioned artisans and craftsmen we know to create all of the accessories in the hotel. Larger custom pieces include the mobile sculpture above the lobby bar, which is by the Japanese design outfit Studio Sawada, and the metal sculpture in the spa, done by Toronto’s UnitFive Design.

We worked with an art consultant, Art & Advisory, and they did an outstanding job choosing works by new and established artists for the hotel. They brought in a lot of New York– and U.S.-based artists, which we thought was fitting for our design story. There’s a nice balance of up-and-coming artists, such as Johannes VanDerBeek (Ancestor (Colossus), 2012) and Karl Haendel (Scribble Mirror, 2011), with more established artists, like Richard Serra (Between the Torus and the Spear V, 2006) and Ellsworth Kelly (Wild Grape Leaves I, 2004). When you mix these artists, who are at different points of their careers, together in the same space, their pieces can have an interesting and positive effect on one another.

We were able to make the Park Hyatt feel intimate, embodying the essence of the city and the pleasures of being in a polished New York home. 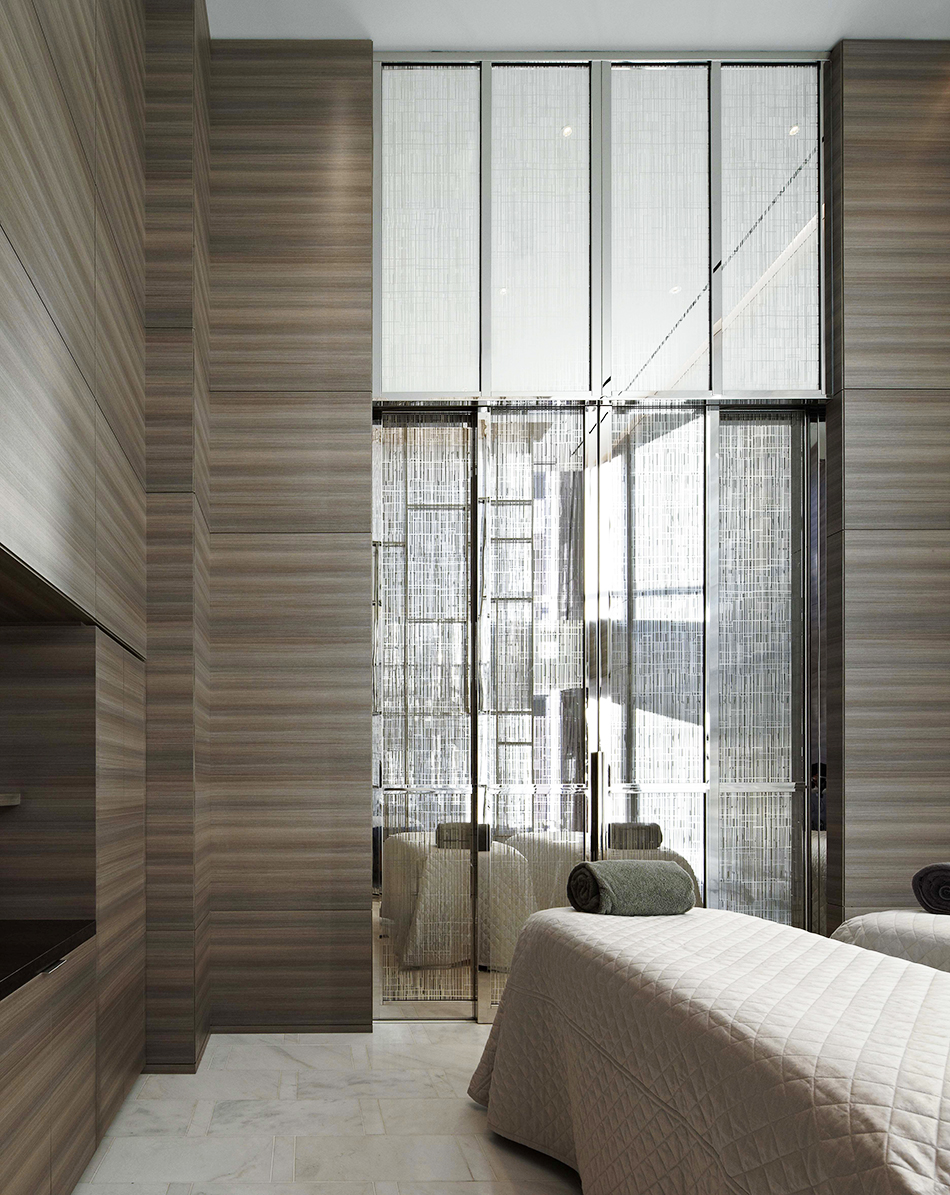 The 25th-floor spa’s Treatment Room for Two is one of the designers’ favorite spaces in the hotel, not least of all because of its high ceilings. Photo by Evan Dion

The Room to Book:

One of the West Side Suites. They’re corner suites offered on every floor of the hotel, but the ones on floors 8 to 15 offer fantastic views of 57th Street and the Carnegie Hall façade, putting New York in the palm of your hand.

And then, in the spa, the Treatment Room for Two: It has soaring ceilings and incredible windows that look out to the streets of New York. There’s also a rainfall showerhead mounted 18 feet high. By the time the water hits you, it’s like a deluge similar to a heavy tropical rain shower.

There’s a beautiful custom-made traveling trunk in each guestroom. When you open it, you’ll find a safe and carefully detailed drawers and shelves made from leather.

The Comforts of Home:

The hand-painted pantries in each room; they’re beautiful, chic and very residential.