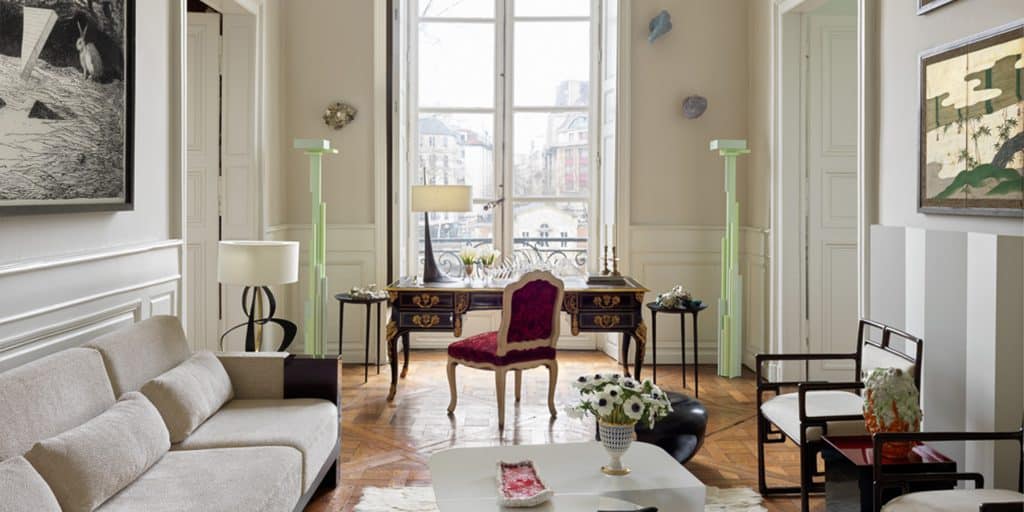 The furniture designer and his fashion-world husband have decorated their Parisian pied-à-terre with an artfully arranged assemblage of covetable pieces both old and new. 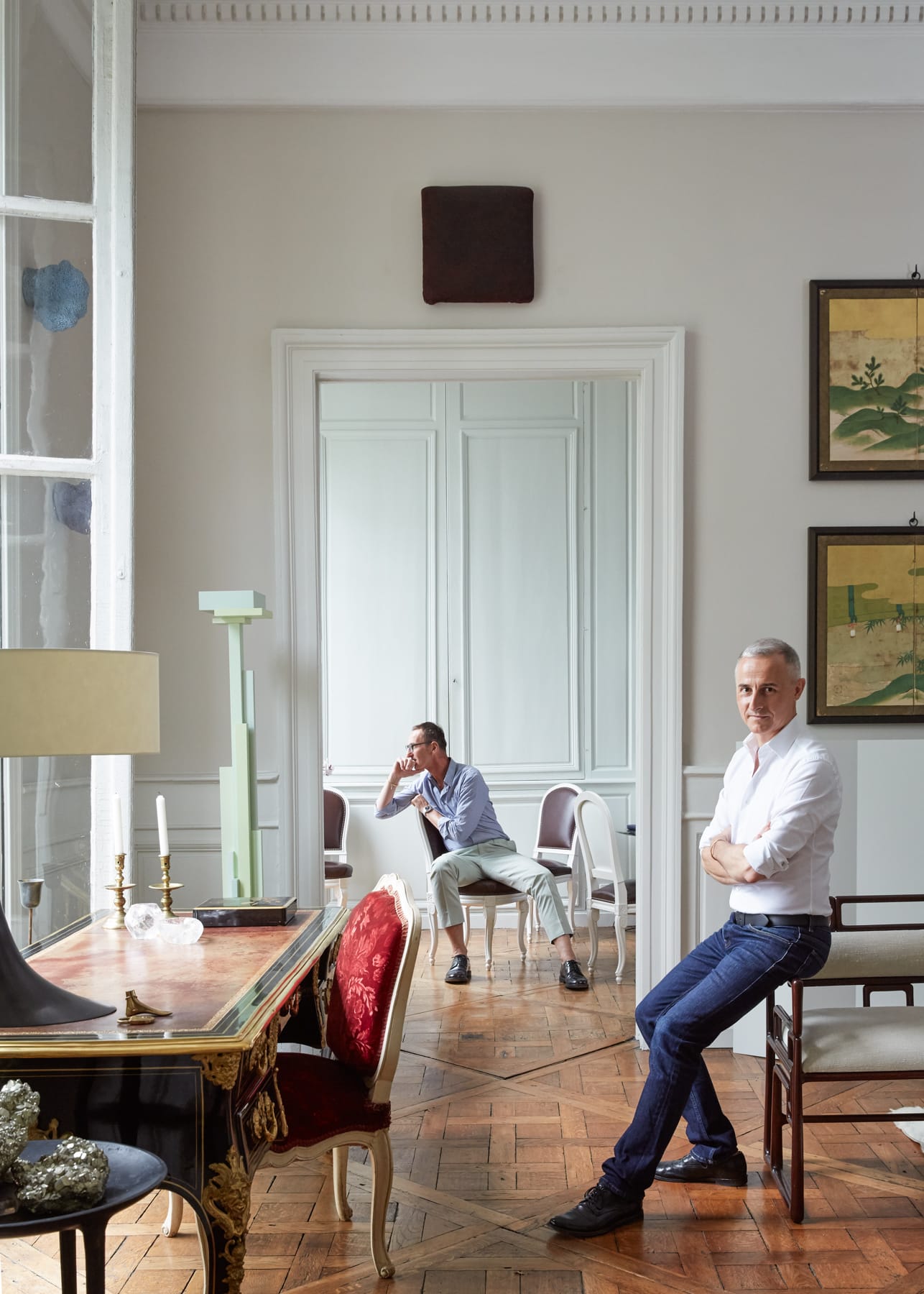 When furniture designer Hervé Van der Straeten and his husband, Bruno Frisoni, decided to sell their loft-like apartment in Paris’s 12th arrondissement, they set out looking for something different. “We wanted an experience we’d never had before,” says Van der Straeten. What they found was a 1,750-square-foot one-bedroom apartment on the Île Saint-Louis, right in the center of the city. The building in which it is situated has cultural as well as historic resonance: Constructed in the mid-17th century, it was home to famed Barbizon School painter Charles-François Daubigny in the mid 180os. The apartment appealed to Van der Straeten particularly because of its exquisite proportions and soaring, 14-foot-high ceilings, plus its location directly on the banks of the Seine. “The proximity to the water gives it an incredible charm,” says the designer.

Frisoni, a shoe designer, is best known for being the artistic director of Roger Vivier — a role he held for some 16 years before leaving the company early last year. During his tenure there, his clientele encompassed celebrities like Cate Blanchett, Scarlett Johansson and Jessica Alba. As for Van der Straeten, he’s in a league of his own when it comes to furniture design. Since opening his showroom in the Marais district in 1998, he has developed a fervent following, including such leading decorators as Brian Murphy, Hubert Zandberg and Ernest de la Torre. Van der Straeten also has his own atelier, housed in a former electronics-component factory in the Parisian suburb of Bagnolet. His creations can be organic and whimsical or dazzlingly geometric. They can be made with noble materials like lacquer, bronze and wood marquetry or with funkier ones like colored stainless steel and Lucite. But they all share two qualities: a peerless originality and breathtaking artisanal virtuosity. “Hervé is an iconoclast within the industry,” says New York–based interior designer Tony Ingrao. “His body of work exemplifies refined traditional French craftsmanship imbued with forward-thinking approaches. It is incomparable and distinctive, always sophisticated.” 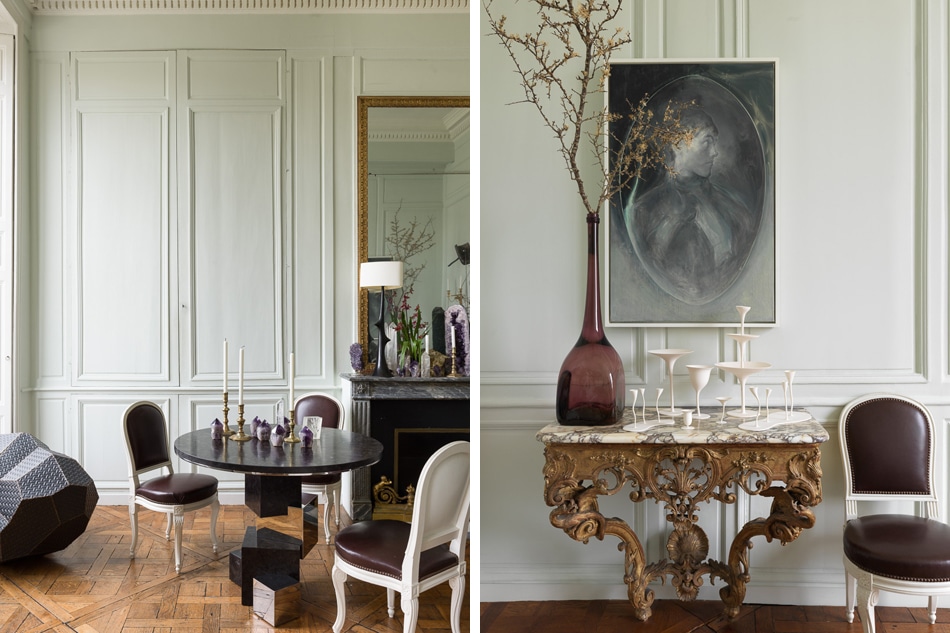 Left: In the dining room, 18th-century-style chairs surround Van der Straeten’s Perturbation table, to the left of which sits a Pierre Malphettes sculpture titled Un Rocher. Right: My Student, a 2012 Mao Yan painting, hangs over a Regency console on top of which stand a glass vase from the 1970s and a series of ceramic pieces created by Andrea Branzi for Sèvres-Cité de la Céramique. 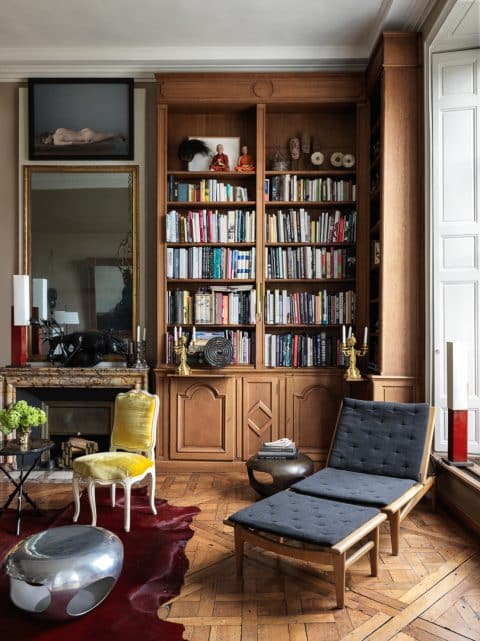 The library’s daybed and ottoman were designed by Hans Wegner in 1964 and manufactured by Getama. In front of the fireplace is one of Van der Straeten’s Épines occasional tables and a Louis XV chair from a Paris flea market. The red table lamps at far left and right and the polished, pod-like stool-tables are all also by Van der Straeten.

In the decoration of the couple’s various homes (they also have houses in Burgundy and Tangier), Van der Straeten takes the leading role. “As he’s in the interior design world, it makes more sense,” remarks Frisoni. “I prefer to let him come up with ideas. Afterward, things fall into place quite organically with lots of discussion.”

The pair did very little work in the Île Saint-Louis apartment. They simply repainted the walls, which were formerly what Van der Straeten describes as a “cold white,” mostly substituting neutral tones like cream, a pale aqua green and a pinkish beige. “As we already had quite a lot of paintings and strong pieces of furniture, we wanted them to take center stage,” explains Van der Straeten. The one exception is the small bedroom, which they decided to make even cozier with a dark chocolate hue. “We wanted it really to be like a sensorial chamber,” he says.

Not surprisingly, Van der Straeten filled the interiors largely with his own creations. These include his angular, origami-like Réaction mirror, in the library; his Chinese-inspired Shanghai armchairs, in the living room; and, in the dining room, his Perturbation table, whose base is composed of stainless-steel cubes stacked in higgledy-piggledy fashion.

If there is one thing Van der Straeten detests in an interior, it is uniformity. “I like bringing elements together that, on the face of things, are contradictory,” he states. “It’s interesting juxtapositions that make a decor sing.” 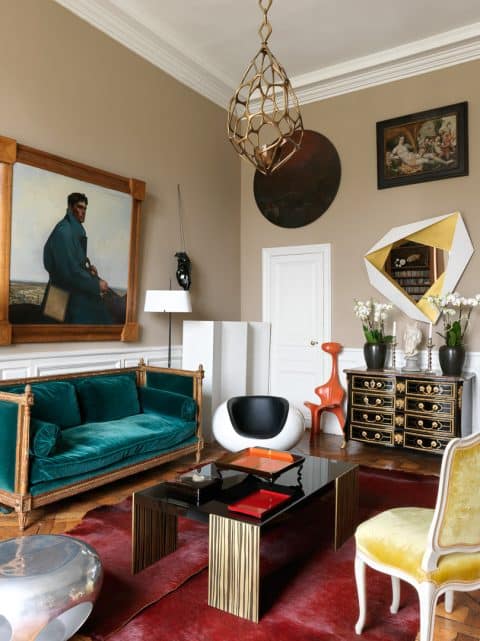 Elsewhere in the library, a 1927 René-George Gautier painting, Officier de cavalerie — given by Frisoni to Van der Straeten for the latter’s 50th birthday — holds pride of place above a Louis XVI sofa. To its right are an Eero Aarnio–style seat, ca. 1970, and Günter Beltzig’s Floris chair, 1967.

The mix he has concocted here features a contemporary brushed and lacquered aluminum coffee table by Pierre Charpin shaped like an airplane wing, as well as such quirky 20th-century items as a pair of almost anthropomorphic orange lacquered-fiberglass Floris chairs, conceived in 1967 by the German designer Günter Beltzig. The most striking pieces, however, may well be the oldest, including a French Regency desk, a classical giltwood console table and an early-18th-century chest of drawers made of lacquered wood, marble and bronze. “I like to imagine the lives of all these creations and of their different owners,” Van der Straeten says. “An antique automatically has a story to tell.”

For Ingrao, the designer’s work, by its very nature, lends itself to being combined with pieces of disparate styles. “It transcends boundaries,” he explains. “It simply cannot be anchored to a specific era, as it reflects the past, the present and the future all at once.”

Van der Straeten and Frisoni’s approach to art is similarly eclectic. Works in the Île Saint-Louis apartment range from a 16th-century Flemish canvas depicting Venus and the Four Seasons to one of Massimo Vitali’s iconic beach photos and a rock-like sculpture in metal by Pierre Malphettes.  “We generally buy things very quickly and without regret,” says Frisoni. “It’s more a question of instinct than something thought through.”

A perfect example is the portrait of a cavalry officer in the library, which was painted in 1927 by an artist named René-George Gautier. Frisoni discovered the work at a Christie’s auction and gave it to Van der Straeten for his 50th birthday. “It’s quite a distinctive, elegant portrait and at the same time very masculine,” Frisoni says. “I didn’t have to think twice.” The pair of panels from an 18th-century Japanese screen in the living room, meanwhile, reflects Van der Straeten’s love of the Land of the Rising Sun. “It’s a country that’s always inspired me in terms of its pared-down design and the quality of its craftsmanship,” he says. 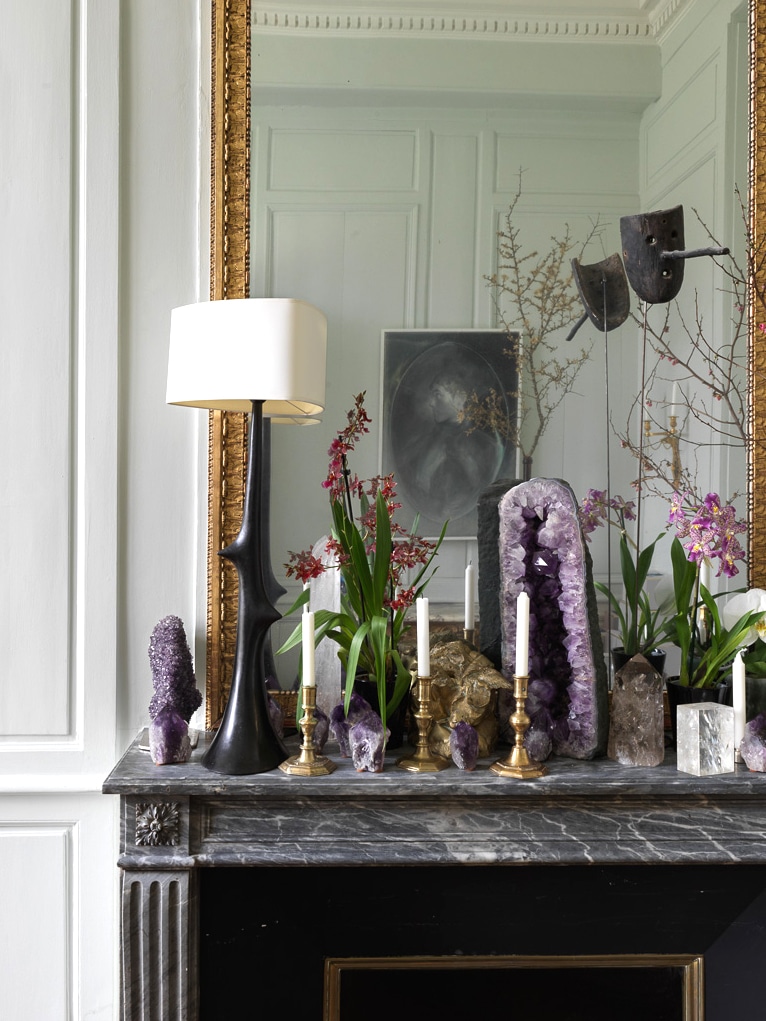 In the Paris apartment of furniture designer Hervé Van der Straeten and his husband, former Roger Vivier artistic director Bruno Frisoni, one of Van der Straeten’s own Épines table lamps sits amid orchids and amethyst geodes on a mantelpiece. 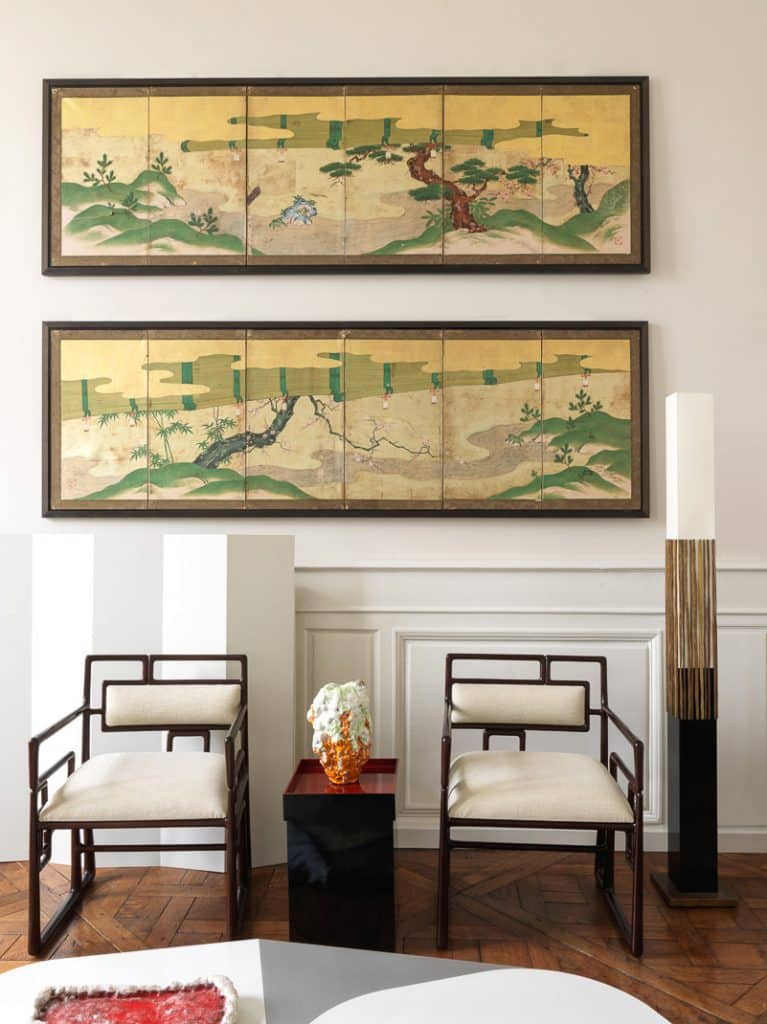 Panels from an 18th-century Japanese screen hang over a pair of Shanghai armchairs by Van der Straeten, who also designed the Baguette floor lamp to their right. The sculpture on the red-and-black-lacquered table between the seats is by Per B. Sundberg. 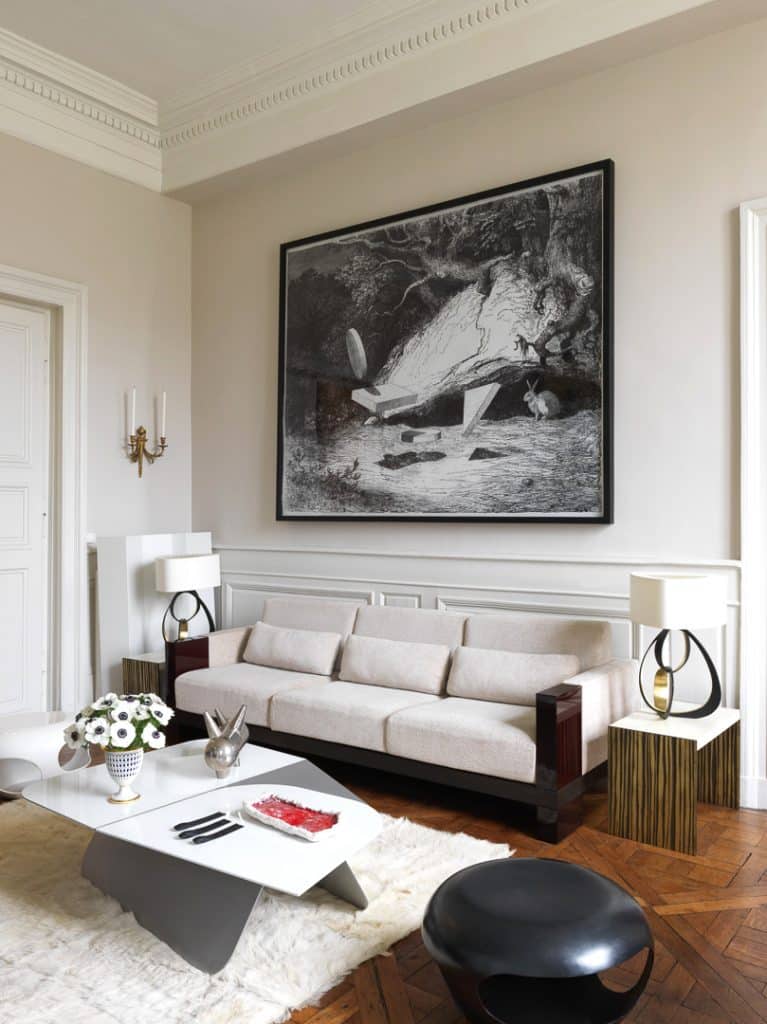 Over a Van der Straeten sofa is a pencil and ink drawing by Daniel Arsham. The tables and lamps flanking the sofa are also by Van der Straeten, while the coffee table is by Pierre Charpin. 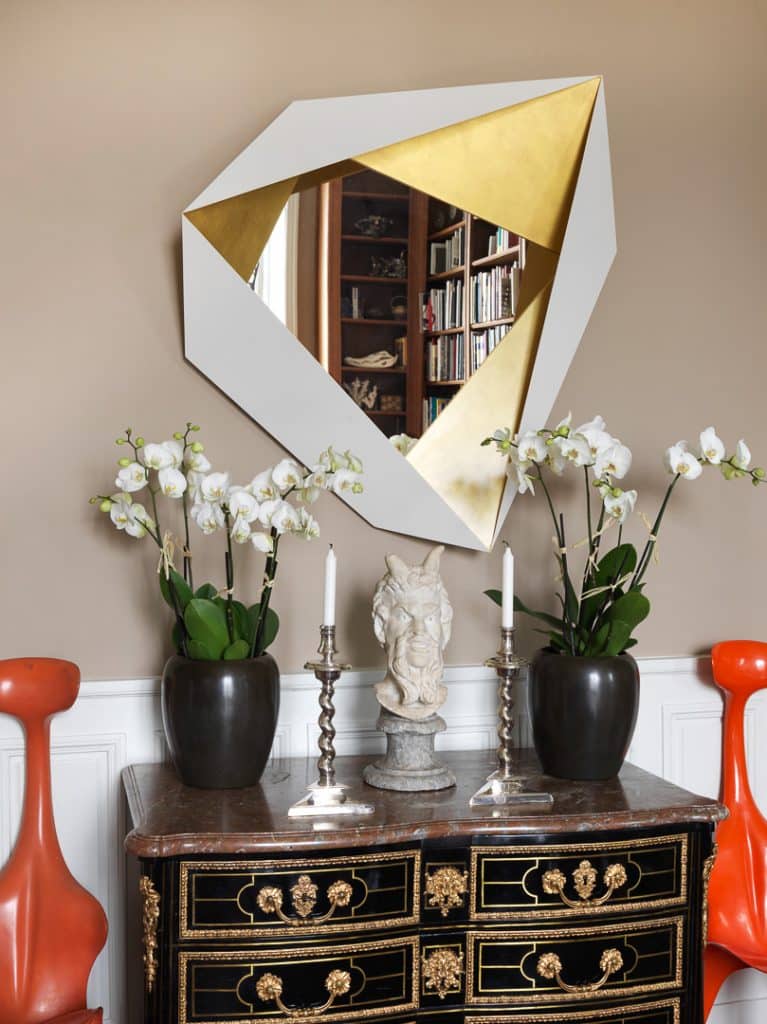 The apartment’s library features an early-18th-century commode displaying an Ancient Rome–inspired late-17th-century marble bust of Pan and 17th-century Spanish candlesticks. The orange chairs to either side are the 1967 Floris model by Günter Beltzig, and above is Van der Straeten’s Réaction mirror. 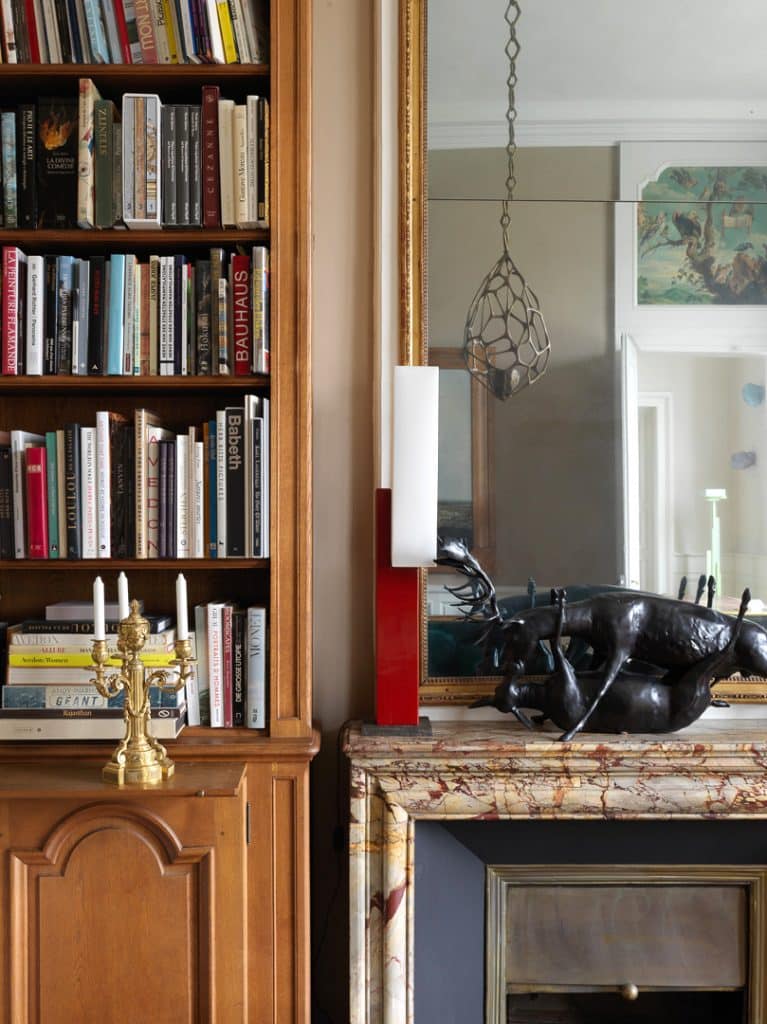 The library’s pair of gilt-bronze Louis XV candleholders, one of which is seen here, were designed by Jean-Charles Delafosse and date to ca. 1770. The red table light is Van der Straeten’s Lampe Chinoise, and the bronze sculpture is by Wim Delvoye. 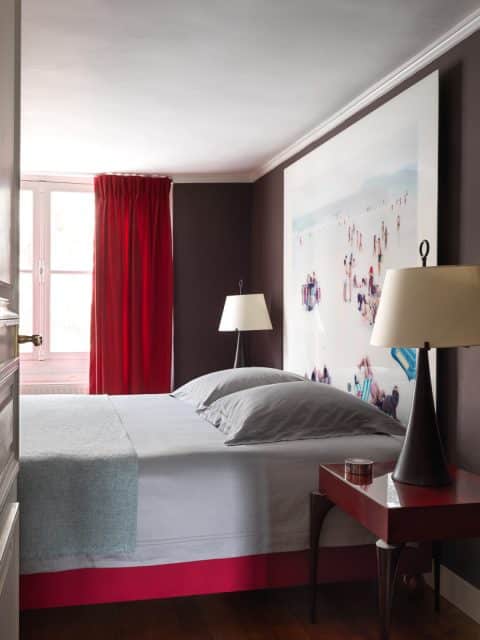 A Massimo Vitali beach photo serves as a sort of headboard in the bedroom. The bedside tables and the lamps atop them are all by Van der Straeten.

While the eye-catching proportions of the apartment are impressive, the couple does not favor formal living. “The flat has a traditional structure, but classical for me should mean excellence rather than something staid and boring,” says Frisoni. “We like to entertain, but in a more bohemian-chic fashion rather than anything too stiff.” Adds Van der Straeten, “We prefer having a buffet where people can eat off plates on their laps rather than a sit-down dinner.”

The designer’s favorite spot in the apartment is the Hans Wegner daybed in front of the library window — the perfect place for contemplating the Seine outside. “There’s a constant to-ing and fro-ing on the river,” he marvels. “You have everything from frogmen to swans, and even tango dancing at the café opposite in summer.”

The view doesn’t quite stretch to where Ingrao believes Van der Straeten’s work will end up one day.  “At the Louvre!” he declares. “I can assure you, it will be a part of every major museum!” 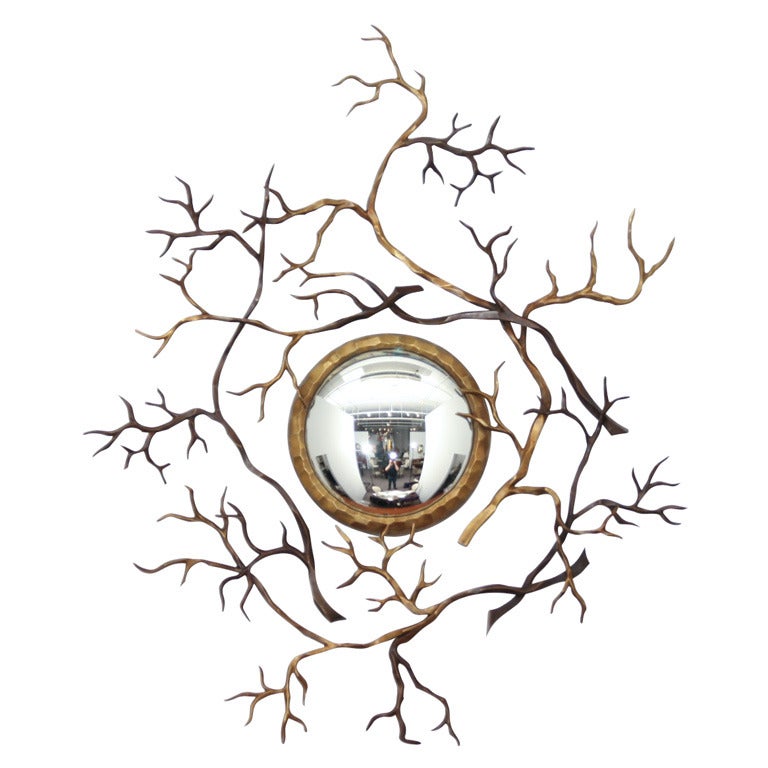 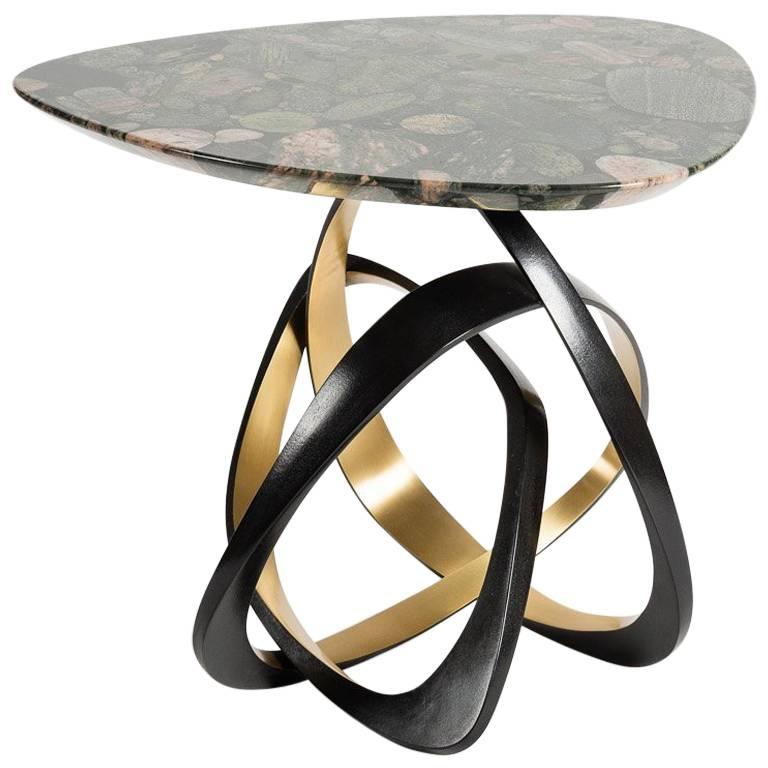 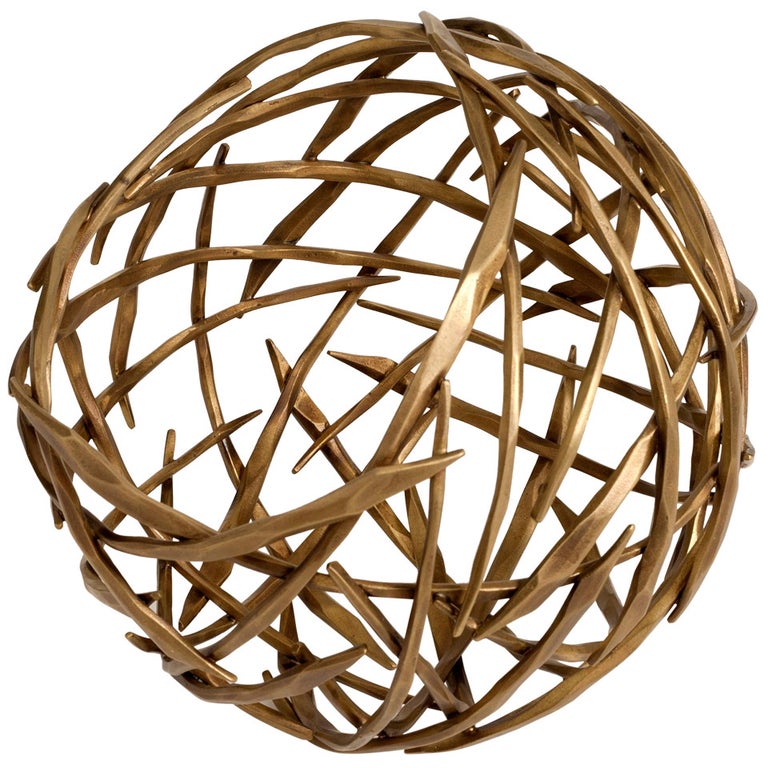 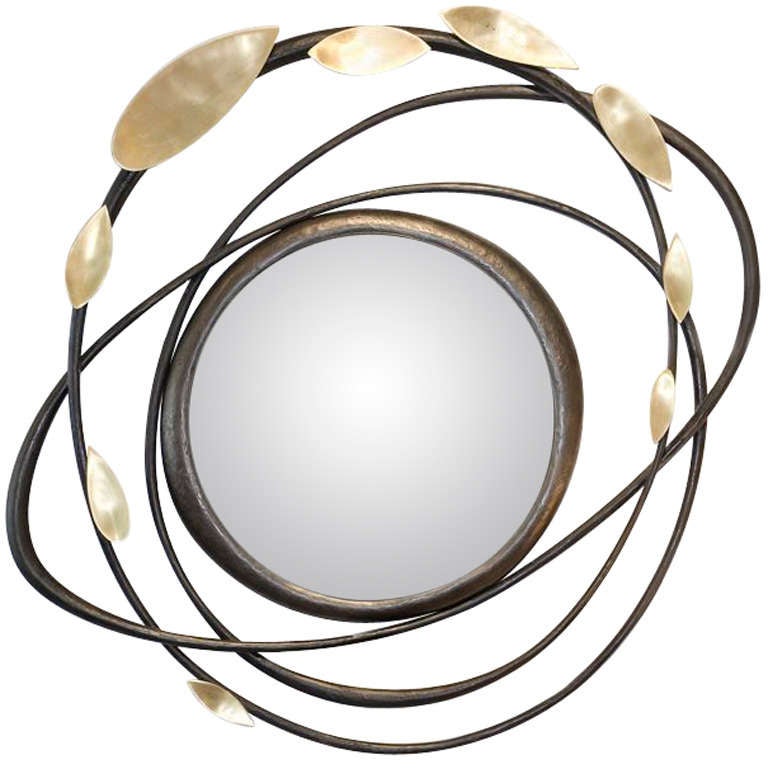 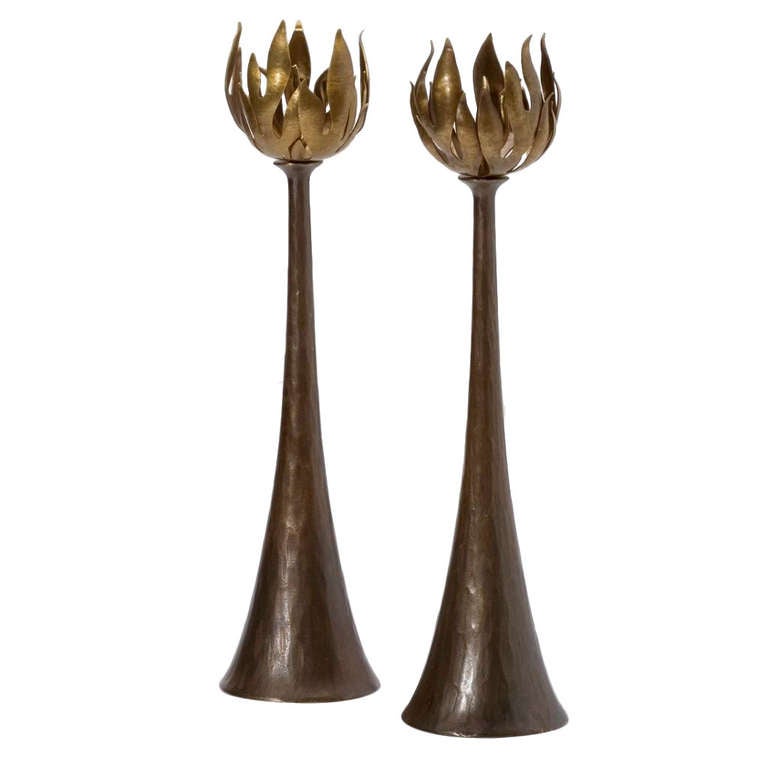 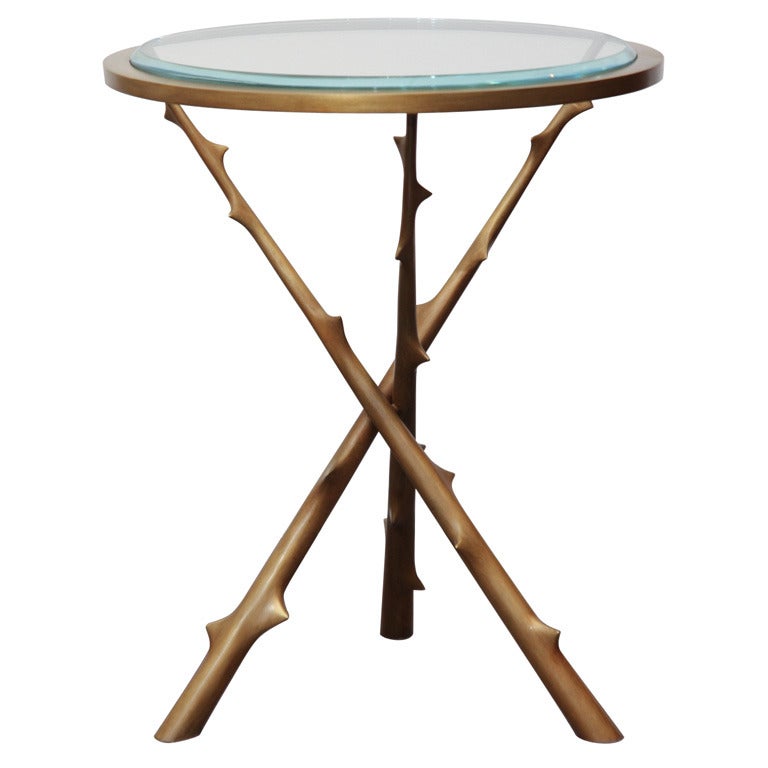 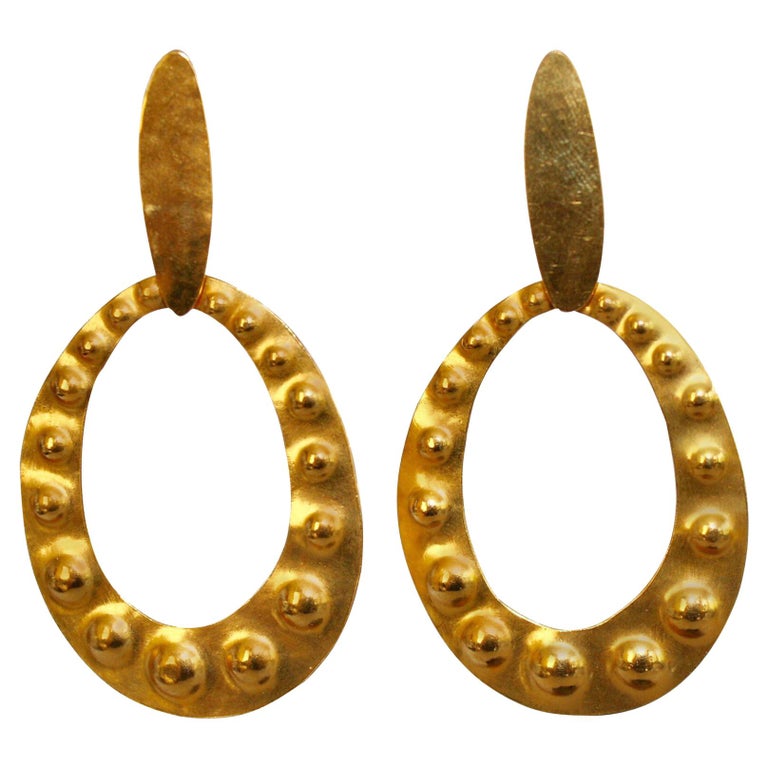 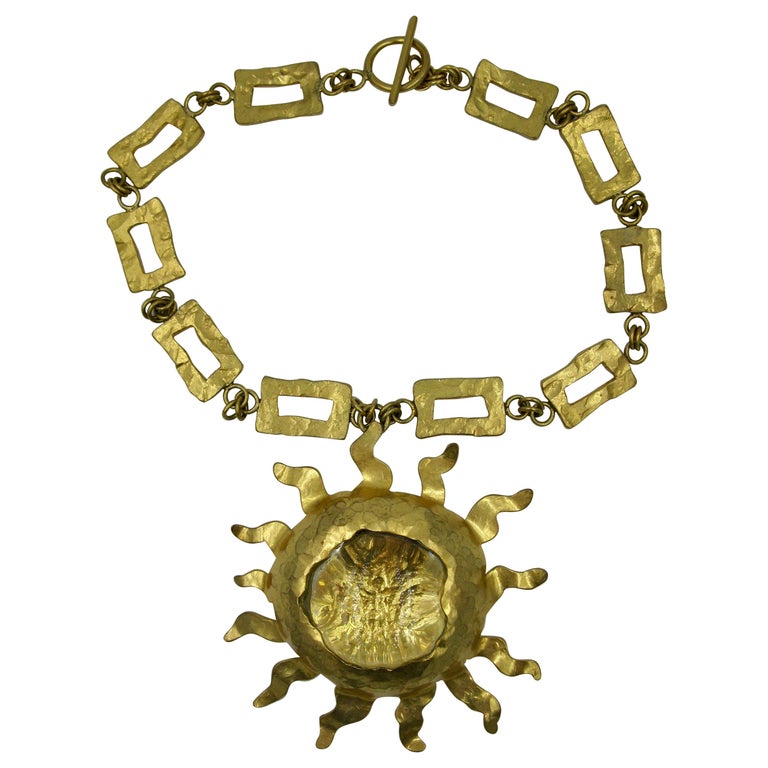