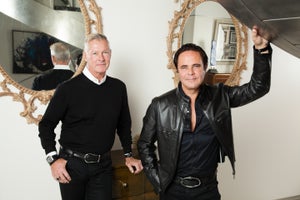 Anthony Ingrao and Randy Kemper principal Ingrao Inc., an internationally acclaimed architecture and design firm, established in 1982 and based in New York City. The firm is assisted by 36 designers and architects.

With projects all over the globe, Ingrao has not only redefined the world of modern luxury but has become a name synonymous with detail, quality and style. Their focus on forms of light, texture and scale, with their usage of unexpected or unique materials, create their inimitable spaces. The firm is widely known for private residential projects, such as townhouses in New York, mansions in Los Angeles and Santa Barbara, and ocean view homes in Hawaii, the Caribbean and Miami. Their projects are also found outside the US, including grand homes in Monaco, St. Tropez, Moscow, Saudi Arabia, Paris, and Hong Kong. Ingrao has designed private homes for Jack Welch, Kim Cattrall, Donnie Deutch, and Goldie Hawn, as well as many of the world's most influential financial power-brokers and real estate titans. Ingrao recently completed designing the Baccarat Residences in Manhattan. Notable current commercial work includes the Ward Village in Hawaii with Richard Meier and the Howard Hughes Corporation.

Ingrao Inc. has repeatedly been named to the AD100 list of the greatest talents in design today. They have not only been recognized by Architectural Digest globally, but have been featured in Elle Decor, Vogue, Hamptons Magazine, the New York Times, Beach Magazine, Interior Design Magazine, New York Magazine, Avenue, design & architecture books, news articles and blogs over the internet.